We may have finally turned the corner! Our temperatures have been challenging with a couple really warm days, some sleety snow and several hard freezes. There has been a mix of 'winter' birds and new first of year (FOY) birds as well.

Two Yellow-bellied Sapsuckers flew in to the same tree very briefly on Tuesday, 4-10-18. 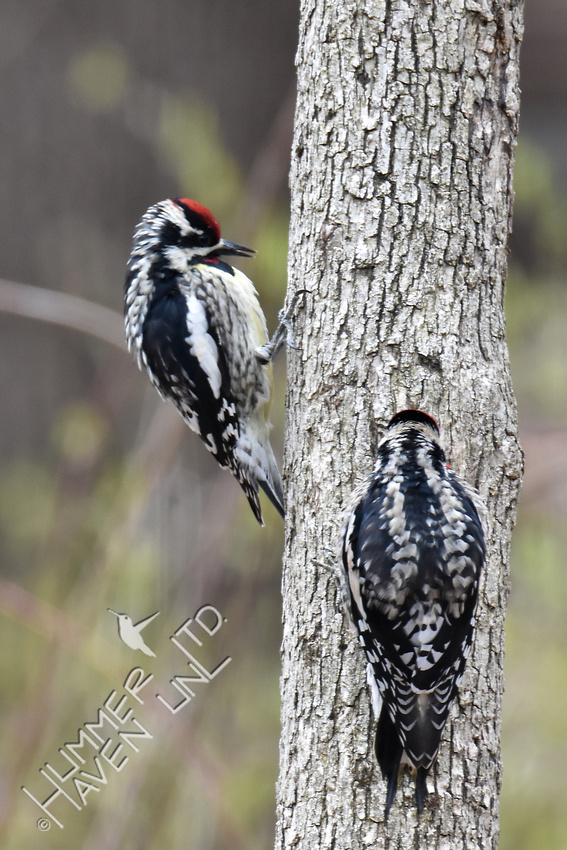 The Eastern Phoebe perched in the Spicebush (Lindera benzoin) while it was in bloom last Sunday, 4-15-18. 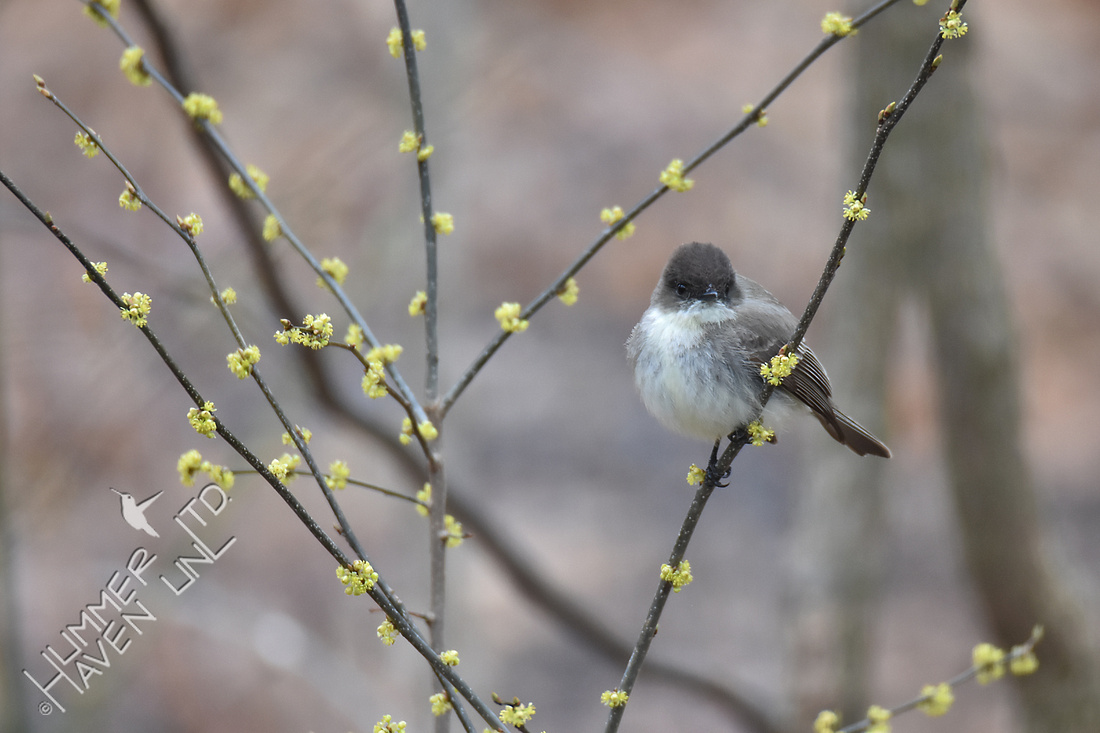 This FOY Chipping Sparrow was foraging in the sleet shower on Monday, 4-16-18. One has been seen several times since then. 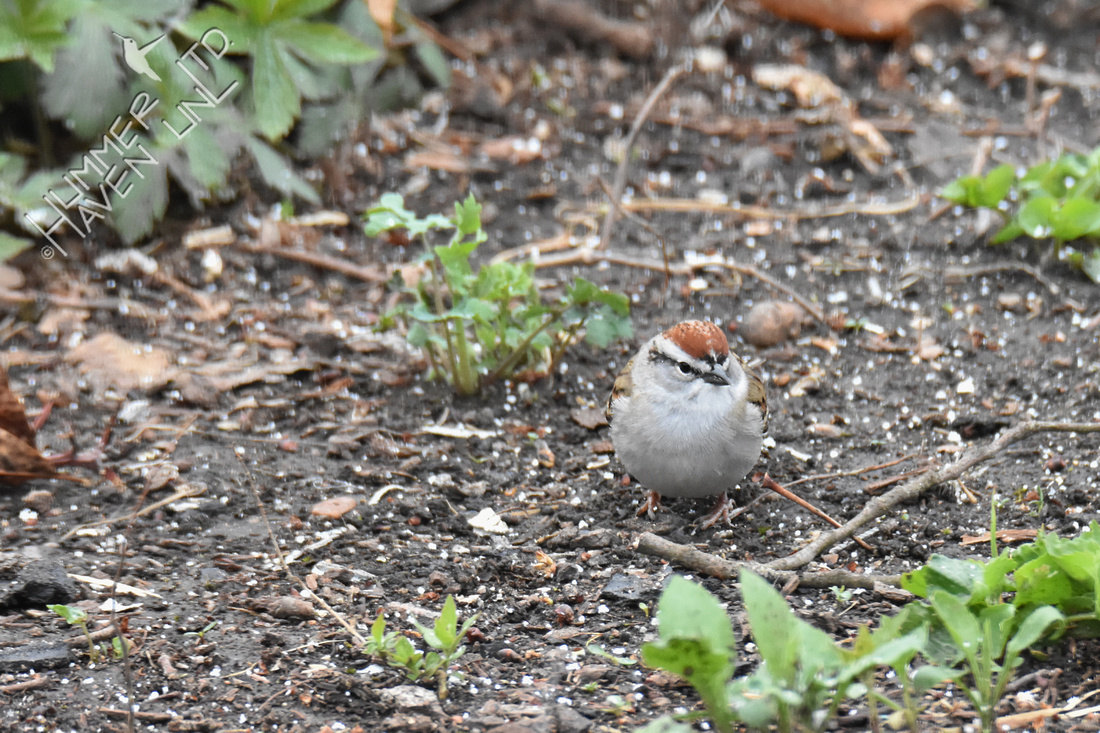 There have been several Yellow-rumped Warblers around this past week. They are considered a winter resident but we'll be seeing them for a while yet until they move north to Canada to breed. One of these warblers really likes peanut chips! Another found a tasty insect for a meal. 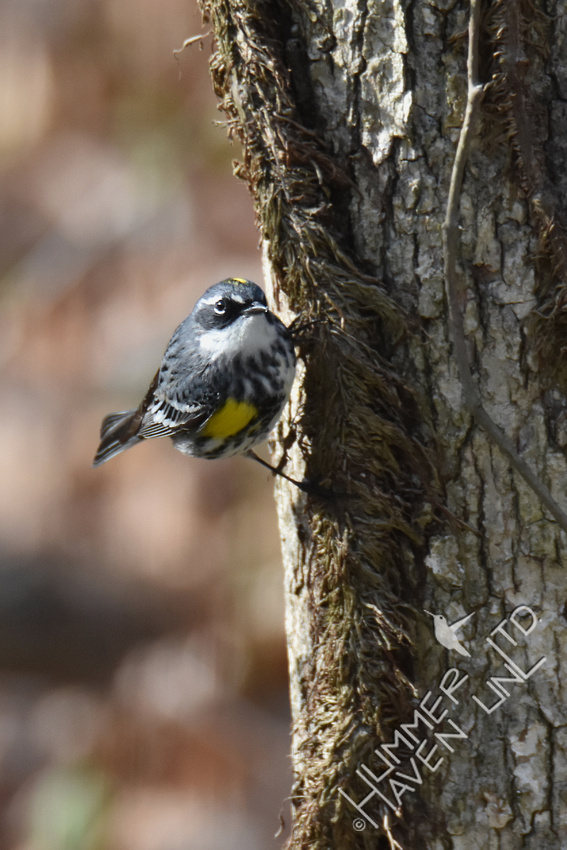 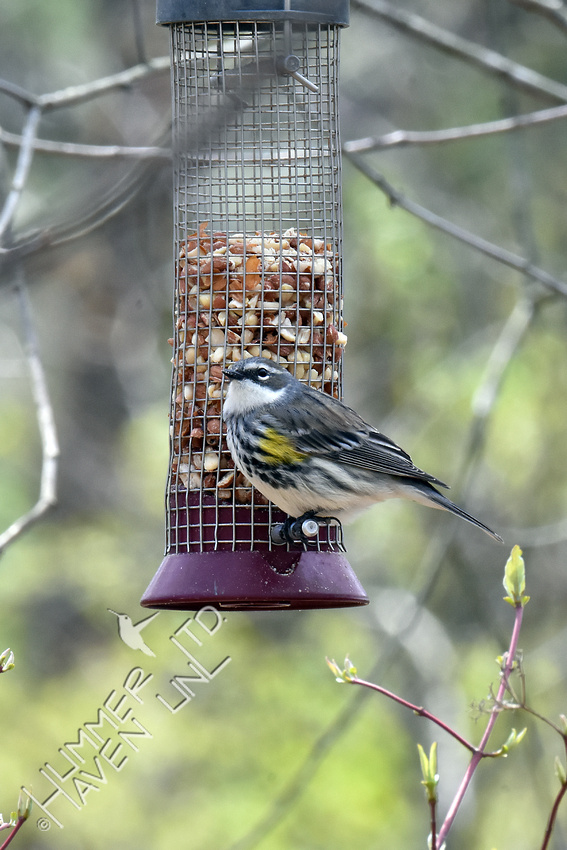 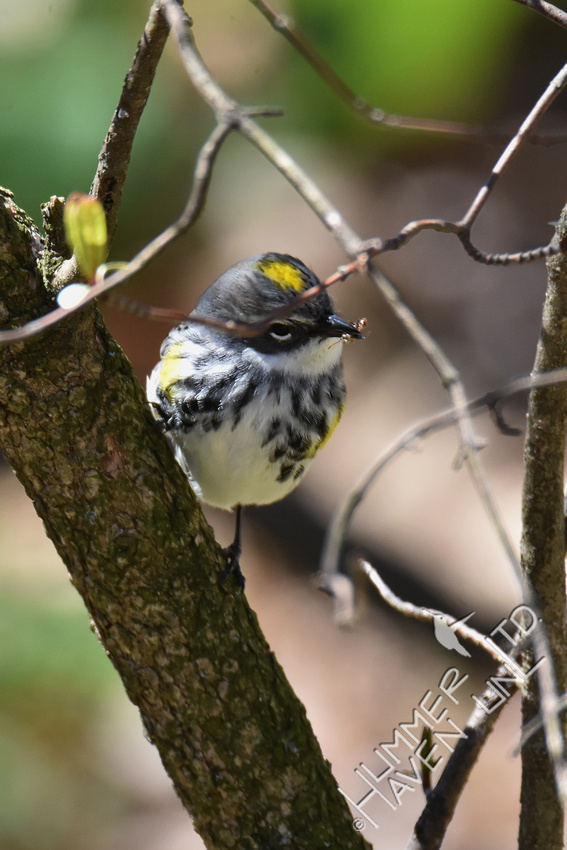 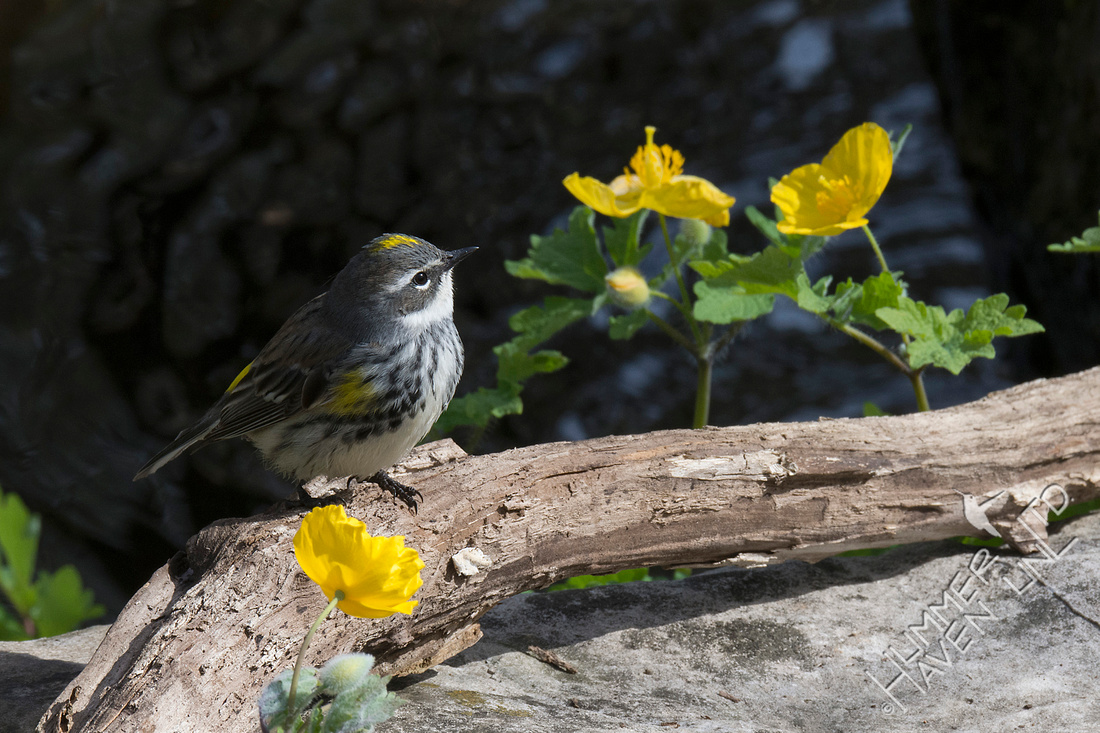 A Brown-headed Cowbird has been coming to bathe in the afternoons.  This is the first year I've seen a male of this species get in the basin. 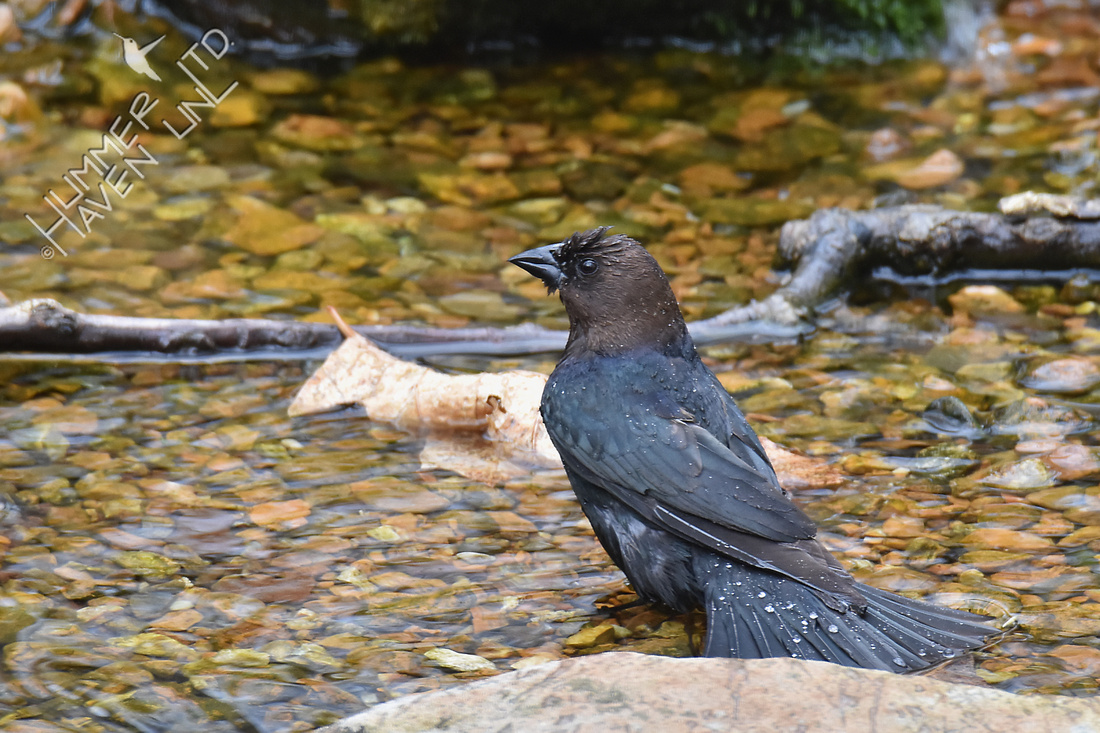 Ruby-crowned Kinglets have also returned from a short distance south. There have been a couple of them chasing each other around the last few days. 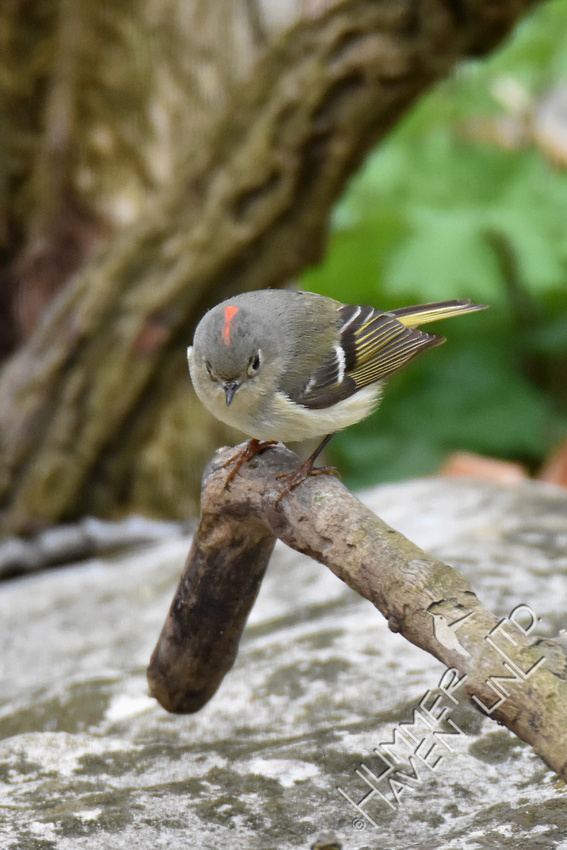 And, yes, it's time to put up your hummingbird feeders!  The first male returned on Thursday, 4-19-18.  I saw a second male at a favorite feeder today! 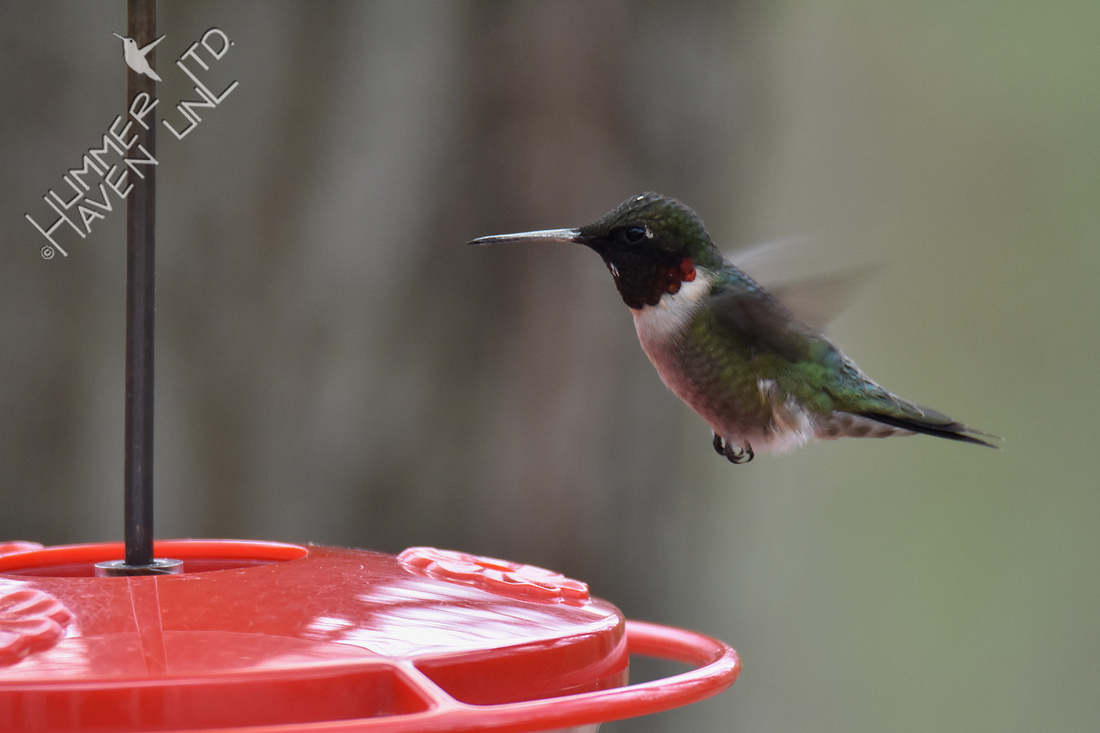 The hummers have also been enjoying the nectar of the Virginia Bluebells (Mertensia virginica). 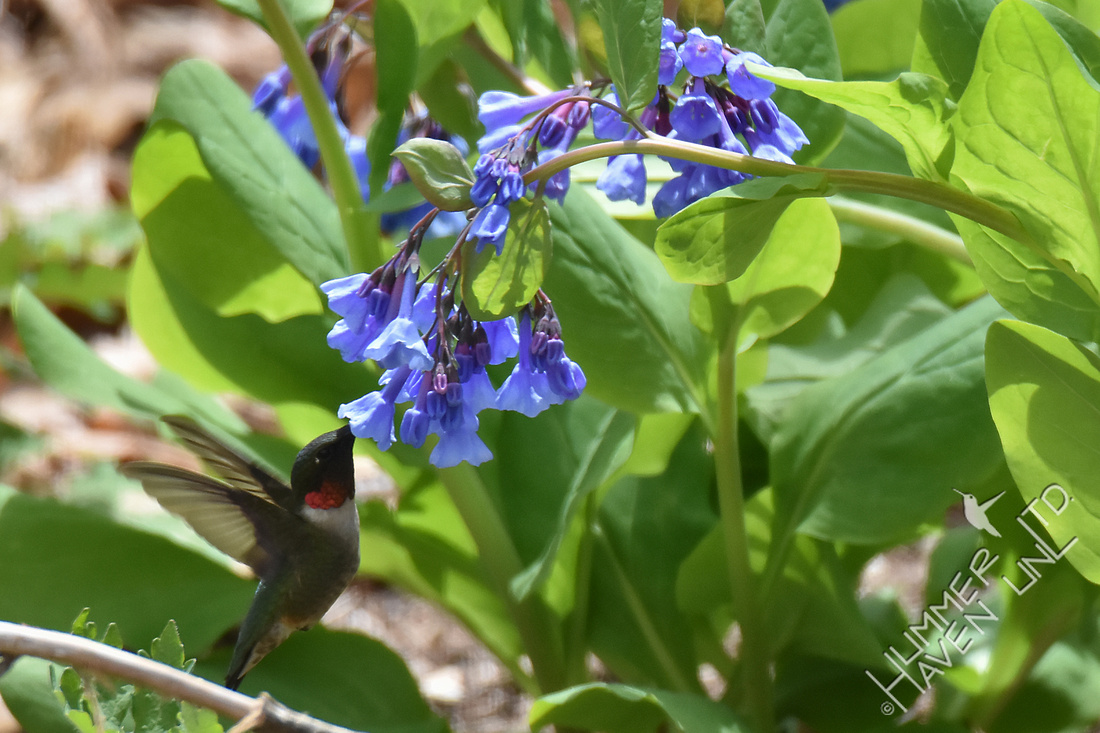 On Friday, 4-20-18, a Golden-crowned Kinglet popped out of the Golden Currant (Ribes odoratum), how fitting, and landed on a stone near the pond. 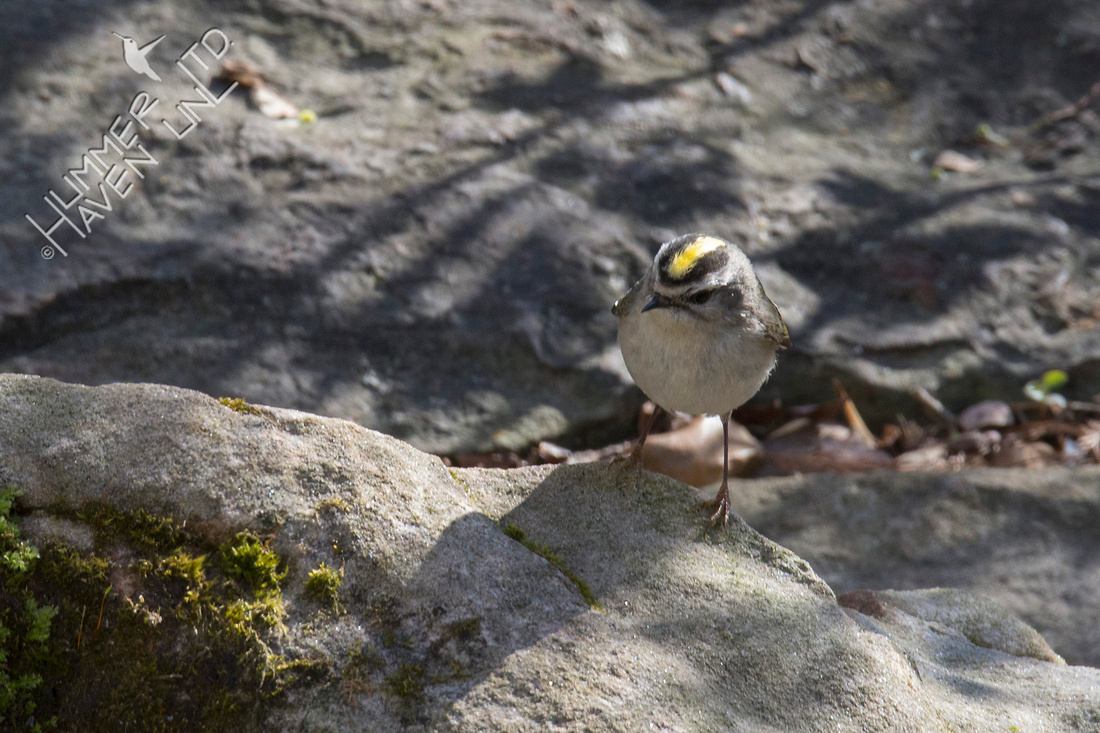 Another small bird was foraging nearby, a FOY Blue-gray Gnatcatcher! Early on Saturday, 4-21-18, I went out to hose off the Bubbler and heard a soft "teesi-teesi-teesi" and found a FOY warbler, a Black and White. It was climbing up the Shingle Oak (Quercus imbricaria) near the driveway. It moved on to the west. 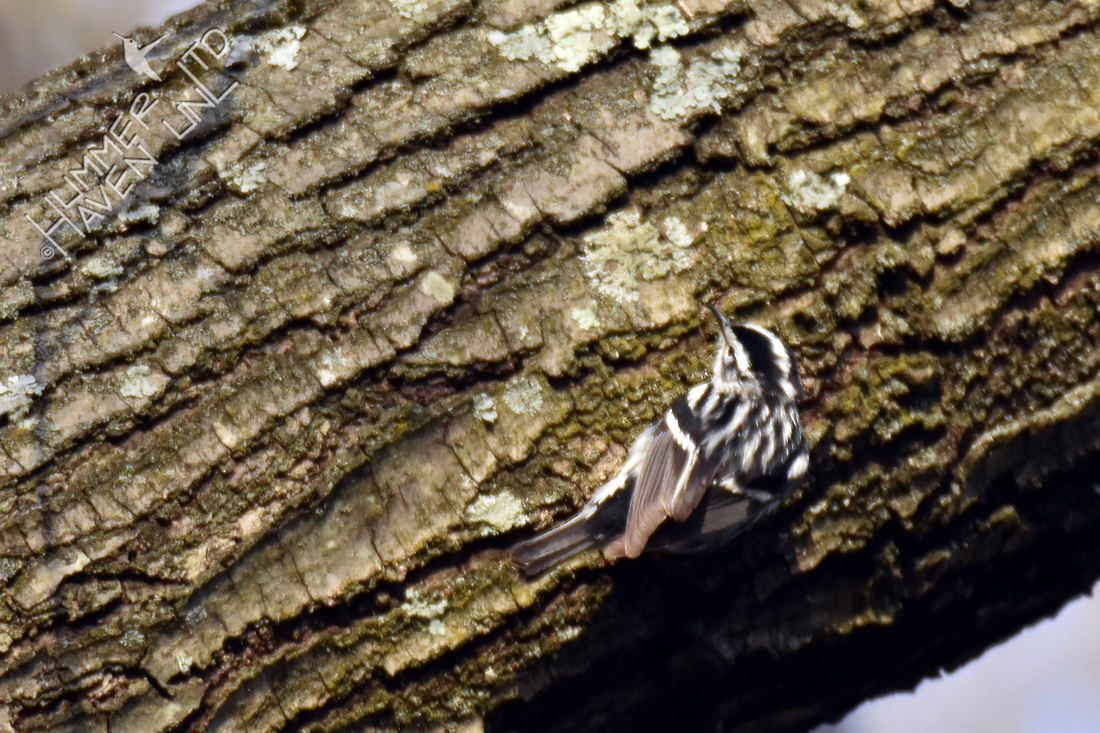 Well, I had high hopes for more migrants after that! It was several hours before I saw another striking warbler. It was taking a dip in the swale at the back property line and this bird also flew to the west. Another hour passed before a bird came in to check out the Bubbler. Was it the same bird or a second individual? That is one of the great mysteries of birding! This is the first time I've photographed a Yellow-throated Warbler in the spring! 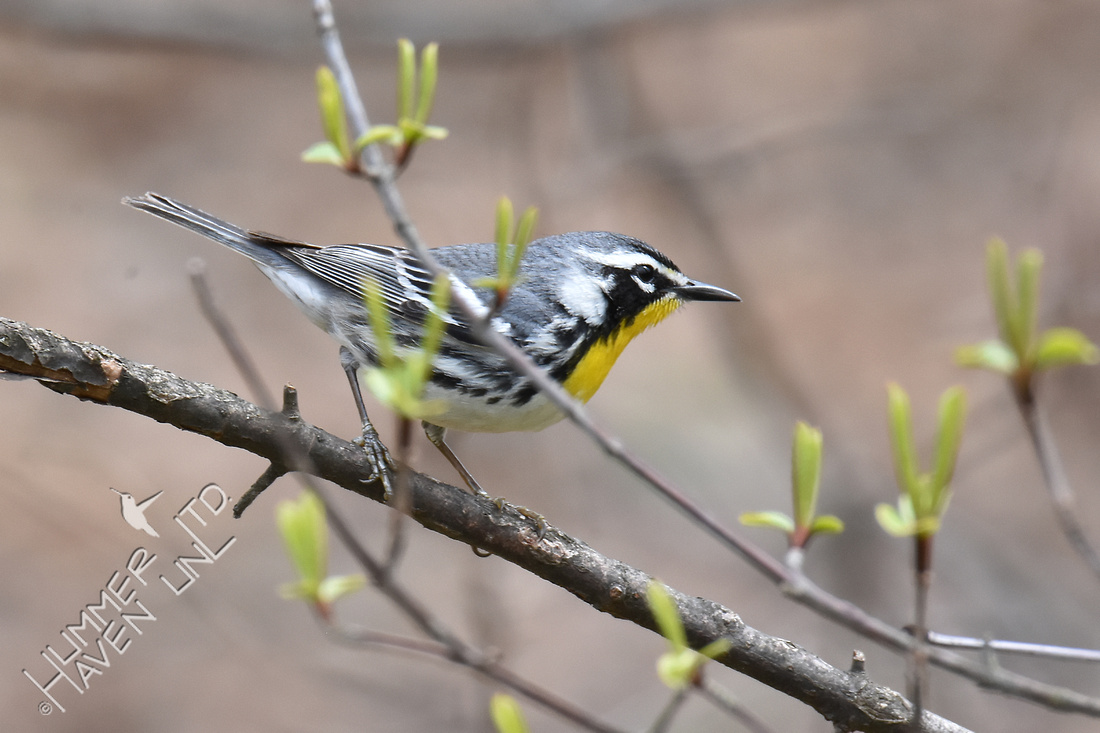 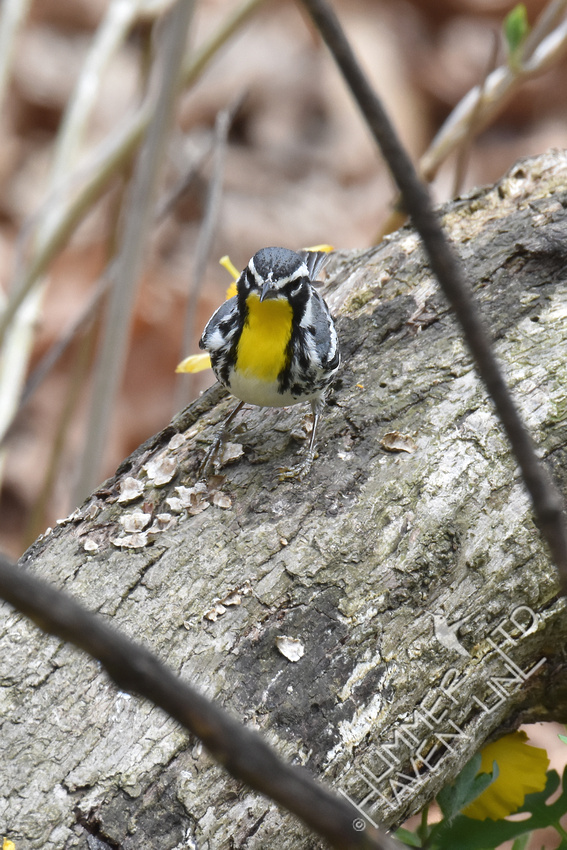 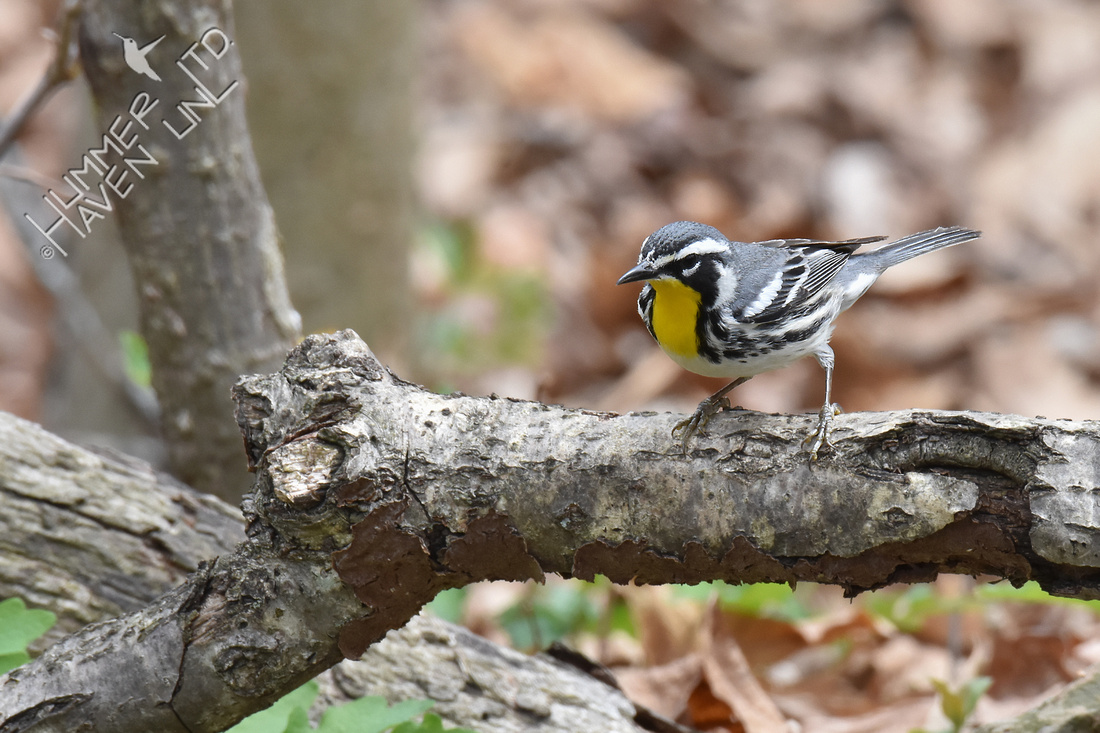 Be on the lookout! The migrants are coming. I even had a FOY Monarch on Friday, 4-20-18. It was looking for milkweed but this year it hasn't emerged yet. Last year, I photographed one laying eggs on 4-15-17. 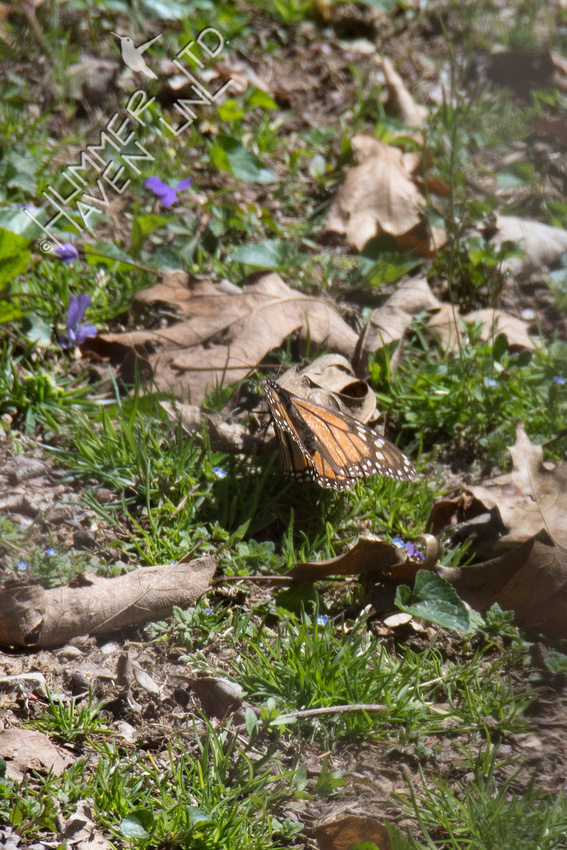 I checked back to a year ago and the difference in plant growth and new arrivals is quite striking. We must be 10 days behind with the cold spring. It has not been a figment of our imaginations!  Blog from 4-21-17

To view all the photos since the last blog post start here:  Photos since 4-8-18