It has only been four days since the last post - there has been some excitement.  The warm, dry days that we've had do increase activity at the water features.  A Nashville Warbler came in to drink on Tuesday, using the perch as it balanced to stretch and reach the small fountain in the basin. 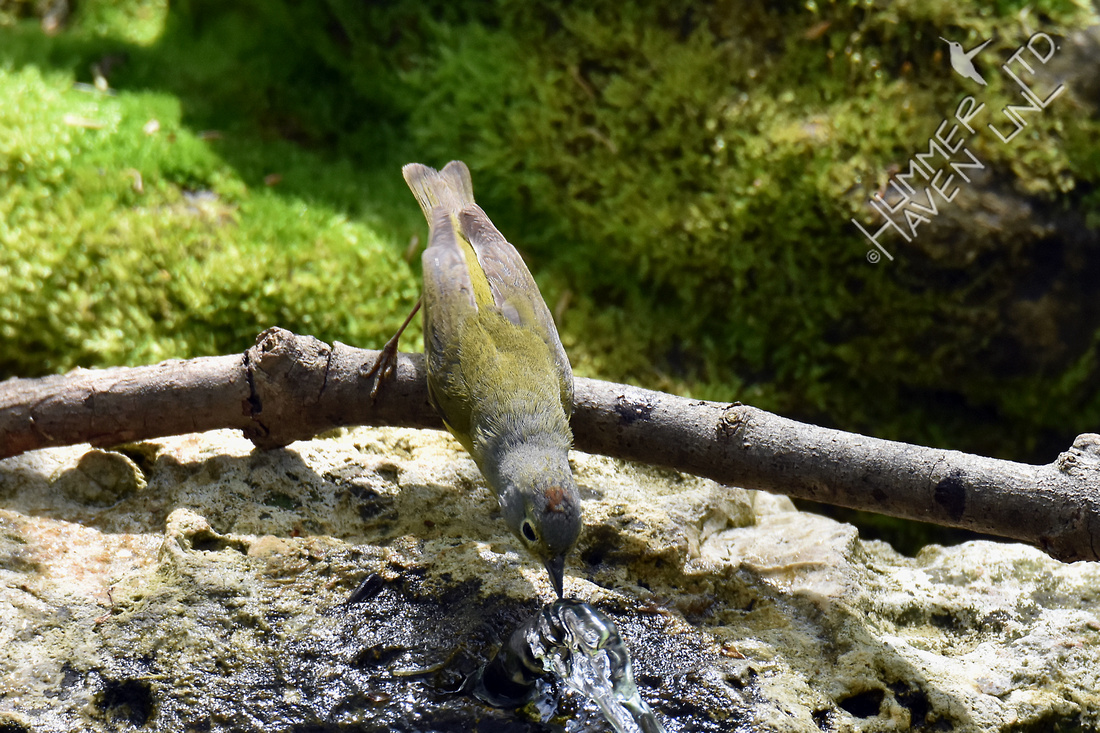 Wednesday was warmer in the morning and activity picked up early.  This Yellow-rumped Warbler investigated the original "bubble" and bathed. 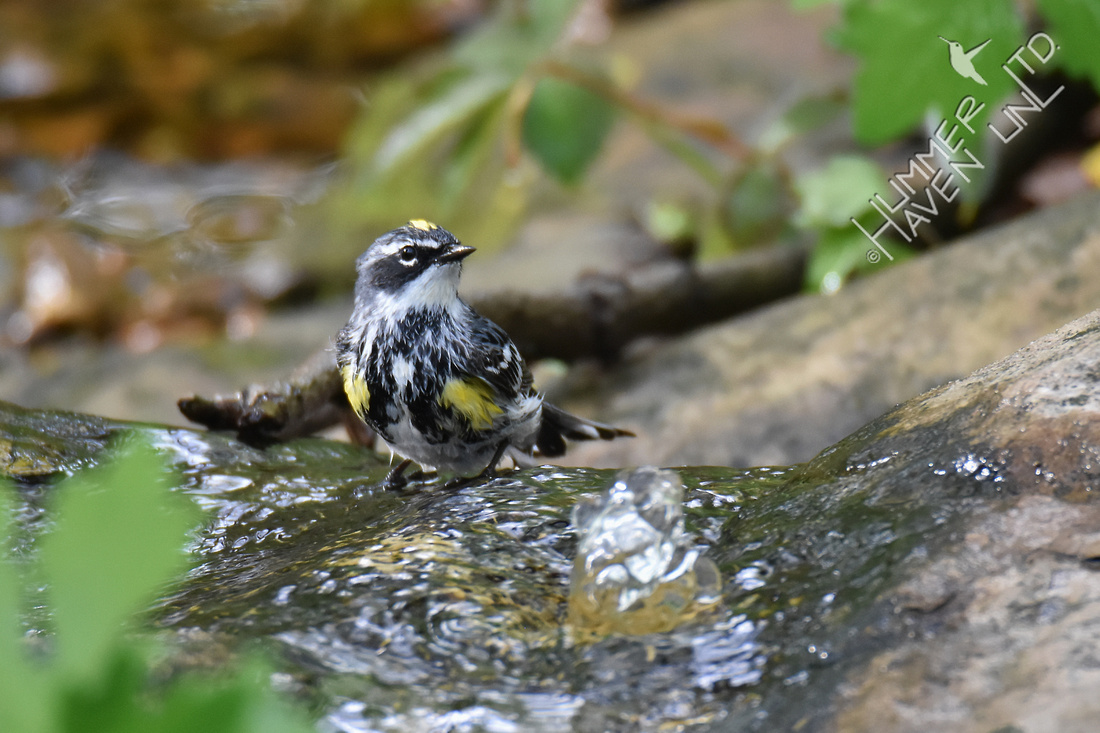 I went back outside before 11:00 am with the camera and immediately called to Dan to come and see the first Rose-breasted Grosbeak for the year. 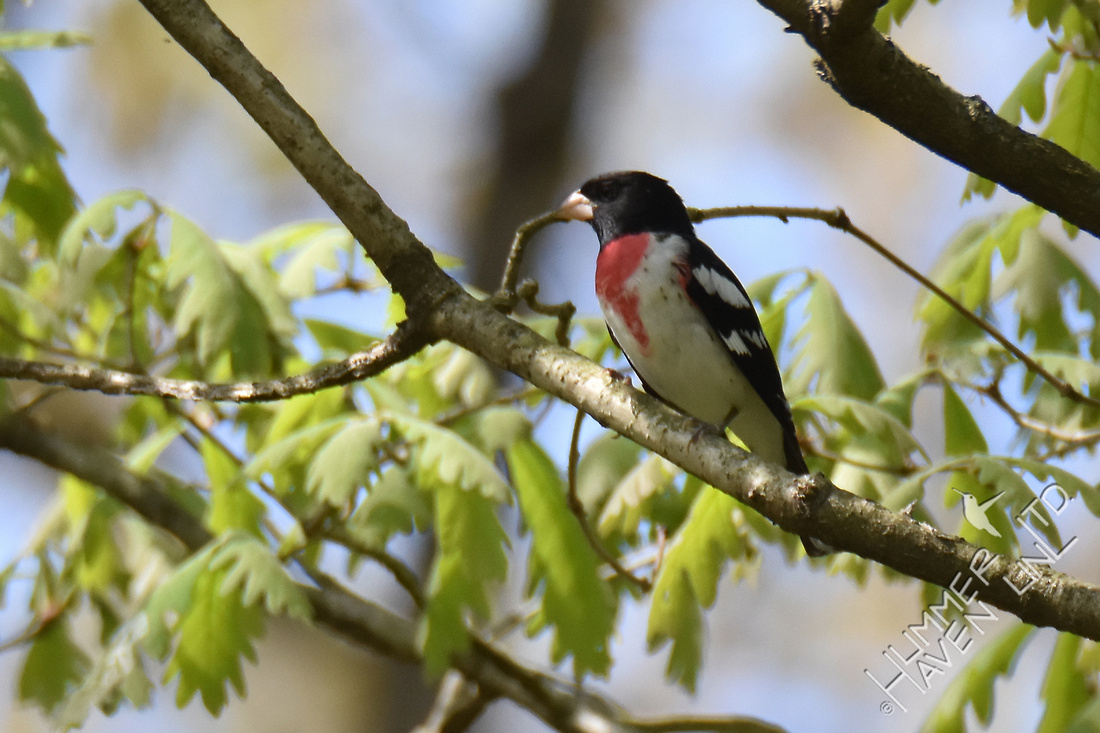 He got his binoculars and then said, "Well, what is this bird?"  There were actually two birds near each other.  We studied them in the Shingle Oaks near the driveway, about 25 feet to the right/north of the Rose-breasted Grosbeak.  They looked for caterpillars in the oak tassels and moved in and out of the light.  I soon realized they were birds I knew but had not seen here before, Blue Grosbeaks!  I quickly got the camera focused on them as best as I could to get these photos.  This is species #149 for our yard.  Their appearance is also five days earlier than the second earliest date shown in the records, April 24, 1904 so I have submitted documentation on them. Yay, Dan! What a thrill it was to stand together and watch these birds! 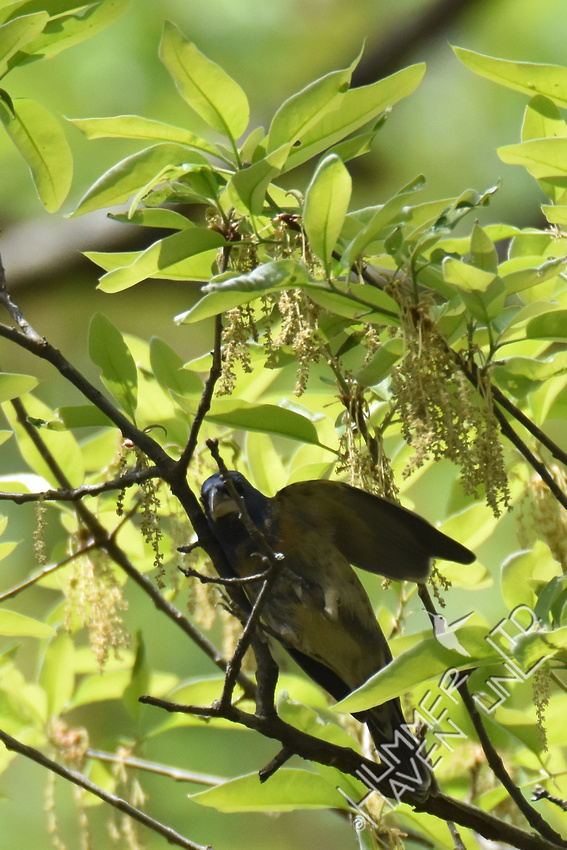 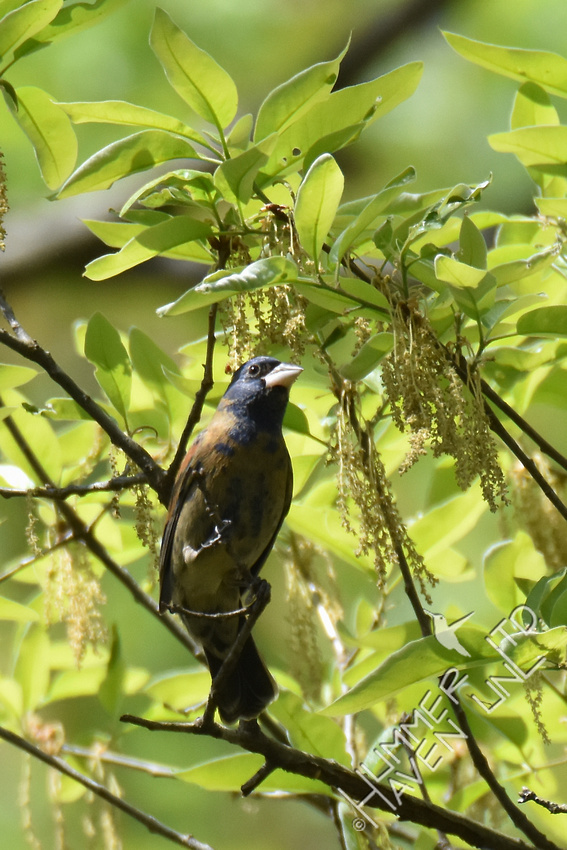 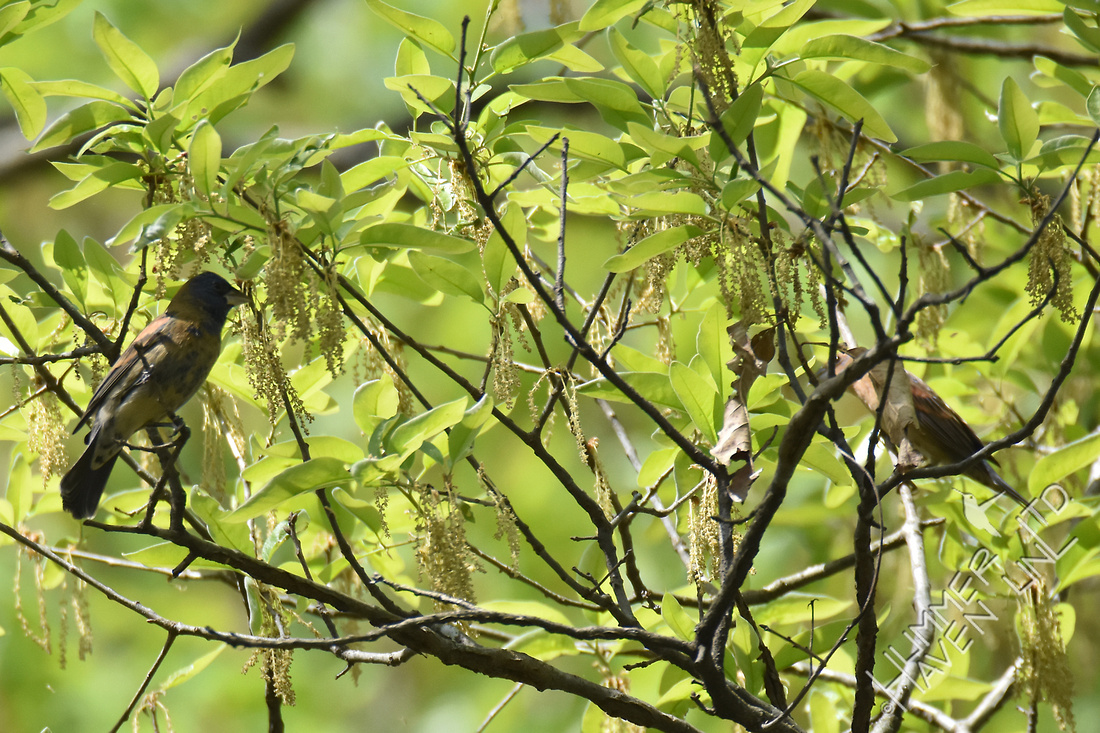 The bird with the blue head and mottled blue on the breast is a first year male.  The second bird had a warm brown head and appeared to be a female. 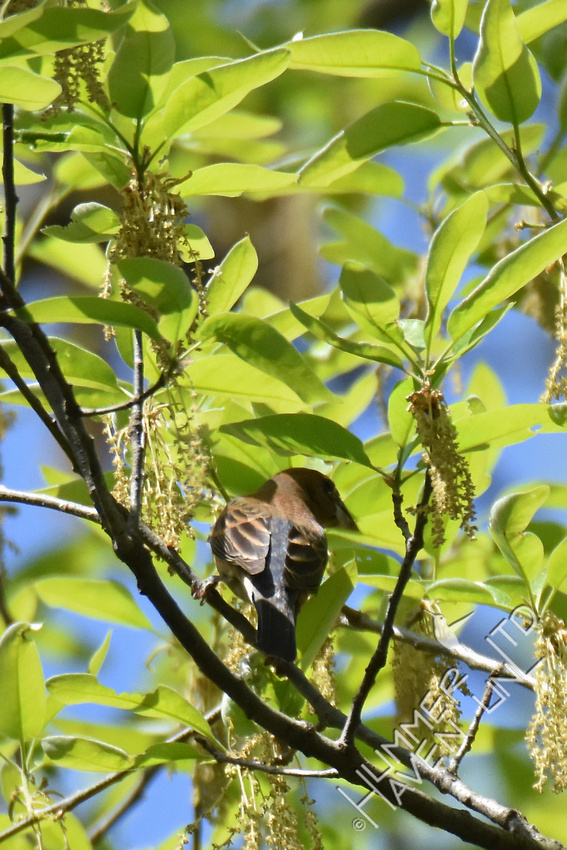 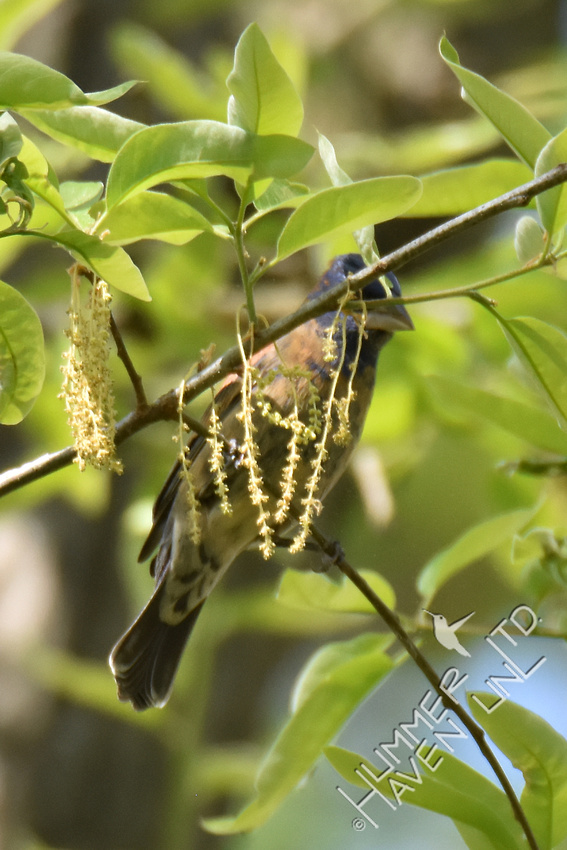 I saw the Blue Grosbeaks several more times but they were always a bit further away.  Other birds continued to come to the Bubbler as the temperatures climbed to 87.5 degrees.  Yellow-rumped Warblers, American Robins and Swainson's Thrushes came in. 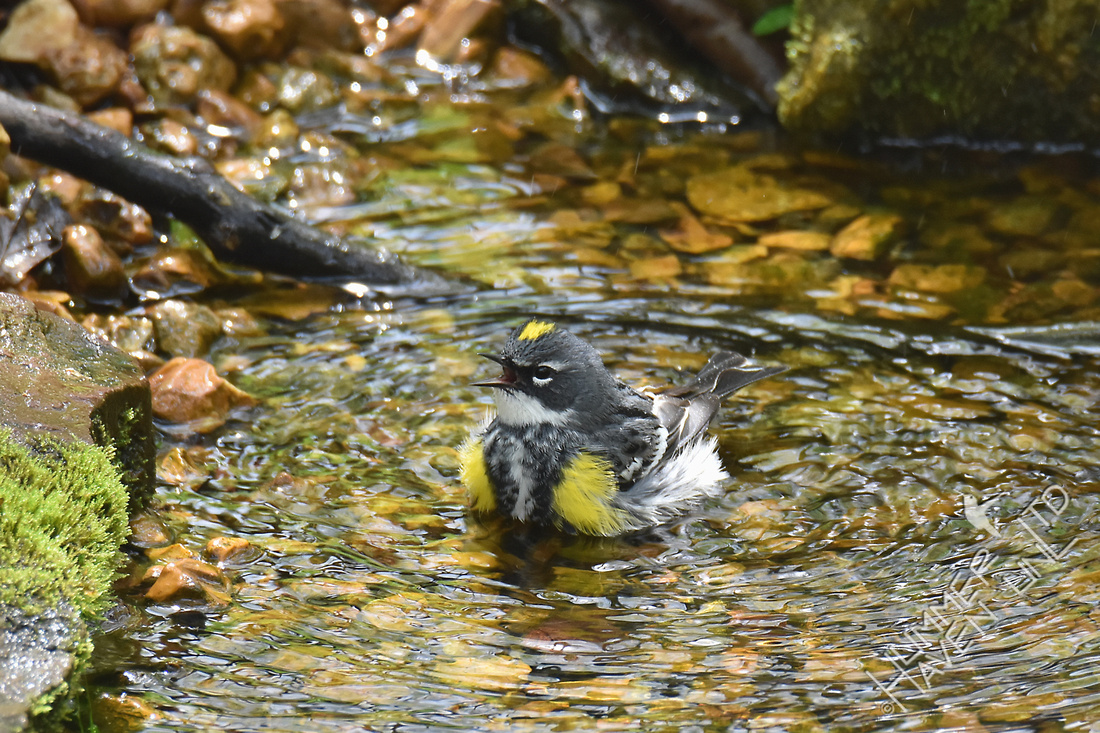 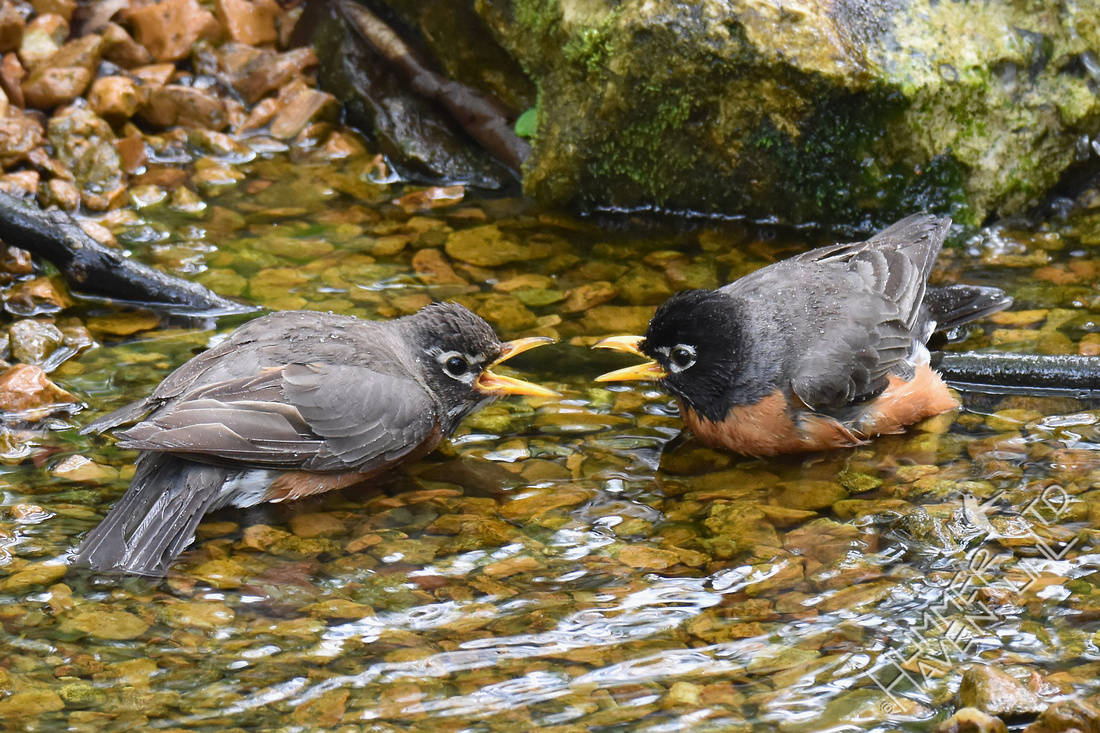 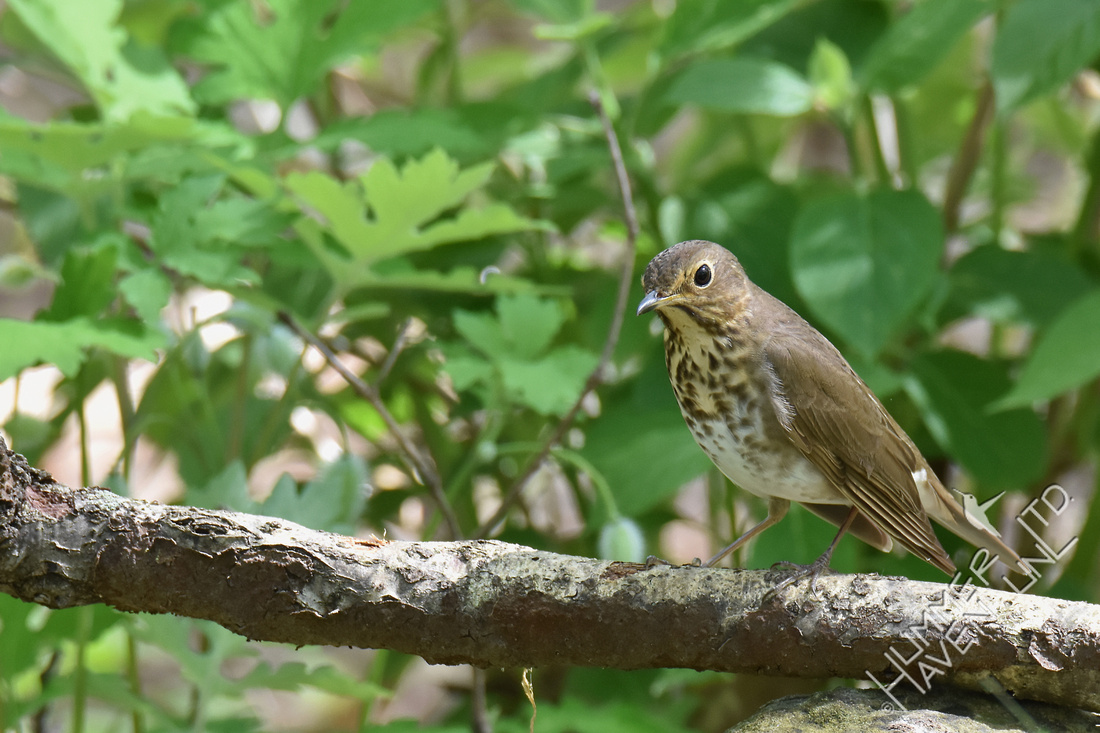 Thursday, 4-20-17 was still warm and a bit breezier at times.  A Ruby-crowned Kinglet popped in and one of several Indigo Buntings that I had seen came down for a bath. 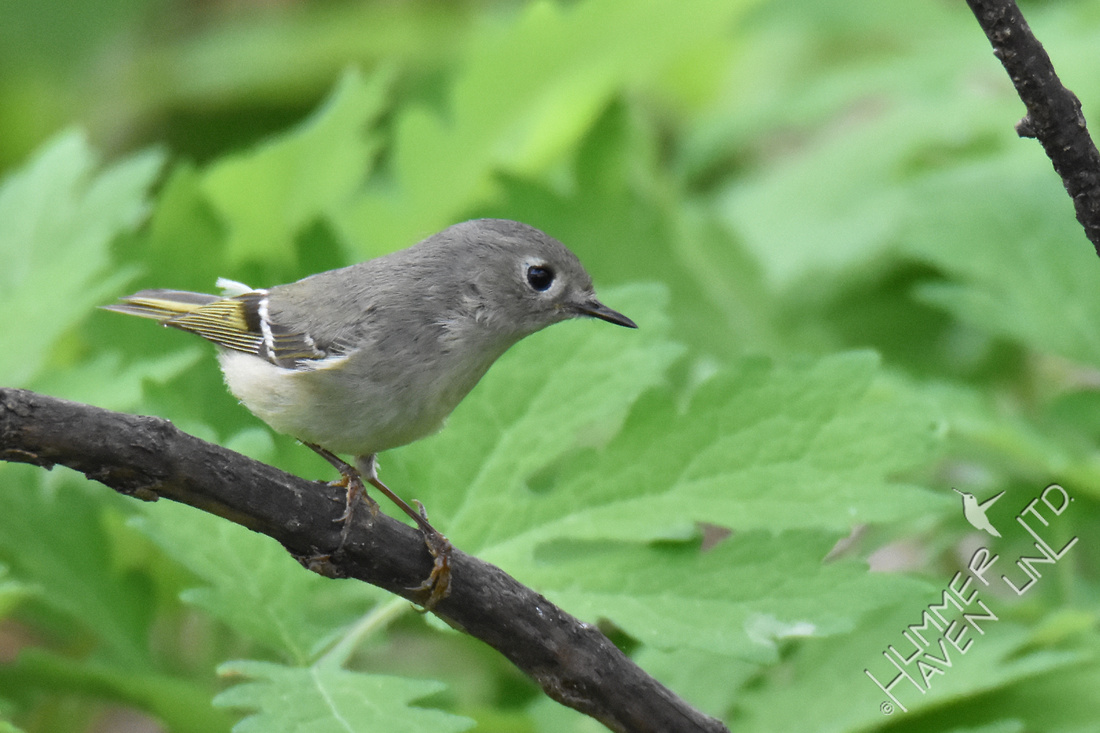 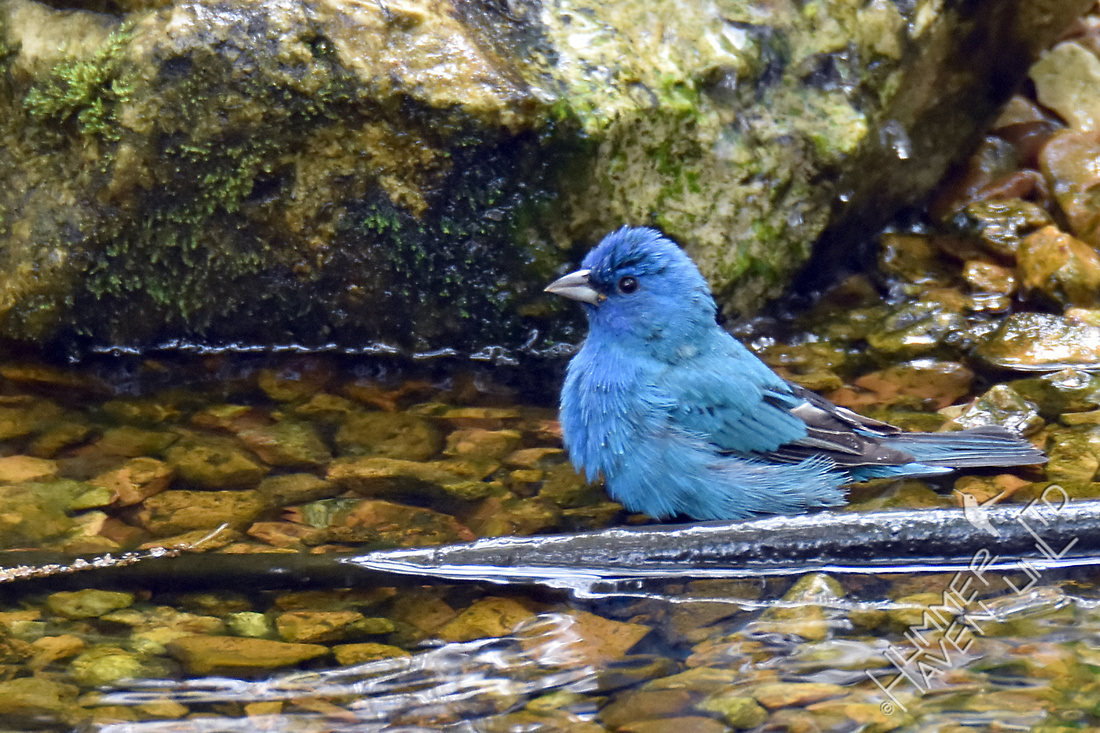 And, the long awaited Ruby-throated Hummingbird has returned!  It came to the feeder at 1:25 pm, five days later than last year, but welcome all the same. 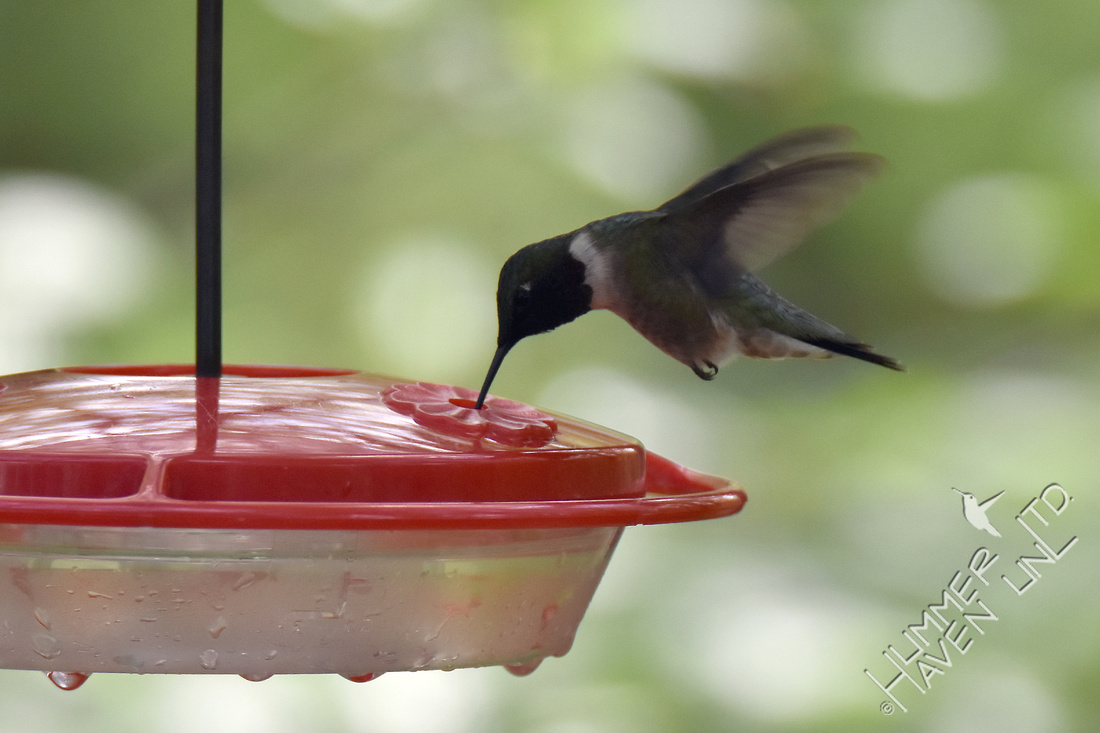 The last surprise of the day was a Palm Warbler which I spotted near the cypress about 3:20 pm.  It came near the Bubbler for maybe twenty seconds before taking off again. 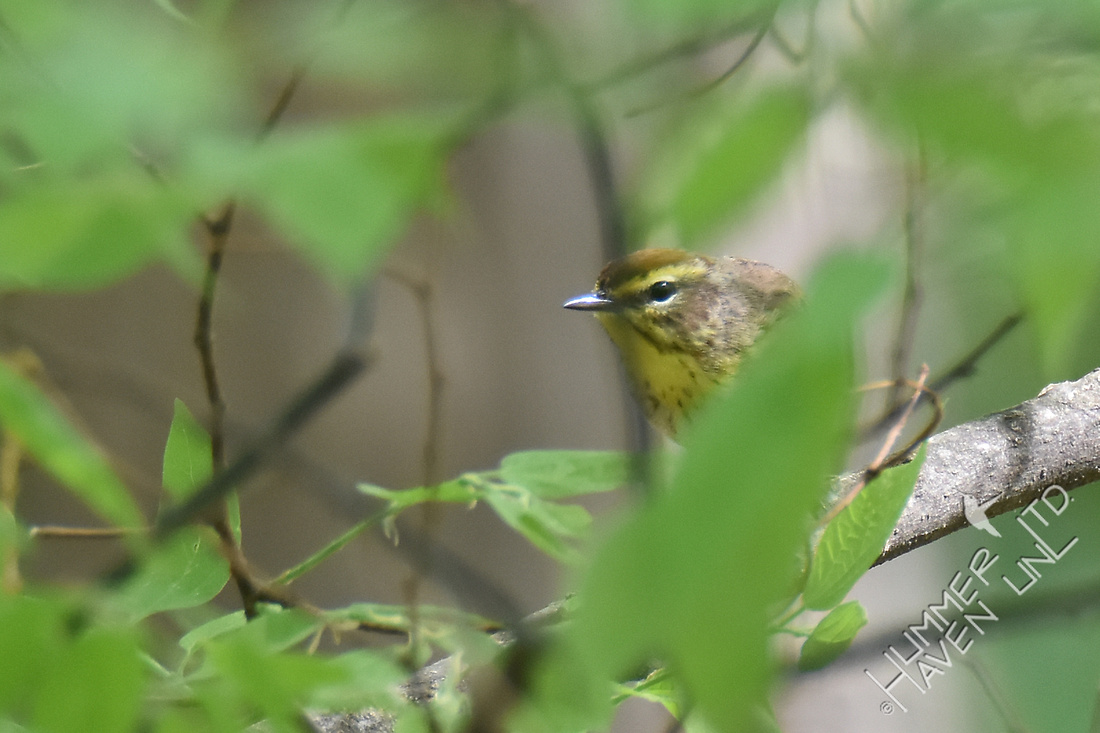 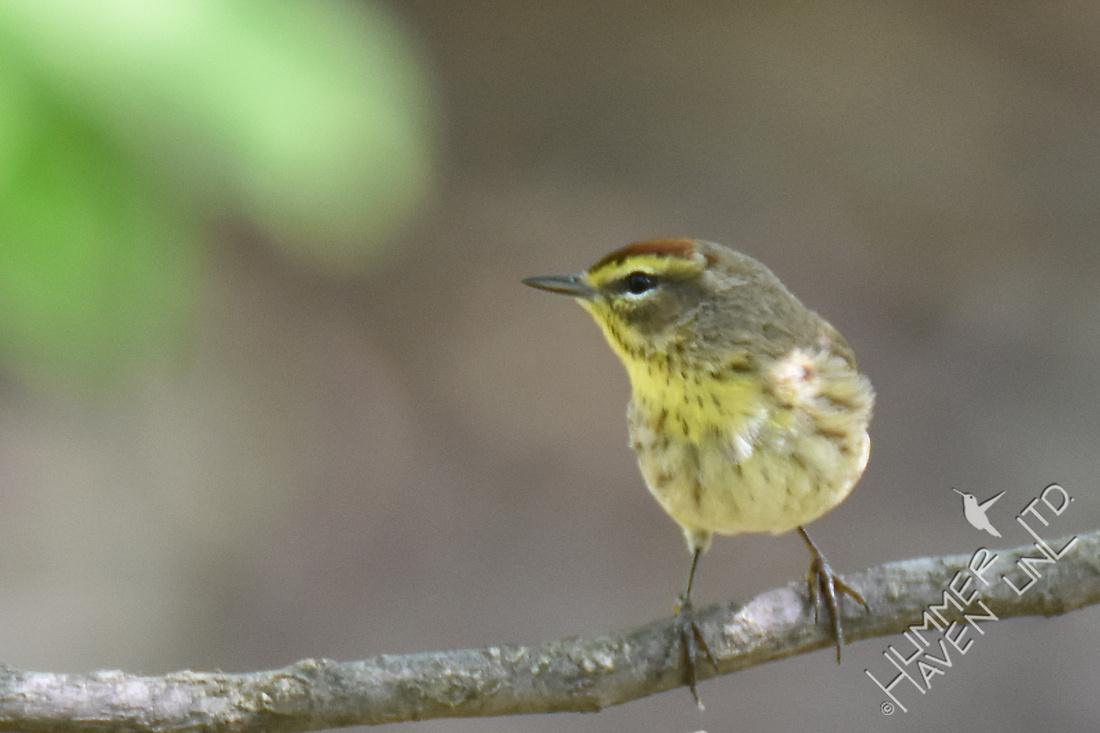 The Red-bellied Woodpecker came in to the bark butter feeder.  It looked like it had been in a dog fight!  I wonder if it has been protecting its mate from European Starlings. 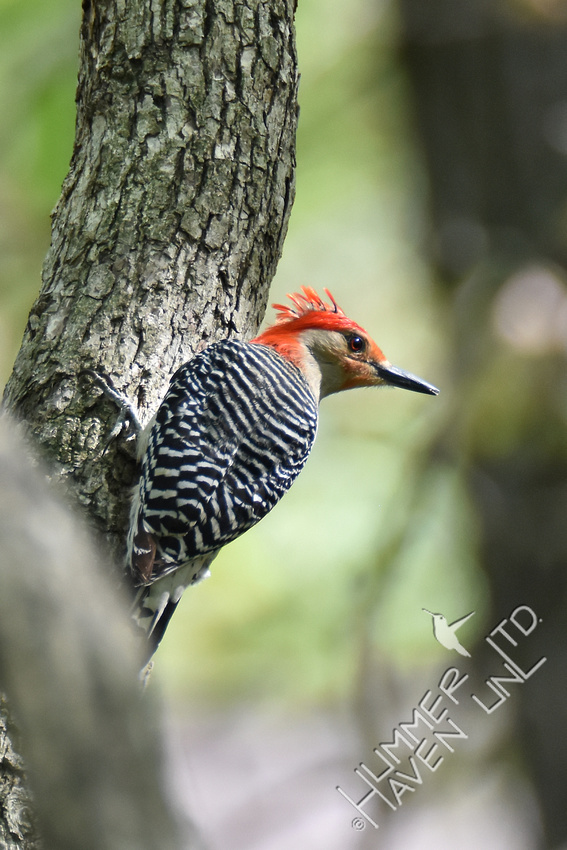 Today, Friday, 4-21-17 has been gray and cooler with a few light showers.  A Tennessee Warbler perched briefly near the Bubbler and the hummer was back at the feeder. 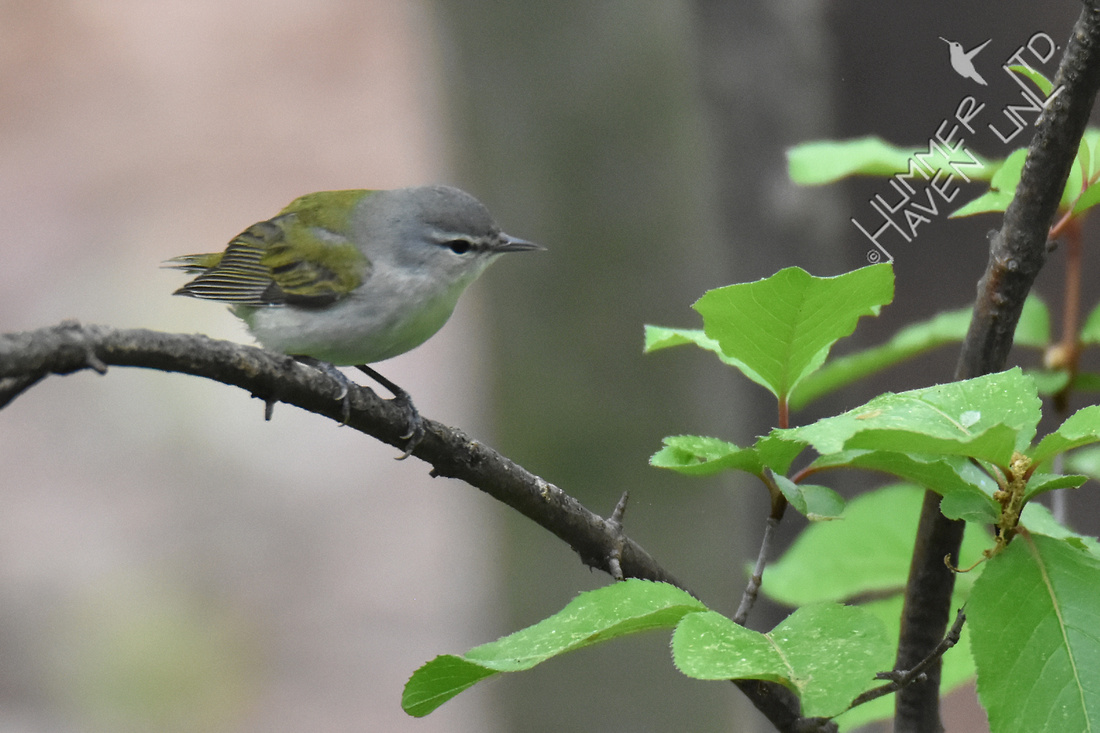 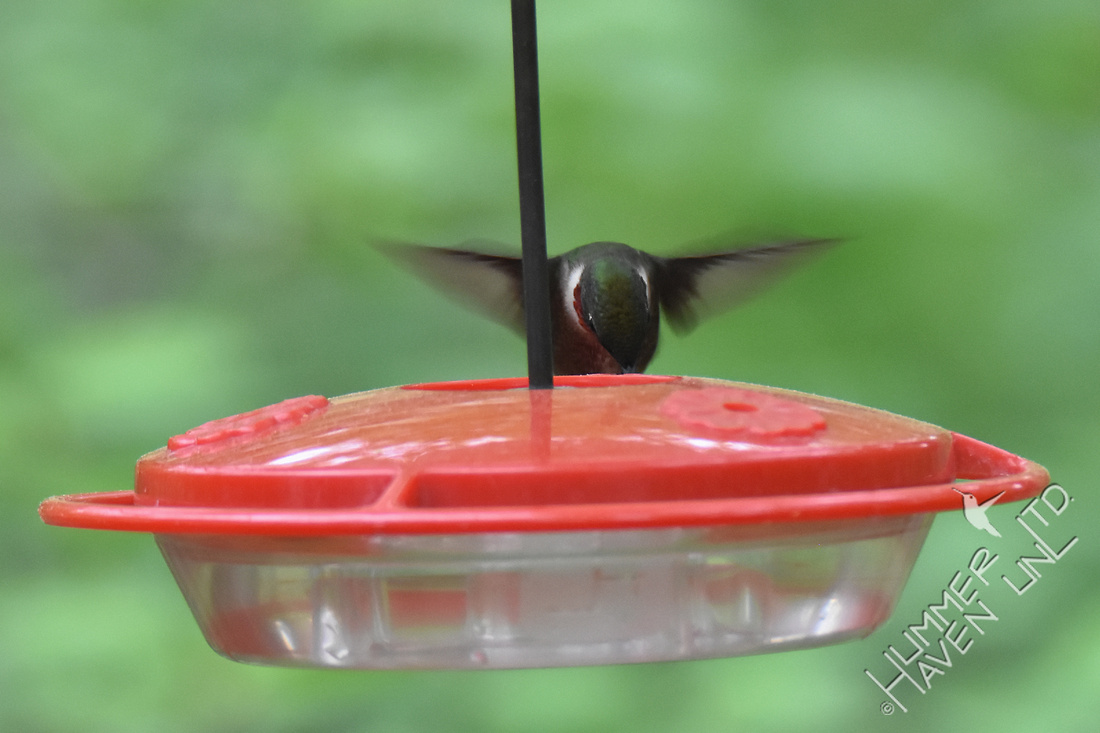 Rain is needed right now.  It may slow bird movement a bit, however the real push is yet to come.  I try to upload photos daily into the 2017 Birds at Shady Oaks Gallery so one can check that anytime.  Happy Migration!

Judy Tisdale(non-registered)
Congratulations on the new bird! This is a little north for the species so that is extra nice! My only birding accomplishment is that I have gotten a pair of pileated to come to a BIG suet feeder that I put up on the property down near Hillsboro that I am remodeling for a friend.I kept seeing them and was pretty sure that a monster block of suet would do the trick. The gnatcatchers scold me when I am in the garden there so I guess they are nesting nearby. I will put up the hummer feeders on Sunday! Happy birding!
No comments posted.
Loading...
Subscribe
RSS
Recent Posts
Ever grateful...Happy Thanksgiving! 11-25-21 Mid-November already! 11-14-21 Happy Halloween! 10-31-21 Celebrating 21 years with the Bubbler! Fall Big Day Report 10-10-21 September, it's a wrap! 9-30-21 Third week of September migrants, 9-21-21 Early September migrants and more 9-14-21 A "worm", a "confusion" and a "glittering" of birds! 9-4-21 What a hoot! 8-25-21
Keywords
bubbler pond rusty blackbird mink fox Tanager bluebird basin warblers Purple Finch
Archive
January February March April May June July August September October November December
© Hummer Haven UnLtd.
Powered by ZENFOLIO User Agreement
Cancel
Continue