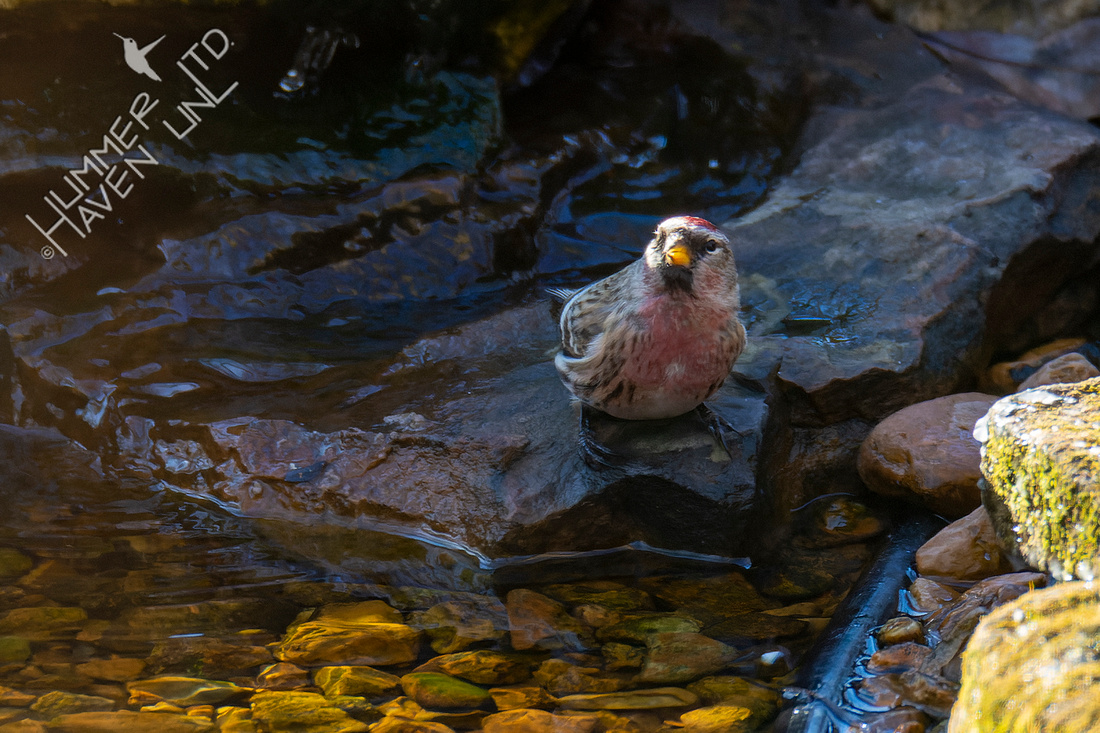 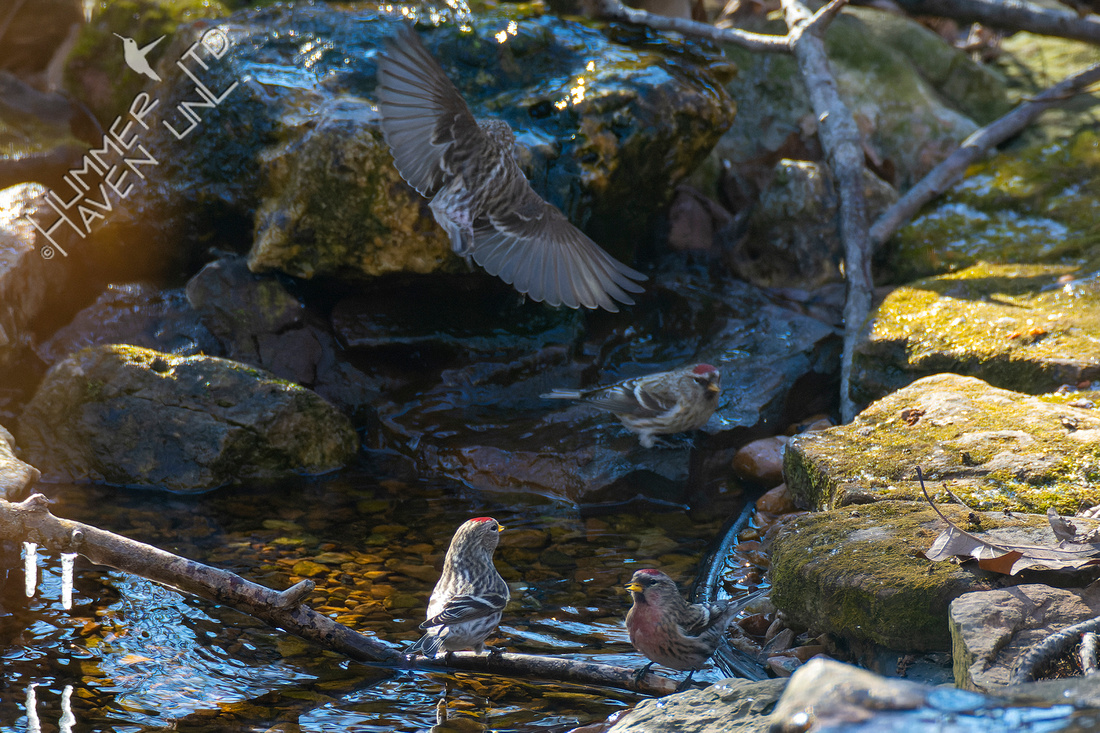 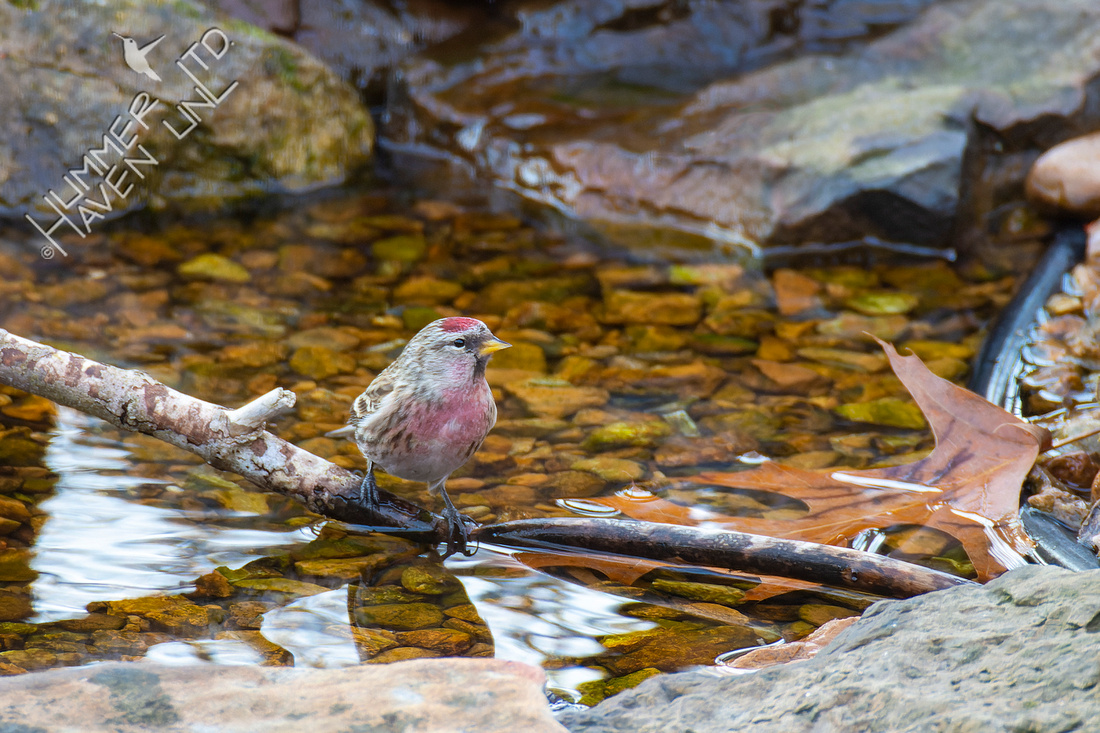 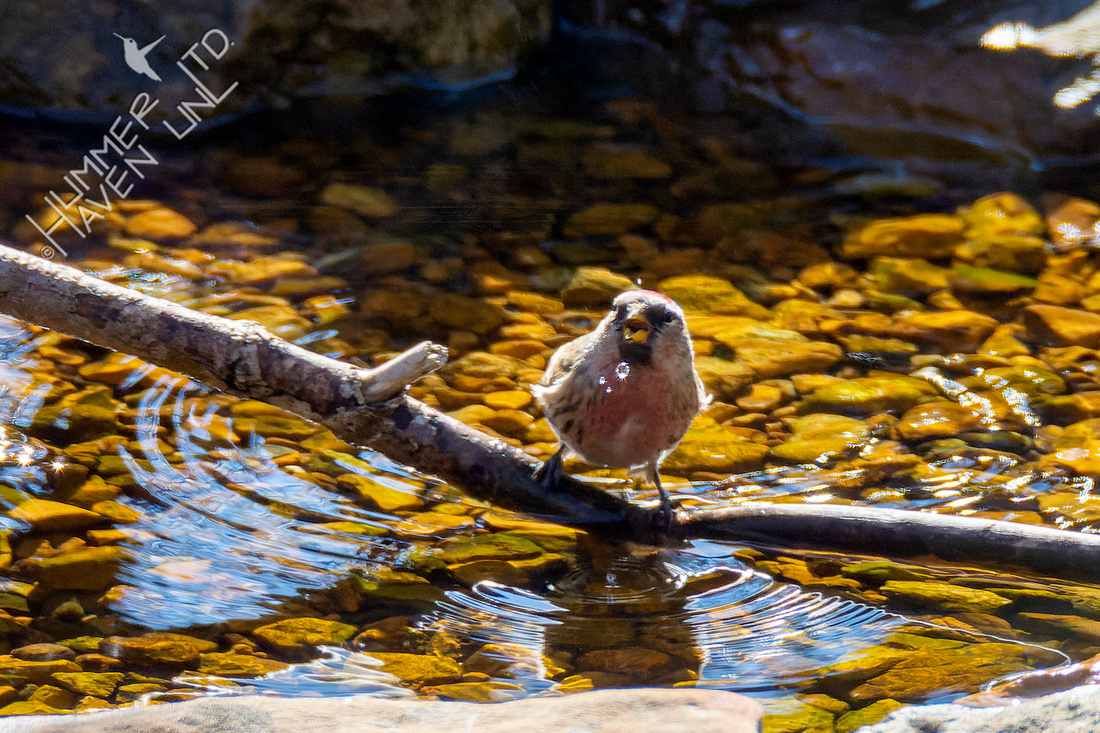 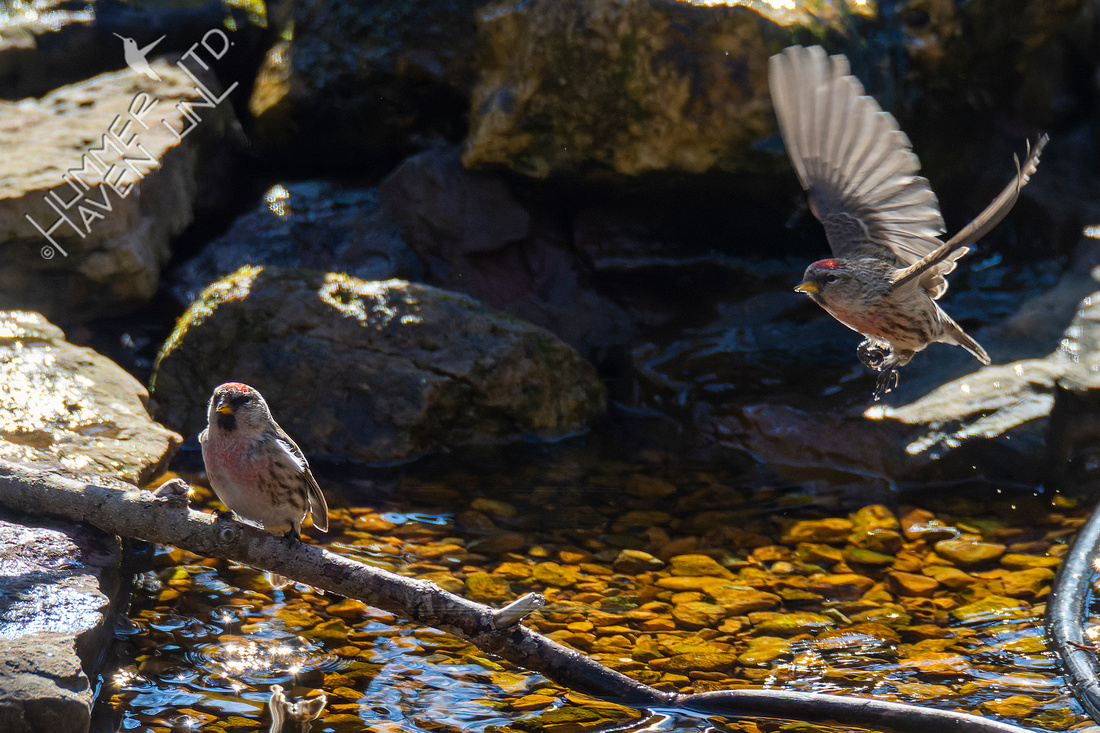 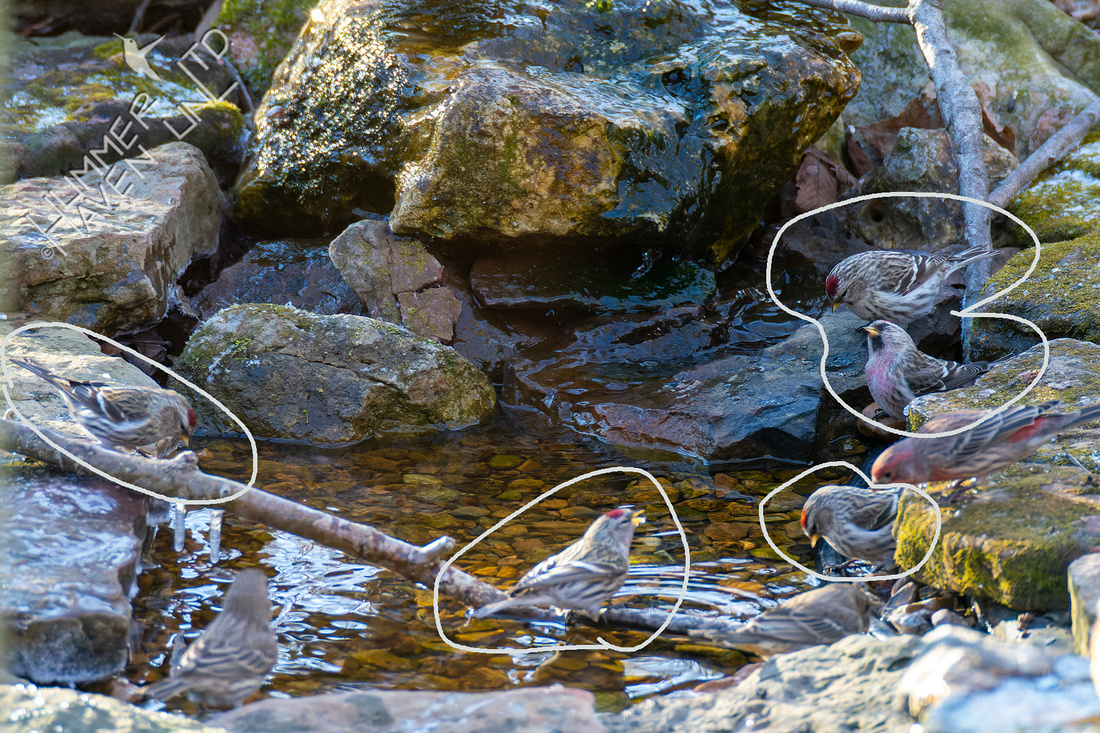 It is difficult to know for certain how many birds were in this little flock! There was a slightly different mix of male and female/immature birds each time they were seen and then, it was only for 30 seconds or so. My highest count was 3 males and 4 females at any one time. We had put out fresh thistle or nyjer seed in a tube feeder in the garden for them, but the birds were never seen at a feeder. My guess is that they were eating seeds in trees like our Pond Cypress or Catalpa where siskins will feed, or in neighboring Sycamores or River Birch. They may have been in the garden, and I just missed them - they're the size of a goldfinch, around 5" and truly frenetic!

The Common Redpolls are the rarest of the three small finches that might be seen in Missouri. We're all familiar with the American Goldfinch, which is resident year-round. The Pine Siskin is also an irruptive species, coming south to look for food and we've had them in good numbers some years. There is one other form known as the Hoary Redpoll, which is extremely rare. It is much frostier looking and the bill is smaller. It is still described as a separate species, but may soon be "lumped" with the Common Redpoll, as they are very closely related.

Keep a lookout for the Common Redpoll at your feeders, you might get lucky, too!

There are some fascinating things known about these birds. They tunnel into the snow to keep warm! Check it out!  Common Redpoll 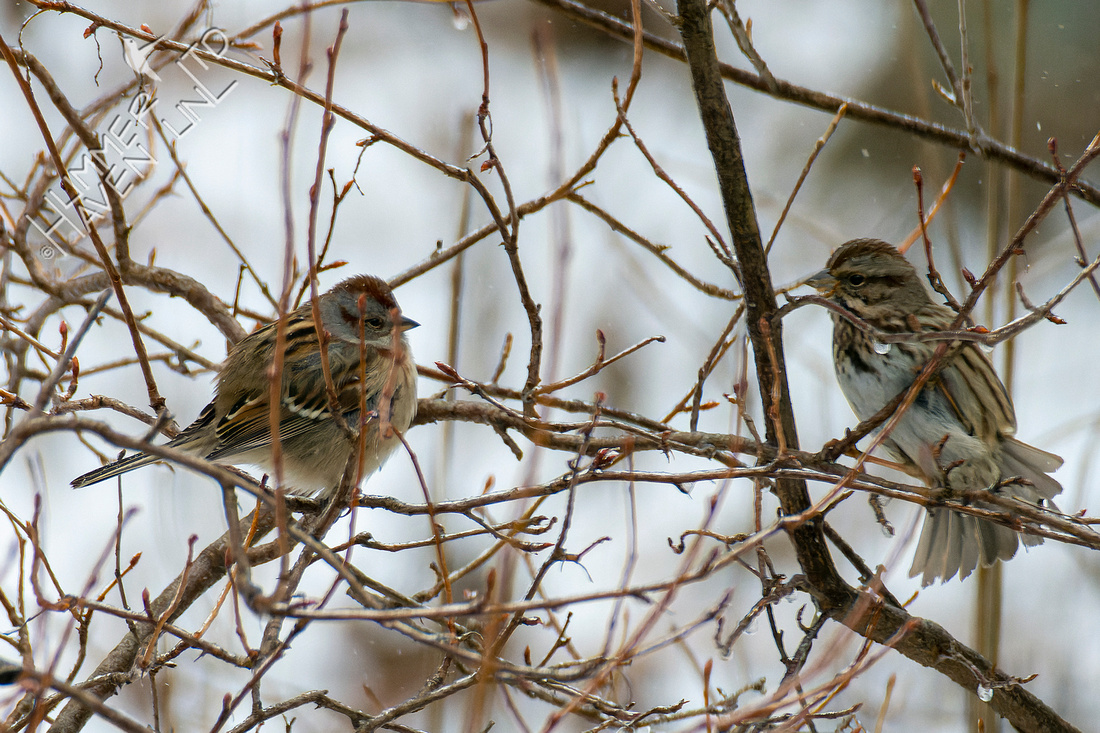 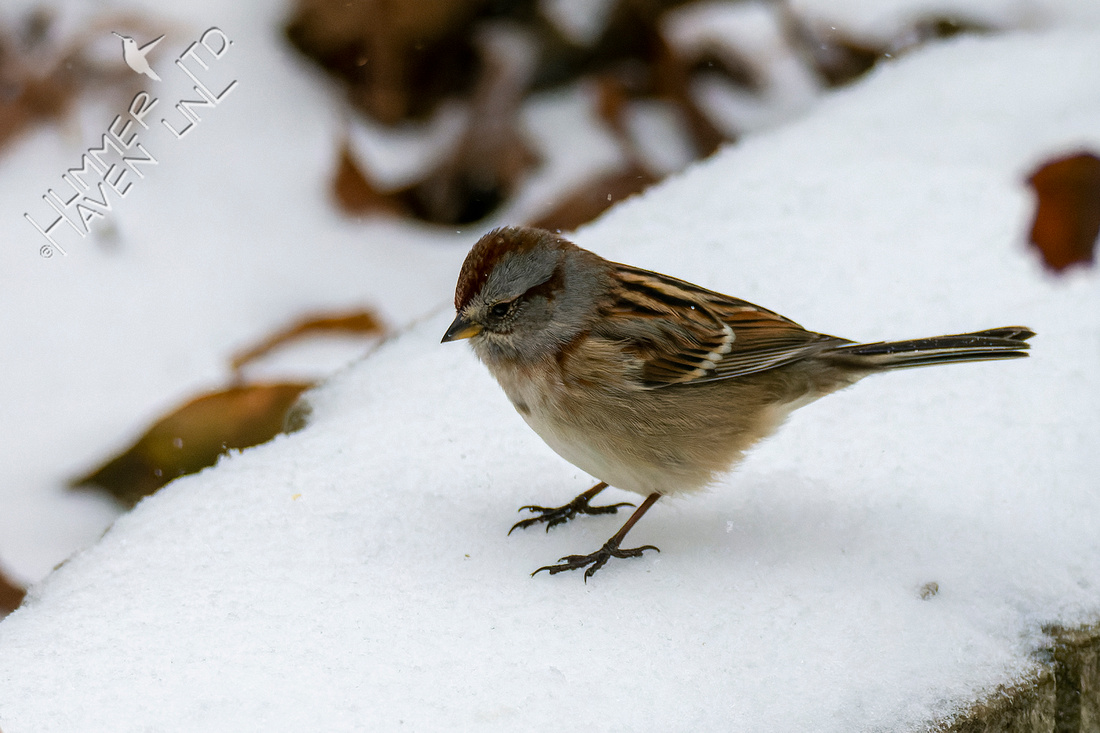 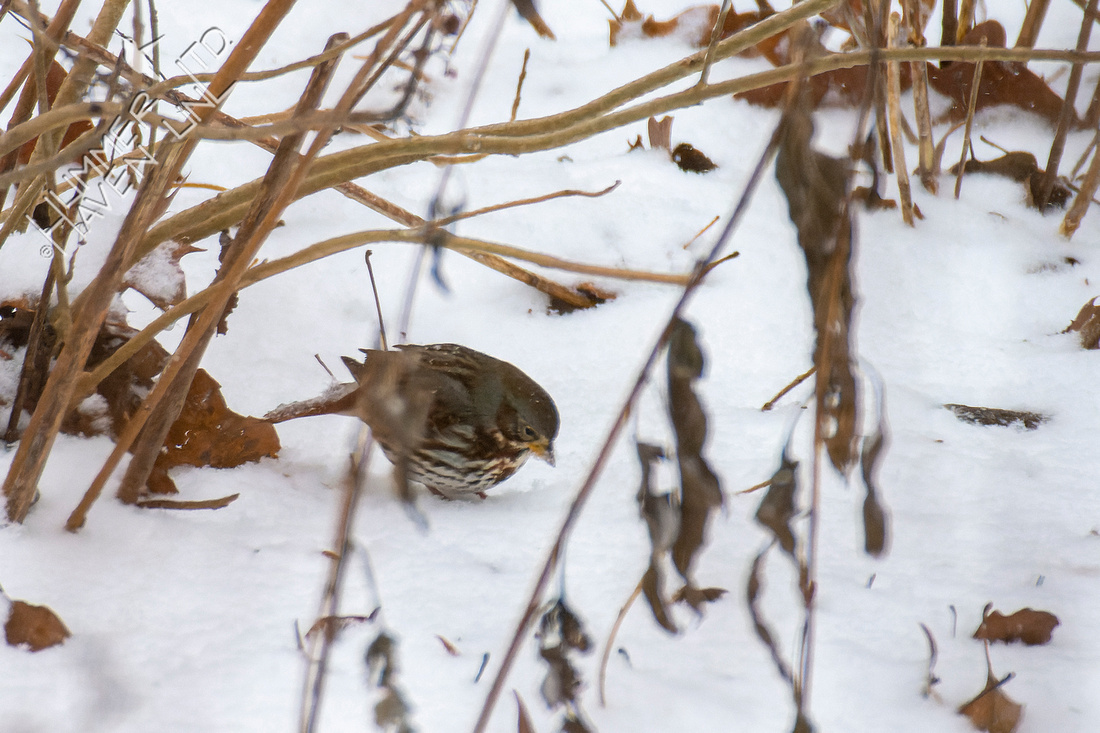 Our first winter storm came in on Wednesday, February 2. With it came two new sparrows for the year, an American Tree Sparrow and a Fox Sparrow. The first image shows the American Tree sparrow on the left with a Song Sparrow on the right, in Clove Currant (Ribes odoratum). Secondly, the tree sparrow is on its own, on the snow covered wall. The Fox Sparrow was staying in the shelter of the Arrowwood Viburnum (Viburnum dentatum x Blue Muffin). Happy to see these birds, we don't have them come in every year. 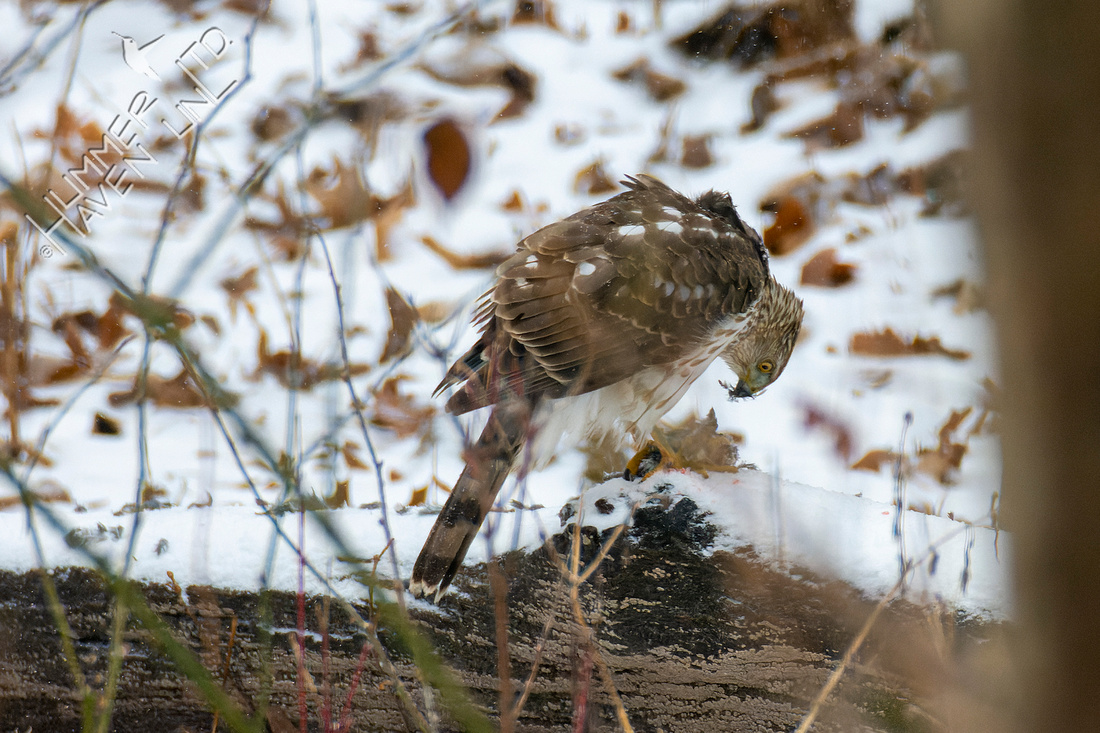 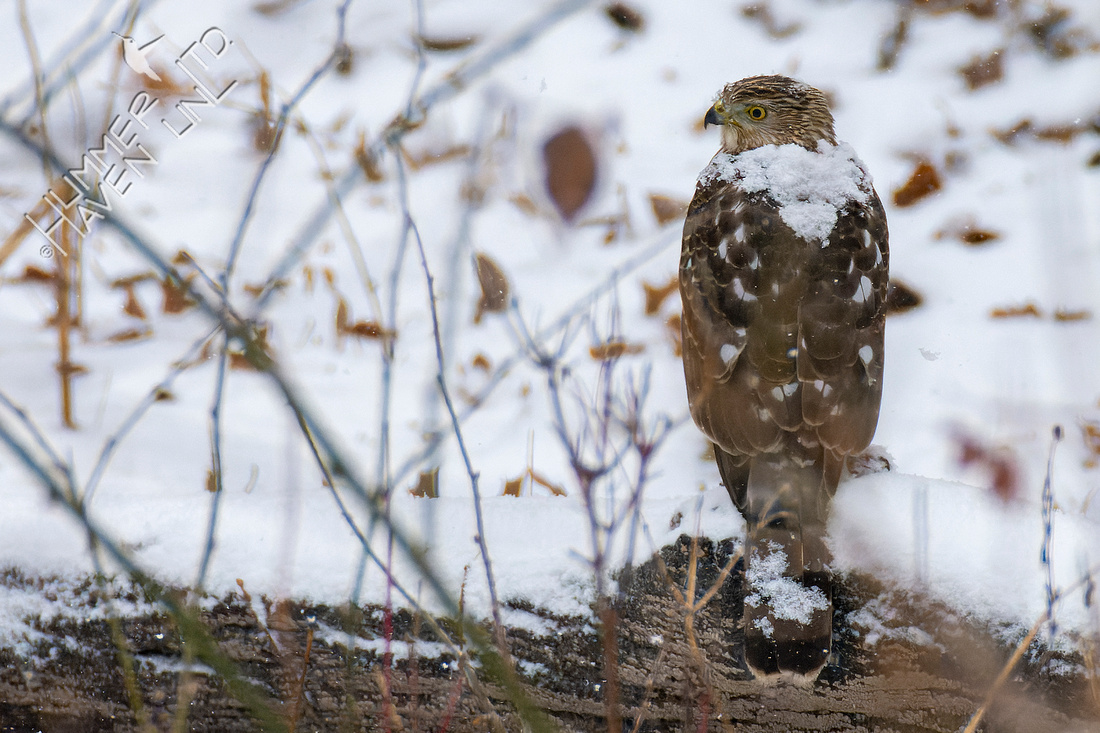 An immature Cooper's Hawk has been terrorizing the smaller birds. We saw it with a black feathered prey, hoping it had caught a European Starling. It sat on that log for over 3 hours, digesting the meal as snow fell. Then, it was off again to find dinner! 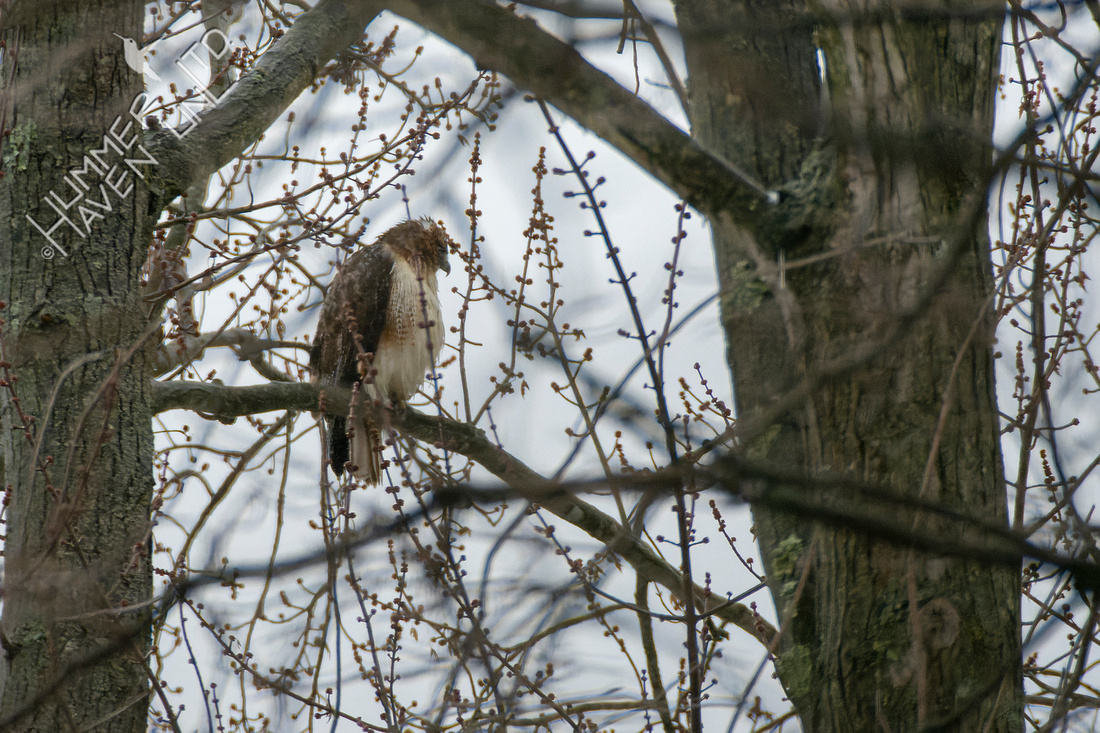 While the Cooper's rested, a Red-tailed Hawk was seen scoping out squirrels. 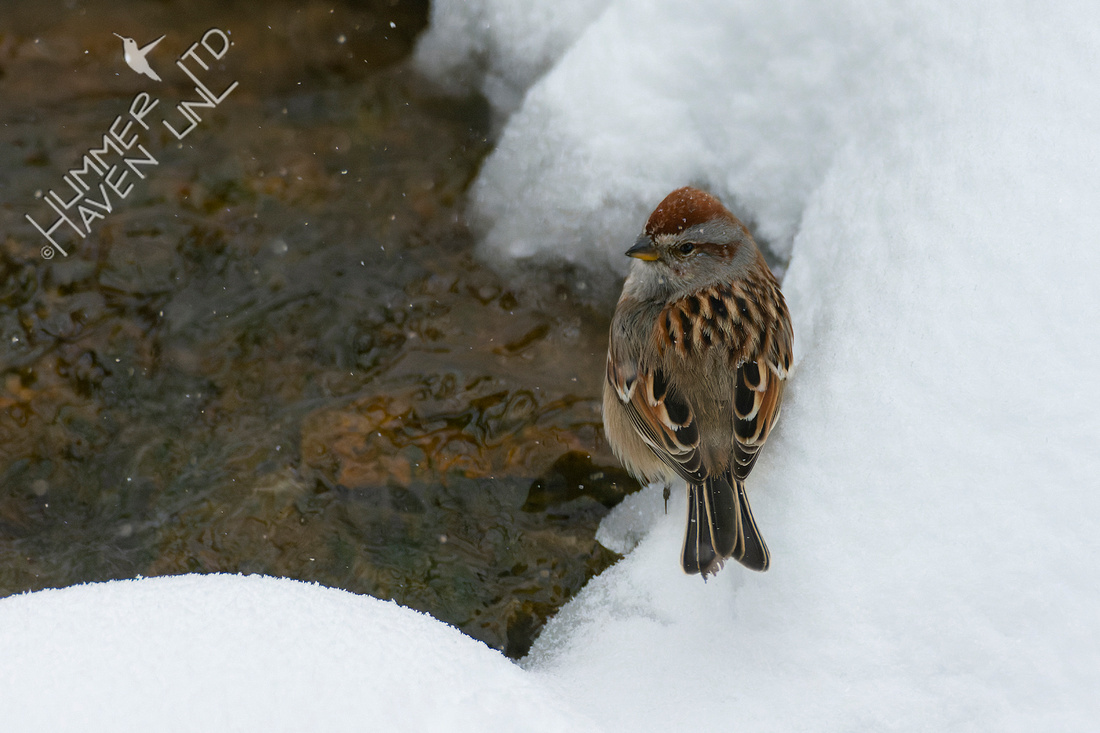 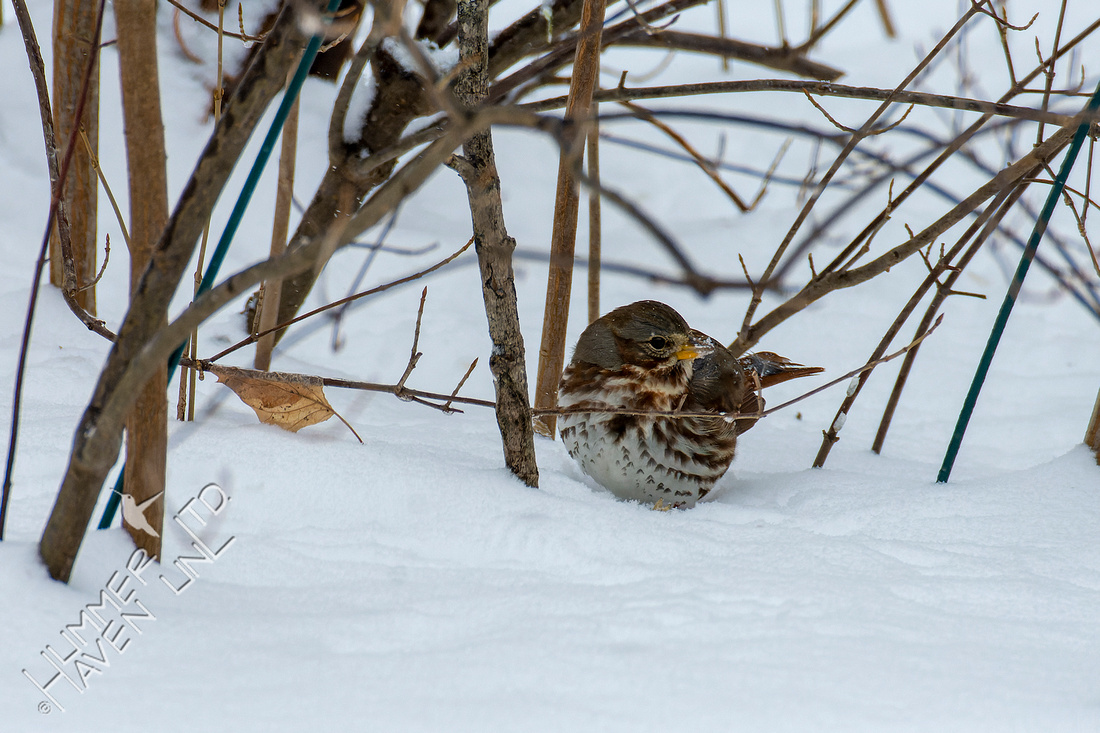 The next day, both sparrows were seen again. The American Tree Sparrow was drinking at the pond and the Fox Sparrow was again staying close to the Viburnum when it was not under the feeders foraging for seed. 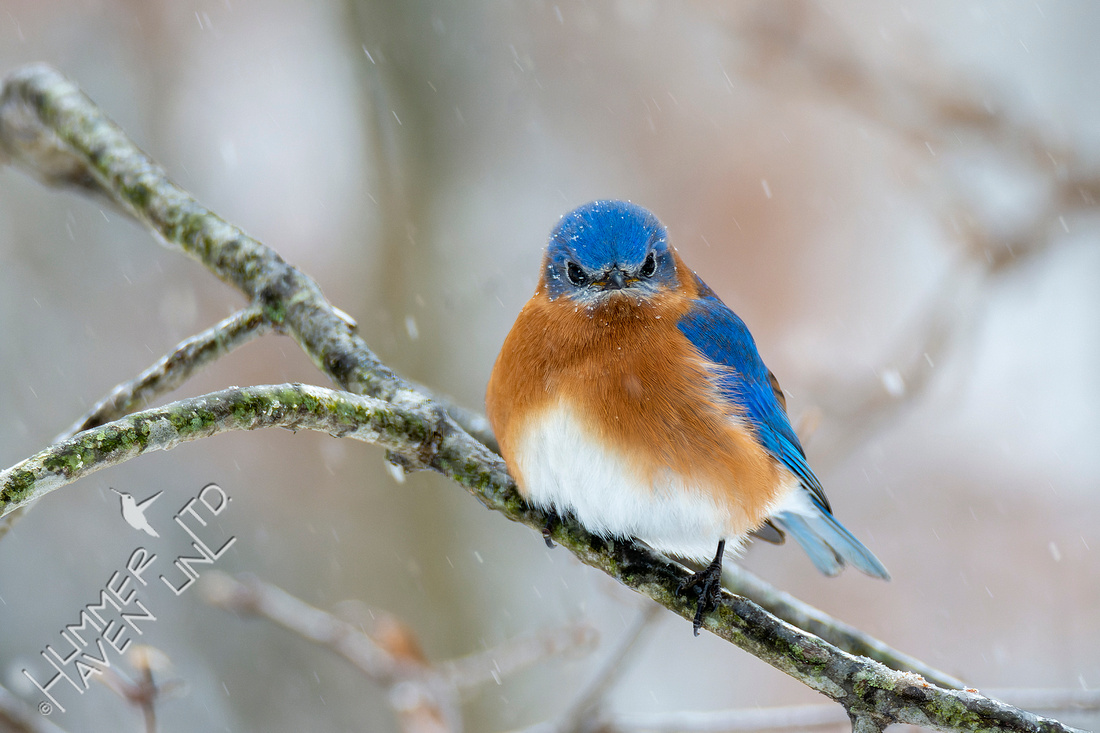 This Eastern Bluebird summed up the general feeling out in the storm. Conditions were tough. All the birds had been singing, tuning up for spring. Males have been chasing other males. We have gained over an hour of daylight, so surely, spring can't be too far away! 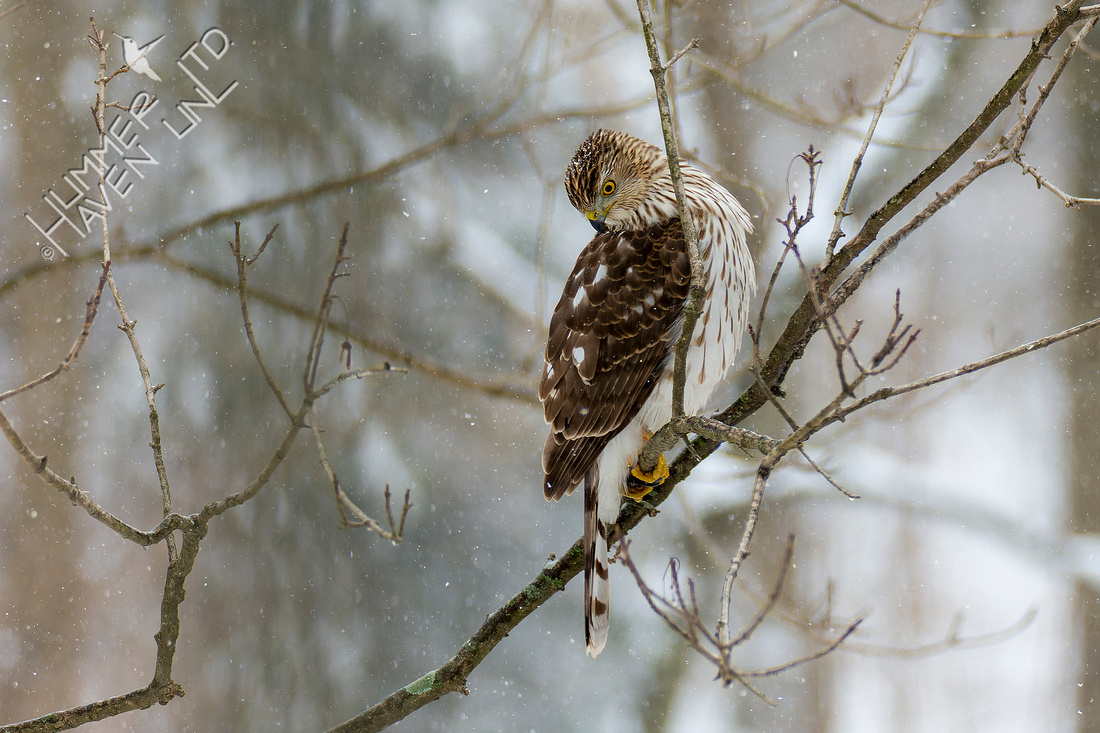 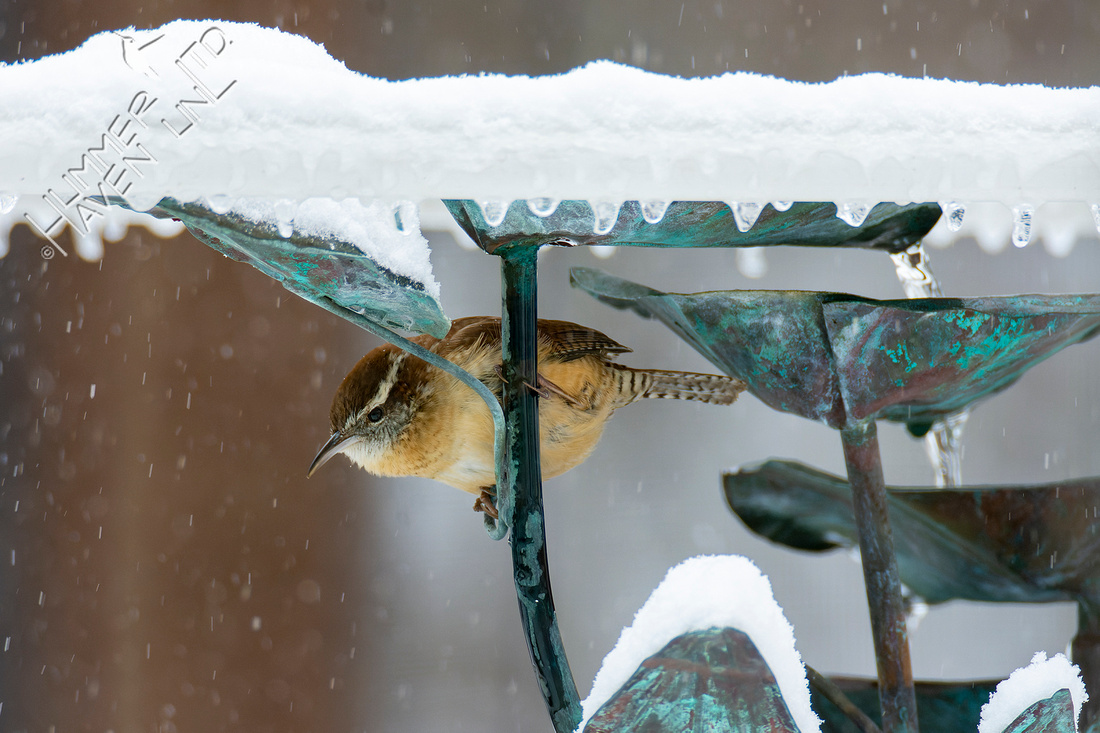 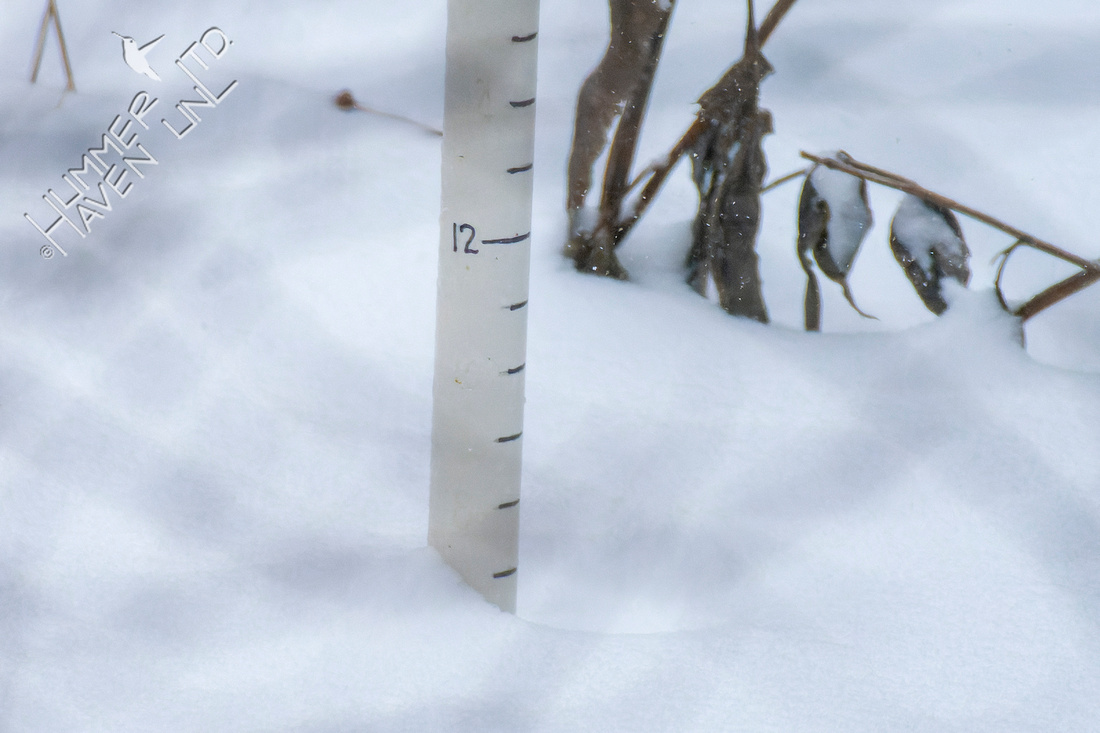 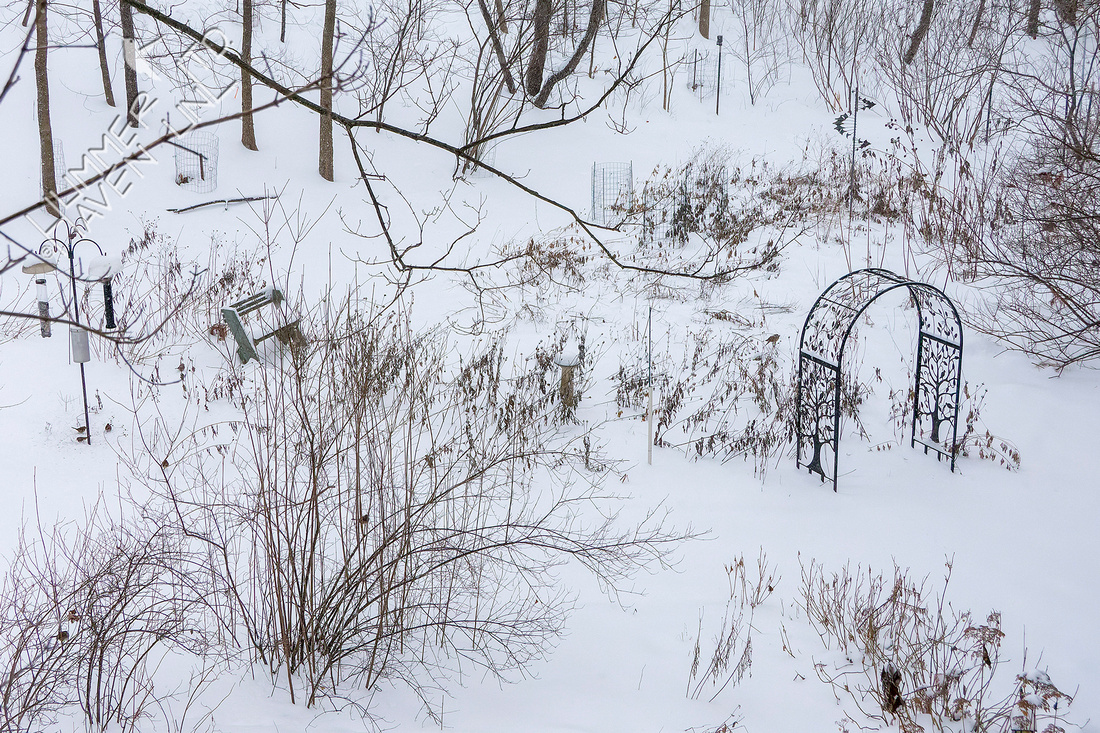 The Cooper's Hawk came back, trying to chase birds out of cover. The Carolina Wrens have their secret hiding places and have been very cautious. We ended up with over 7" of drifting snow. 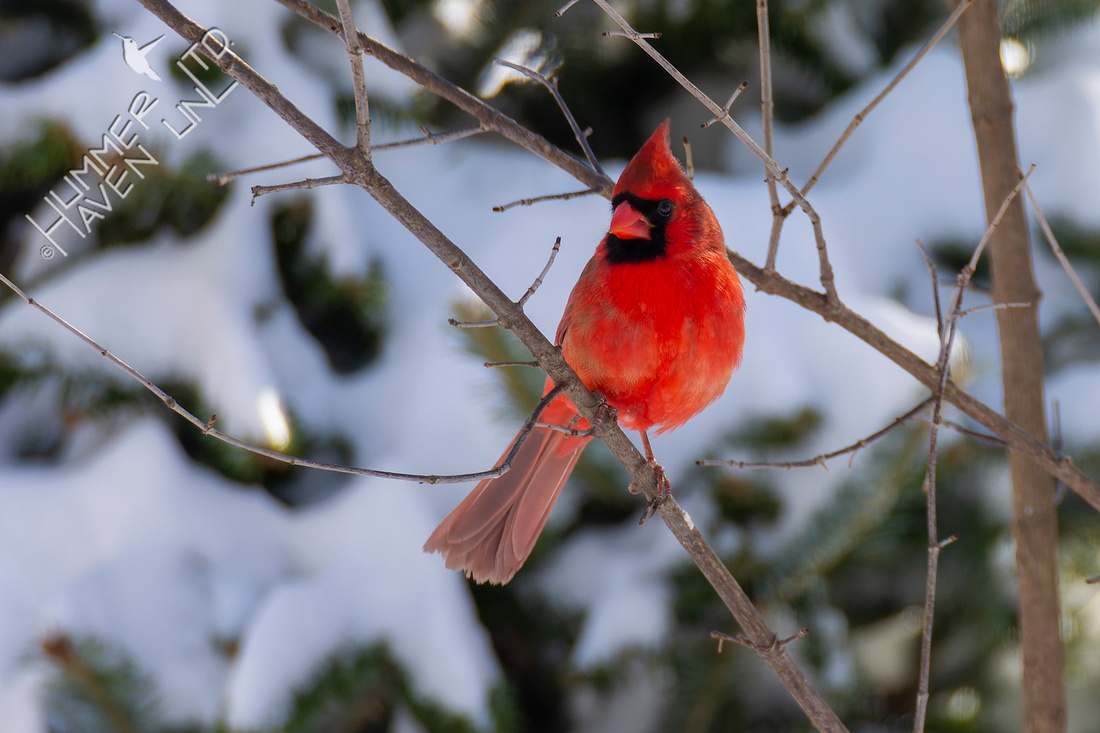 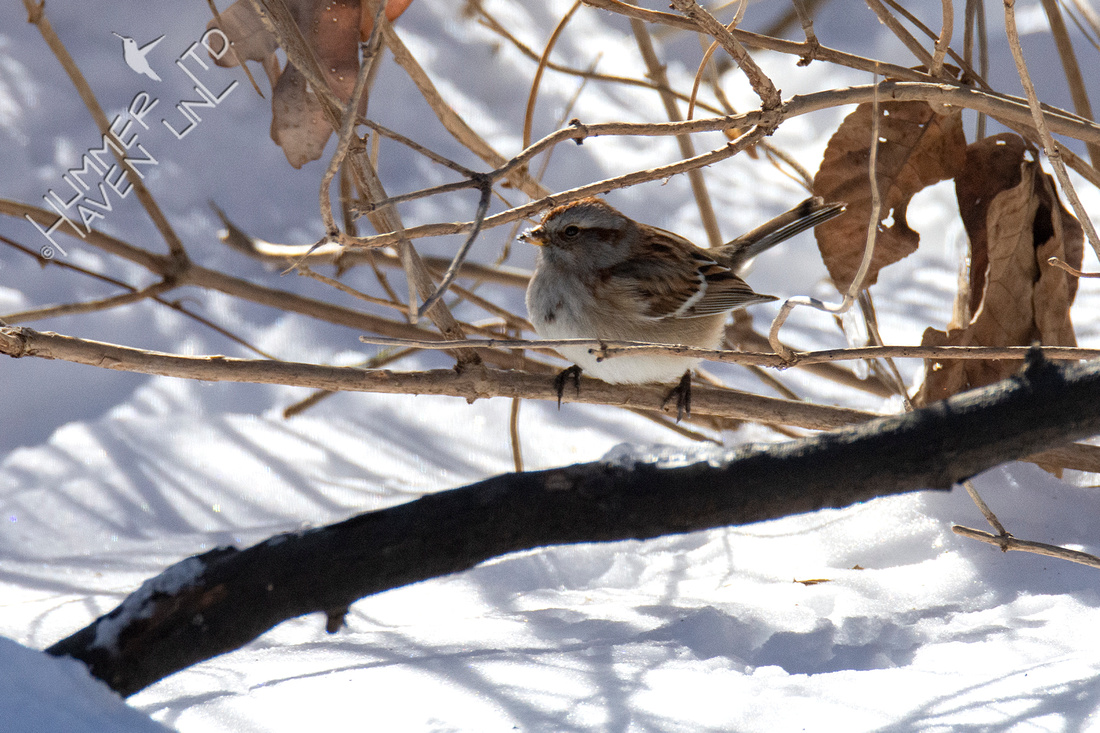 The sun came out and birds continued to look for food. The American Tree Sparrow popped out of the basin and rested in the hydrangeas behind the bubbler. That was the last time we've seen it; the Fox Sparrow must have moved on, too. 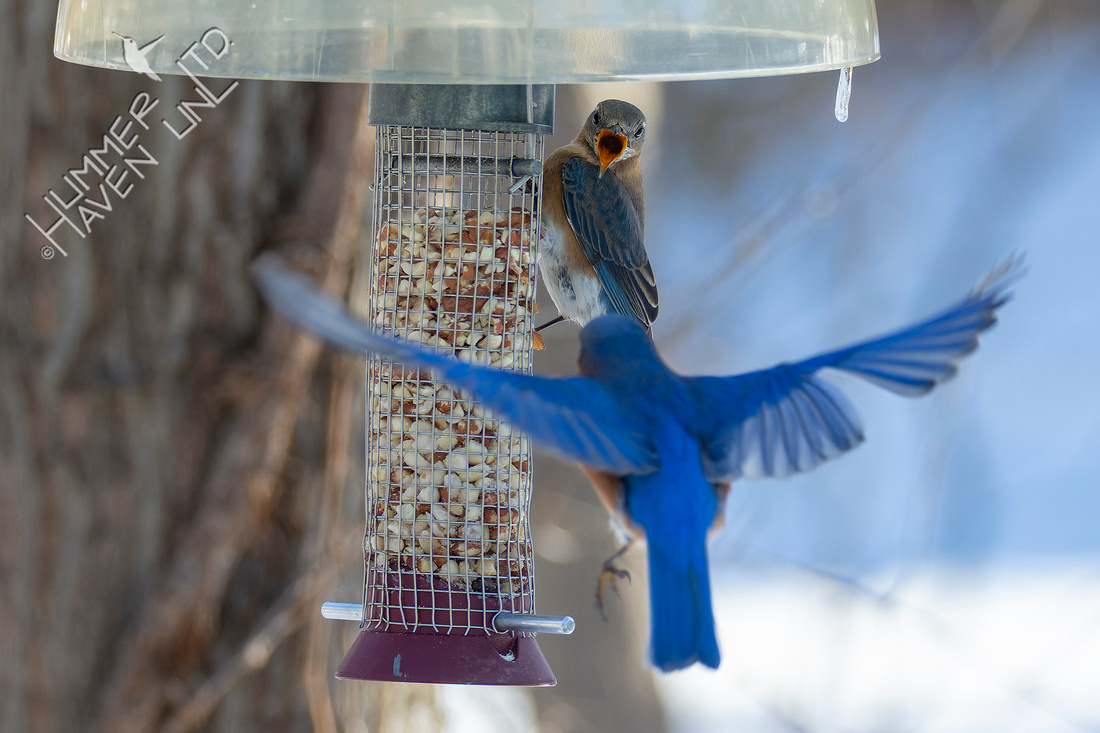 This peanut feeder has had more interest than we've ever seen. Even the bluebirds were scrapping over it when I was a bit slow to put out more mealworms. 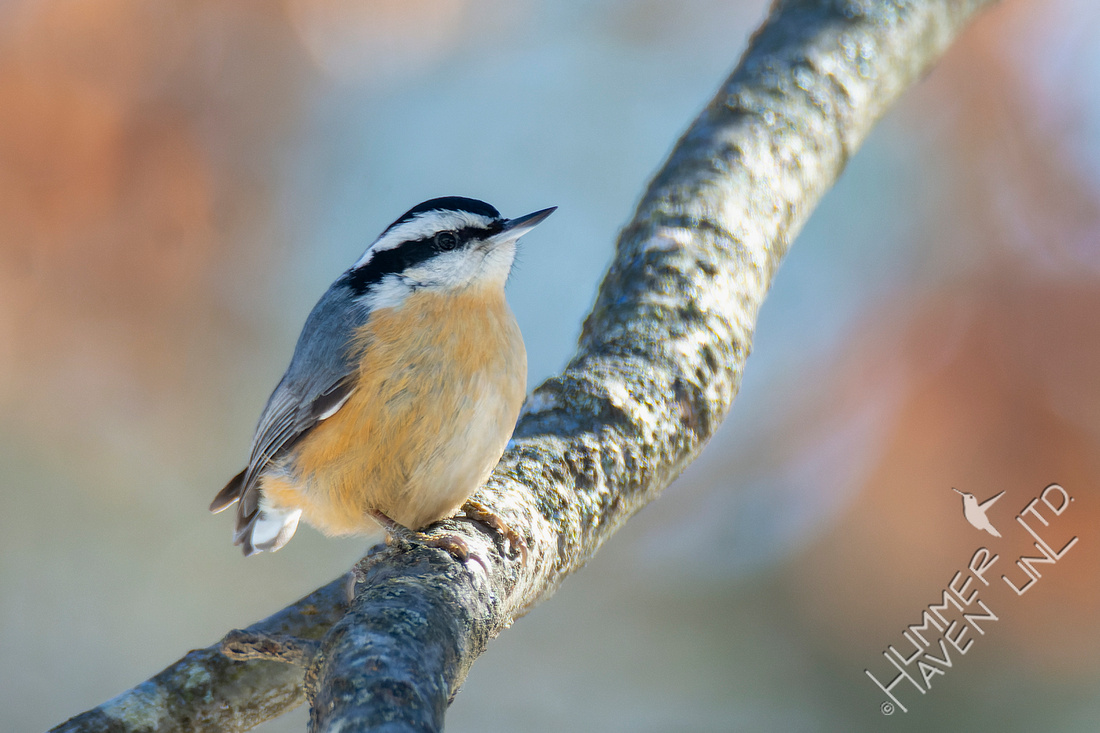 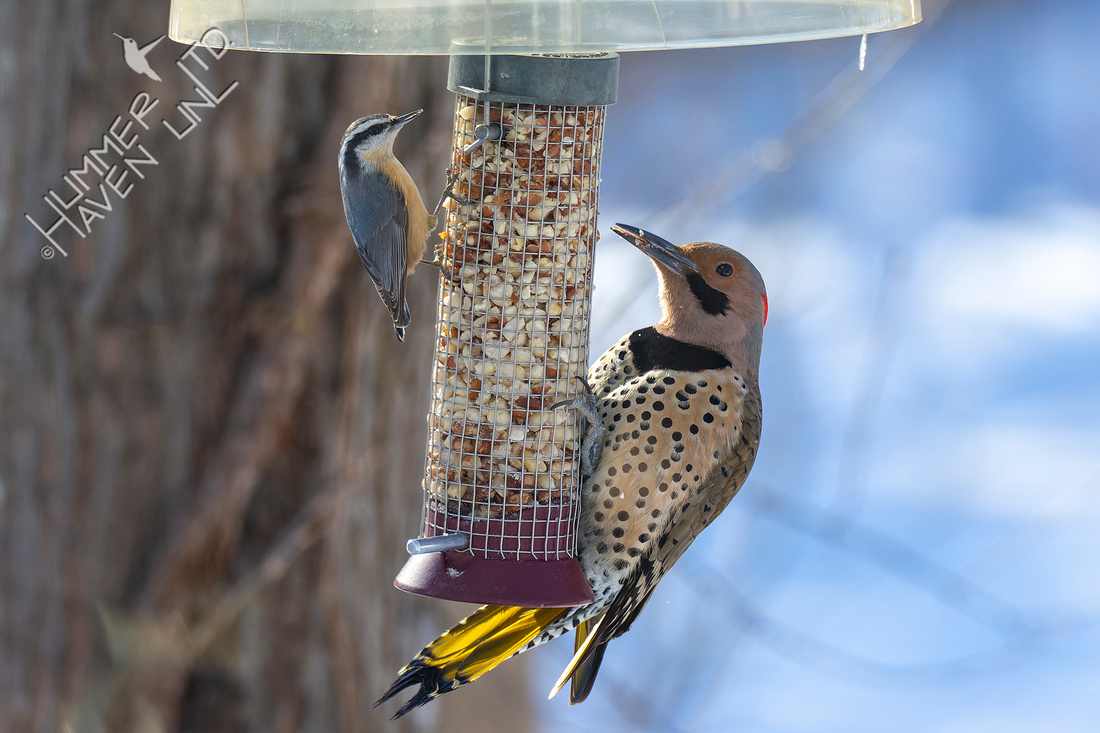 The Red-breasted Nuthatches claimed the feeder as theirs, but they've had to share. The male won't go to it if other birds are there, but the female? Ha, she has spunk! 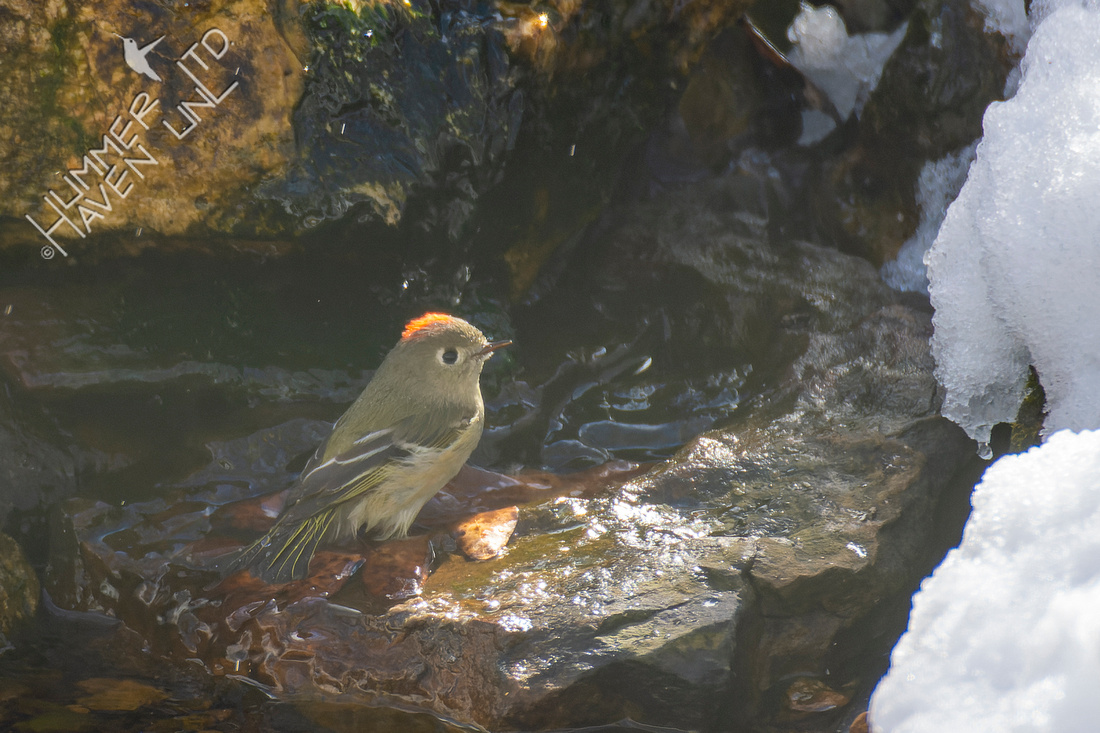 The Ruby-crowned Kinglet came back again to bathe on that sunny day. 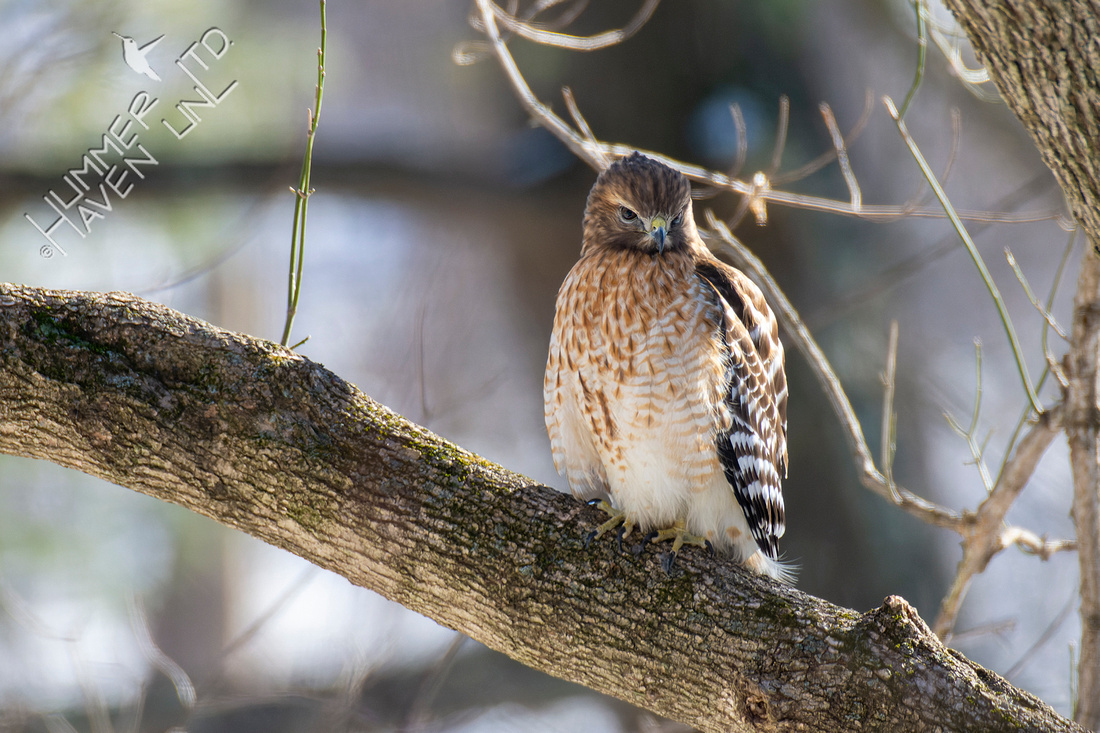