Parade of Fall Migrants and Visitors

Fall warblers have been here in different combinations of small mixed flocks since the last blog post. It has varied between 1 or 2 species up to 6 species seen on 10-1-20. This is always an interesting season with birds moving south for the winter and for some, our area is their winter home. Let's look at the warbler group first.

Tennessee Warblers are first to be shown and the second image demonstrates what all the small birds are after, caterpillars! Just as in spring, this food source makes up the major portion of their diet. From tiny inchworms to much larger caterpillars, they're looking underneath leaves to find them and tug them away. All that protein is worth the effort! 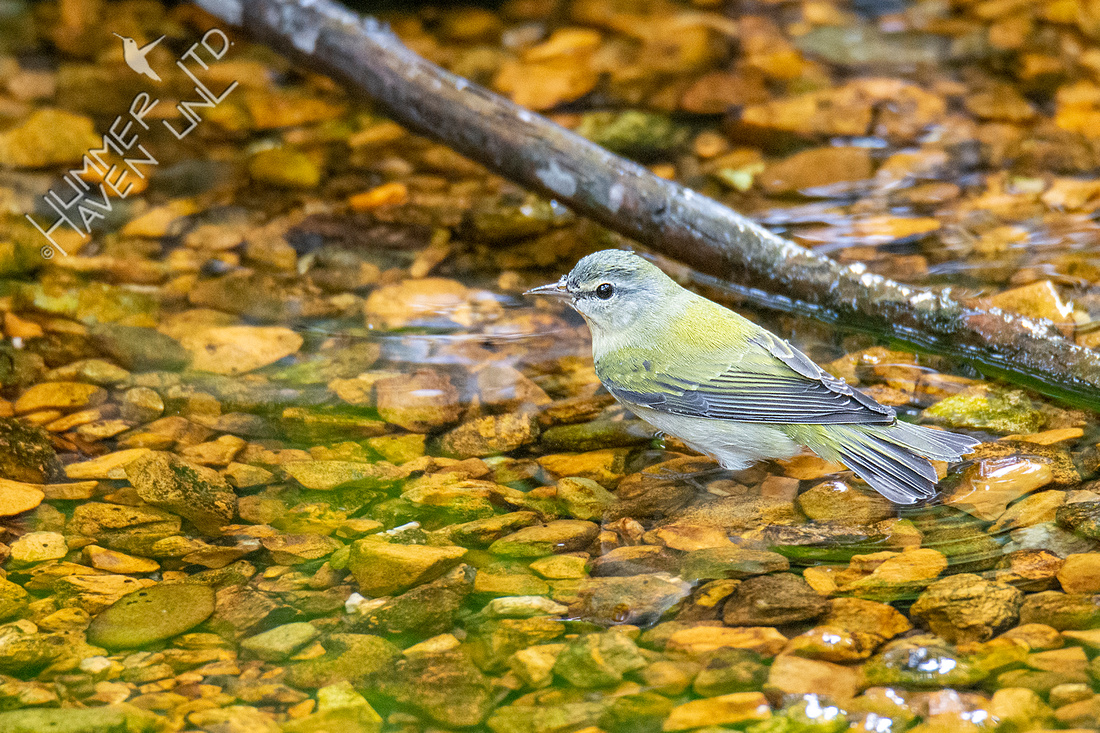 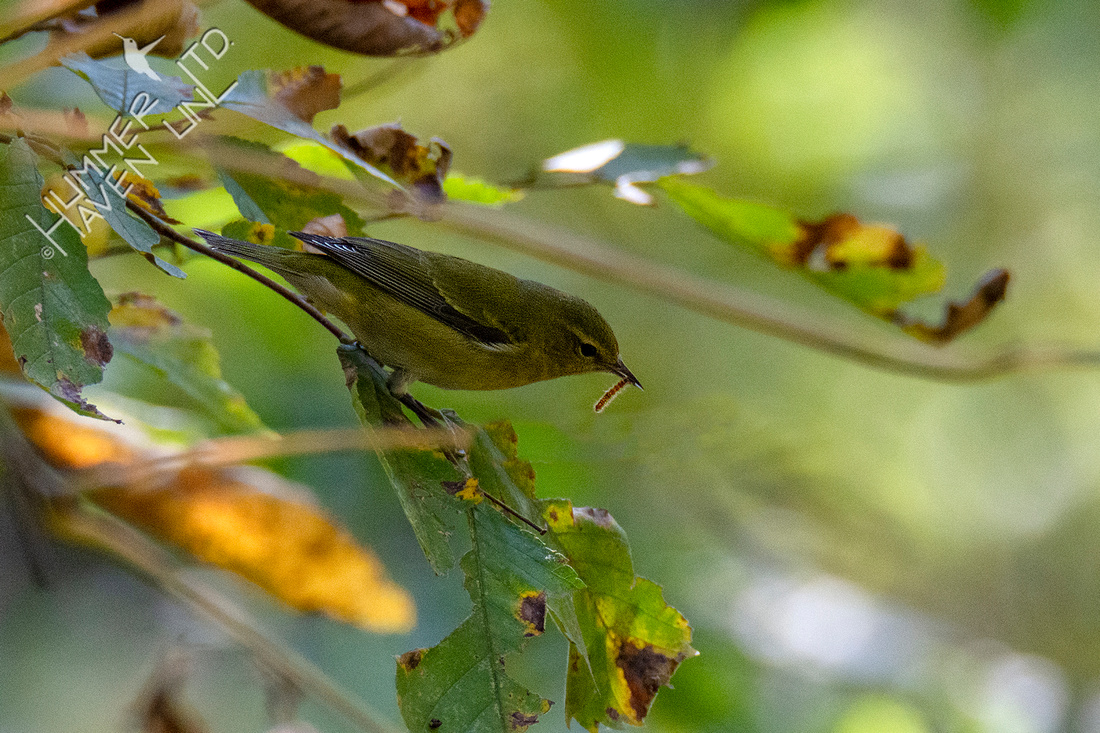 10-9-20 Tennessee Warbler with caterpillar on Elm

Bay-breasted and Black-and-white, Black-throated Green and Chestnut-sided Warblers have been seen, foraging and coming in for water. 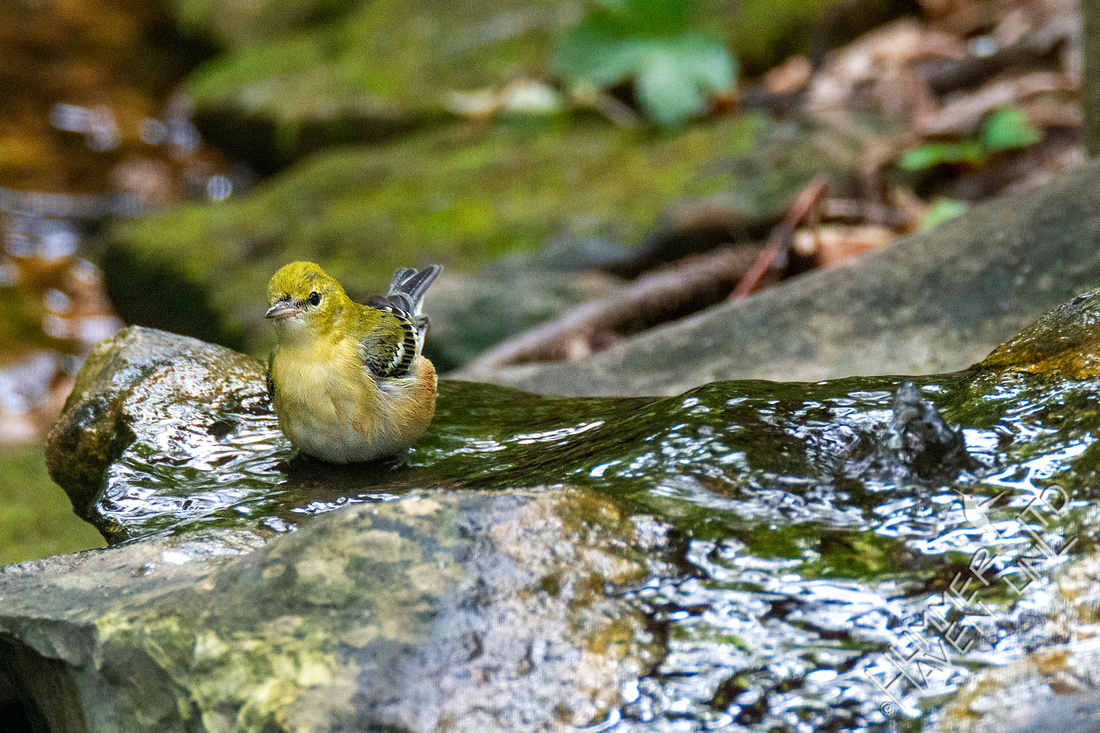 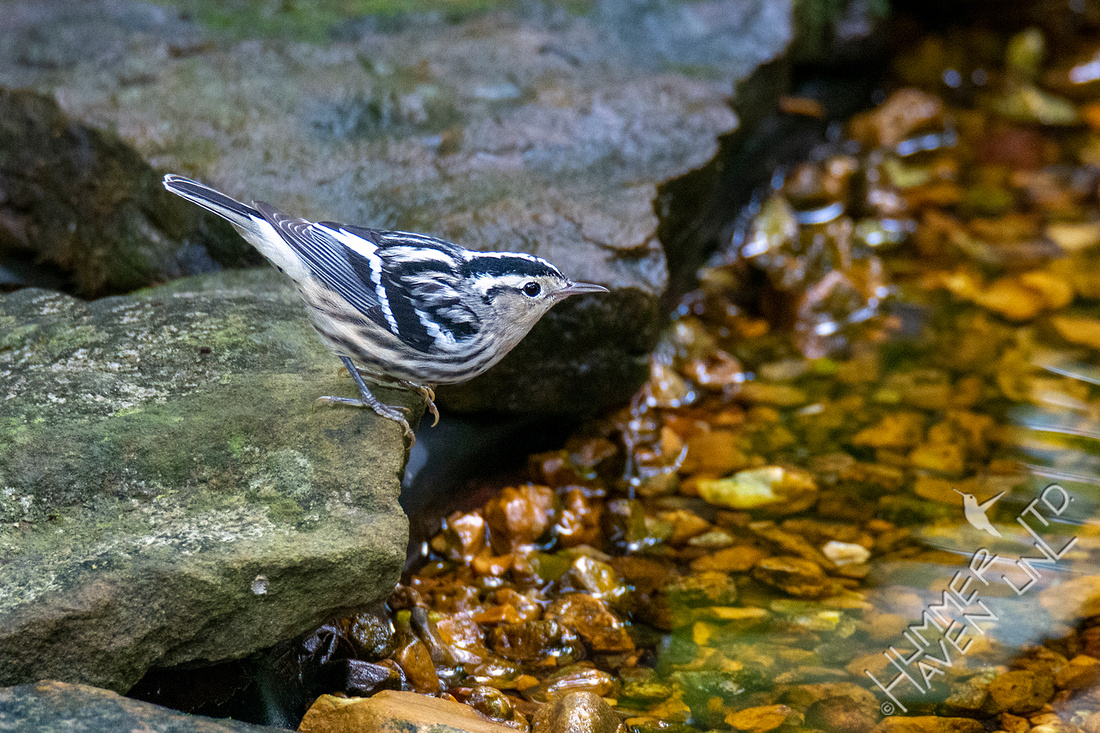 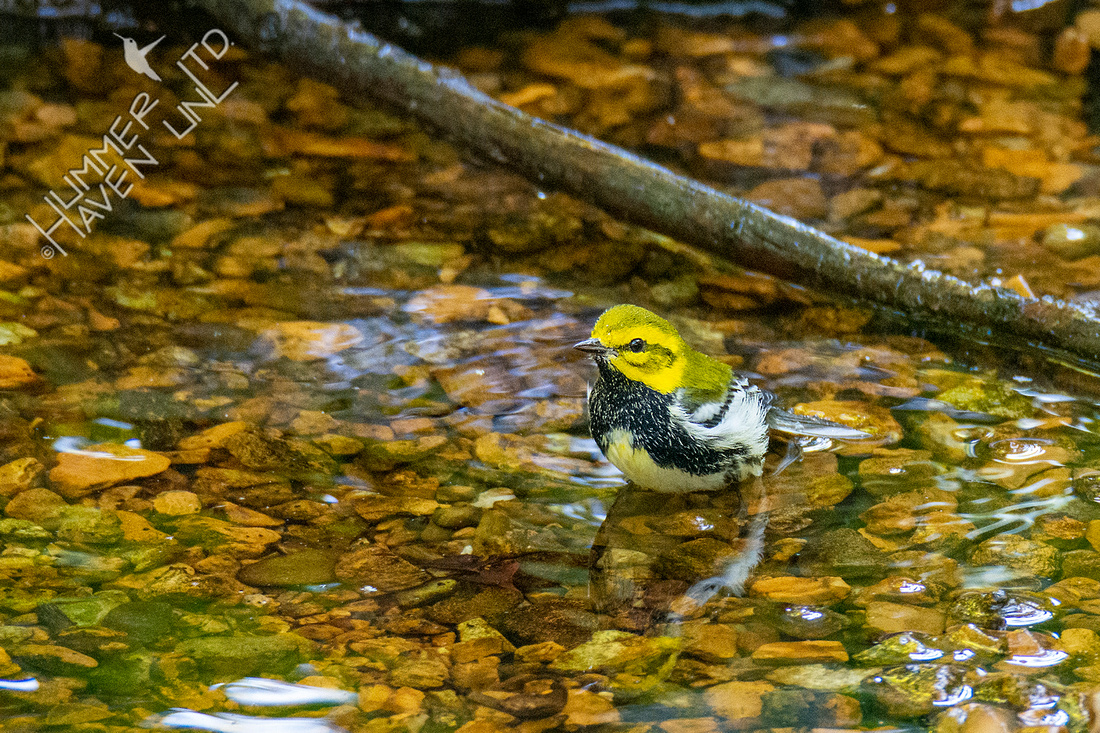 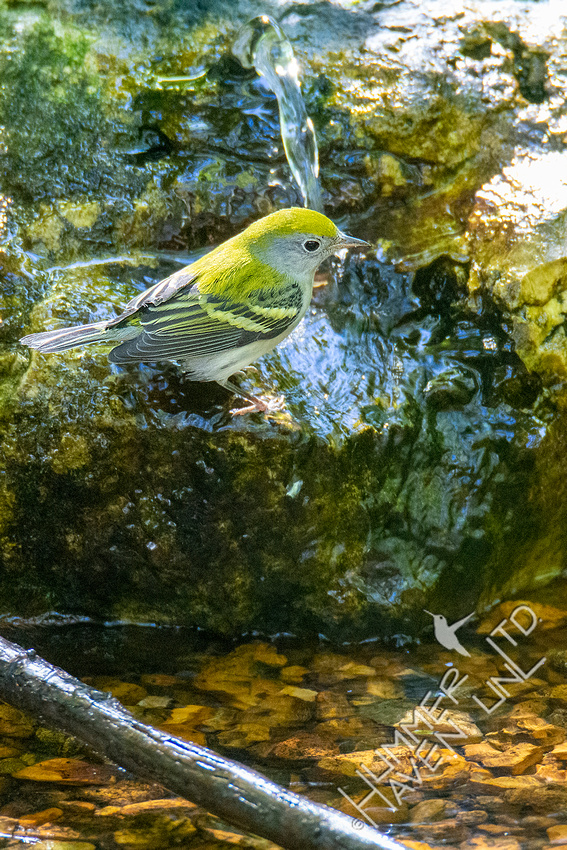 Magnolia Warblers have pretty much gone through now, but Nashville Warblers are still around. 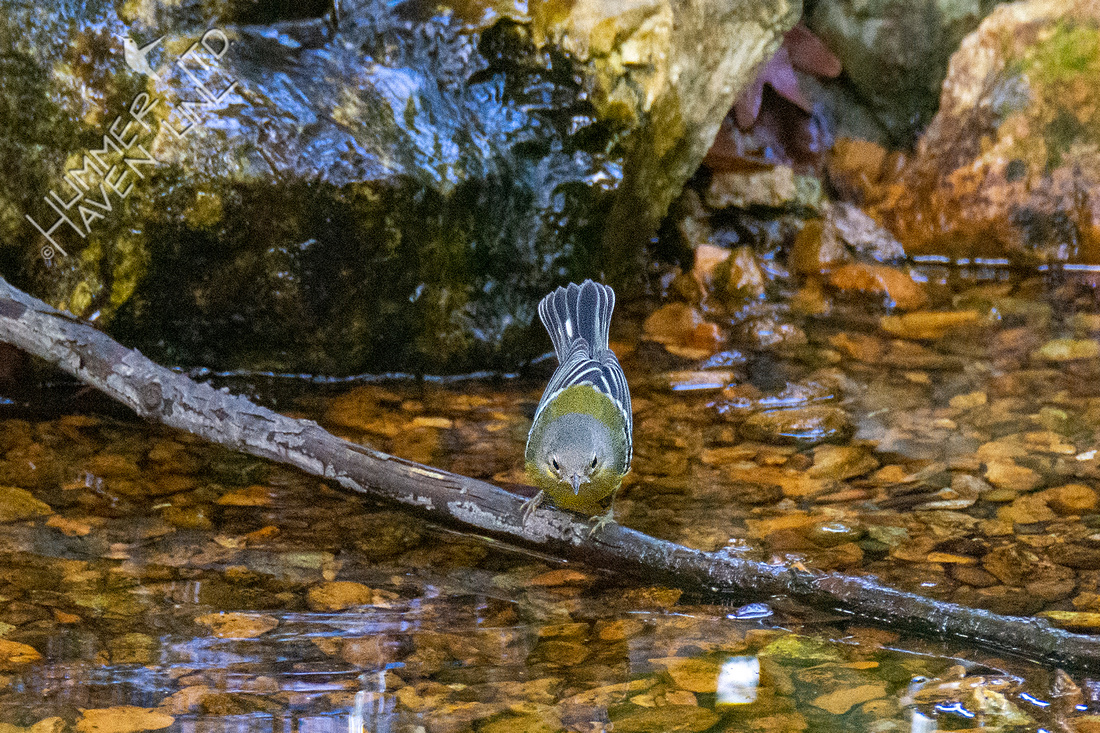 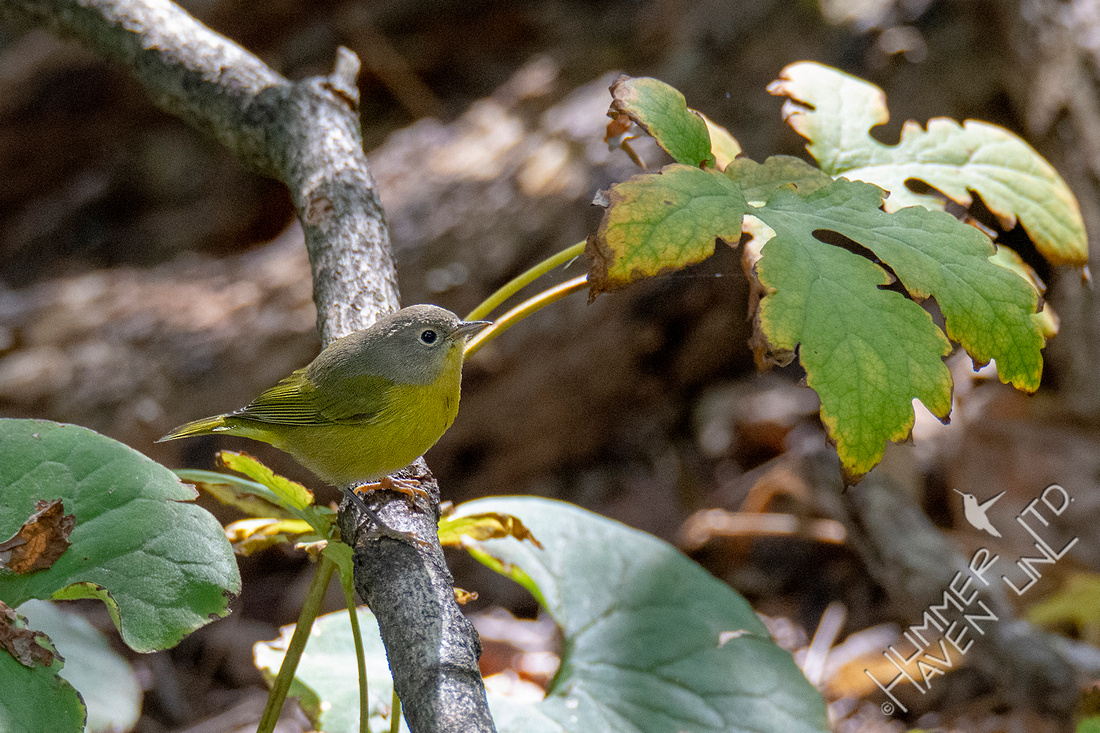 The first Yellow-rumped Warblers have arrived and are the main warbler species expected to be seen during the winter. This female took a dip at the pond, then grabbed a small ant from the fish-feeding rock to eat. 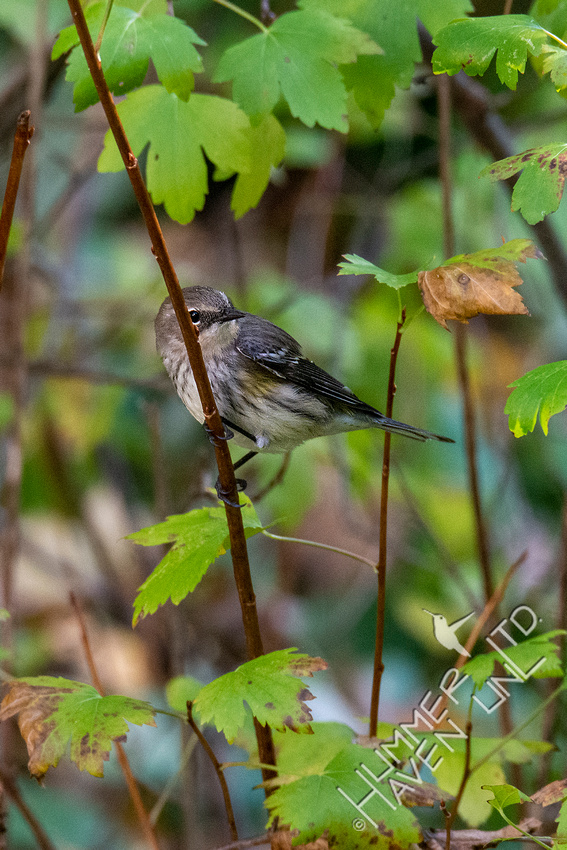 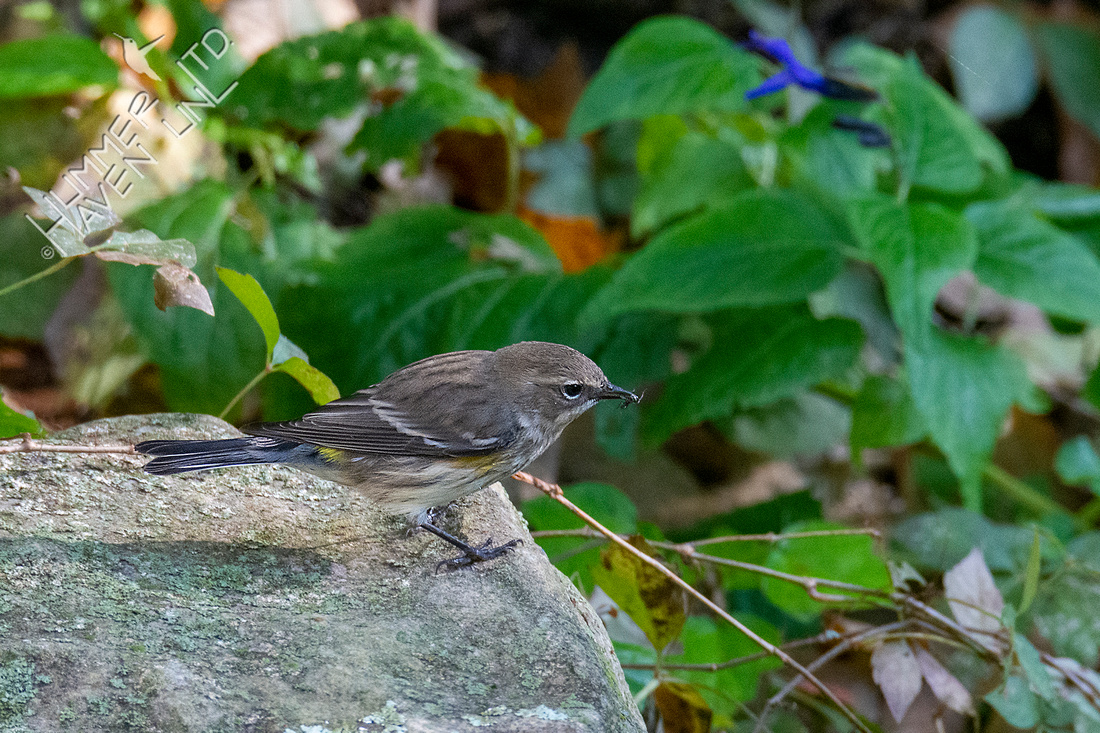 Other tiny birds sometimes mistaken for warblers are the two Kinglets. Male Ruby-crowned Kinglets don't really show their crowns unless they're excited, but both male and female Golden-crowned Kinglets always show some yellow. When the males get excited is when you see their fiery orange crowns. 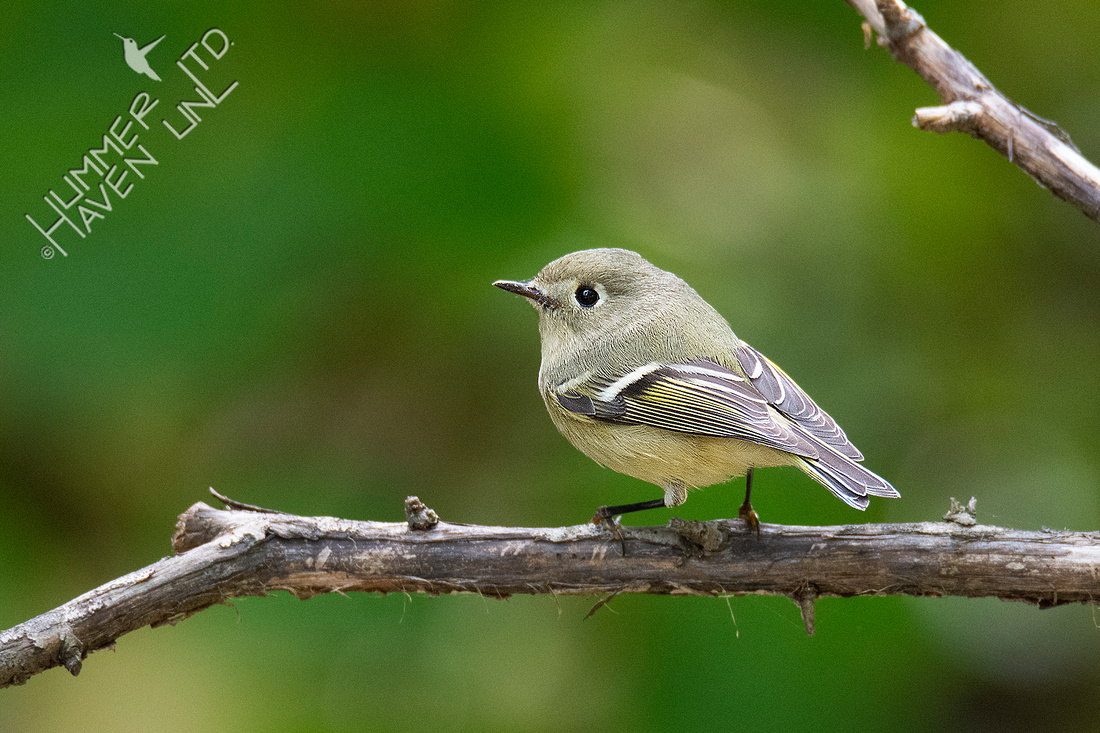 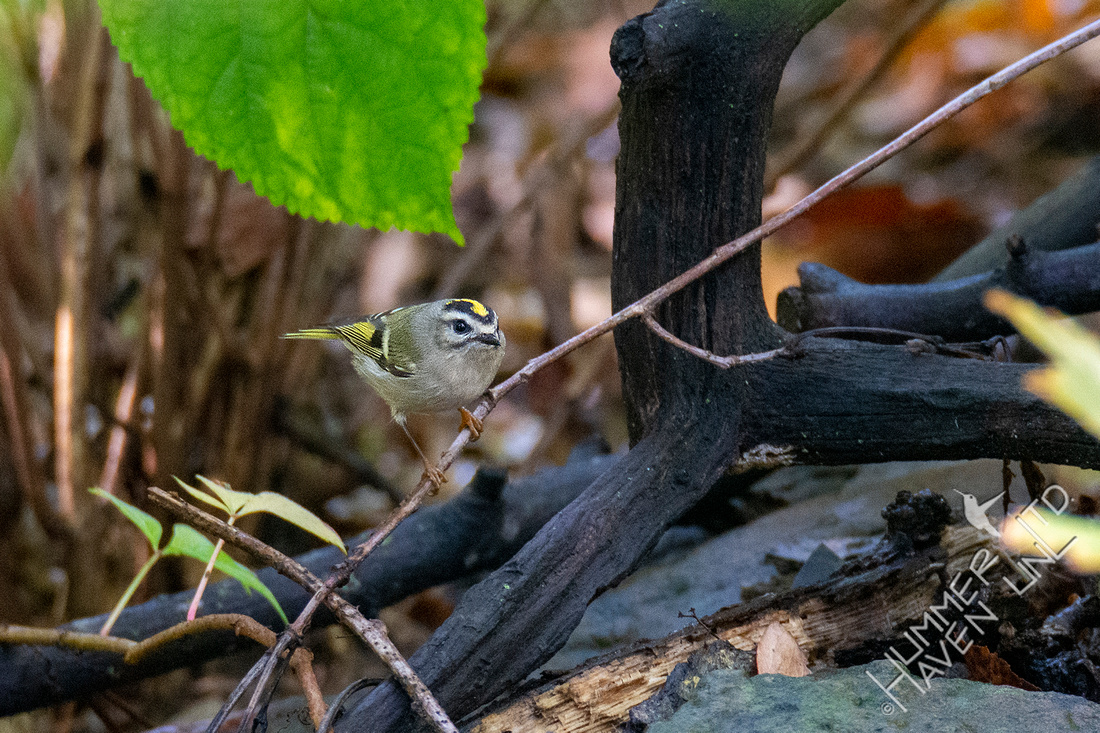 Finally had a Brown Thrasher at the bubbler on 10-1-20. It was very early in the morning, and the bird seemed glad to get some water. A young Red-eyed Vireo checked out the bubbler, too. Its eyes are still brown rather than red, which indicates its age. 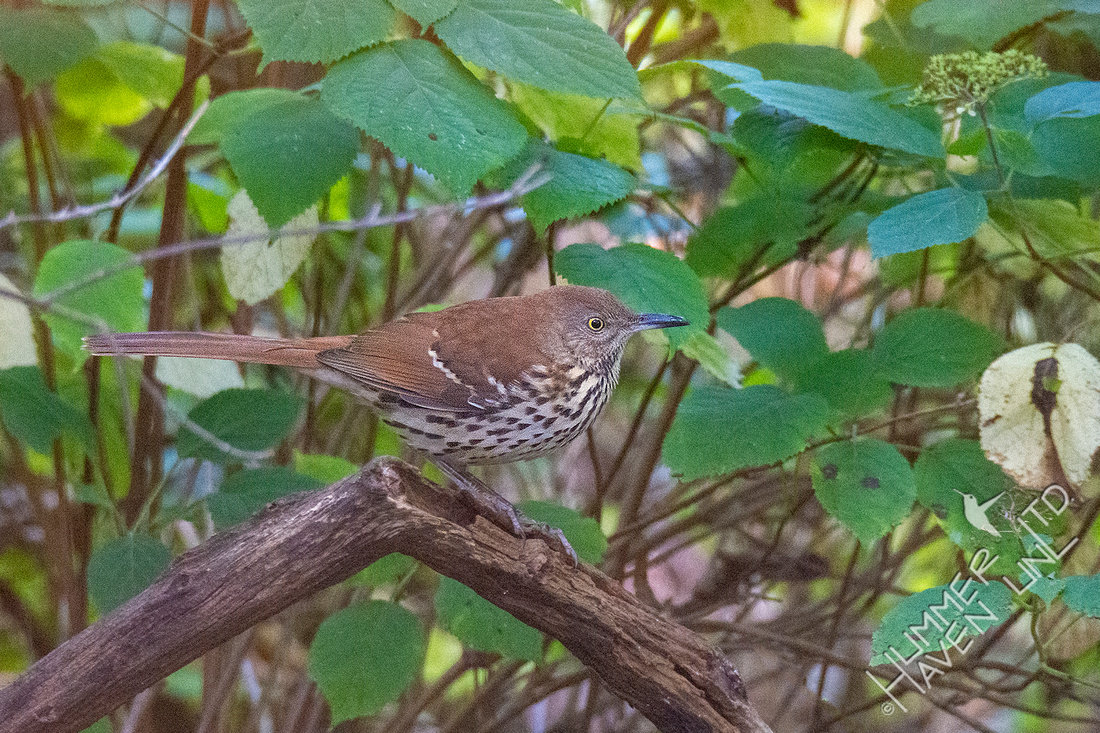 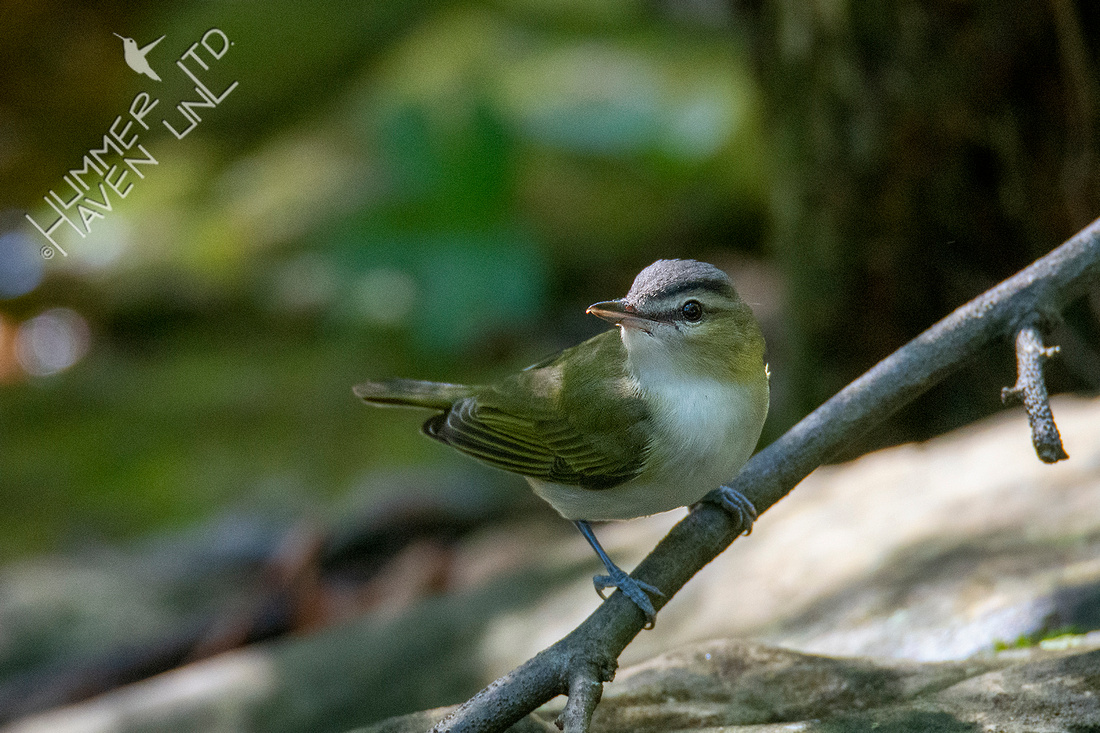 Another female Summer Tanager was seen on 10-2-20. Ruby-throated Hummingbirds are still coming through but in much smaller numbers. I saw two last Sunday, and one at the black-and-blue salvia flowers on 10-5-20. They may be seen through the month, but after that, rarer hummingbird species may show up. 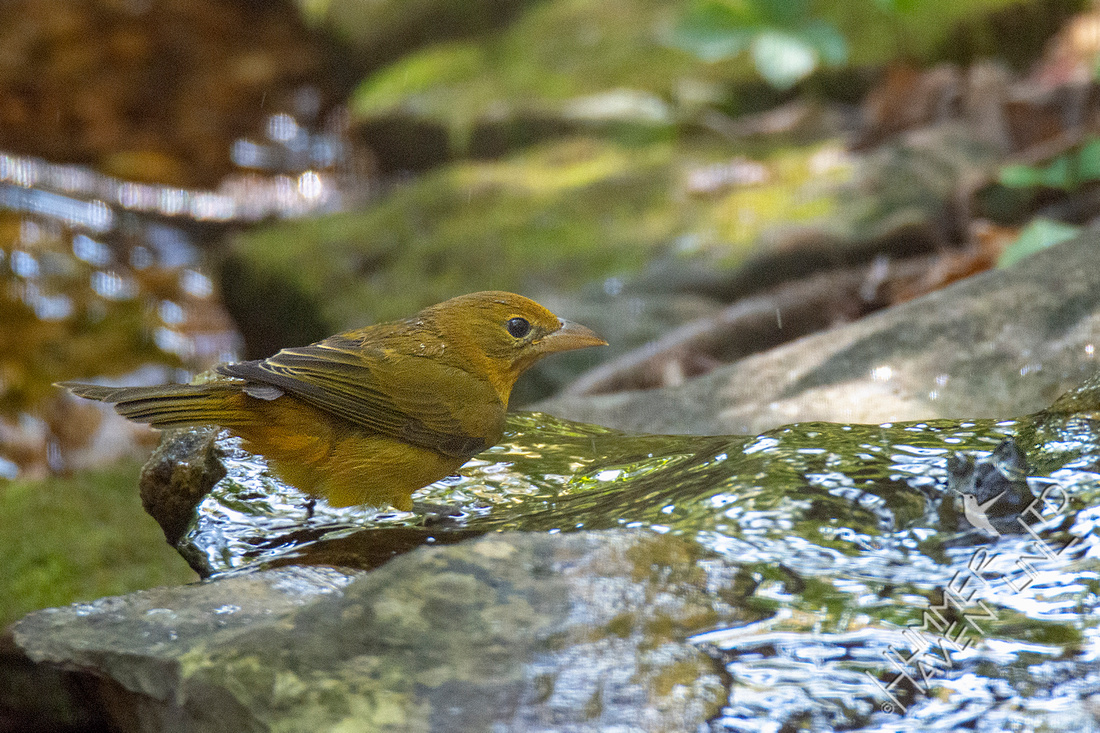 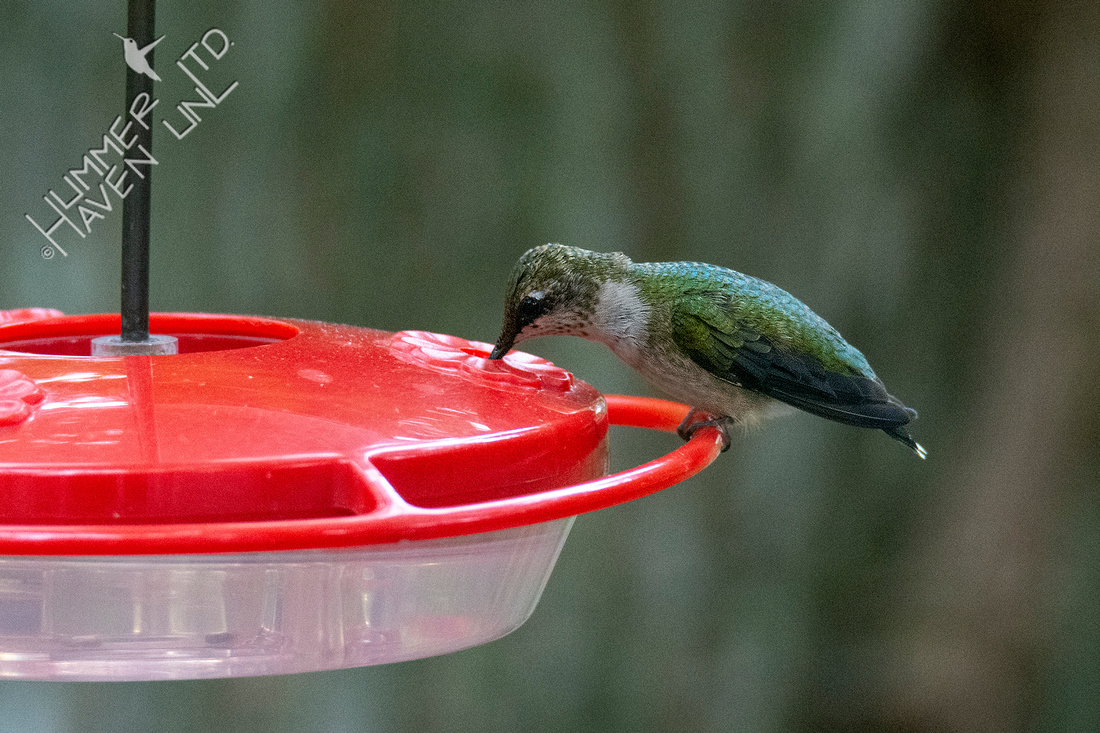 Eastern Phoebes may hang around a while and they only go as far south as they have to in order to find insects. I've seen one almost every day, fly-catching here. 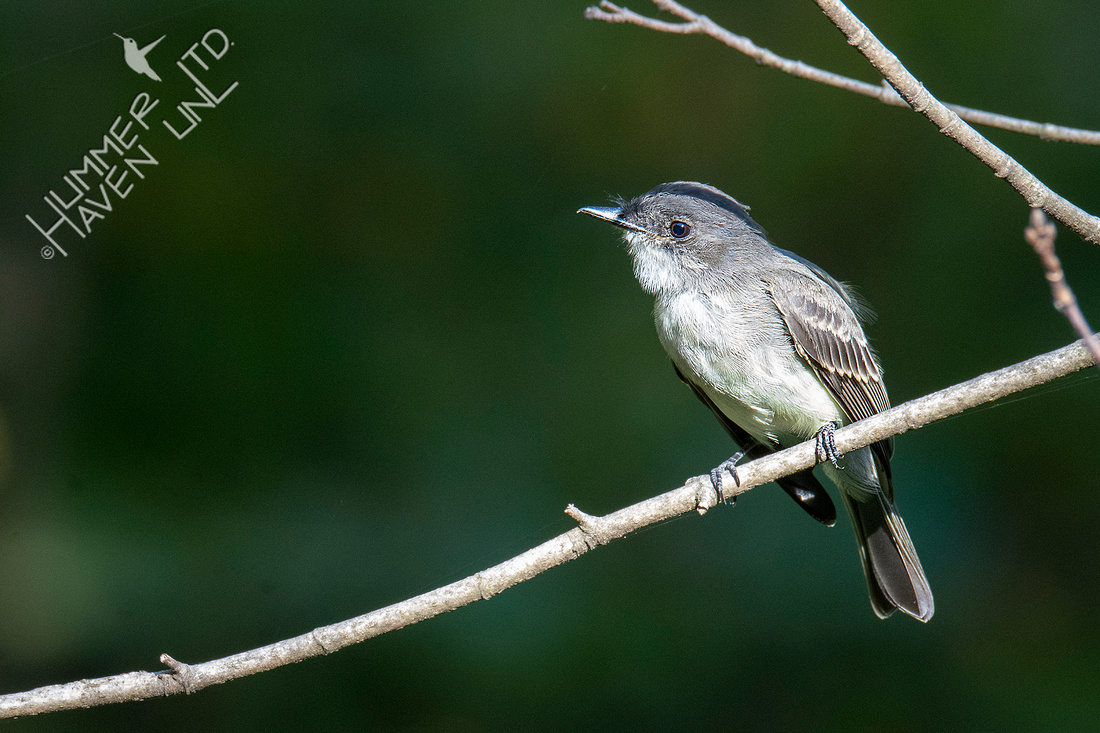 American Robins are moving through and we had at least two dozen a couple days ago. Anywhere we had water, they were there. They also were checking the Beautyberries, which aren't quite ripe yet. When the leaves flag yellow, they'll be ready. 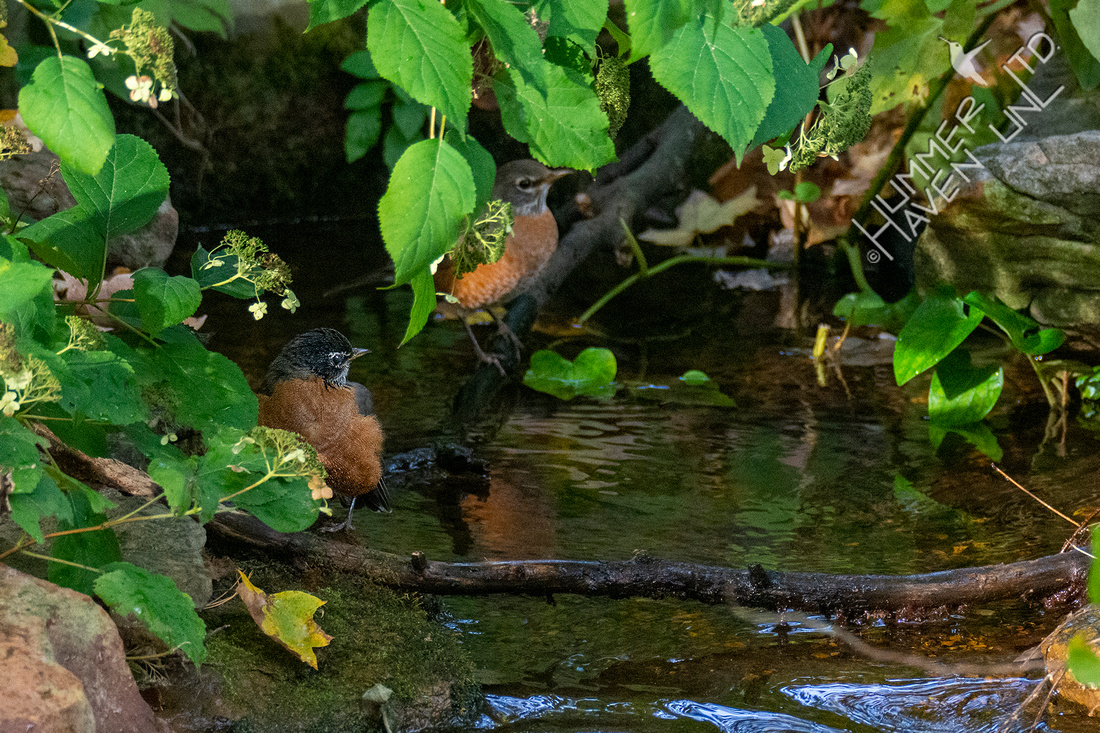 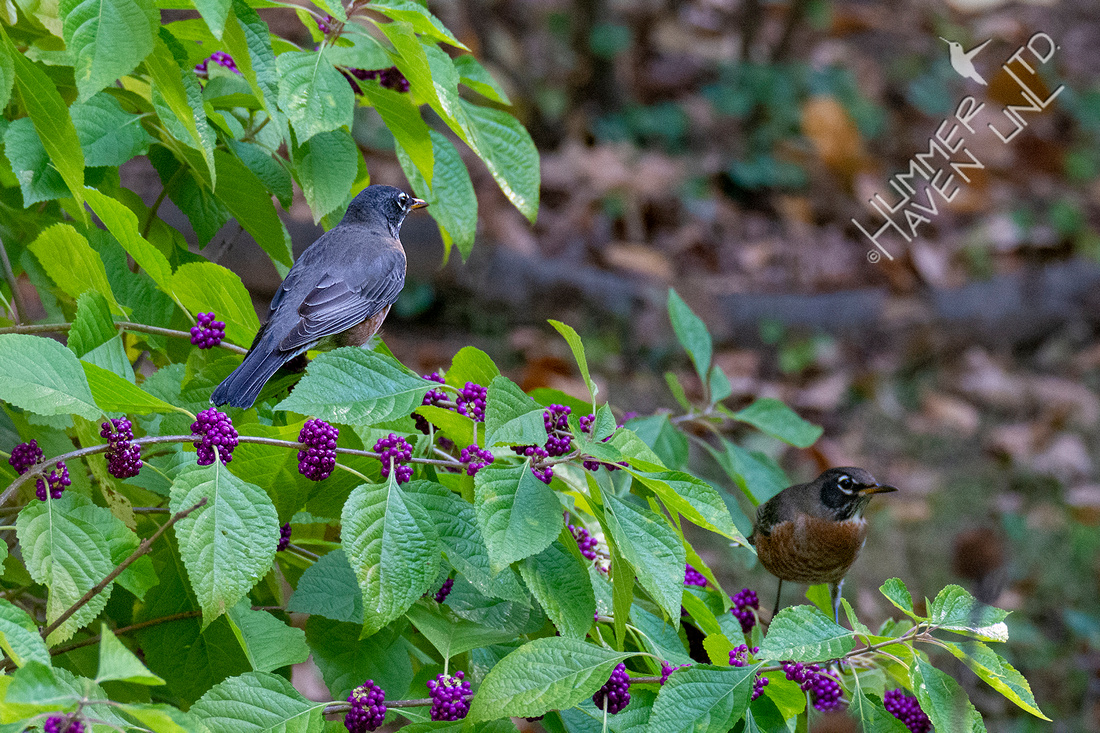 There were two nice surprises on 10-6-20. The first came early in the morning when a "murder" of American Crows from the neighborhood was circling the top of our pond cypress and having an absolute fit! When they behave this way, there's usually one sure explanation, the presence of a Great Horned Owl. I went out and found it readily, but the bird had hidden itself deeper in the tree by the time I got back with the camera. This large bird was #117 for the year list. 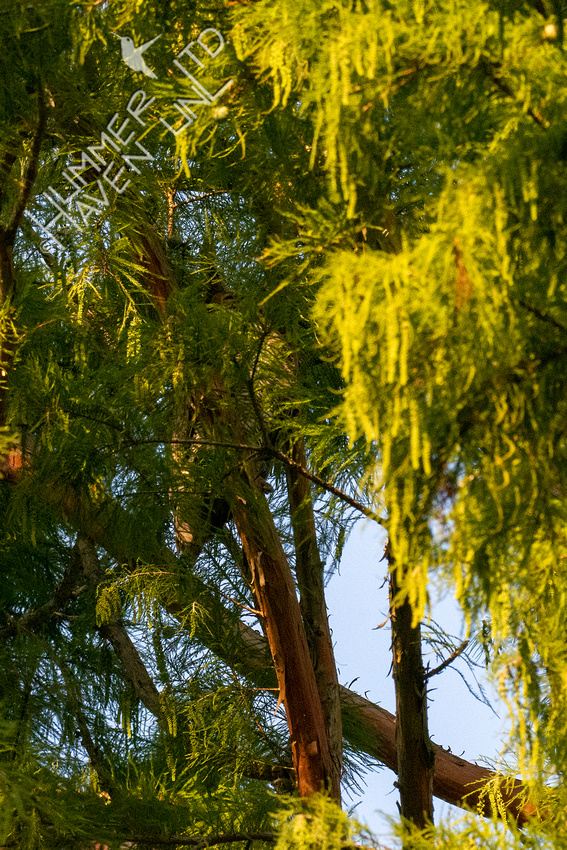 The crows had been taking turns at sentry duty, but they started to take 15 minute breaks when the owl was apparently asleep. Well, the owl gave the crows the slip at some point mid-morning. It got busy with other birds finally coming in. About 1:20 pm, we had just finished a late lunch when I heard a Pileated Woodpecker, which has been calling more in the last few weeks. Then, Dan saw it fly to the small oak by the bubbler. Wow, what a great bird to have come in close! They're our largest woodpecker at up to 19.5" long. It was eating ants on the tree and even some of the bark butter I had put out. Thankfully, I was ready for this second surprise! If you look closely, you can see the red feathers in its 'mustache' which indicate a male. Soon, I'll have some comparison photos with the other woodpeckers to share. 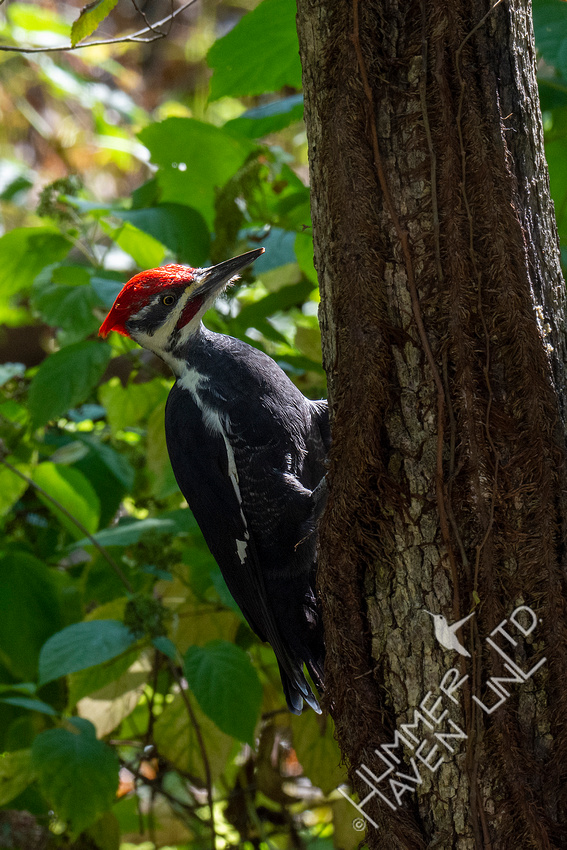 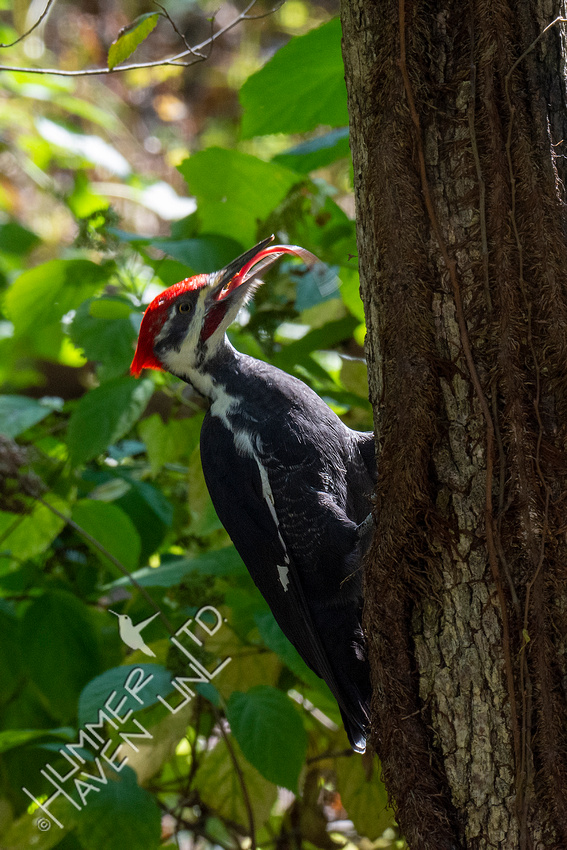 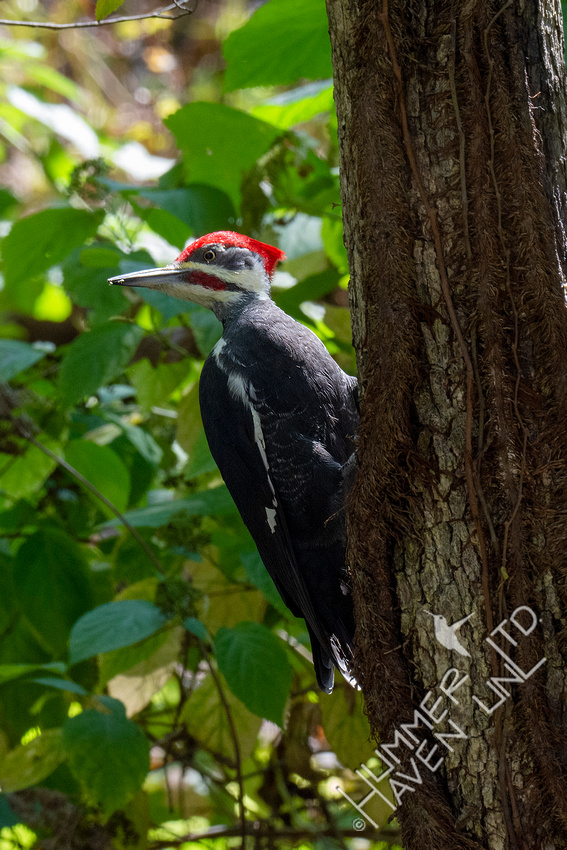 To learn more about the bird:  Pileated Woodpecker

Last but not least, our FOS (first of season) Hermit Thrush arrived on Thursday, 10-8-20. It was back again this morning to enjoy a bath. As it preened, it would raise and slowly lower its tail, a signature move by this species. 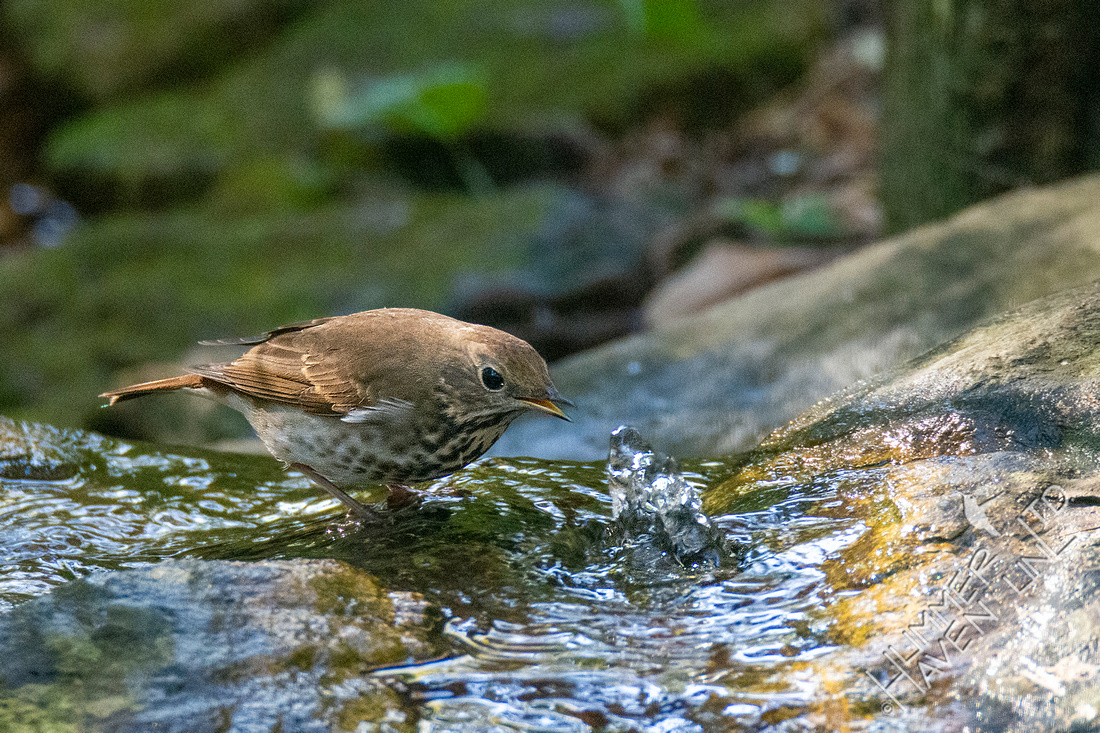 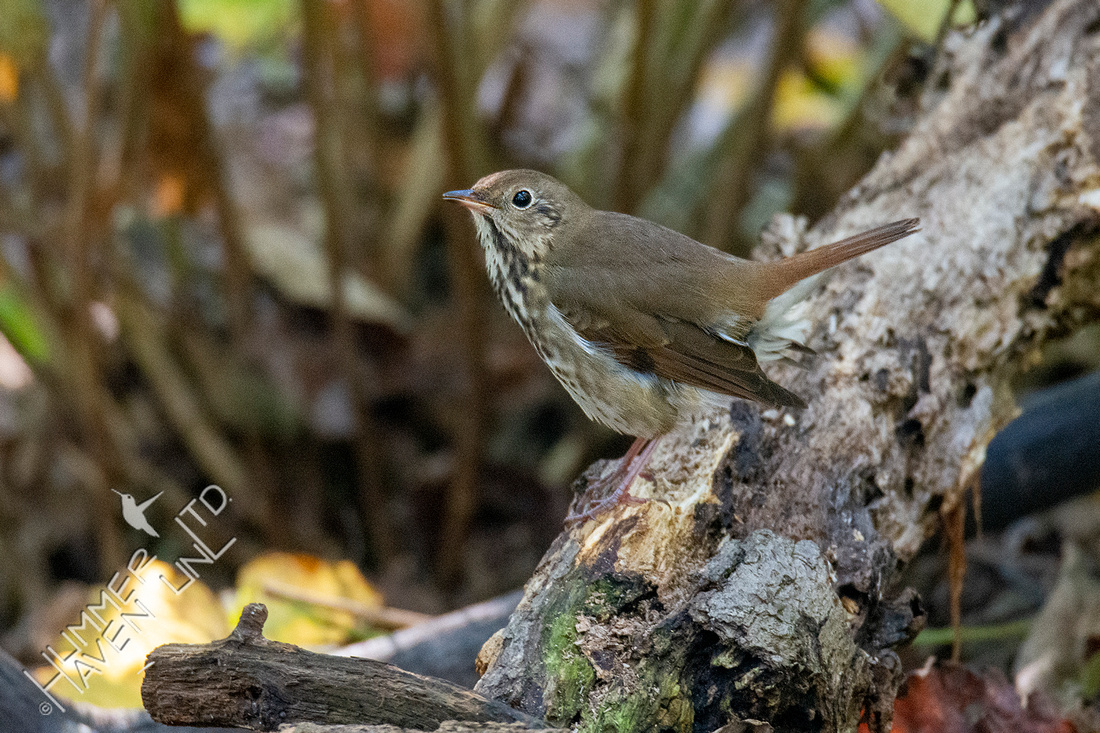 To see all the photos since the last post, begin here:  Images from 9-29- and on