It has been eleven days since I last posted and so much has happened! We were away visiting family for four of those days, too. Butterflies, caterpillars, hummingbirds, bluebirds and even a warbler have livened up the sanctuary. So, here goes...

I found another Red-banded Hairstreak, maybe we will have a little colony of them here. This one was a bit tattered. Later, I was able to catch one very close with the macro lens. What a tiny gem! 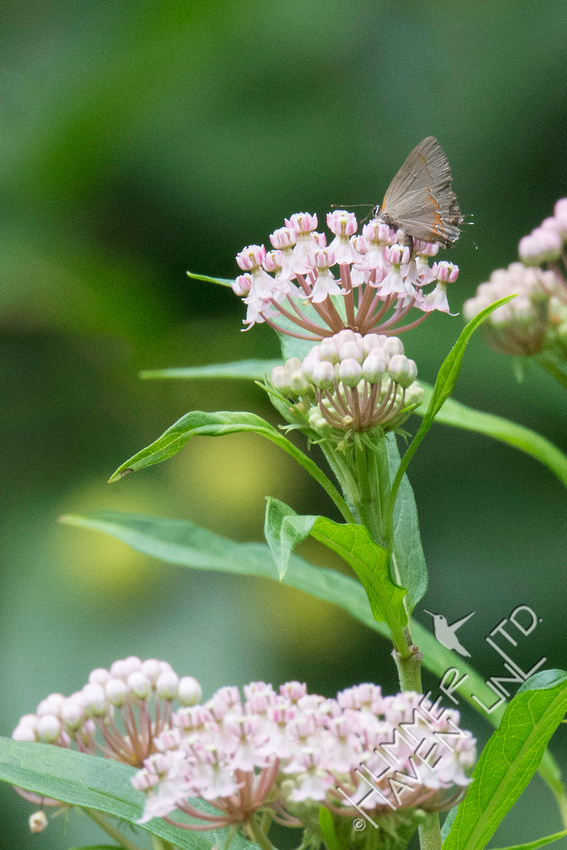 On the sad news side of things, I took off my rose-colored glasses and finally realized that the Black Swallowtail chrysalis was... empty. It must have been a meal for another creature. Such is life sometimes. 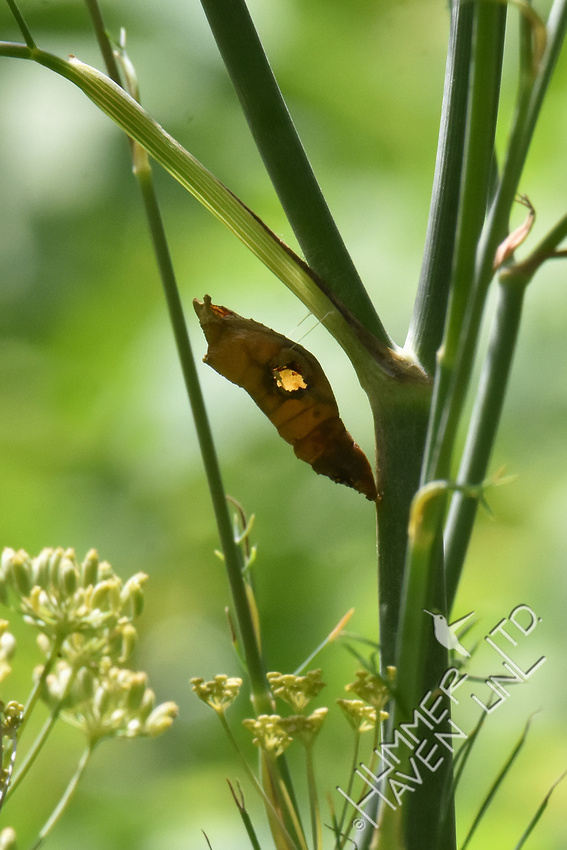 The Rough-leaf Dogwoods have produced an incredible amount of berries this year. American Robins had been perching in the small trees, waiting, willing them to ripen. 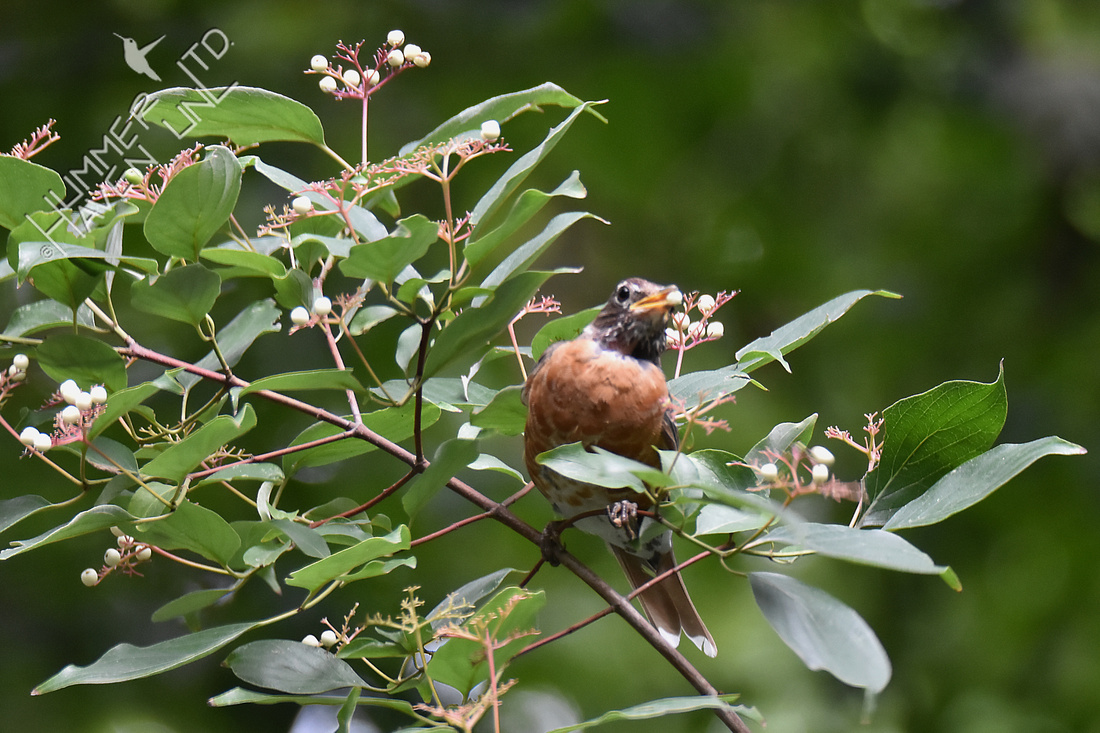 I had been hearing Eastern Bluebirds for several days. "Queedle" or "turee," so they say. Maybe, it's best just to listen to it to get the idea.

It was kind of driving me crazy, we've never had them around in the summer. Sure enough, like their Robin cousins, they were also waiting to eat the berries. I saw two juveniles on Thursday, 8/9/18. 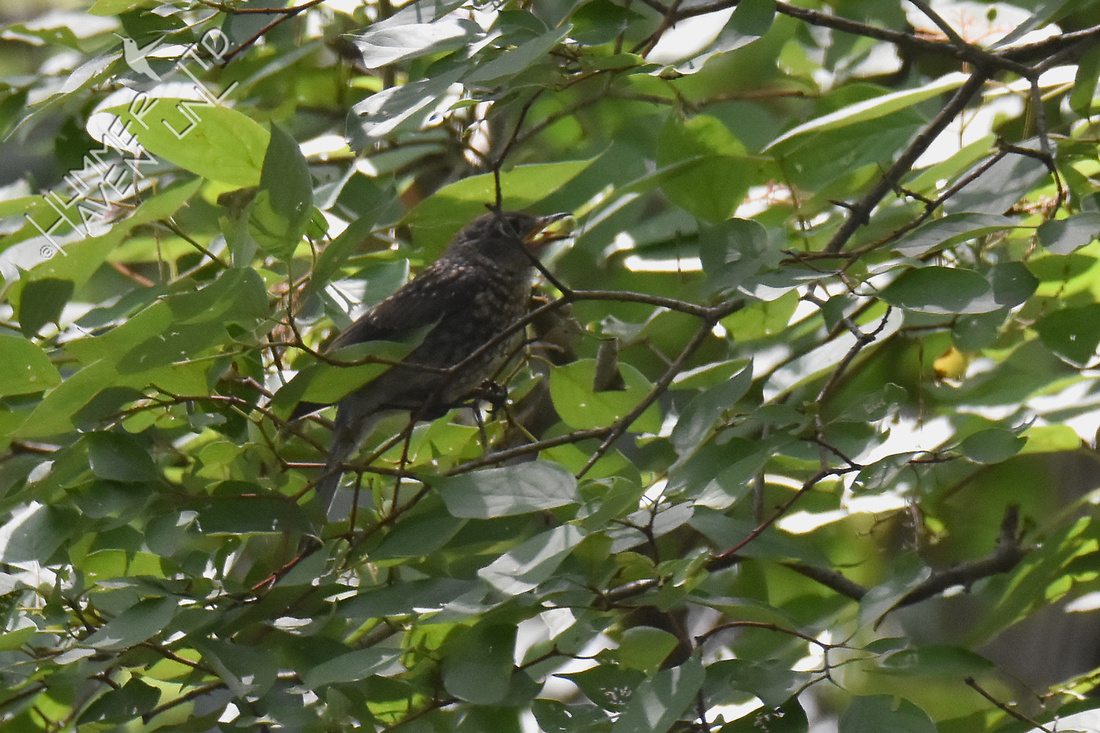 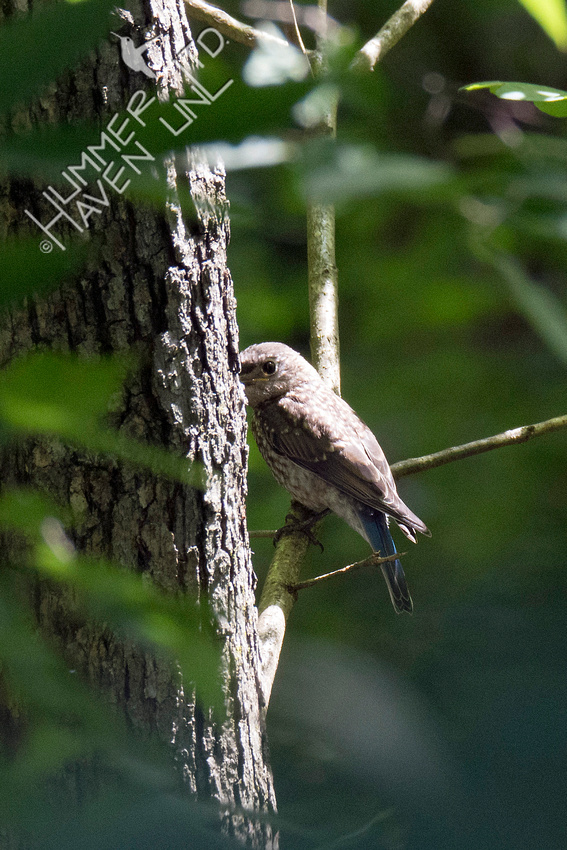 That evening, I had finished packing and come downstairs. As usual, I went to the window to check the Bubbler and to my surprise, there was a Kentucky Warbler! Another new summer sighting! 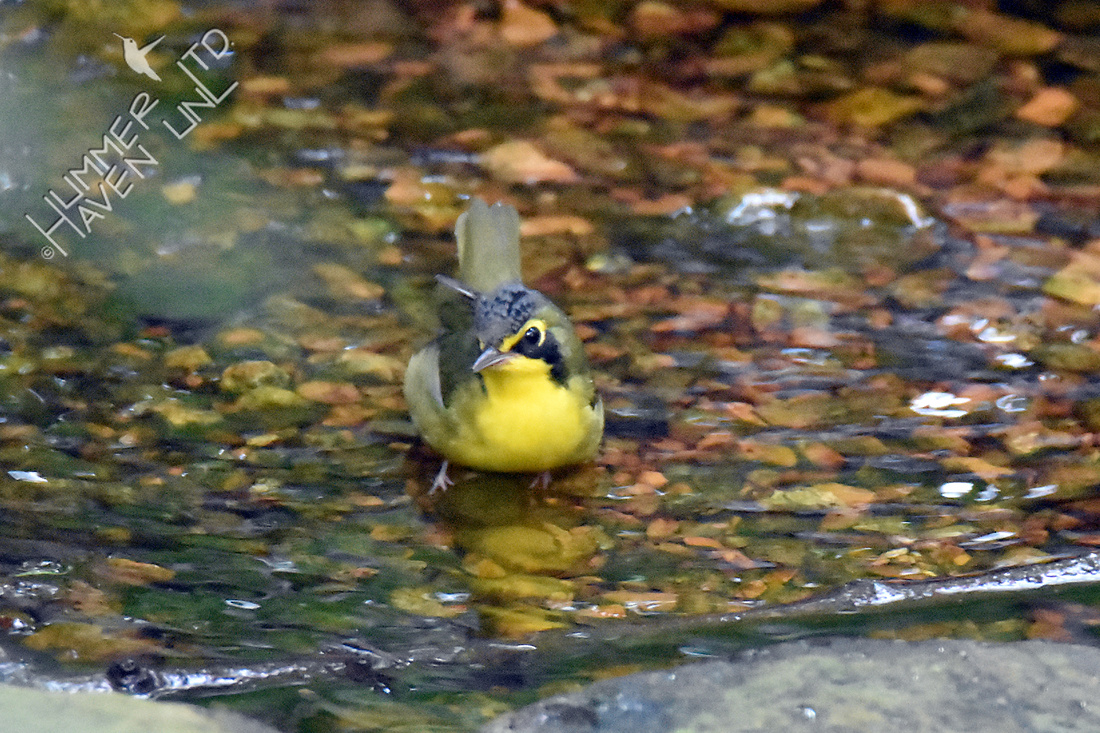 We weren't in a big rush to get away the next morning. Good thing, because the Eastern Bluebirds were back. I saw four of them, and the male was in the dogwoods near the driveway, feasting away. 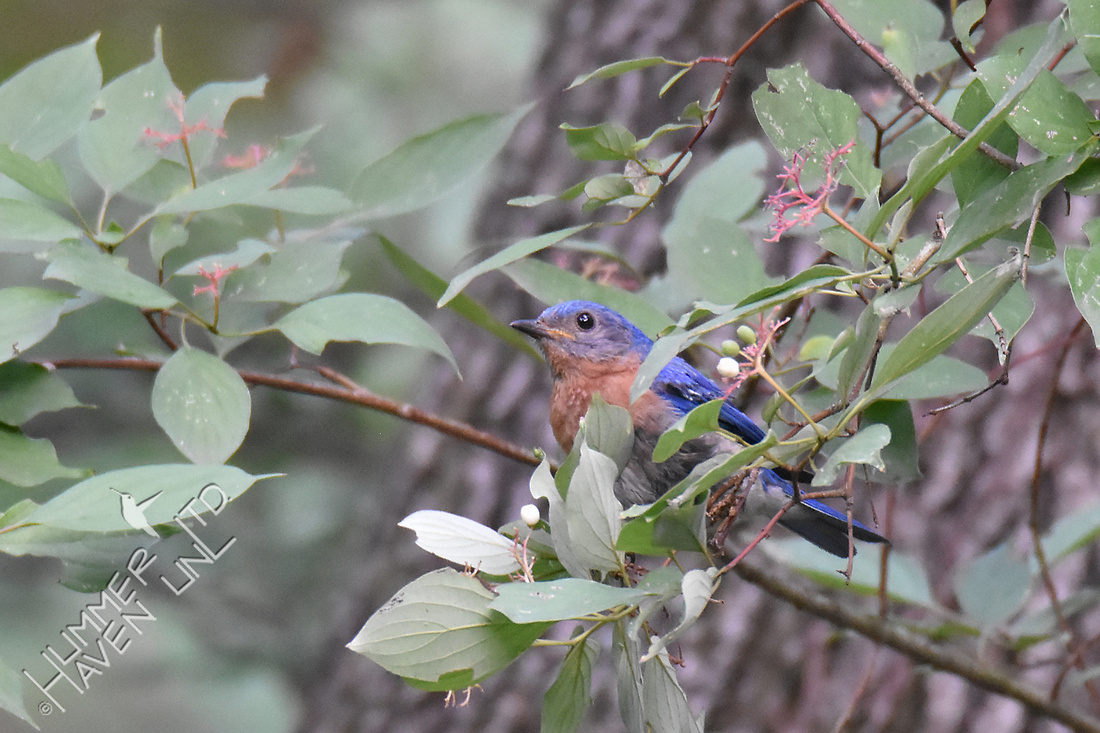 We returned late on Monday. A Monarch was still in the garden and Ruby-throats were chasing each other, all was well. I was eager to get out and see what was happening the next morning, before the rains started. The berries were nearly all gone, so I didn't expect to see bluebirds. I headed down to the garden.

The young Ruby-throats were the busiest, chasing each other and hitting the blooms, resting in between. They love the graceful, nodding flowerets of the Azure Sage (Salvia azurea), the sturdy spikes of the Eastern Blazingstar (Liatris scariosa), and the full clusters of the Marsh Milkweed (Asclepias incarnata). Over and over they would zoom in, sometimes four birds at a time were buzzing past me and darting around the flowers. 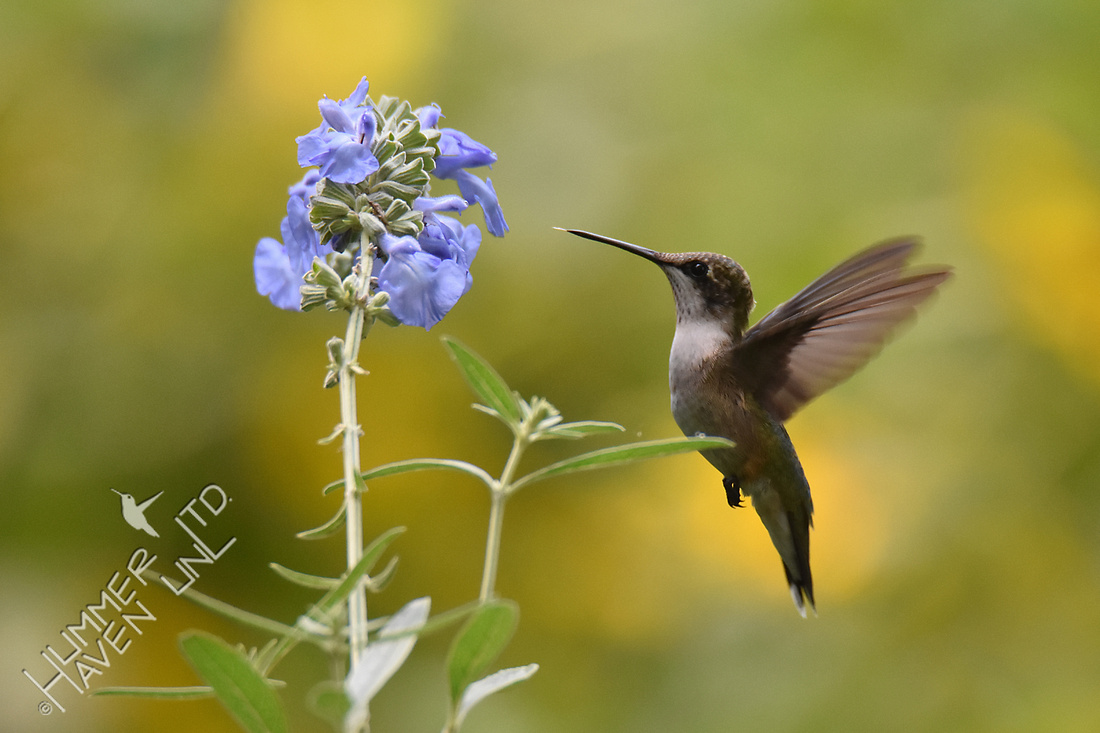 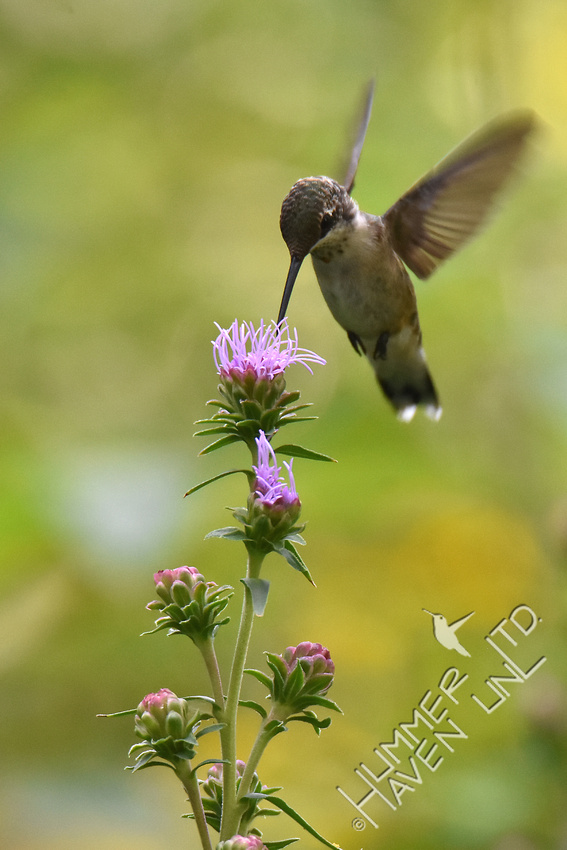 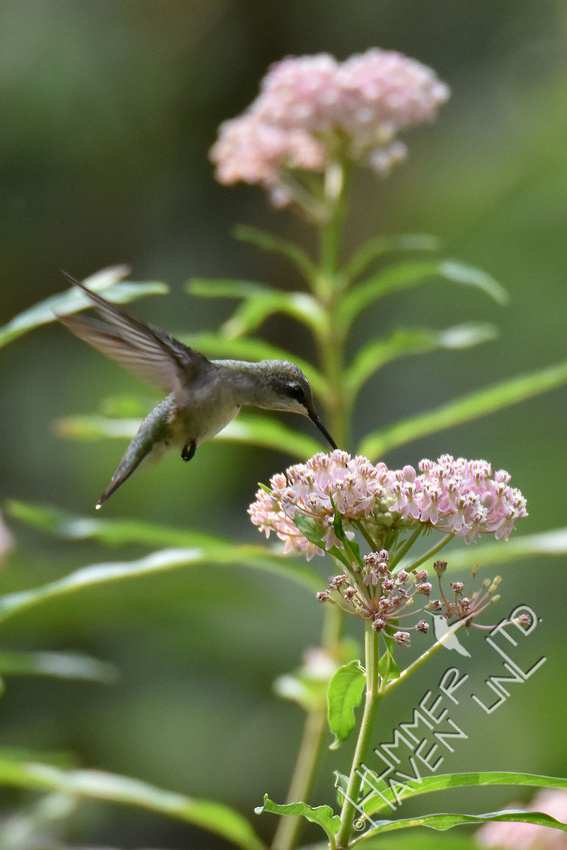 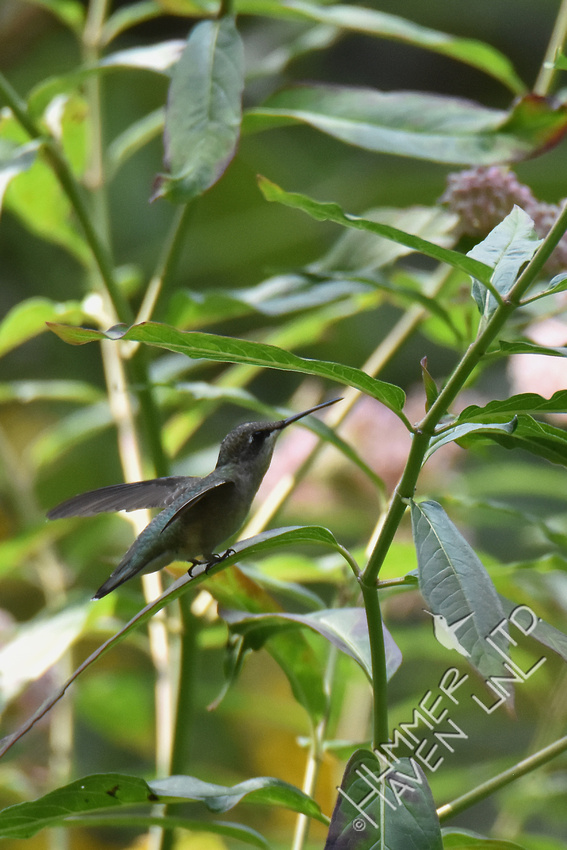 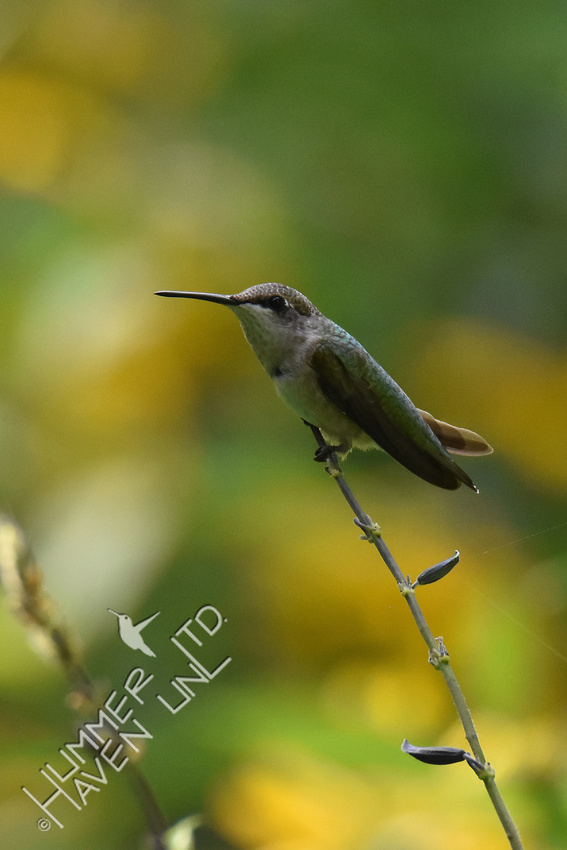 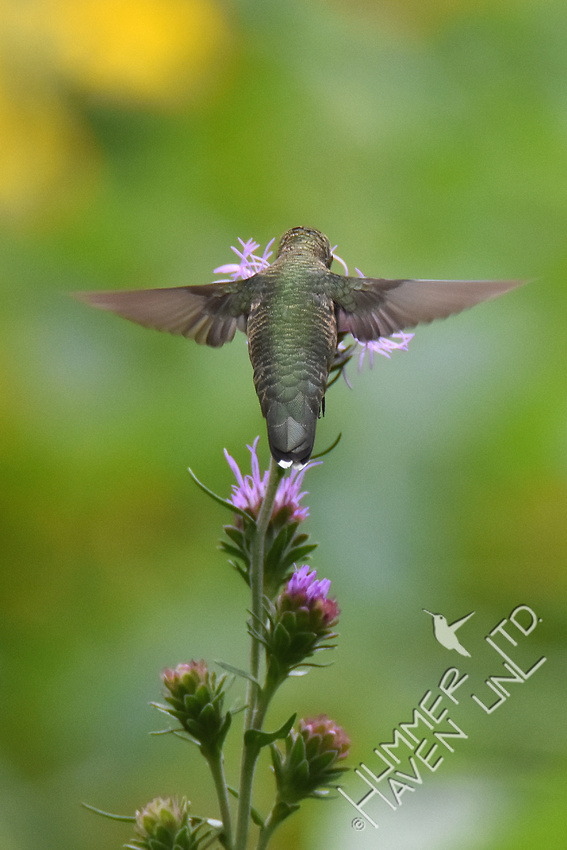 I've had more Monarch females laying eggs this summer than I've seen in several years. Most of them have been deep in the best milkweed patch of the garden, but one day an egg was laid on a plant at the edge, right in front of me. I was able to find the egg and get close-up images. 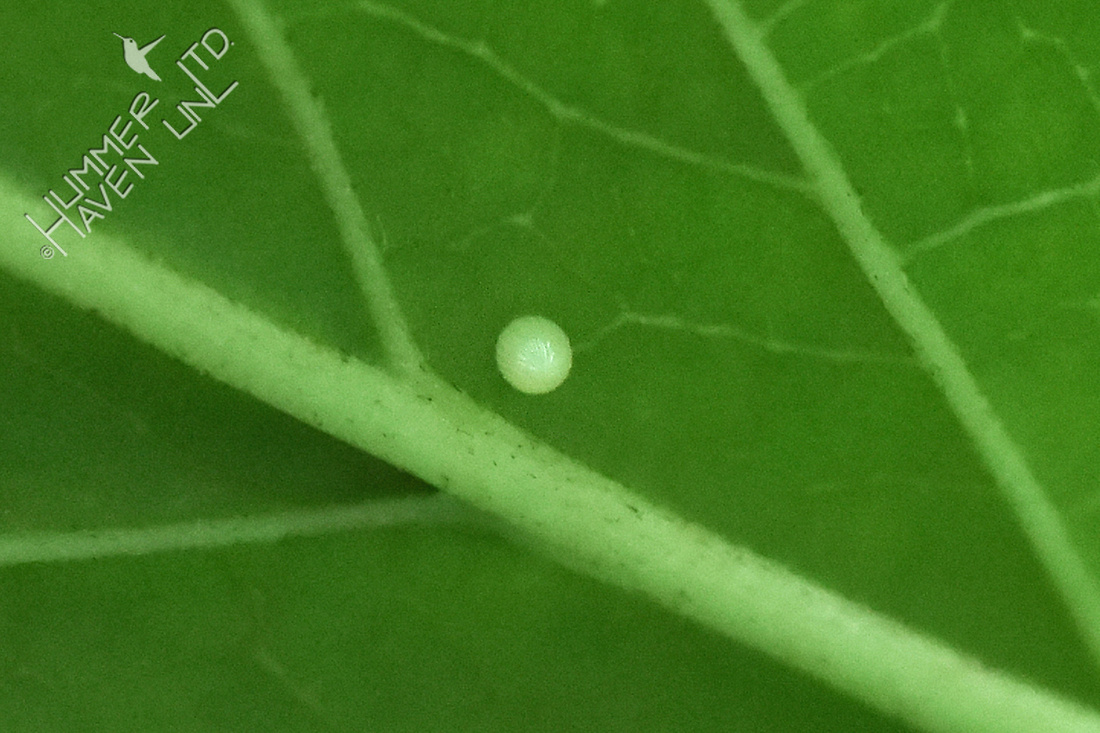 Four days later, the tiny caterpillar had shed its first skin and was now in its "2nd instar" stage. To read about the development of the Monarch from egg to larva, or caterpillar, to pupa and adult butterfly, look here:

Life Cycle of the Monarch 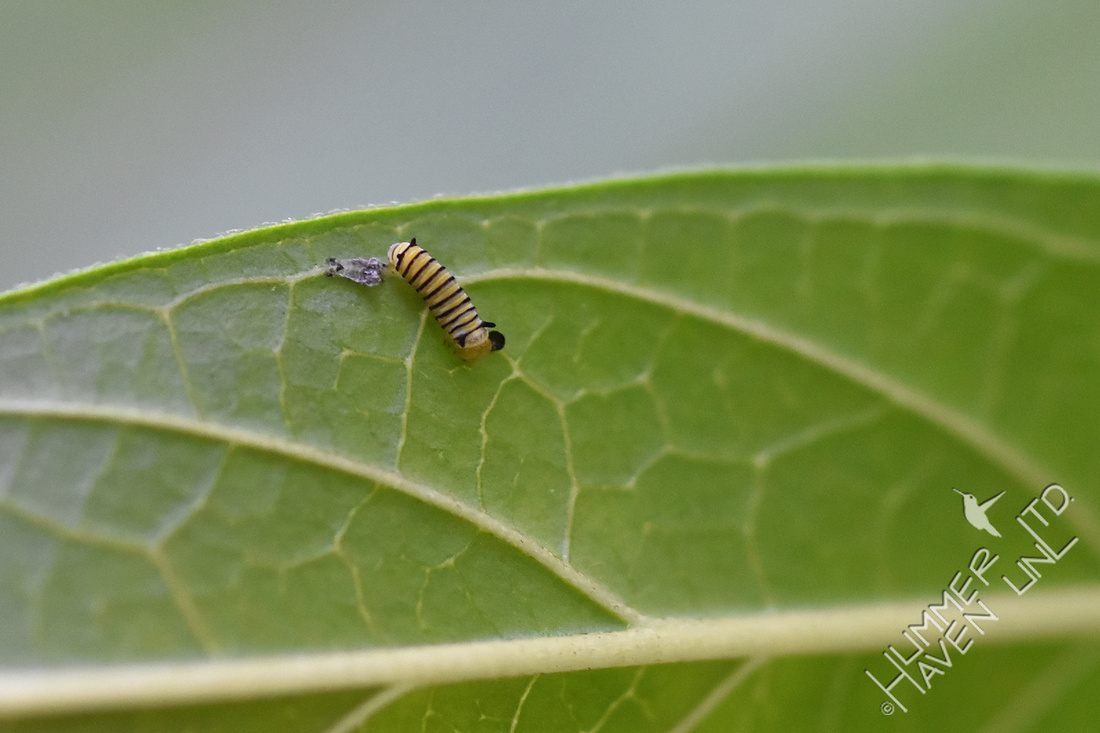 Another caterpillar on a nearby leaf was a bit larger and further along in development. 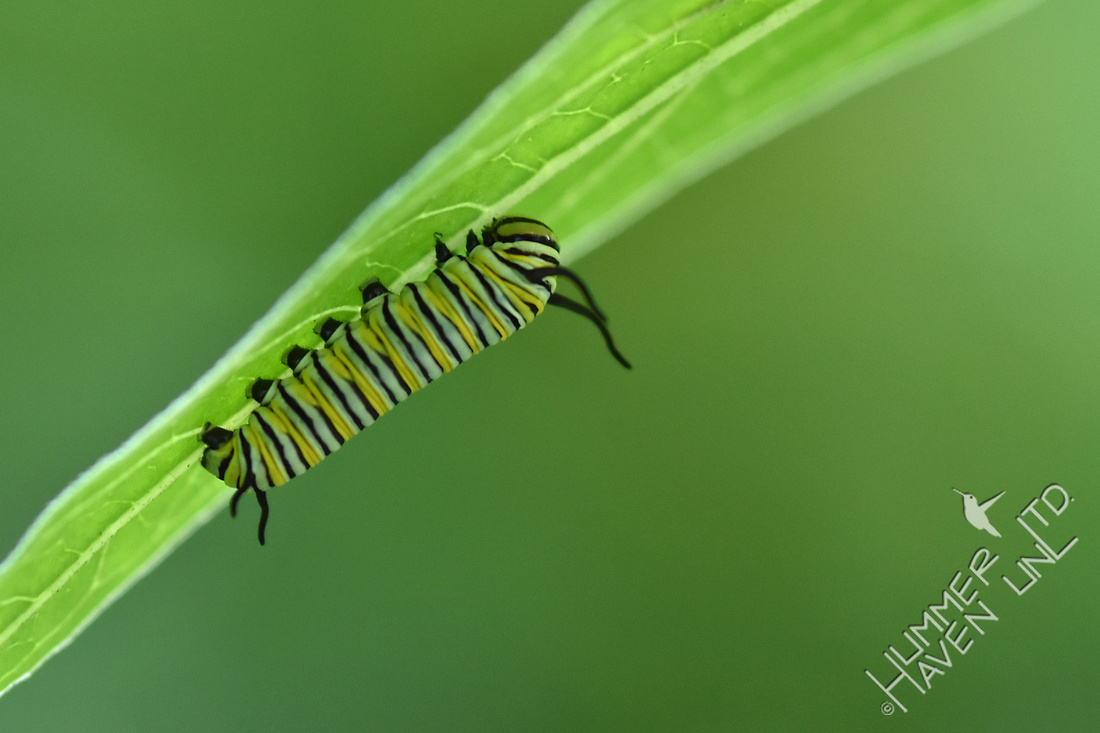 On Tuesday, 8/14/18 this Monarch happened to land on a milkweed stalk, the leaves of which were being slowly eaten by, what else, a caterpillar! 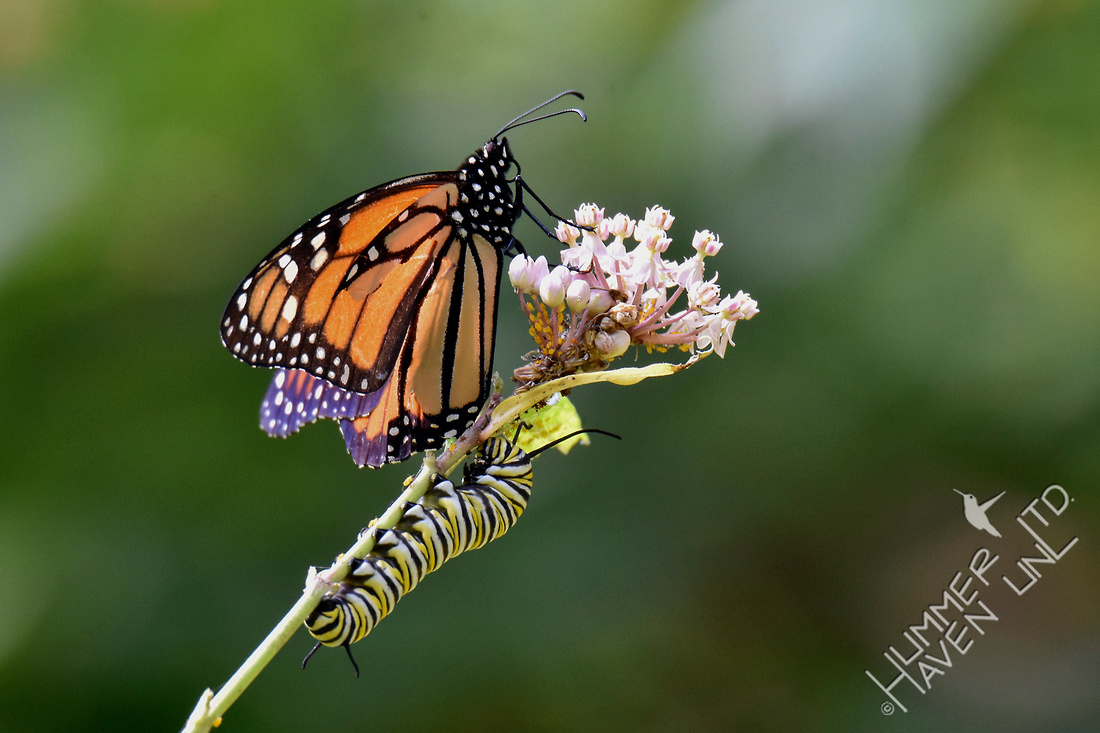 I followed this butterfly and it landed closer, perched on a coneflower. It looked fairly fresh, yet one wing had been torn or possibly eaten by a bird grabbing for it. Again, this is all part of life in this natural, sometimes imperfect world. 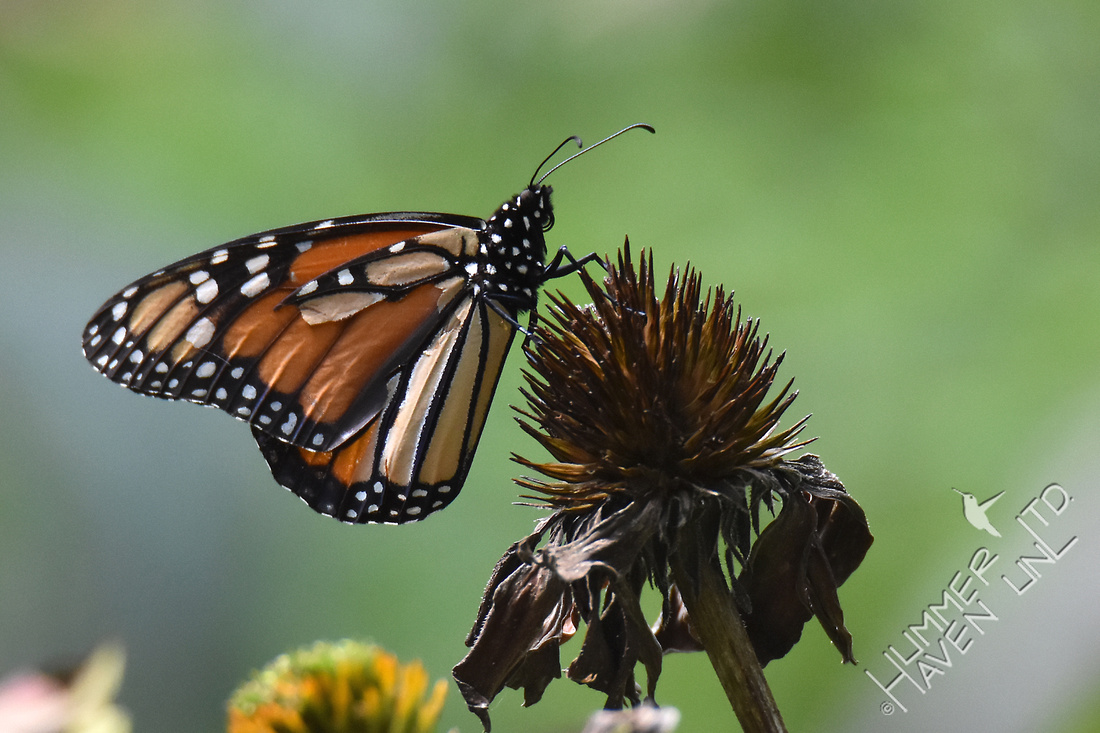 There was a female laying eggs again yesterday, even on tattered, insect-ridden milkweed! And, it seemed everywhere I looked, I found caterpillars. 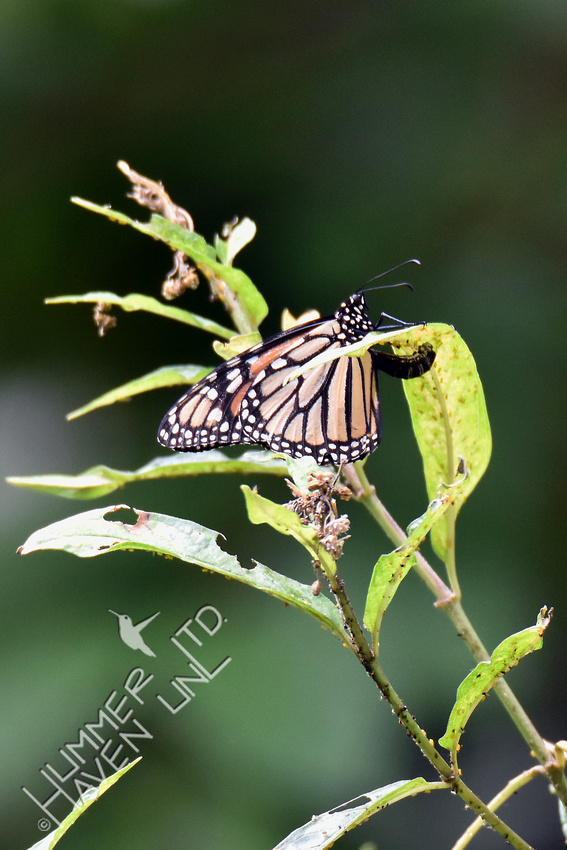 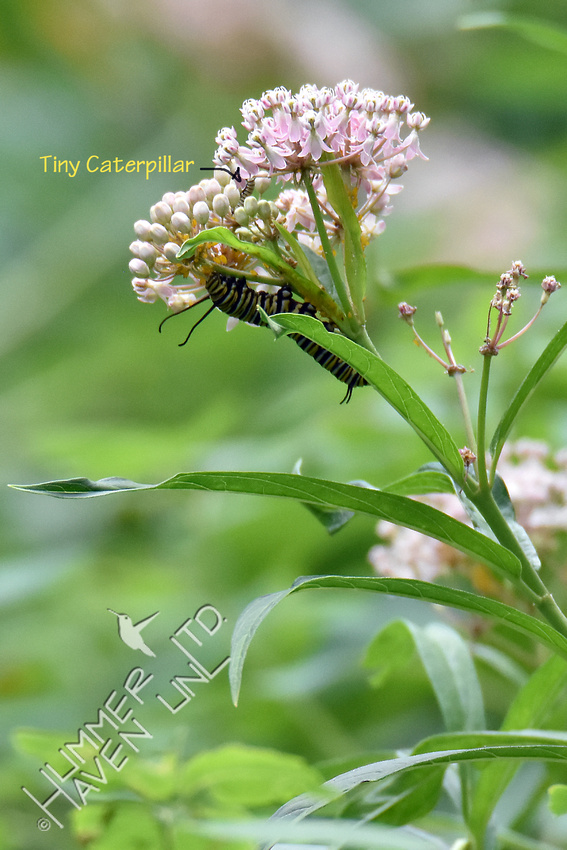 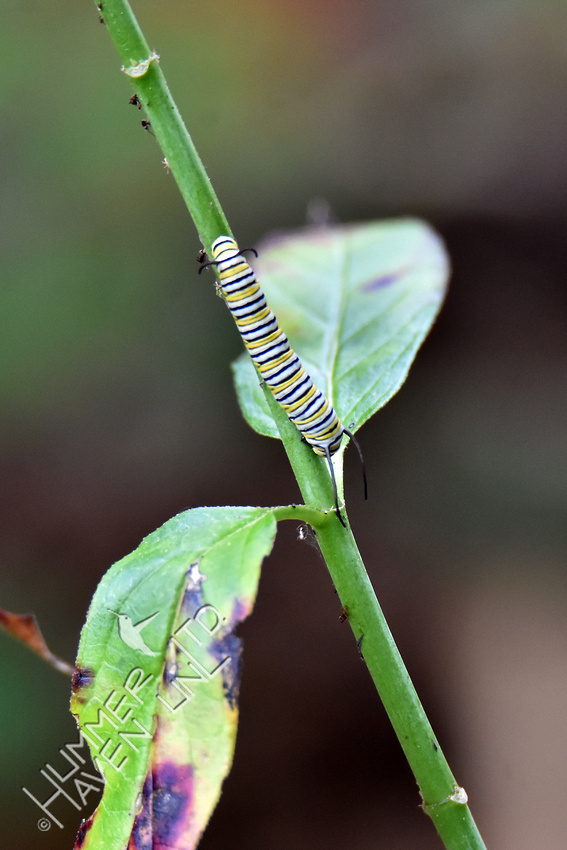 For the first time, I watched one crawling on the ground towards the hydrangeas nearby, where it will find a branch and pupate for its final stage of metamorphosis. 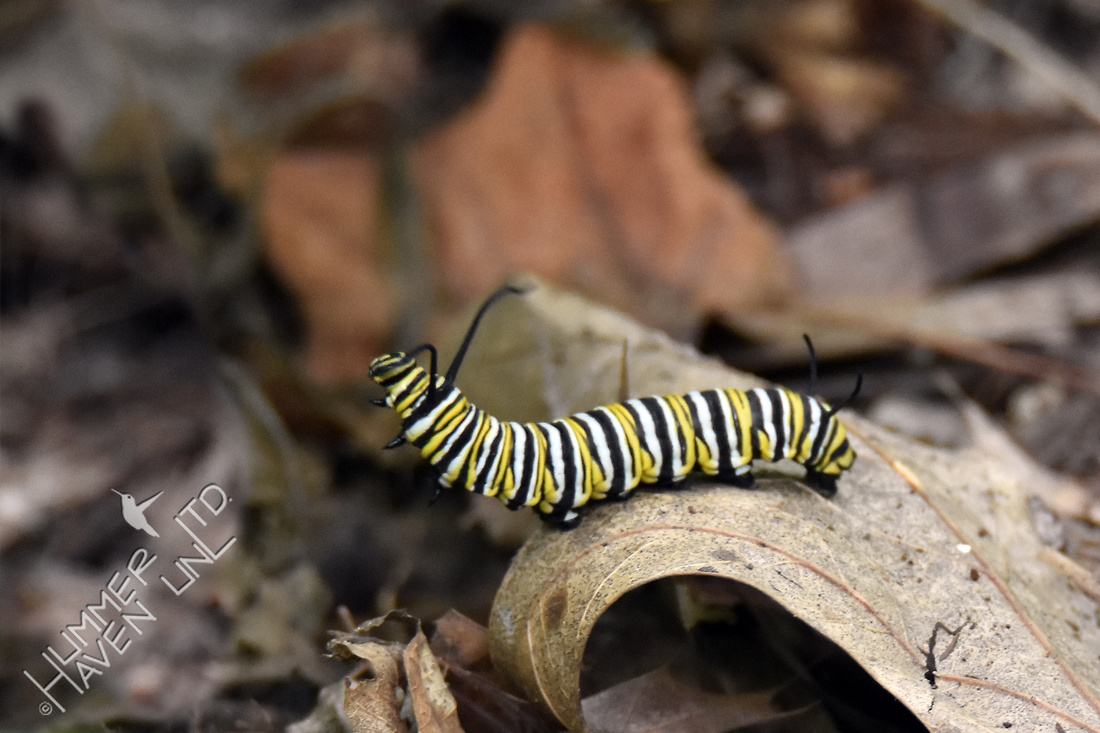 I took a break and came in for lunch. As it turned out, I was far from finished for the day! The robins and the bluebirds were back to finish off the berries. Two of the young bluebirds decided to bathe. They are a bit easier to see on the Bubbler rock. Back to eating berries, their camouflage made them harder to find. 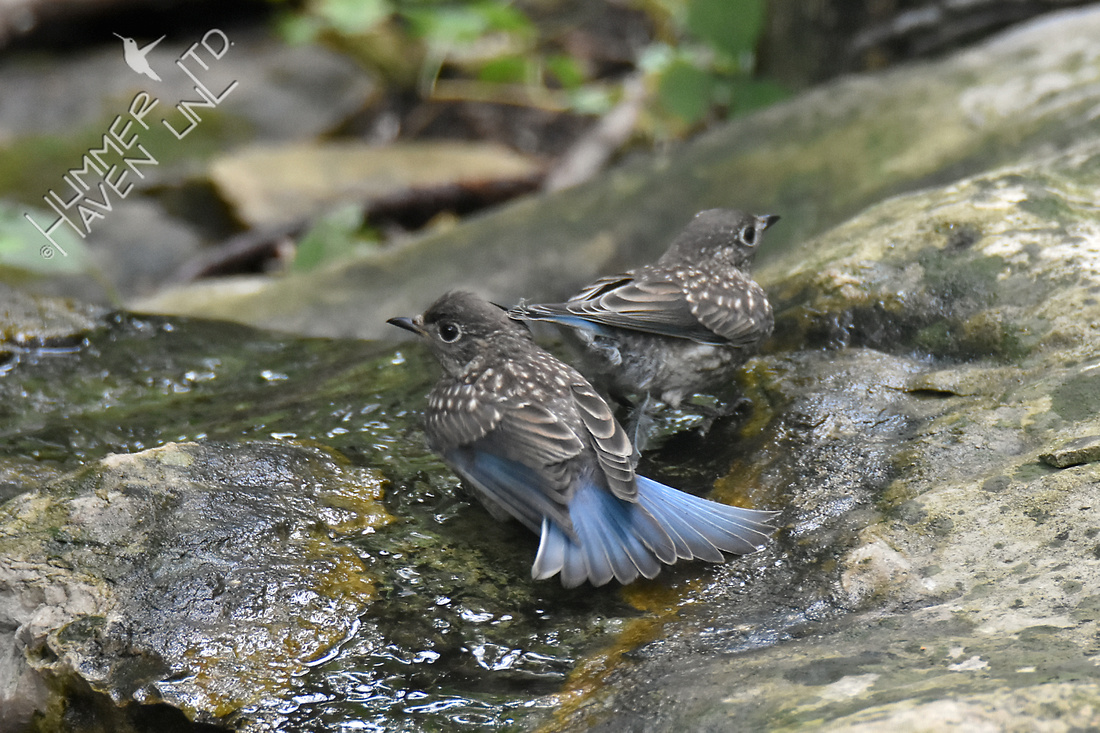 Eastern Bluebird juveniles at the Bubbler 8-14-18 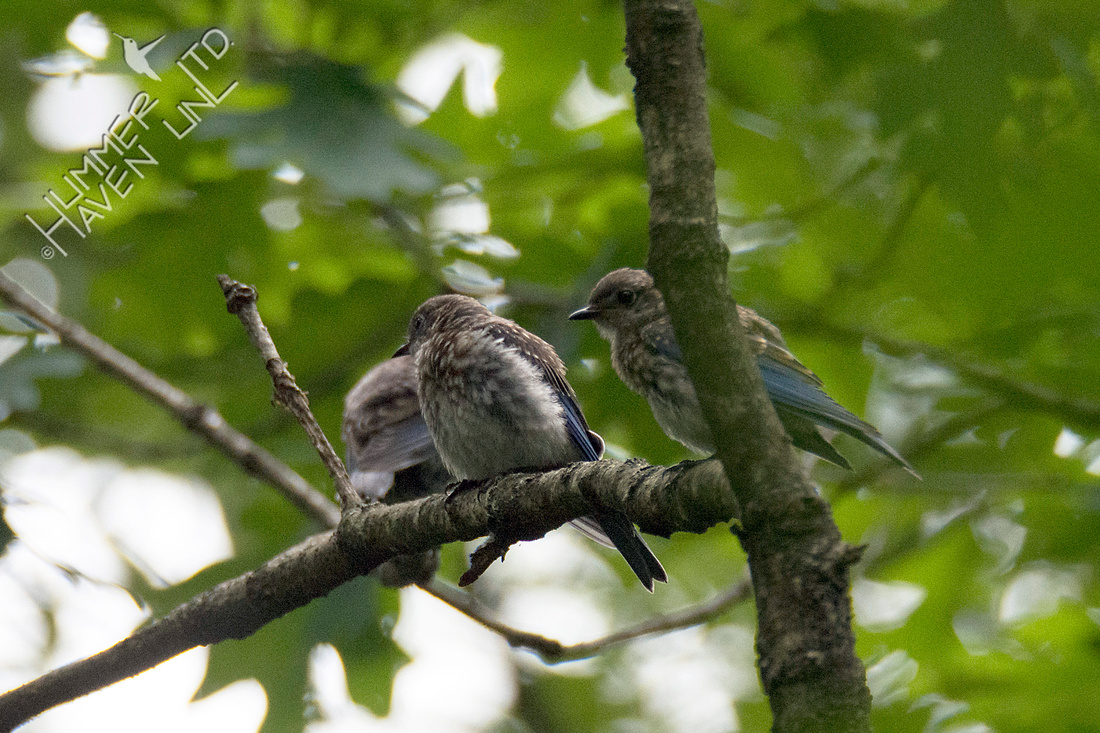 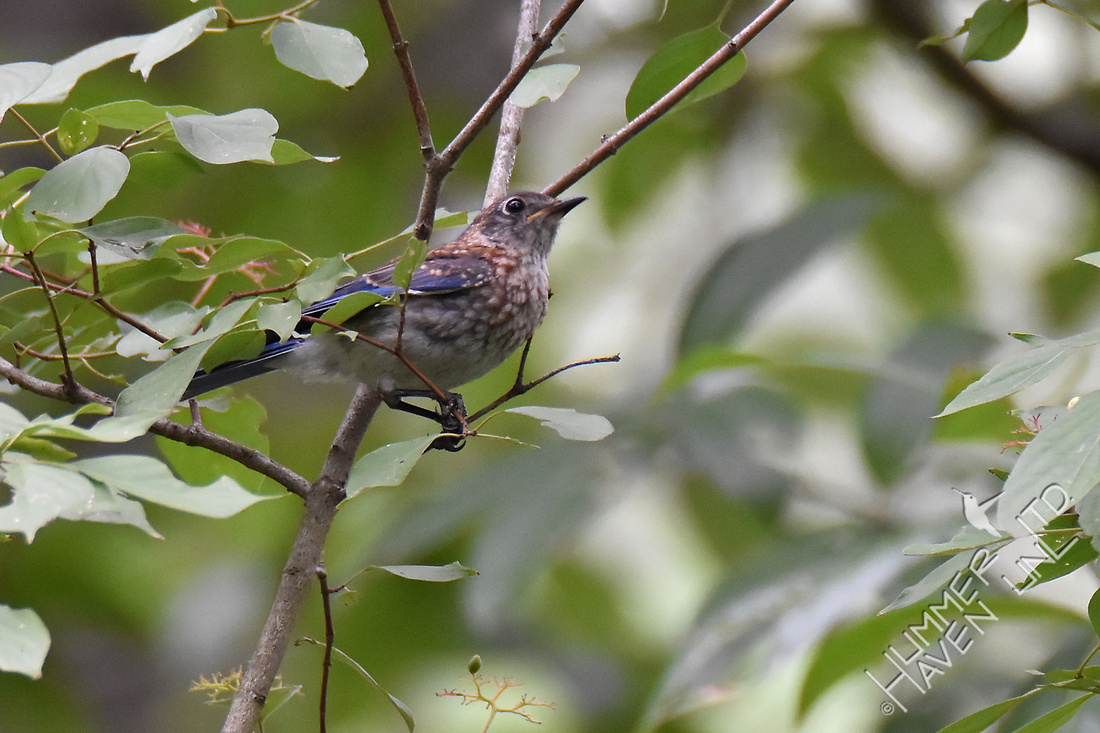 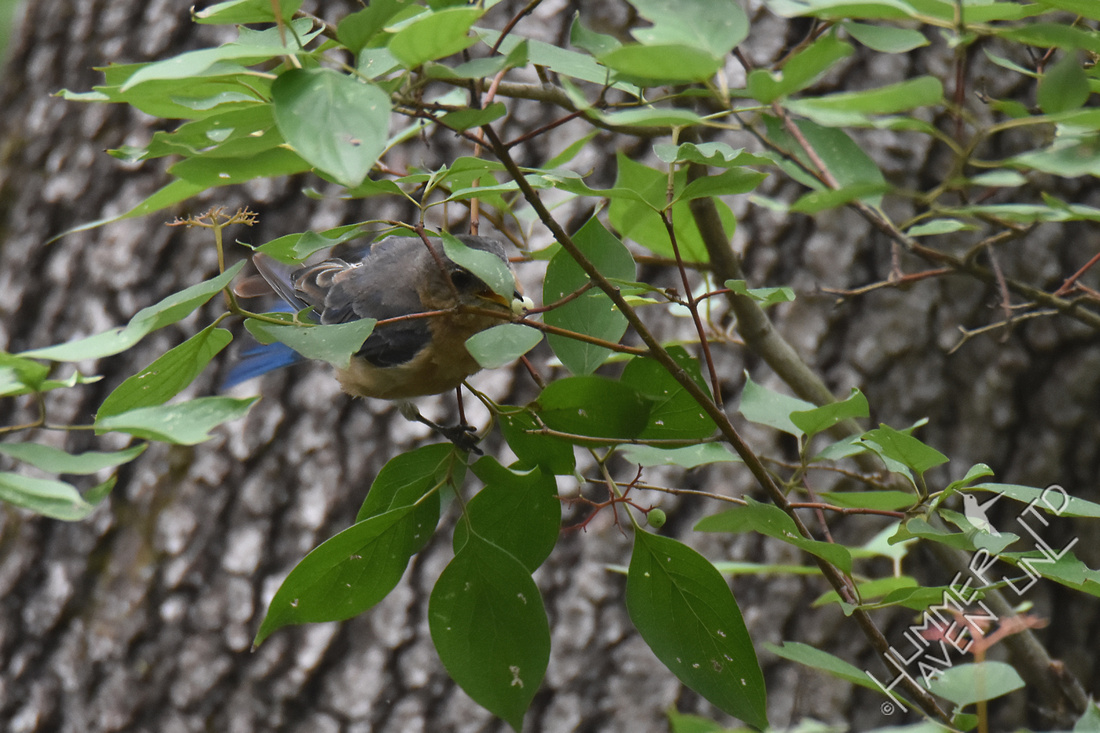 I returned to the garden for a while, the light was soft with the dewy clouds moving in. This Ruby-throat enjoyed the Ironweed (Vernonia arkansana). 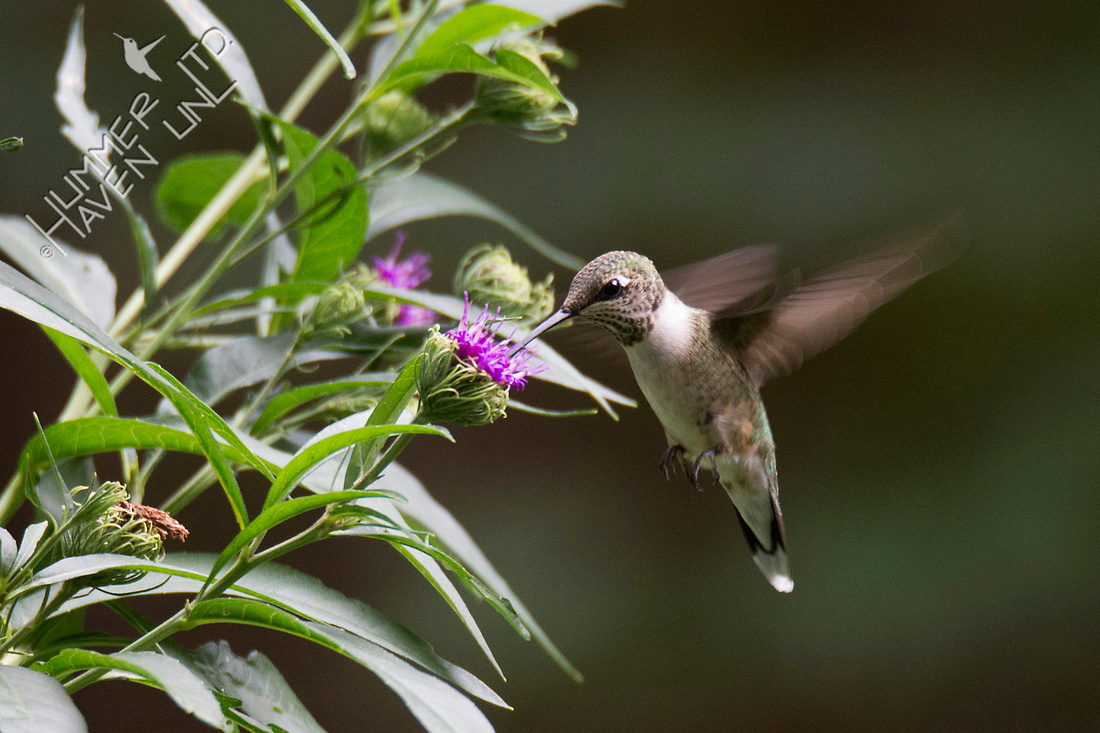 Another Monarch nectared at the Eastern Blazingstar (Liatris scariosa). It had been a very good day indeed with all of this life dancing in the garden! 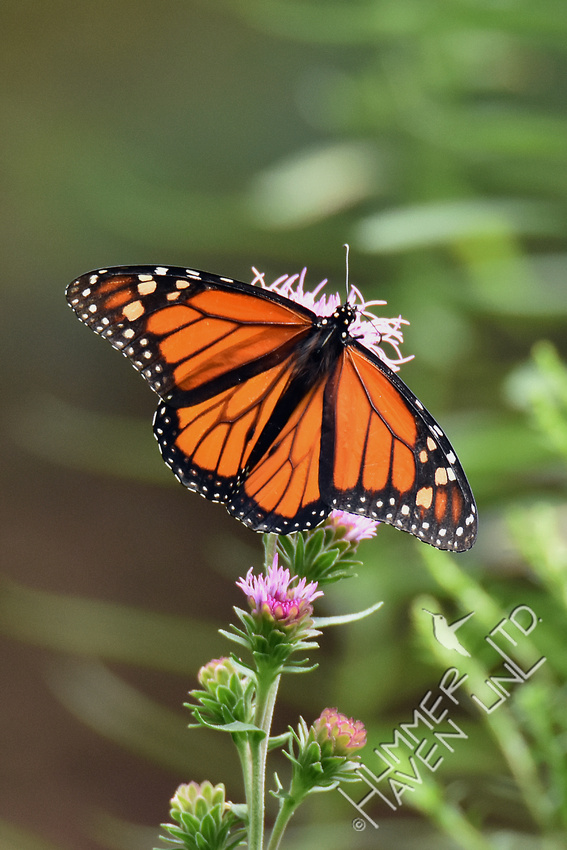 Wow, I took almost 1100 photos on Tuesday. I go through them all and post a few of my favorites. On a daily basis, I add photos to the different galleries to keep up. One can always check those in between postings. August has been quite exciting!

For butterflies:  Butterflies since 8/4/18