The winds have not been all that favorable for the birds in this peak week of migration.  The travelers that I've seen here seemed intent on feeding and barely singing.  It takes so much energy to make their journeys.

It had rained 7 out of 9 days and a few Chipping Sparrows showed up as the showers subsided on Thursday afternoon, 5/4/17.  This one found a tiny morsel on a violet. 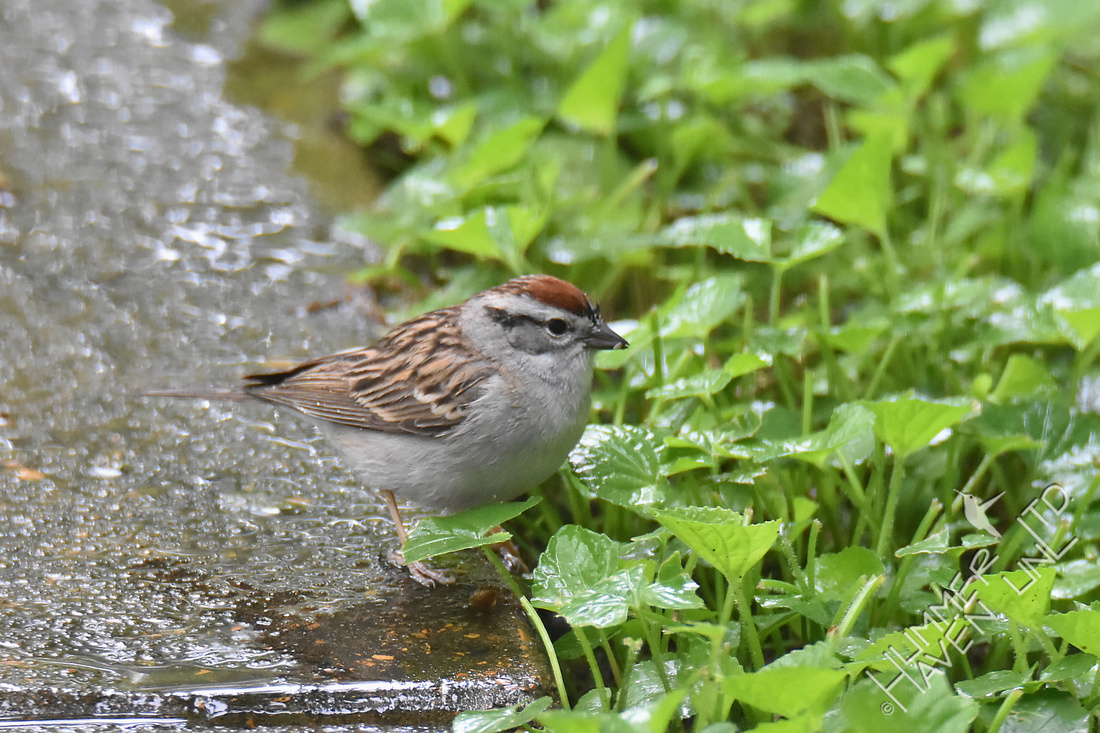 The next day revealed some warblers.  A Golden-winged Warbler looked in at the Bubbler before a squirrel came in too close for comfort. 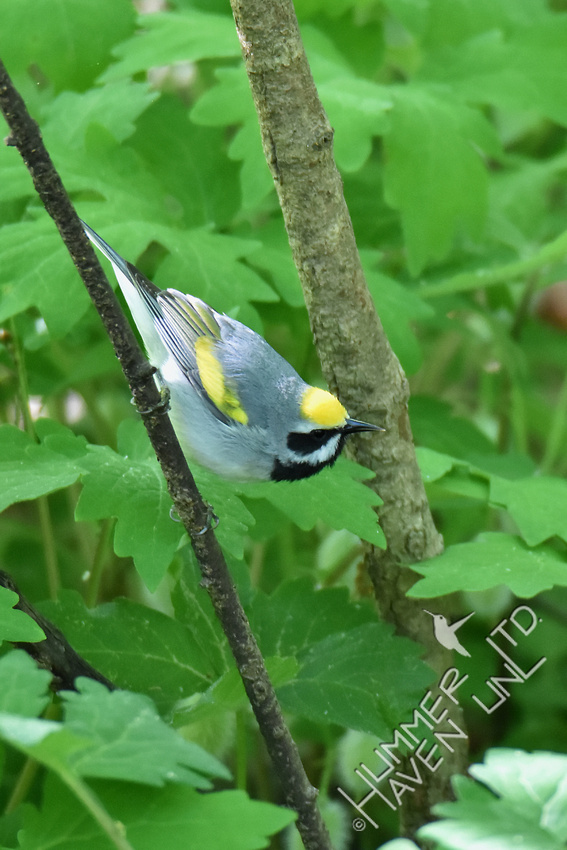 It was followed soon after by a Blue-winged Warbler. 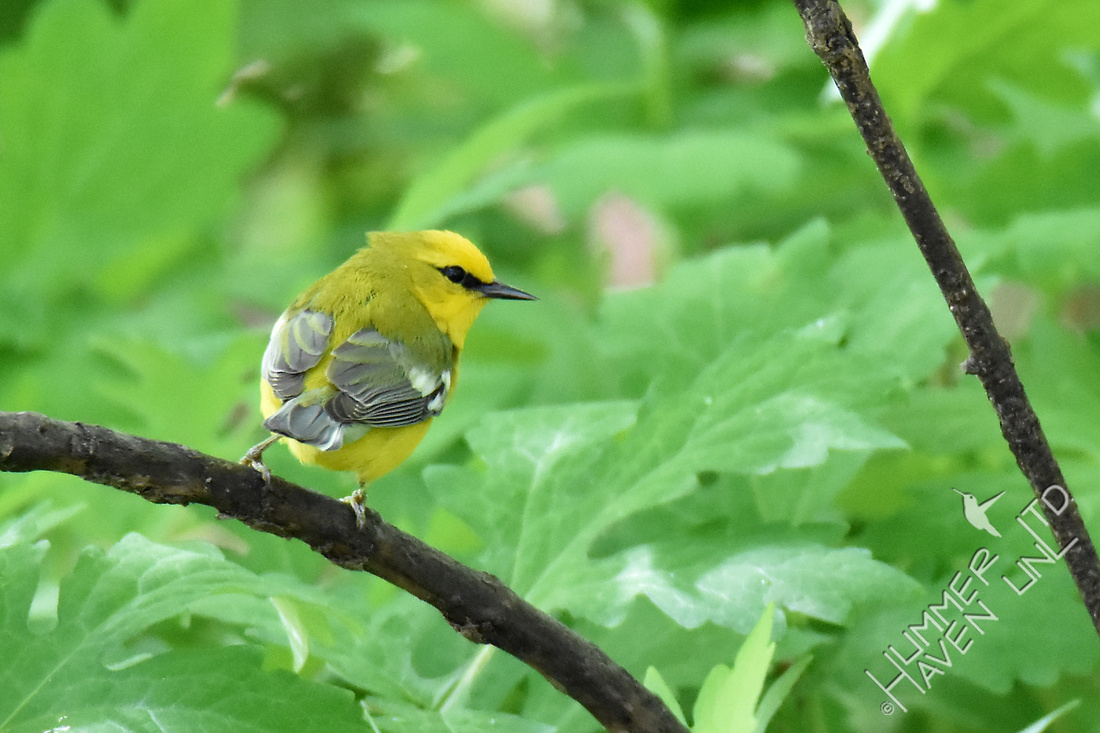 Nearby, mowers and blowers were deafening, but that did not stop this Baltimore Oriole from coming down from the canopy to bathe! 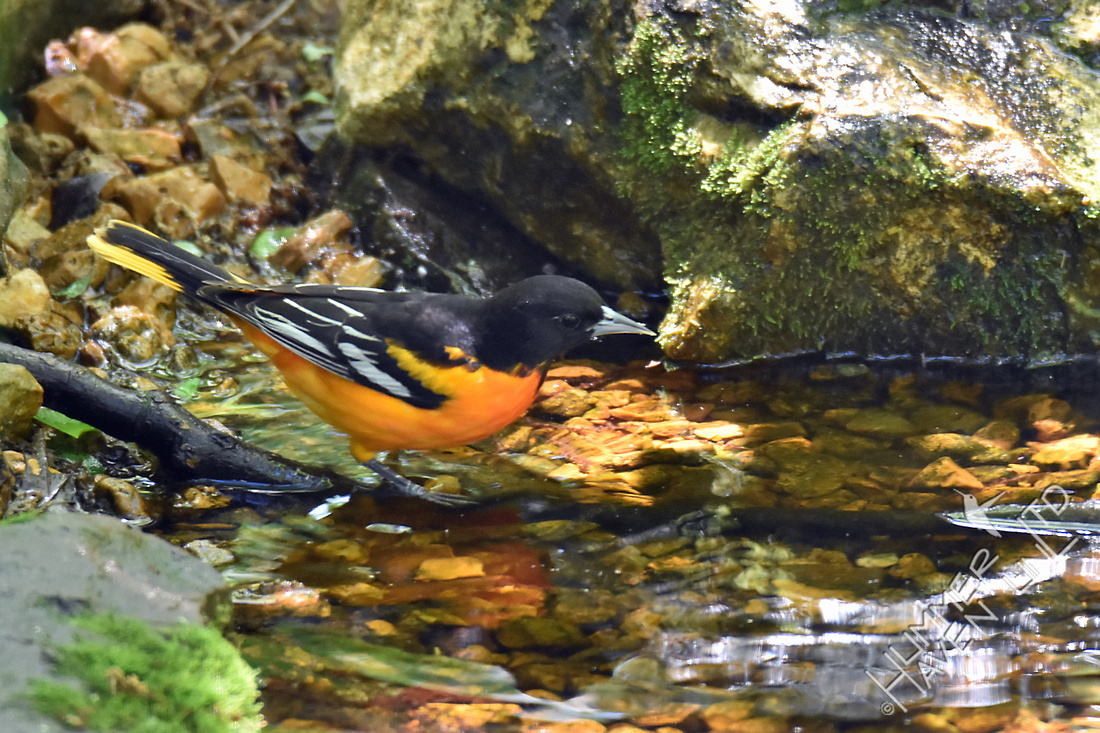 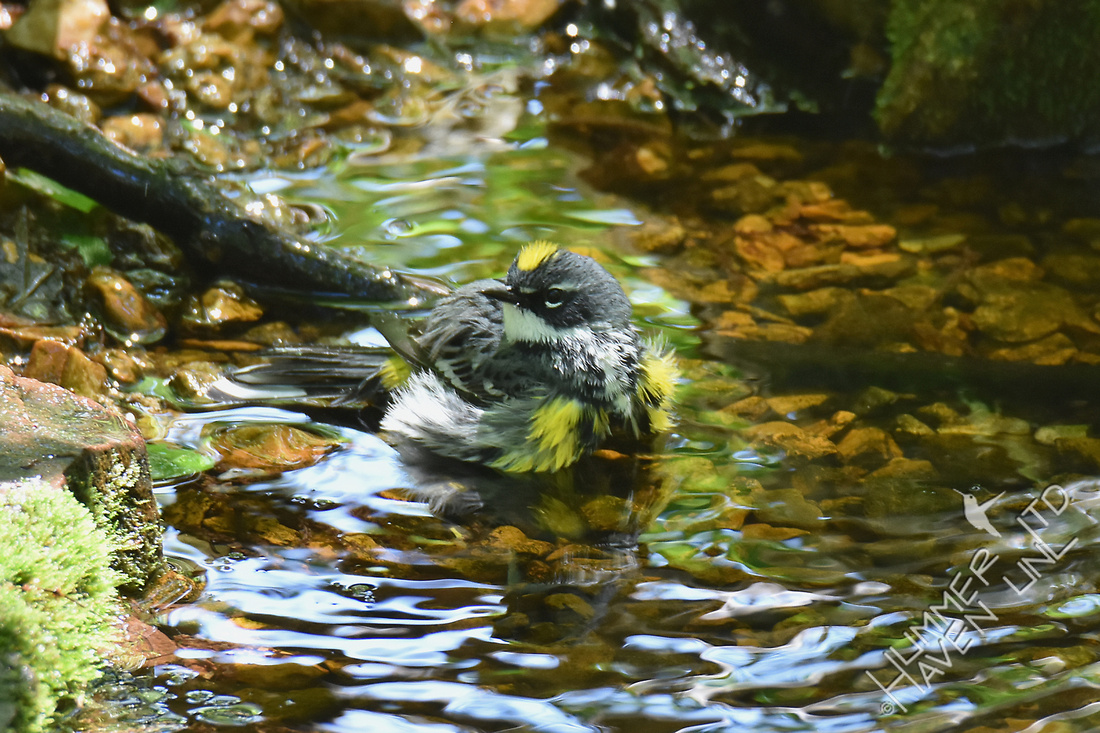 A female Indigo Bunting looked in from the Smooth Hydrangeas (Hydrangea arborescens) behind the Bubbler. 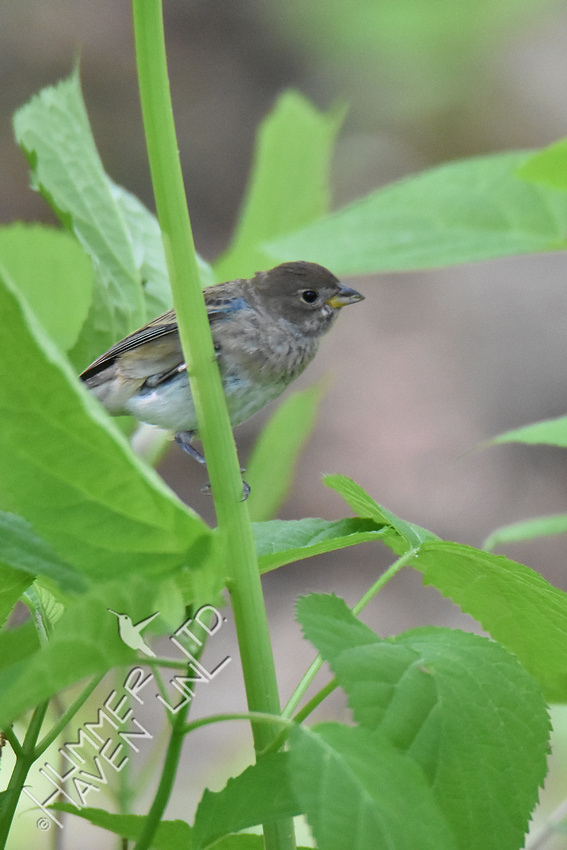 White-throated Sparrows were also here for a while longer before heading north to Canada. 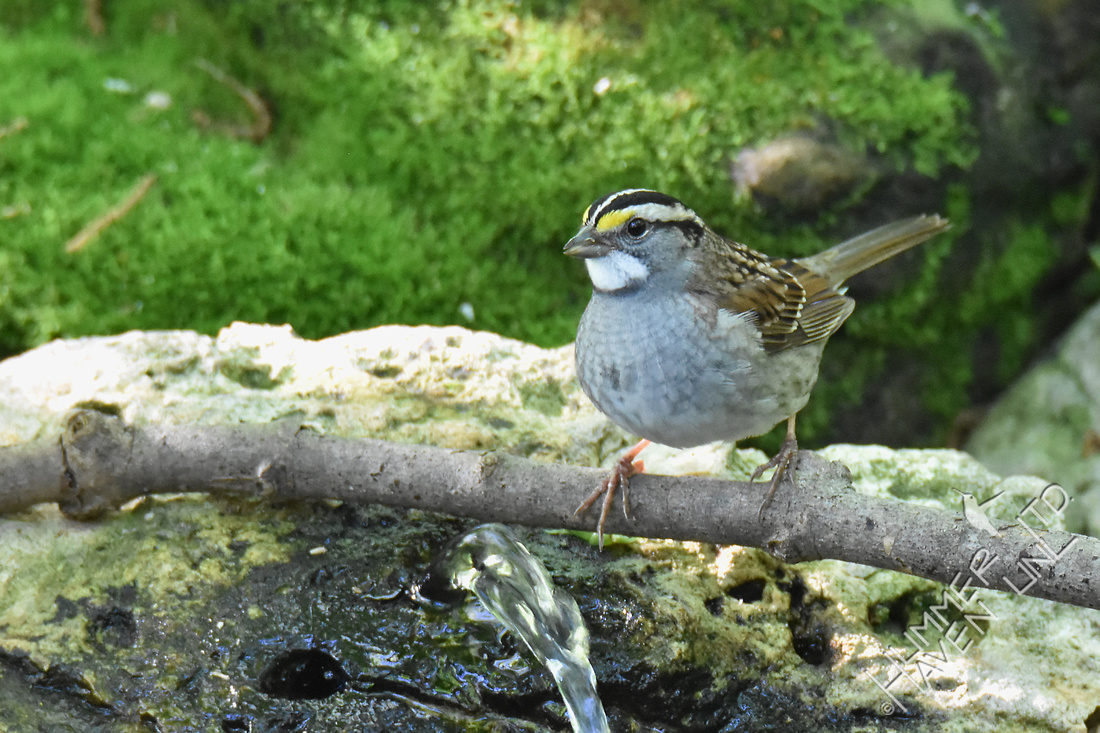 Rose-breasted Grosbeaks came in a flock of 3 males and 3 females.  These large finches were seen squabbling at the Bubbler and the feeders for several days. 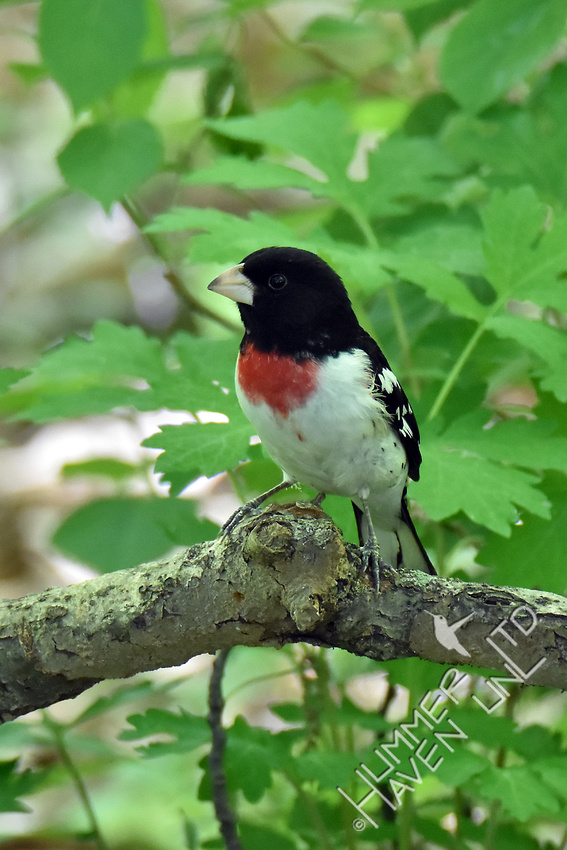 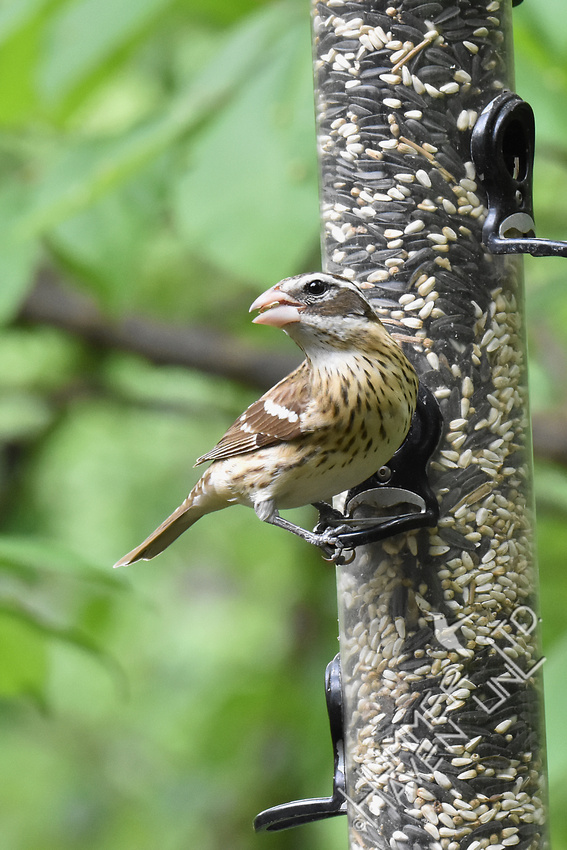 On Sunday, 5/7/17 a Gray Catbird popped in to make its presence known.  I had not heard it that day or since then.

On Monday, 5/8/17 a few more birds showed up.  Two were warblers, this American Redstart and a Black-throated Green. 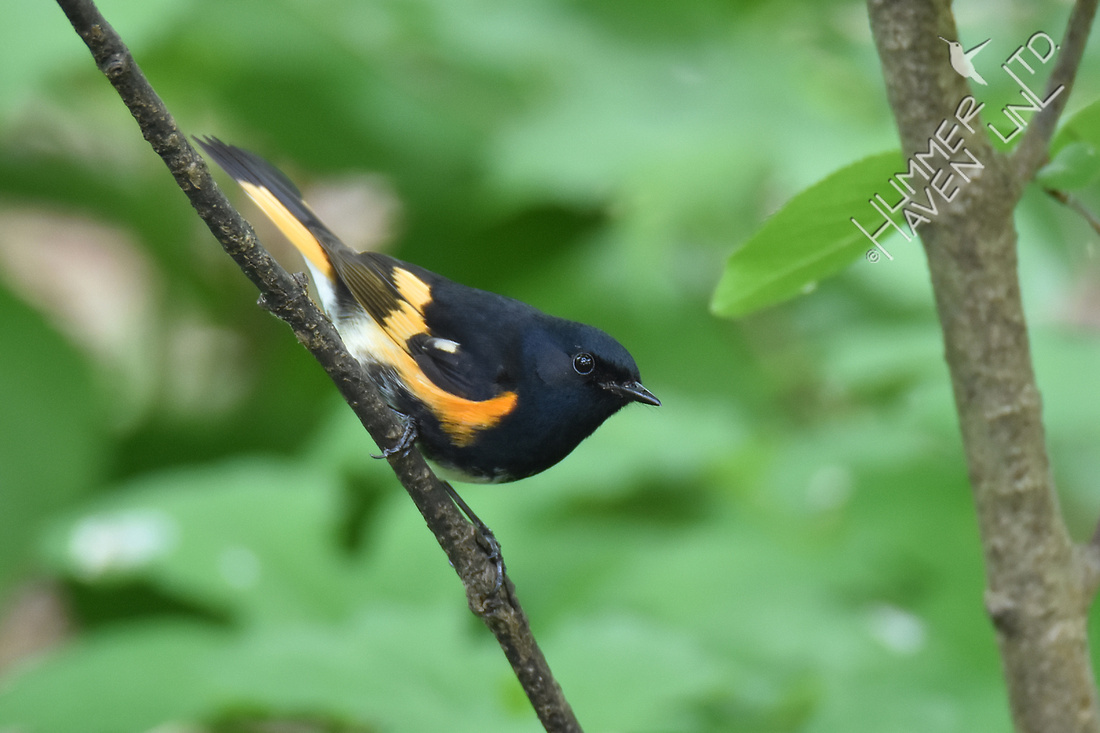 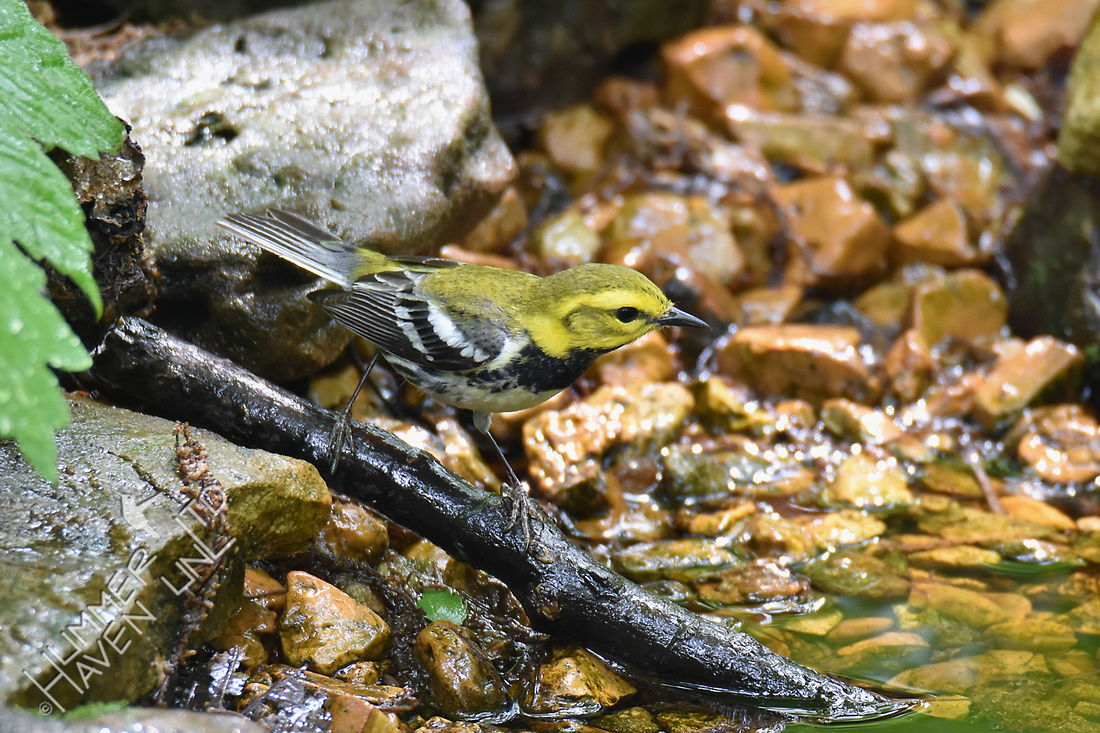 I'm always glad to see these 'old friends' but this bird was one I had not seen or photographed here before.  It was a female Scarlet Tanager. 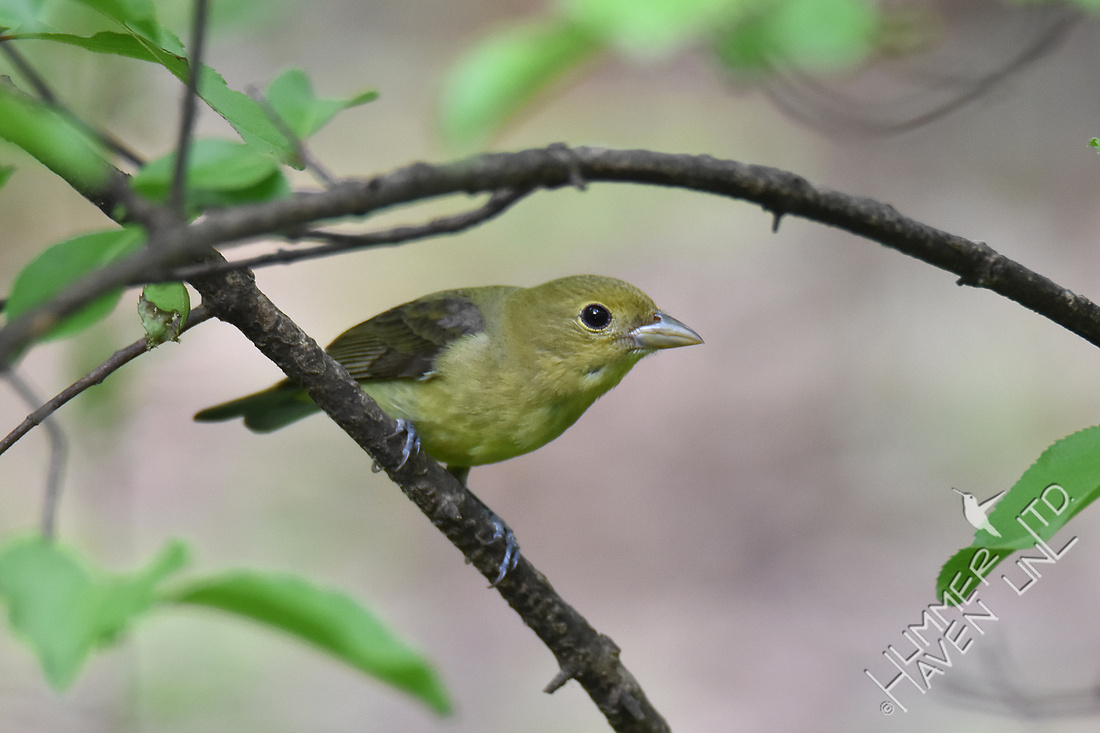 It has seemed to me all week that the same small flock of warblers kept moving around the neighborhood and I would see a slightly different mix each day.  Nashville, Tennessee and female Black and White Warblers have bathed. 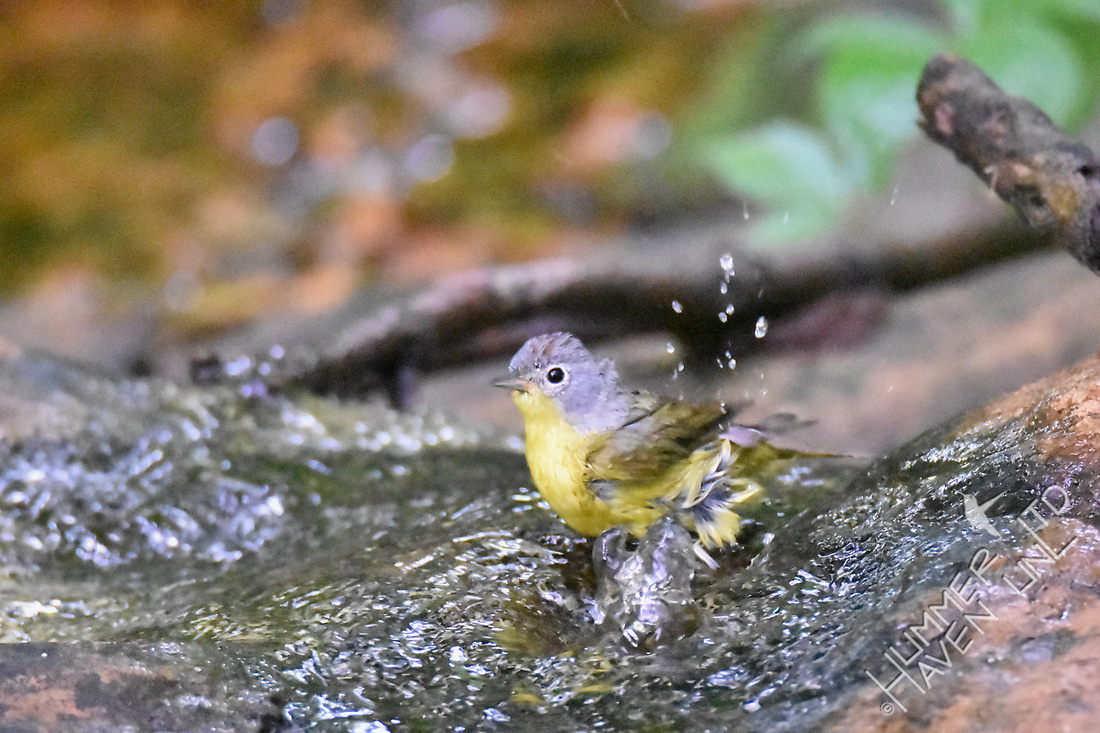 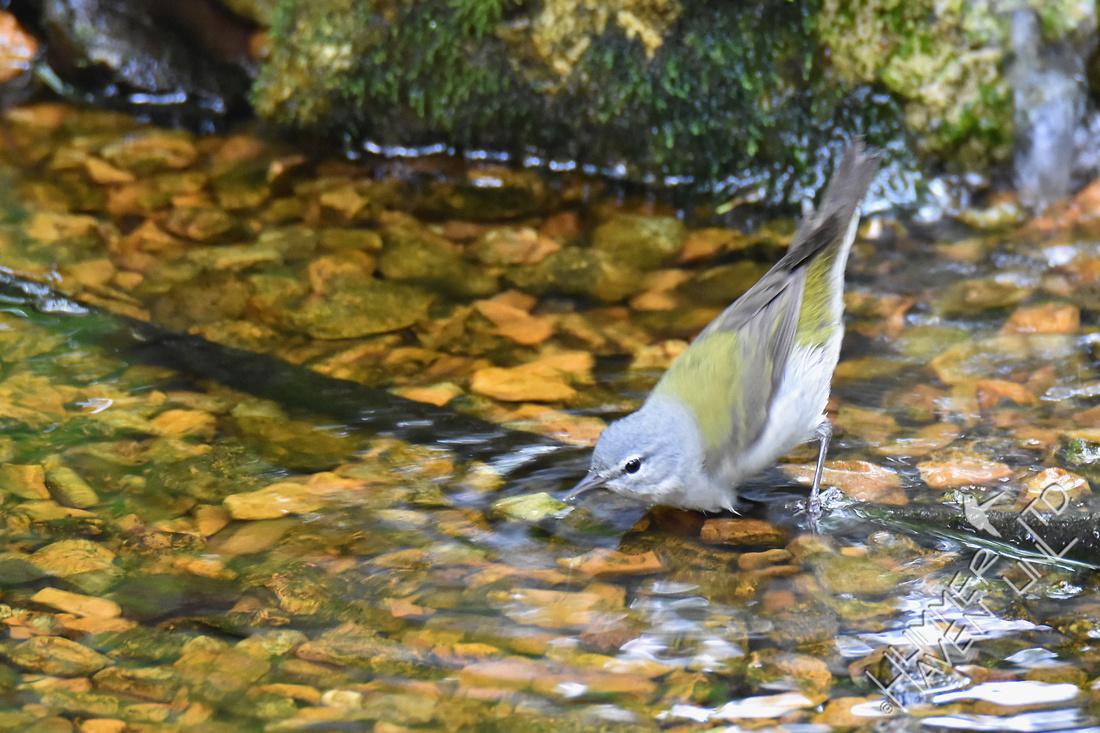 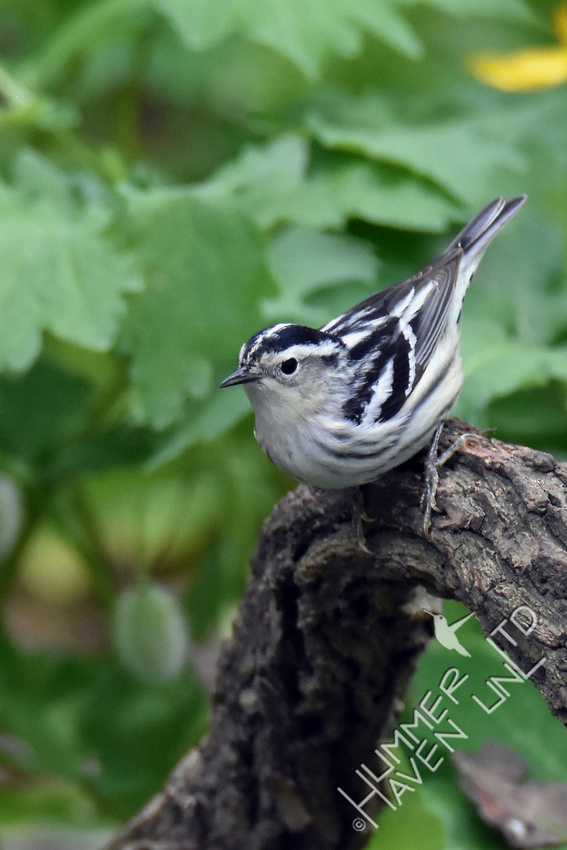 A Gray-cheeked Thrush found a tasty cricket for its breakfast in the cover of the Wood Poppies (Stylophorum diphyllum) and Wild Ginger (Asarum canadense) on Tuesday, 5/9/17.  The insect was down the hatch in two quick gulps! 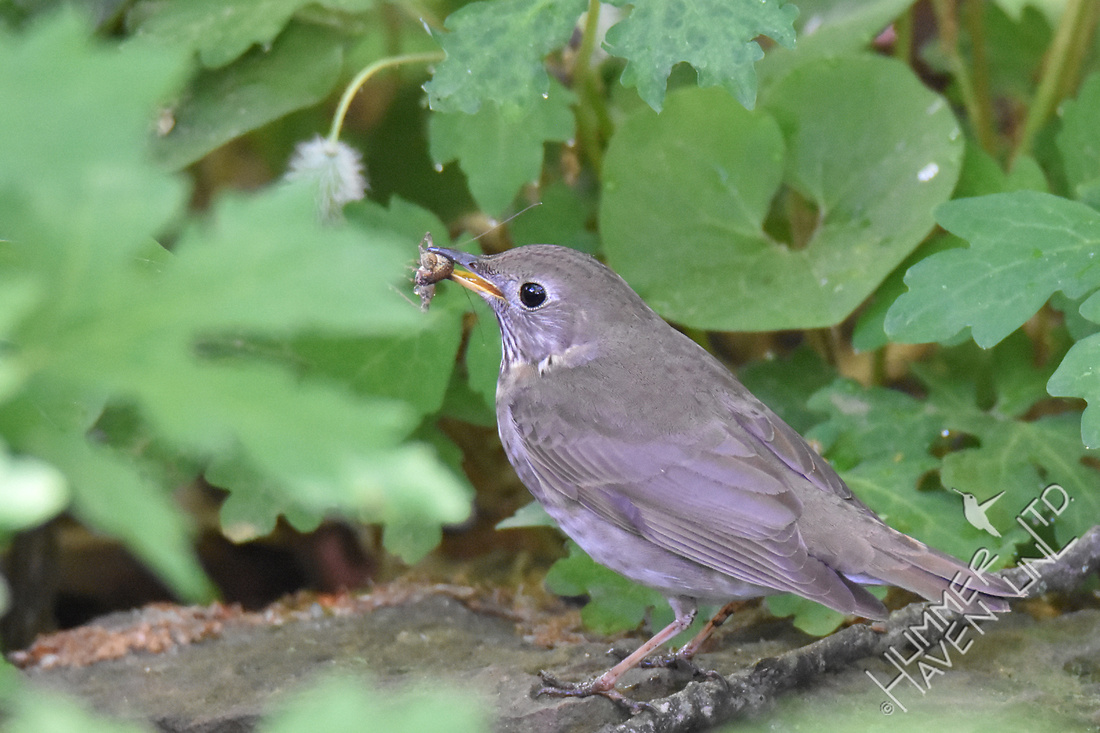 Another bird that I never heard call but stopped to check in was this Yellow-bellied Flycatcher on Wednesday, 5/10/17. 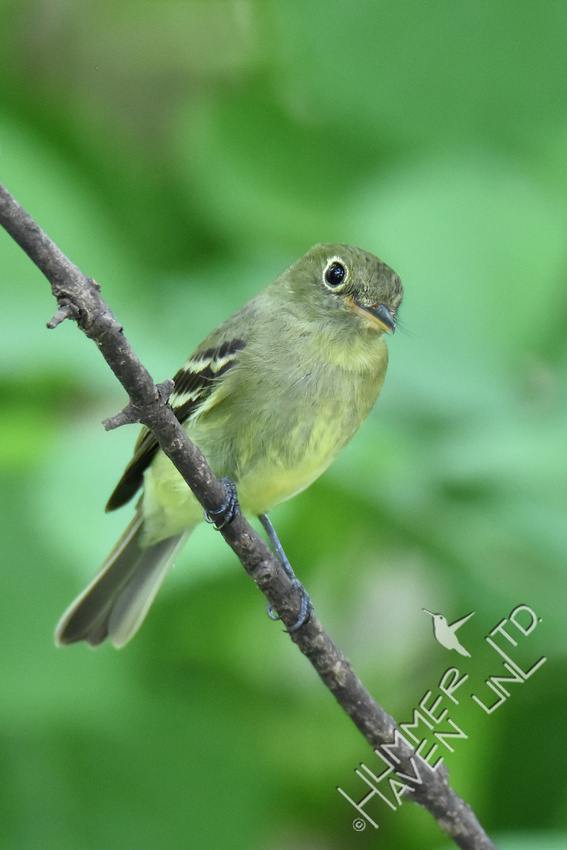 Today has been pretty quiet with showers on and off and northwest winds again.  Maybe tomorrow will be a brighter day and bring some birds!

To see all the photos from the past week, begin here: