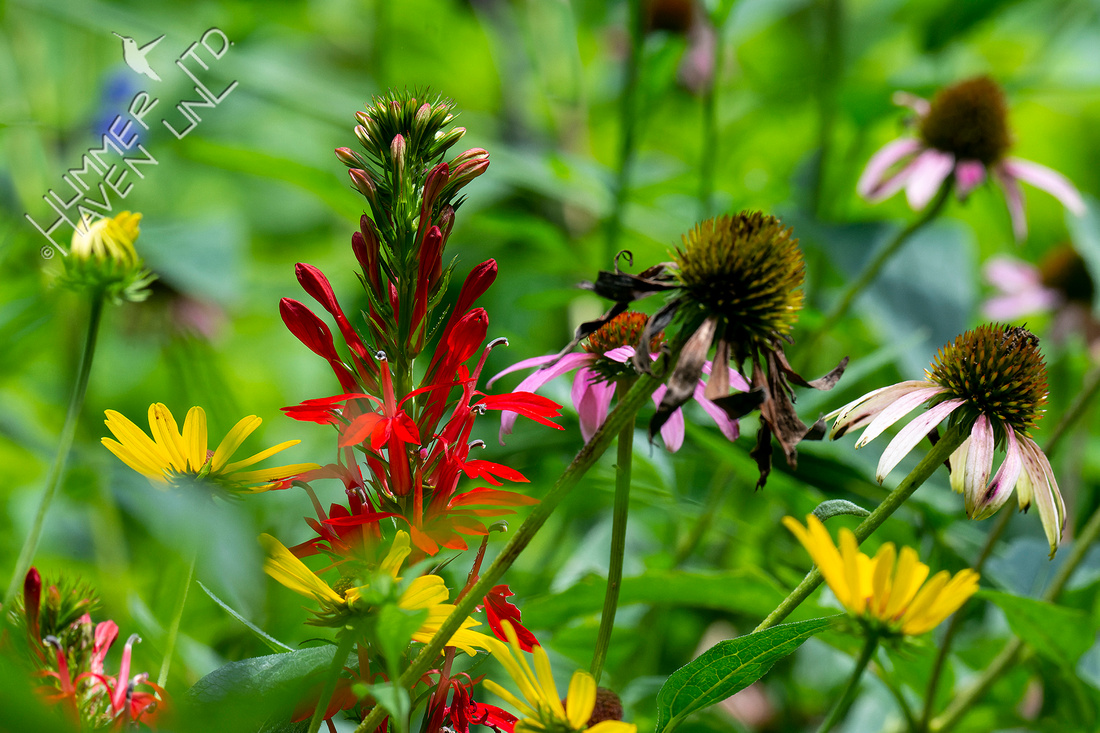 The Songbird and Butterfly Garden is a riot of color in August! 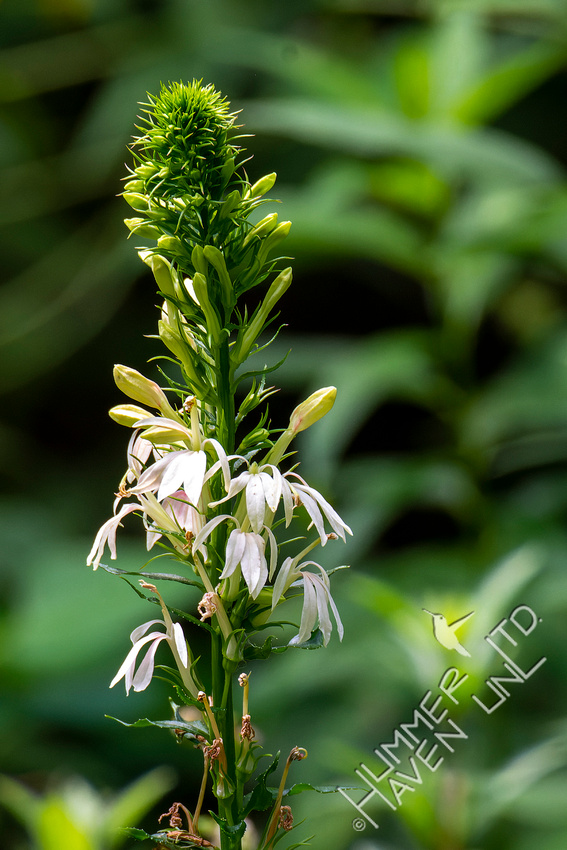 This summer, there is a White Cardinal Flower (Lobelia cardinalis 'alba'). This is not a plant that I purchased, but a naturally occurring strain. It has a touch of pink in it. 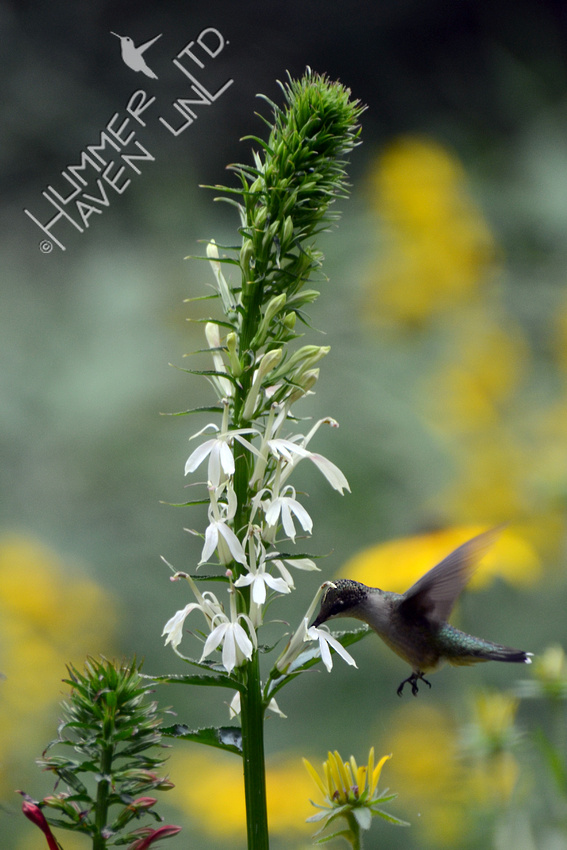 In August, 2011, this hummingbird sipped nectar from the flowers of the first one that grew in the garden.The bird may have pollinated the seeds of the plant that is growing right now! Perhaps the seeds have lain dormant, and rain exposed them this year. 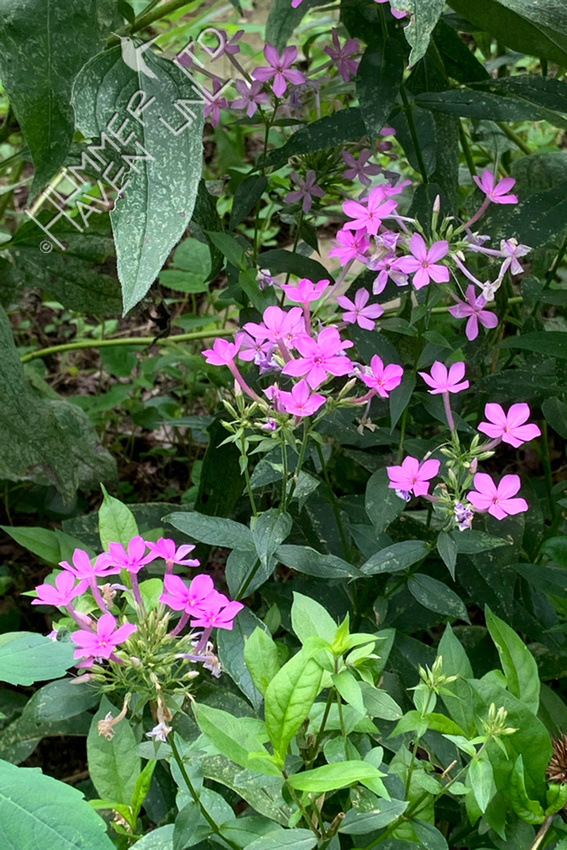 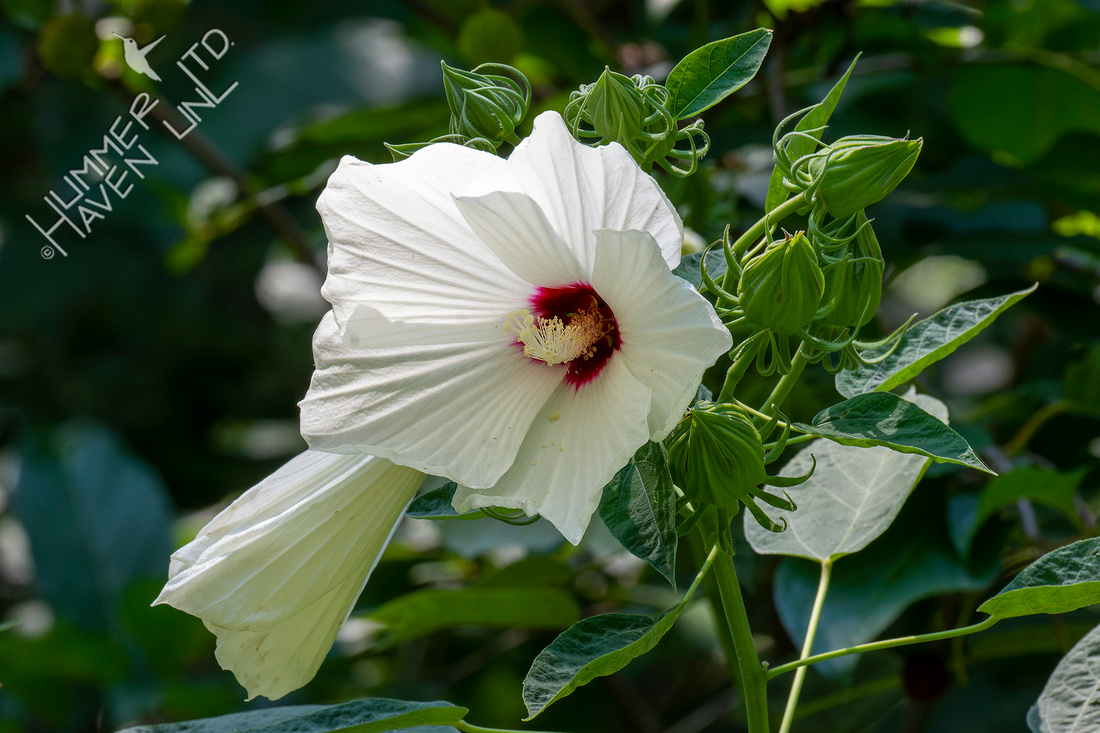 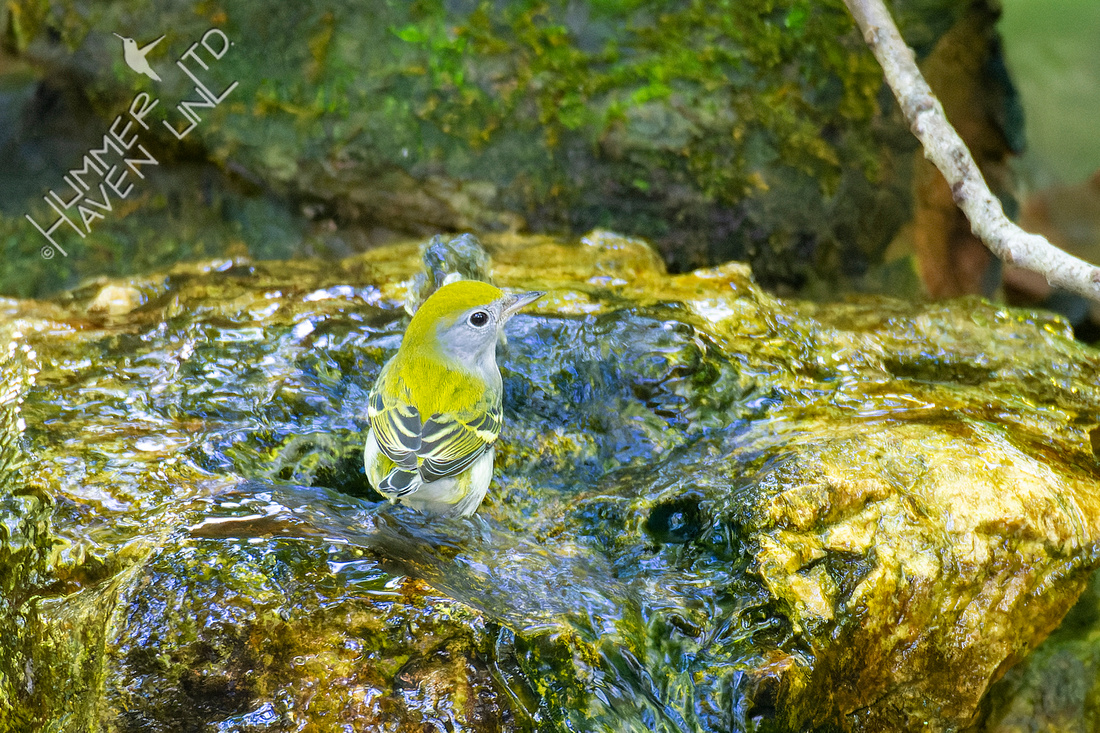 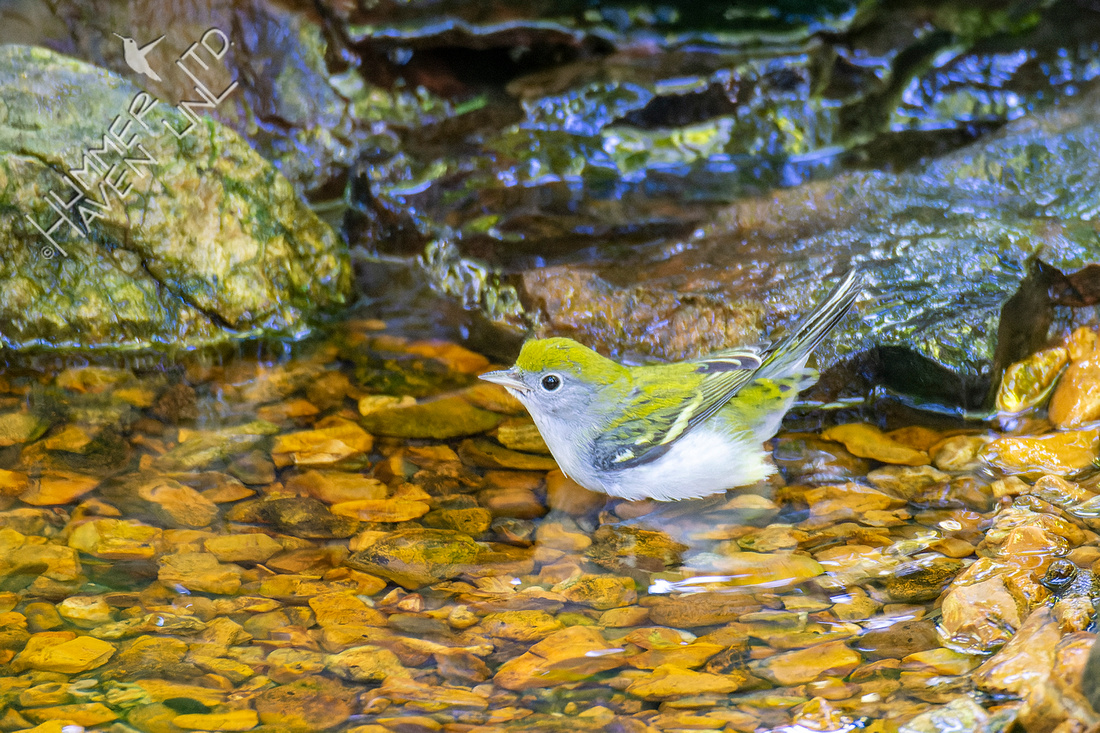 A week ago, the first Chestnut-sided Warblers showed up, all first year females. 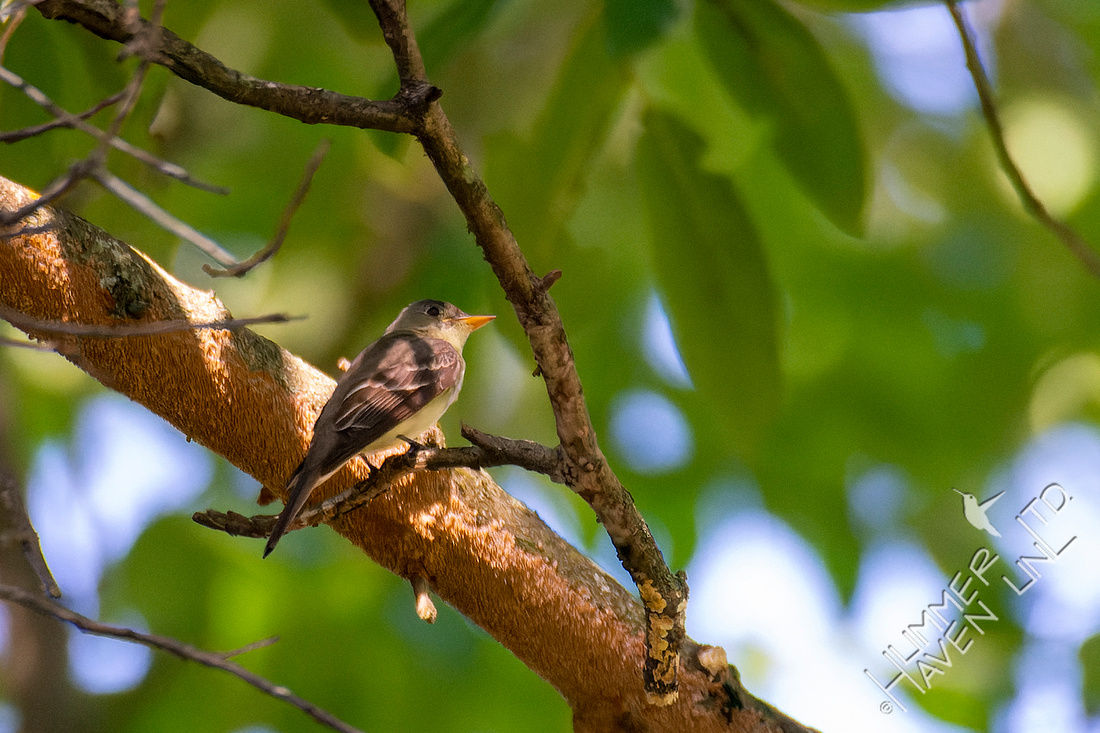 A Least Flycatcher was also seen perched and fly-catching from a limb in a Shingle Oak (Quercus imbricaria). 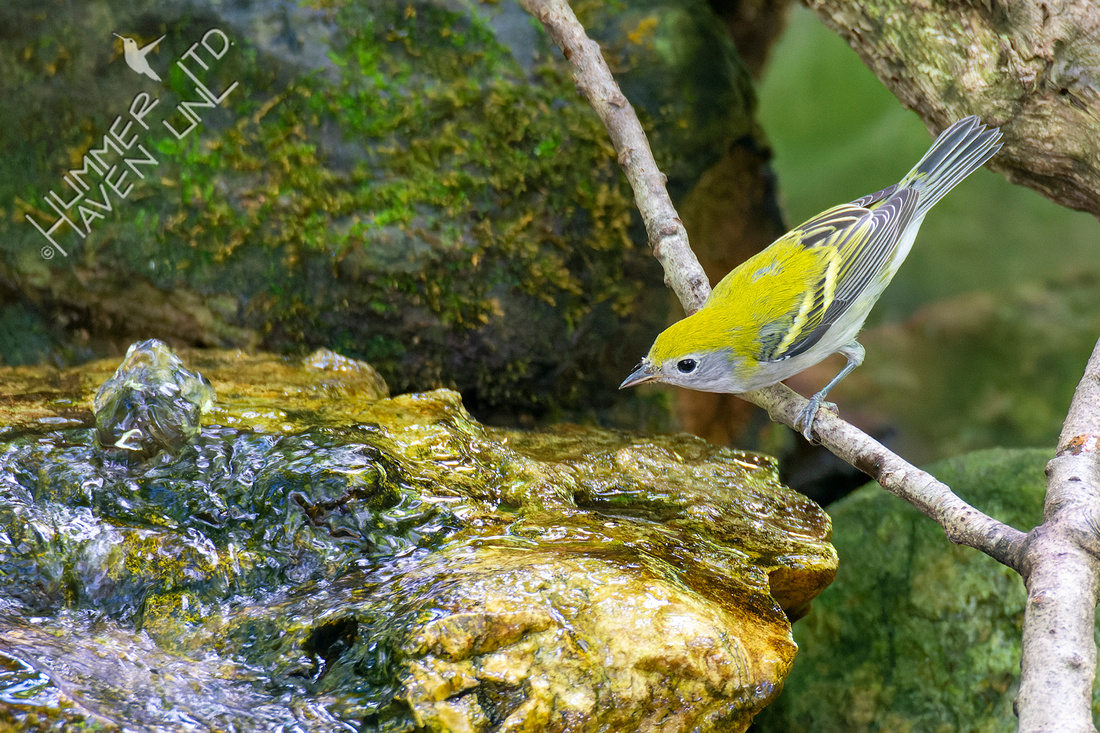 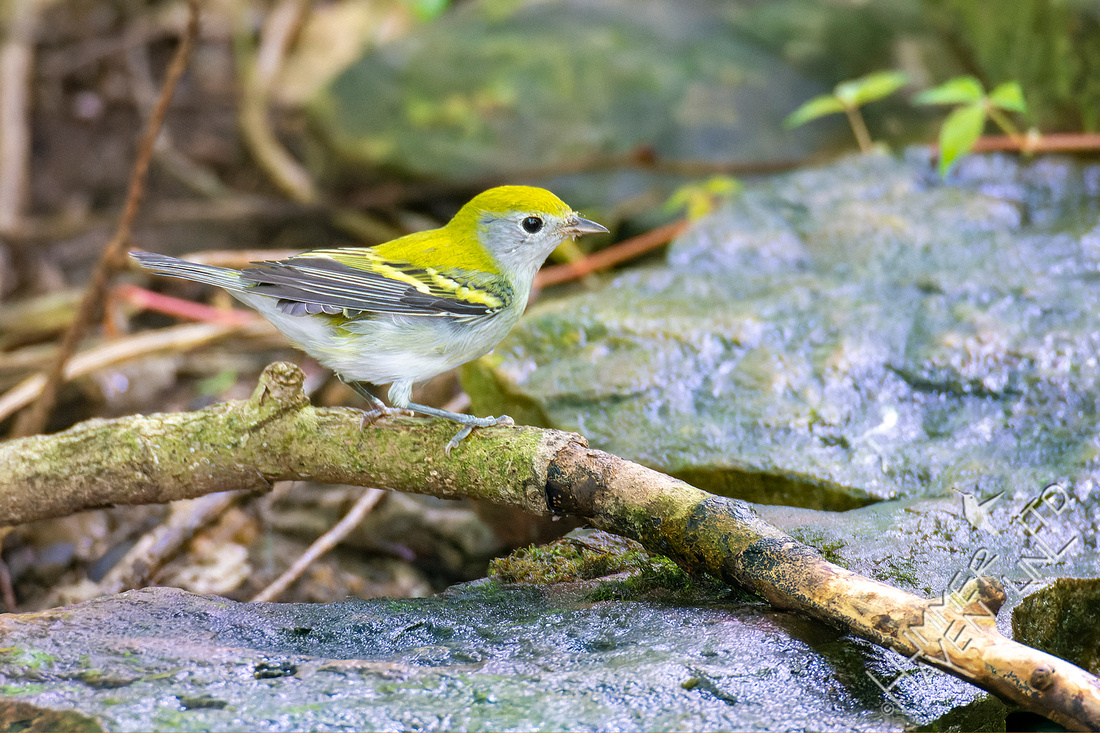 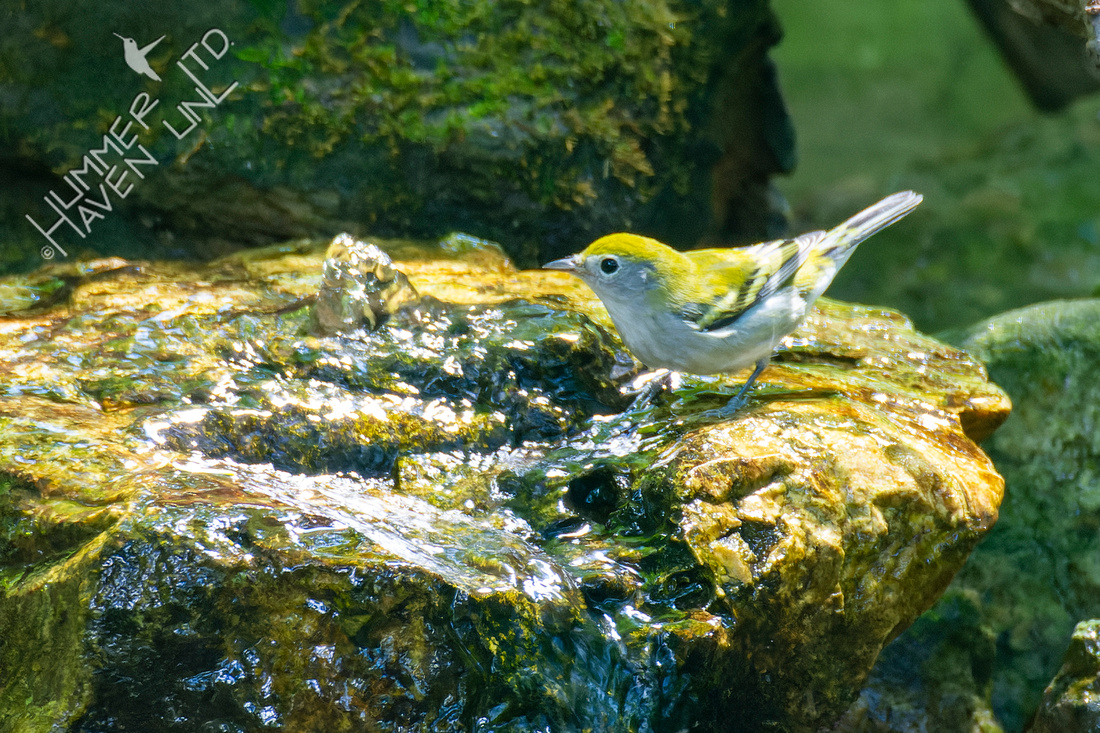 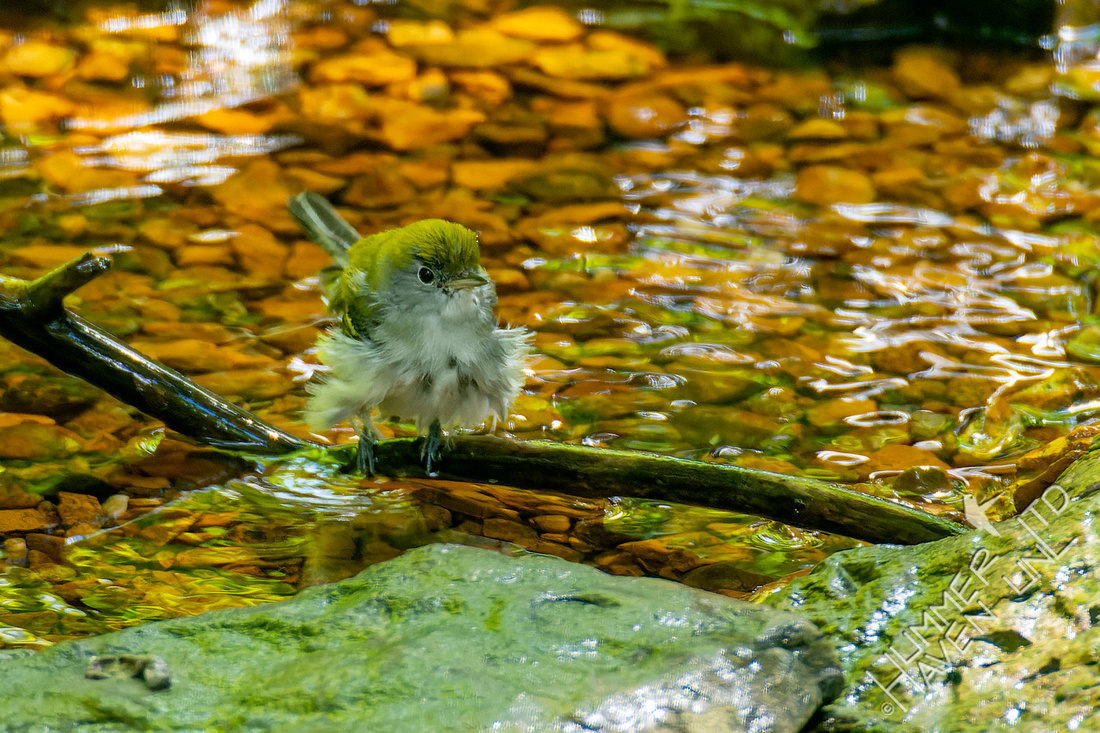 The Chestnut-sided Warblers continued to come into the bubbler area all through the day. There were at least two, maybe five or six. 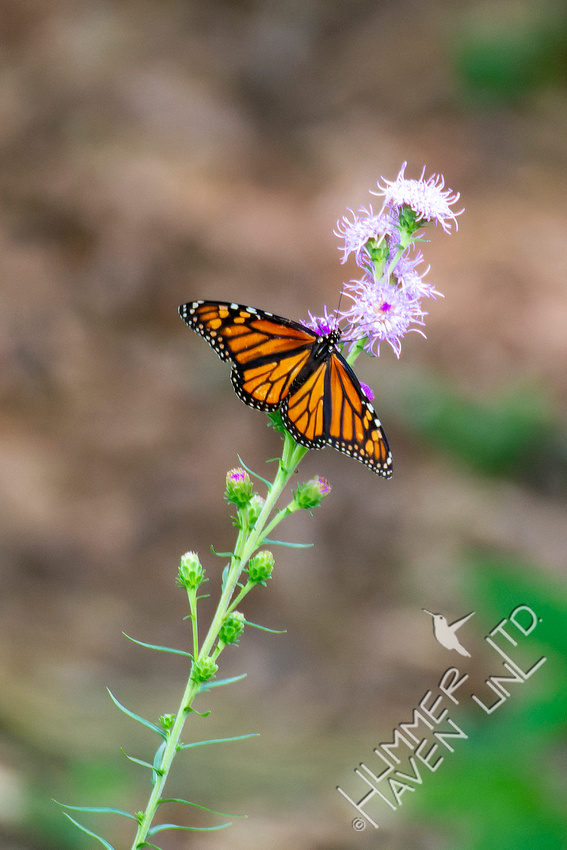 The next evening, we saw another Monarch in the garden, this time it was a female. So, the following morning, I spent more time looking around the garden. Maybe I'd missed something! 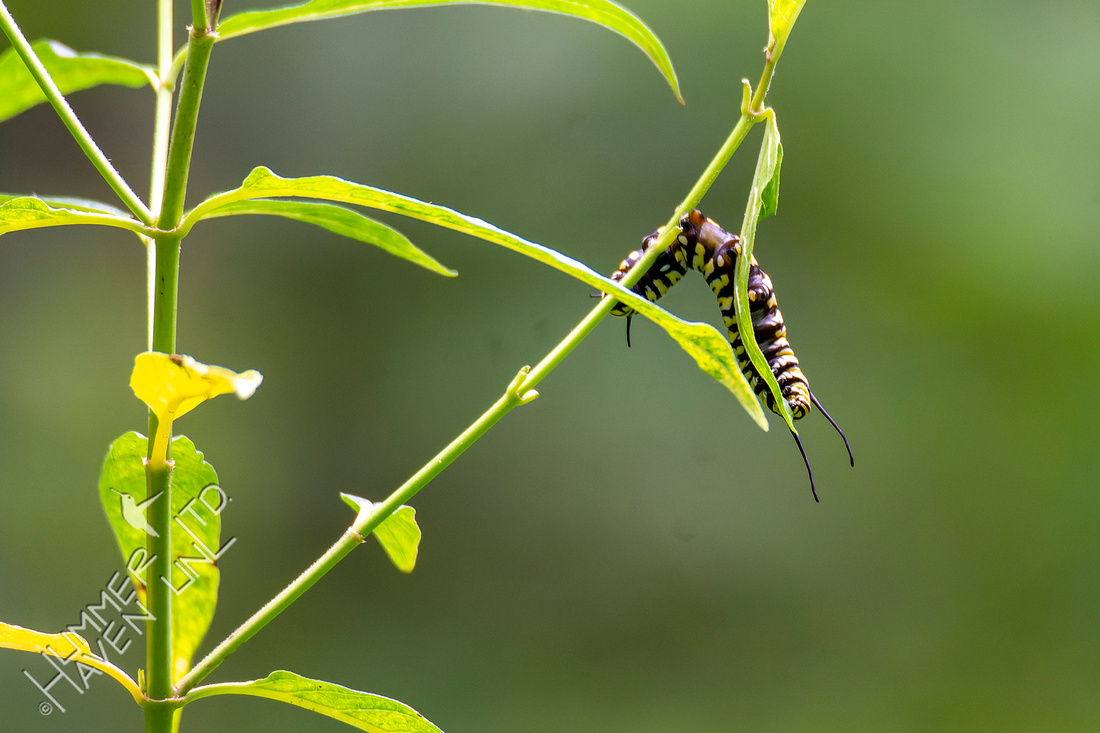 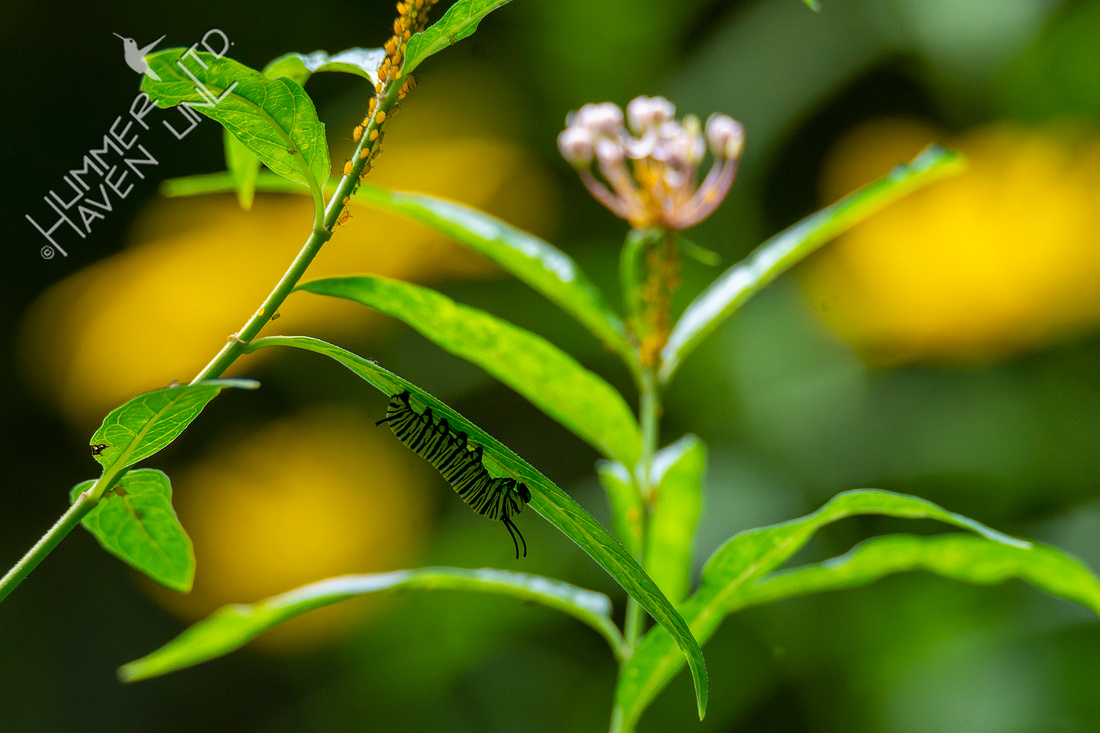 To my surprise, there were two good-sized Monarch caterpillars on the Marsh Milkweeds! Obviously, a female had visited, perhaps 10 days earlier, to lay the eggs. Other insects were also busy in the garden. 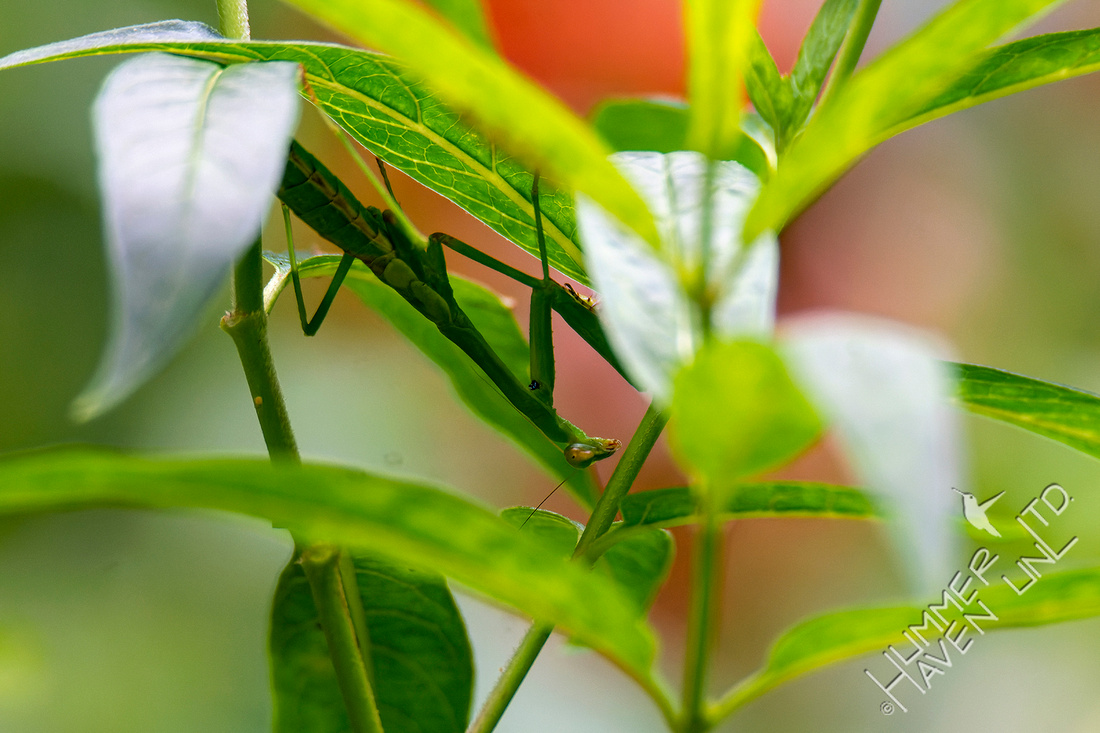 In one patch of milkweed, a Praying Mantis was hiding in plain sight. 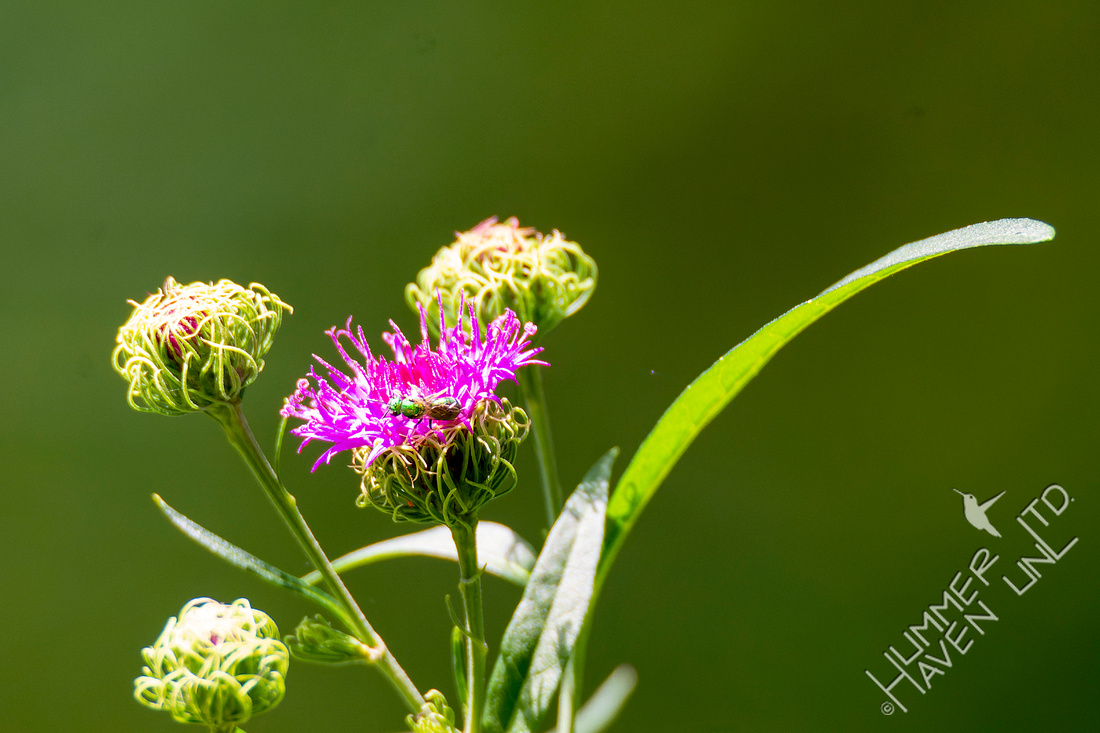 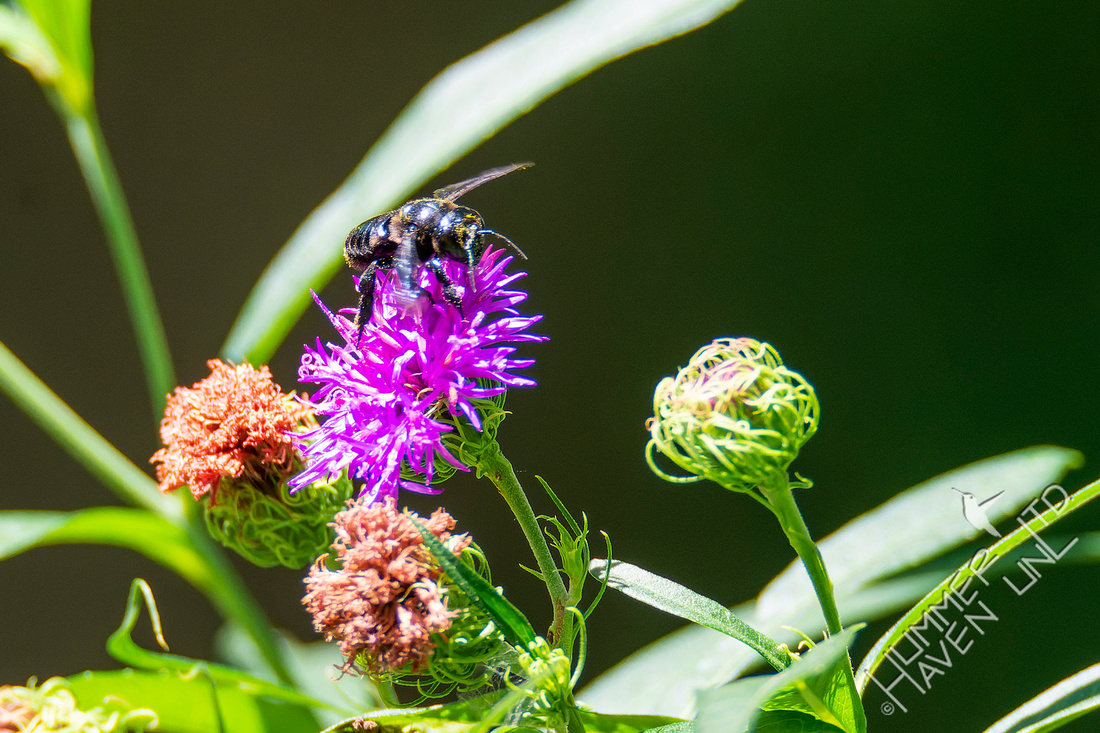 Two native bees were on the Ironweed (Vernonia arkansana). 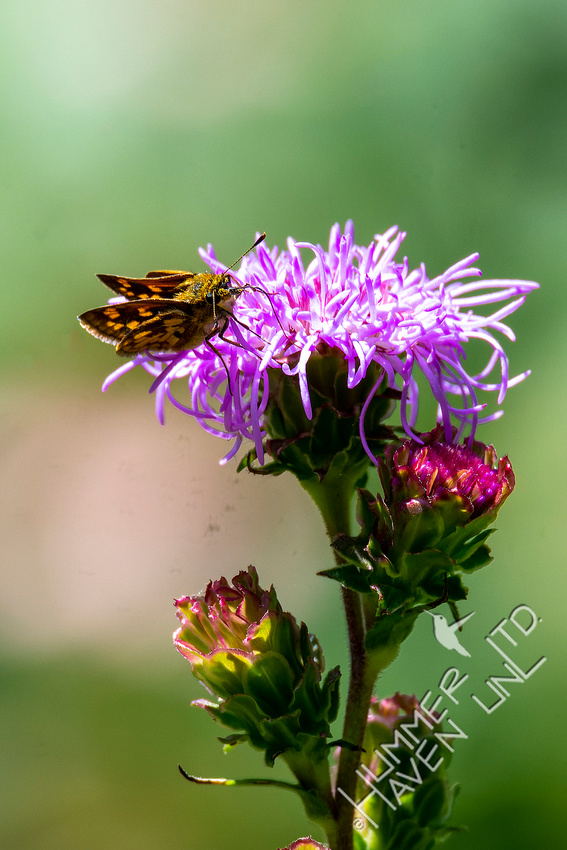 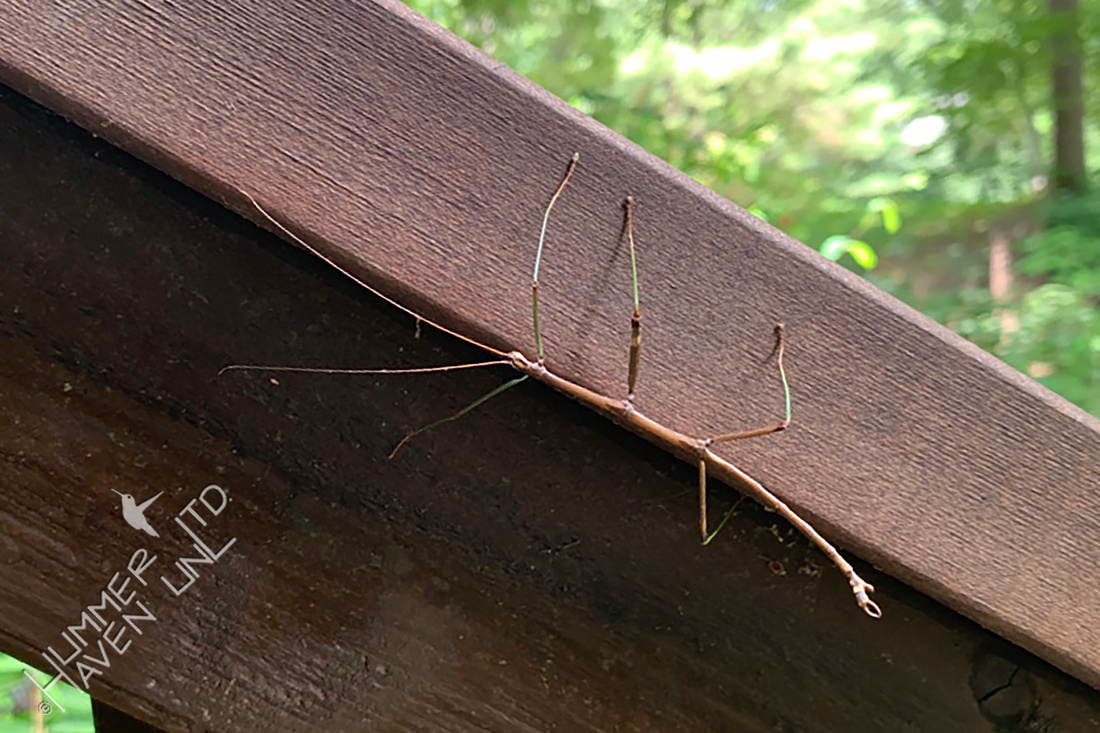 A walking stick was on the railing as I passed by. 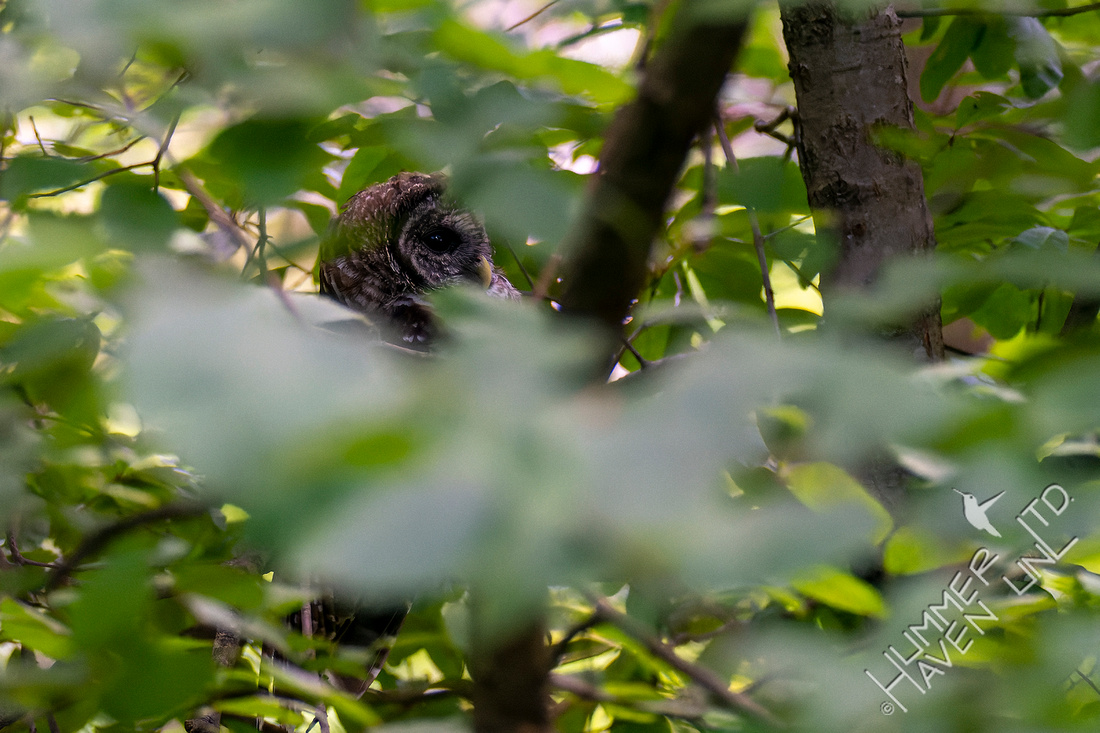 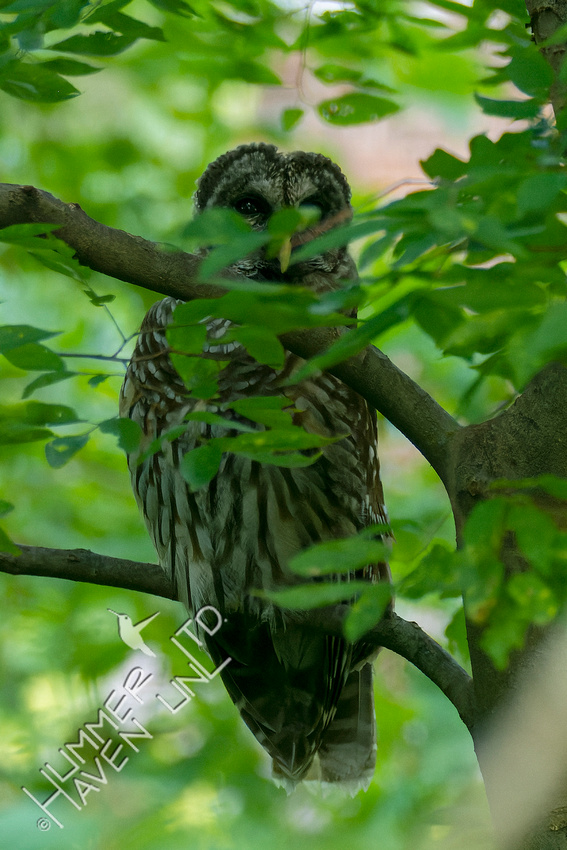 We were finishing dinner when the birds started fussing. Dan saw the large bird land near the base of the Pond Cypress. All this fuss was for a Barred Owlet! It was our first confirmation of a young bird this year. We'd been hearing the family hootenanny quite often at dusk, at dawn and during the night. 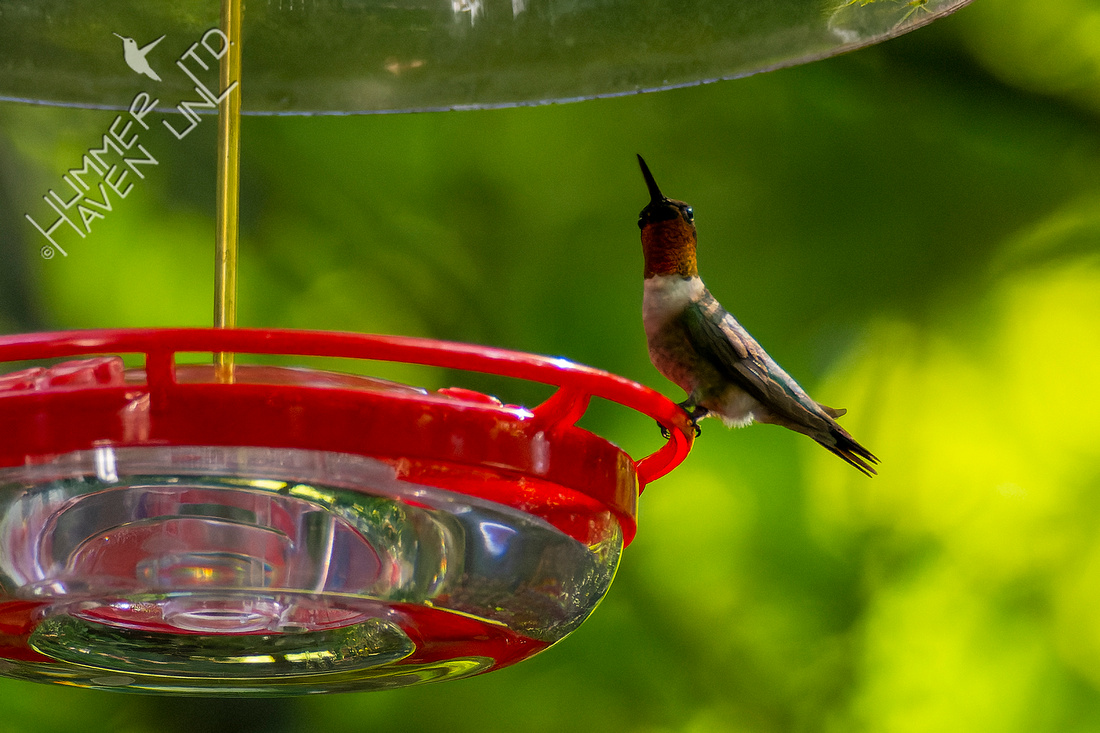 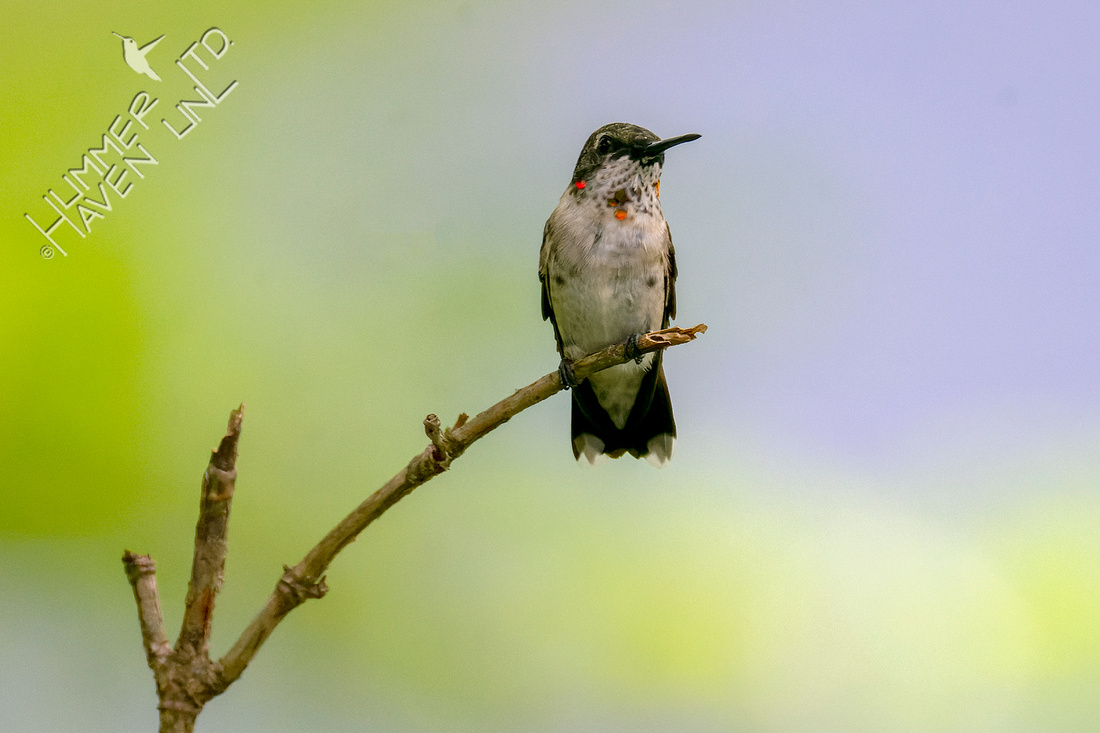 As you watch those Ruby-throated Hummingbirds, adult and immature alike, chase each other from feeders and flowers, here are some interesting words to consider that were posted on MOBirds today from Lanny Chambers, licensed hummingbird bander.

"The next week is historically the annual peak for Ruby-throated Hummingbird numbers in Missouri. Bear in mind, this is mainly due to the flow of southward migration, and many of today's birds are not the same individuals you saw yesterday. As for the "4X rule," I think it may be conservative; at my home I almost never see more than two hummers at one time (i.e., in a chase), yet a couple of days ago I banded nine in one afternoon, without a single recapture of a previously-banded bird. So, even yards without hordes of hummingbirds are probably feeding many more individuals than is obvious. A friend and fellow bander in Colorado was feeding 9 gallons of syrup daily last time I talked with him two weeks ago, and expected to reach 12 gallons by Labor Day. A rough rule of thumb is 1,000 birds per gallon per day. Imagine filling 25 30-ounce feeders twice every day!

Keep your feeders clean, and watch for Rufous or other western hummers passing through between now and late December. Some of you will remember the Allen's Hummingbird that visited me on Thanksgiving Day 2008." 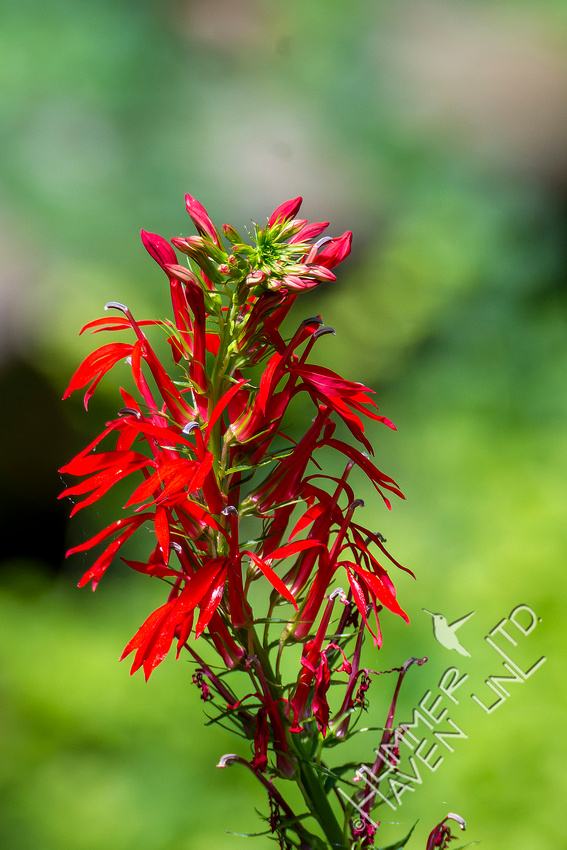 Thank you, Lanny! Typically, I clean and change the feeders every fourth morning. That schedule in this heat and humidity seems to prevent black mold from starting up around the ports.

Enjoy the birds, more migrants will be showing up soon!