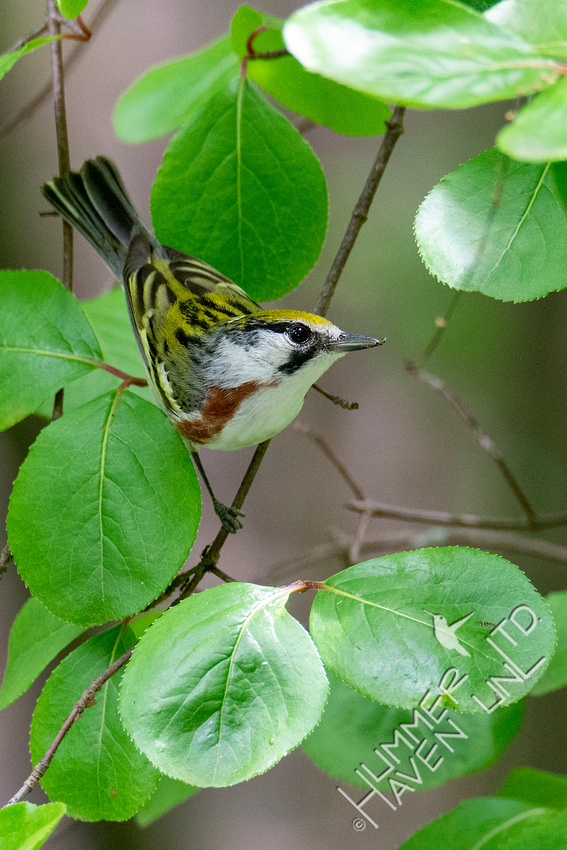 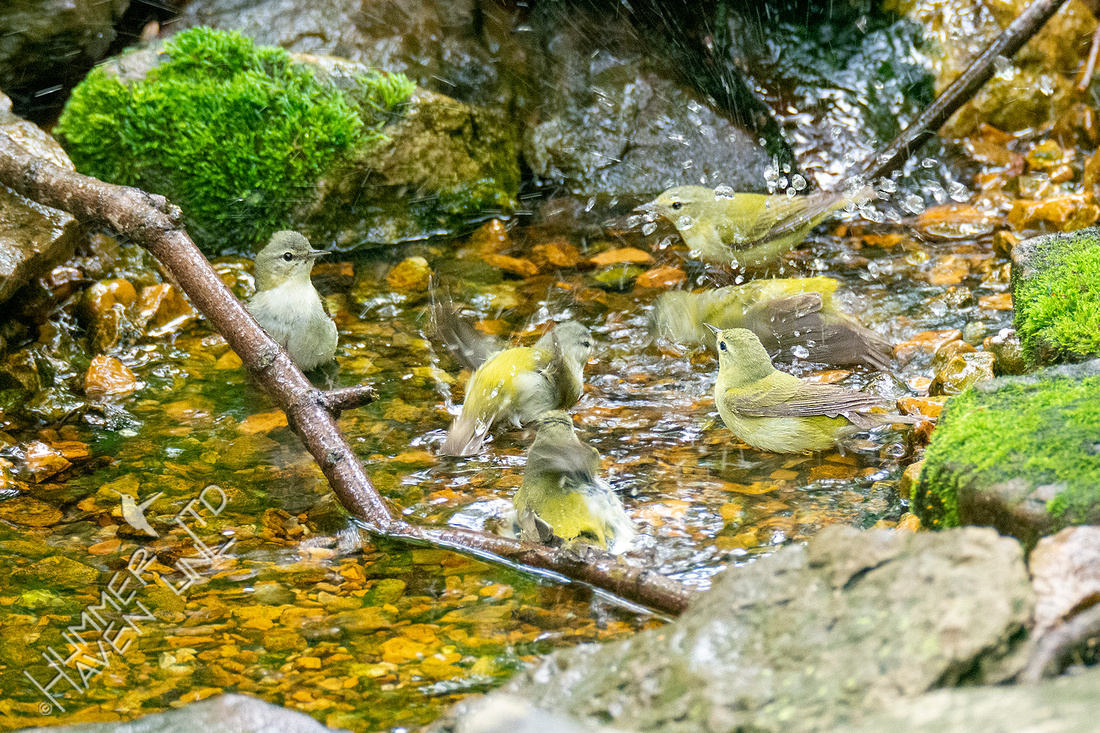 The last of the spring migrants have moved through the area. This Chestnut-sided Warbler came in with a mixed flock that included at least a dozen Tennessee Warblers on May 19, 2021. 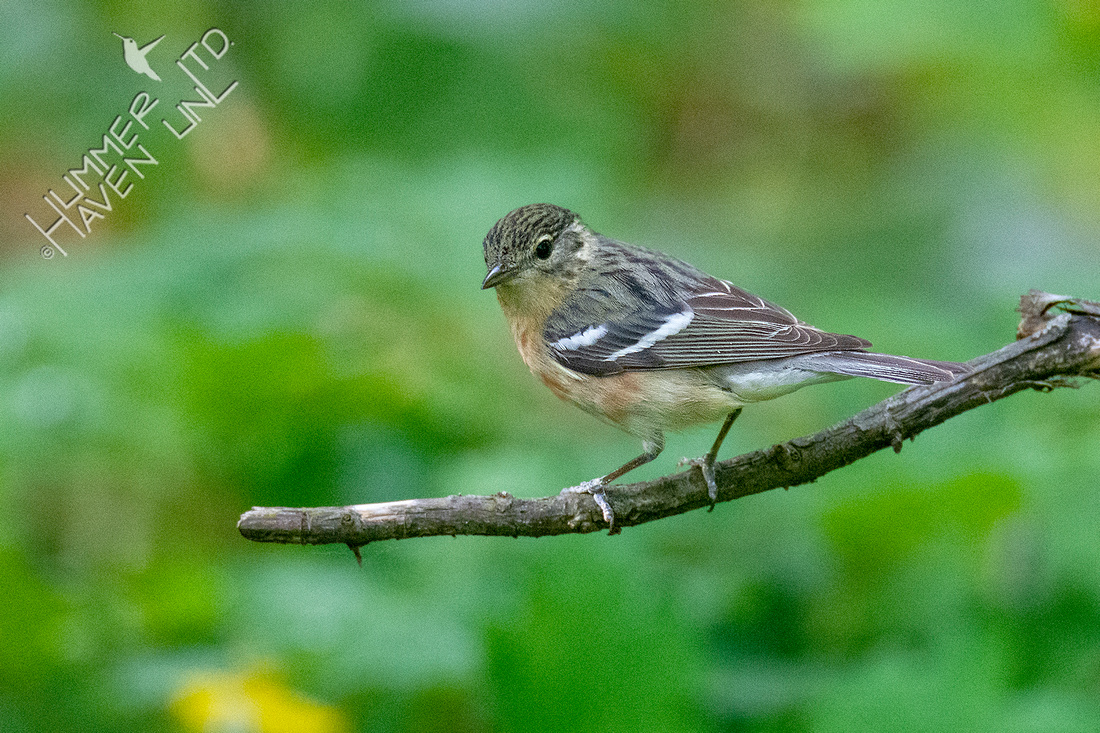 The following day, a female Bay-breasted Warbler graced the woodland. 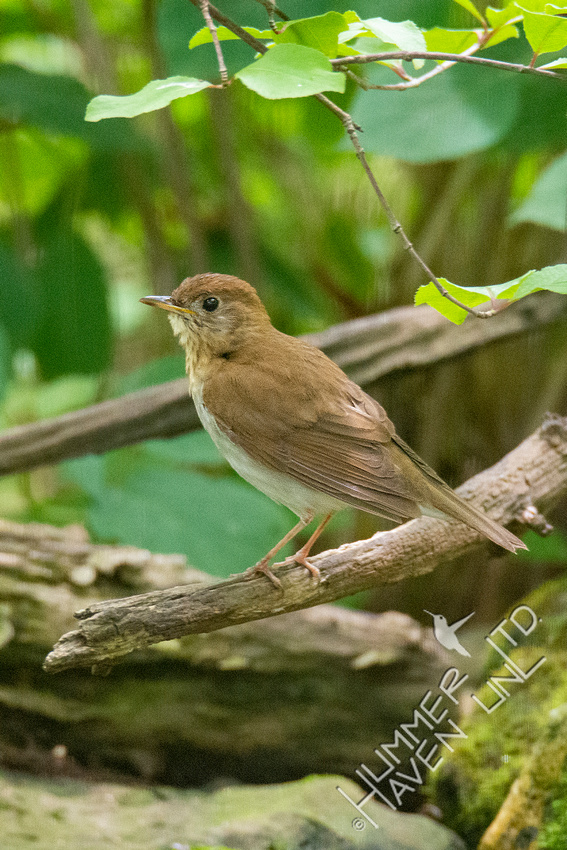 Five days later, another Veery was here and on May 27, a female Black-throated Green Warbler stopped in to feed and bathe. Now, it's the season for summer breeders! 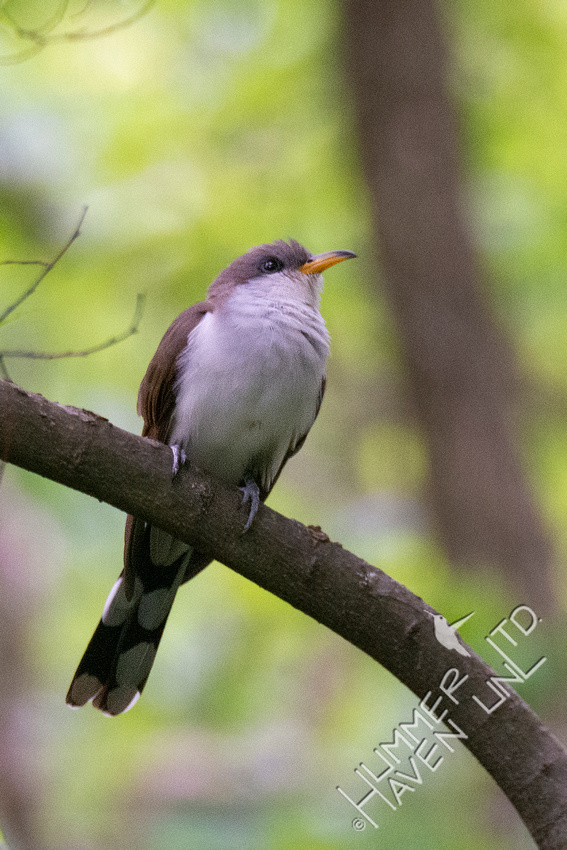 A Yellow-billed Cuckoo slipped silently into the woodland. In typical fashion, it looked all around for a meal, perhaps tent caterpillars, a favorite. 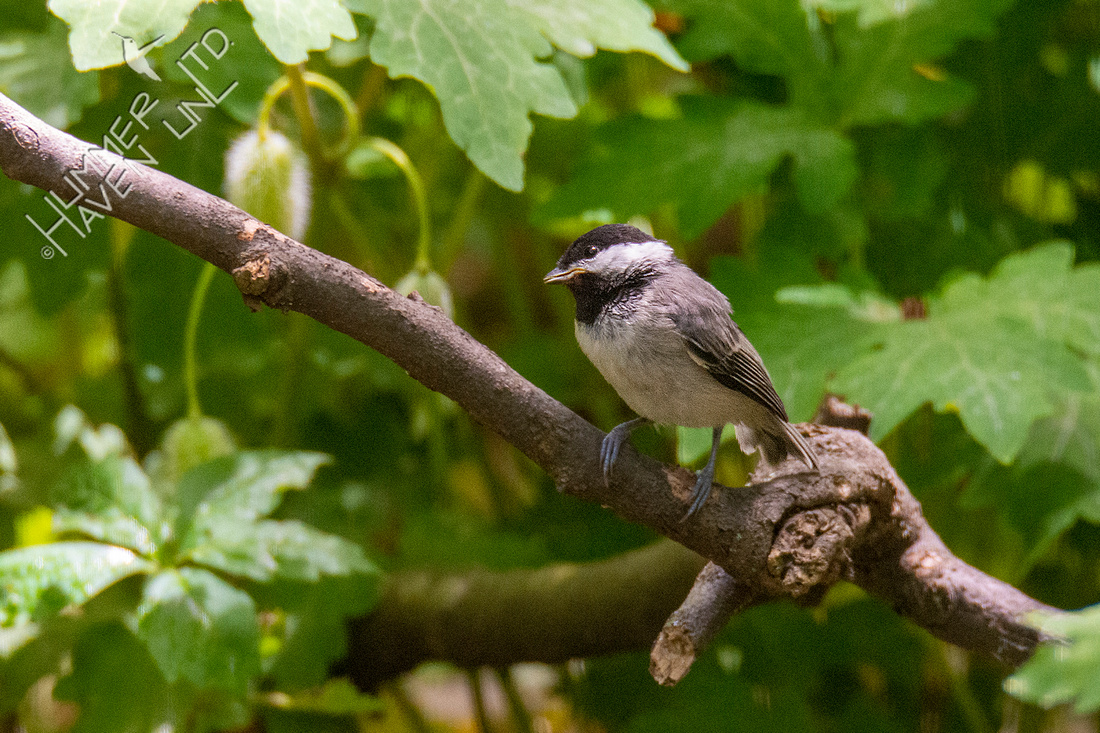 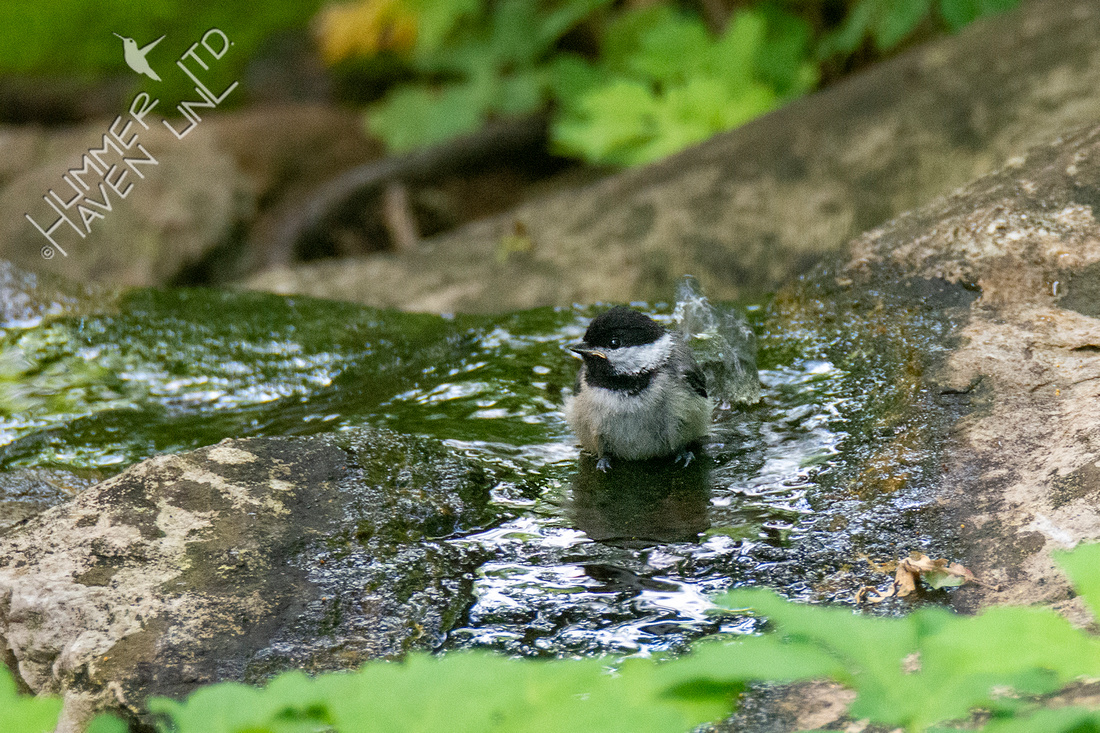 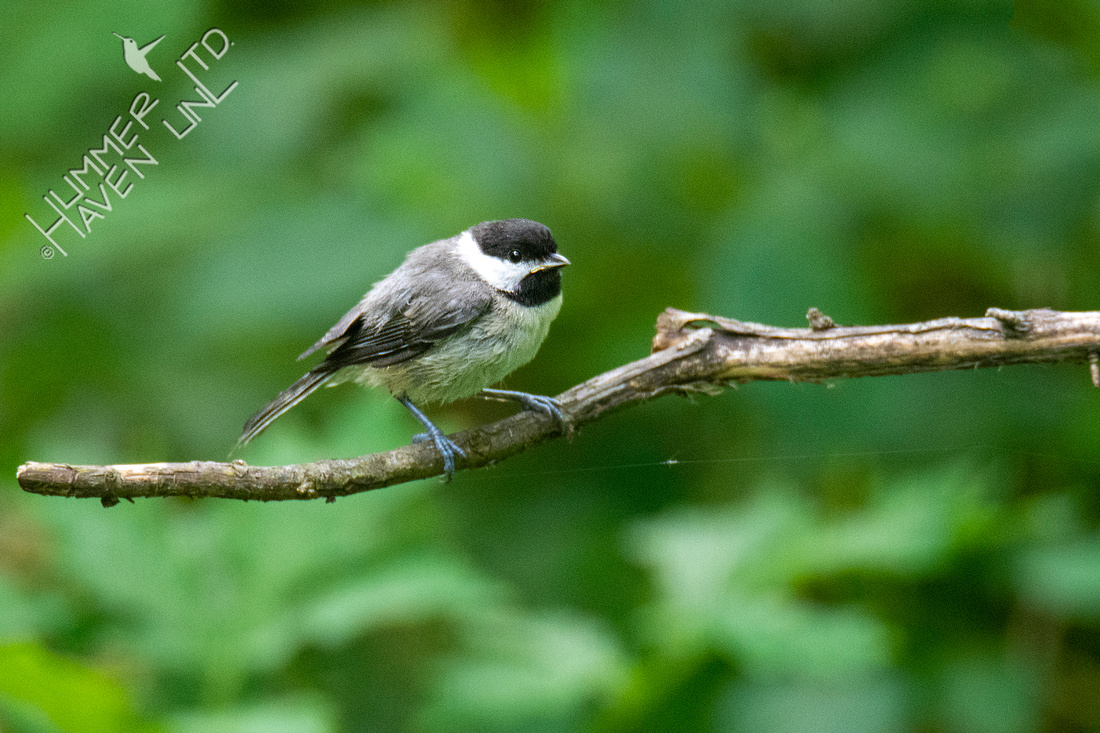 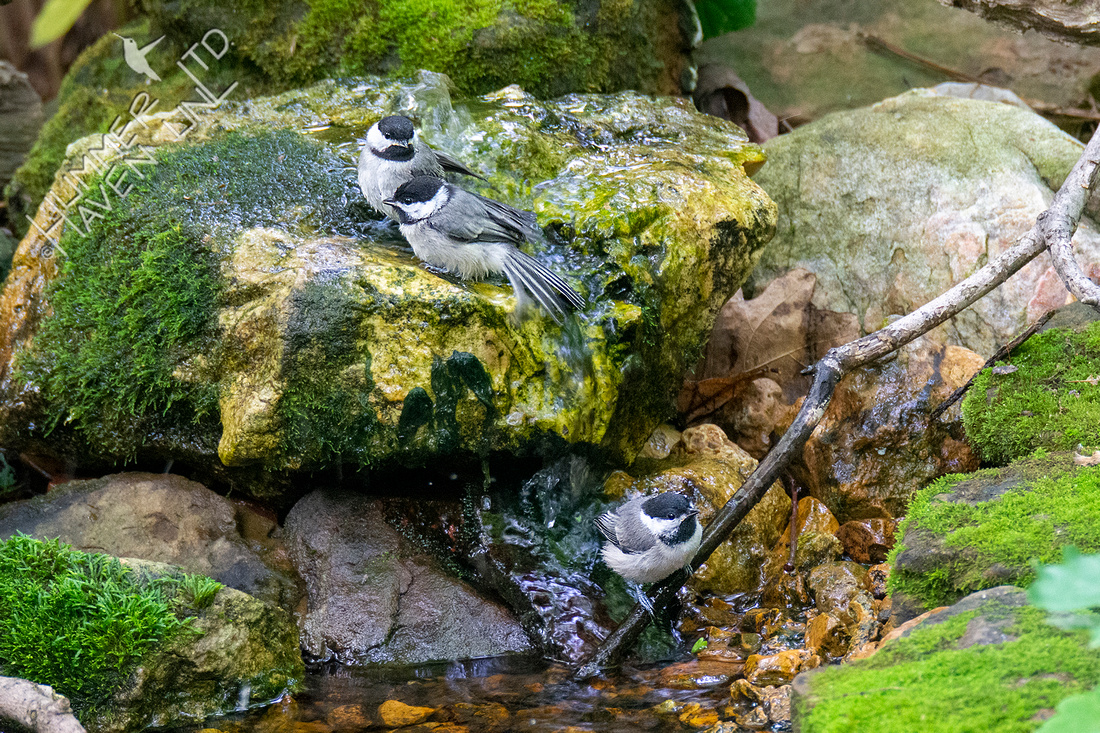 Most of the year, the diet of Carolina Chickadees is 80-90% insects and spiders. Dr. Doug Tallamy has taught us that one brood of this species requires 6,000-9,000 caterpillars! So, we've been pleased to see a well-fed brood of six Carolina Chickadees coming to the Bubbler now. They are bouncy little butterballs, just full of energy! It is truly gratifying to watch these little birds behaving so confidently in the safe haven we've established. Their proud papa is the bird we watched all winter, with the deformed leg. 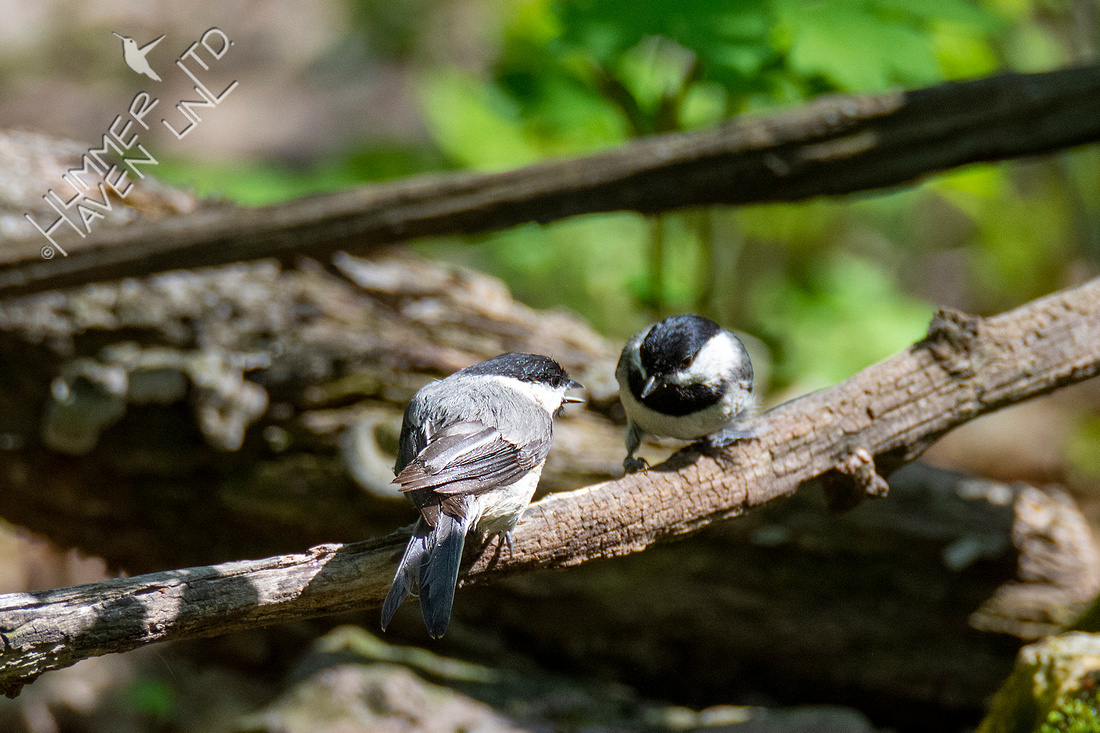 Here, the adults were pair-bonding and the male had just fed the female after mating in April. 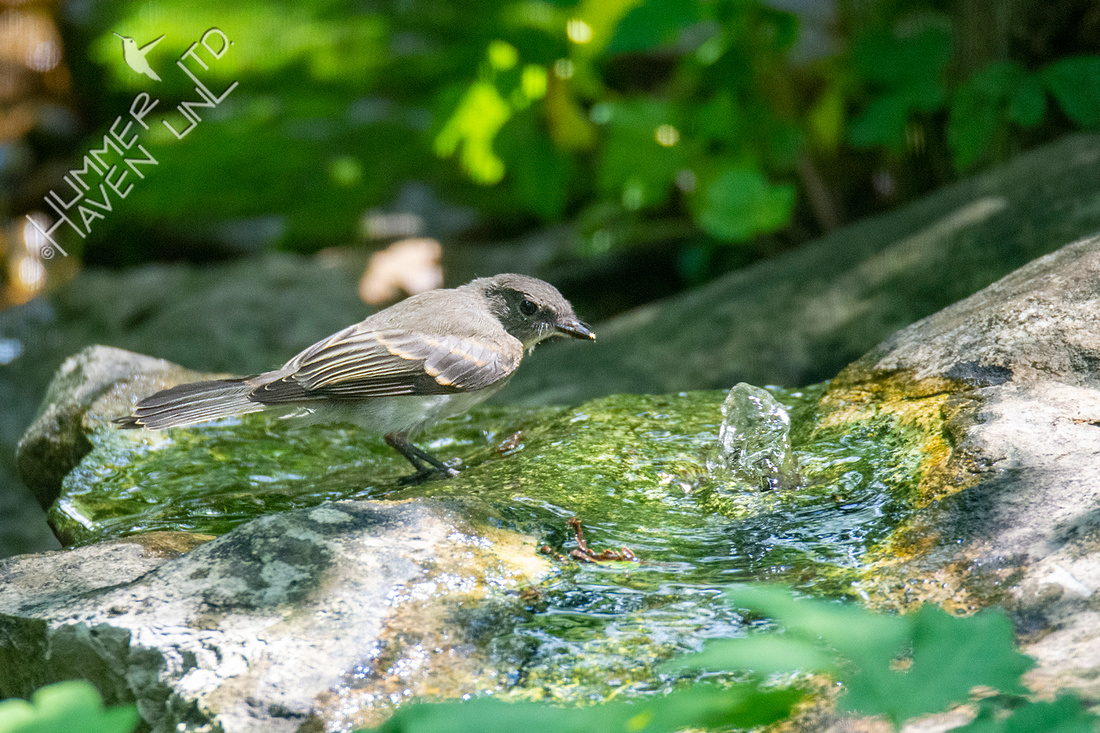 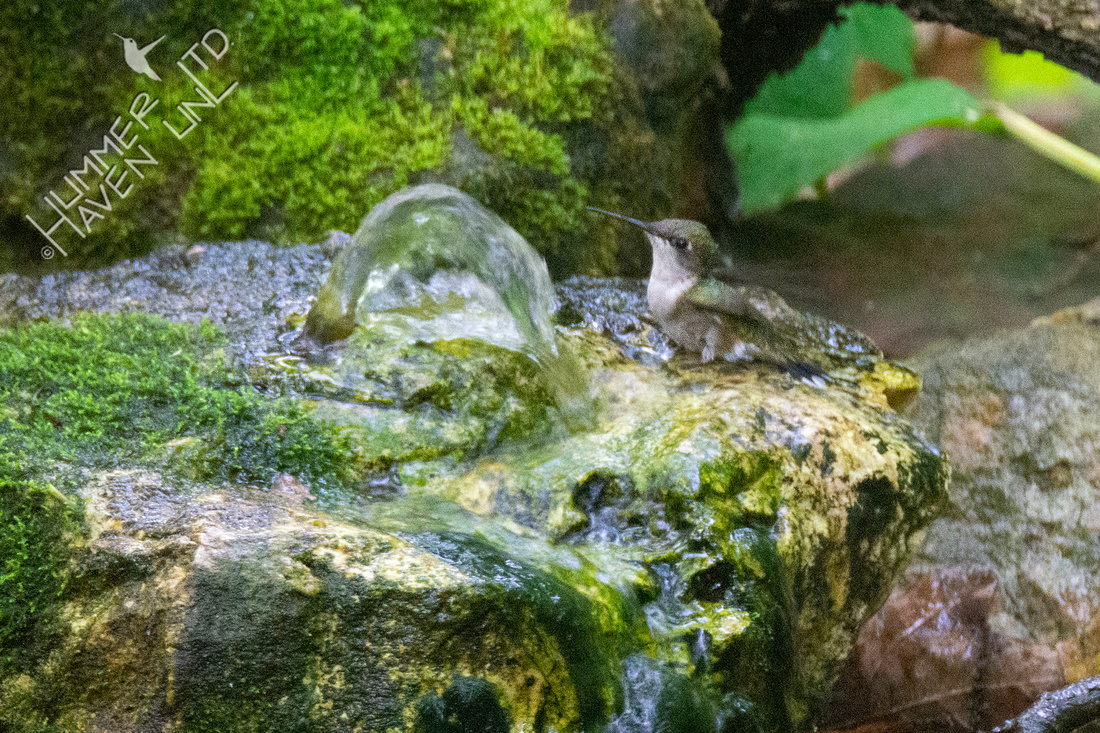 Other summer breeders have produced offspring, like this young Eastern Phoebe which was exploring the Bubbler. Also seen early one morning  was this female Ruby-throated Hummingbird taking a bath! I have seen the male dancing in the air above the female, so she may have built a nest and be taking care of young by now. 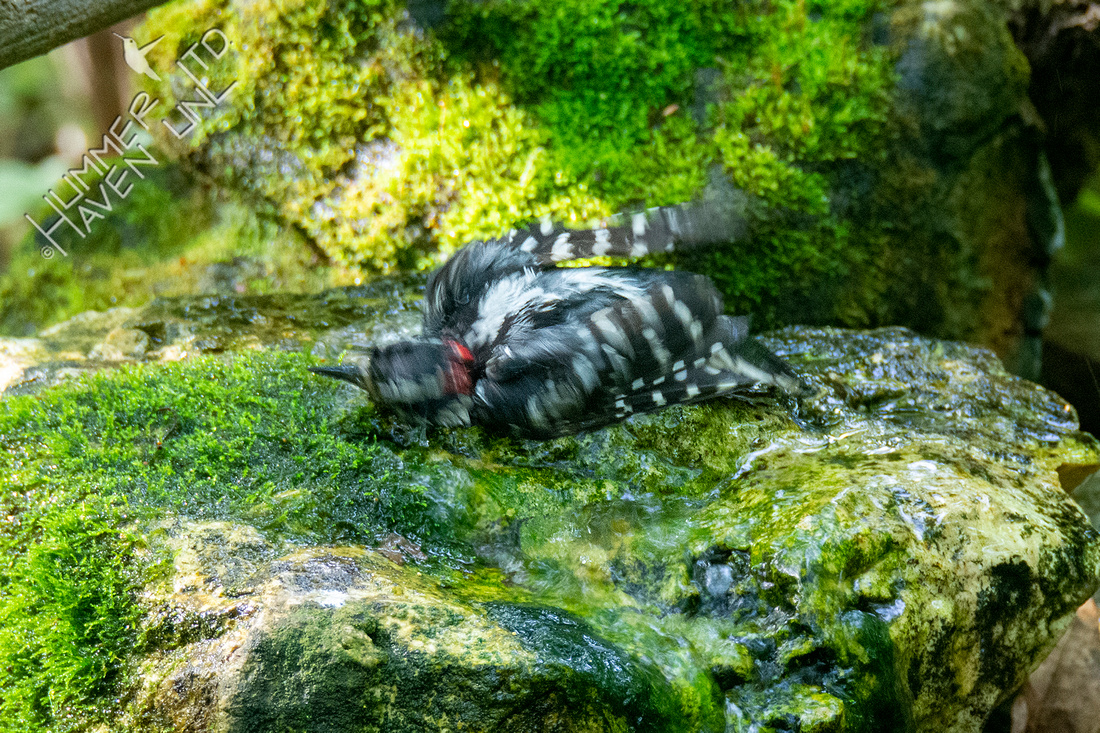 Downy Woodpeckers have young to feed and these birds have red feathers on the tops of their heads. The male took a quick break to bathe. 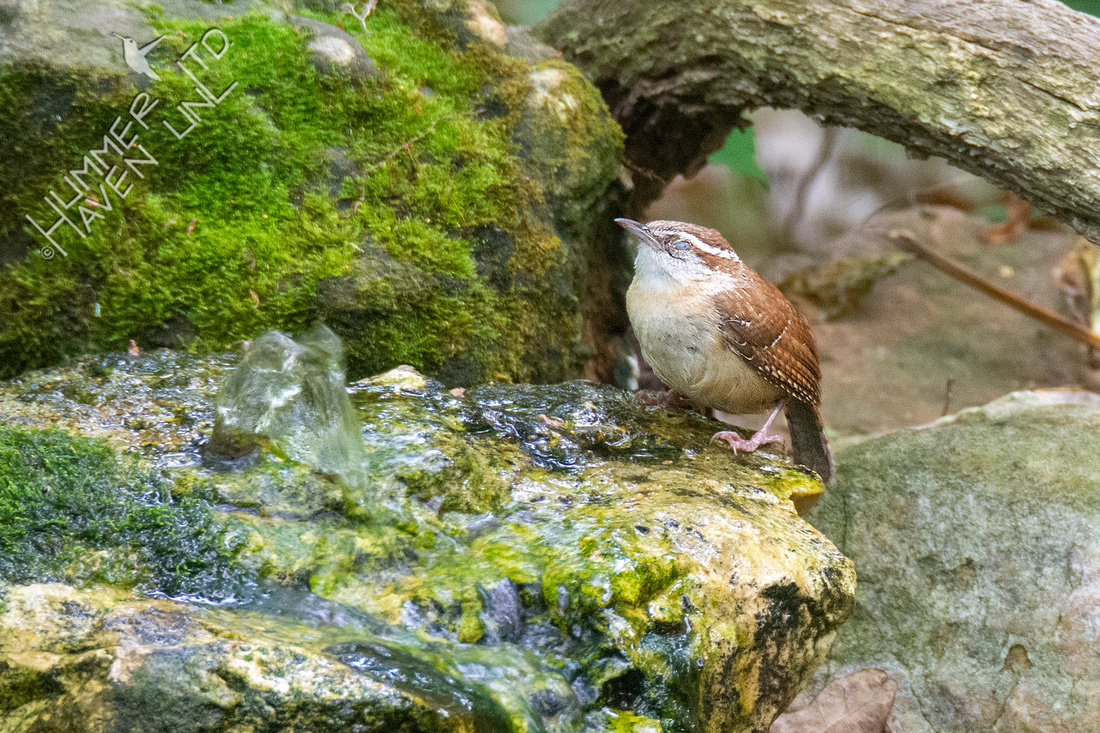 Two weeks ago, I kept an eye on this Carolina Wren, who was napping. And napping...for ten whole minutes! The reason was revealed yesterday. 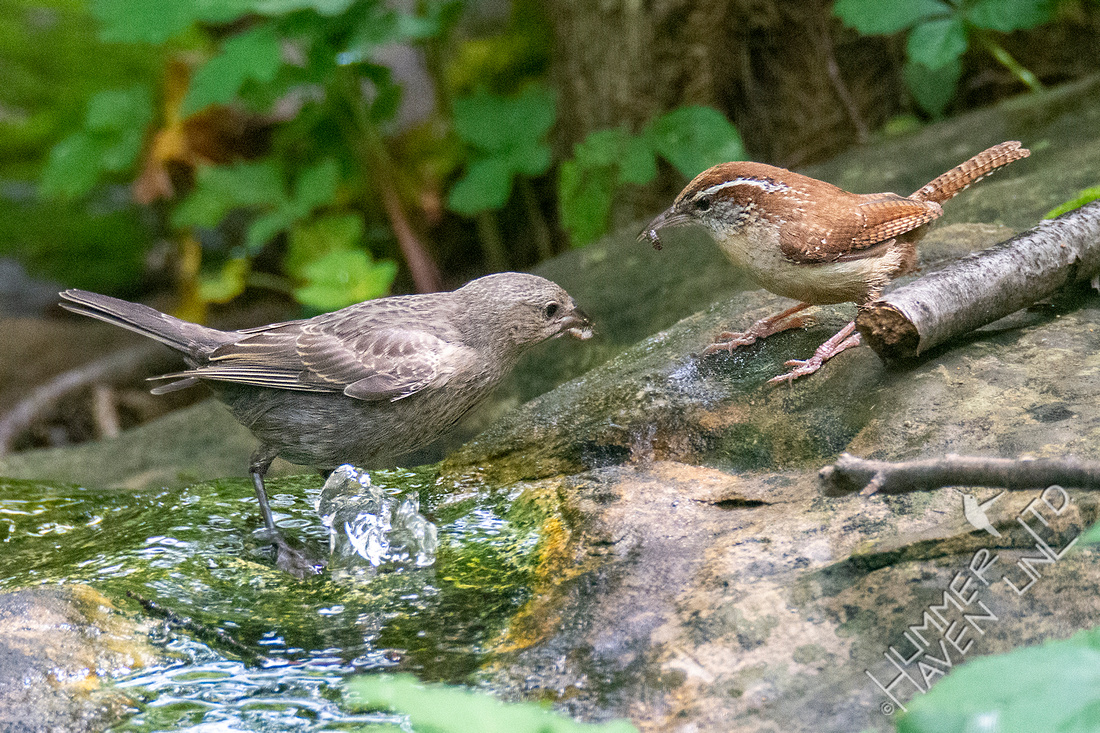 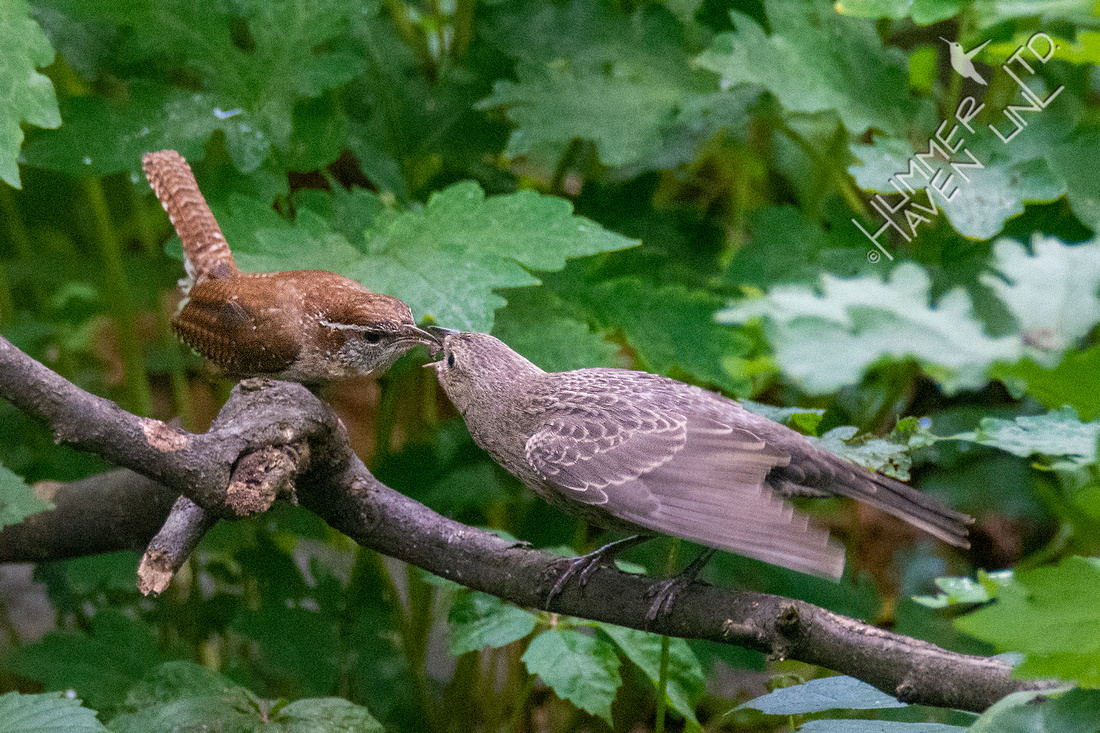 These wrens have been feeding a Brown-headed Cowbird, twice their size. The cowbirds lay their eggs in other species' nests. No wonder that poor wren needed a good nap! The adoptive parent had been in and out of the Celandine Poppies (Stylophorum diphyllum), foraging in the leaf litter beneath to find insects to feed this young bird. 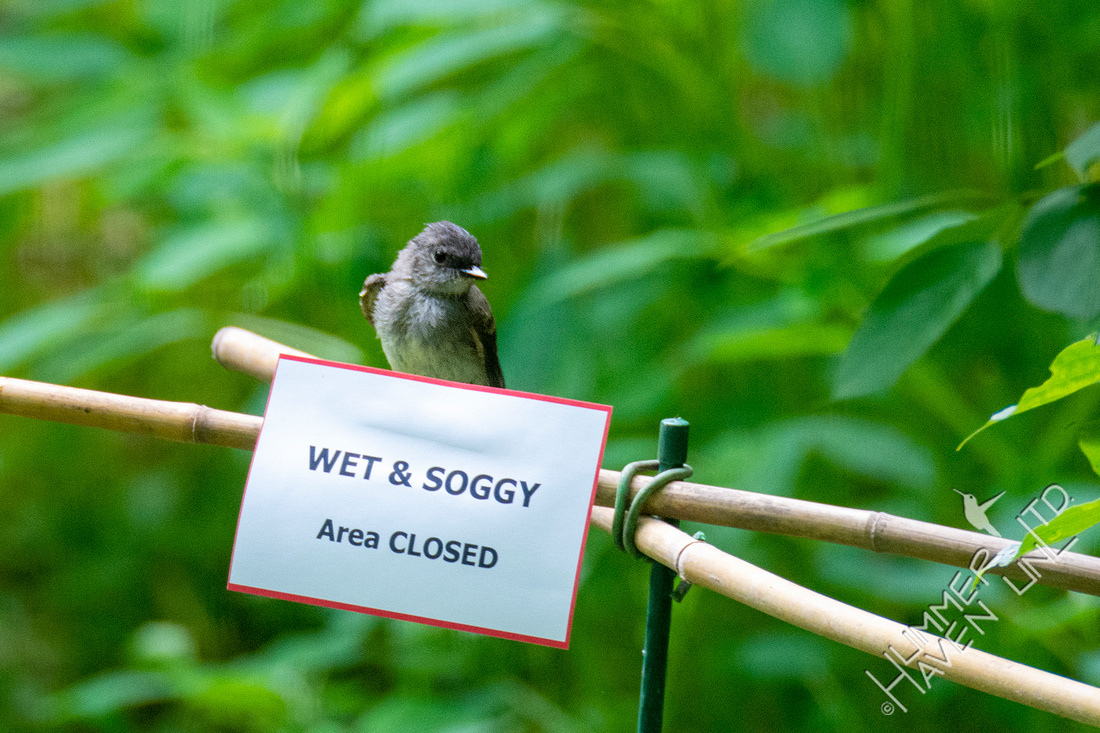 I realize it has been longer than usual for a new blog post, but we have not been slackers! Our garden was on the 2021 Native Plant Garden Tour this past Saturday. Tickets sold out within days, it was very well-attended. There have been 36 species of birds coming in to forage and feed their young, so the tour threw a bit of a wrench into the works for them. However, Sunday was recovery day and this young Eastern Phoebe was among the birds back in business, fly-catching in the swampy thicket on its own. 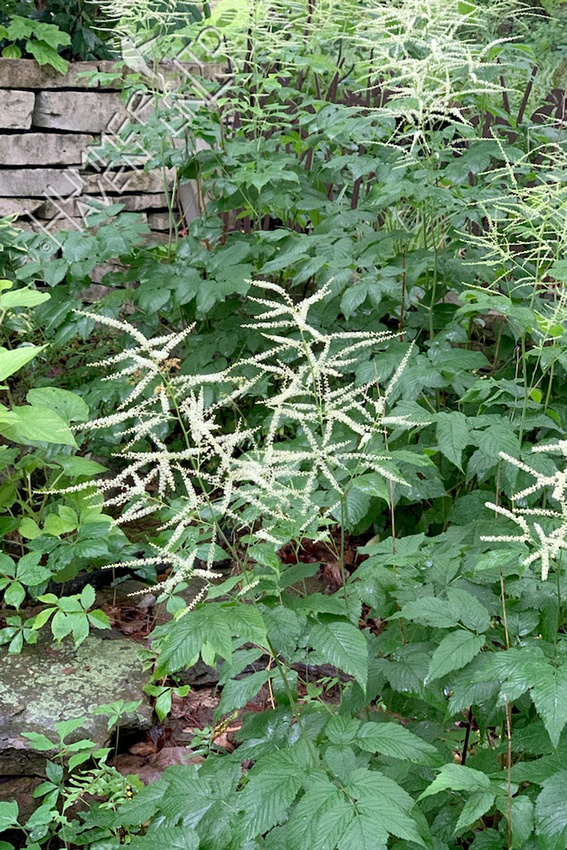 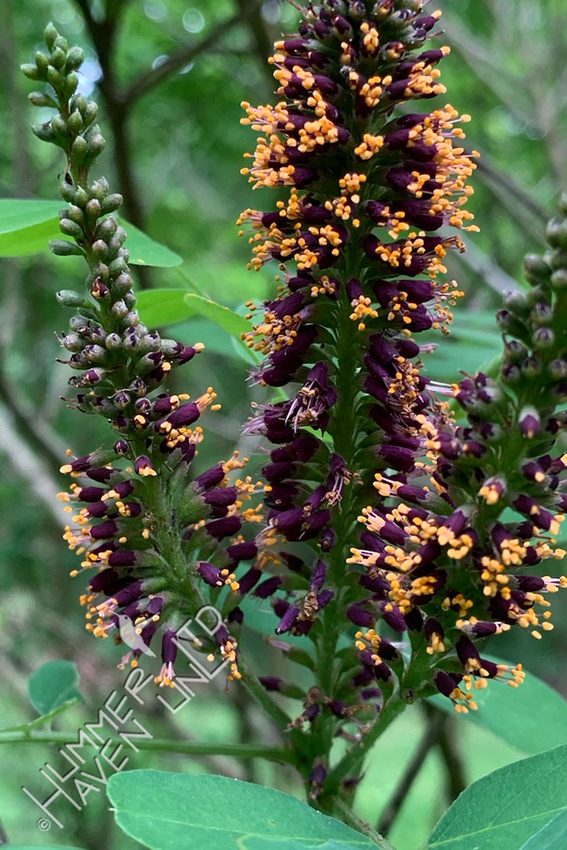 Goatsbeard (Aruncus dioicus) near the pond and Indigobush (Amorpha fruticosa) near the back property line were both in bloom. 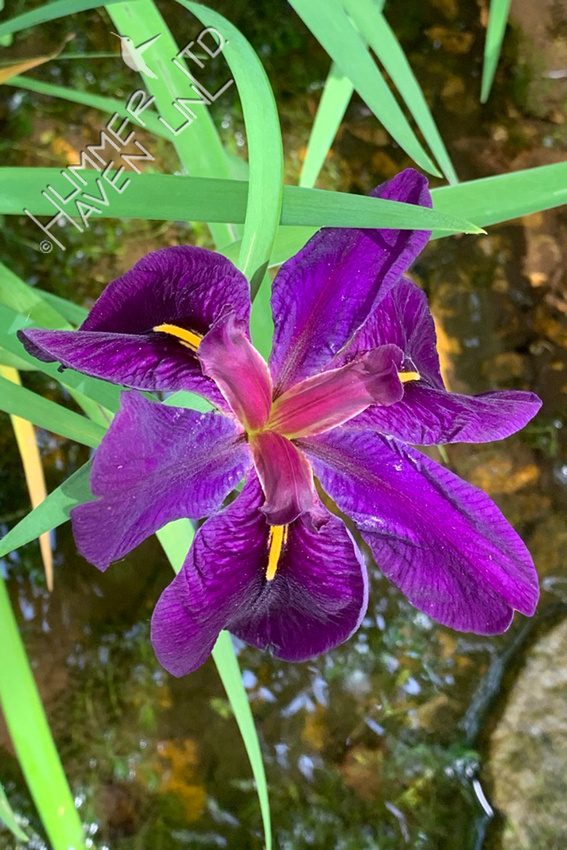 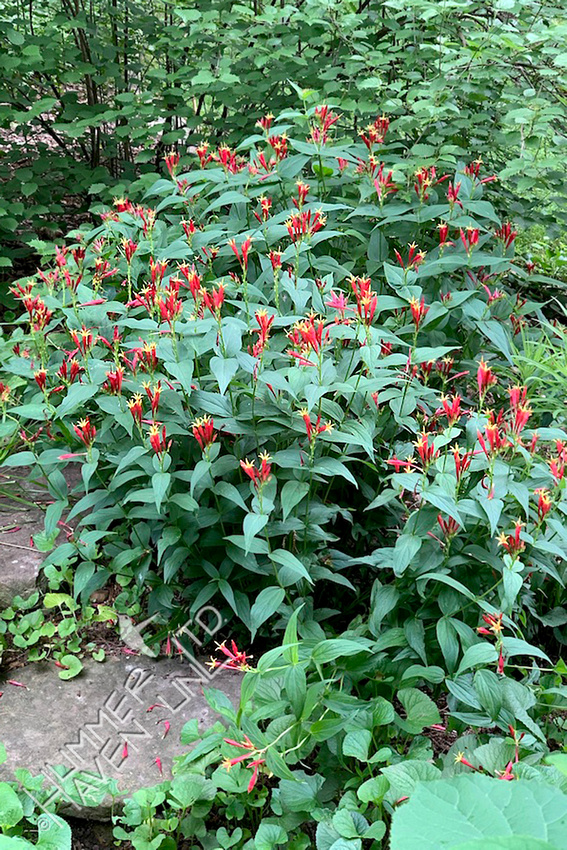 The Indian Pinks (Spigelia marilandica) were at their peak on Saturday. 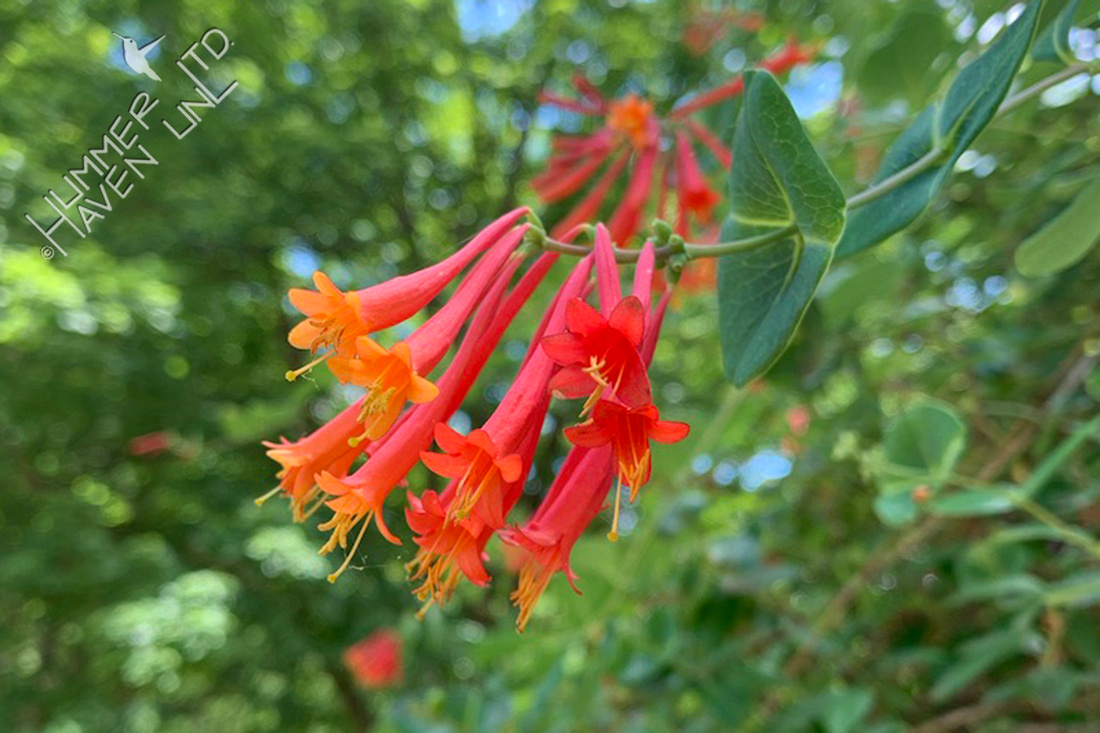 Our favorite vine greeted visitors in front and near the pond, Coral Trumpet Honeysuckle (Lonicera sempervirens). Hummingbirds sip its nectar.