Promises, promises...we are truly on the cusp of Spring!

We will be making the most of our time now to observe nature and share what we can capture with our different means of photography. A new bird species, FOY #40 was spotted first by Dan while I was getting some coffee on Saturday morning, 3-14-20. We don't see this species every year, last year a pair flew over, but it has been wet enough to tempt them to come in and check out the wetland.

Mallards! They dabbled and waddled, making the most of the ducky weather for a good twenty minutes. 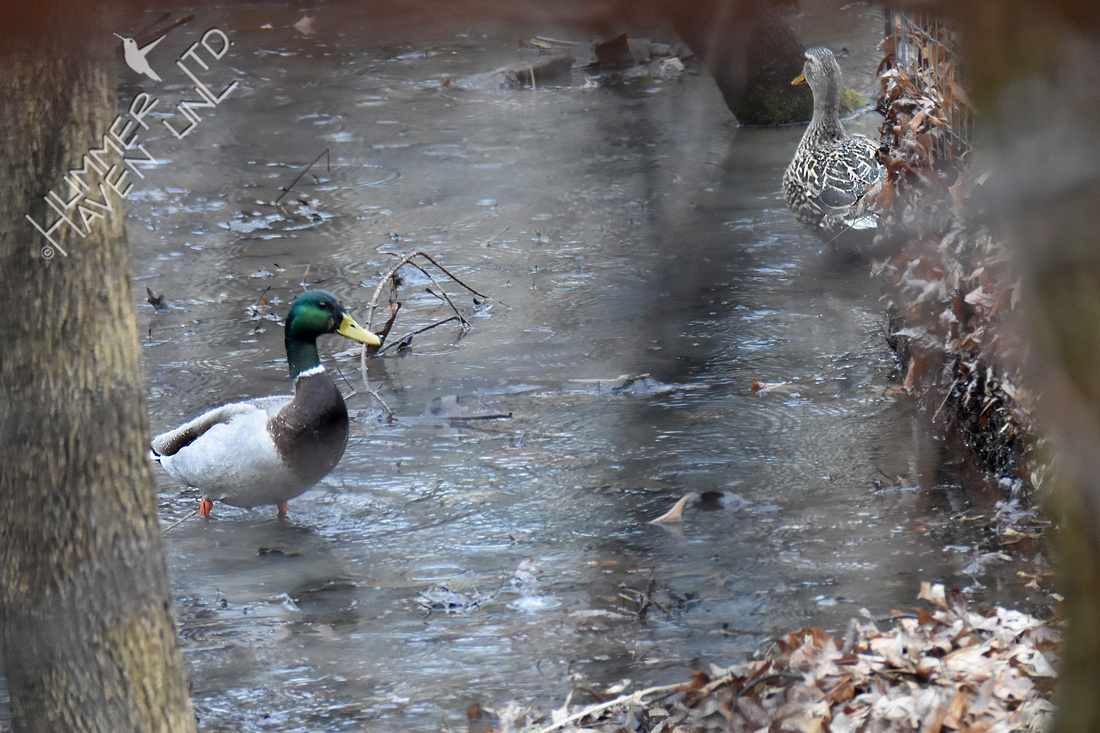 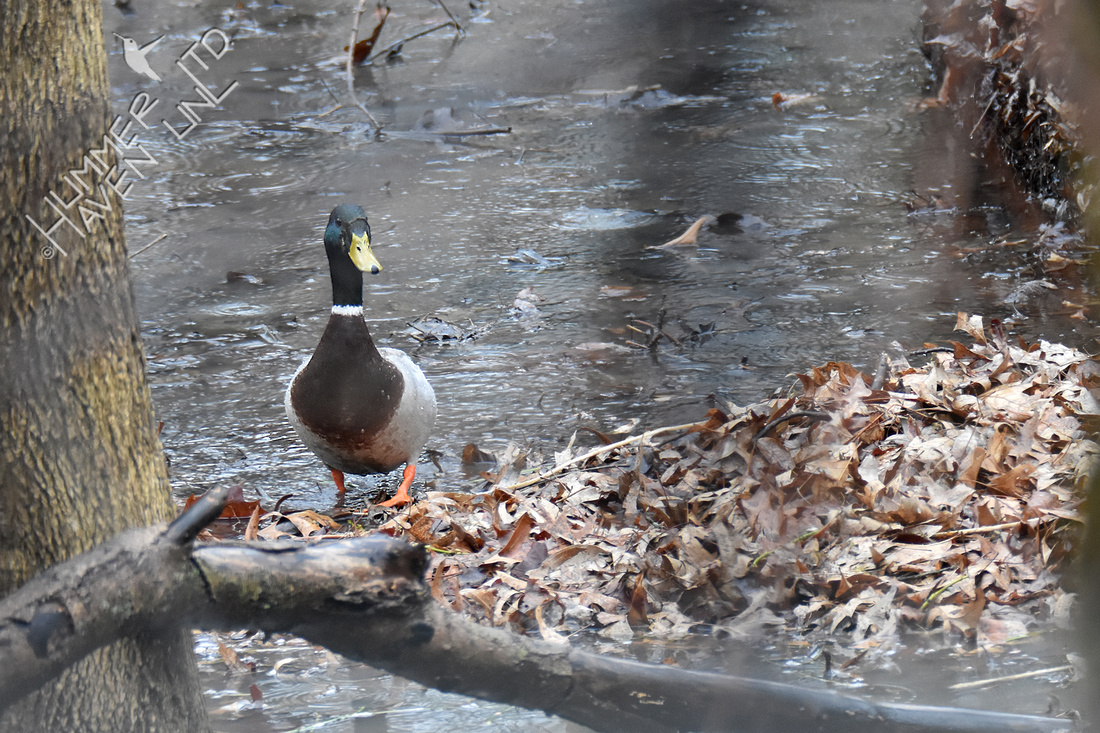 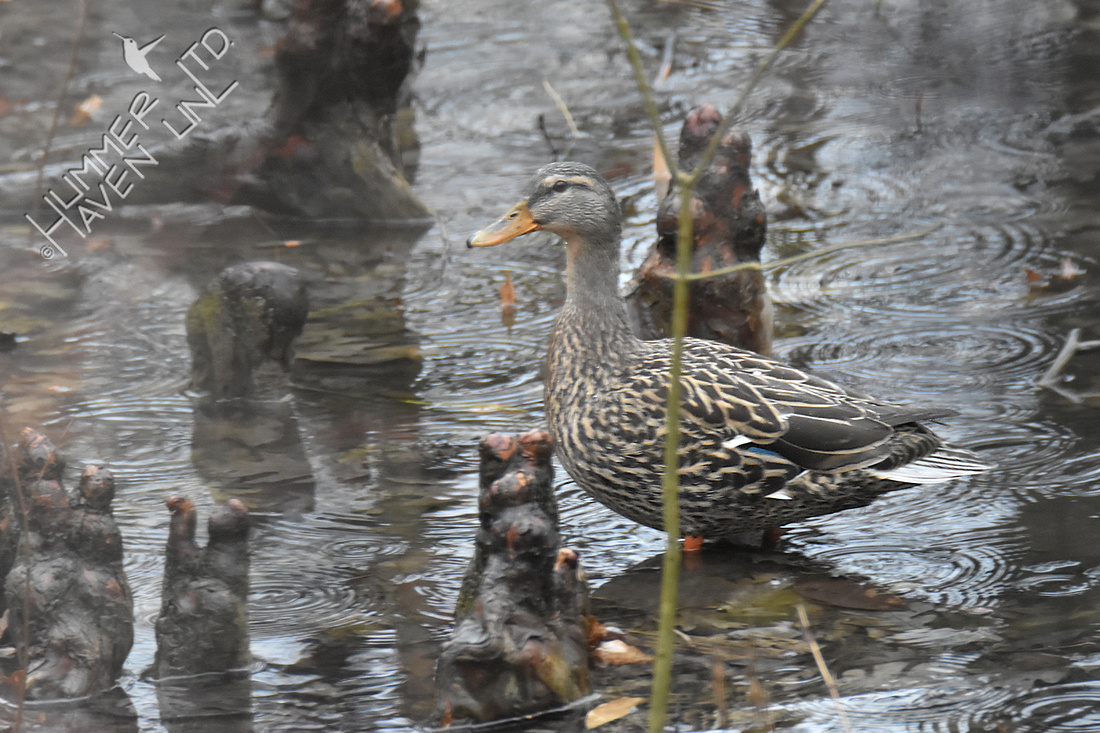 Early the next morning, a deer was checking out the bubbler area. Our two grandsons giggled with this one!

Later in the morning, I thought I saw an Eastern Bluebird again, diving down into the leaves for an insect. When I came back with the camera, I couldn't find the male but there was a female high in one of the sugar maples. 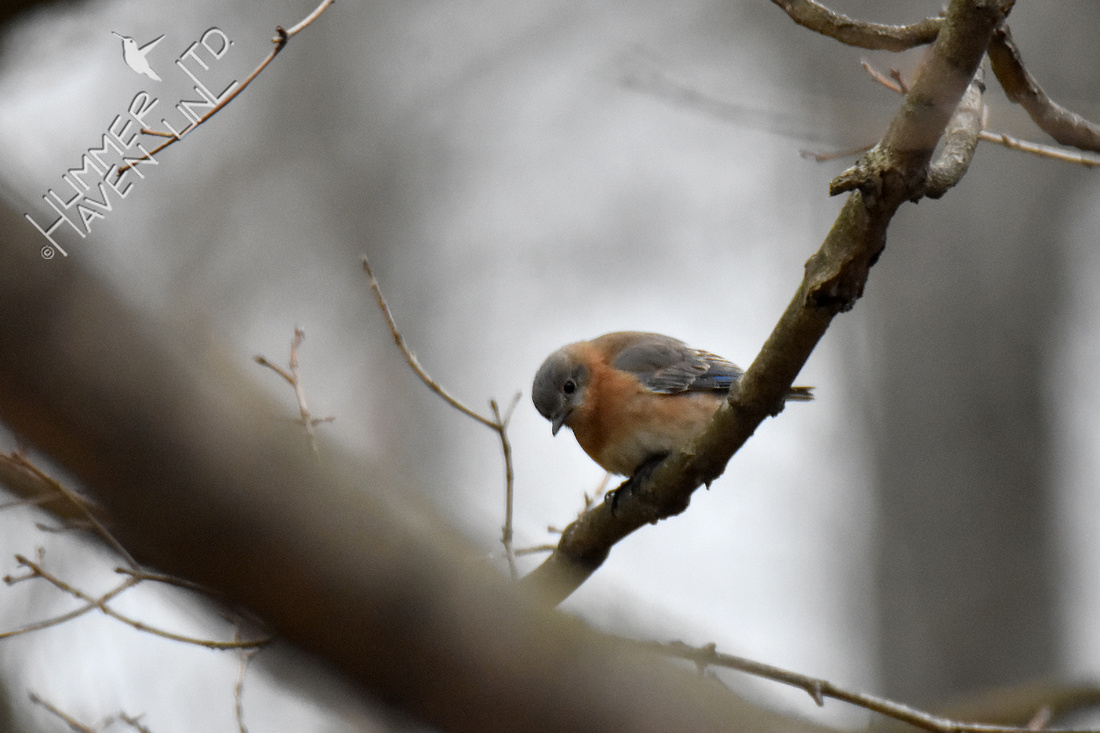 Last year we thought about putting up a nest box, but we have concerns with other species taking over them in our fairly wooded space. I asked Dan if we should reconsider giving it a try. Dan was on it! We looked up plans online and he came up with enough cedar from other projects. He made a slightly altered version of a Gilwood box, giving it a thicker roof with a bit of a slant. 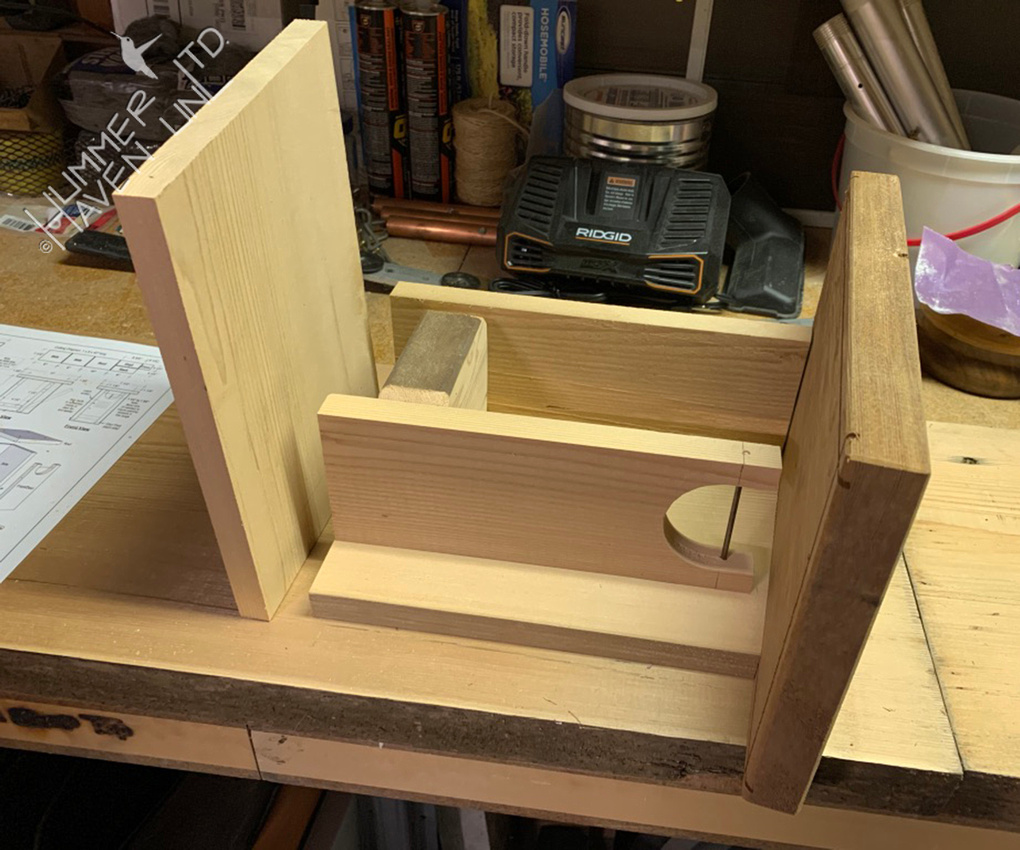 Dan enjoyed the challenge and we both relished having an idea to focus on that was positive, helping another native bird species right in our own yard. It will take some luck and careful monitoring. We are novices at this! We had two places in mind and are trying it in the garden first. We just aren't sure if this area will be open enough for them. Stay tuned for updates! 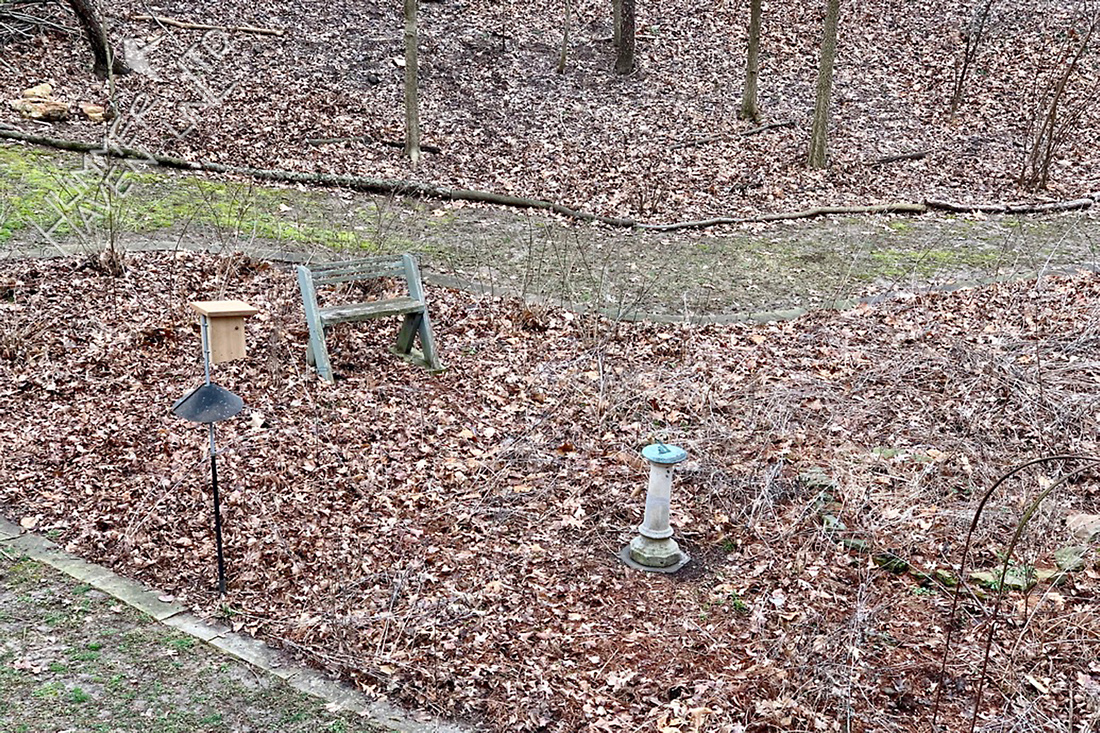 One of the Carolina wrens was foraging in the leaves, near some emerging Virginia bluebells (Mertensia virginica). A hairy woodpecker came in to get some bark butter and look for insects in a small oak. That delicate white feathering around the eyes makes me think of a harlequin. 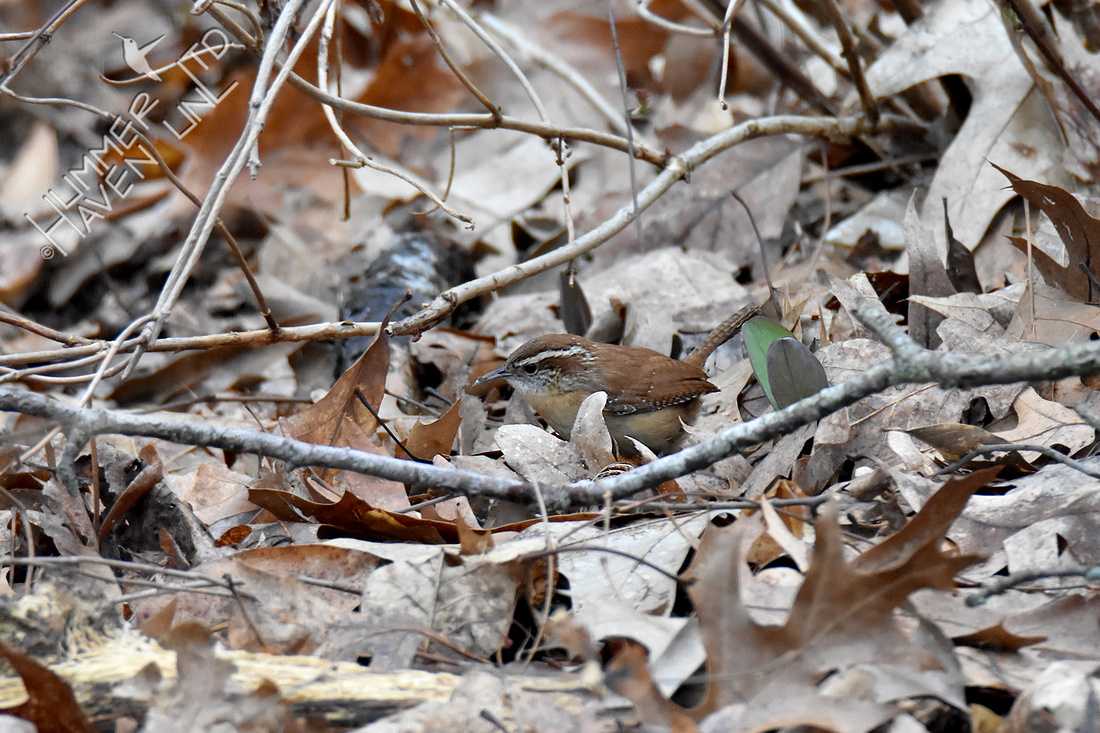 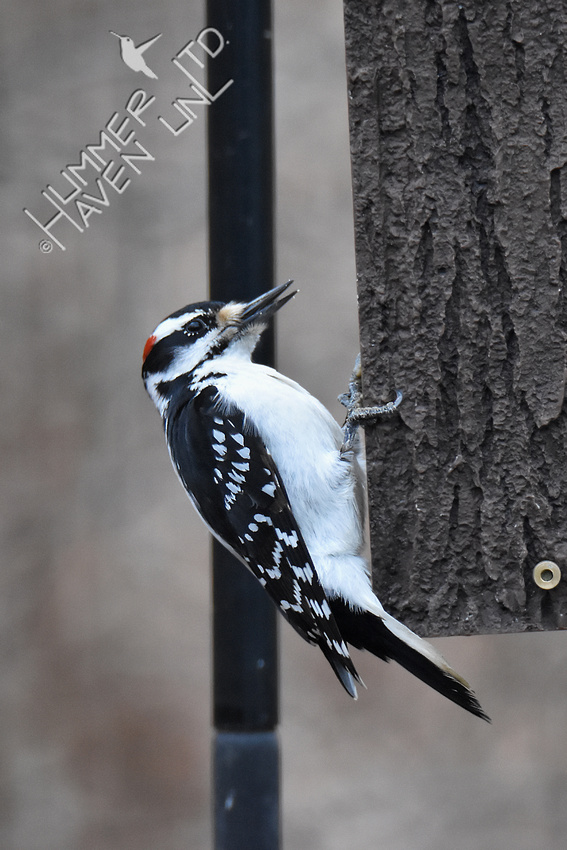 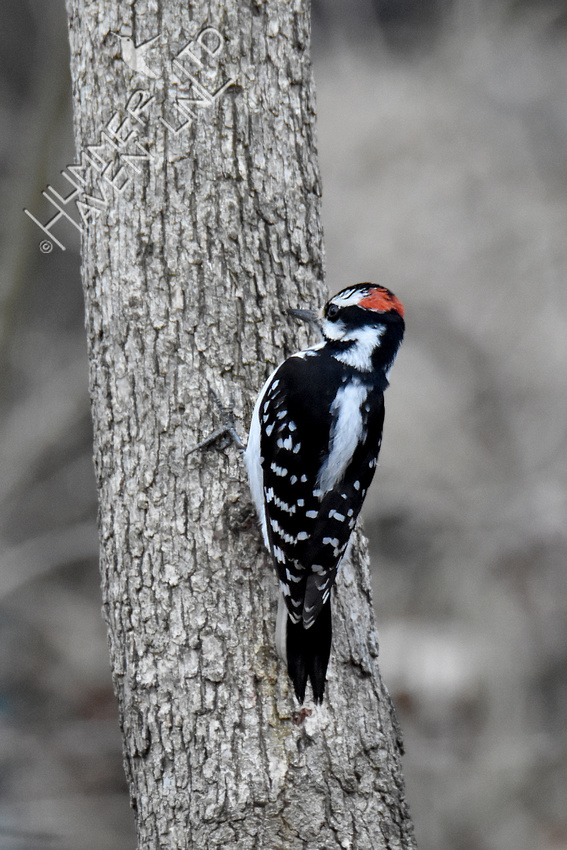 A Carolina chickadee got a quick bath and a downy woodpecker came to the basin to get a sip of water. 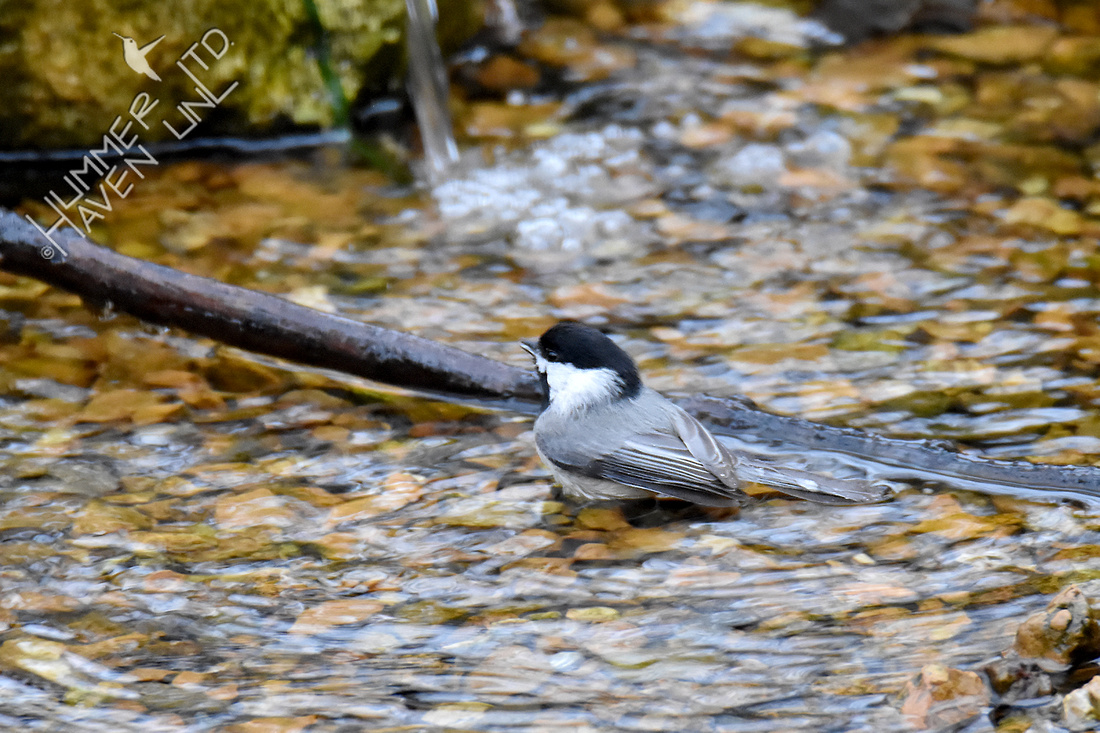 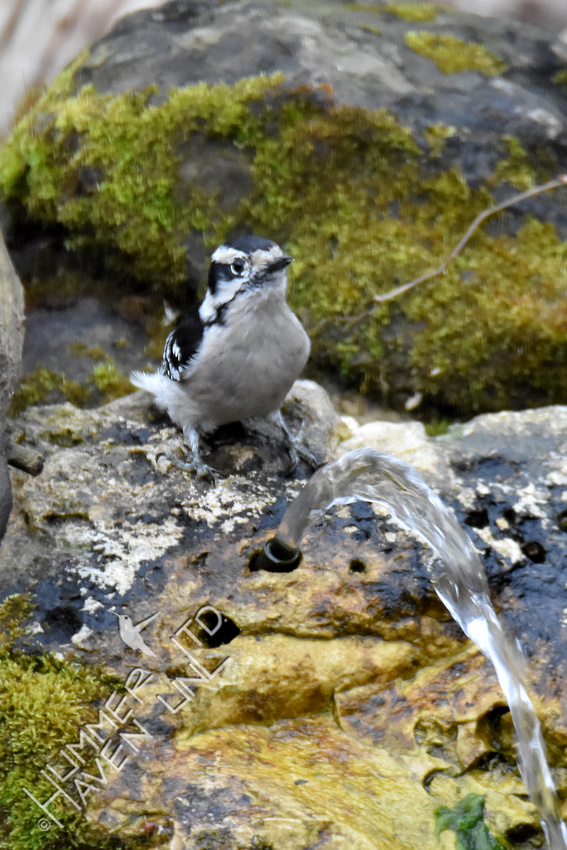 St. Patrick's day was pretty cool to start, then warmed up enough to work in the garden. My first task was to pull some emerging wintercreeper euonymous (Euonymous fortunei), on the left with obovate leaves, and bush honeysuckle (Lonicera maackii), in the upper right corner. The usually high, dry areas were nice and moist from earlier rains, just perfect conditions to get 'em now, roots and all. After years spent removing these invasive plants, they continue to try and take hold, so we make the effort to get on top of it early in the spring. 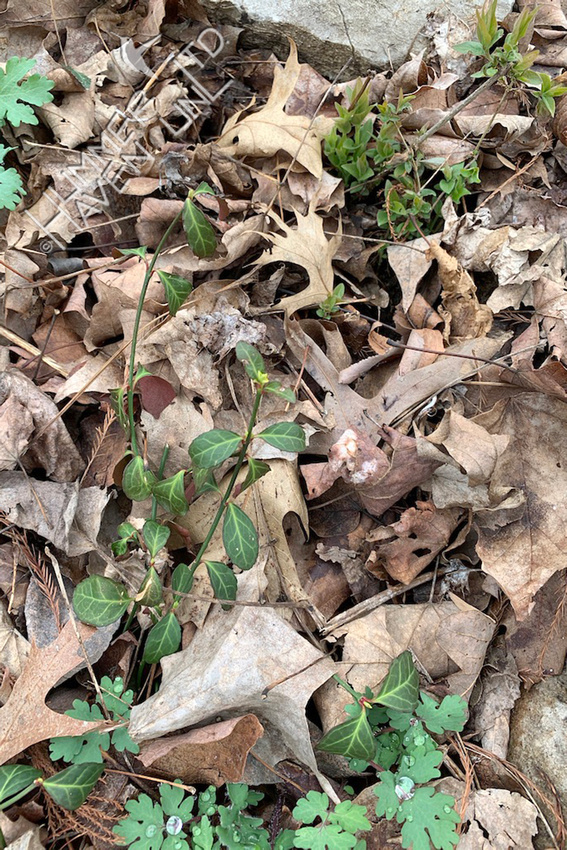 We have 80% native plants here now. The 20% that are non-native function in different ways in our garden. We enjoy the Lenten roses (Helleborus orientalis) for their very early blooms in shades of purplish-pink to soft white. They spread slowly, and not invasively. 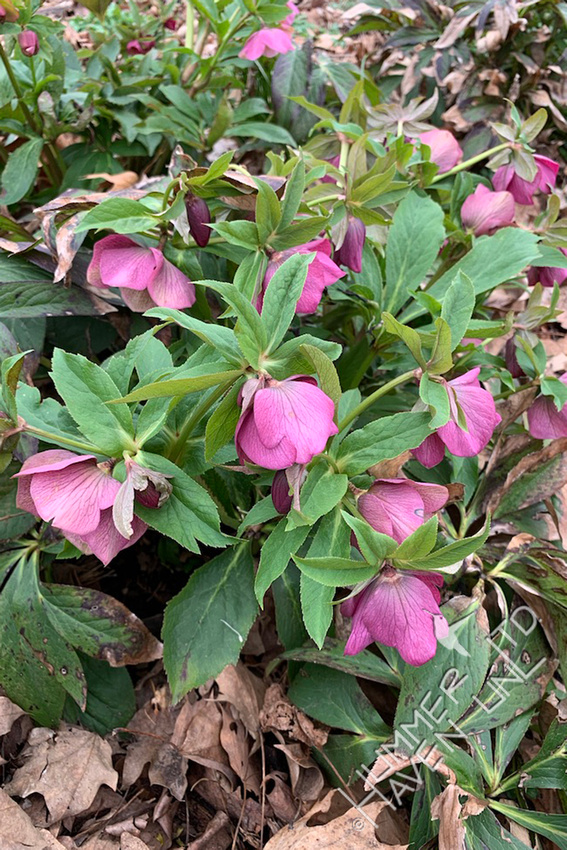 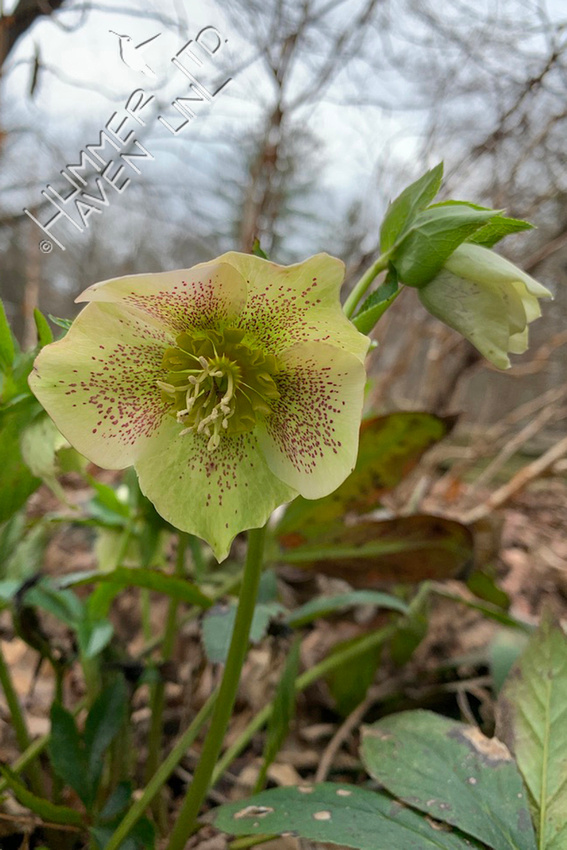 However, I'm really looking forward to the April blooms of the native Red Buckeye (Aesculus pavia), which are in bud now. Maybe this year, the timing will coincide and I'll catch a hummingbird getting nectar from the flowers. 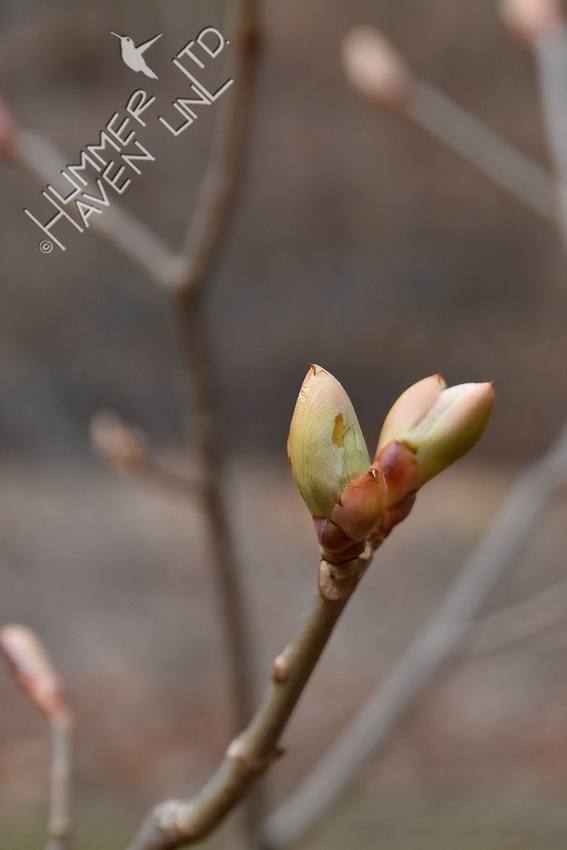 Back to birds, it seems the Carolina wrens have given up the nest site to the Eastern phoebes. I think they must have a new spot, the male was just singing his little heart out yesterday! What a joyful song. 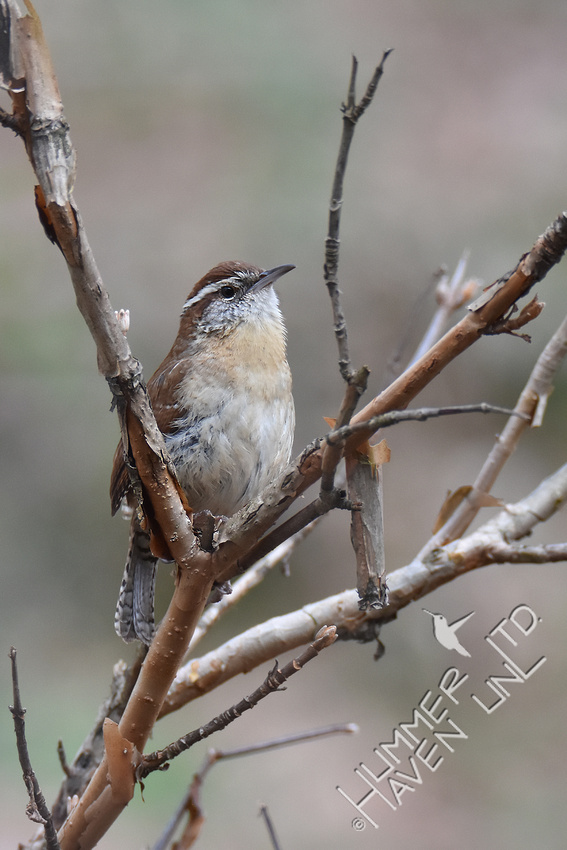 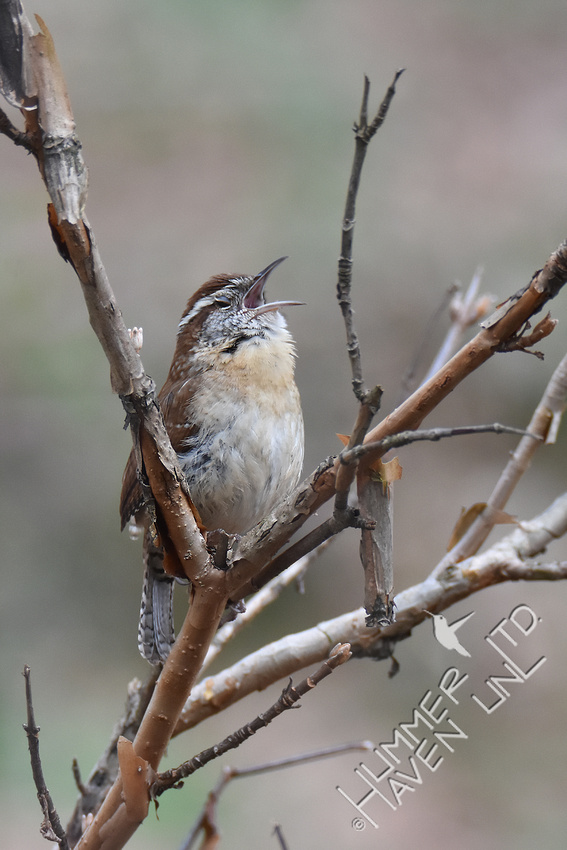 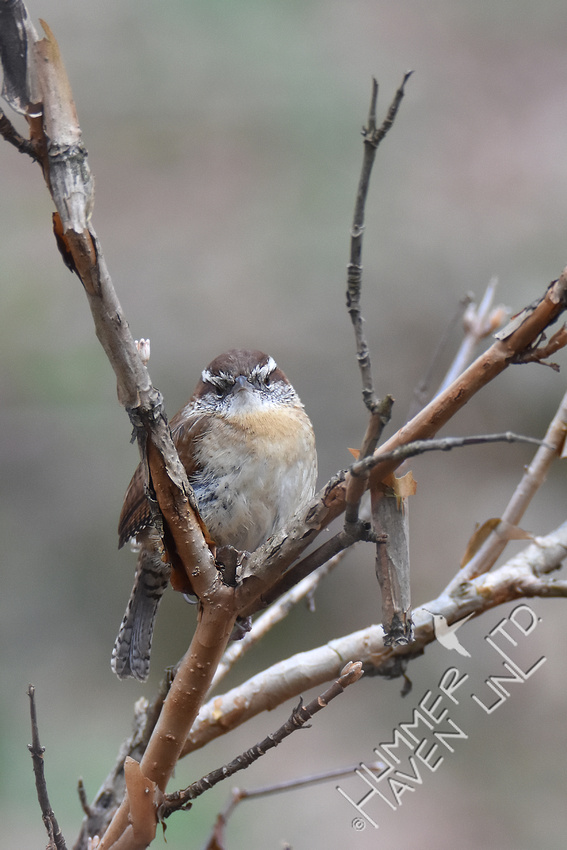 The Northern cardinals were caught sharing a tidbit, a behavior called 'pair-bonding'. It's another promise of spring, cementing their relationship for this imminent, busy time of breeding, protecting their territory and caring for young. 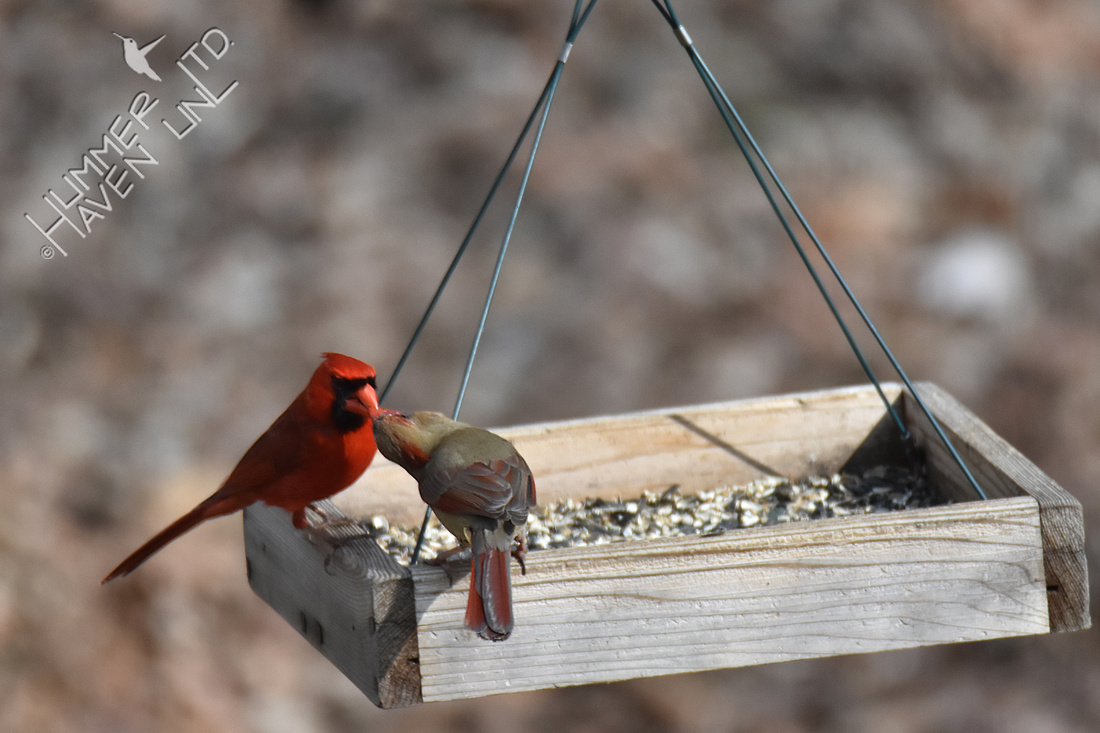 Last but not least, a short clip from the Bubbler cam to view. This critter does something that we humans are now doing a lot right now... but I don't think this raccoon has sung two verses!

Life is precious, take care and take time to be outside!