Spring itself is a hopeful time, and it sure seems like we all need to reach deep within right now to stay in that positive, forward-moving lane of life. Just one week ago, Dan and I were very involved in the Partners for Native Landscaping events here in town. So much enthusiasm on display, such wonderful opportunities to hear positive thoughts and learn even more about conservation in our own yards from the most persuasive wildlife ecologist and author in the country today, Doug Tallamy. The speakers that followed him on Saturday were also brimming with excitement about new methods and new approaches to fulfill our collective proprietary goals of gardening for birds and wildlife, and thus supporting life in our local ecosystems. After all, as Doug says:

"To save life on earth, we need to preserve functional ecosystems everywhere! So, save it where you live!"

It is time to jump in on this conservation approach, every single one of us is needed! Do check out his newest book, Nature's Best Hope.

I will continue to do my utmost to document and share with you, my friends, the wonderful interactions we see in our own

Shady Oaks Conservation Garden. The resiliency of Nature is our ultimate inspiration!

Let's begin with a surprising new visitor to the yard on 2/26/20, just as it began to snow. Yes, our first ever skunk. It kept on going, we have not seen (or smelled) it since. But, if you'd like to read more about this misunderstood critter, check this out:  Skunk

Eastern bluebirds have been coming in, calling to each other and looking for insects in the leaves. What a brilliant blue coat the males wear! The most sustainable practice now is to leave the leaves in the garden beds so bluebirds and others will find plenty of insects to eat! Here's a look at the bird and butterfly garden and surrounding beds on 3/1/20. 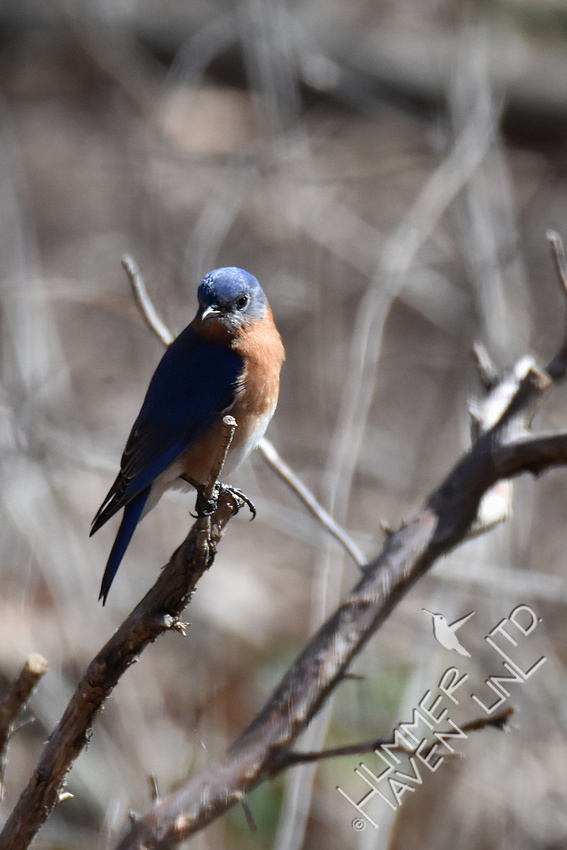 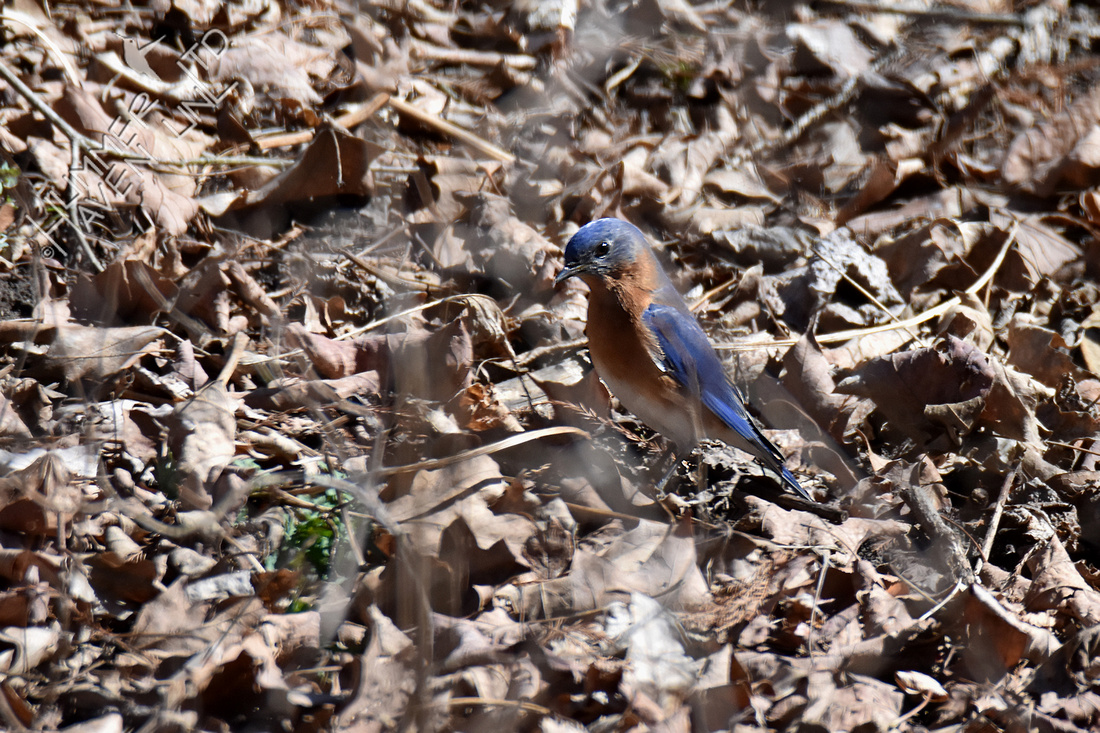 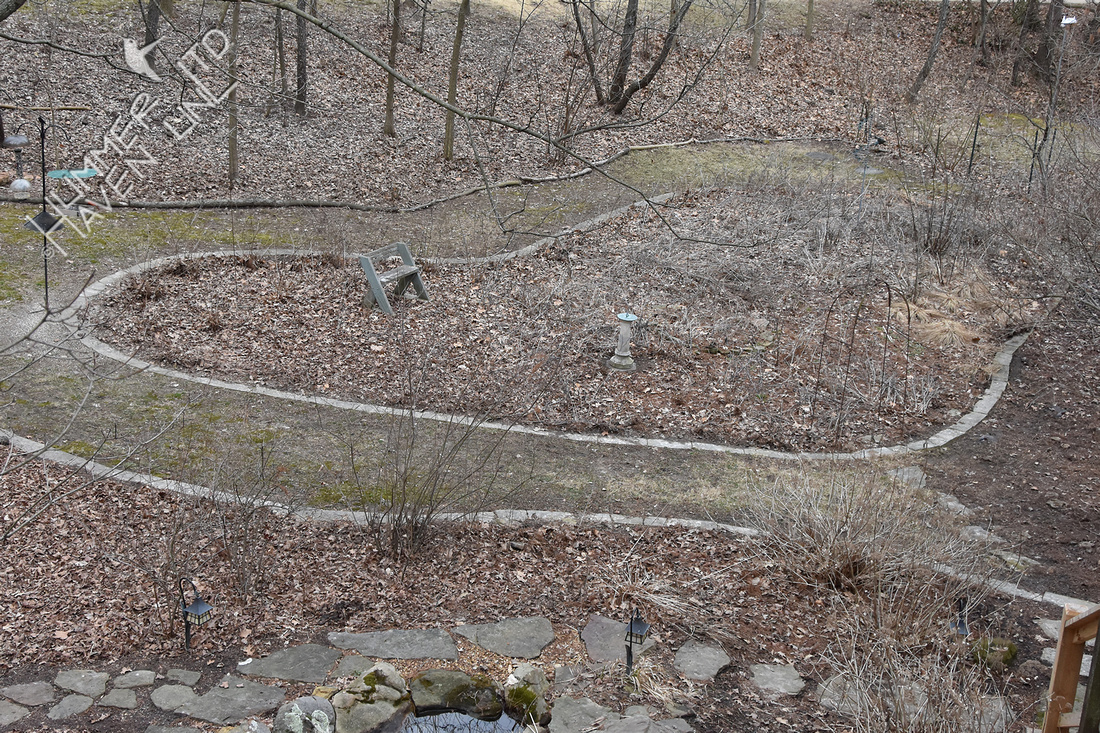 On Friday, 3/6/20, something was moving in the shade near the pond, one of the Carolina wrens gathering nesting material. I wondered where the pair was building a nest this year?. 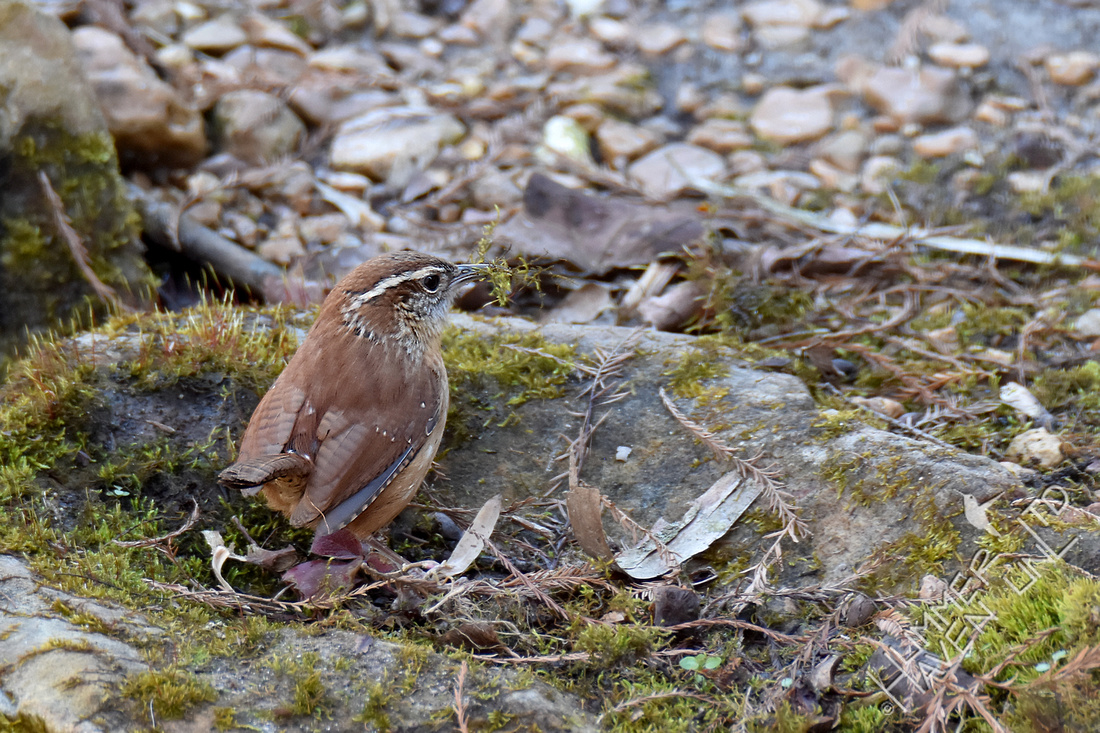 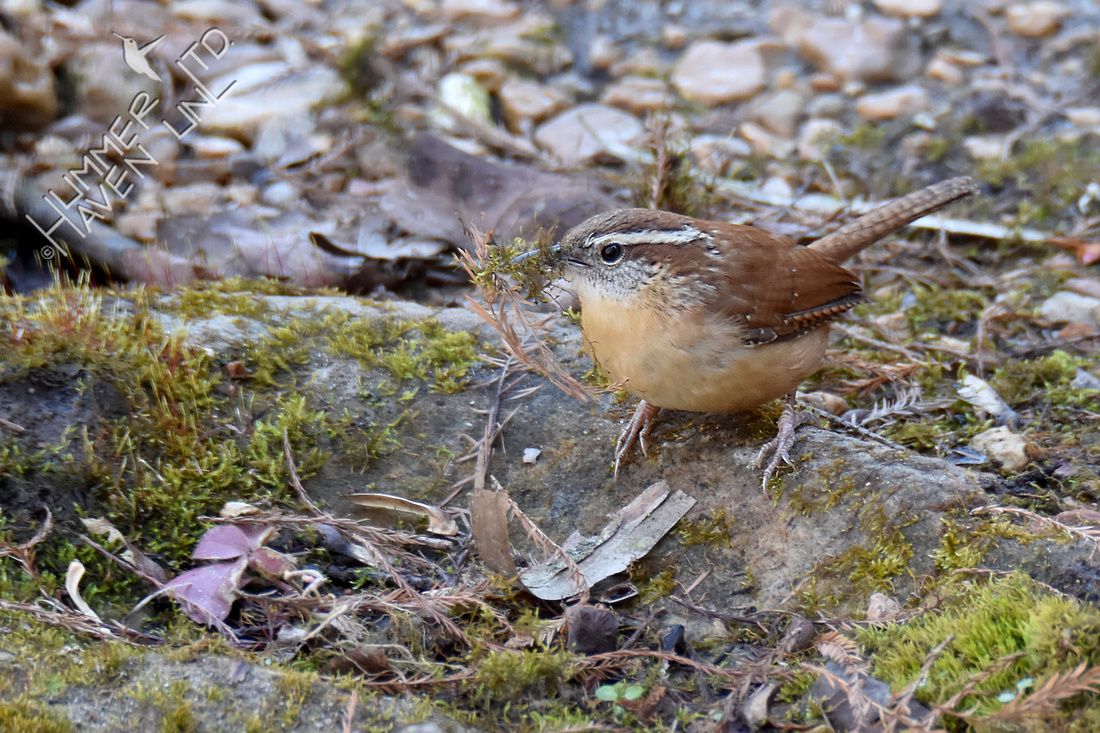 The answer would soon be revealed. The little wren sure was busy, returning frequently to the same spot, collecting lots of soft green moss. 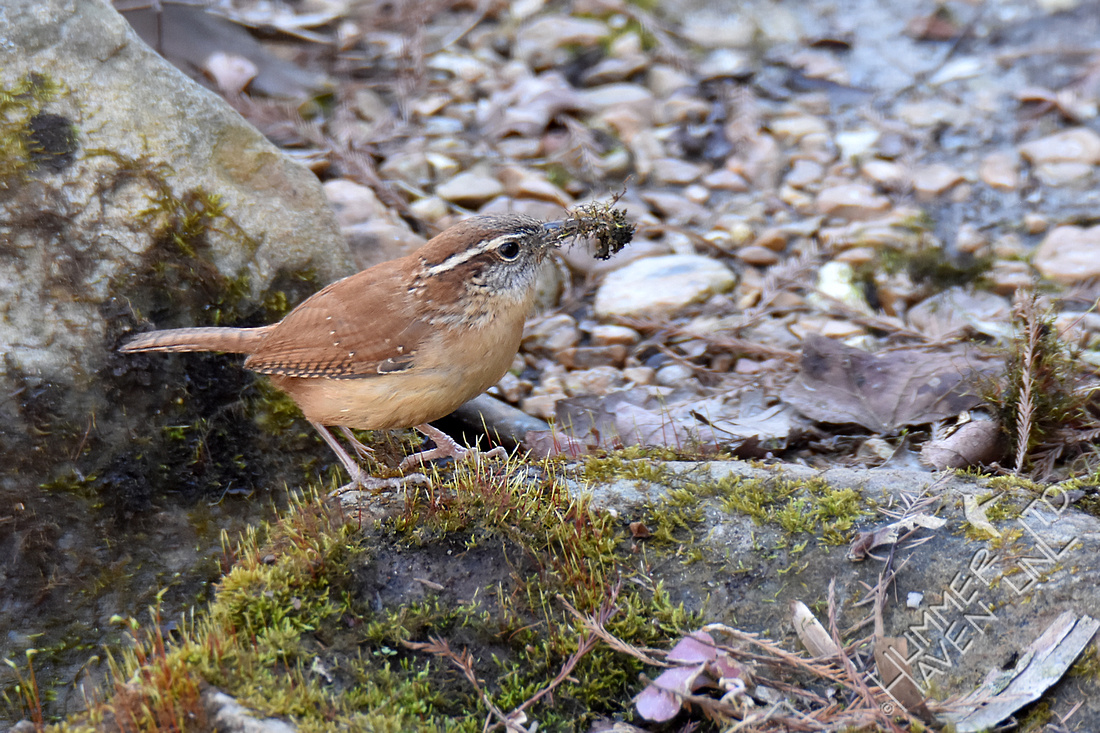 The brown creepers are still visiting some days, and I caught this one as it took off, revealing the pattern in its wings. 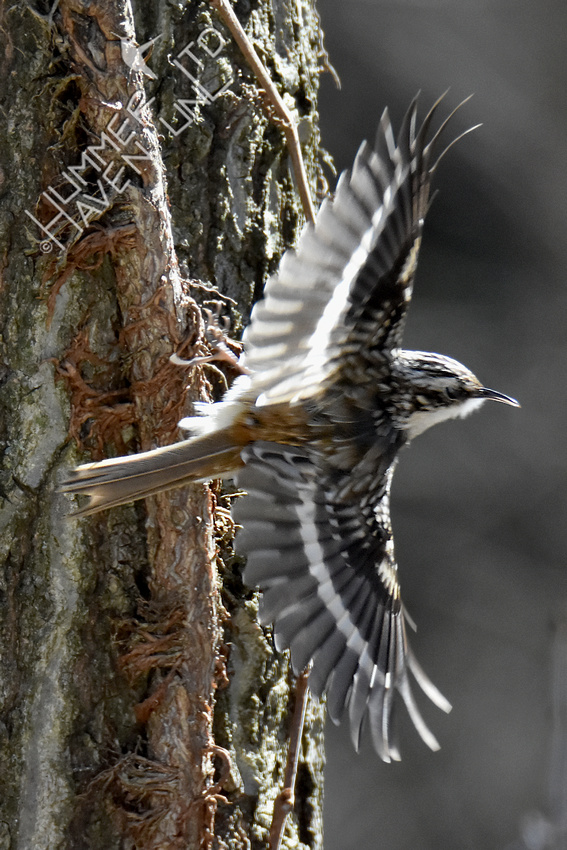 On 3/8/20, as I sat down with my favorite mug full of coffee, I heard a familiar call. Are they back already, 11 days earlier than last year? YES! The Eastern phoebe pair was chattering noisily, checking out their nest site from last year, under the gazebo. They are species #39 for the year. 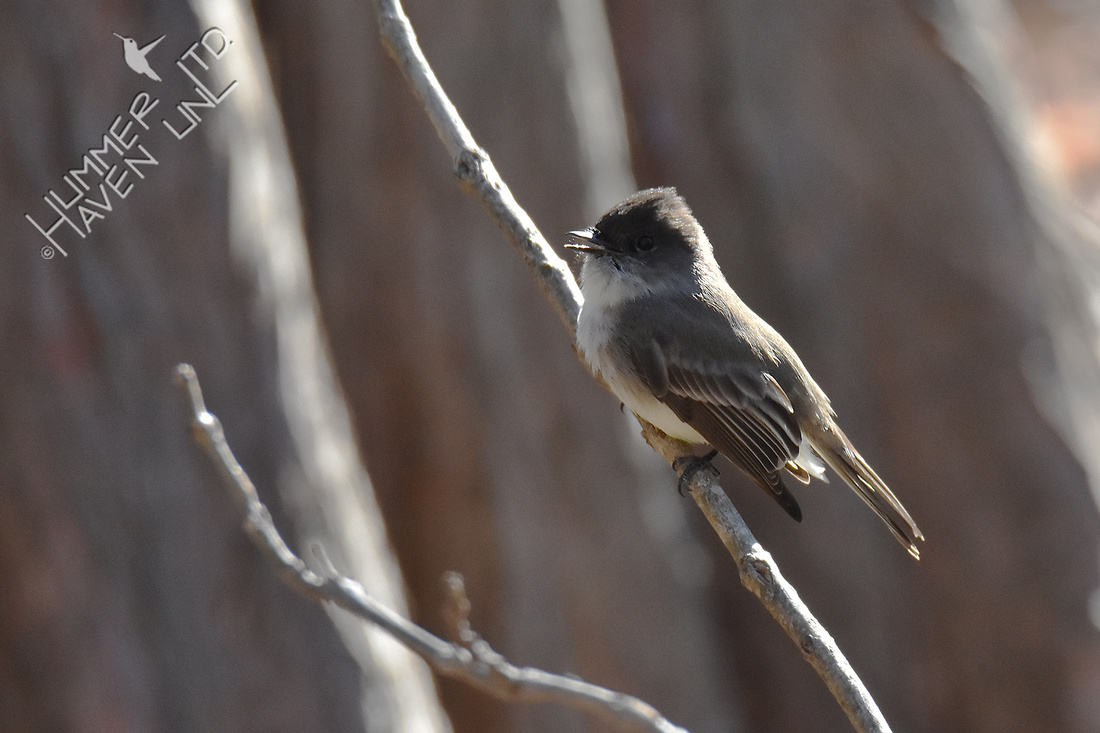 It was a bright, cool morning and birds became more active as the day warmed. The female Red-shouldered Hawk was perched in the sugar maple overlooking the pond. A Cooper's hawk flew in and landed on the tall white oak snag, followed by a noisy American crow. The Red-shouldered hawk flew over to the top of the same snag and began calling to her mate. The other two birds had flown off by the time I got outside to document what was going on. The male came in, the pair copulated and the male flew off into a nearby oak. Another sign of spring and the promise of life to come! 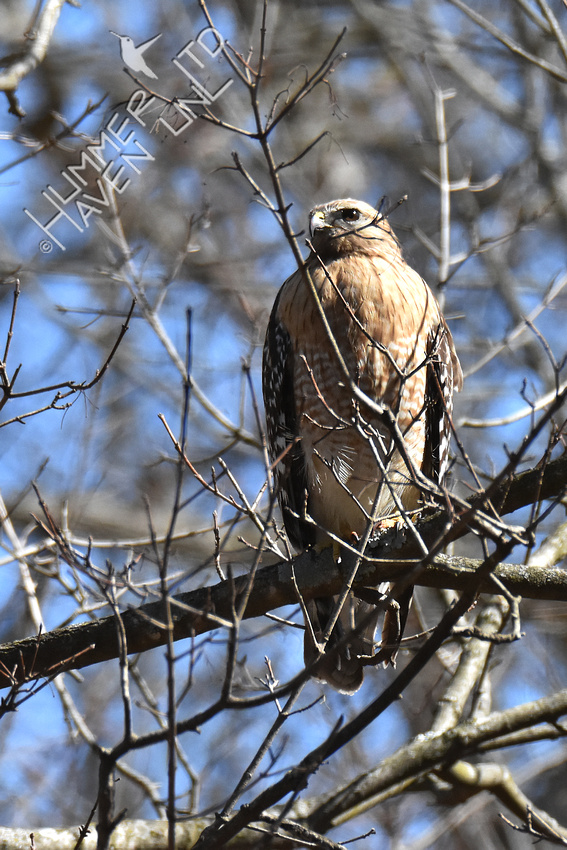 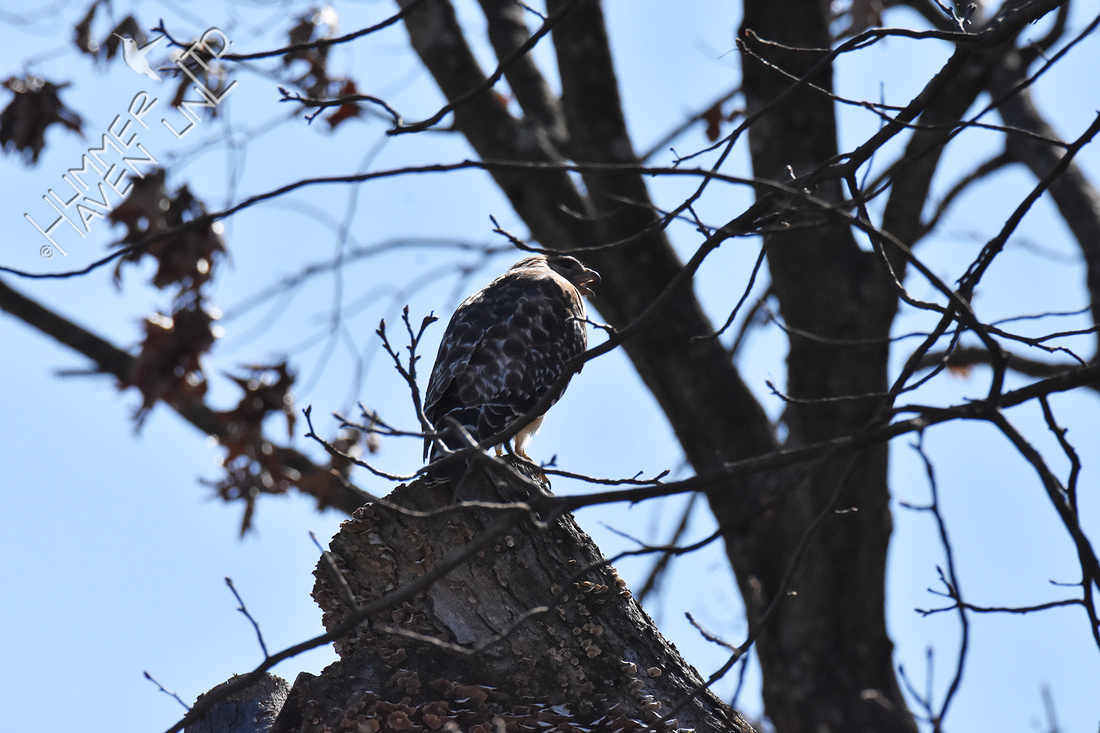 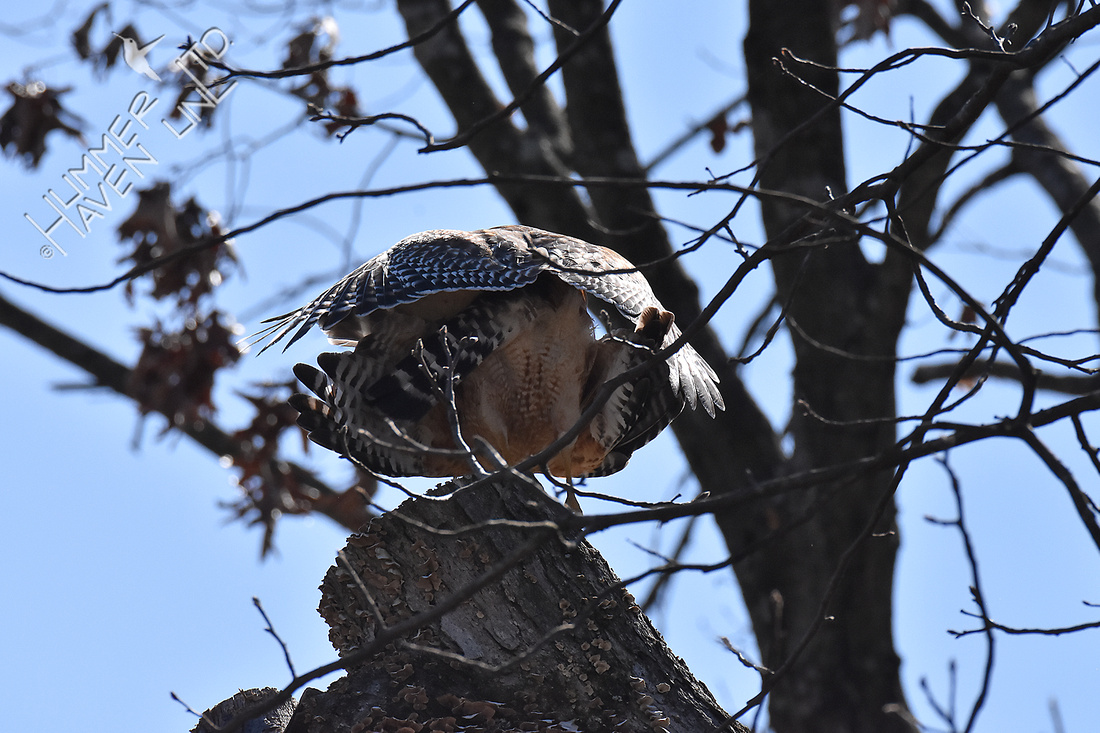 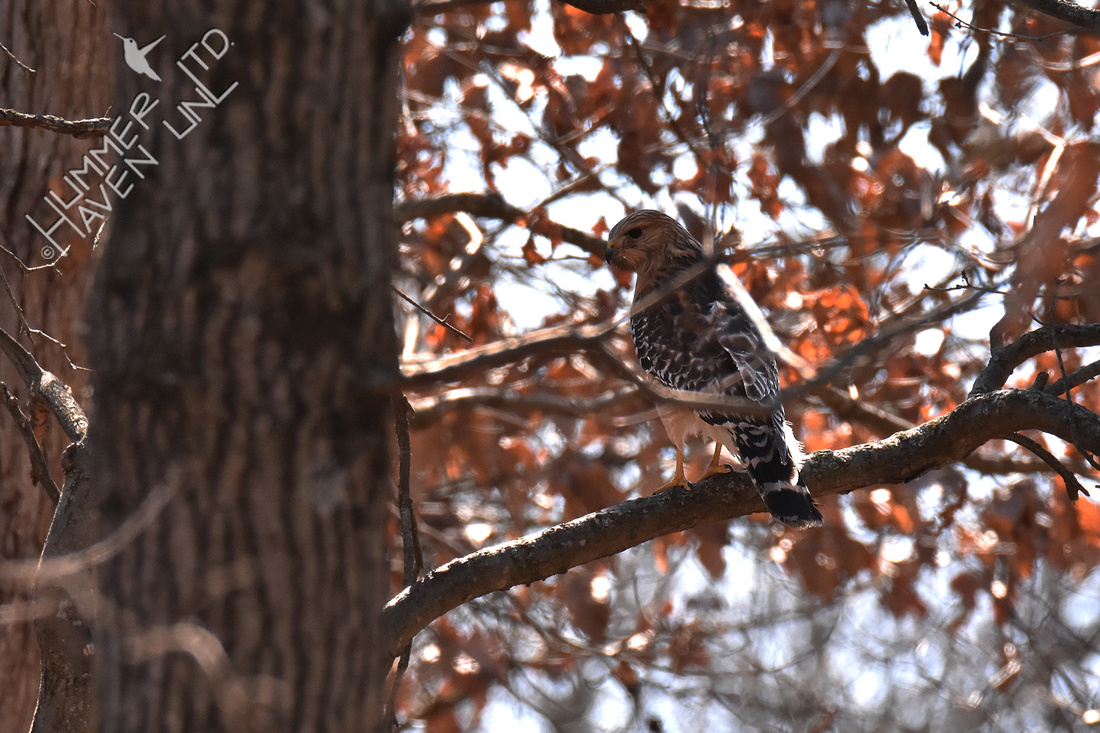 Shortly after this interaction, I walked down the steps to check out the Eastern phoebes' old nest site. Aha. Well, this was going to get more interesting, indeed! The Carolina wrens have been building their nest right on top of the phoebes'. Oh, dear... 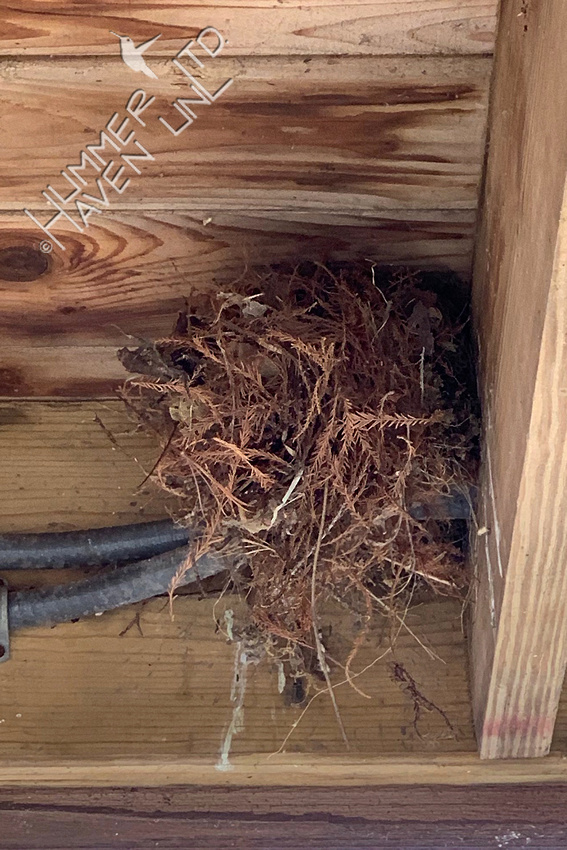 The next morning was quite gray and the female opossum was active in the woodland. (From the right angle, I could tell it was a female.) 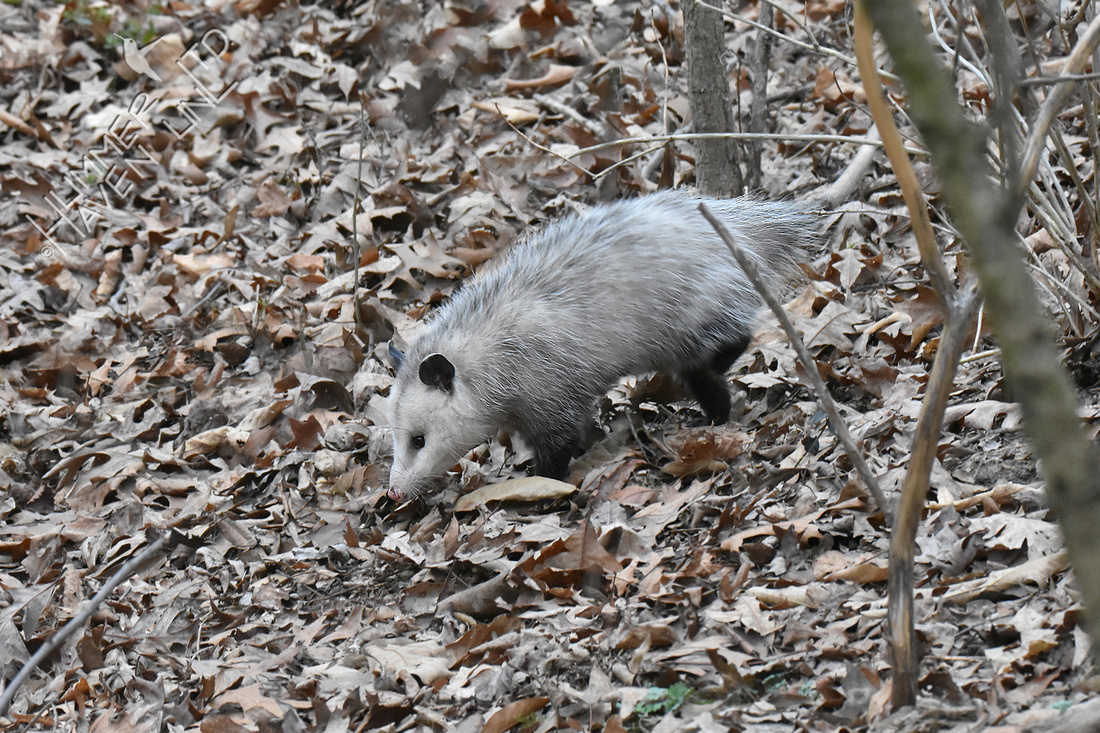 The Eastern phoebes are still around, undeterred by the obstruction of the wrens' nest. They flutter around underneath the site. One of the wrens was still carrying in nesting material on 3/9/20. I really don't know if the female wren is inside the nest on eggs yet or not. Inquiring minds need to know but all will be revealed at some point. 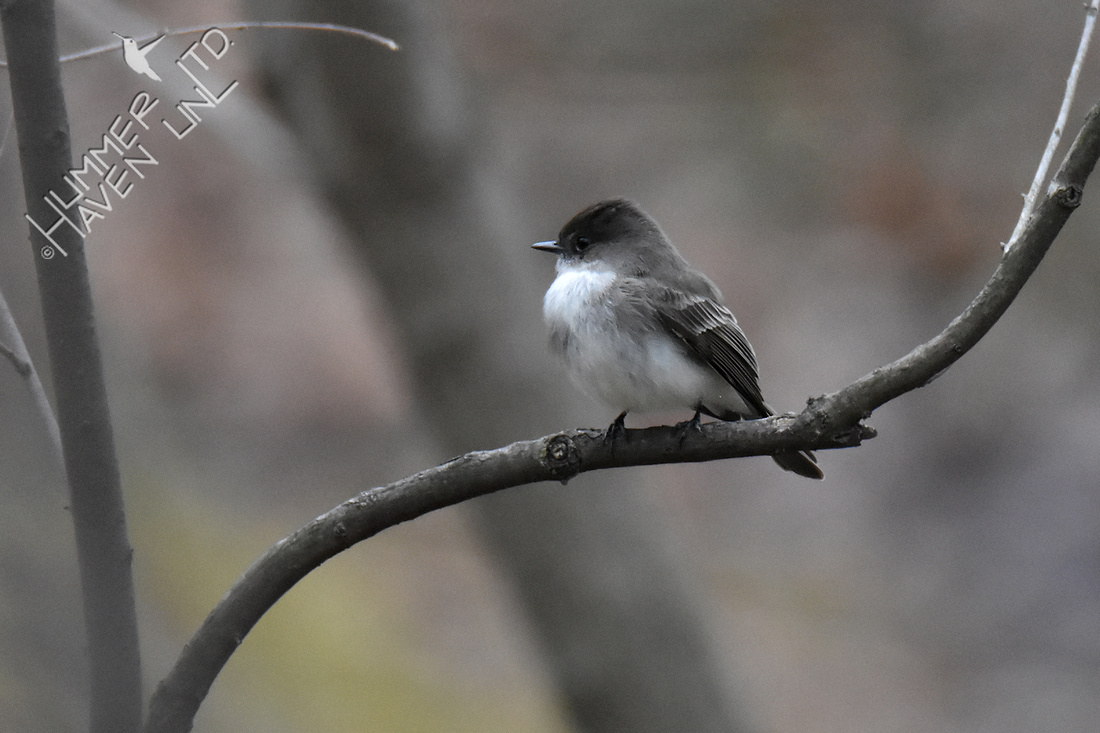 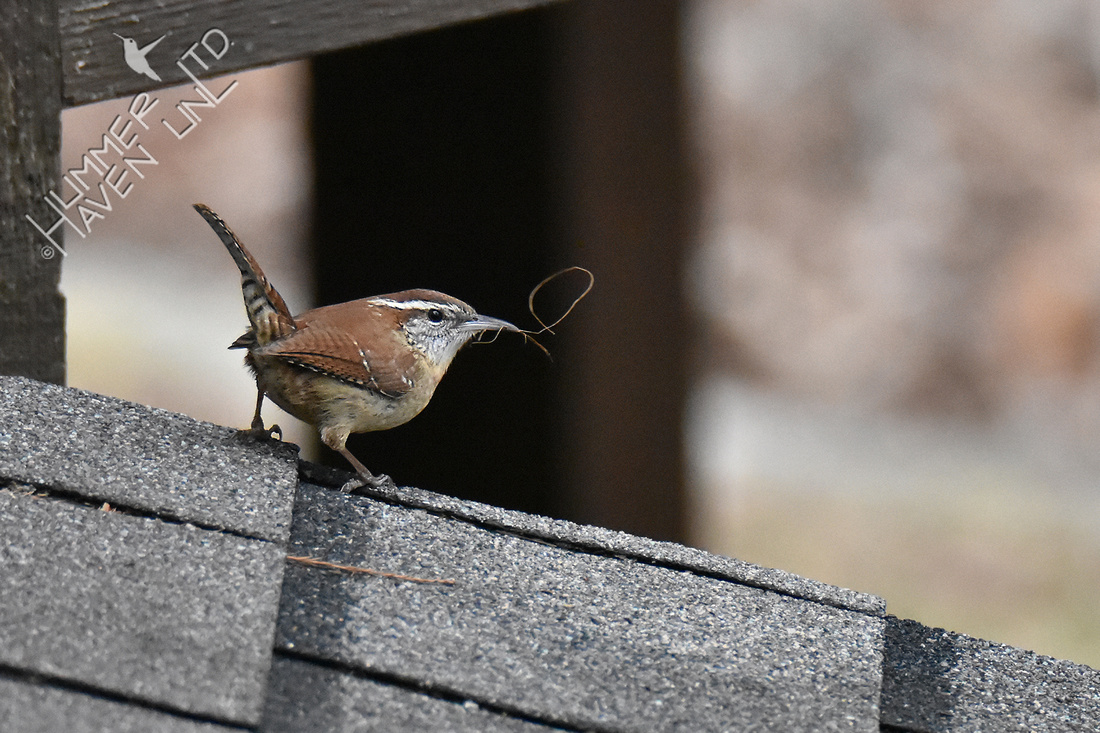 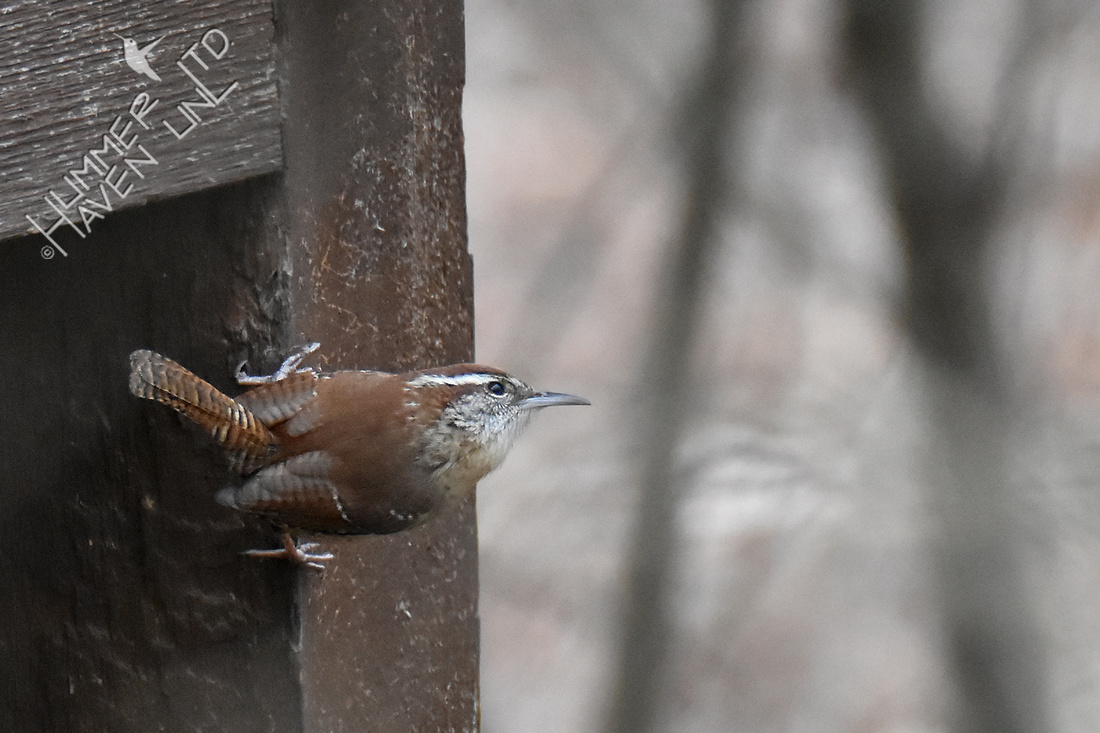 The bubbler had yet another visitor on 3/10/20, early in the morning. We had a clip from January that showed a scrawny coyote, but this animal  looked quite robust. Two short clips are here for you to view.

This morning I took 2 photos, but I still have no clue as to what is going on. I'll leave them be, as 'least disturbance' is our motto here!

UPDATE - I studied the photos and realized there is much more mud in and around the nest. It looks more like the phoebes are taking over! 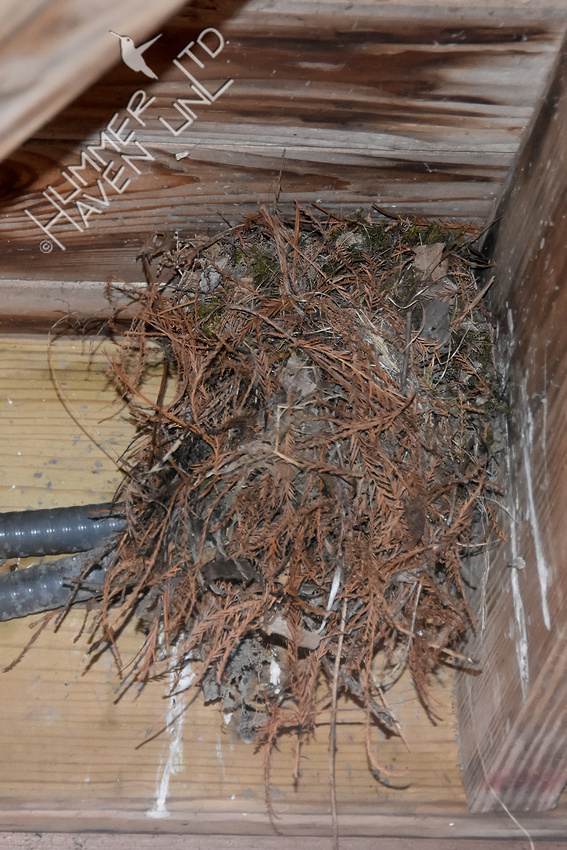 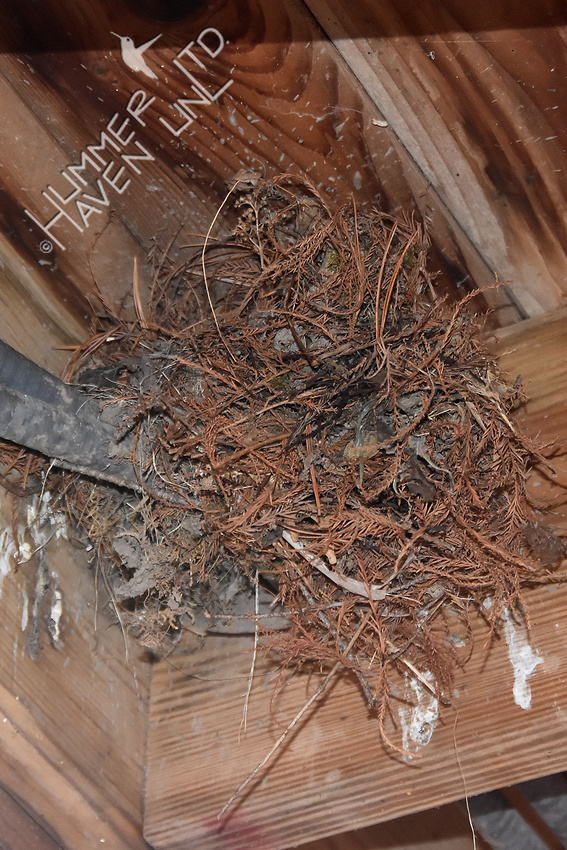 Last but not least, Virginia bluebells (Mertensia virginica) are emerging.

We will weather this current COVID-19 crisis in due time. 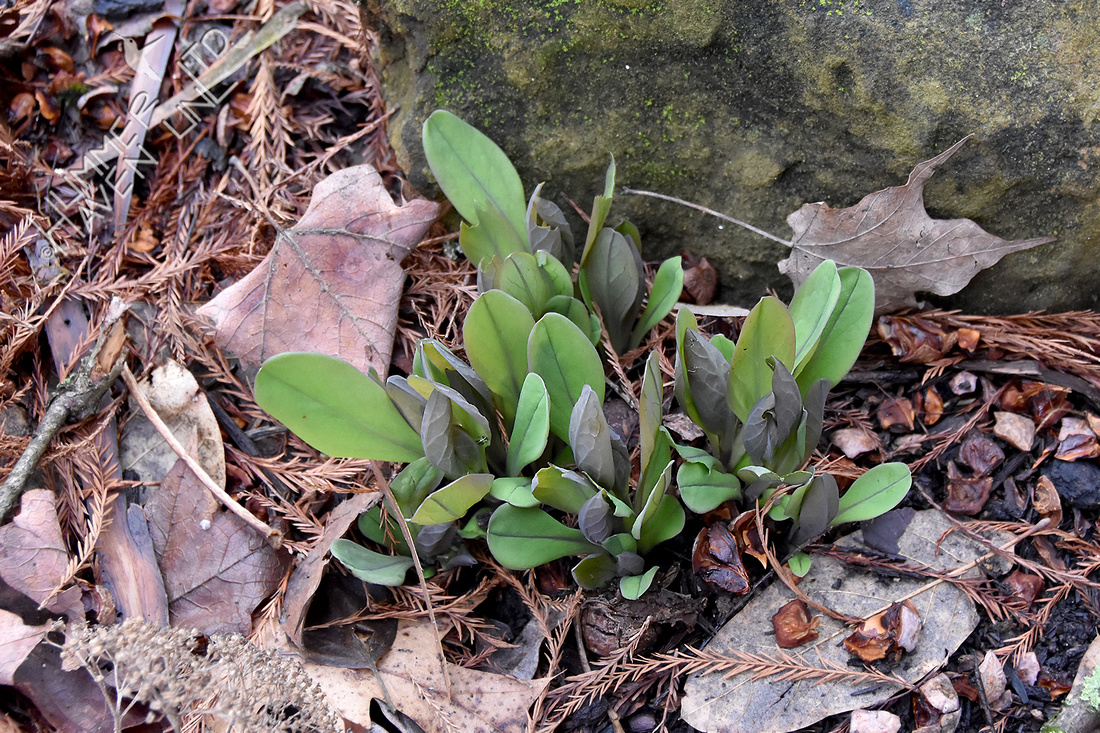