The garden has been looking so lush with all the rains this month. The Copper Iris (Iris fulva) were in full glory over Memorial Day weekend. This iris is native to Missouri. 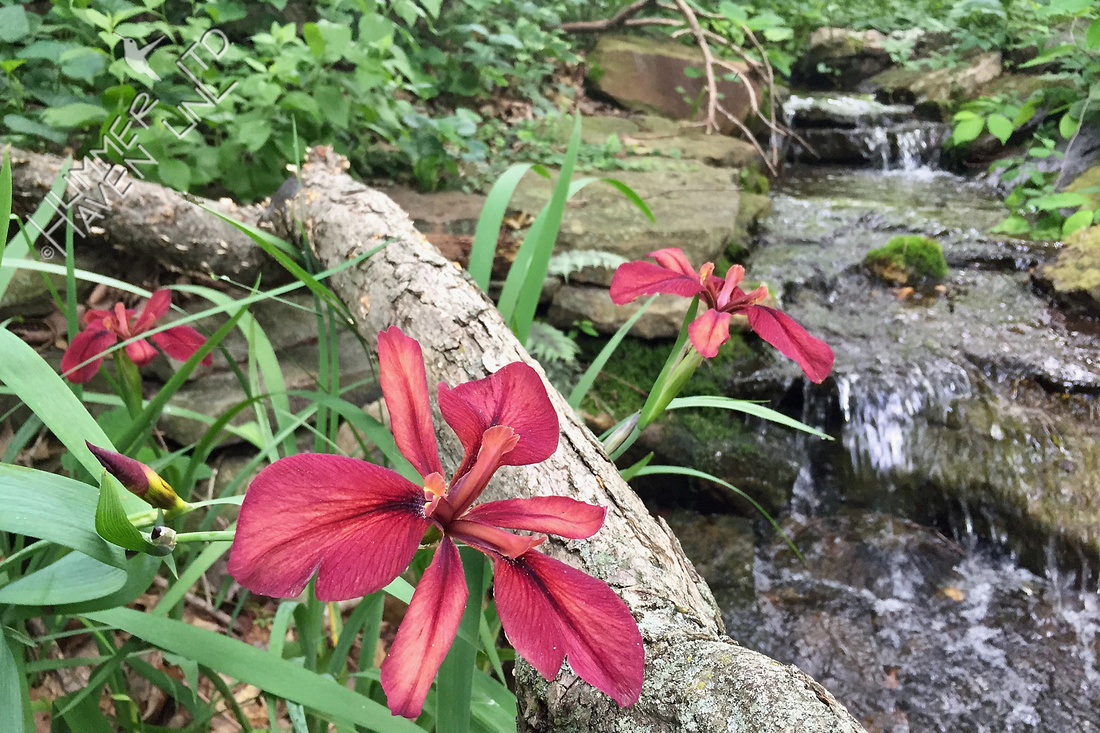 The Coral Trumpet Honeysuckle (Lonicera sempervirens) has been blooming most of the month and we frequently see the Ruby-throats taking sips of nectar. The dominant Northern Cardinal pair built their nest in the arbor, under the protection of this twiggy vine. 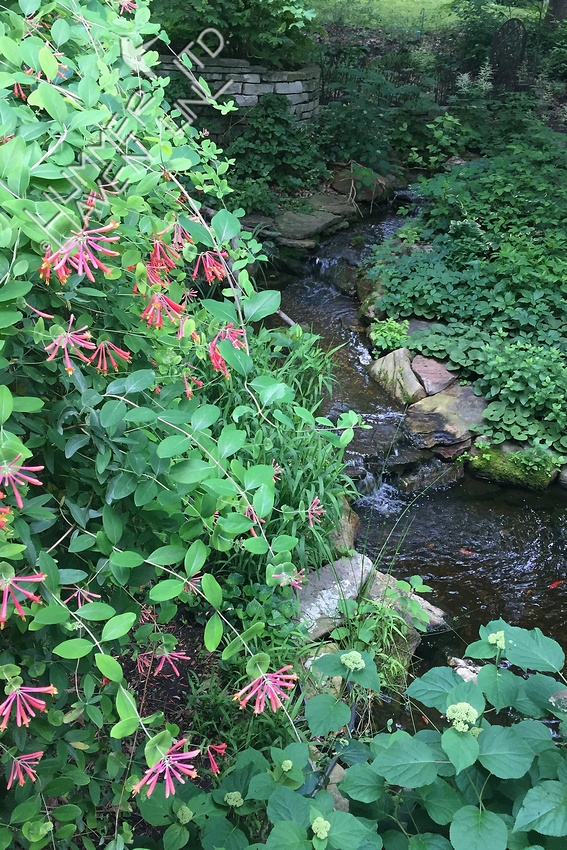 Above the 'spring' the Goatsbeard (Aruncus dioicus) is now blooming. Its graceful plumes look better than ever this year. On Thursday, I went to feed the fish and was taken by surprise by a deep purple flower. My friend, Judy Speck had given me this iris four years ago and it was finally happily blooming! 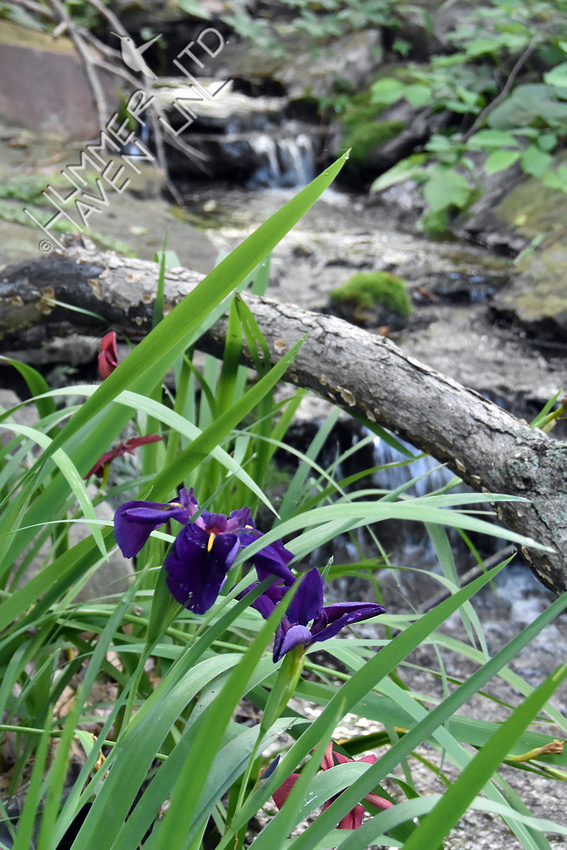 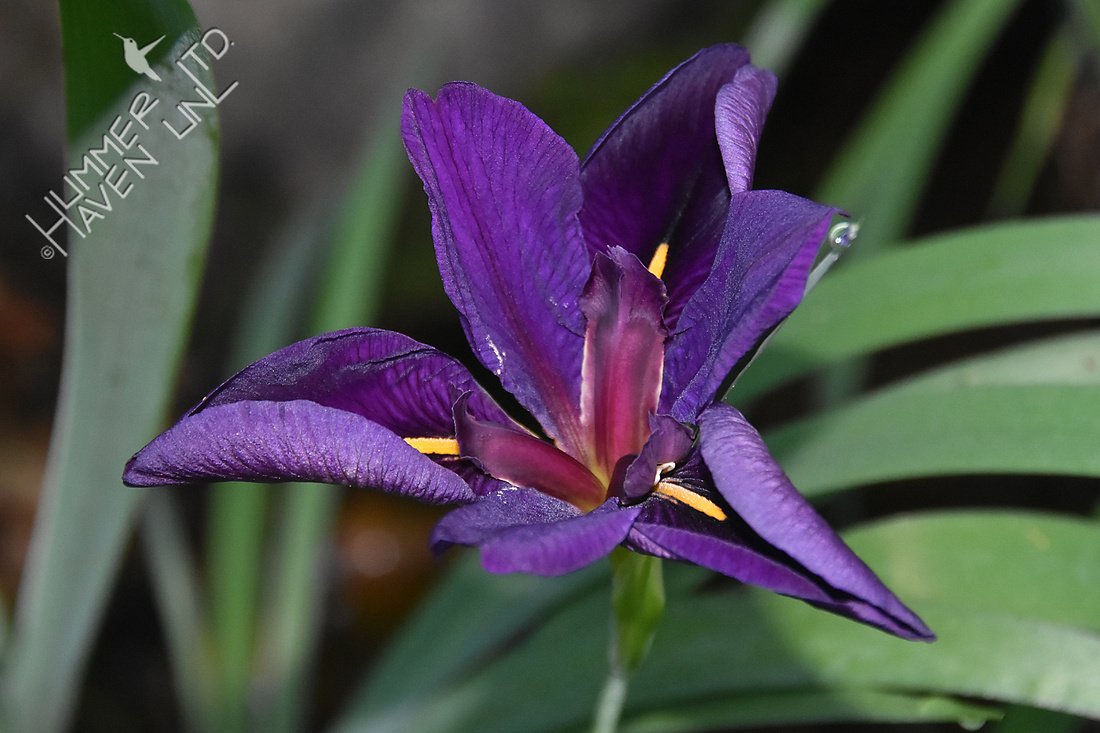 It is a hybrid native iris, called Iris Louisiana 'Black Gamecock'. These native irises will only cross with each other. There are five irises in this group, one being the Copper Iris (Iris fulva), known for its deep and lovely orangey-red hue.

Here is an information sheet on these irises:  Louisiana Irises

Another favorite plant that is native to SE Missouri is the Indian Pink (Spigelia marilandica). It has been really happy near the pond. 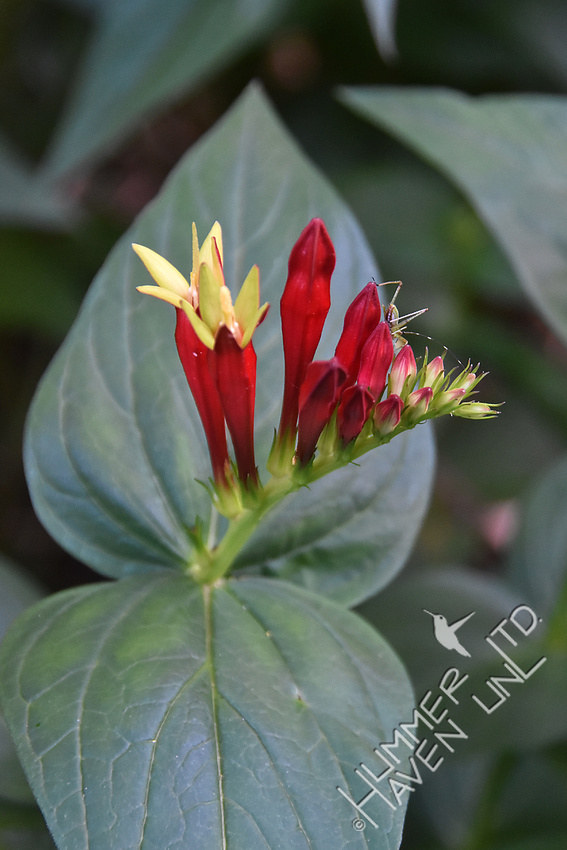 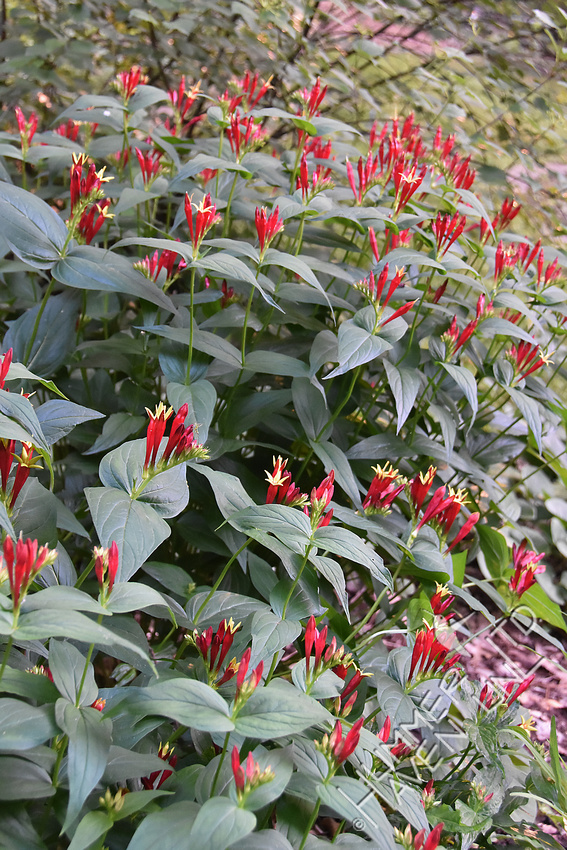 Another plant that is doing exceptionally well this year is the Virginia Sweetspire (Itea virginica). The garden has been soaking up all this moisture. 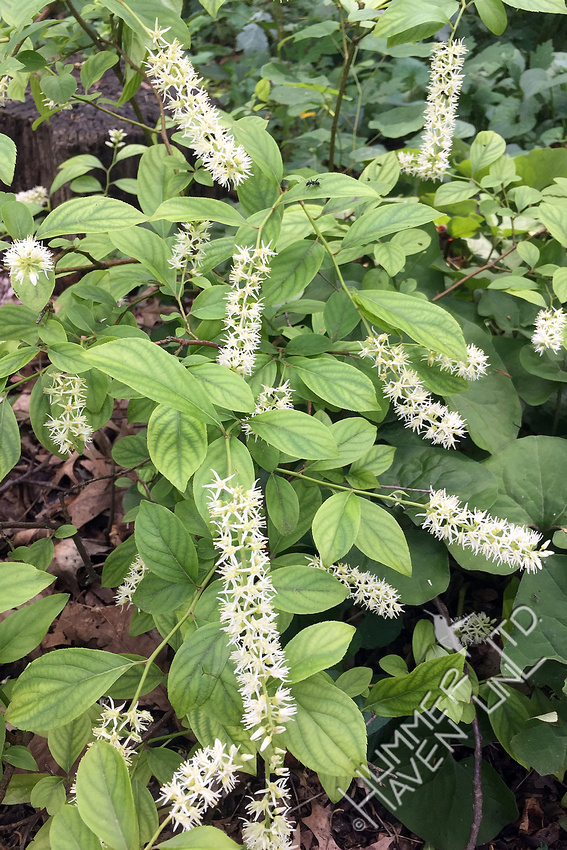 Now, on to birds. The Eastern Phoebe family has been actively feeding in the yard on some days. I saw a juvenile on the arbor once but I never saw them all together again. The adults have been seen more often. They do sometimes produce a second brood. We'll be watching. 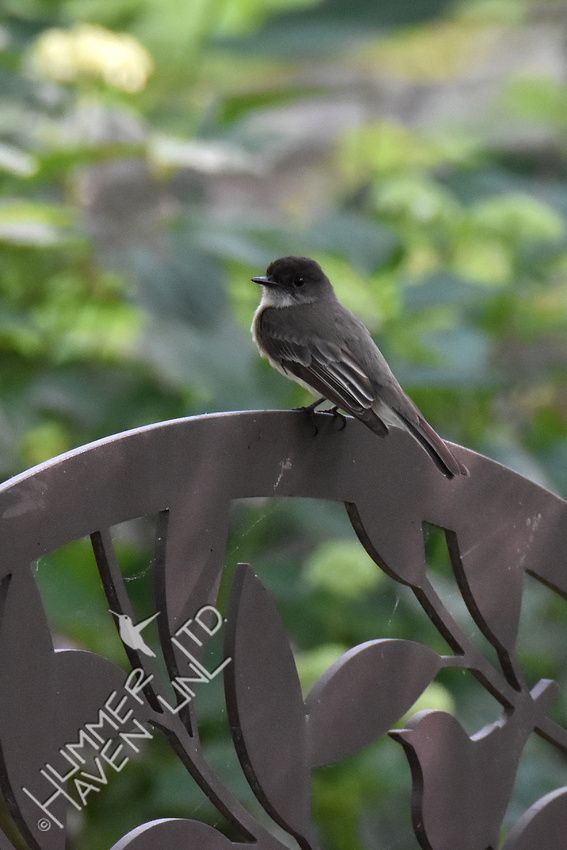 The Downy Woodpeckers have at least one fledgling. The male has been bringing it to the finch feeder for sunflower chips most afternoons. The youngster has red on TOP of its head. 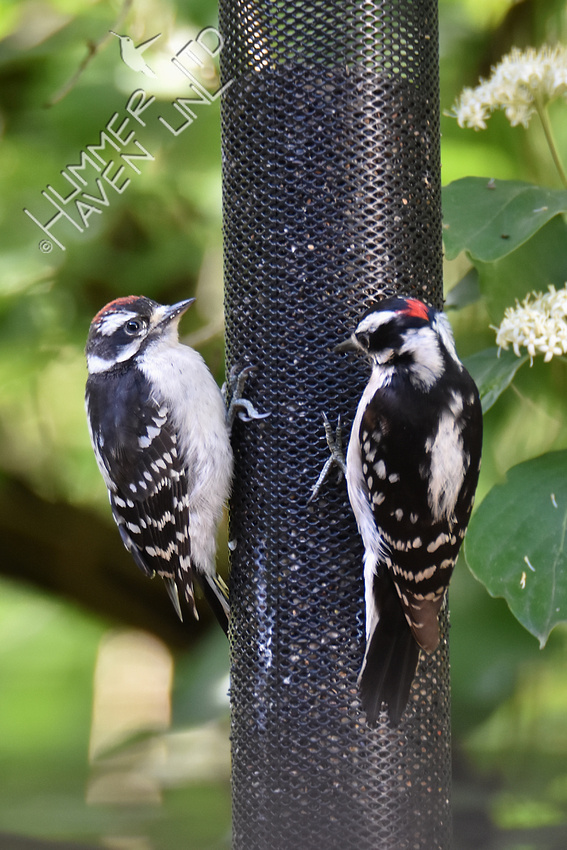 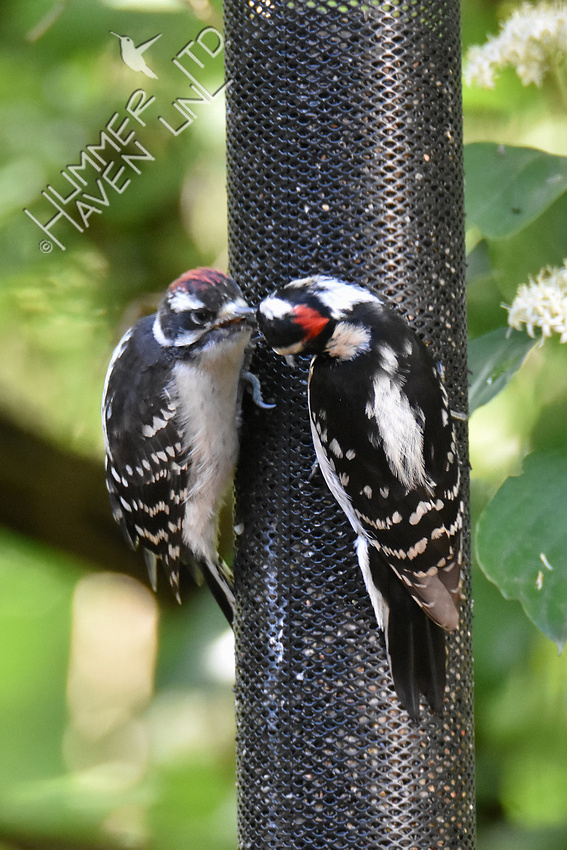 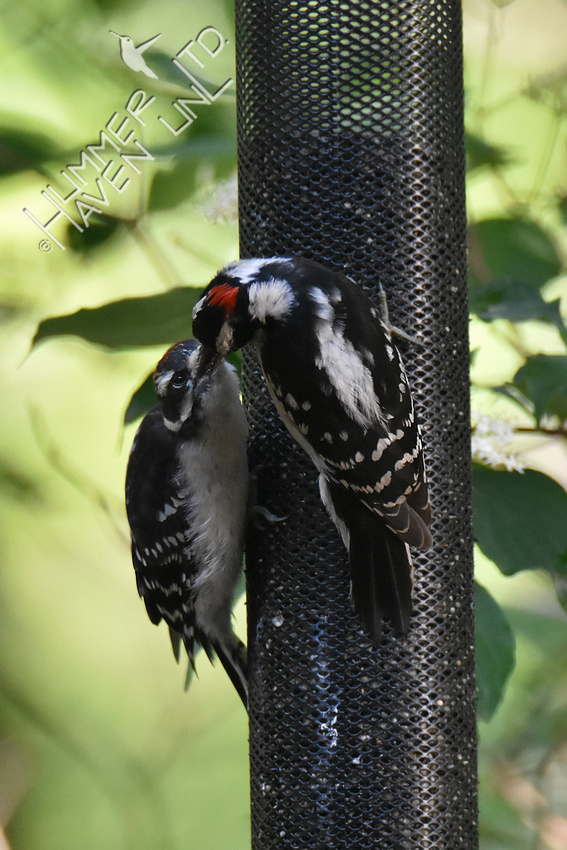 The Northern Cardinals fledged today about 2:00 pm. The adults had been calling a lot to the chicks through the morning. We were outside working around the pond picking up sticks and weeding, cleaning the filter, etc. I said, "I really think the chicks must be ready to fledge, let's leave them to it." Sure enough, as we had our late lunch in the gazebo, we saw one fly from the arbor area up to a branch in the Sugar Maple, right above the stream bed! A second one was already higher in the tree, maybe that's what all the fuss was about. We left them alone after I got these few photos. 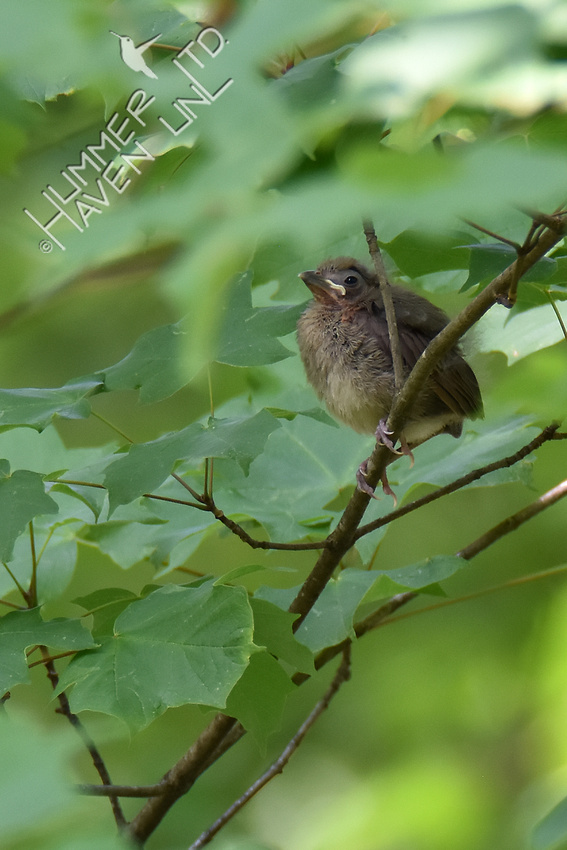 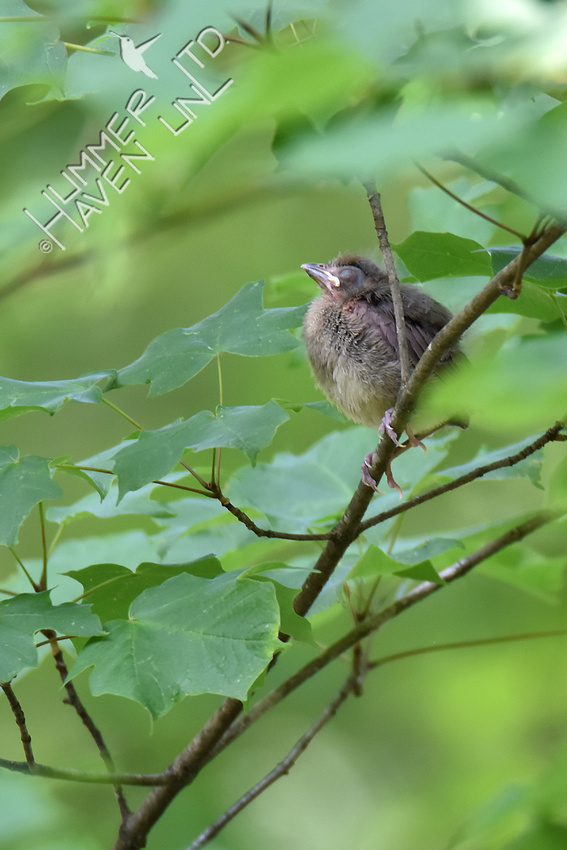 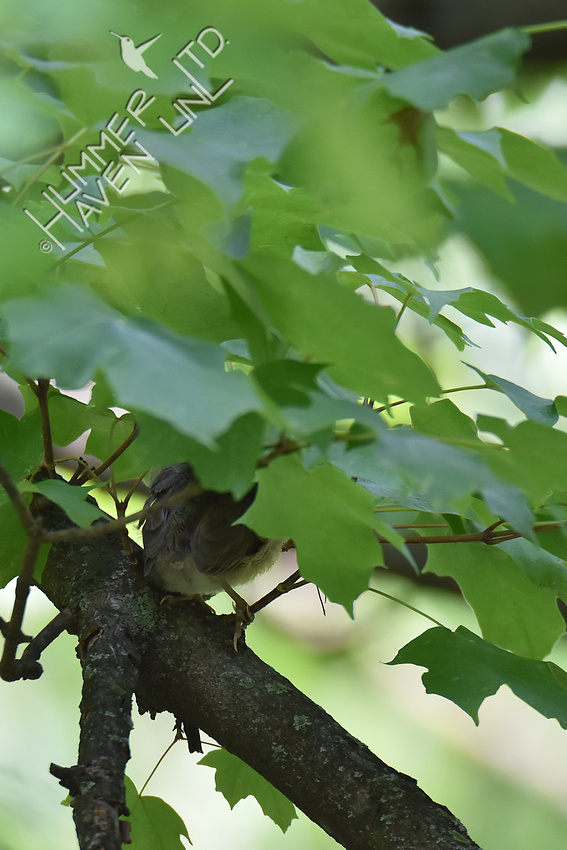 The long distance migrating birds have moved on through. Now, here's a bit of history. At dusk on October 8, 2002, I saw a Connecticut Warbler at our bubbler, just standing there looking at the bubble. It did not take a step. That's right - it WALKS. It doesn't hop. But I had to leave as we were going out to dinner. I reported what I saw and it's recorded as a late fall record for that species.

In May of 2016 and 2018, I heard a Connecticut Warbler singing under the deck, but never could find it. As soon as I opened the door, it went quiet. However, this May brought another sighting of this rare transient.

On Monday, May 27, I had been working on the front porch, setting up the small fountain. About 1:30 pm, I came inside and sat at the table with Dan just in time to see a two-bird skirmish. One bird popped out of a viburnum next to the bubbler, up onto a branch of the hackberry just above. Grabbed my binoculars and bam! Connecticut Warbler! Yellow underneath, blue-gray hood with bright white eye-ring. Had a 2-second look, it kept moving along the branch. Turned, grabbed the camera and went outside. I could not find the bird again. I looked for 3 1/2 hours to no avail. It had gotten breezy, the bird kept on moving. So, that was my first-of-year (FOY) Bird #113.

I was not able to photograph it but I found a photo that shows the bird in almost exactly the same position the I saw it in.

Maybe, some day, before I die, the stars will align...