For the better part of the last ten days, we were visiting family. "Can we go on another bird walk, GyGy?" What music to my ears! Youngsters like our grandsons, Dean and Leif, are eager to learn, like little sponges. It's so important to share with them when they are ready. And so, we did. We walked at the nearby Arboretum, where Dean wanted a closer look at several birds. He really caught on to the idea of keeping his eyes on the bird and then putting the binoculars up to his eyes. This isn't easy! Together we watched a Great Egret fly high into the top of a snag. We talked about its yellow bill, black legs and feet. (Later, we looked at pictures of a Snowy Egret with its black bill and yellow feet to compare.) He also spotted a Wood Duck and knew it was different from the Mallards we'd seen. These details of life are exquisite! Dean also showed me his Waterfowl of California card collection. Wow, he already has learned so much. Leif seems to be absorbing some of this by osmosis and enjoyed 'wearing' the binoculars to get the feel of them.

The next day we visited the Raptor Center. Dean read the signs for each rehabilitated bird. We learned that wild birds like American Kestrels should not be kept as pets, if they are, they become dependent on people and cannot be released into the wild. We watched one as it ate a mouse for breakfast. In the afternoon, we looked for birds near their house and along the adjacent green space called the agricultural buffer. Dean really wanted to find an American Kestrel, but there were four Red-tailed Hawks overhead and no kestrels to be seen. I showed him where I had seen them before on the electric lines and fences.

We were able to find Dean's target bird the next day when we saw a pair of American Kestrels on the electric pole. Dean was a happy camper! So was I, until it was time to leave... 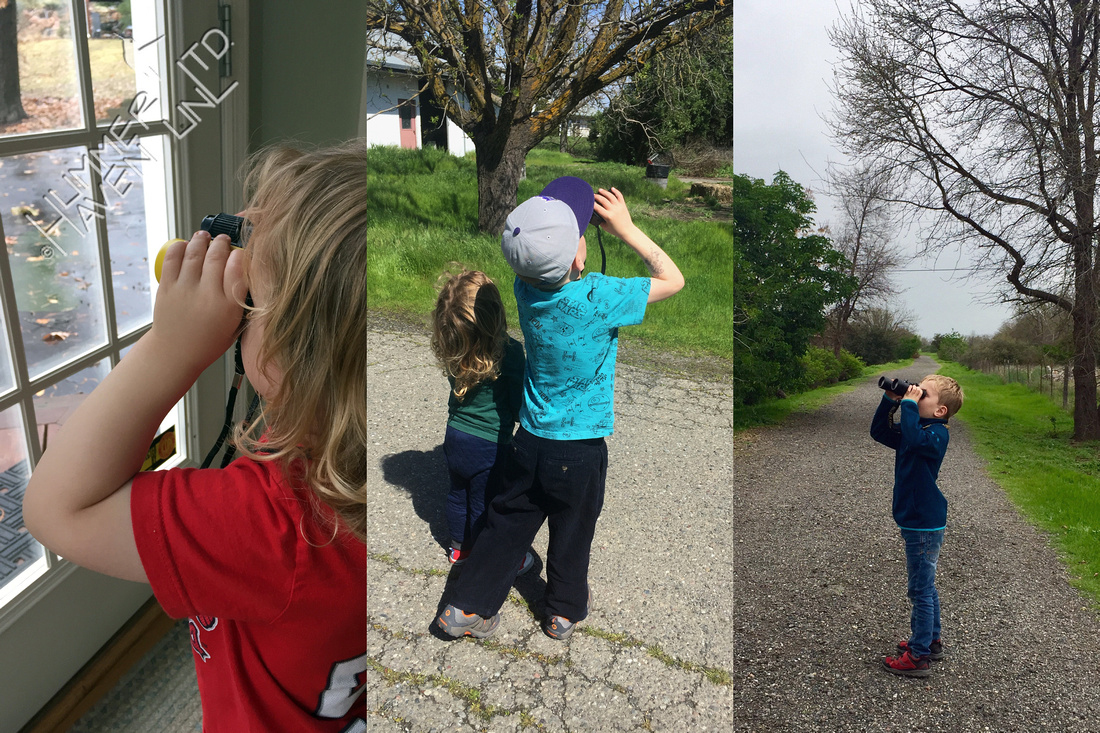 Once back at home, it was time to look for birds in our yard. A Golden-crowned Kinglet was still coming in find insects, this time on a shingle oak (Quercus imbricaria). 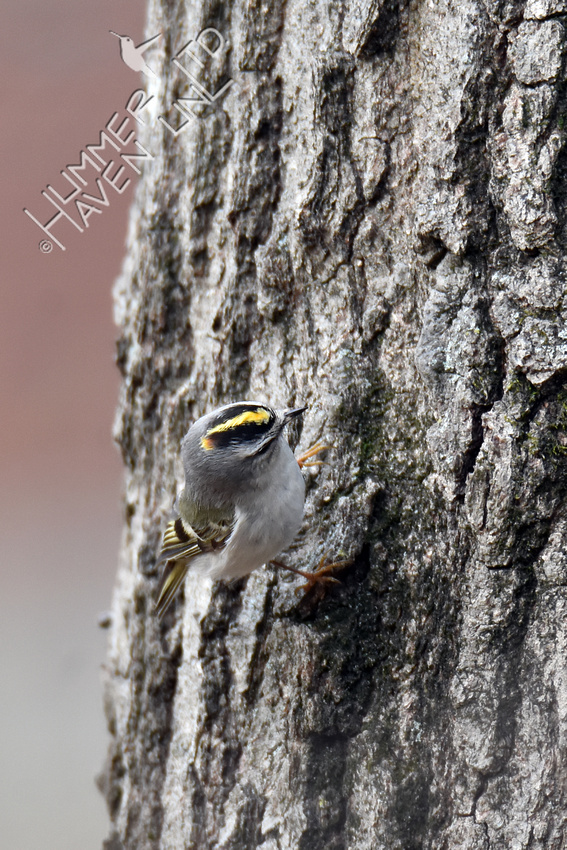 At one point, there were four Eastern Phoebes in the woodland, vying for the rights to the location, getting drinks and catching crickets. 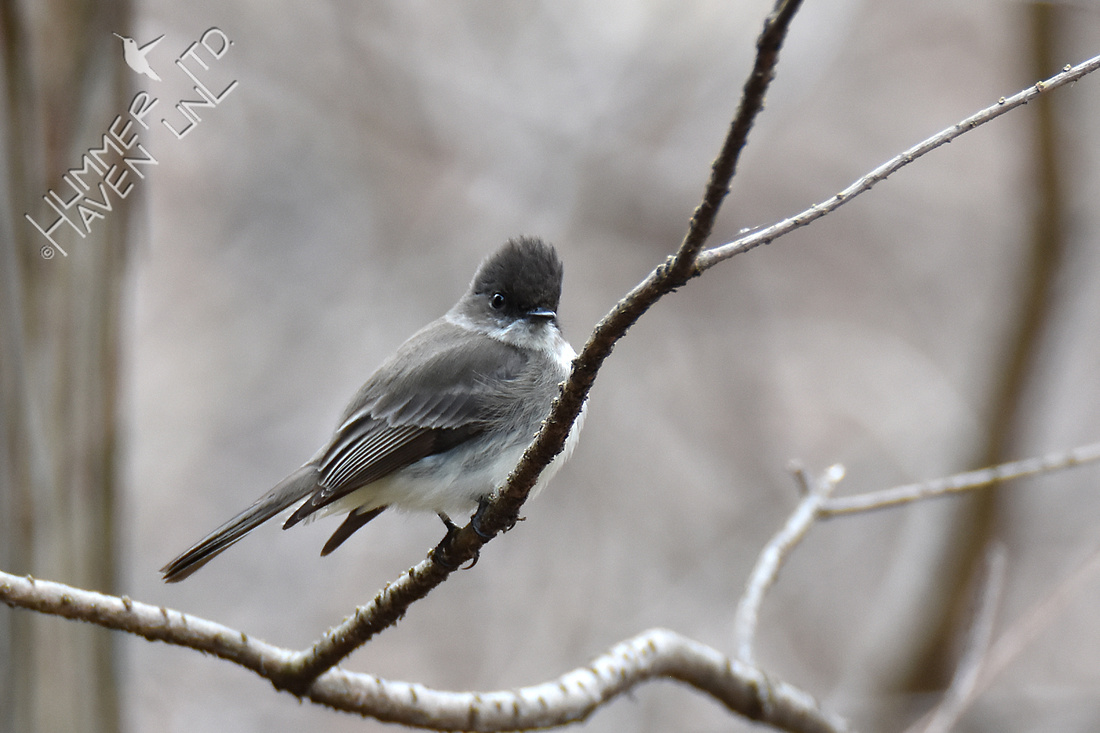 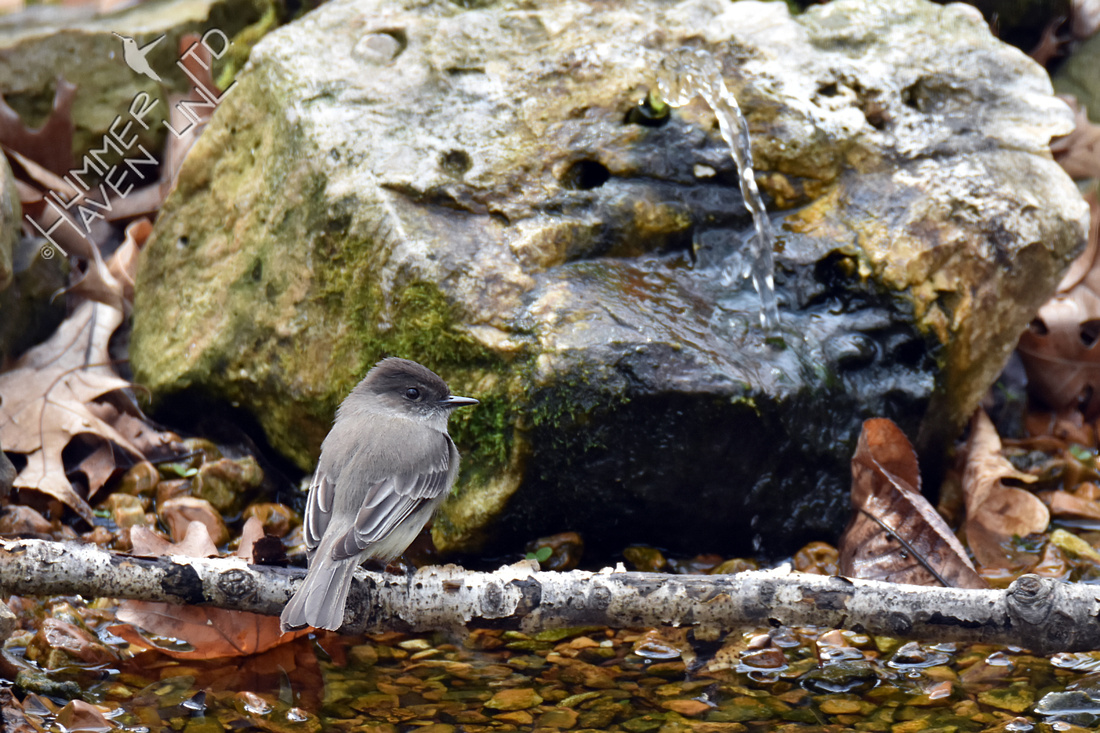 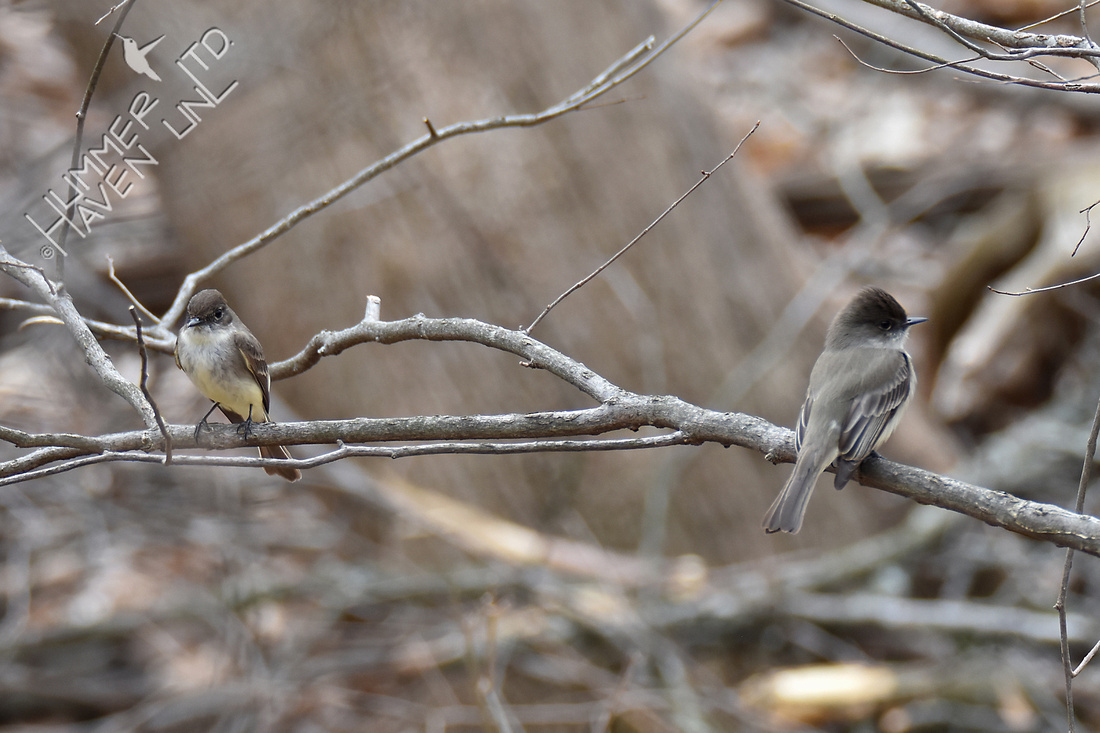 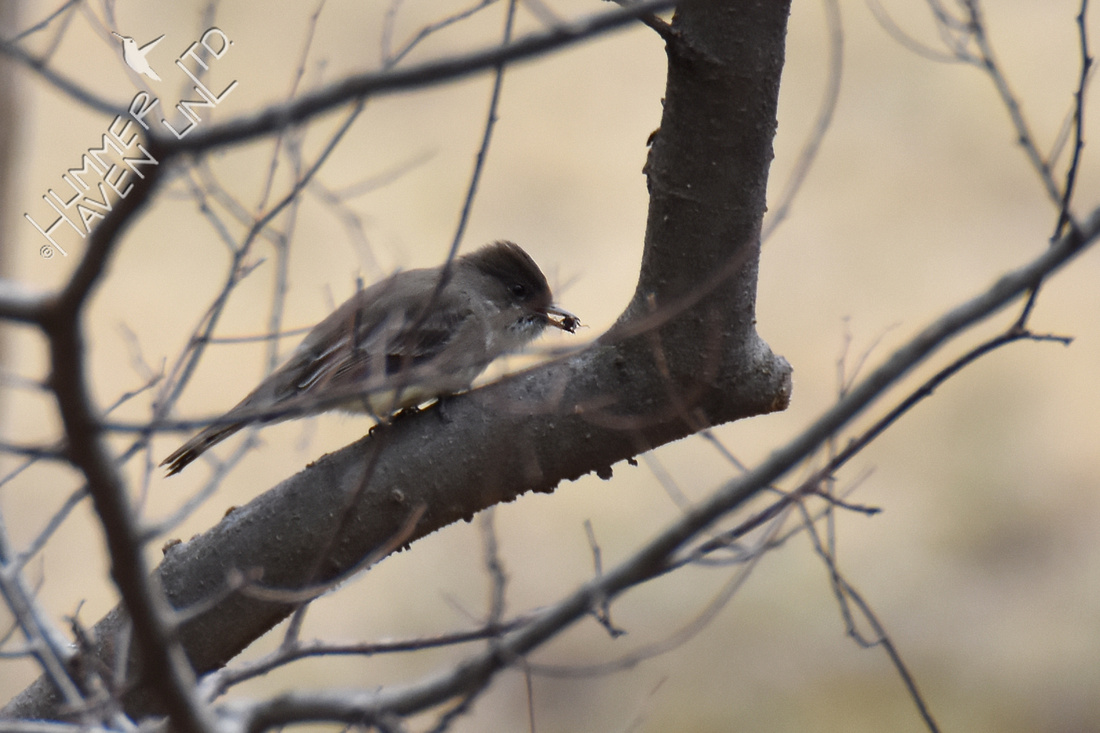 American Goldfinches are nearly in their full spring plumage with bright yellow feathers and black caps. This male was nibbling on American elm buds for carotenoids. 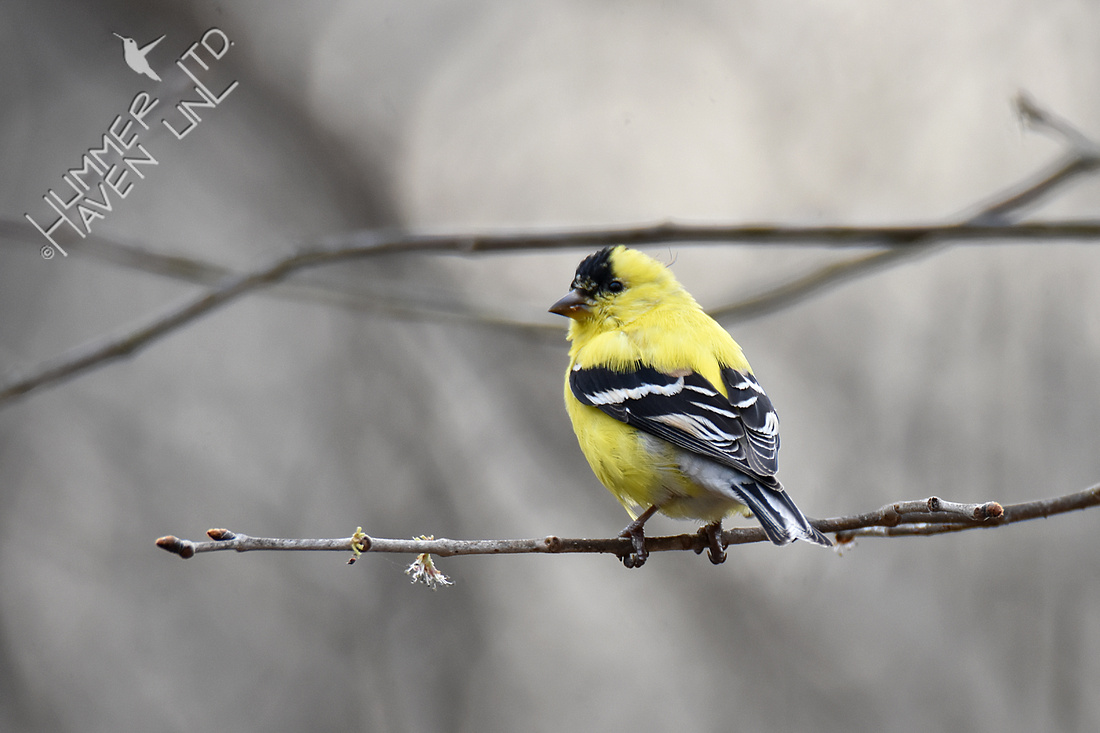 Pine Siskins came back to the feeders again. 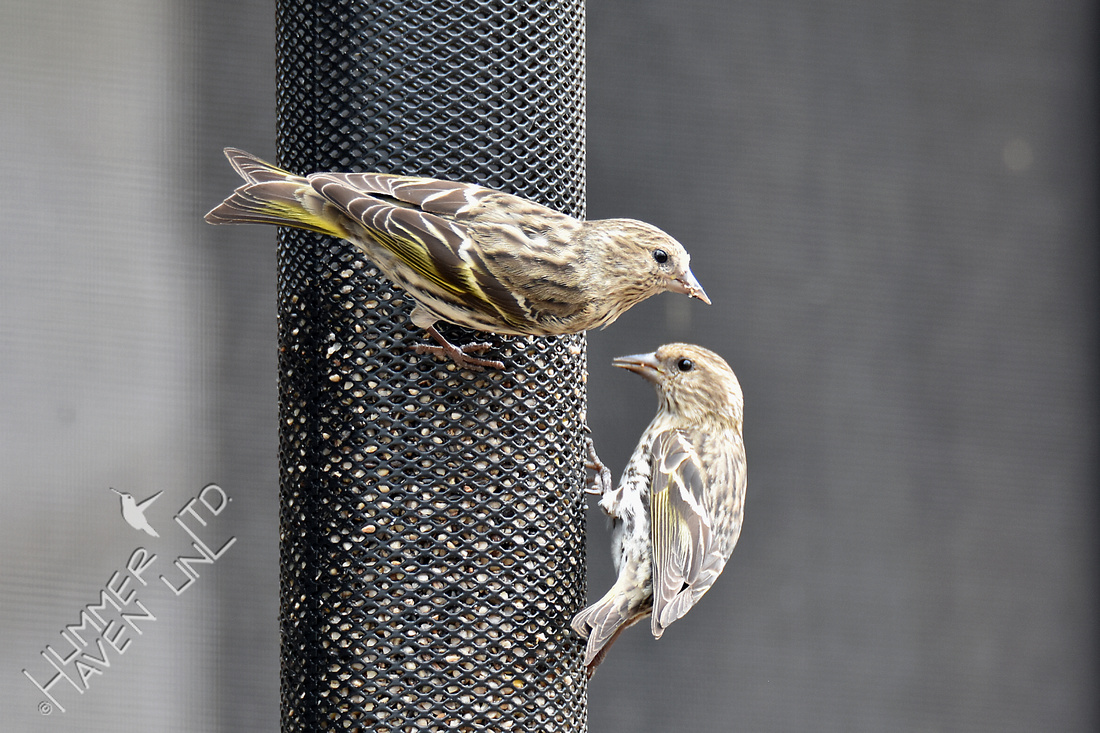 After nearly two weeks, a Red-breasted Nuthatch returned. The bird was distracted from caching a peanut by the numerous larvae and flying insects that were hatching out. 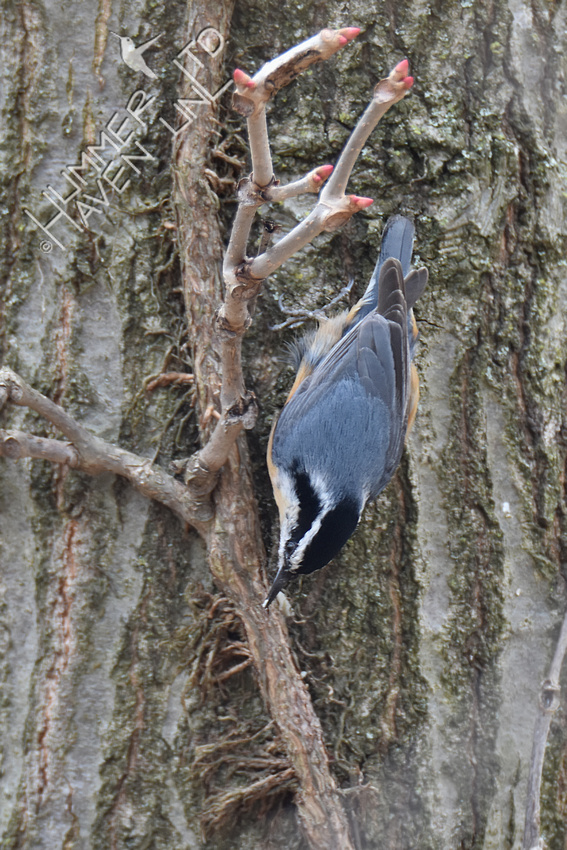 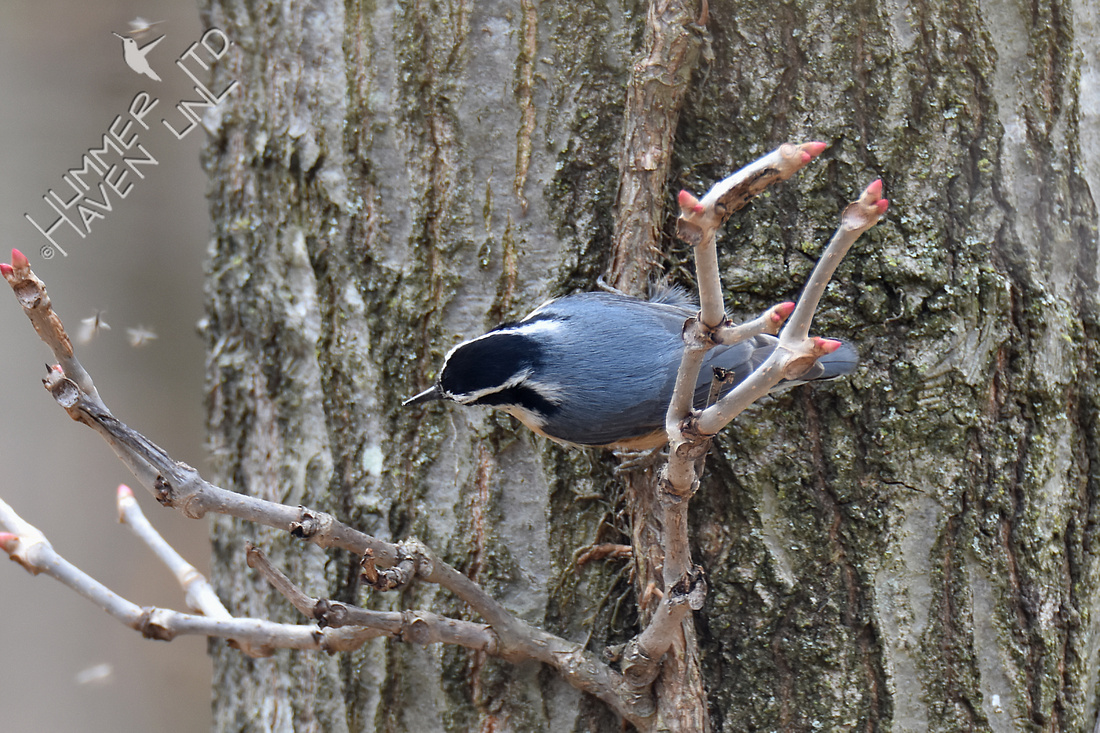 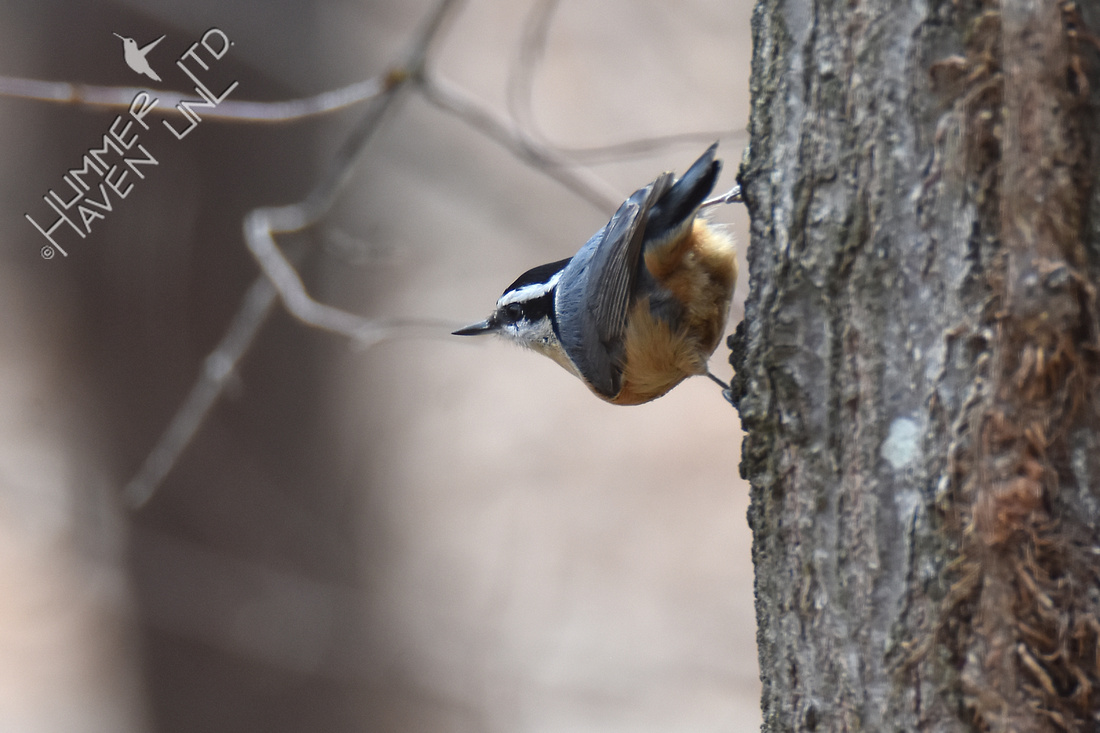 I was about to leave for an appointment when Dan told me there was a bird in the wet area, really bobbing its tail. Woohoo! It was a new bird for the year, a Louisiana Waterthrush! This species is one of the earliest warblers to arrive. (The Northern Waterthrush arrives two to three weeks later.) This bird was finding small insects in the water to eat. I saw it later in the day, checking out the pond and the bubbler. Its camouflage blends in perfectly with bubble-gum pink legs nearly the same color as the stems of the Rough-leaf dogwood (Cornus drummondii). 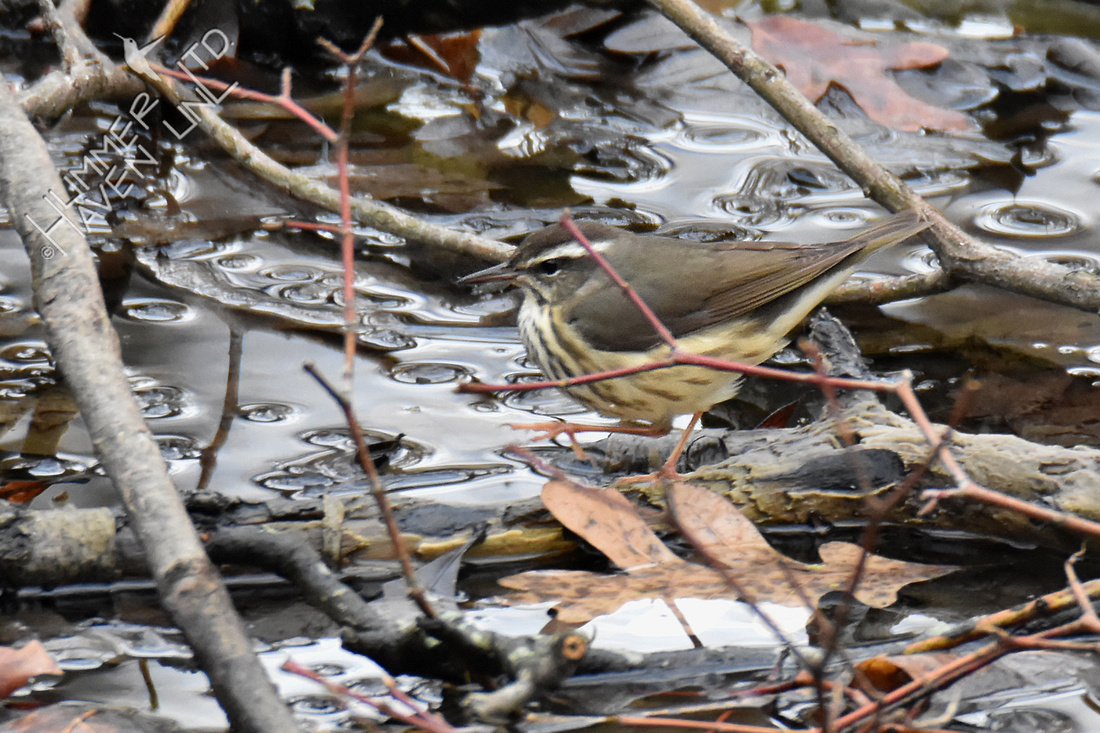 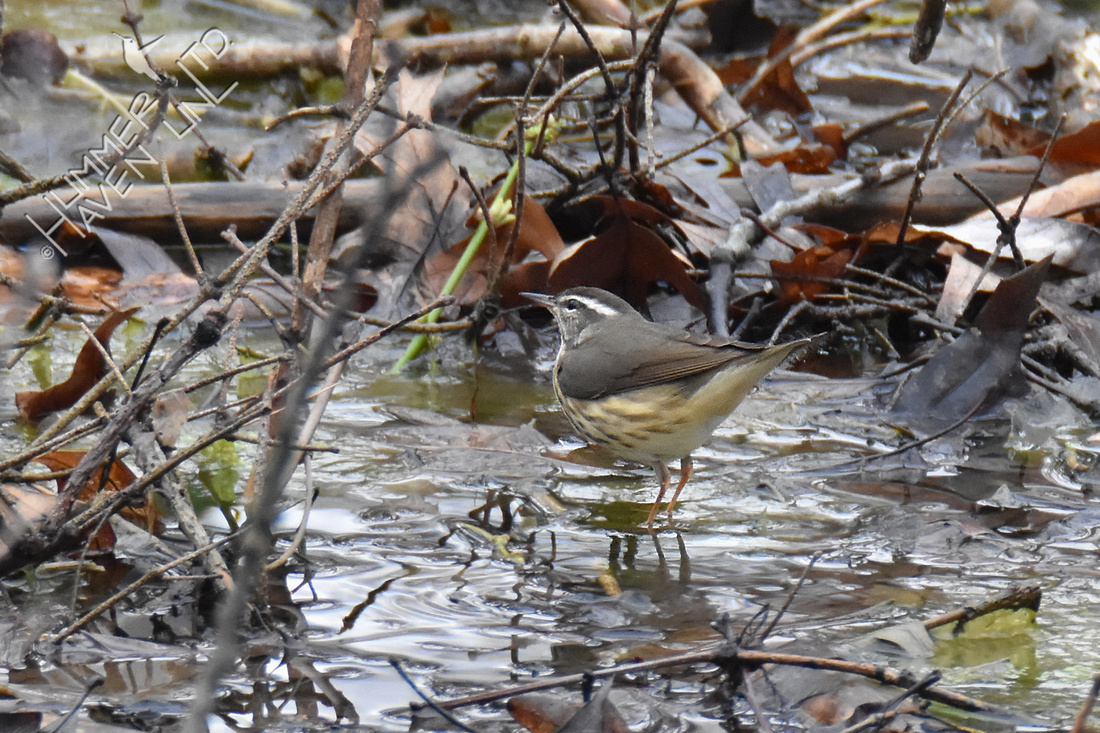 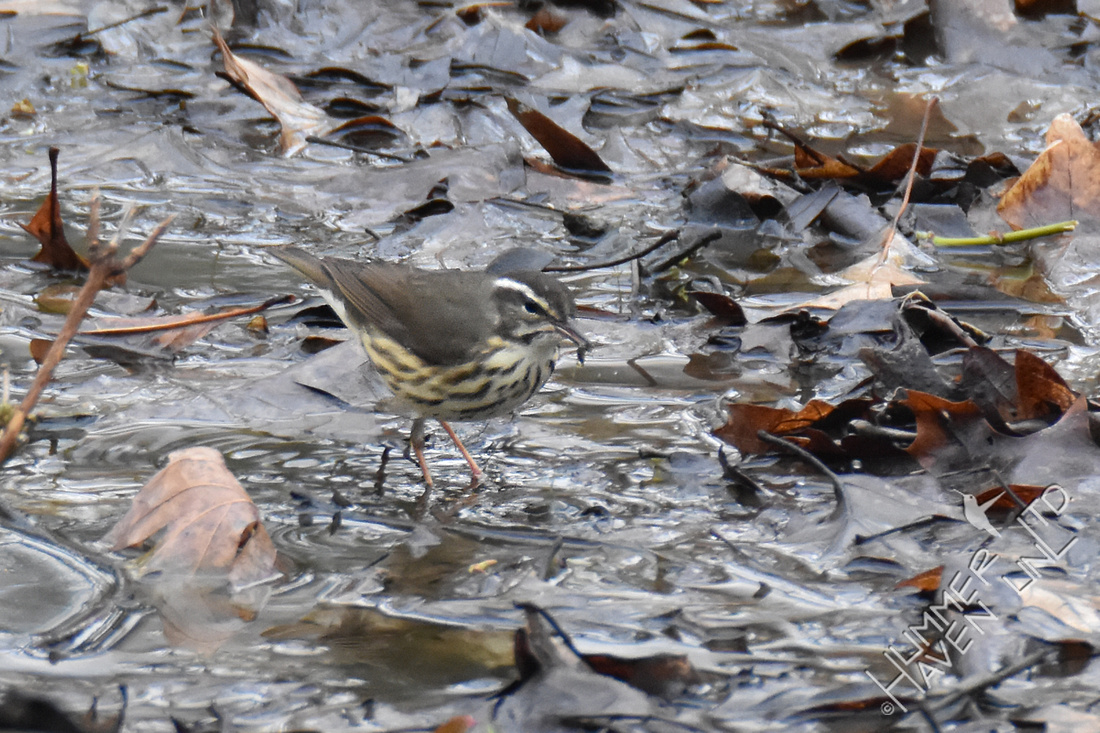 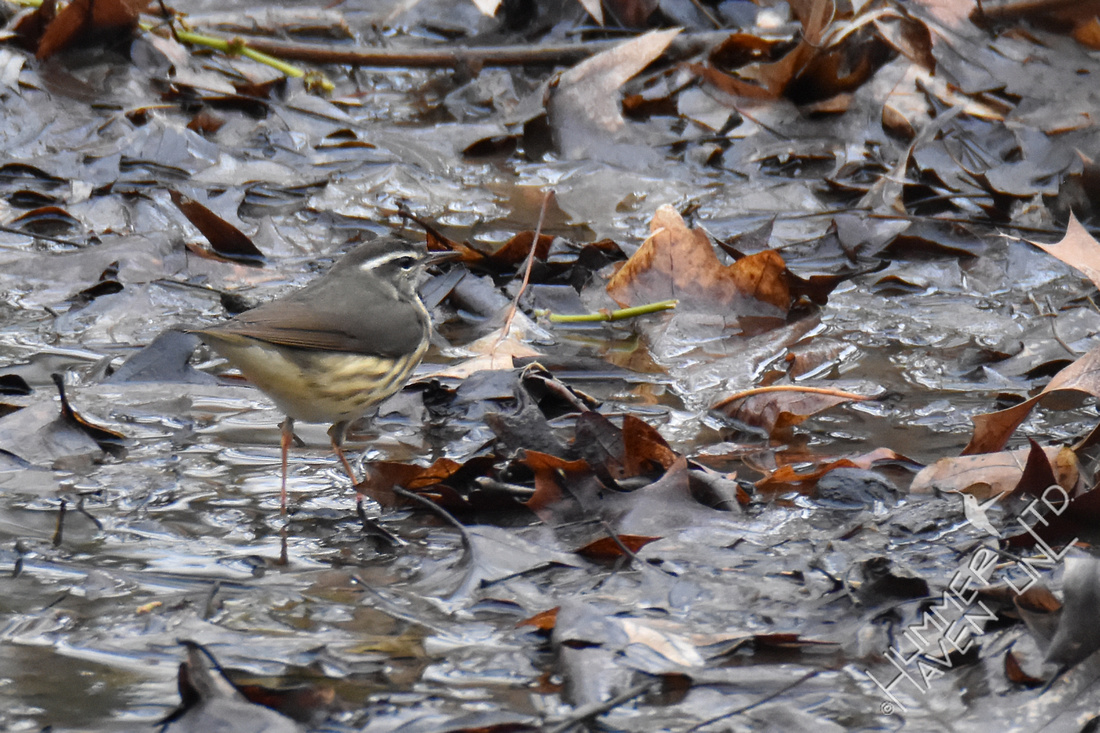 Let's look at some of the fine points in separating out the two species of waterthrushes. Both birds are 6 inches long, yet their songs are different. Here are some tips, click on the links if you want to learn more.

* Brown above with well defined streaking below

* Usually has a bold white eyebrow

* Overall is thinner in shape - Bill is longer, legs are longer and bright 'bubblegum' color in the spring

* Bobs entire back half of body in a somewhat lazy, semi-circular motion 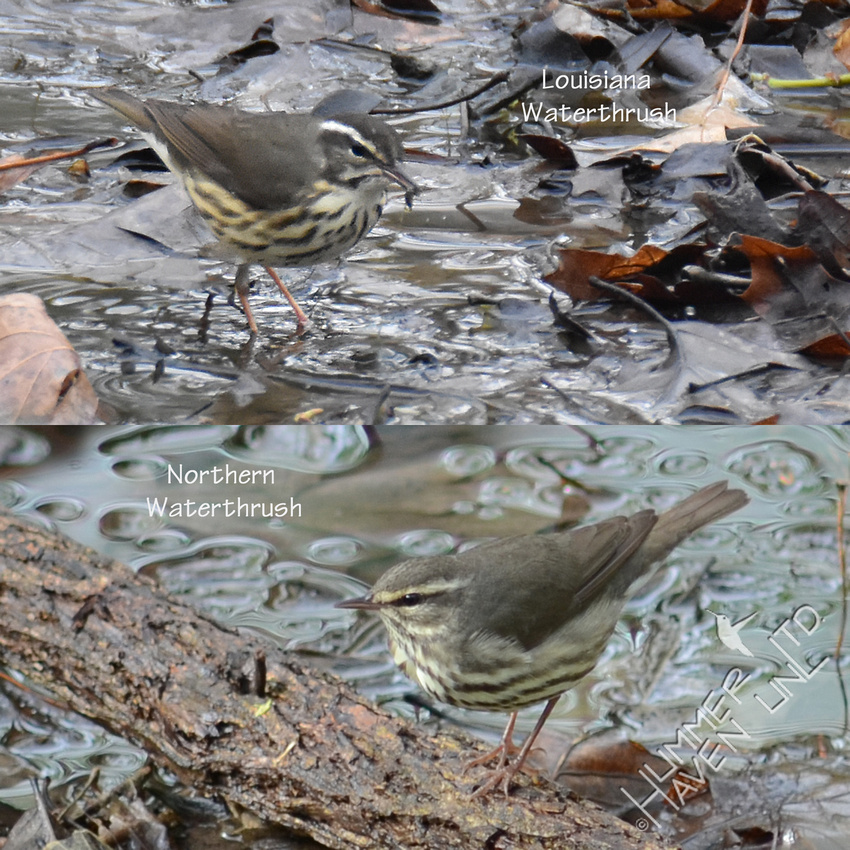 * Brown above, uniformly yellowish, buffy or whitish below with brown streaking

* Bobs tail up and down

Today has been raw and wet. We did see the Louisiana Waterthrush again, and another surprise. Our FOY Yellow-throated Warbler showed up, behaving much the same as the Golden-crowned Kinglet! It was busy finding insects to eat in the bark of several trees. It also picked one up out of the leaf litter. This is the first year I've seen both of these warblers in March. 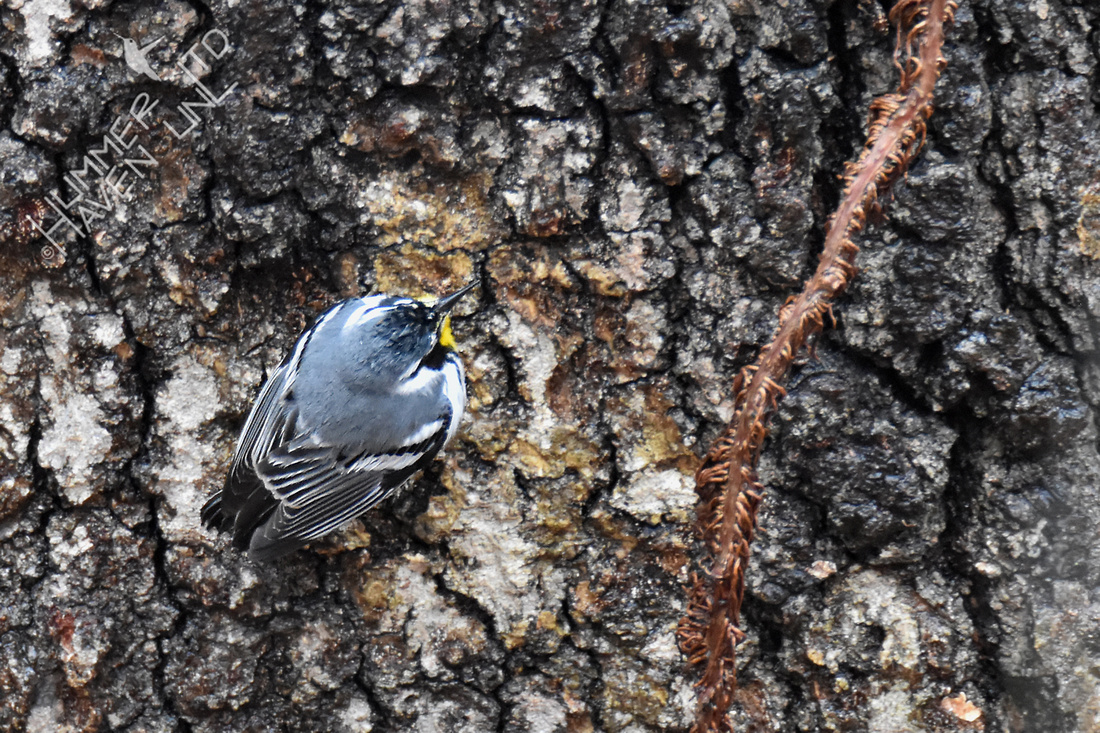 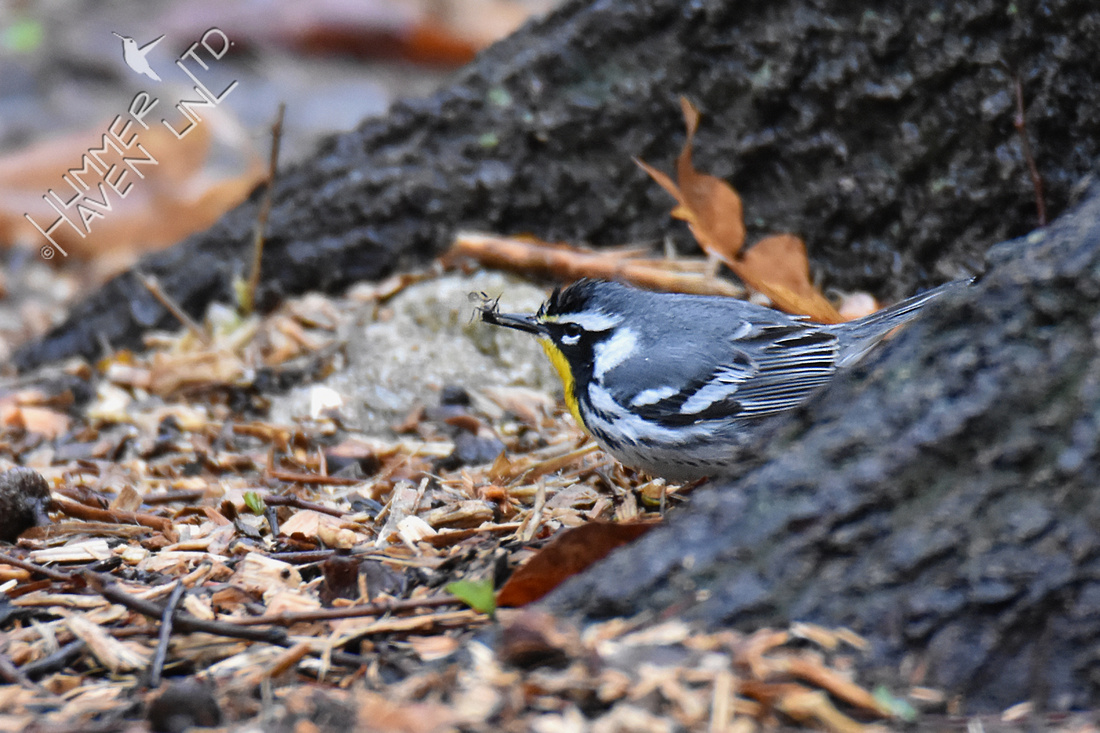 One last update:  Thursday, I was on the deck when two Red-shouldered Hawks flew in together, calling and calling! It looks like the male has found a new mate...OR the bird that was injured was not his mate after all. The male has been coming in and then carrying food in the direction of the nest. I will check on it in a few days. In the meantime. the injured bird has been coming along well and is eating on its own. More on these birds next time!