Since the last post, there have been quite a few sightings.  A worn Great Crested Flycatcher was busy looking for food for its fledgling on Tuesday, July 25.  The younger bird looks bright and alert with more white on its feather edges.  Such fun to see this species nesting here. 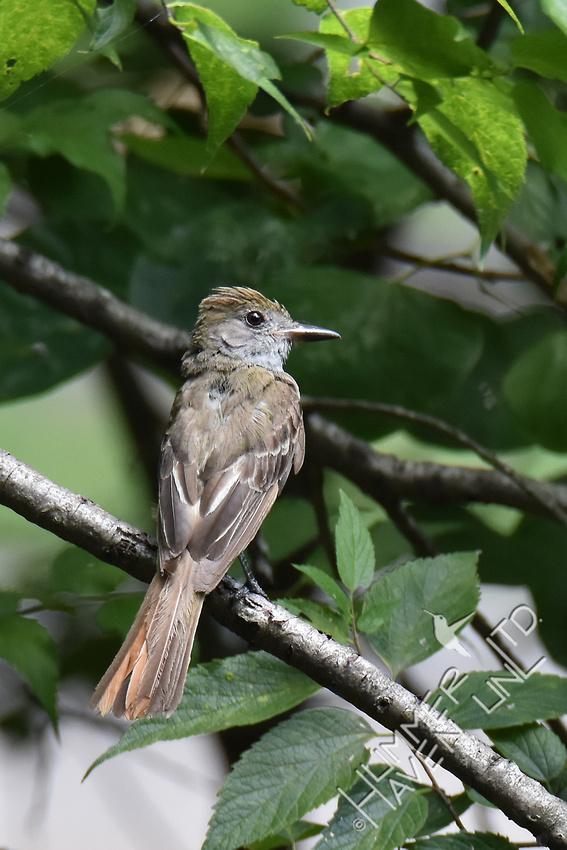 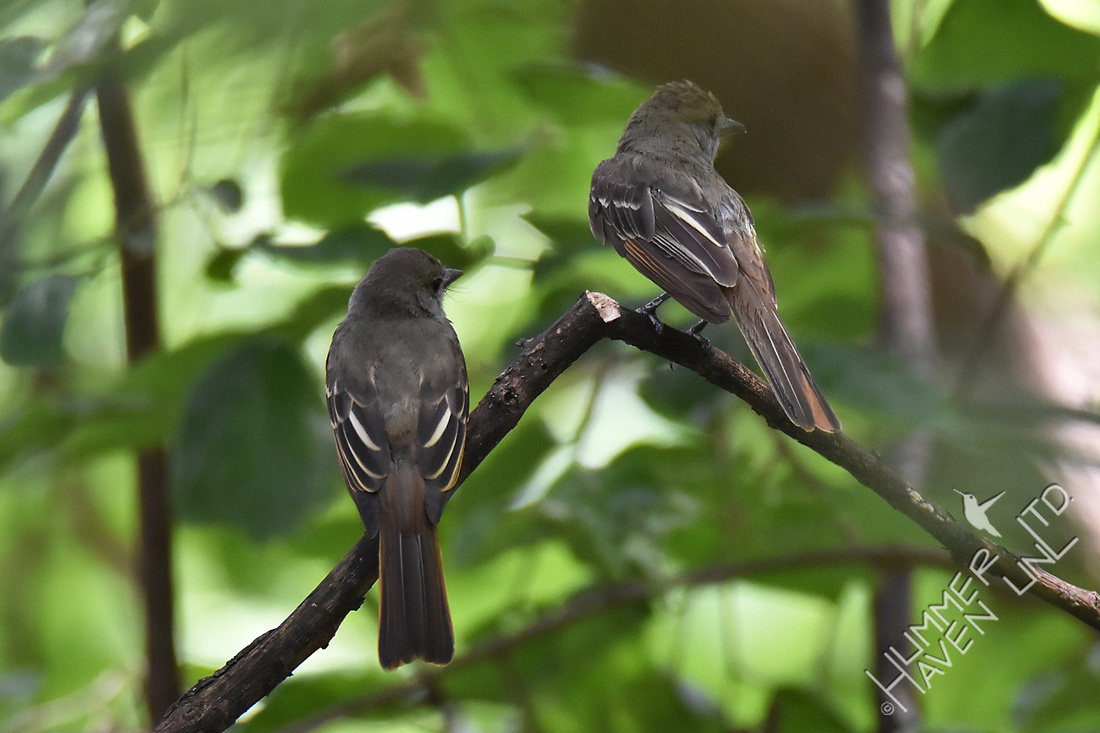 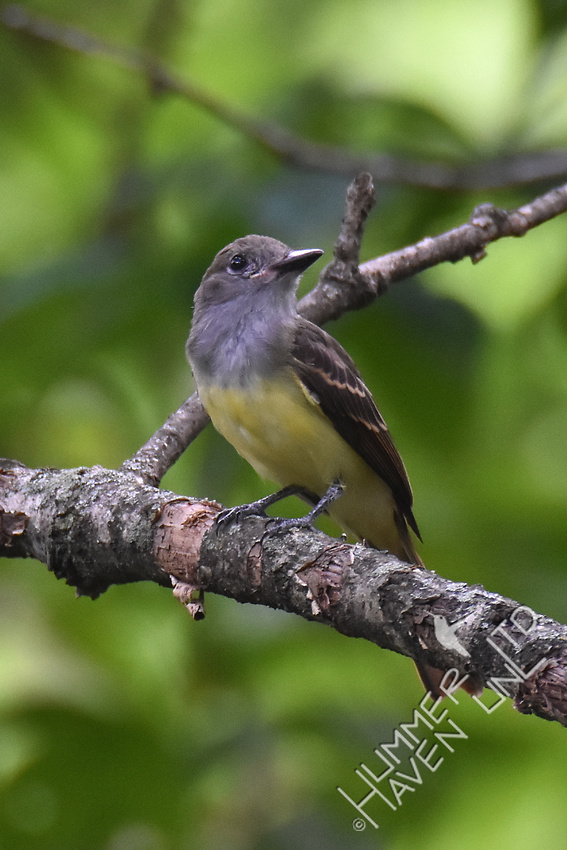 A female Monarch was seen on Friday, July 28 laying eggs on the Marsh Milkweed (Asclepias tuberosa).  I watched the butterfly work through the garden for about an hour and it finally took a break to nectar on freshly opened blossoms. 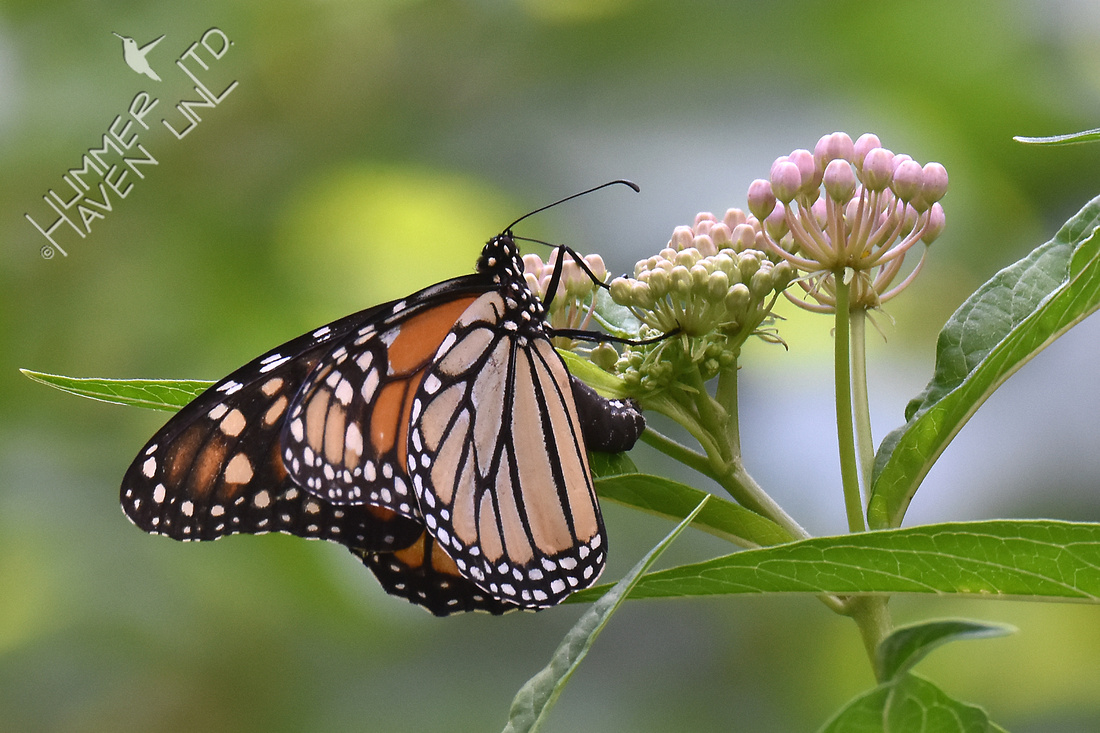 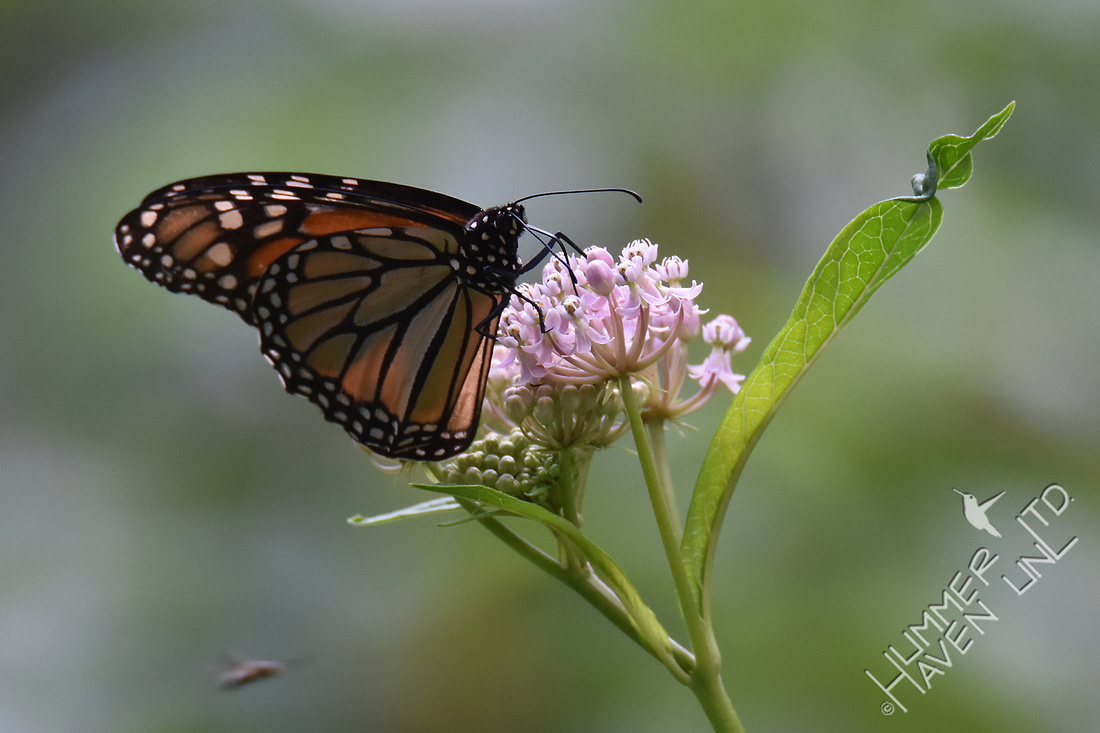 The next day, a female Blue Dasher took a rest on a spent Purple Coneflower (Echinacea purpurea).  How beautiful it was in the soft light as its coloring blended in with the spiky seed head. 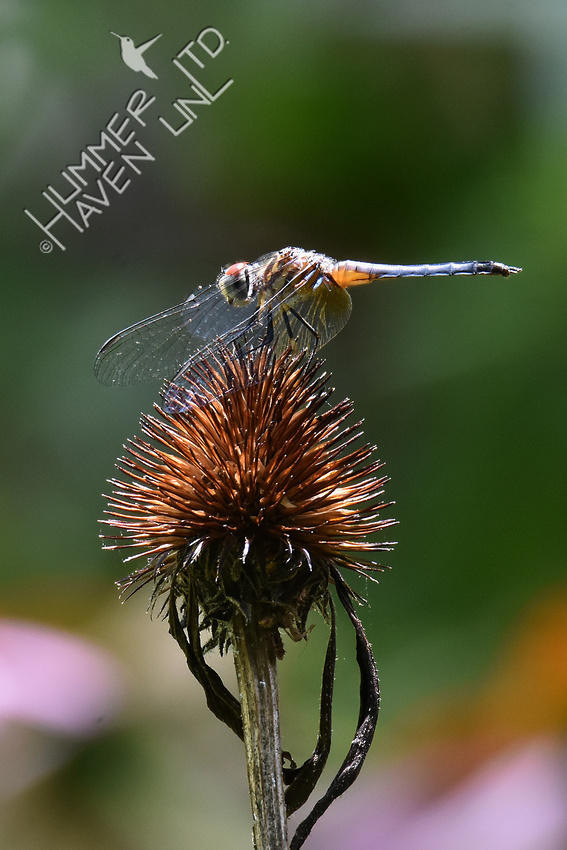 On Sunday, July 30, a Painted Lady was busy nectaring in the garden, mainly on the coneflowers.  It was my first opportunity to photograph this uncommon butterfly here. 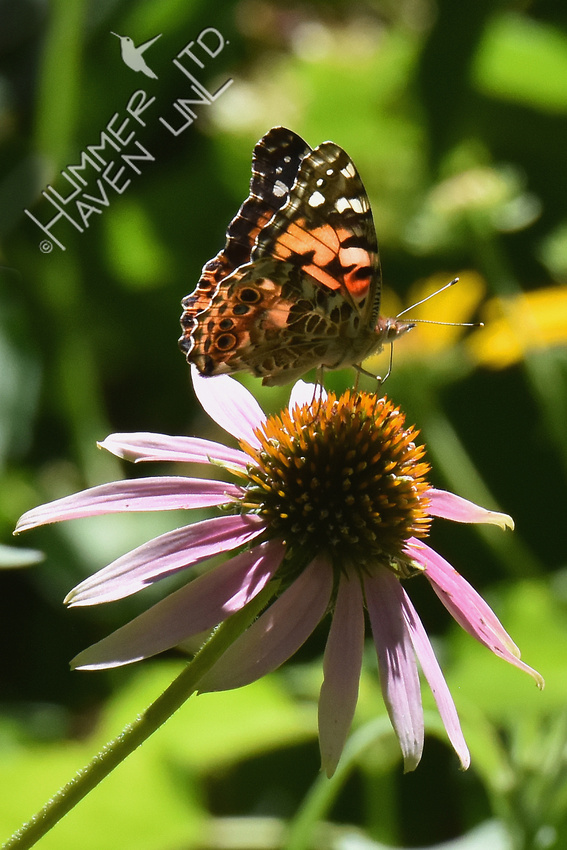 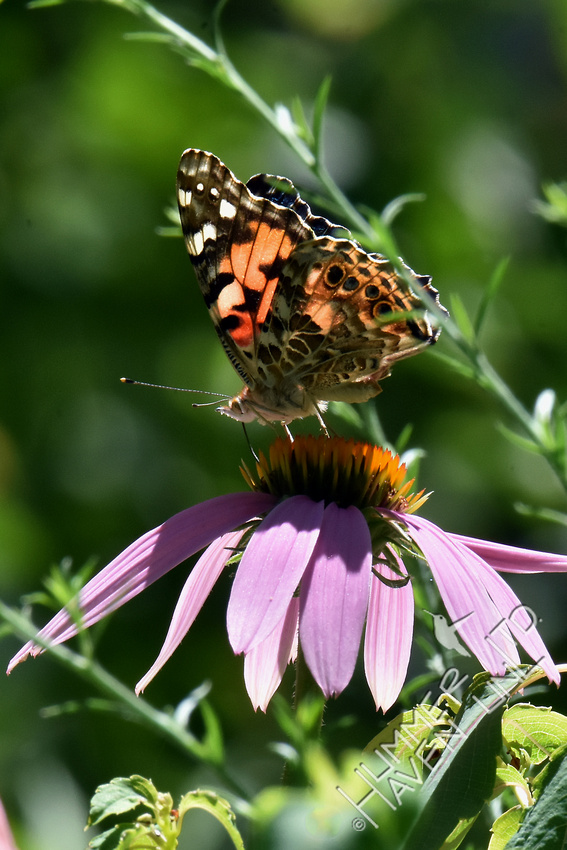 As I followed the butterfly, I noticed a Tufted Titmouse flying down to the garden and briefly laying down, not dust-bathing but sun-bathing.  Another Titmouse joined it, literally laying on top and giving it a hug!  Isn't that interesting behavior? 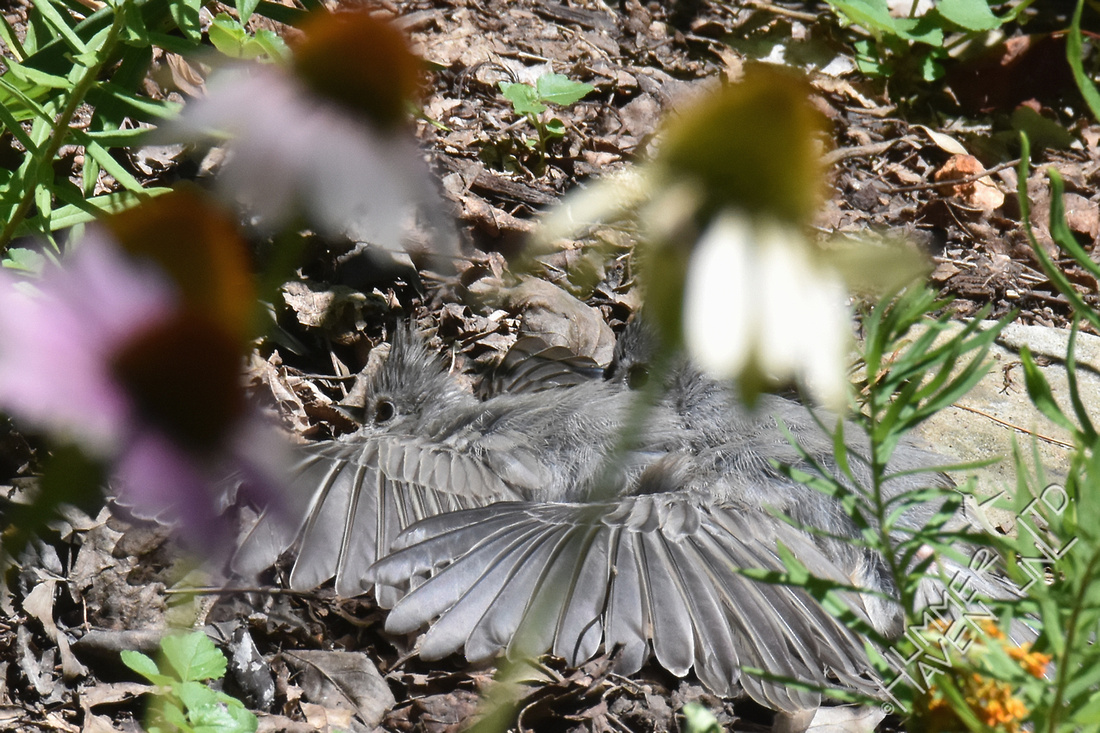 They would pop up to a tree branch for a while and down to the garden again, only staying maybe 30 seconds.  This went on for several minutes.  One tried the bench but that just wasn't the same. 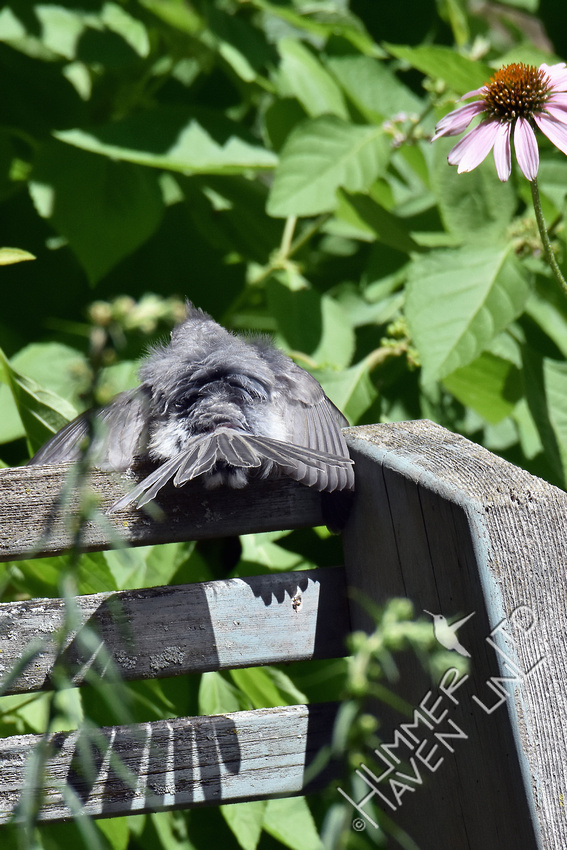 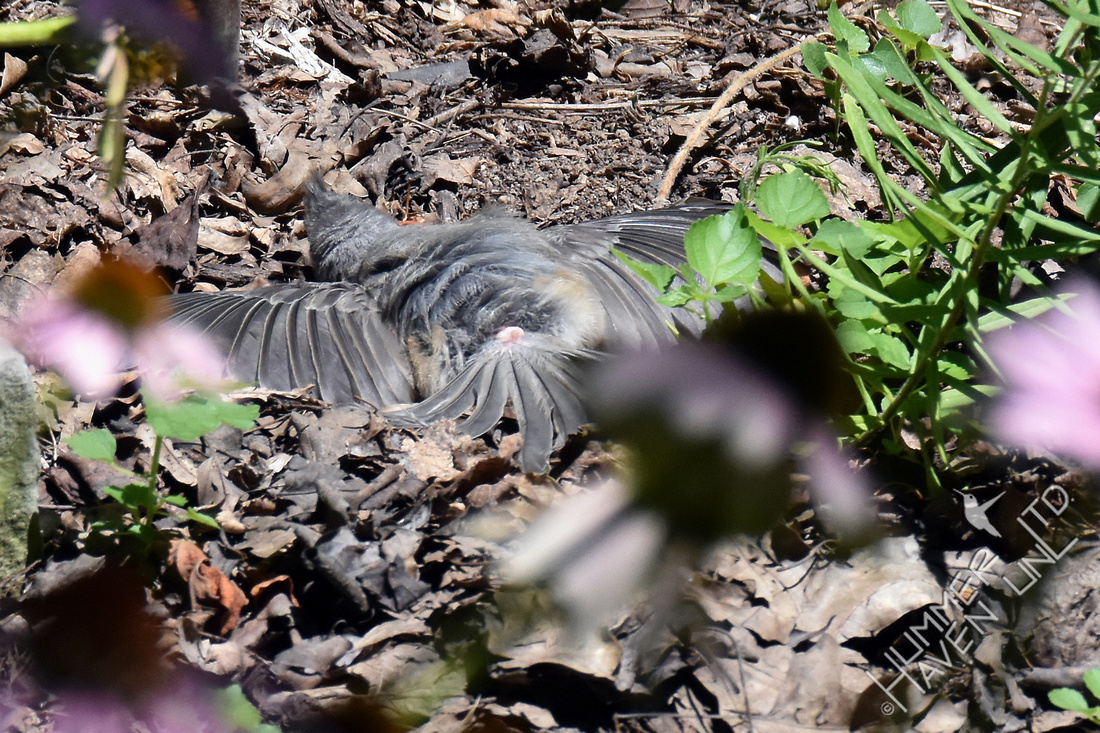 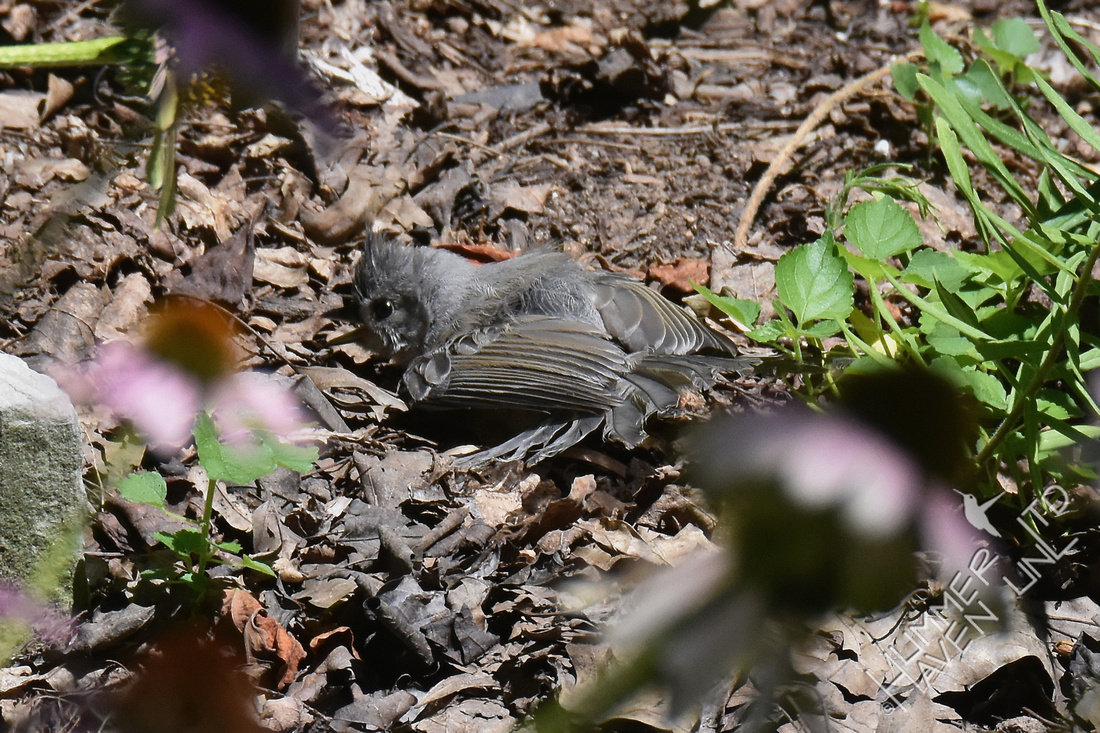 A Great Crested Flycatcher got in on the act and I also saw a Ruby-throated Hummingbird lay down for just a few seconds.  Look closely as the flycatcher nestled in under the coneflowers near the basil.  It had been very cool overnight at 60 degrees so perhaps they were indeed just soaking up a bit of warmth in anticipation of another cool night. 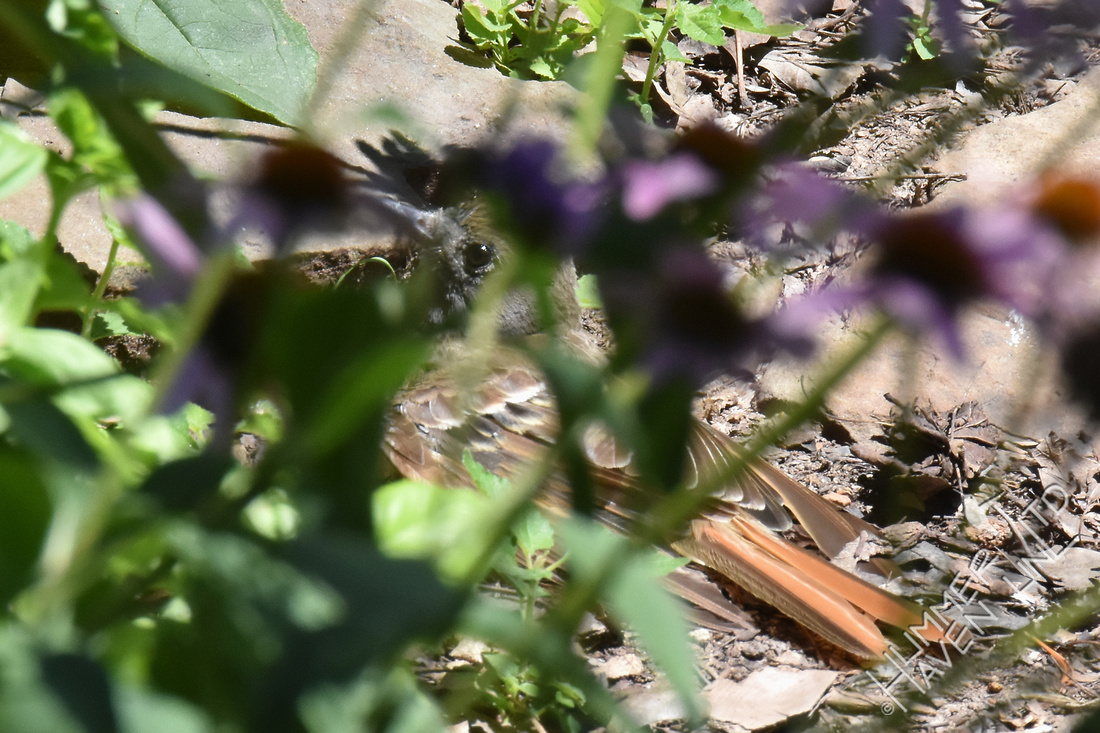 The cool weather brought in more Ruby-throated Hummingbirds and they have been chasing each other through the garden.  The Cardinal flower is nestled in between patches of milkweed and coneflowers and not nearly as tall.  The birds find its bright red blossoms nonetheless. 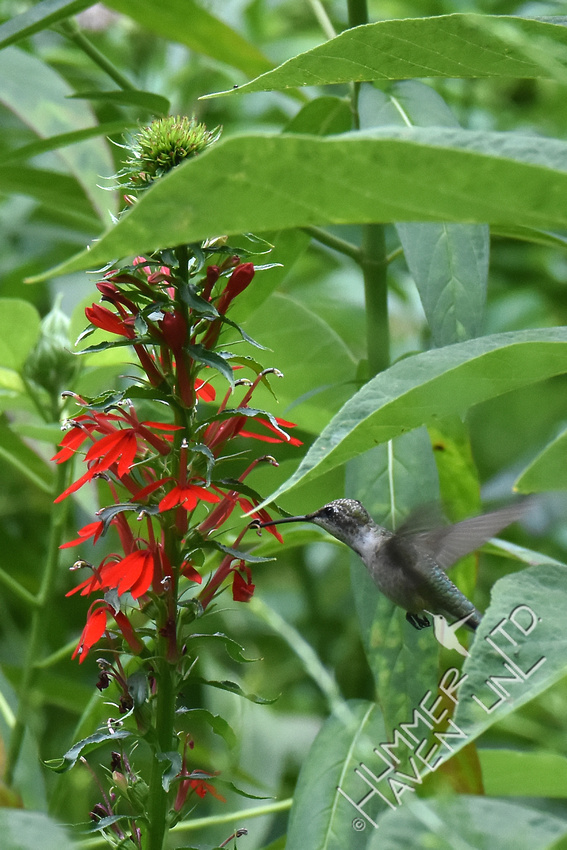 Today, one of the young hummingbirds had a chance to drink from a plant near the pond, much closer to where I was waiting.  Fascinating to capture the pollen being deposited on its head as it thrust its bill into the blossom.  See the tiny yellow grain of pollen falling away?  Bird and plant are perfectly compatible. 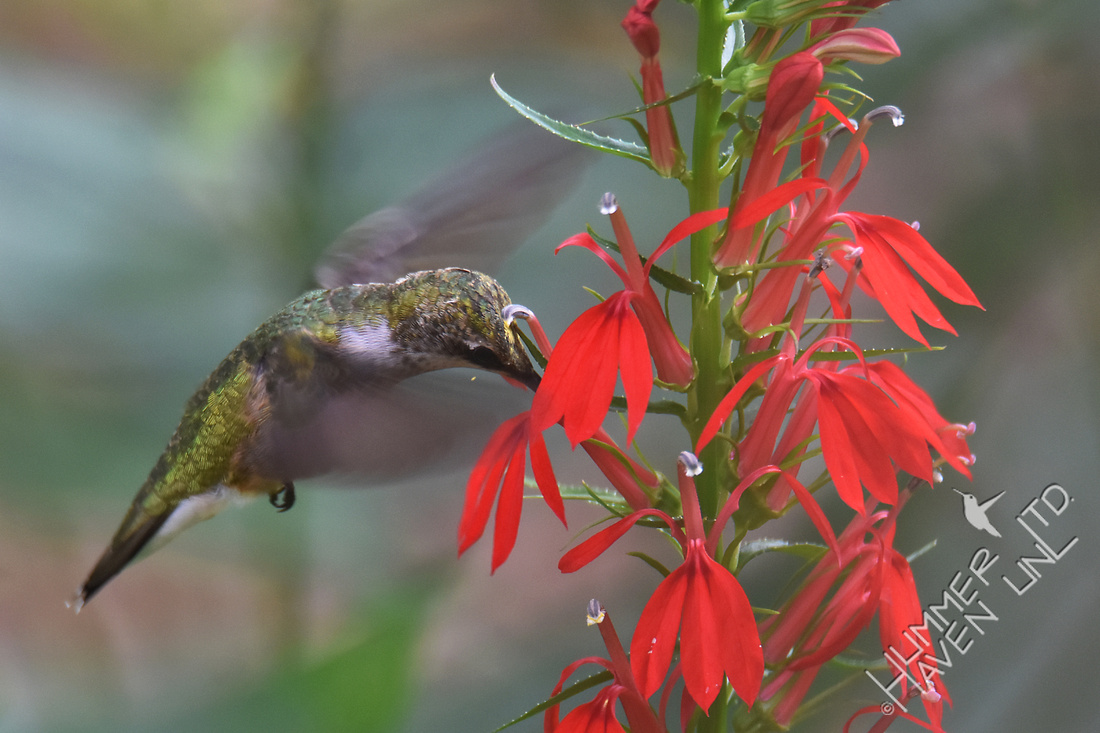 A Coopers Hawk has been in the woods on several different days.  It was perched near the Bubbler on Tuesday, August 1. 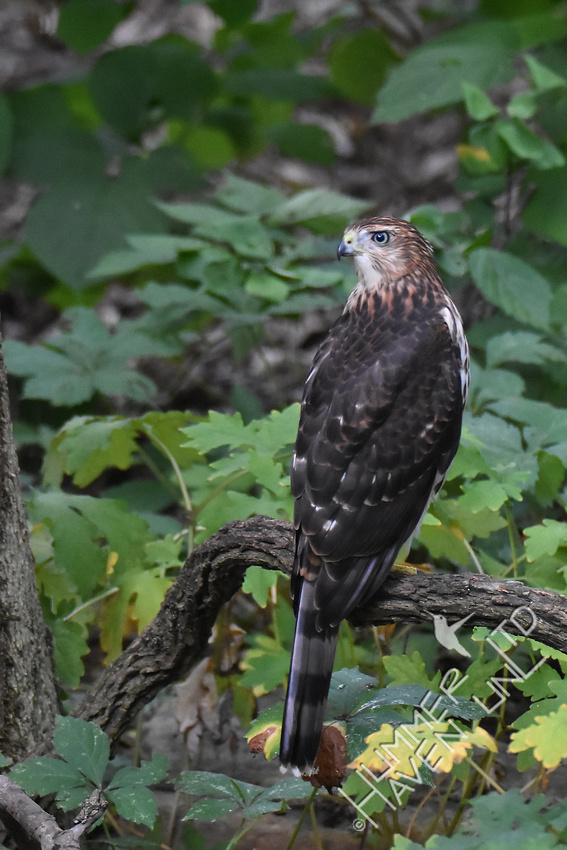 A Northern Flicker got in to get a good bath the next day when the hawk wasn't around. 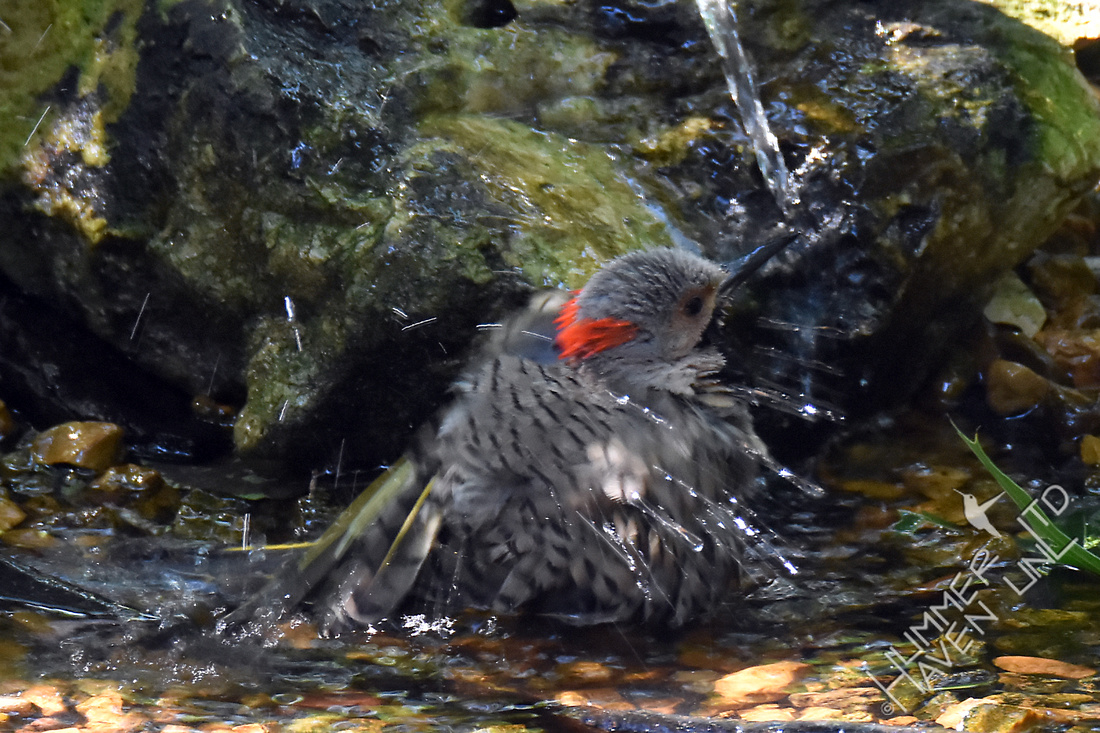 It was Thursday, August 3.  As often happens, I thought I saw the Painted Lady again and by the time I got the camera, I could not re-find it.  I waited on the landing and the Carolina Wren started fussing up a storm.  It circled around me and into the thicket.  I went up to the deck to see what the problem might be and didn't see anything at first. 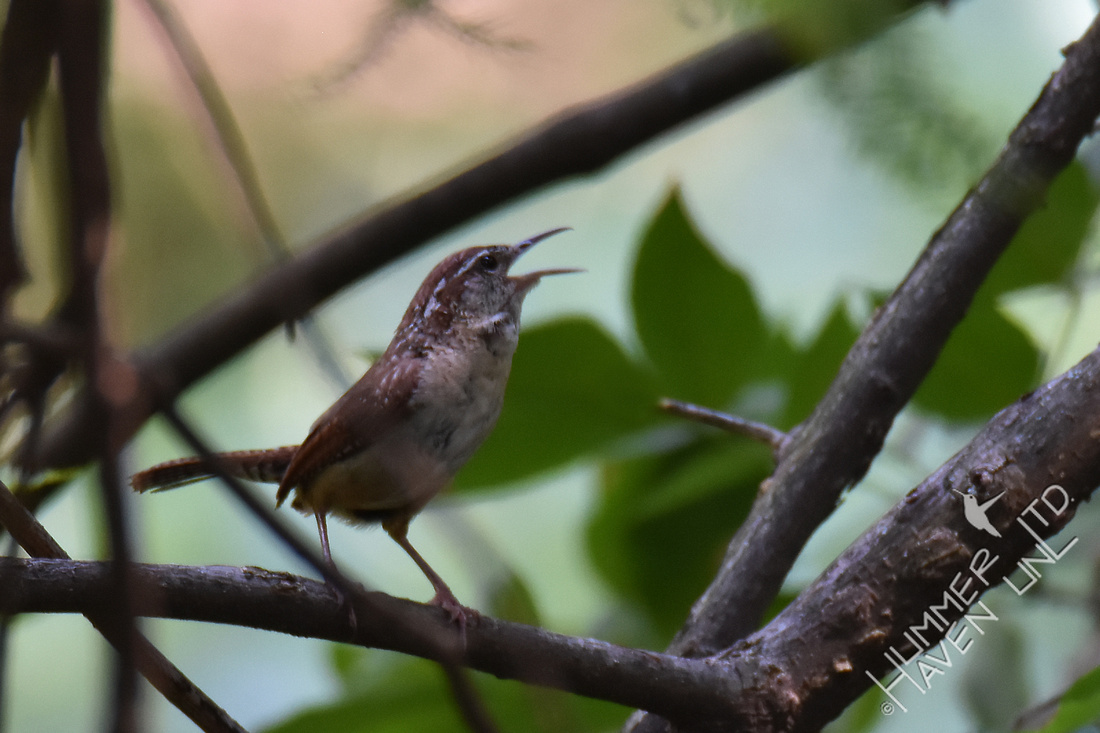 Then, the Coopers Hawk dropped in and stared down the wren.  The wren moved on but by then, the birds had heard and heeded the alarm. 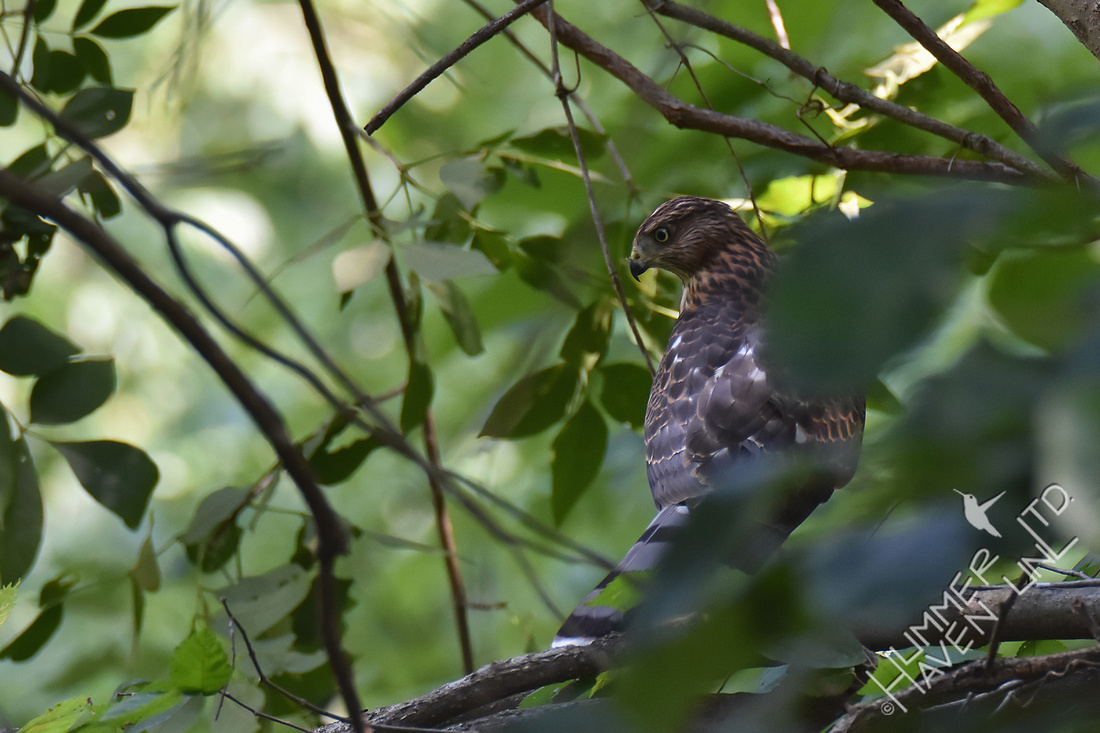 Before 7 a.m. on Friday morning, August 4, the twin fawns were in the woodland, grooming themselves.  I guess that's where they had spent the night.  Here is one of the fawns before they moved on. 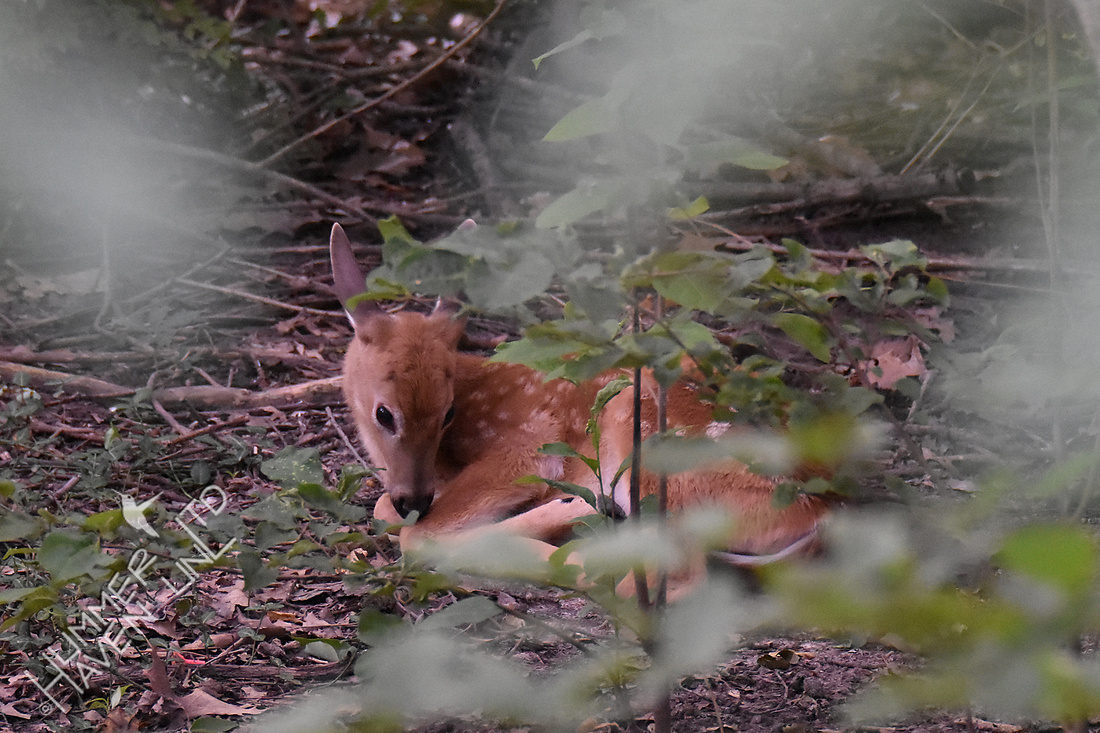 A black female Tiger Swallowtail has been in the garden the last few days. 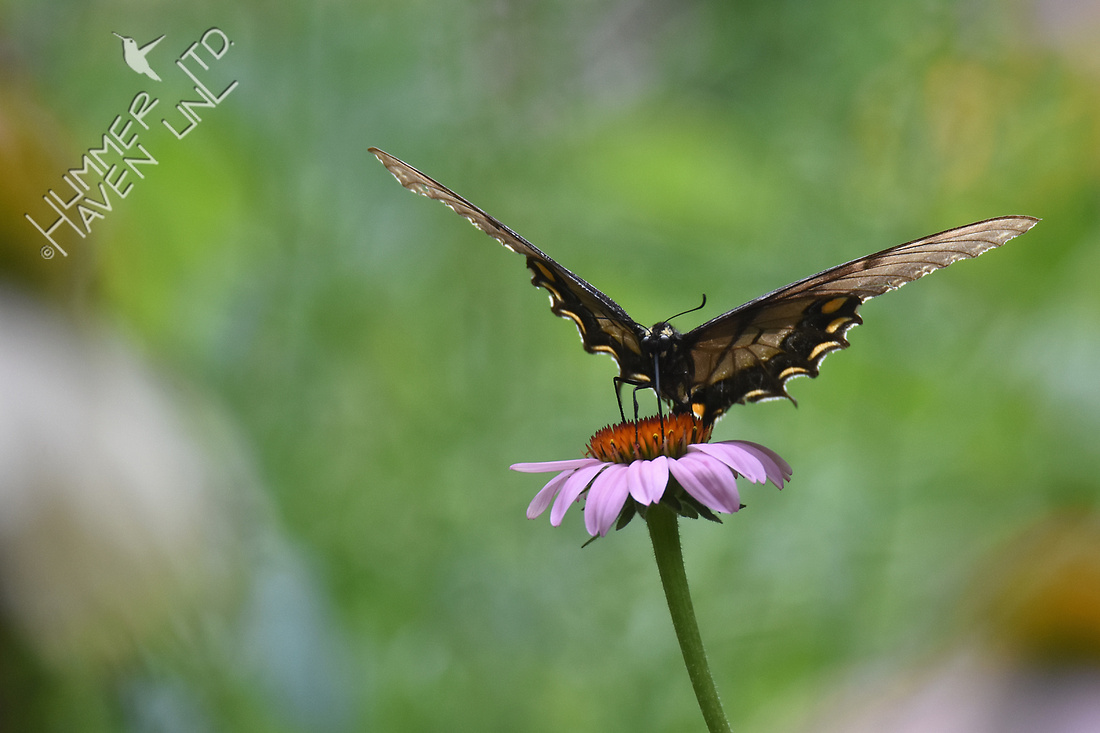 This afternoon, a male Monarch was very active on the Marsh Milkweed.  It was only when I finished going through the images that I saw a tiny Monarch caterpillar in this photo, too!  Can you find it?  The caterpillars are able to eat every part of the plant to grow into a healthy butterfly.  What a positive ending to the day! 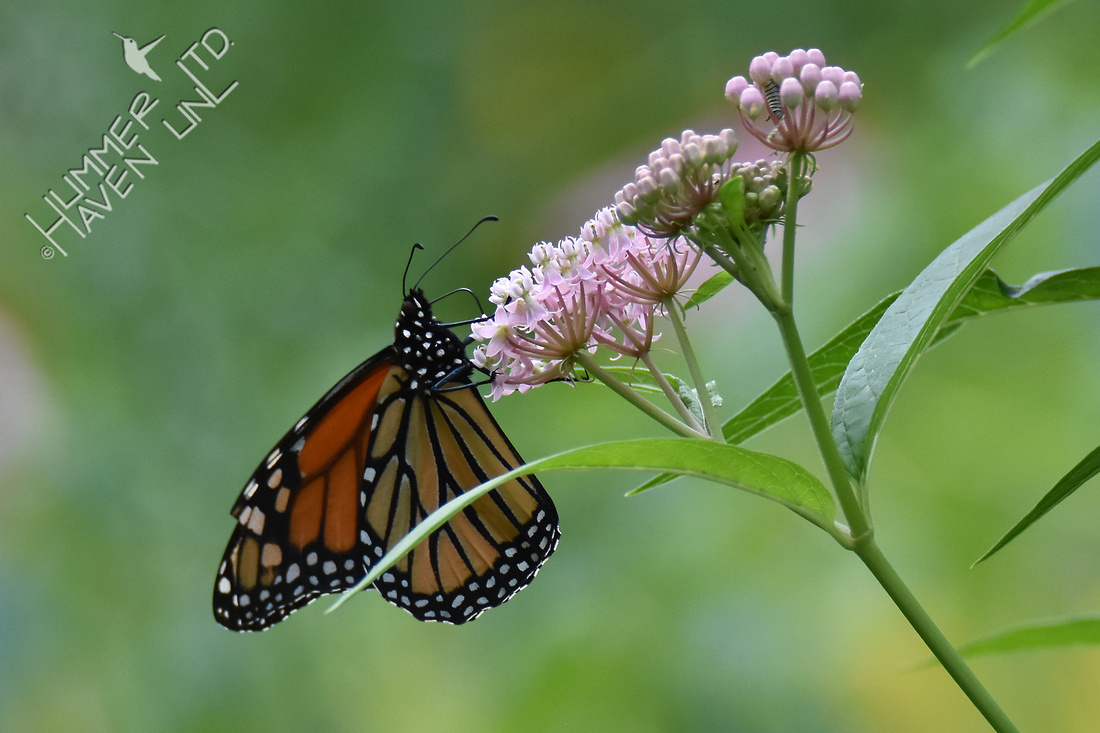 Hint:  Look in the cluster of buds on the far right for the tiny striped caterpillar.  Eggs were laid on Friday, July 28 so the caterpillar is 10 days old.