The summer brings evidence of new life with lots of mouths to feed.  I returned to the yard with the hummingbird nest on June 22.  The birds were very active and feeding well. 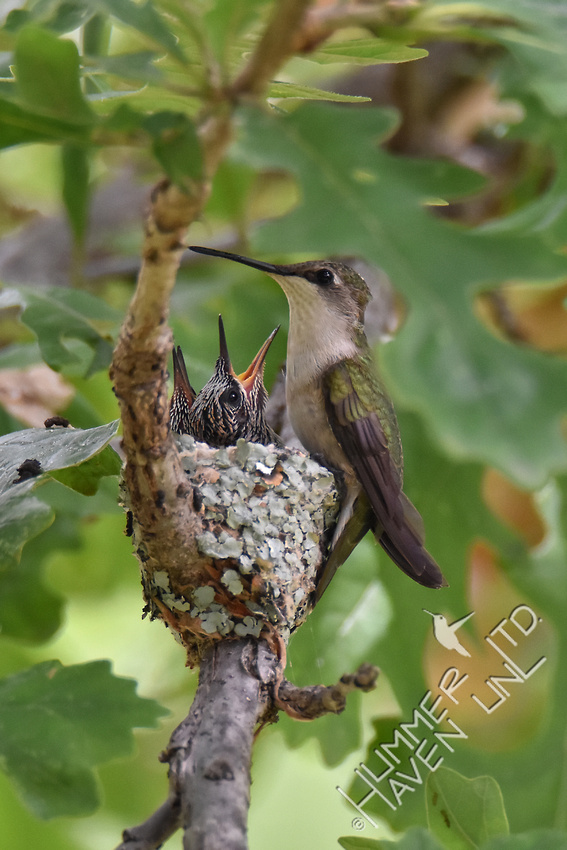 Due to some rain and windy conditions, I was not able to go back for five days.  The homeowner told me on that morning that the chicks were 'beating each other up' and one was exercising its wings vigorously on the edge of the nest with just a toe holding on.  When I arrived a couple hours later, both birds were apparently...gone. 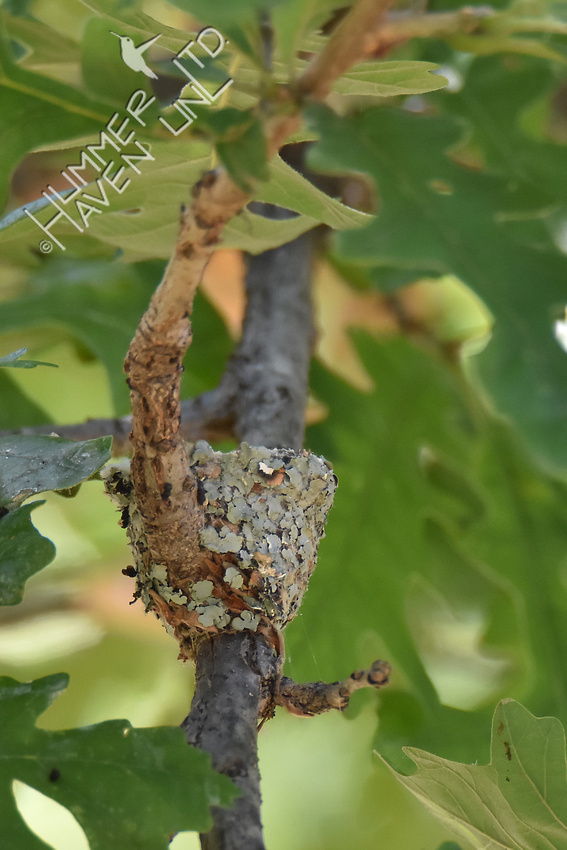 The female came in and seemed to be checking the nest.  The bird just rearranged some down and flew off, returned in a few minutes and did the same thing.  We listened for peeping and looked on other branches, but did not see the chicks anywhere. 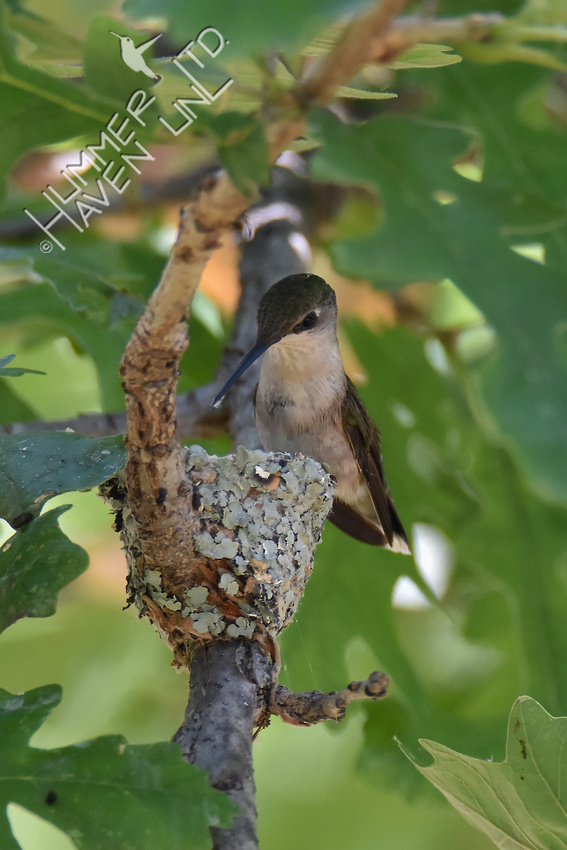 After a while, we confirmed that the nest was indeed empty.  By our calculations, it was day 15 but perhaps we were mistaken.  The earliest that chicks usually fledge is on day 18.  What happened to the birds is a mystery since no one witnessed their departure.  Young chicks are vulnerable and can become a meal for other larger birds, small mammals and even the larger non-native praying mantises.  We were left to hope for the best for these two little ruby-throats. 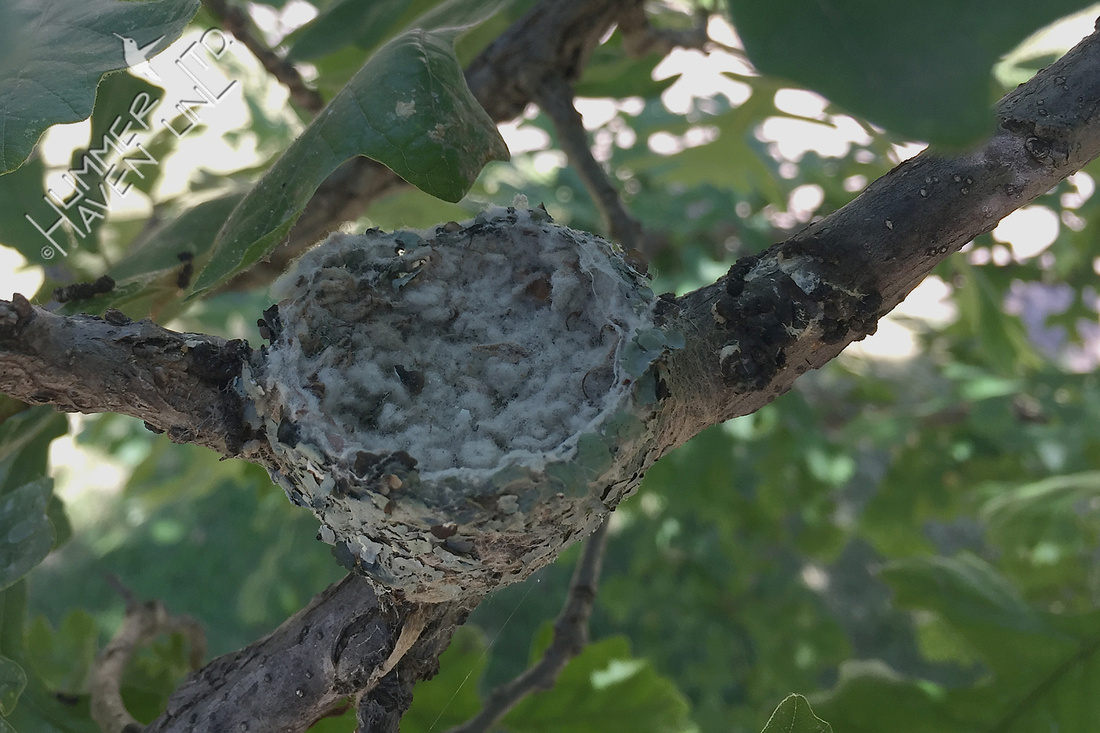 Back in our Shady Oaks yard, we're still seeing both male and female Ruby-throated Hummingbirds.  These two males were tanking up one afternoon, sharing somewhat tentatively at the same feeder. 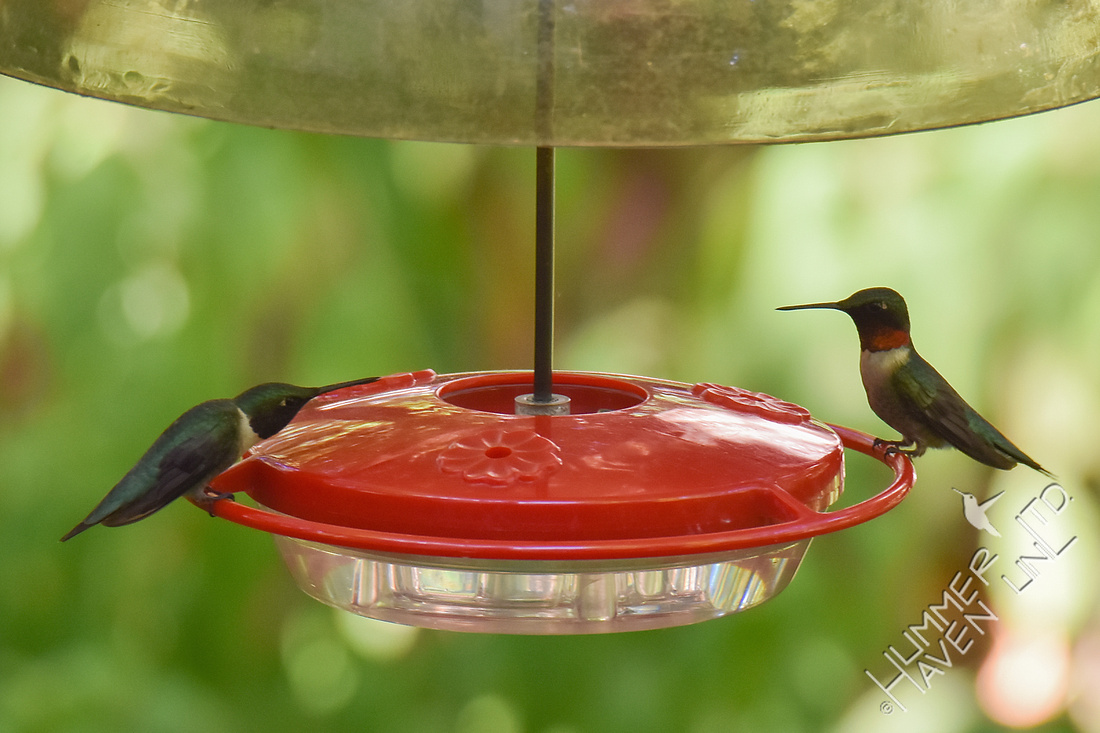 A young American Robin enjoyed the dripper bath on a hot day.  It has been a very popular place. 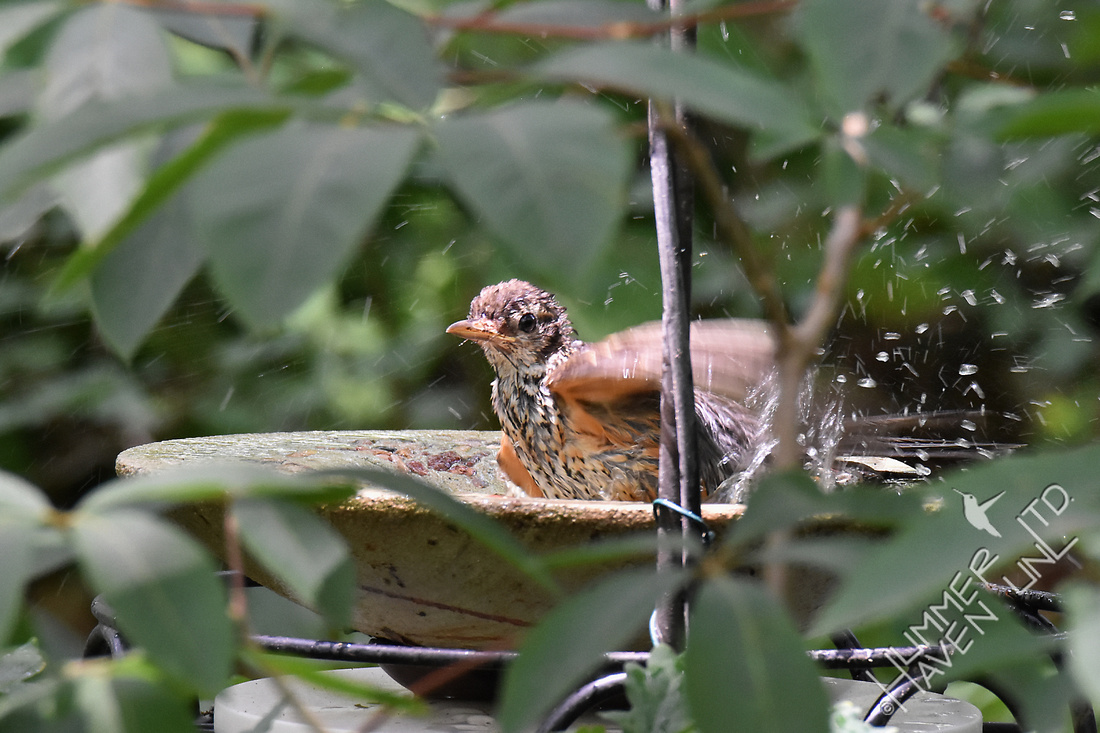 This Eastern Wood Pewee was fly-catching right off the deck around noon on June 29.  I could hear it calling over my head later as I weeded on the path to the Bubbler. It might still be feeding young. 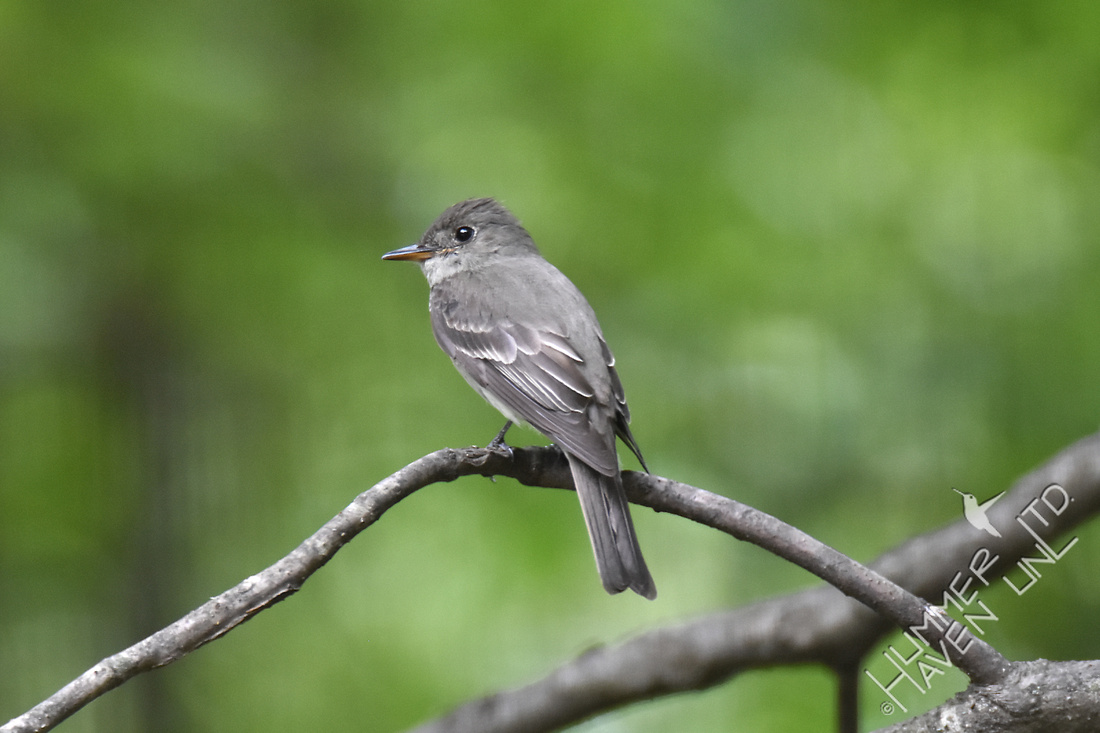 On Monday, June 26, this Northern Cardinal found an annual cicada to pre-digest for its brood. 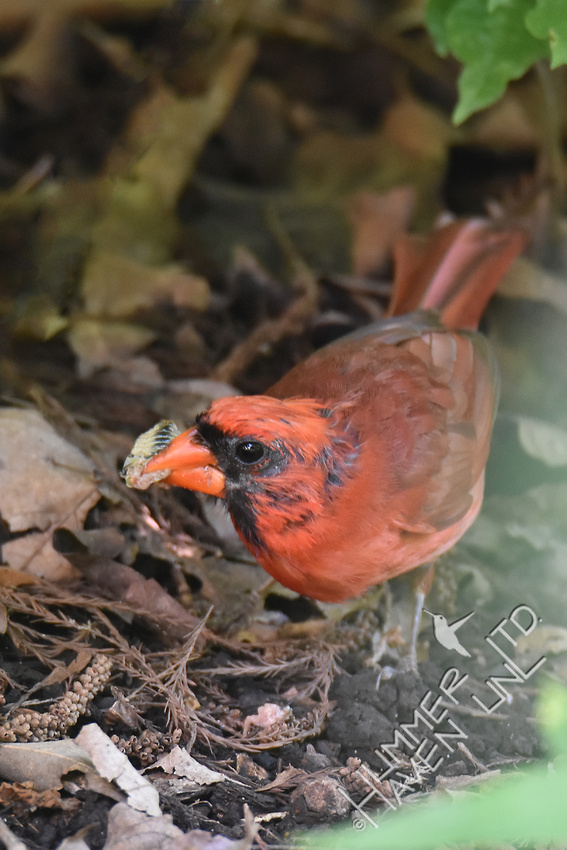 It flew to the nearby viburnum then across the pond and up to its nest. 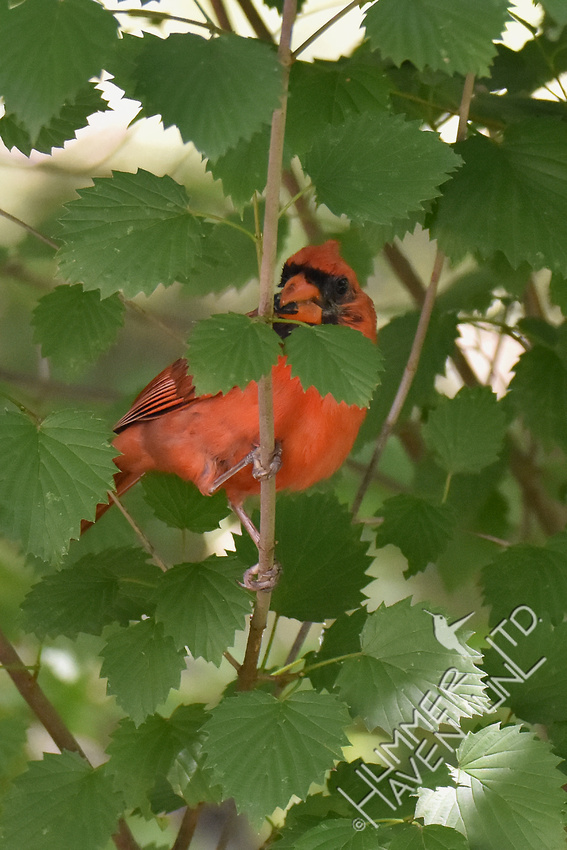 I think it's in this area, it is so well concealed in the Coral Trumpet Honeysuckle (Lonicera sempervirens) on the arbor. 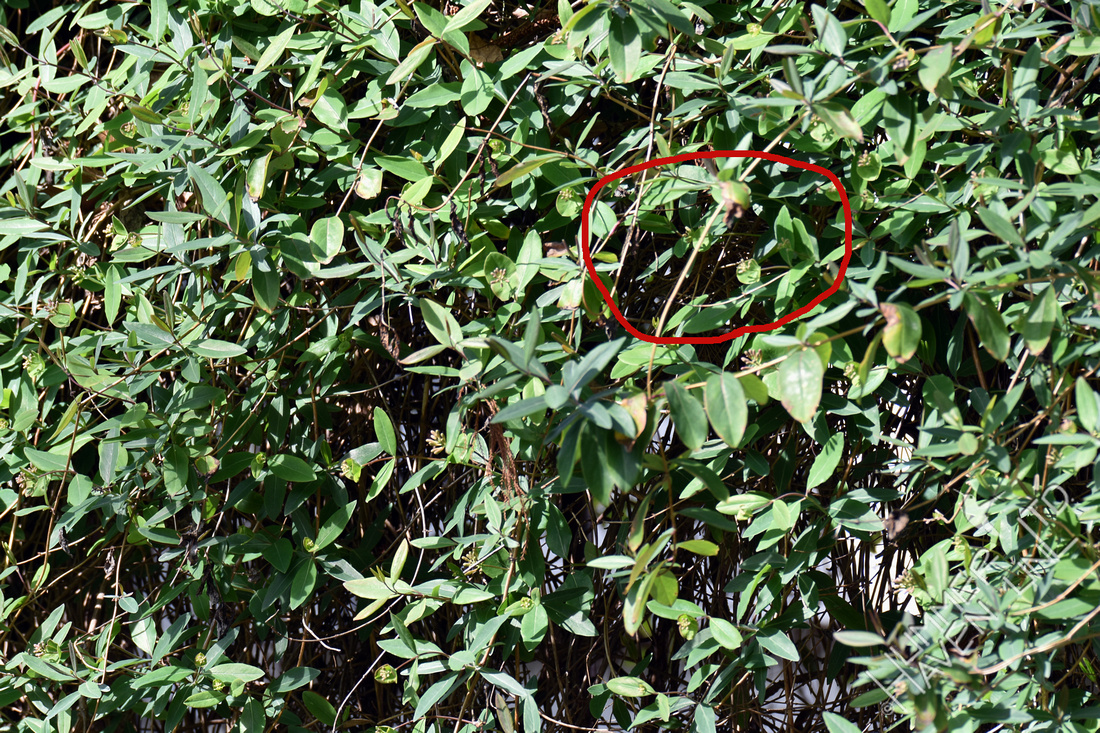 We had been hearing the chicks peeping while we were in the gazebo having a few meals.  The 4th of July became Independence Day for the chicks!  This one flew from the viburnum about 25 feet to the cypress!  Wide-eyed, it was taking in this big new world as the male brought in a morsel and gently fed it. 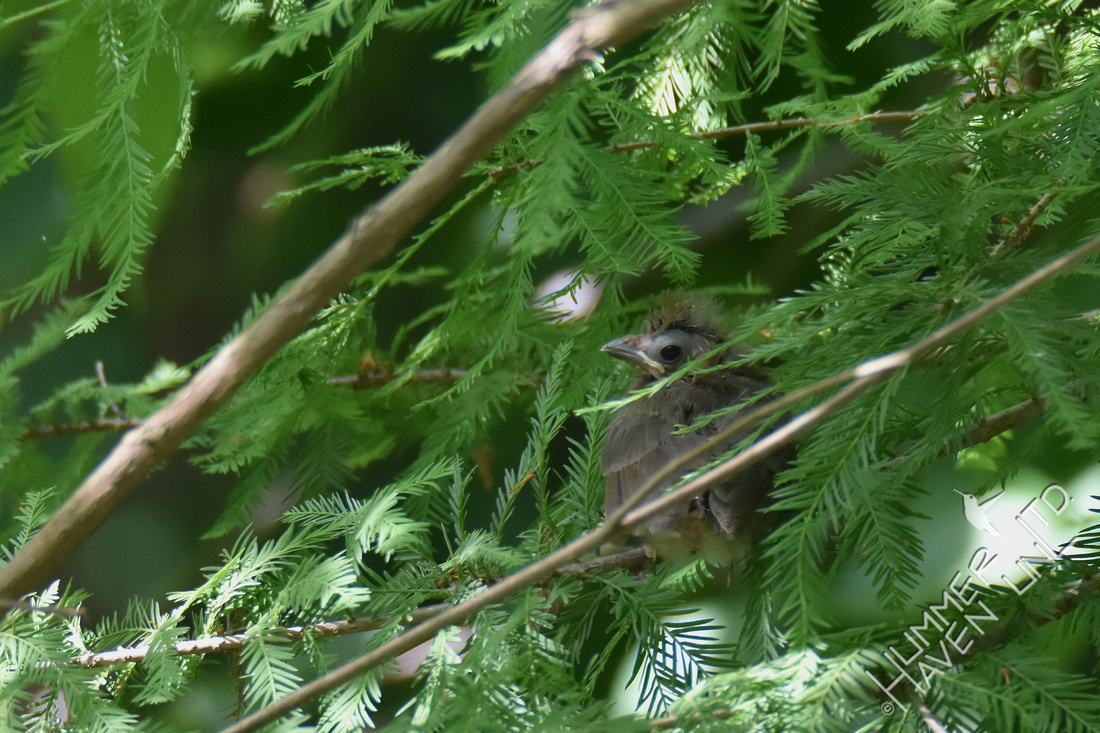 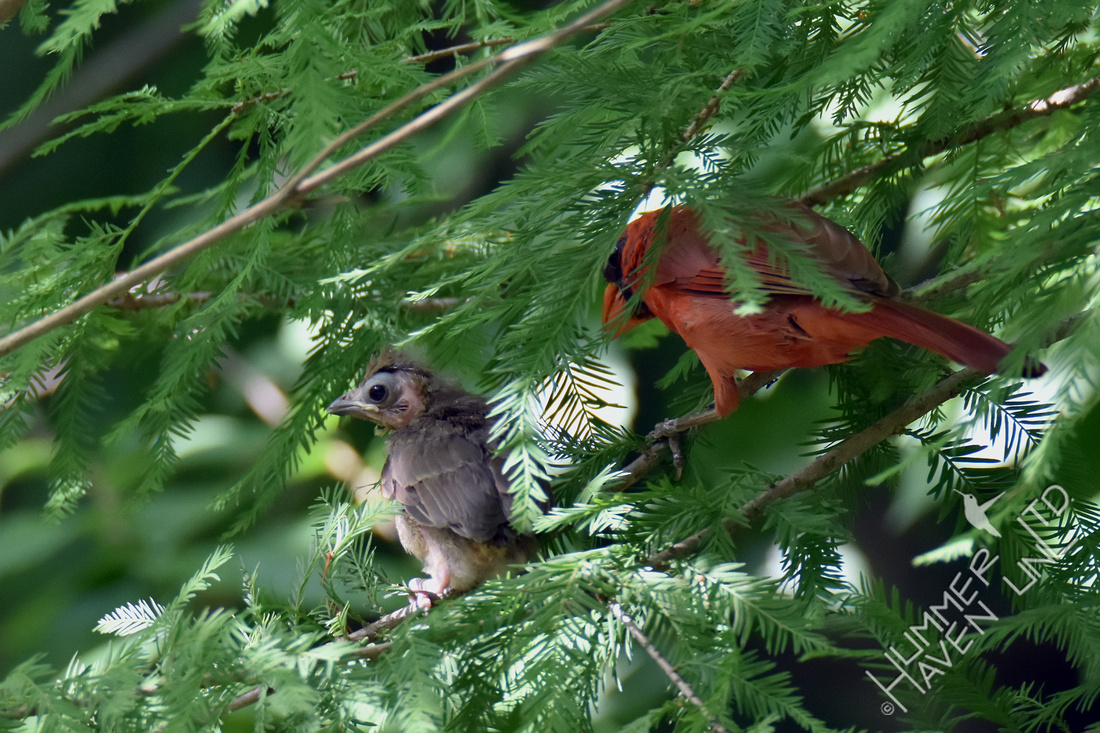 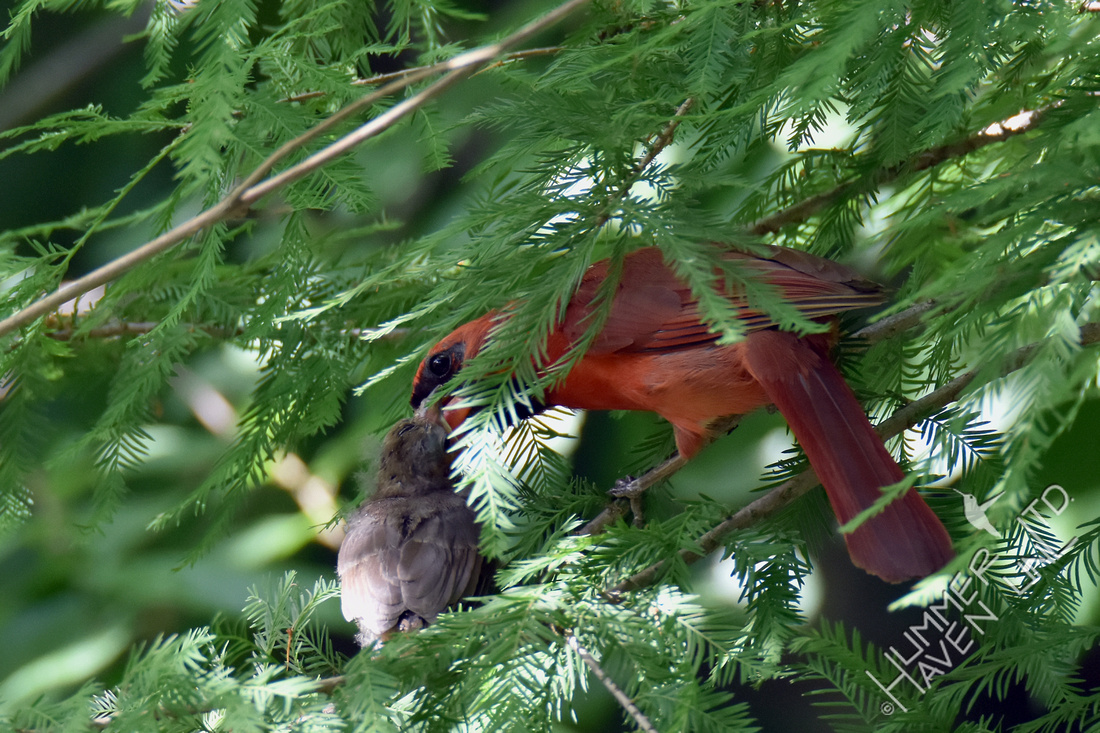 The woodpecker group has had a good spring, too.  This young Red-bellied Woodpecker has already been in the Bubbler Basin to bathe. 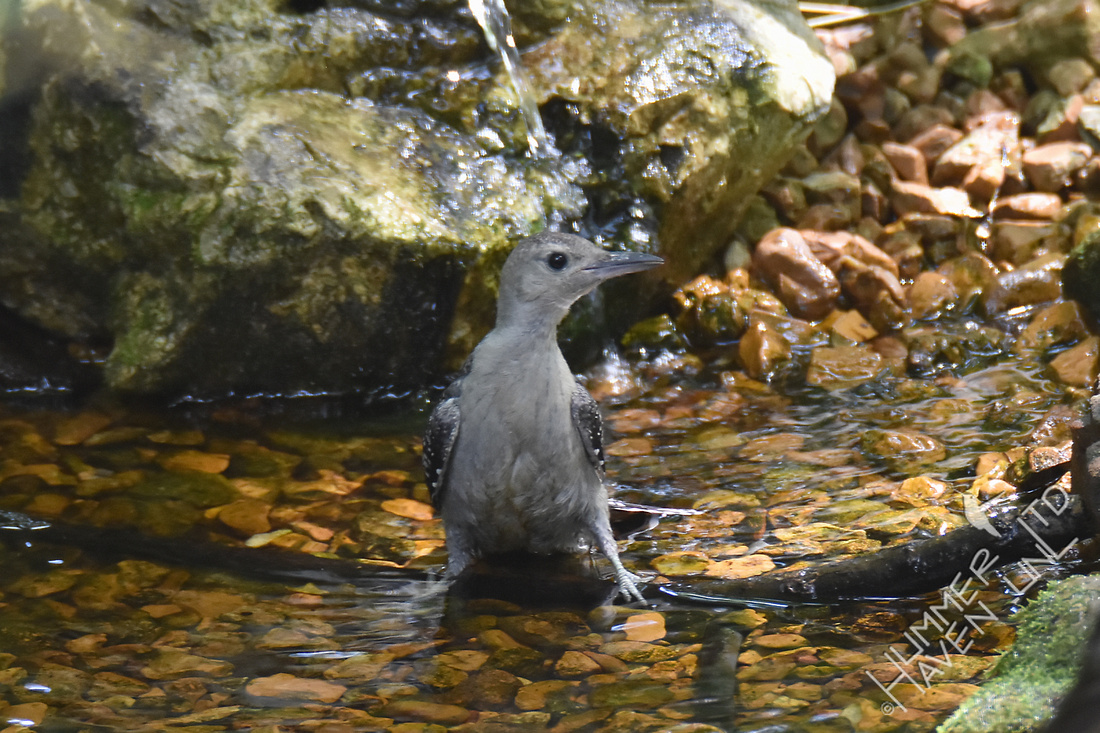 Baby birds of all sizes certainly look like their prehistoric ancestors! 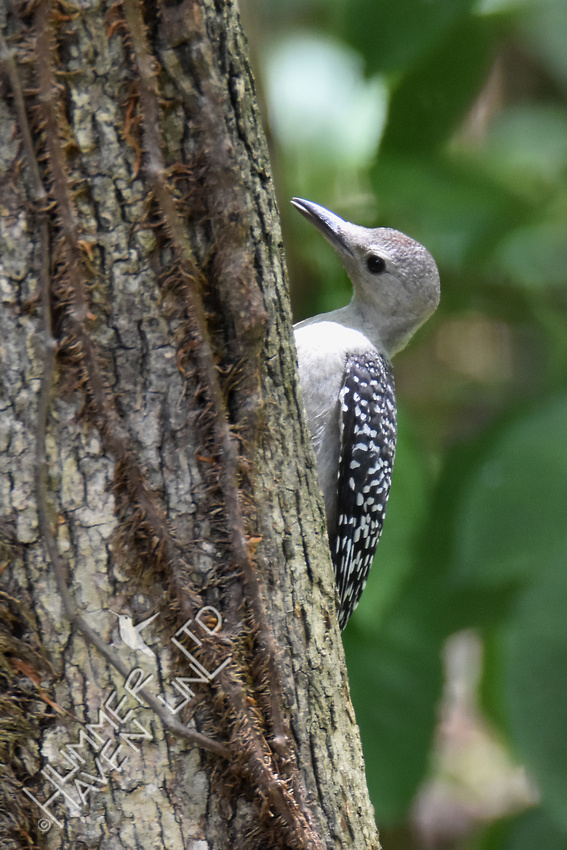 The Downy Woodpeckers have at least one young bird that is on its own now.  The juveniles have red on the tops of their heads for quite a while. 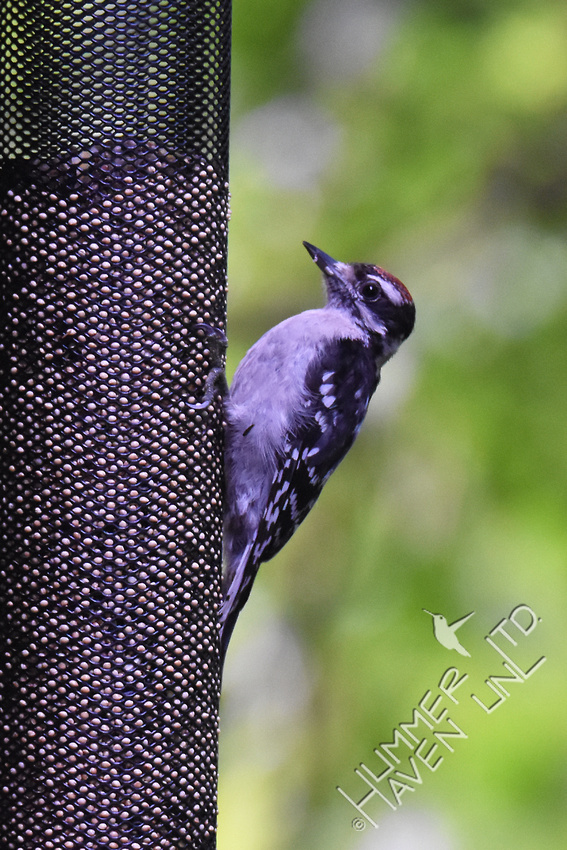 Pollinators have been busy in the garden.  An unidentified fly was attracted to the Leather Flower vine (Clematis versicolor). 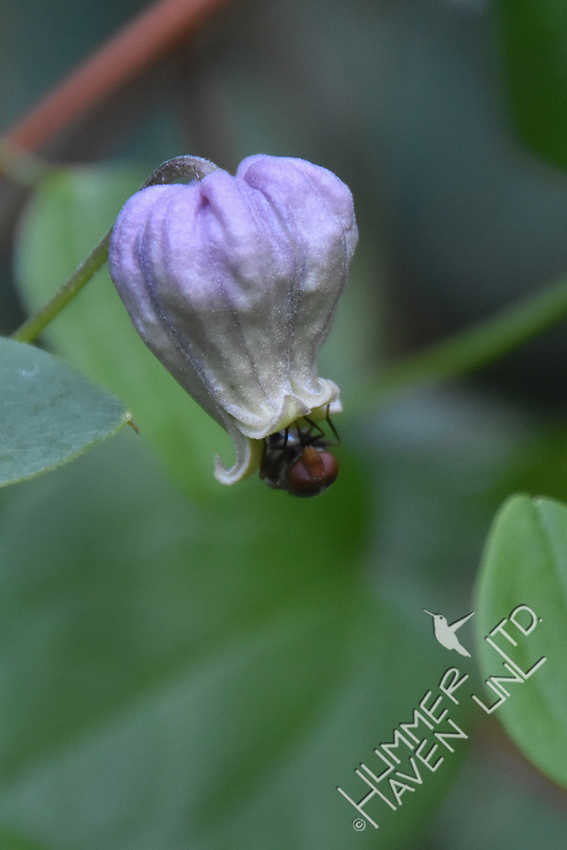 Honeybees and bumblebees have been all over the 'White Dome' Hydrangea nativar (Hydrangea arborescens x White Dome). 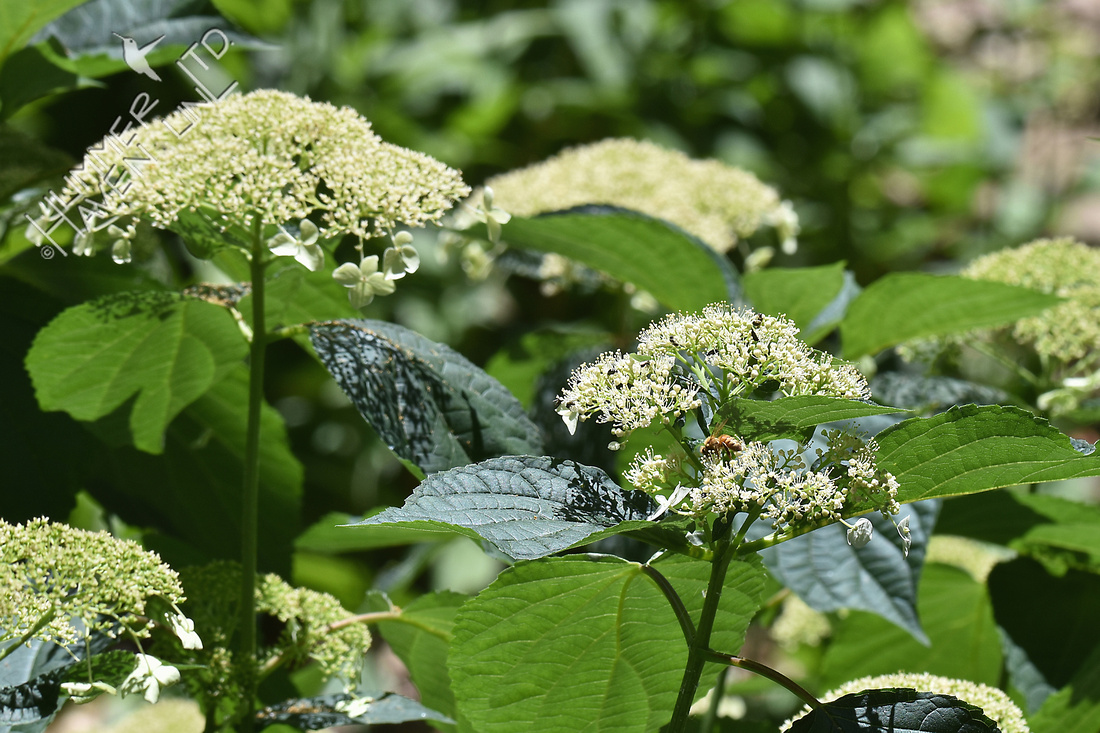 The lacily frilled Wild Bergamot or native Beebalm (Monarda fistulosa) is very attractive to bees, too. 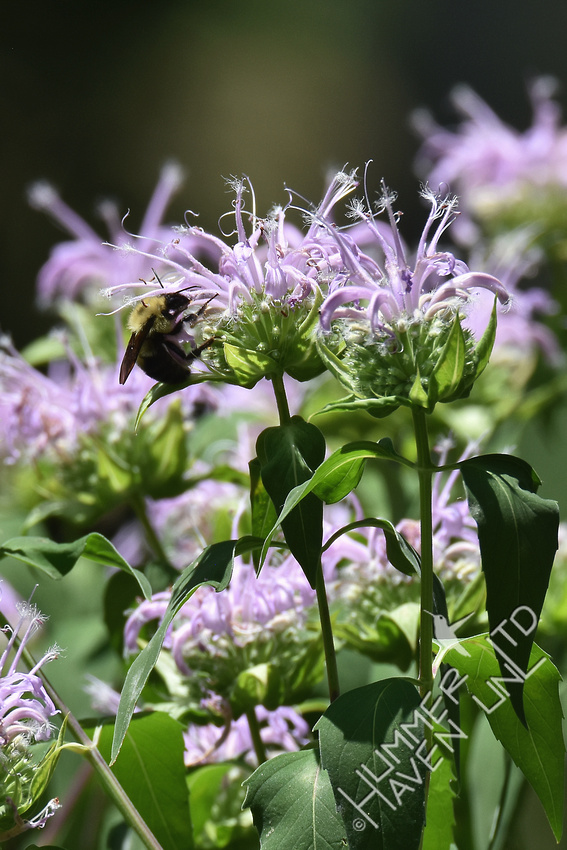 Buttonbush (Cephalanthus occidentalis) brings in all kinds of pollinators, including Eastern Tiger Swallowtails. 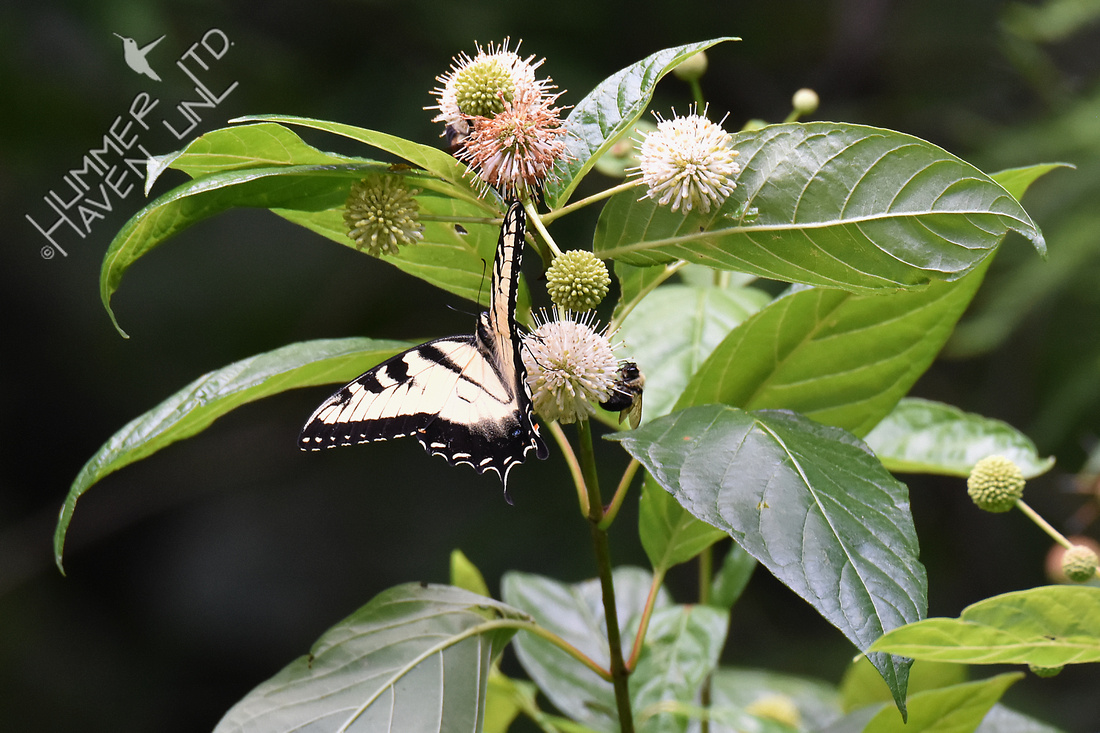 A species of dragonfly newly identified in our yard is this Swamp Darner, a female.  Typical to its description, it was in the shade hanging out on the moisture-loving Buttonbush (Cephalanthus occidentalis). 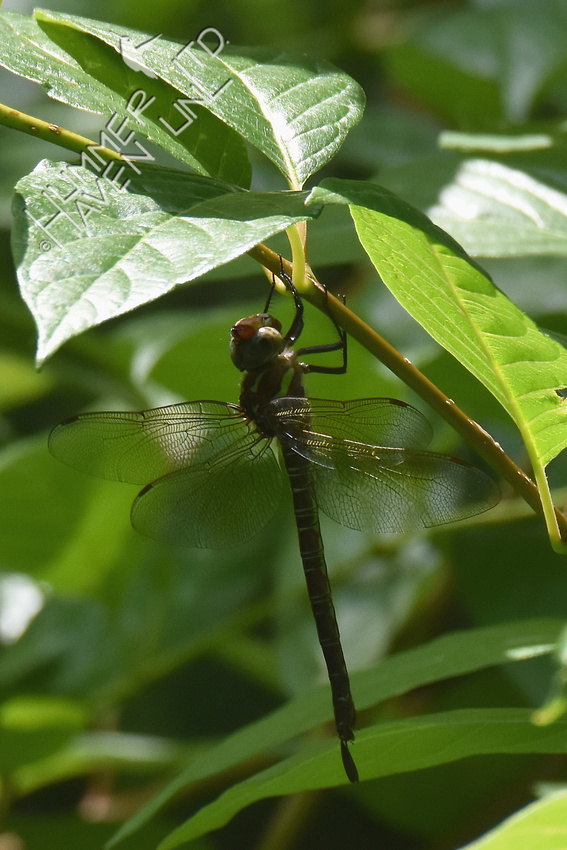 This is the second year that we've seen the beautiful damselfly named the Ebony Jewelwing.  It likes to land on plants near the riffles in the stream bed like the Virginia Creeper (Parthenocissus quinquefolia) and then retire to trees to rest overnight. 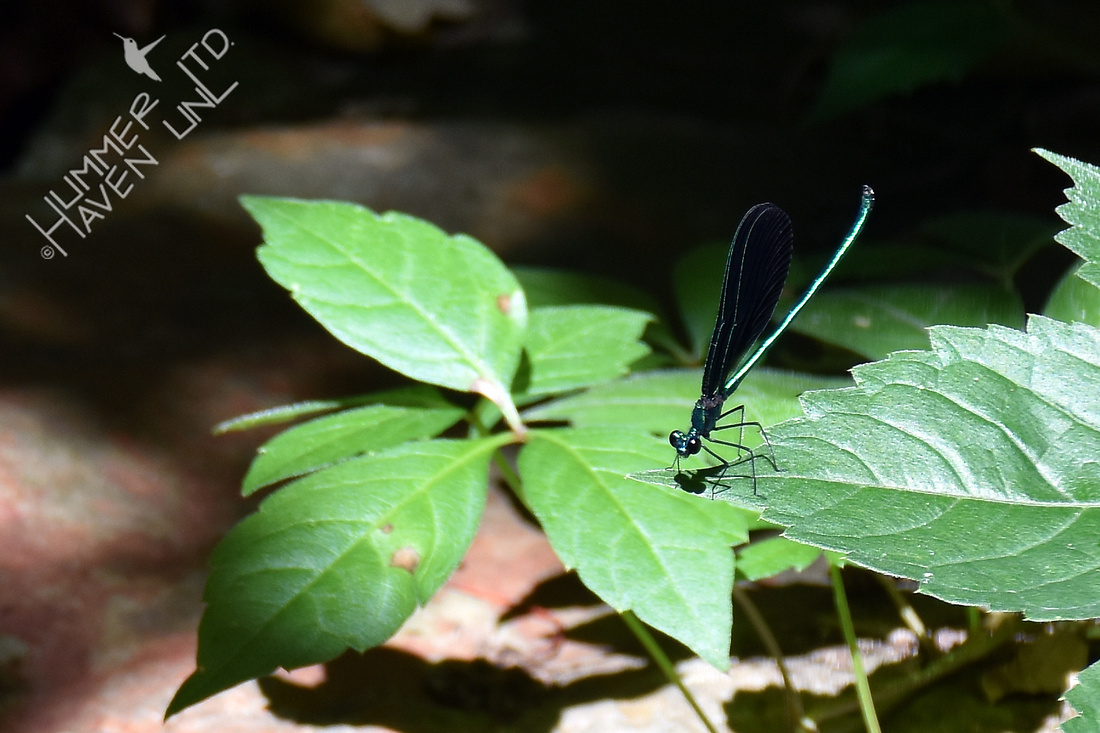 The Familiar Bluets were found mating in the stream bed.  I've already seen some of their young tenerals nearby. 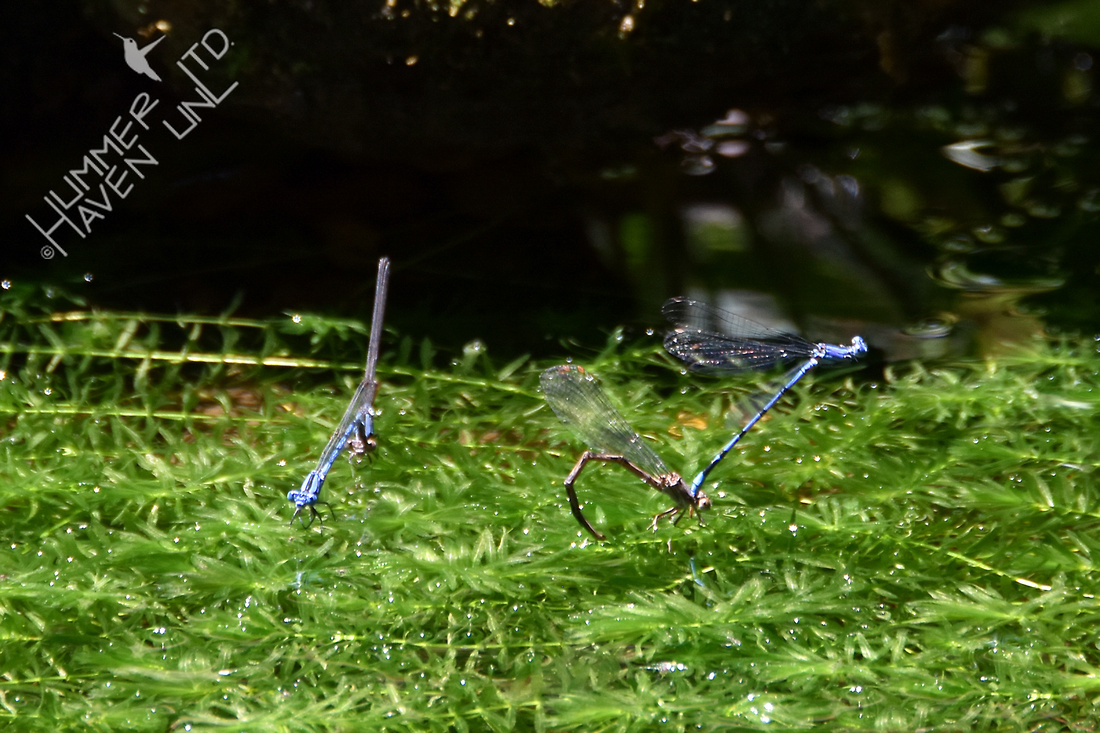 Today, I saw at least 4 Blue Dashers chasing each other about the pond and displaying to each other.  This one shows the 'obelisk position'. 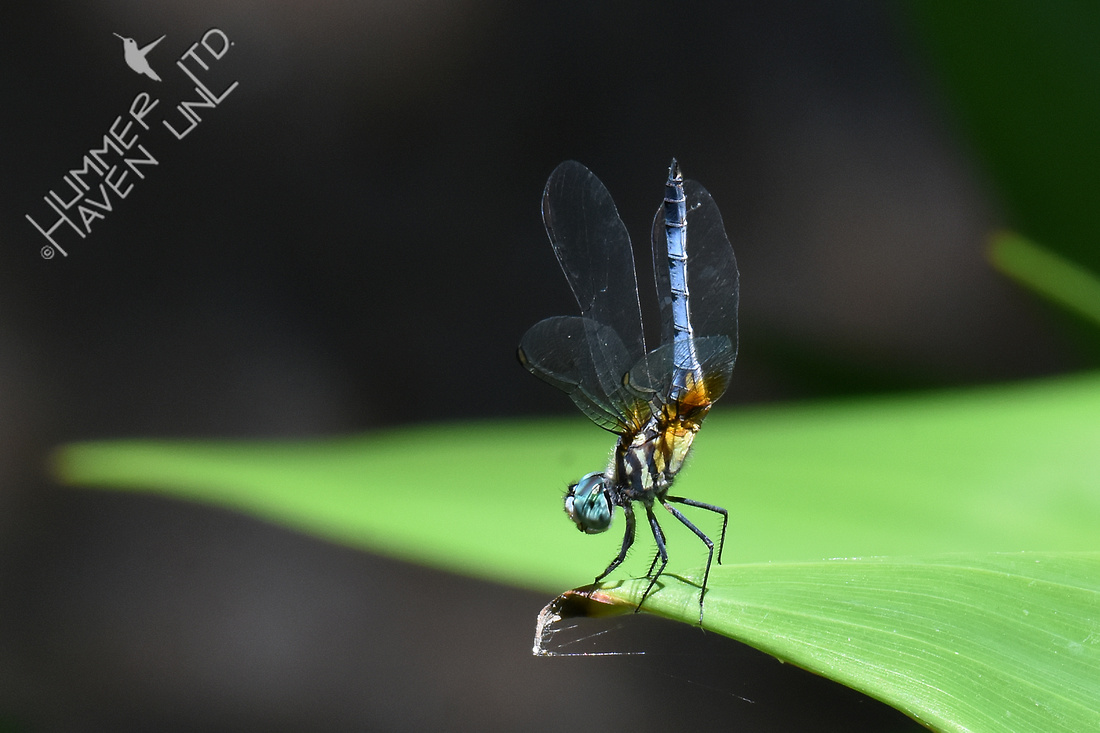 More babes to come, no doubt about it!