Migration is happening in fits, starts and dribbles here.  The winds were favorable from the south for a few days and then turned so the birds seemed to be circling the neighborhood.  Action at the bubbler has been less after the rains, but we need the rain so I won't complain.  Still, a few birds have shown themselves this last week of April.

Dan saw our first two Ruby-throated Hummingbirds on Friday night, April 15.  I was able to catch one at the feeder near me on Thursday. 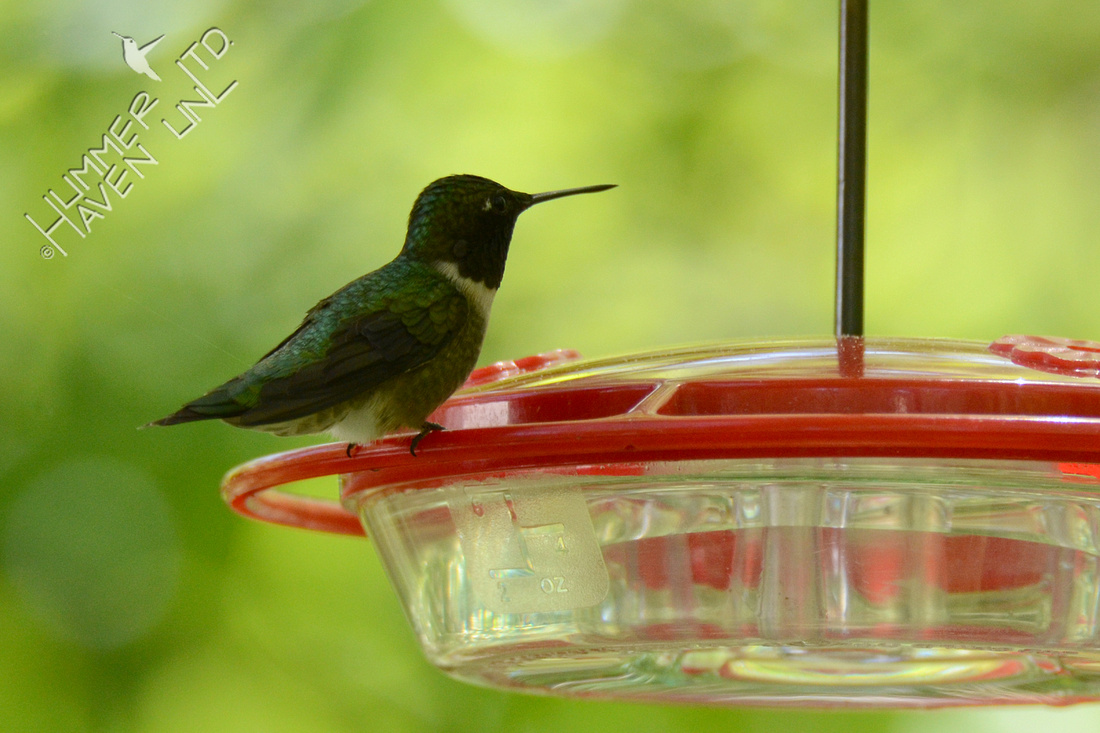 Another gorgeous migrant is the Scarlet Tanager.  This male stayed in the trees, feeding on Thursday afternoon. 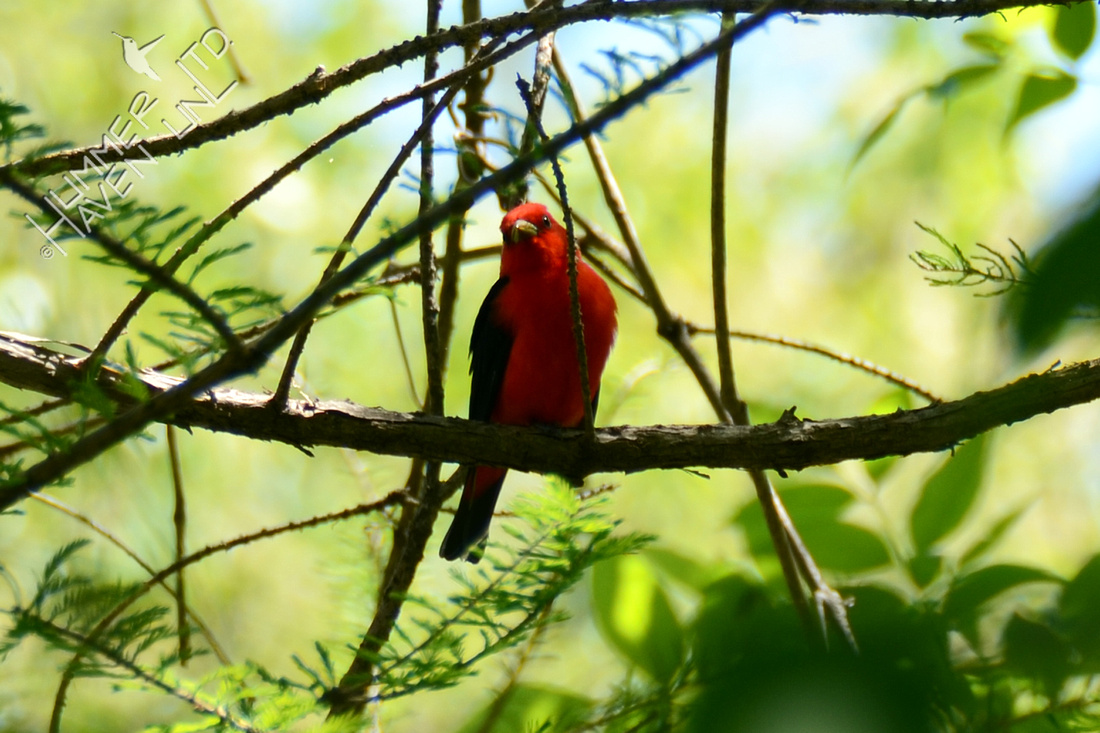 A Red-eyed Vireo came to the bubbler area that same day and splash-bathed early.  It returned to pose a bit later. 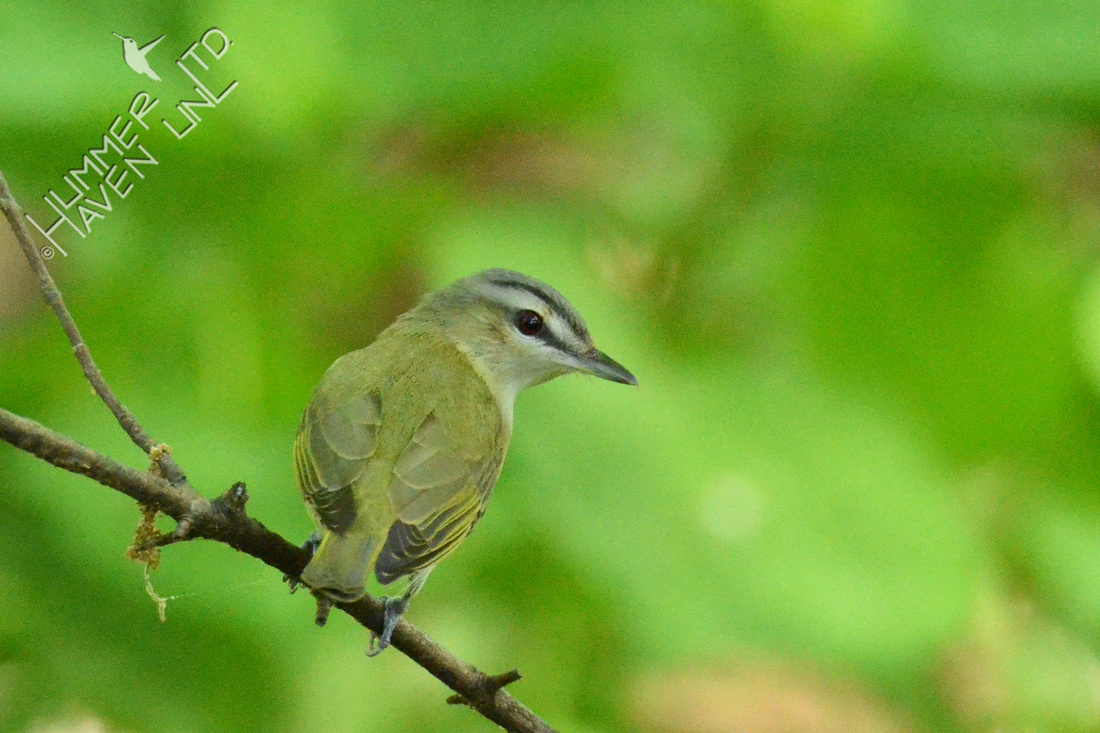 Gray-cheeked Thrushes have returned and like all thrushes, they love to get in the water. 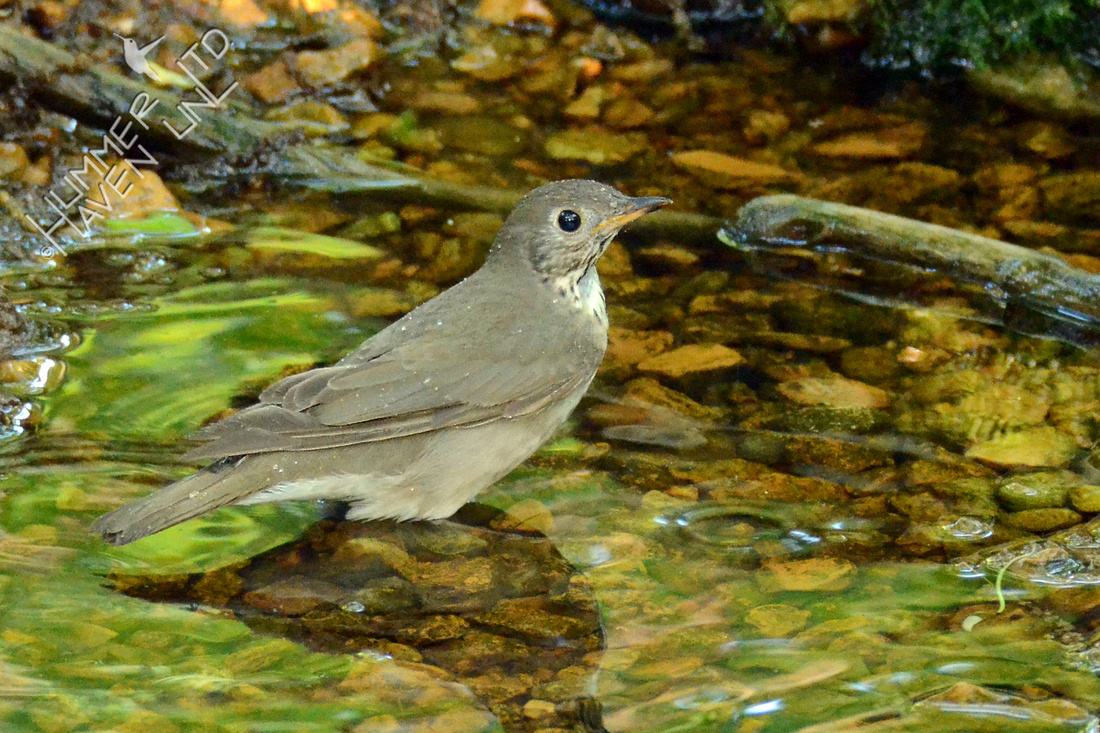 The Swainson's Thrushes are in the woods and one can hear their sharp 'whit' calls bounce from one bird to another like ping pong balls. 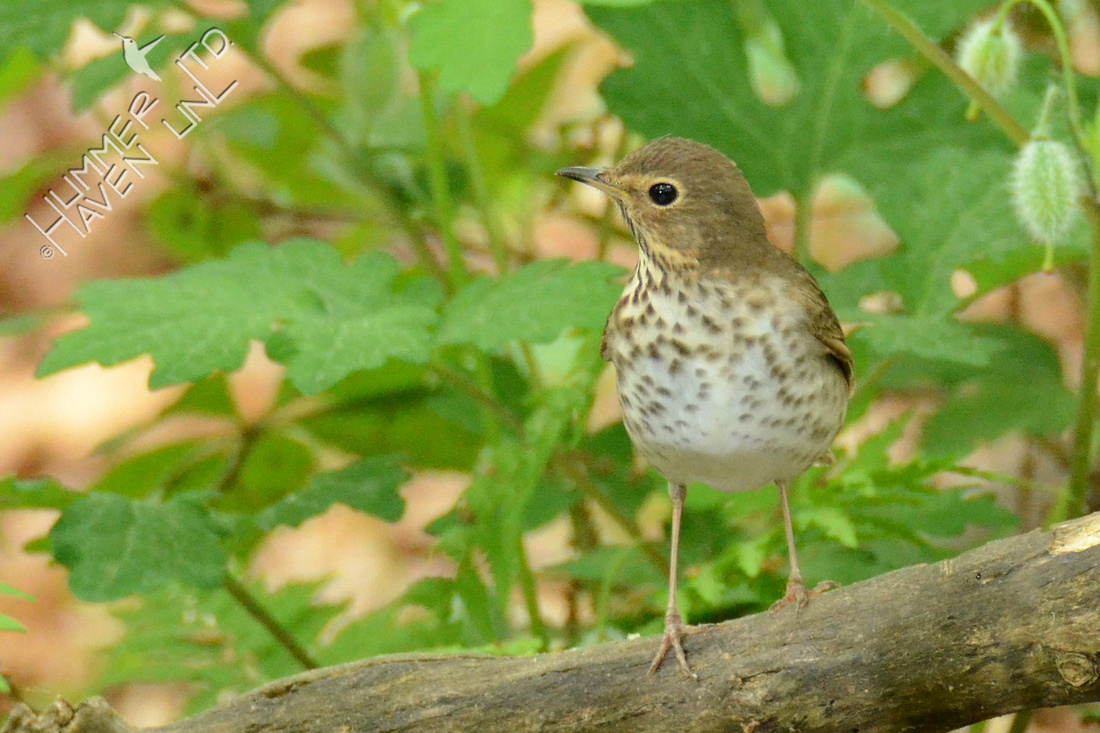 Yellow-rumped Warblers still come to the bubbler every day, if only to look.  They certainly are pretty little birds. 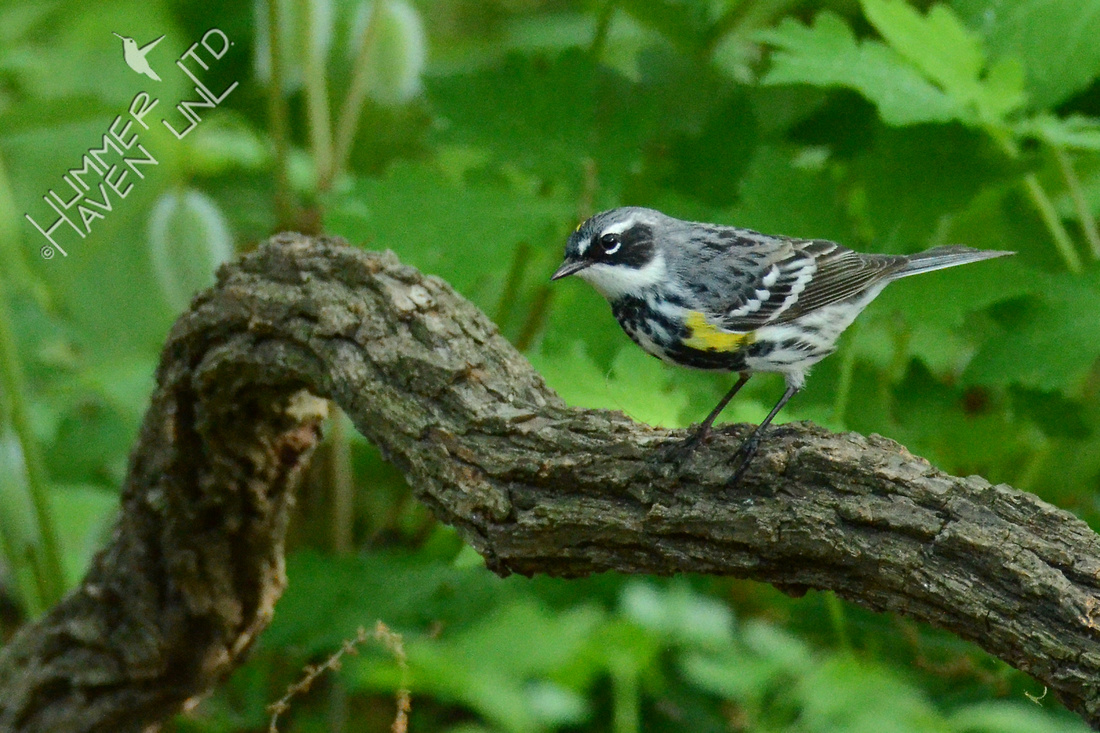 The Carolina Chickadees were still feeding their nestlings on Friday.  They must be huge by now at the rate they've been fed!  One of the parents found a caterpillar on the Virginia Creeper to take to them. 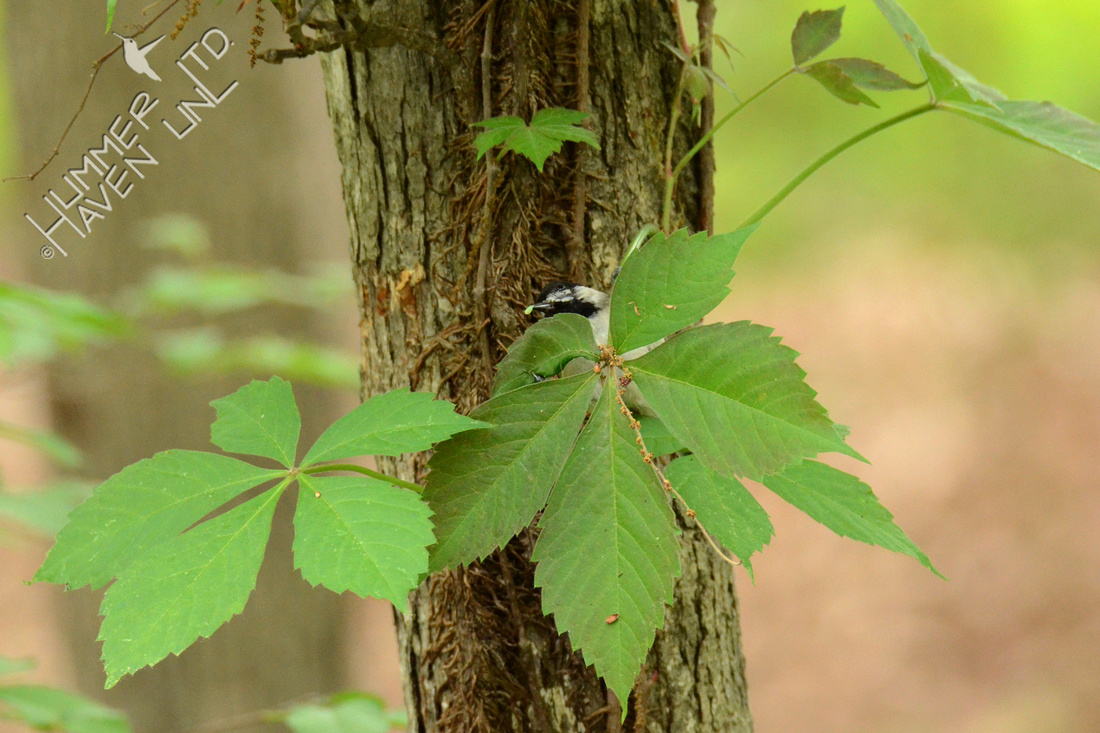 I stood out in the rain this morning to watch and listen.  The Chickadees must have fledged and left the nest box before I even got outside.

One of the foxes has been seen several times in the last week or so.  I went out early last Sunday morning to turn on the dripper at a small birdbath in the east bed.  I heard movement in the bed behind me and there was the fox, trotting through the bed and onto the path.  It turned left towards me and then right as it continued south along the edge of the garden.  It still looks to be quite healthy.  Here is that clip in between two night-time clips from the bubbler cam.

Other arrivals this week have been Indigo Buntings, Summer Tanagers, Black-throated Green Warblers, Veery, Gray Catbird and Eastern Wood Pewee.  The Gray Catbird was feeding in the swale at the south property line this afternoon. 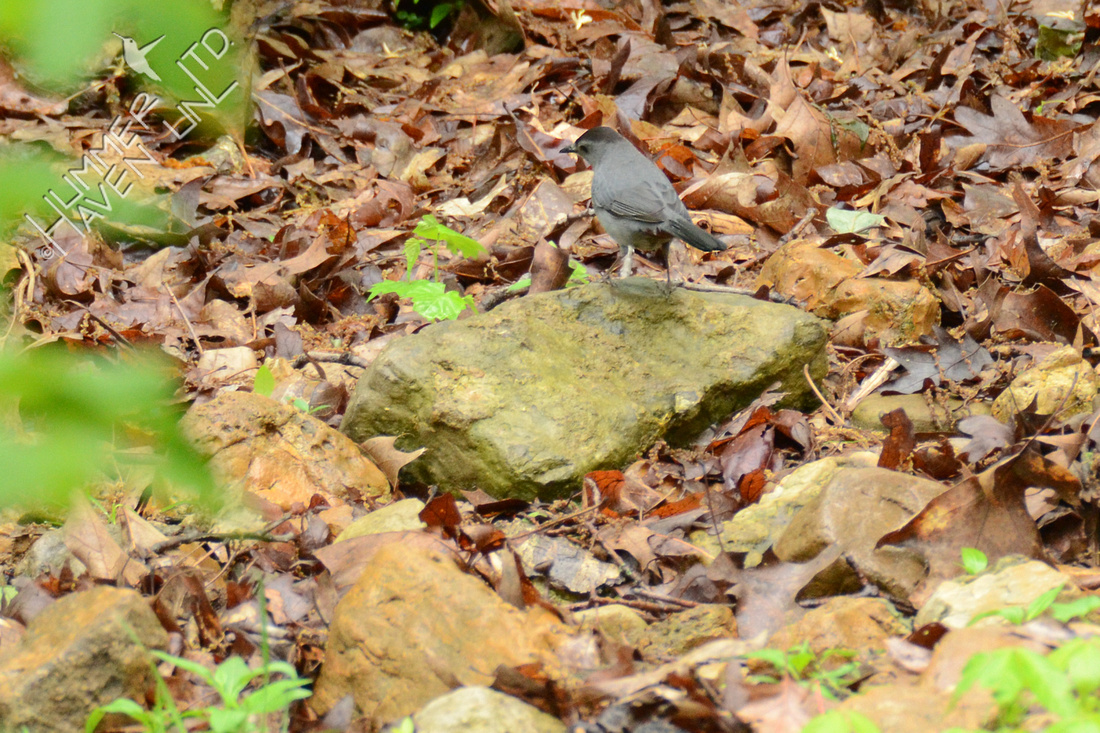 I wasn't outside too long before another strong thunderstorm built up, dumping hail in loud measure and tearing leaves to shreds.  The temperature dropped over ten degrees quickly. 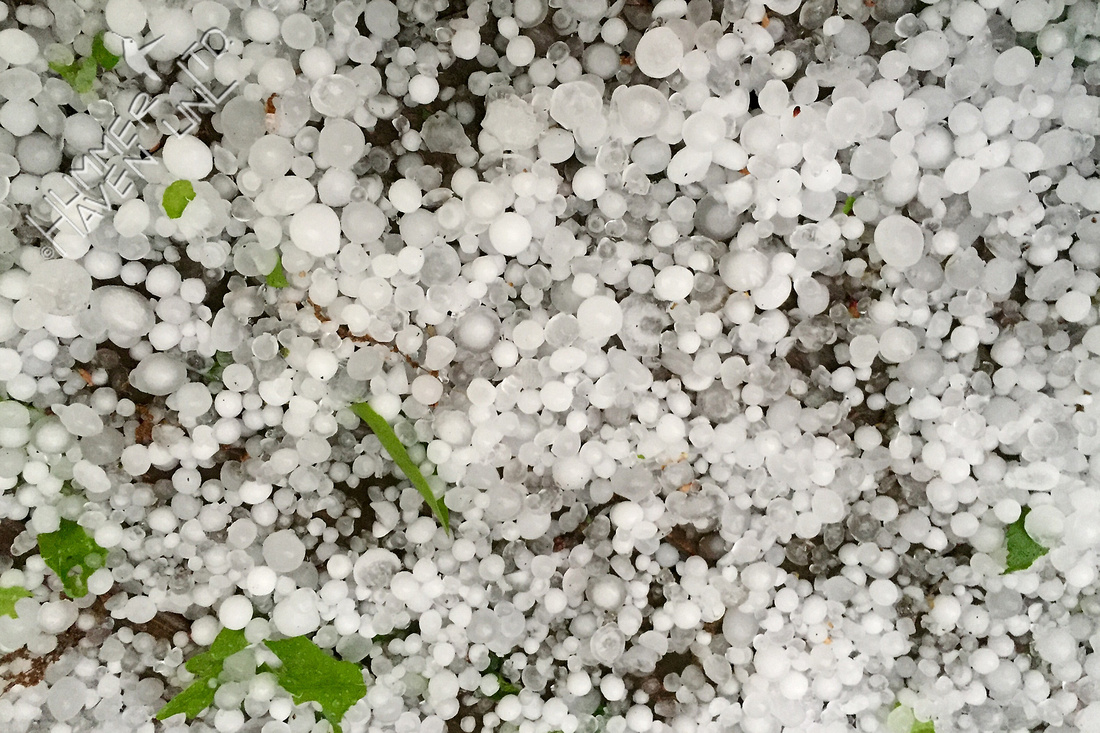 I hope the weather calms down.  More birds are on the way, it could get pretty interesting in the next couple weeks!

Arlene Frossard(non-registered)
I was wondering when the humming birds would arrive! I've had my feeders out for a week or so, but no takers. At least I know they are in the area. Your film of the foxes is great!
No comments posted.
Loading...
Subscribe
RSS
Recent Posts
More birds of May 5-17-22 First week of May, 5-8-22 Migrants are on the move! 4-30-22 Mid-April updates 4-17-22 Into April now 4-7-22 Signs of Spring 3-27-22 SPRING FORWARD! 3-13-22 Into March 3-9-22 February has flown by! 2-28-22 Into February 2-10-22
Keywords
bubbler pond rusty blackbird mink fox Tanager bluebird basin warblers Purple Finch
Archive
January February March April May June July August September October November December
© Hummer Haven UnLtd.
Powered by ZENFOLIO User Agreement
Cancel
Continue