Yesterday was 'Fall Back' Sunday. We've lost 4 hours and 11 minutes of daylight since the Summer Solstice, by my reckoning. Dan spotted the first young white-tailed buck of November as it walked through the woodland at 7 a.m. and it was chilly at 37 degrees. It finally felt like November.

We have had visitors this week. Ruby-crowned Kinglets and Orange-crowned Warblers were still around on Wednesday with the record warmth. Their dull fall plumage provided camouflage as they blended in with the gray bark and yellowing ribbed leaves of these young American elms (Ulmus americana). 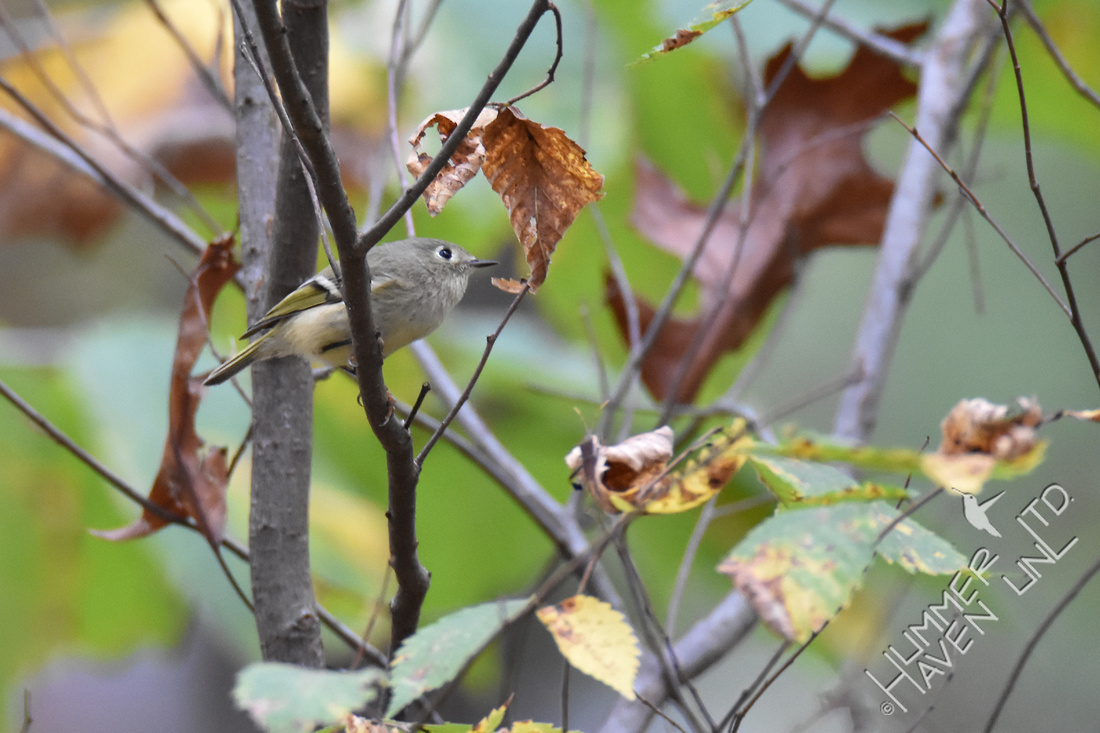 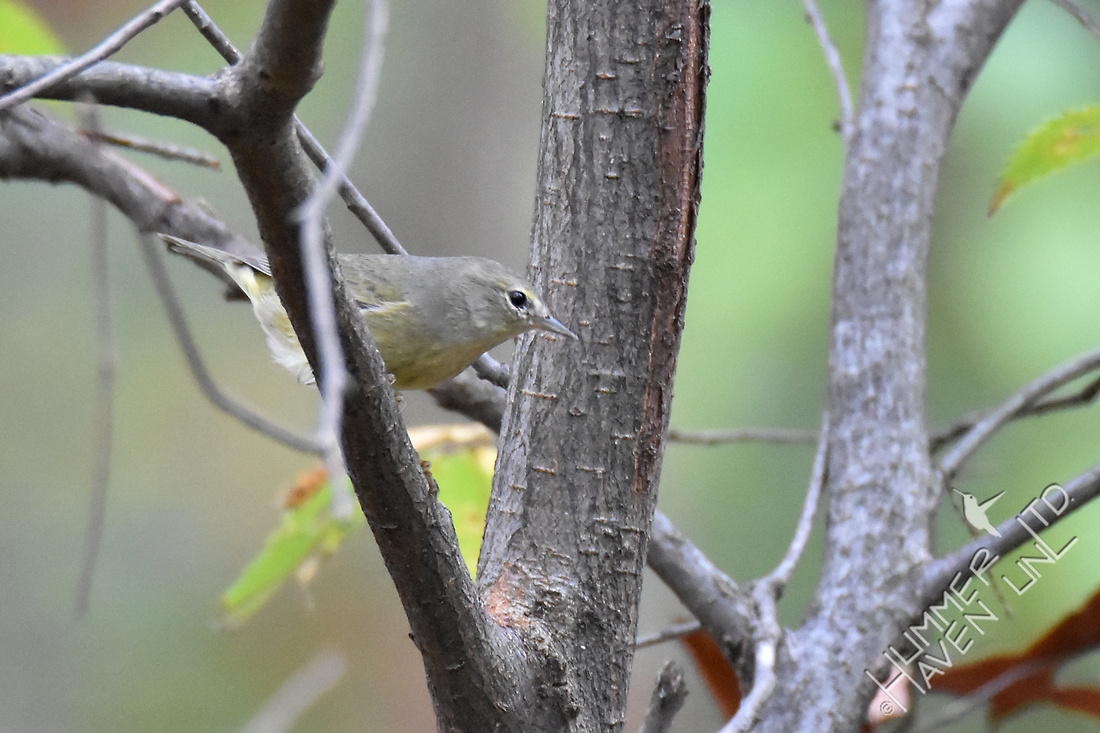 A bit of the orangish crown was visible on this warbler once it got wet! 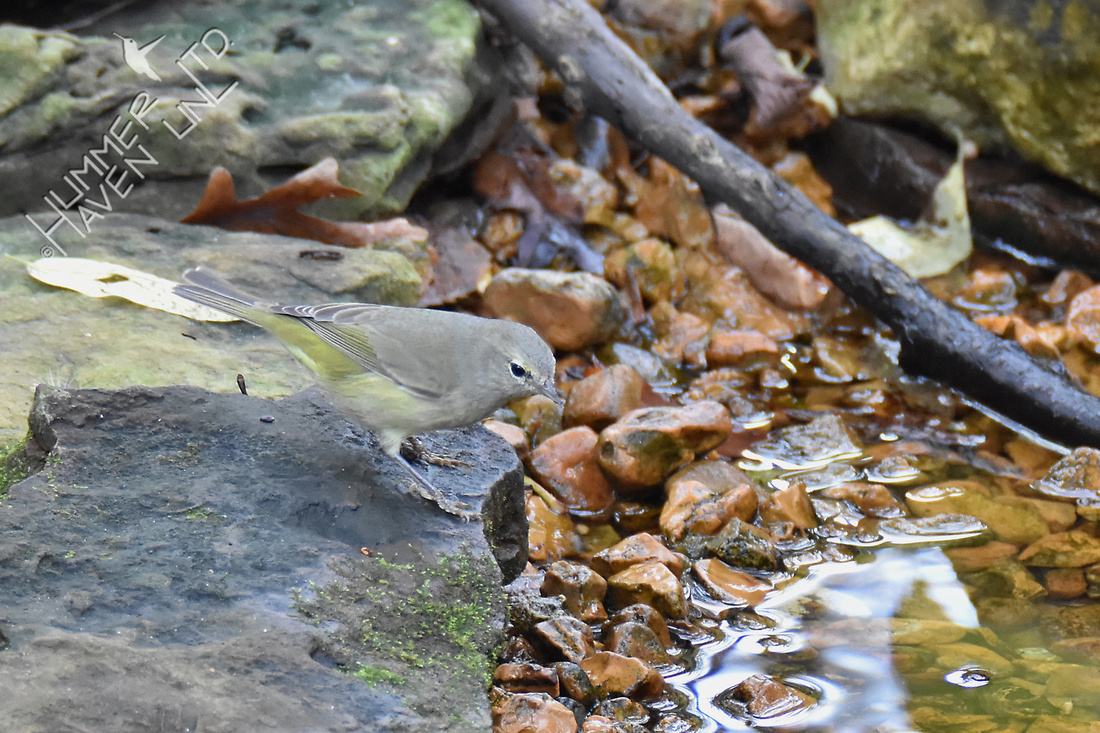 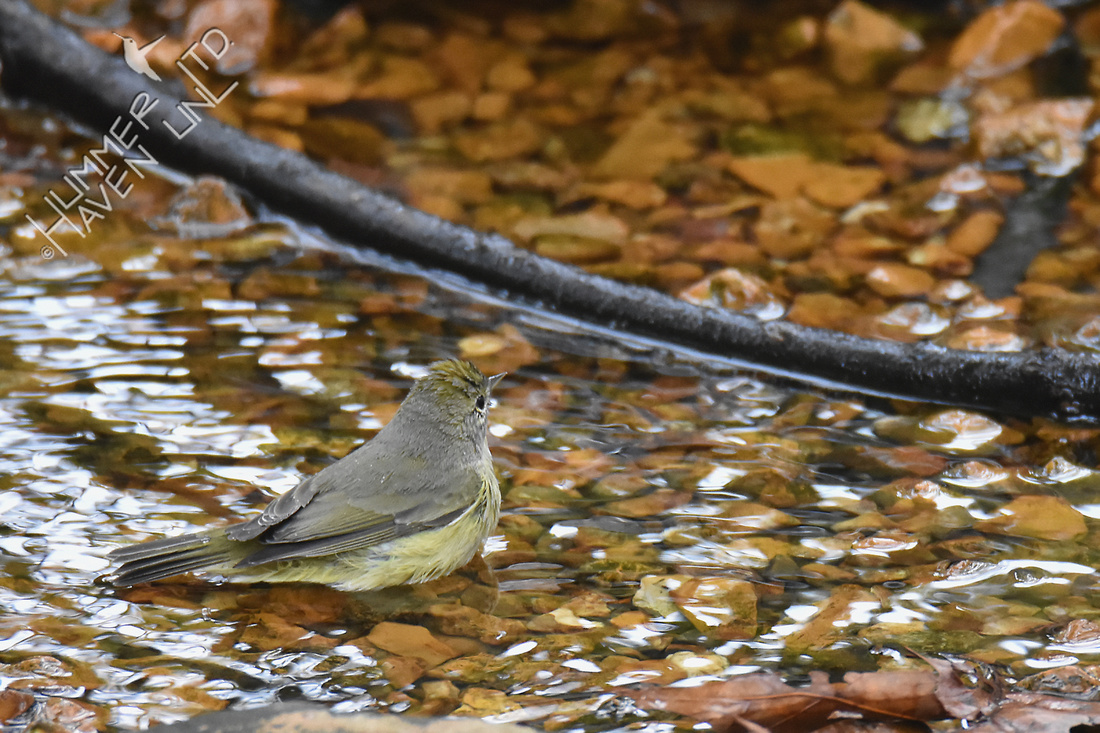 We finally got a good 2" of rain on Wednesday and early Thursday as a cool front moved through. In the late afternoon on Thursday, several species of birds really made a fuss. I suspected a Barred Owl was the reason for the ruckus but could not locate it in the tree canopy.

Friday, one of the healthier looking foxes strolled along the 'Bubbler trail' early in the morning.

It was kind of quiet for most of Friday with the usual suspects around. I looked out to check the bubbler about 5 p.m. and saw one of the owls nearby. The bird was hunched over some prey, which it would soon reveal and quickly devour. 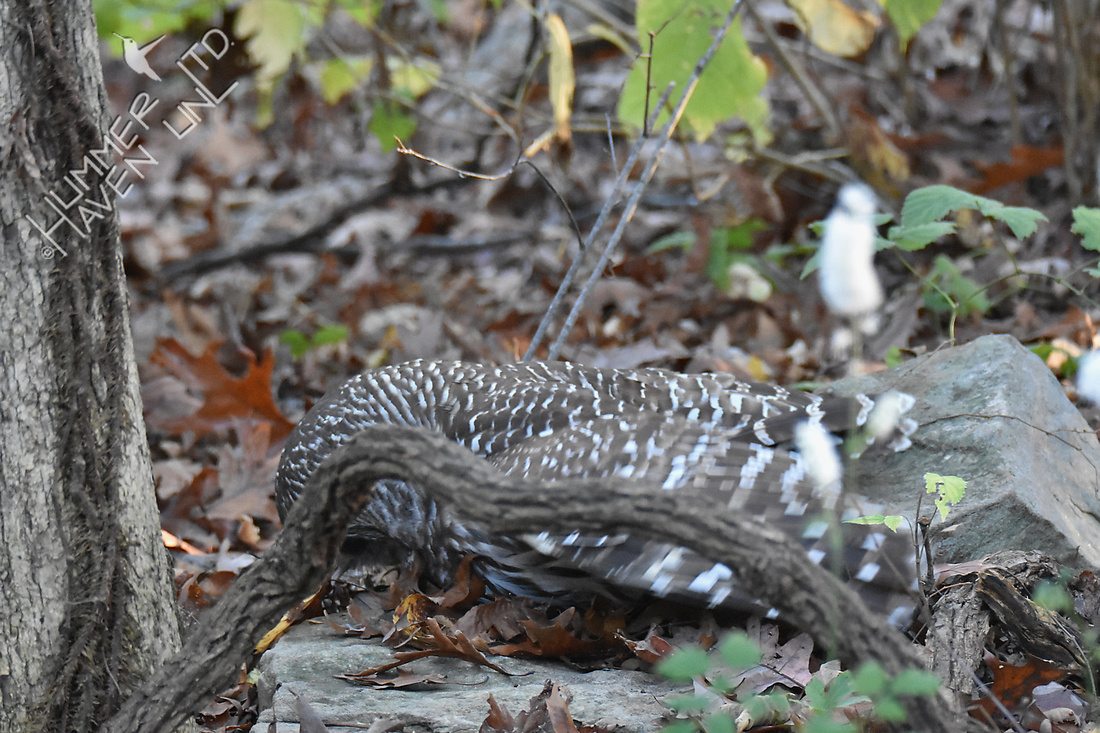 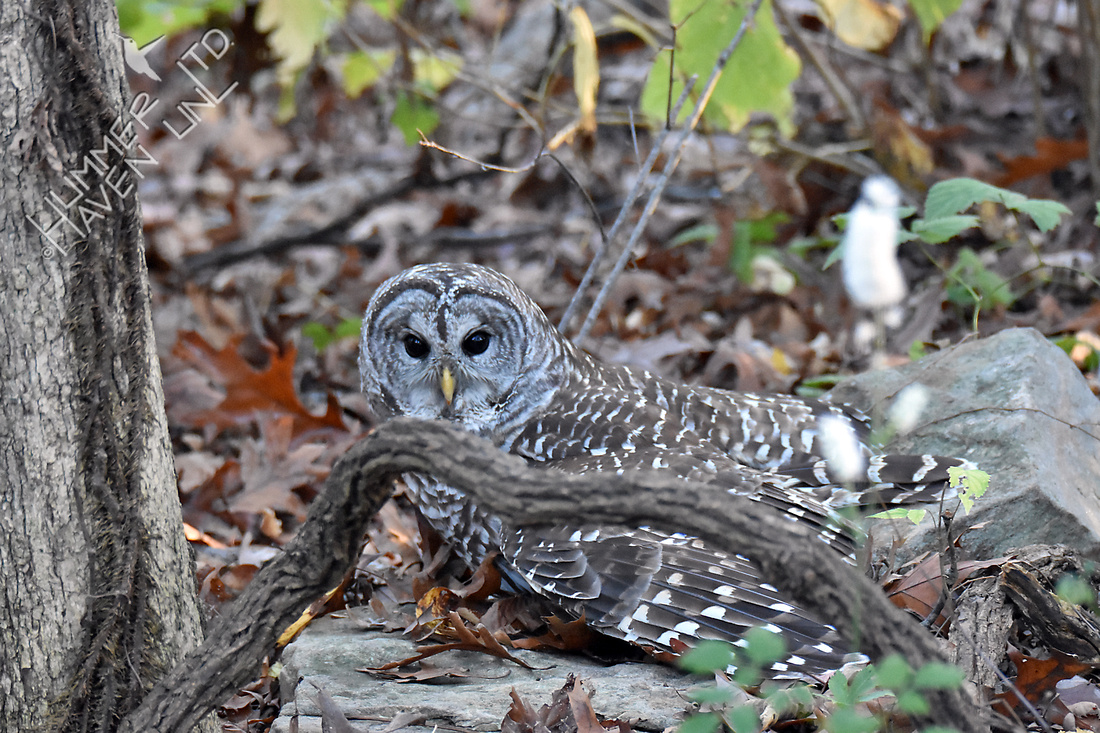 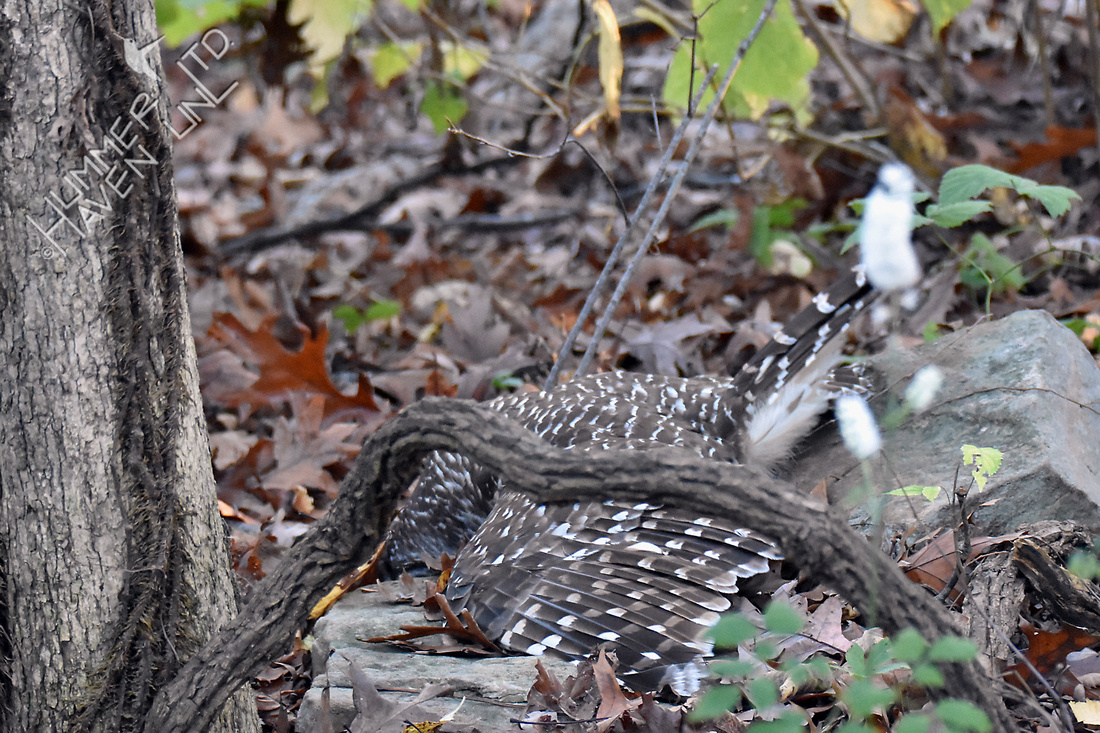 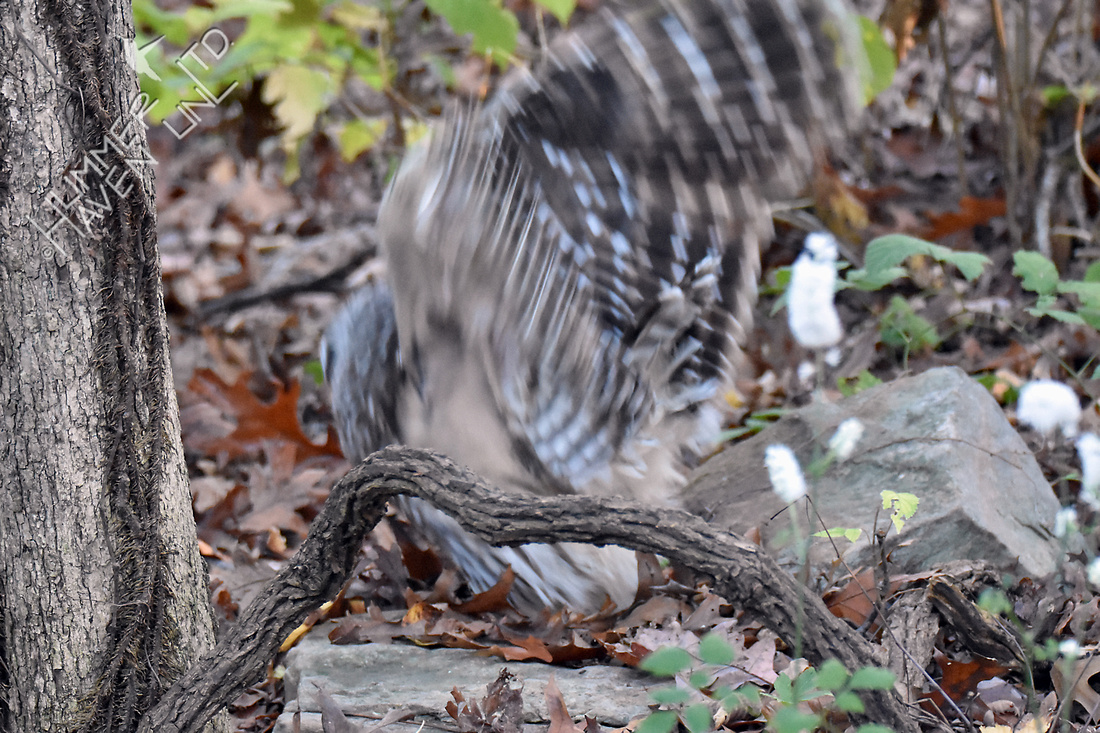 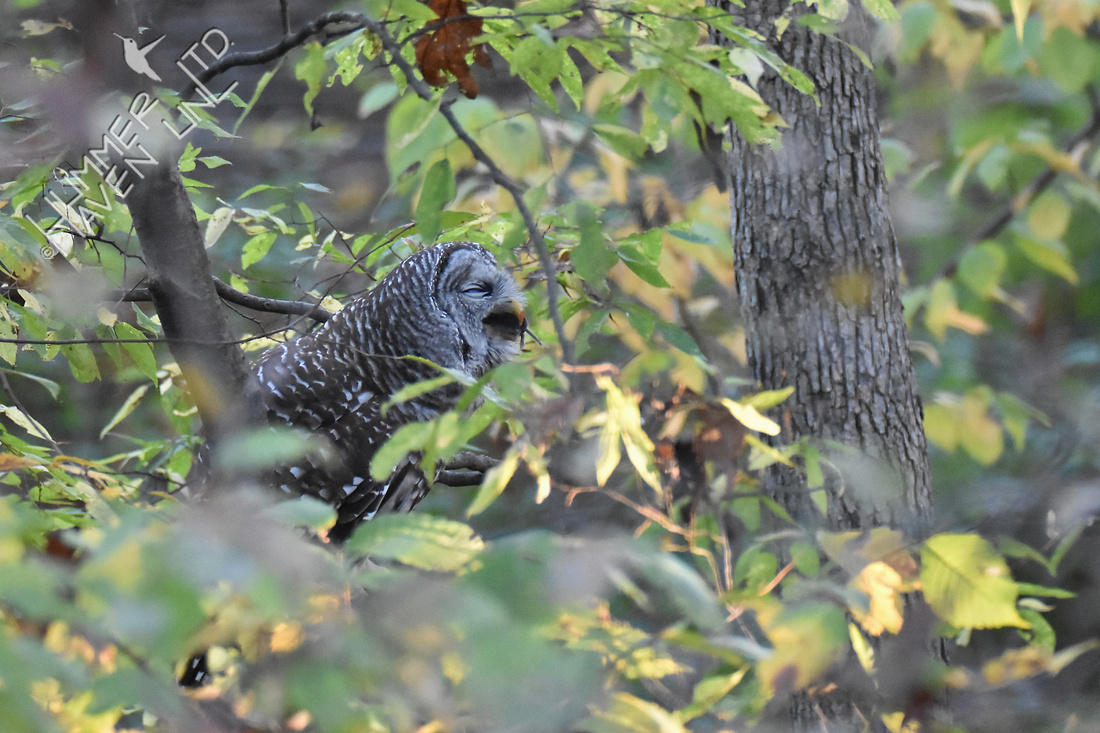 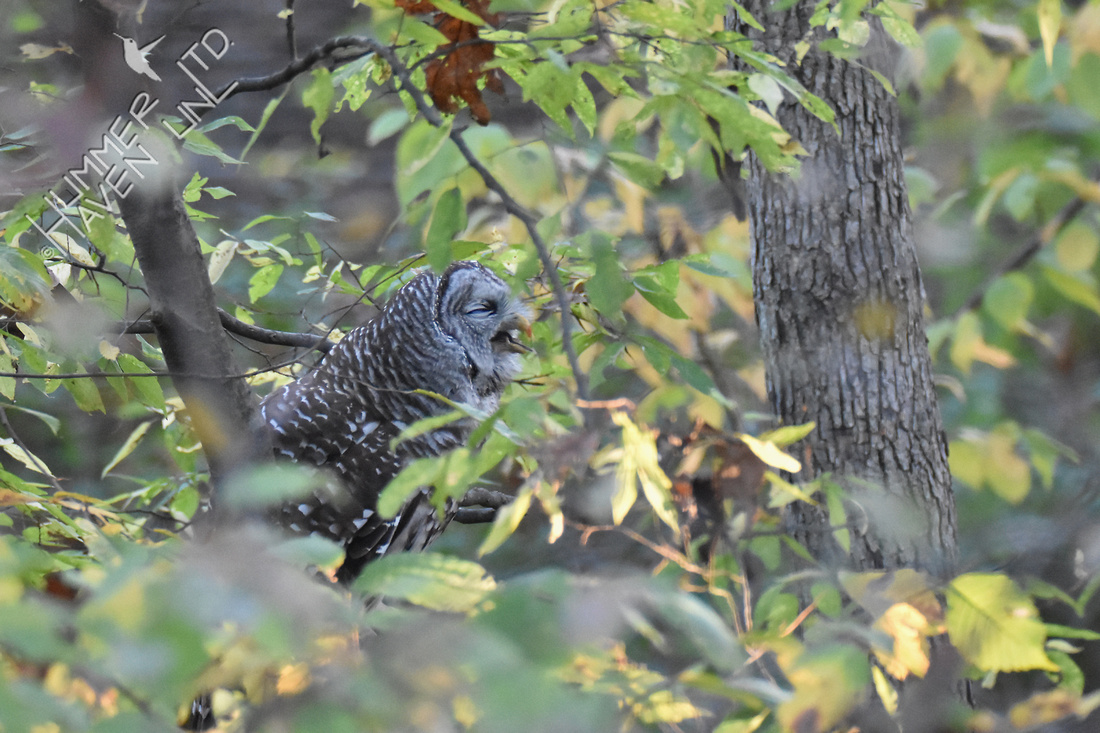 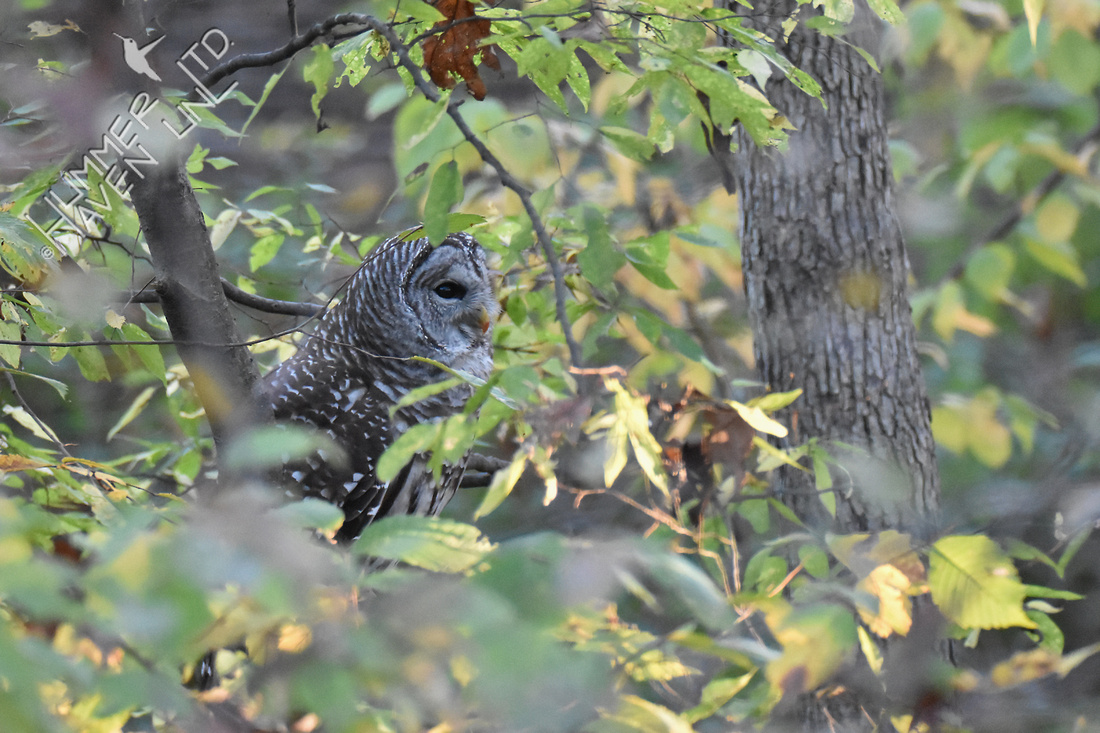 The appetizer was a field mouse, brought closer to the surface by the rains. The owl perched in the small hackberry (Celtis occidentalis) for over 45 minutes, digesting its food.

A flock of American Robins arrived on Saturday and their preferred food was American Beautyberry (Callicarpa americana). The lemony leaves accent the magenta berries in a bewitching way this time of year, signaling to the birds that the fatty fruits are ready for their taking. 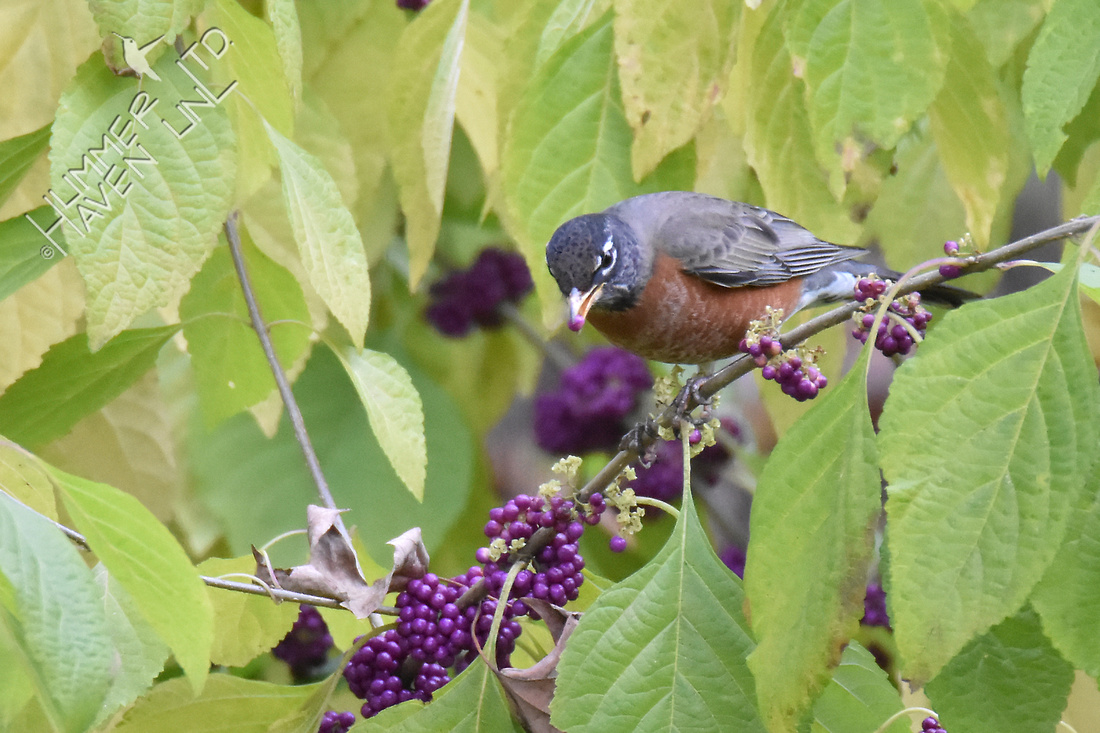 Yesterday, while Dan was cleaning the leaves off the driveway, I watched the little mangey fox come in for a long drink. One can see by the kinked white tip of a tail that it is not the same fox as the healthy one that came by a few days ago.

In the afternoon, I went out to the gazebo to photograph American Goldfinches that were in the garden. The fading sun shone on this one as it was eating the seeds of Eastern Blazingstar (Liatris scariosa). 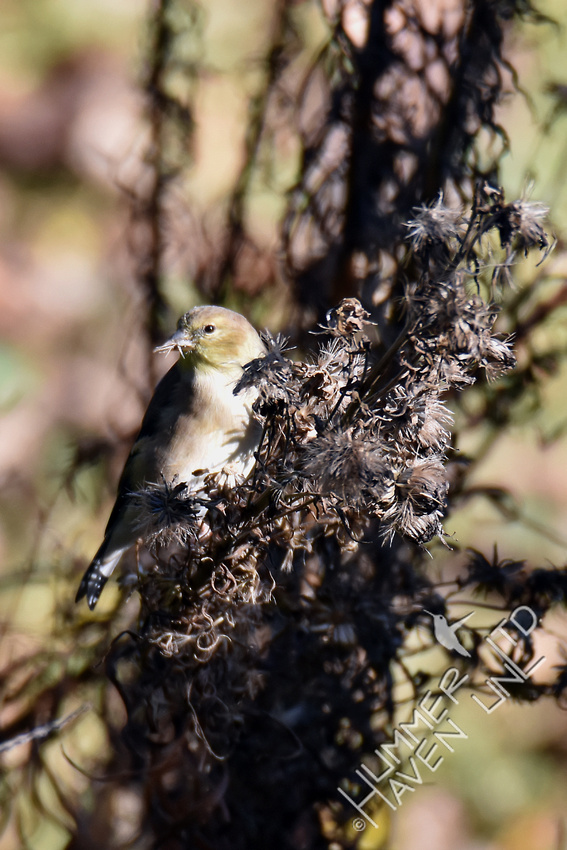 Just as I was about to finish, a Barred Owl flew right in front of me, navigating around the gazebo and between it and the Pond Cypress (Taxodium distichum var. imbricarium) that is barely 6 feet away. I could have touched its wing it was so close! It swooped up to a favorite perch on a leaning Green Ash (Fraxinus pennsylvanica) in the swampy thicket. 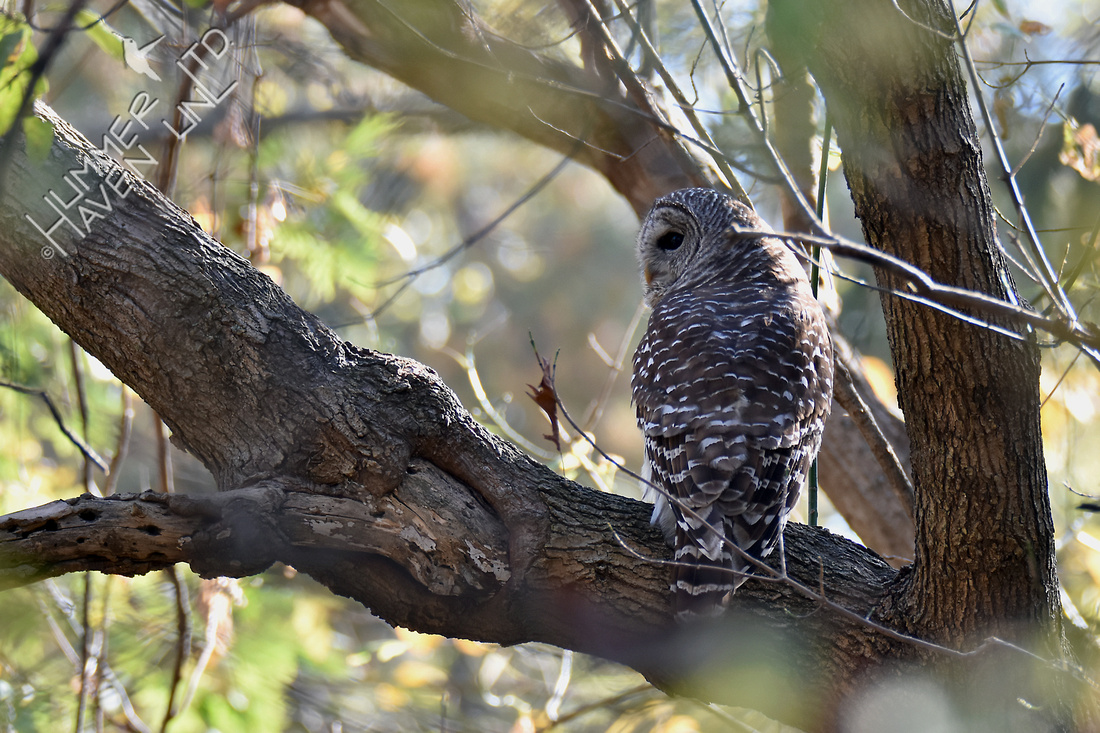 The owl had caught a vole and was caching it in the crook of the tree for a later meal. 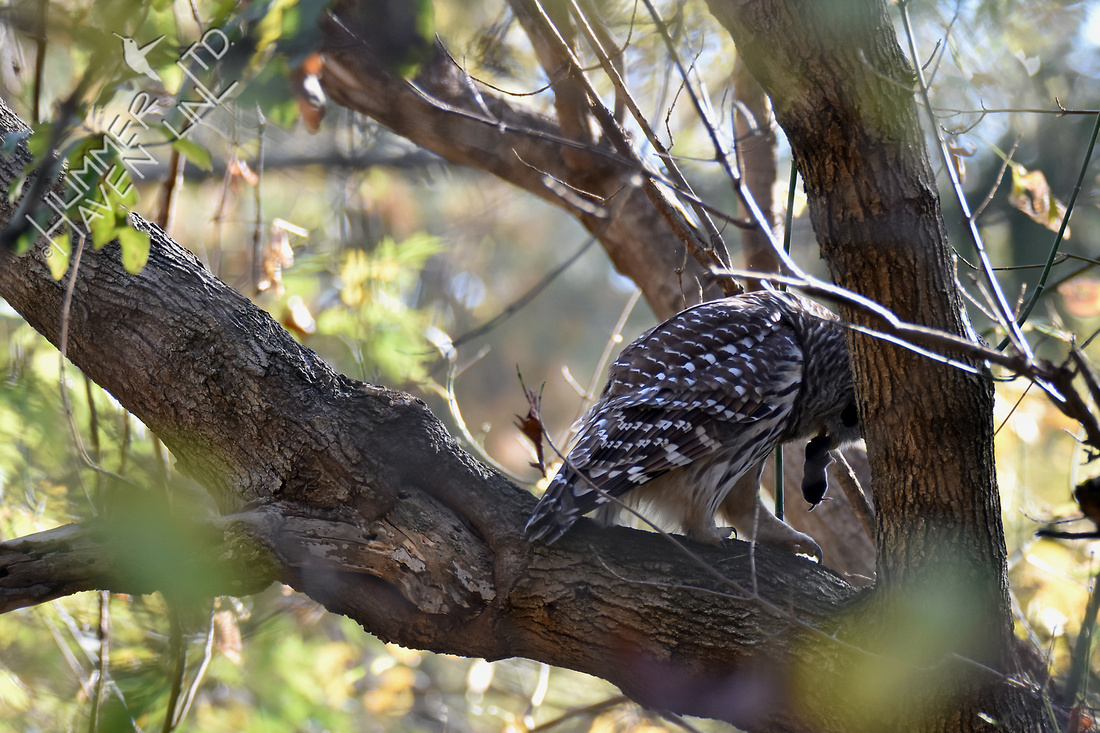 The owl's presence had caused much commotion with all the birds fussing about the situation, including one of the Carolina wrens brought into focus just in front of me. 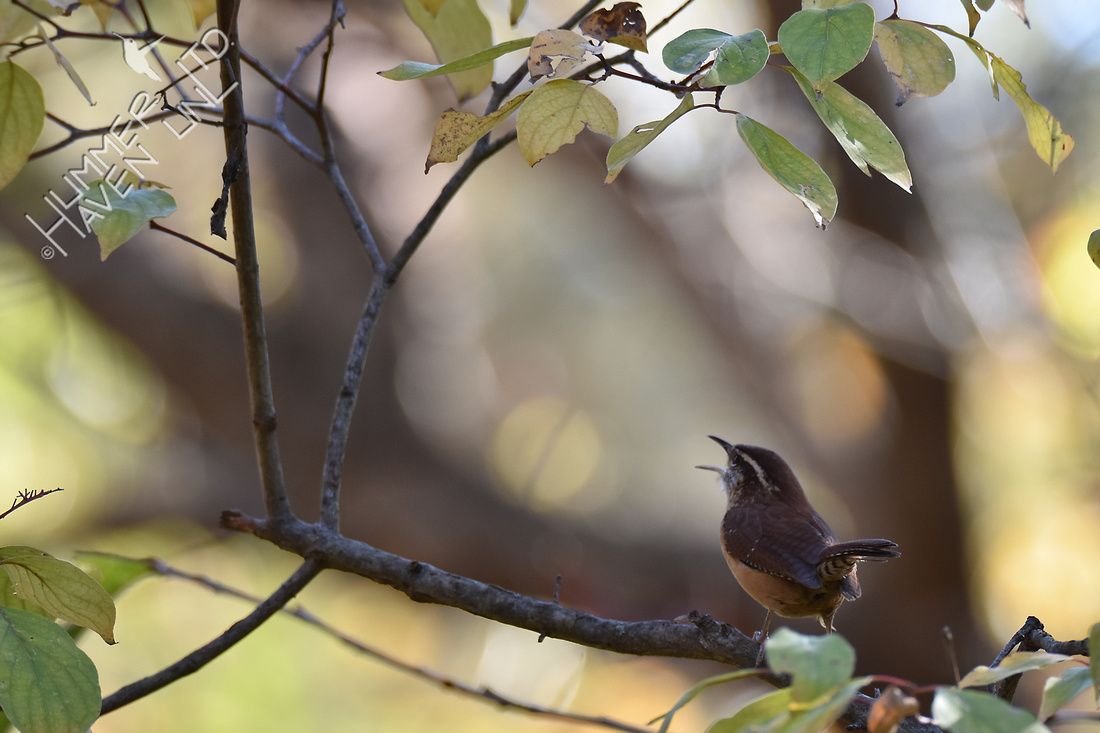 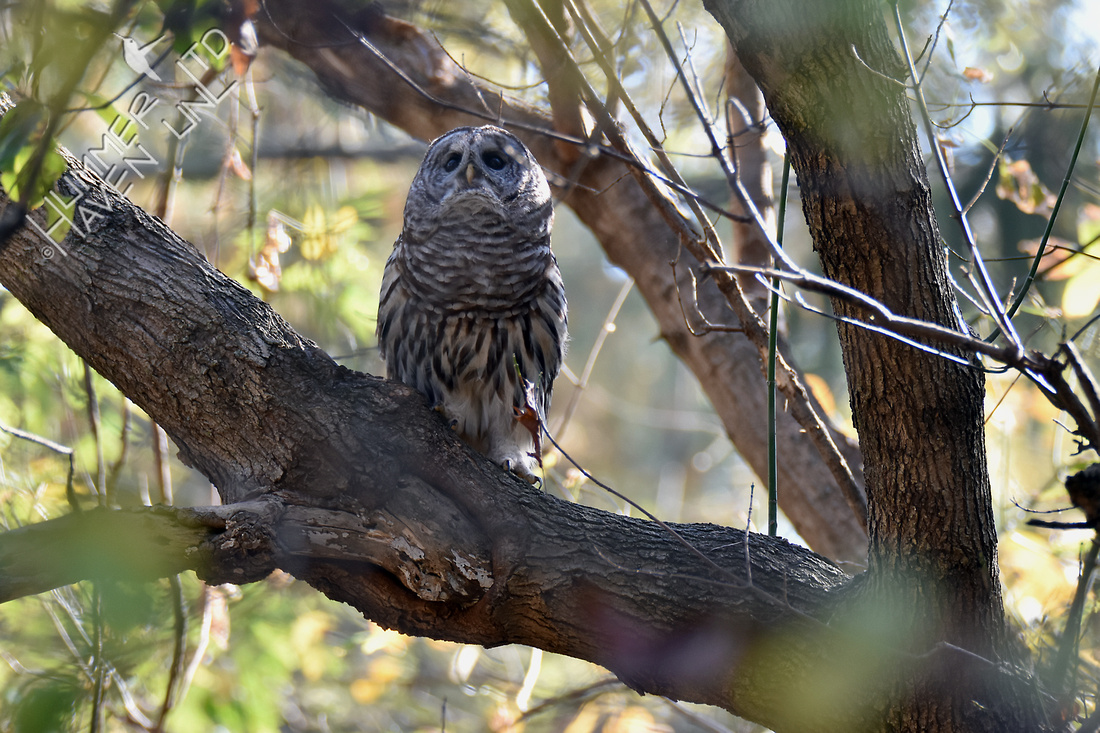 The owl had been harassed enough and flew off to denser cover.

Cooler weather does tend to increase hunger and activity. It has been a good start to the new month.