New arrivals and nesting birds are being seen. 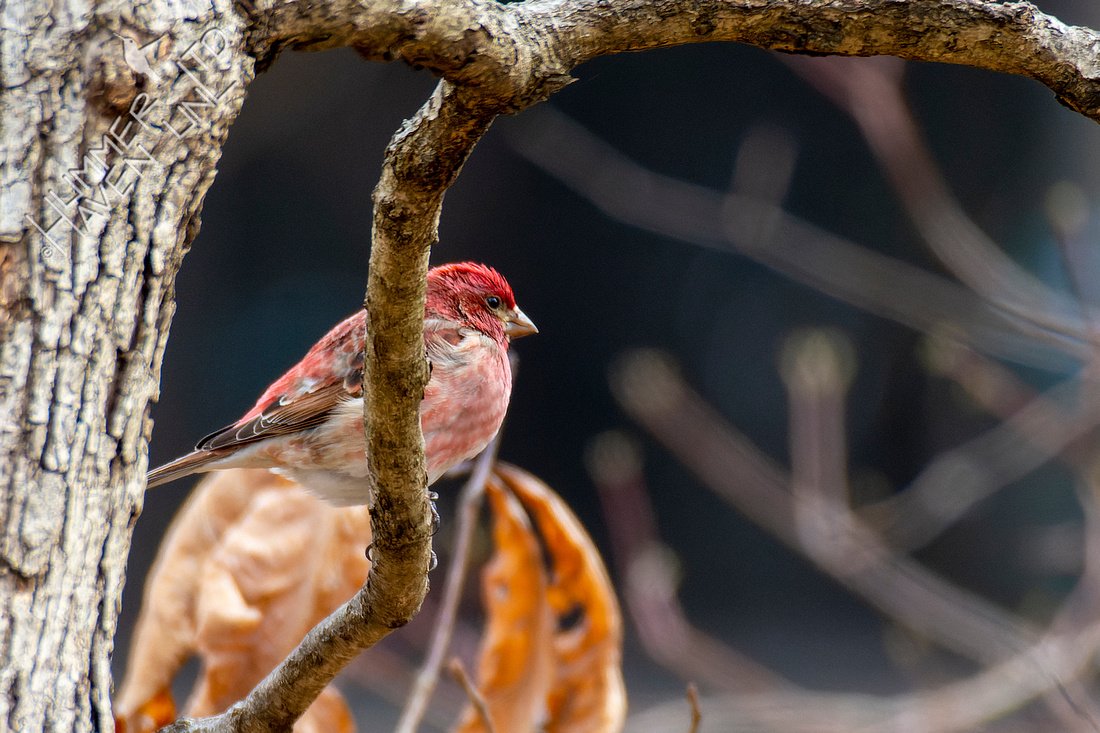 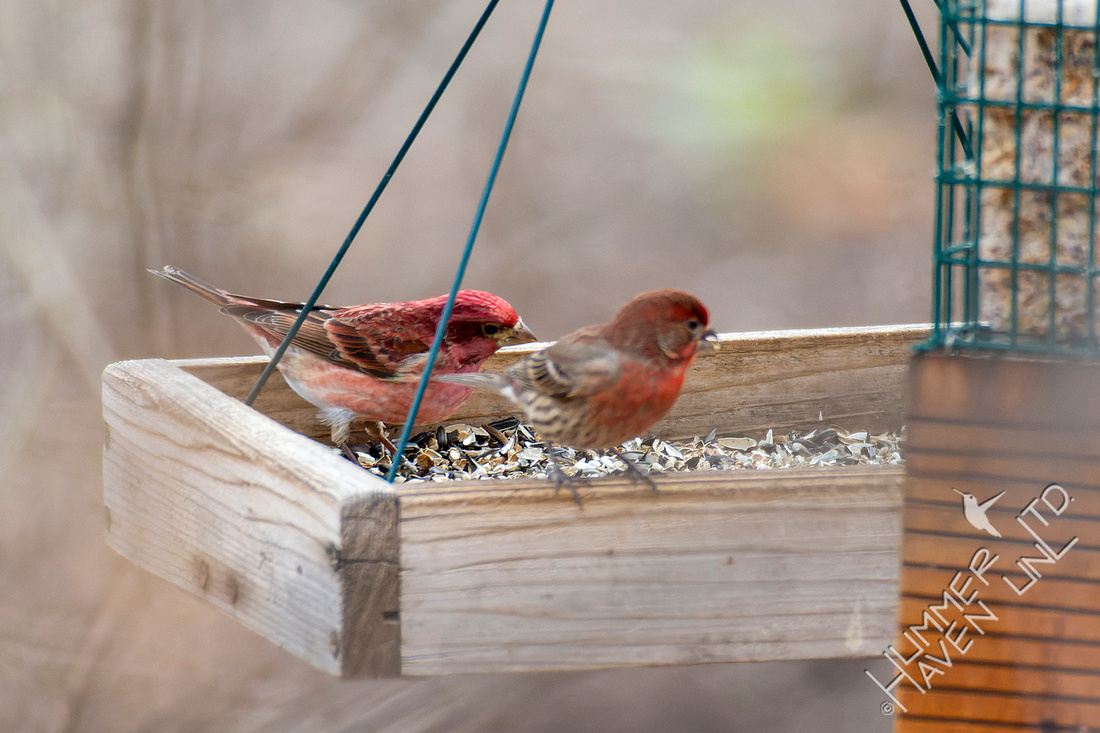 Our FOY #50 Purple Finch was seen on 3-28-22. This male was here just one day. In the tray feeder, it's easy to see the differences between the House Finch in front and the Purple Finch behind. The House Finch is orangier and smaller with striations on its flanks. 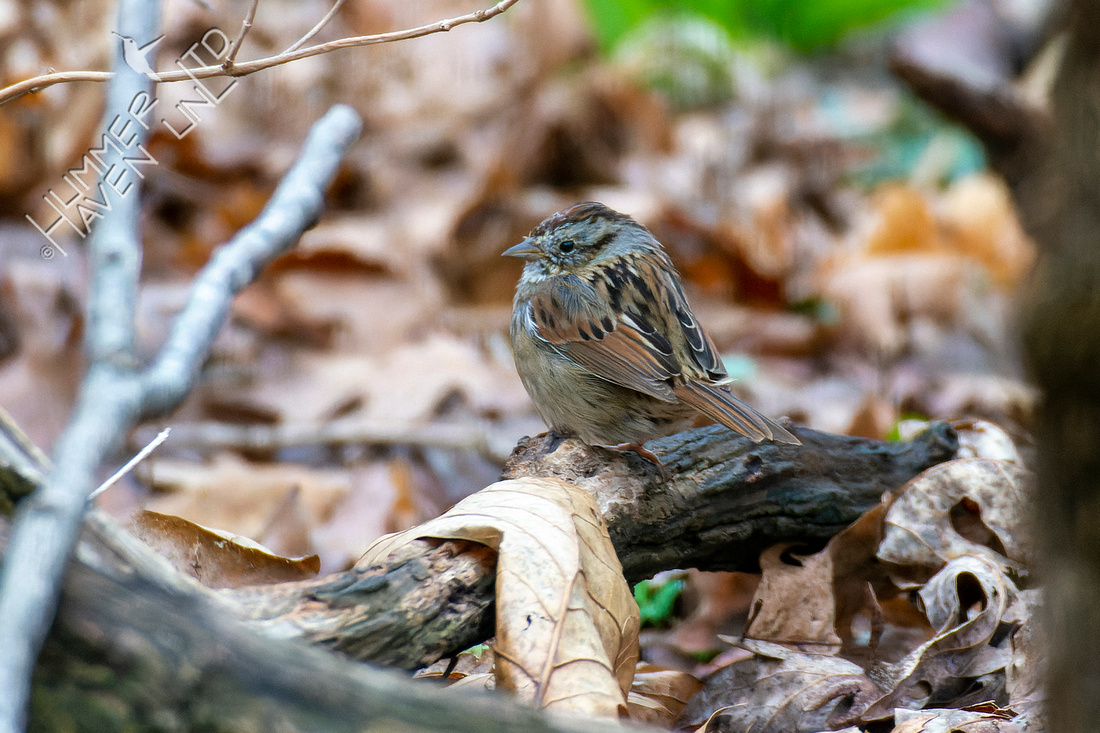 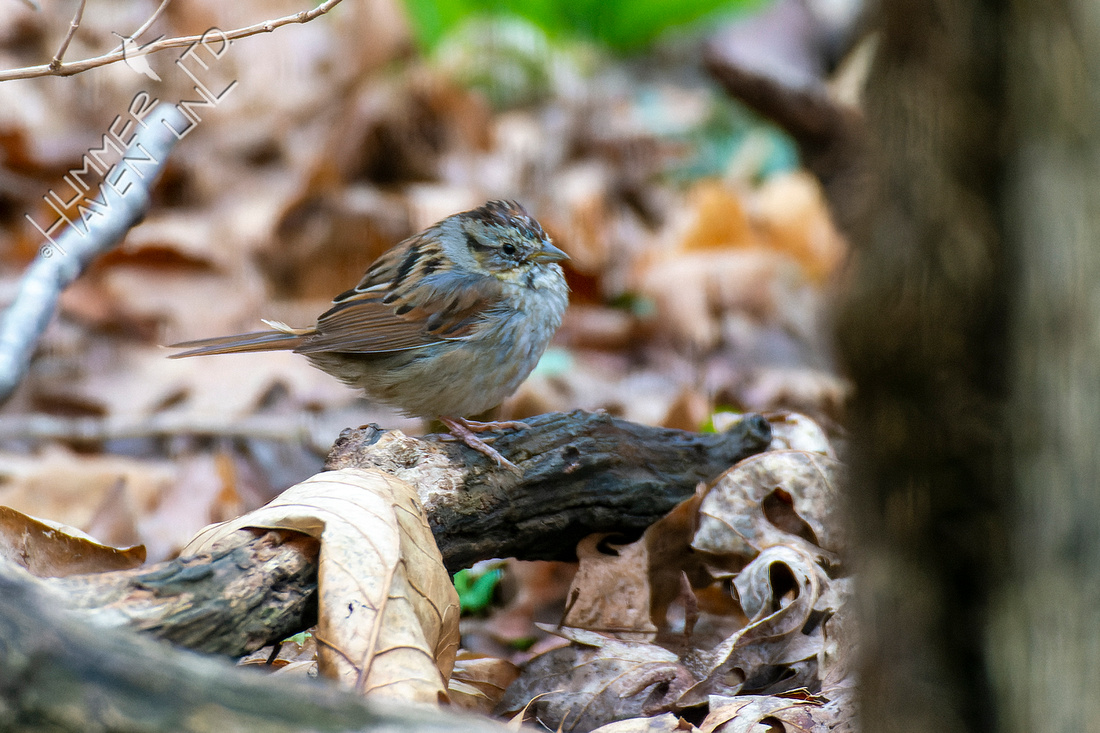 A bird that we missed last year showed up on 3-31-22, a Swamp Sparrow, FOY #52. Another bird had shown up earlier that day, a Brown Thrasher for #51. Though seen several times, it has eluded my efforts to photograph it. 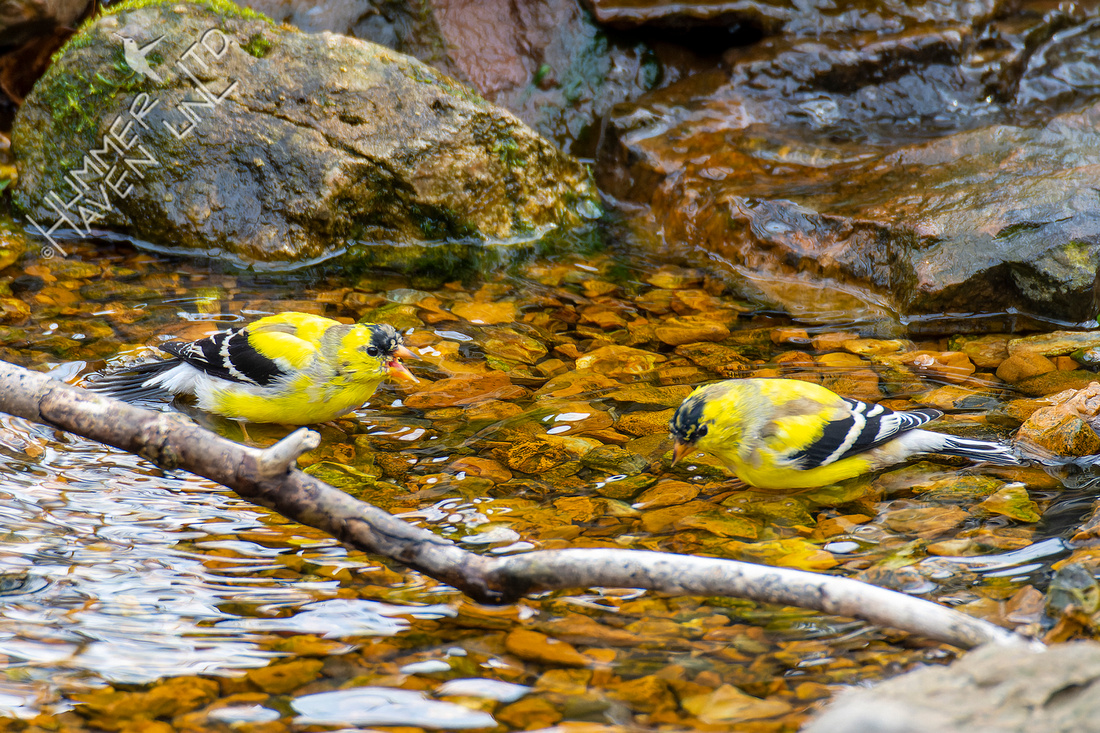 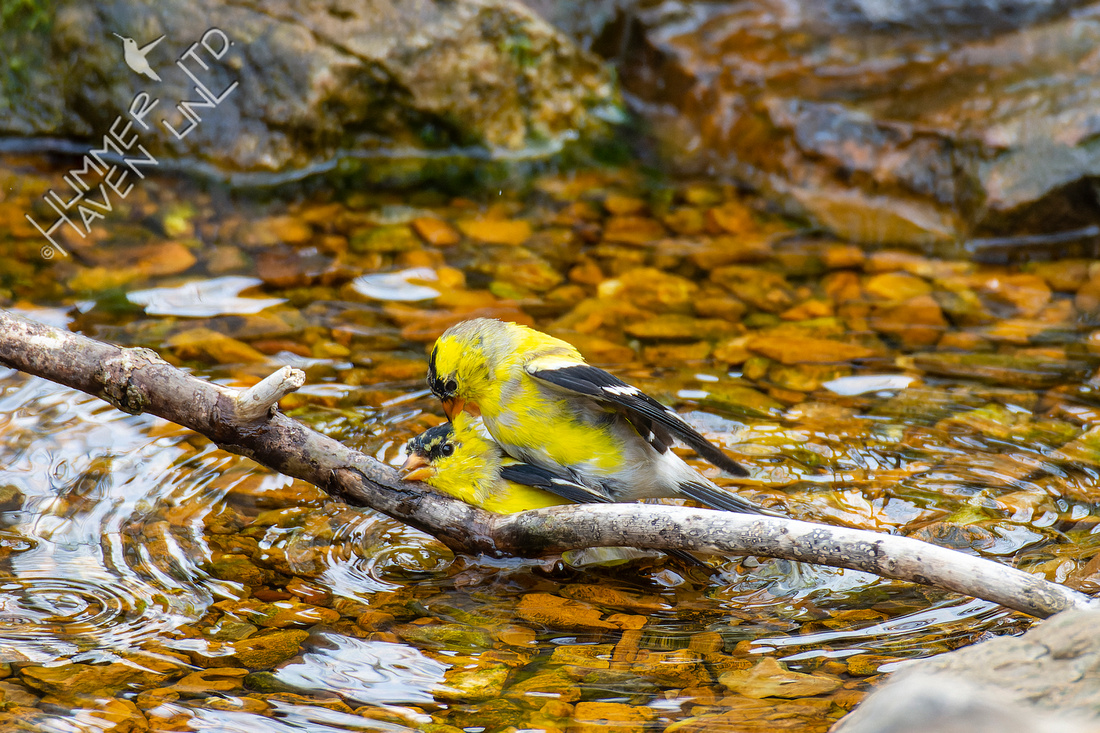 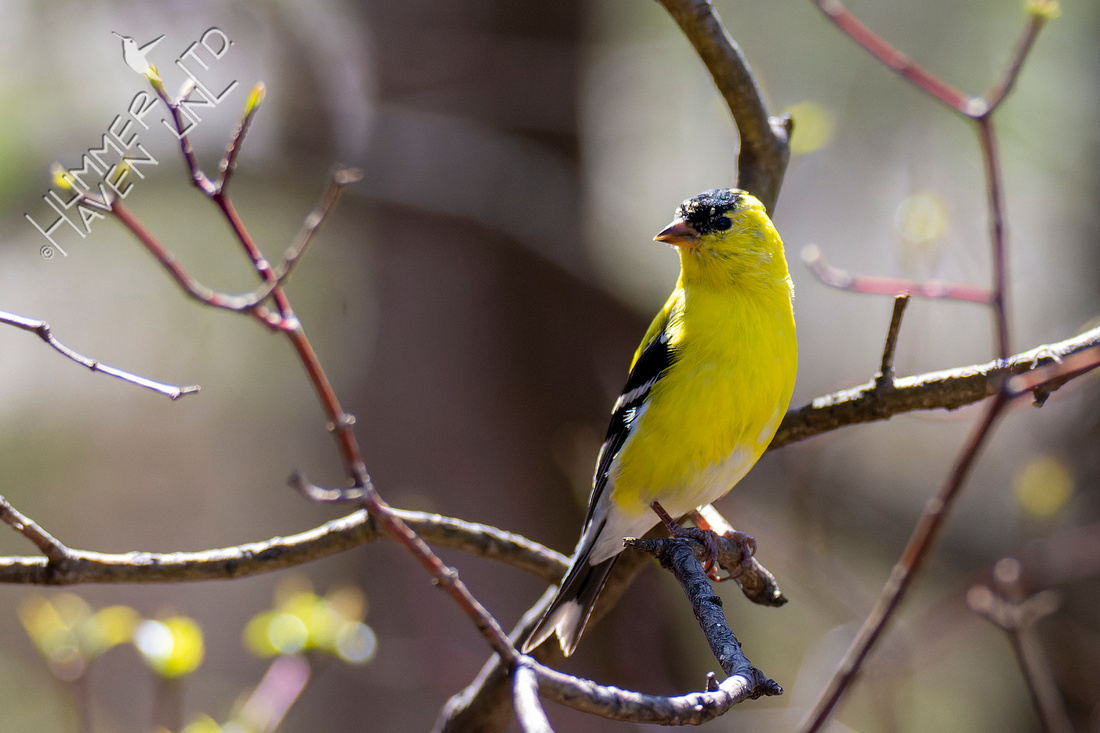 Many male birds are getting pretty testy with each other. Robins, sparrows and these American Goldfinches dramatically display the pecking order! Breeding is serious business and finding the best places to attract a mate and procreate is what Spring is all about for birds. 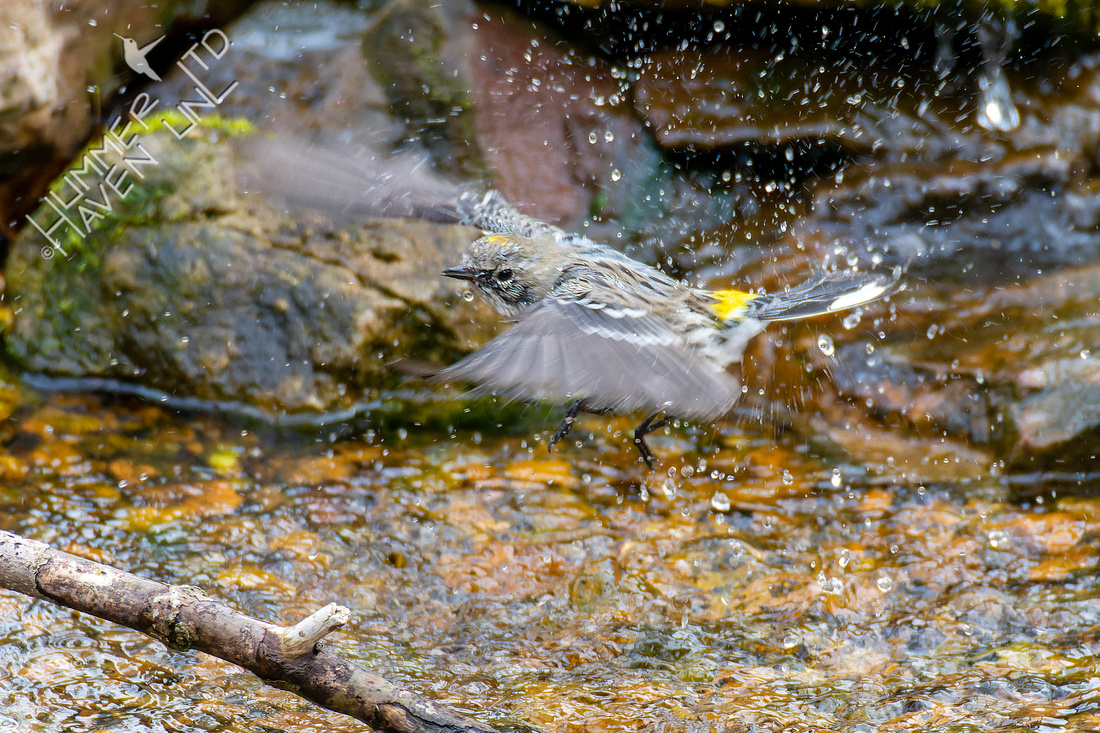 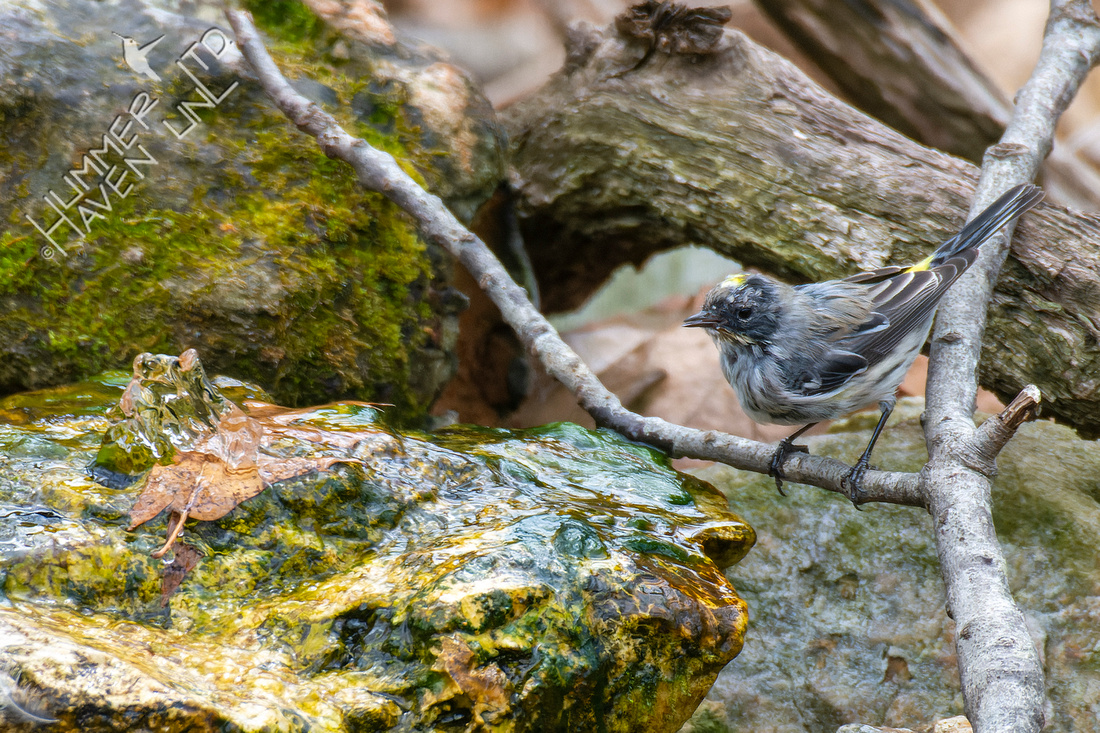 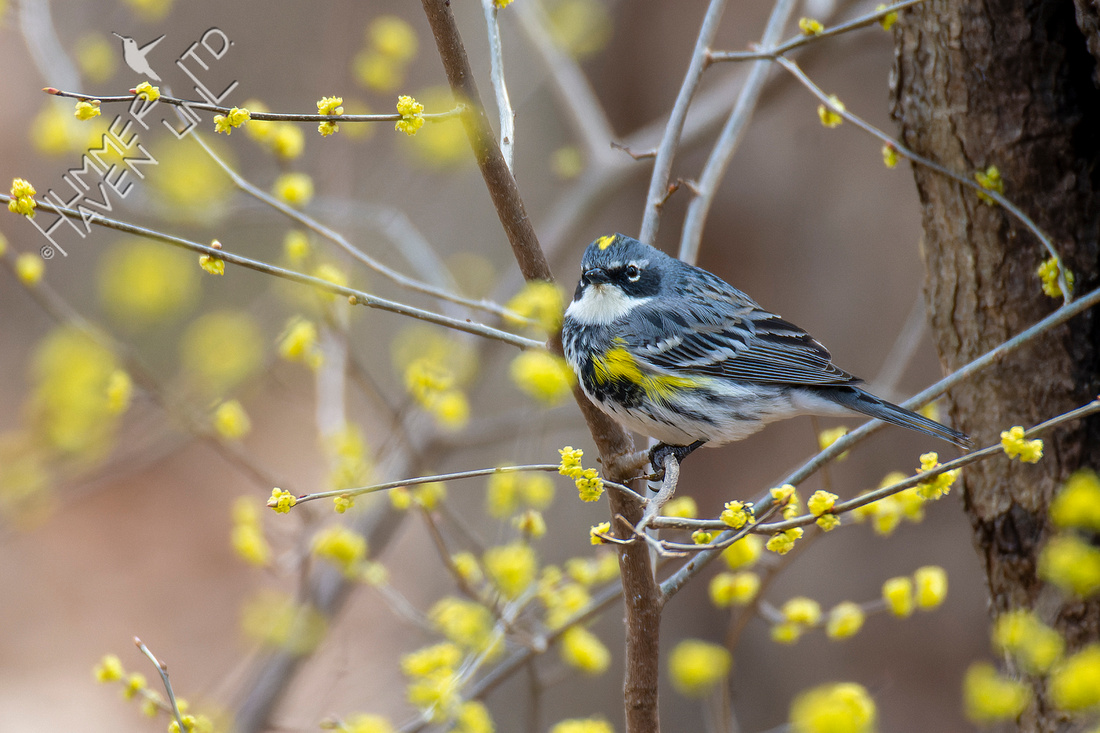 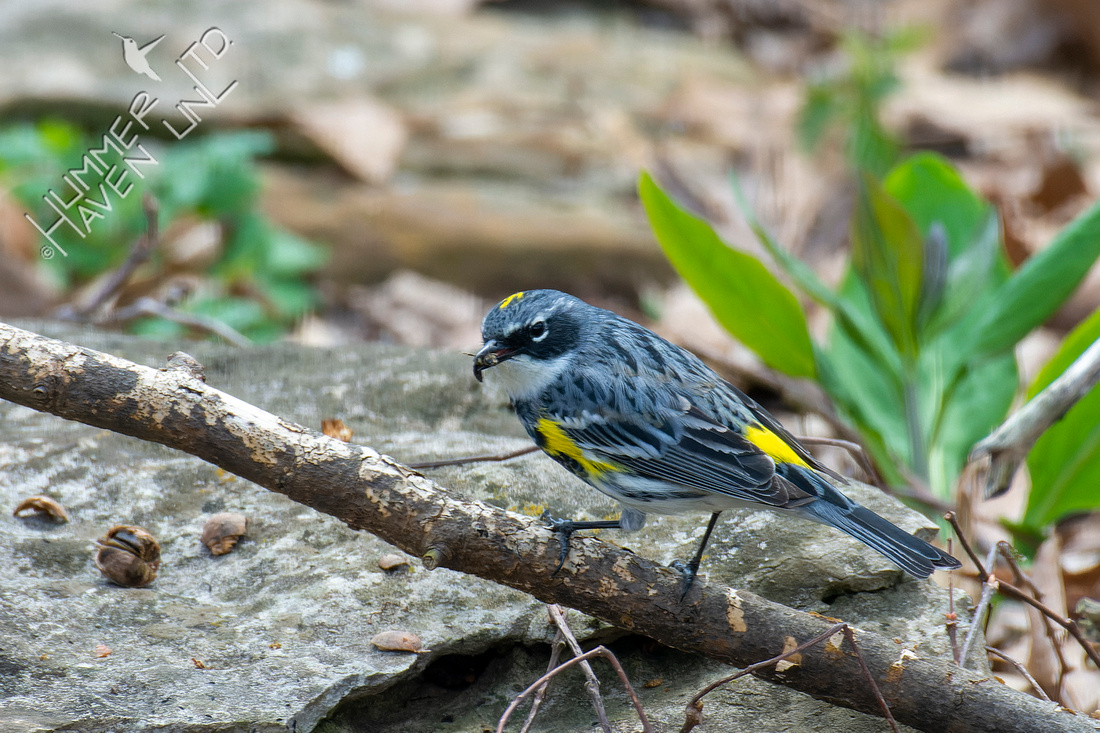 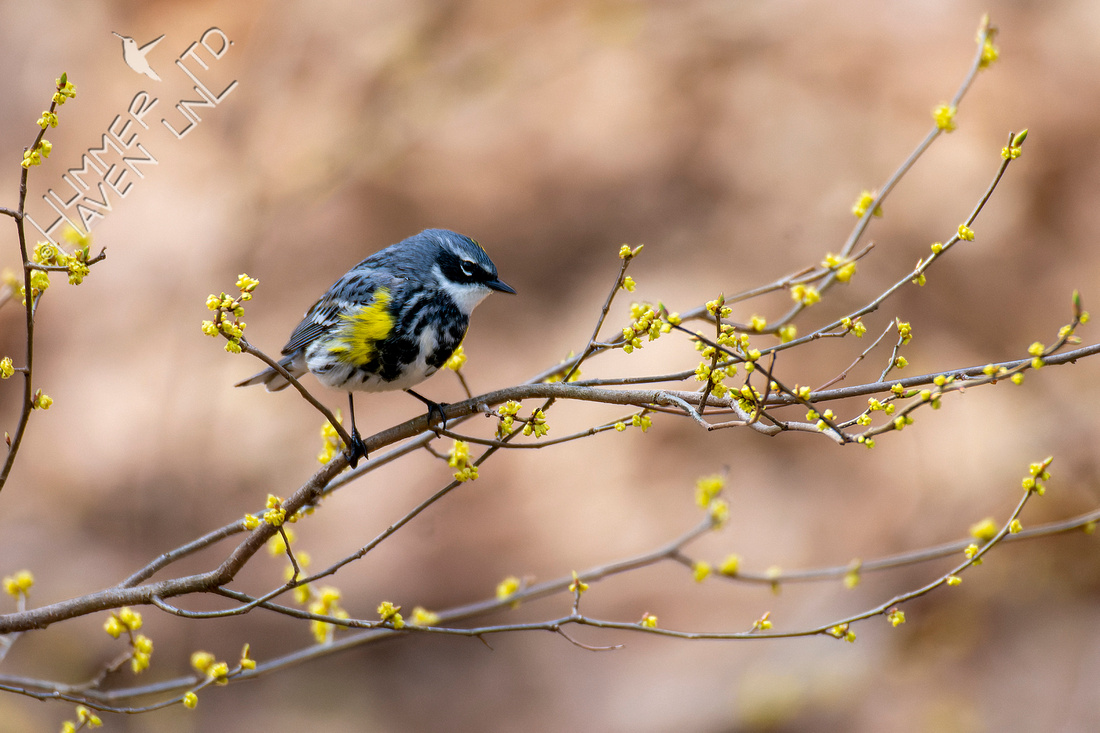 Yellow-rumped Warblers have been surviving on bark butter, peanut crumbs, suet and flying insects on warm days. The male in full breeding plumage caught a tiny mason bee while it was pollinating spicebush (Lindera benzoin). This is the first time I've documented that behavior. 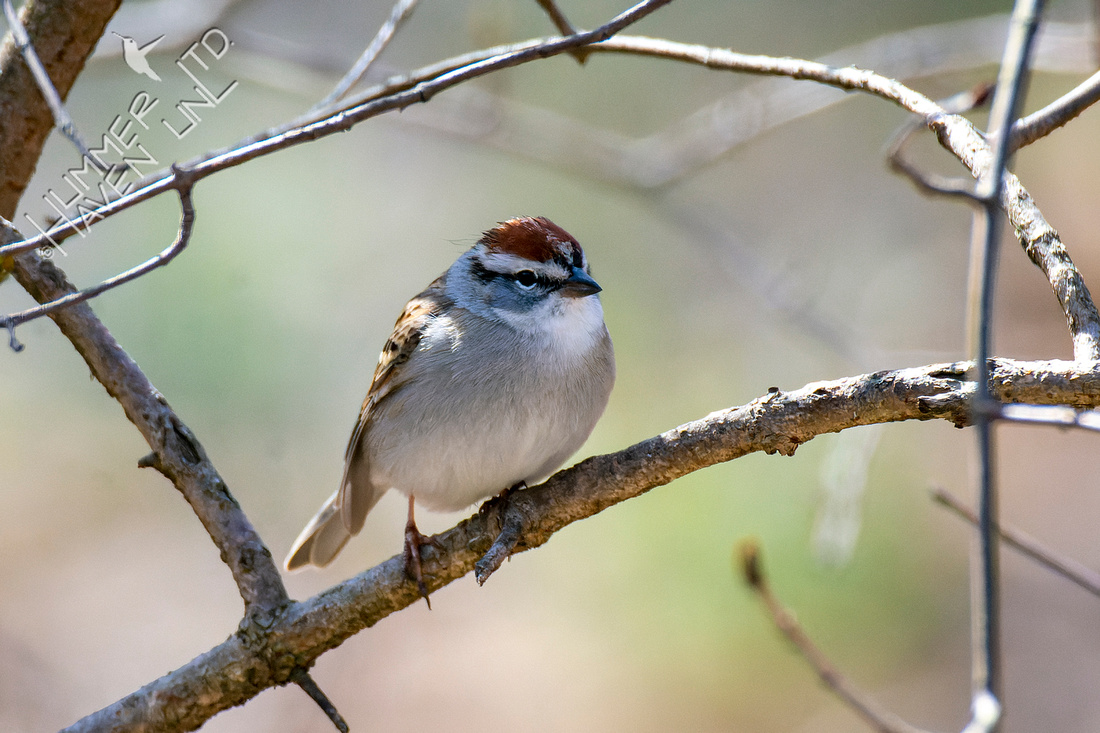 Another new arrival was a little Chipping Sparrow FOY#53 on 4-1-22.  It was here for two days before moving on. 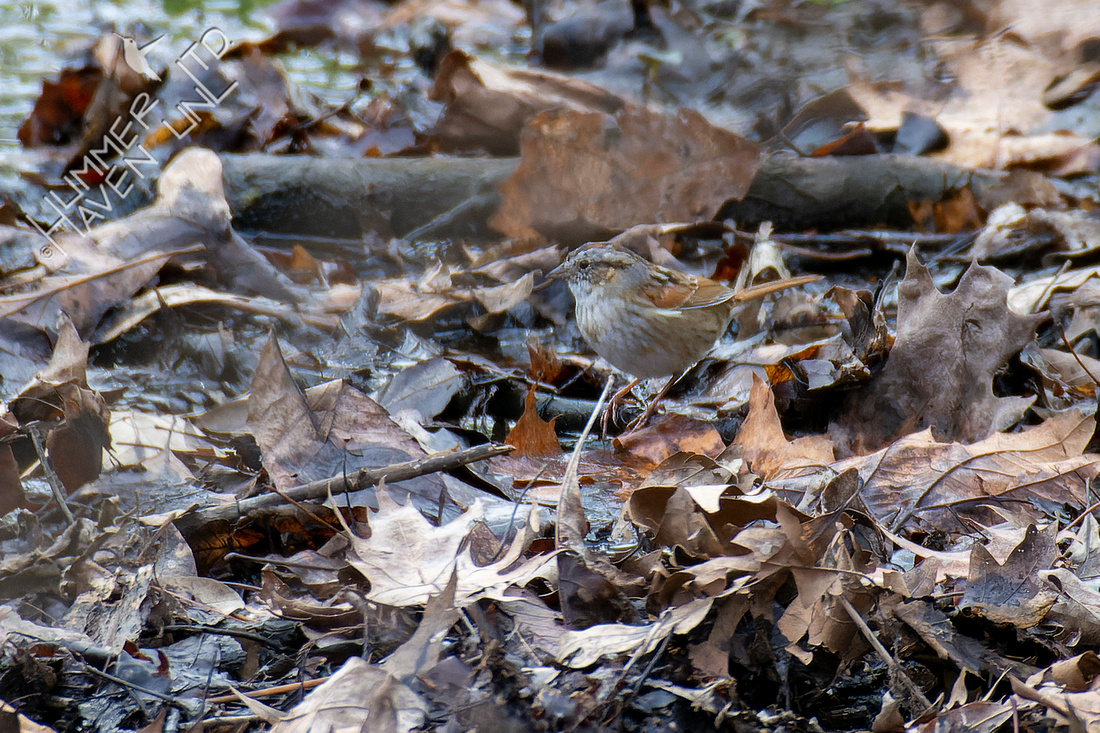 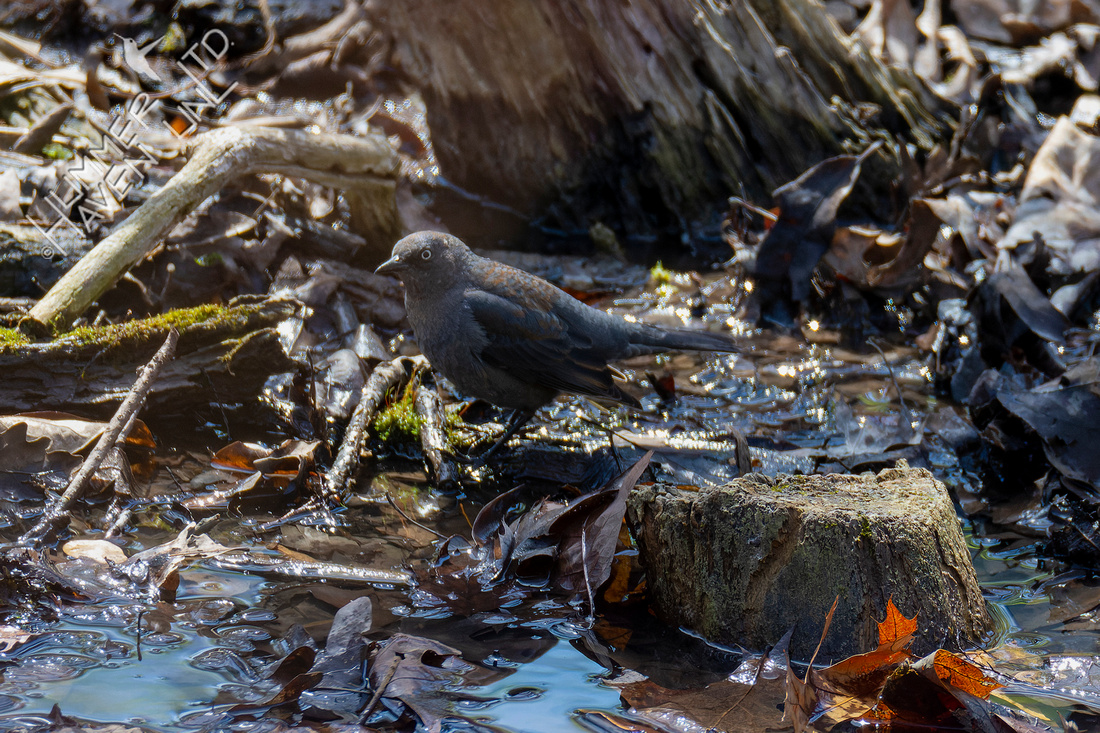 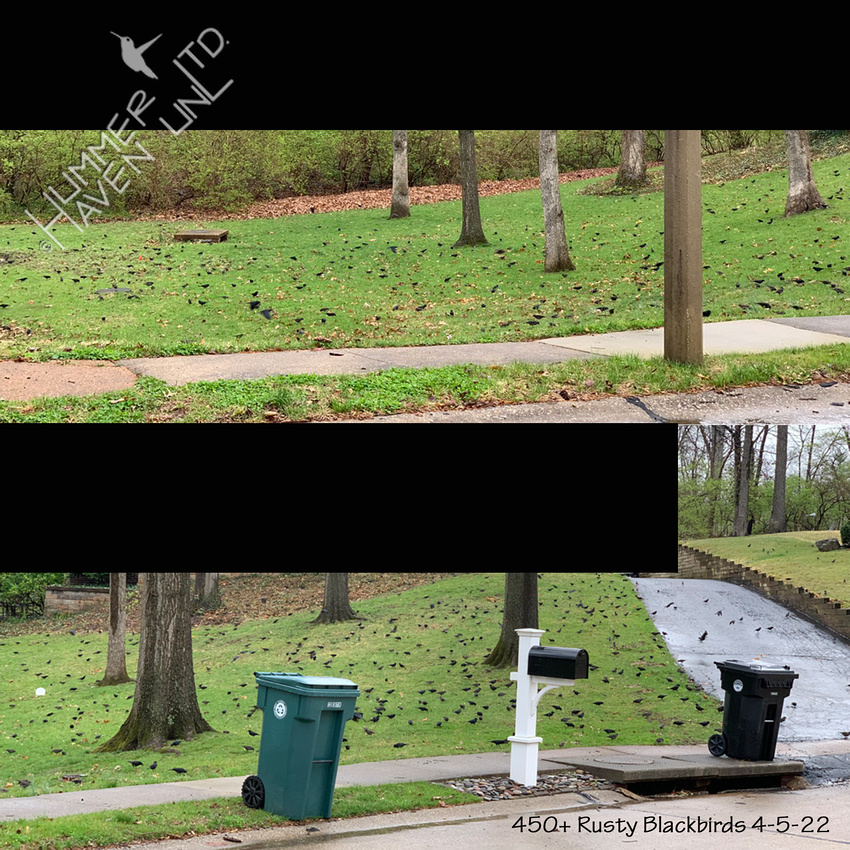 We have seen large flocks of Rusty Blackbirds come in to forage in the leaves throughout the yard and especially in the swampy woods. It can be really challenging to begin to show how many there are, they're so camouflaged. On Tuesday, there was a very large flock here and when I left to go vote, they flushed and started to move east and then north out of our yard and into our neighbors' yards. I drove very slowly to photograph the birds with my phone. I enlarged the photos and counted the birds, there were over 450! Add in another 150 or so that had moved up into the canopy, and well, at least 600 birds were here in the neighborhood. This species is listed as Vulnerable. We are lucky to see them and try not to disturb them so they can feed on insects in the leaves. I suspect they moved back into our yard after I left. 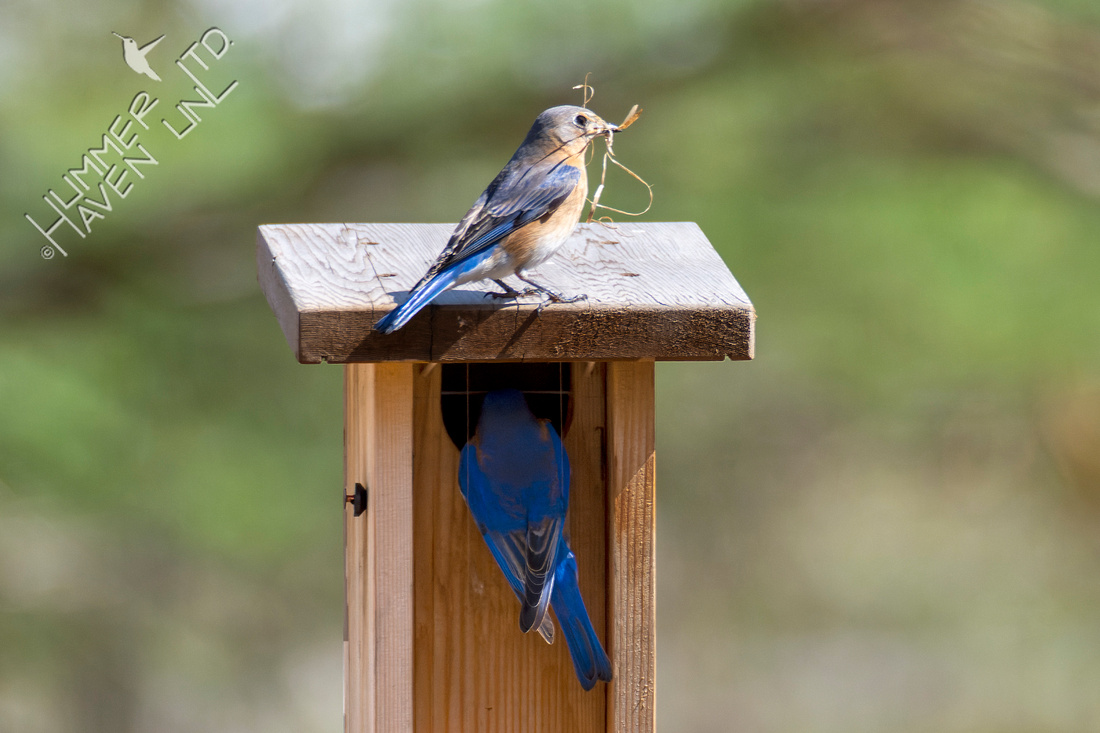 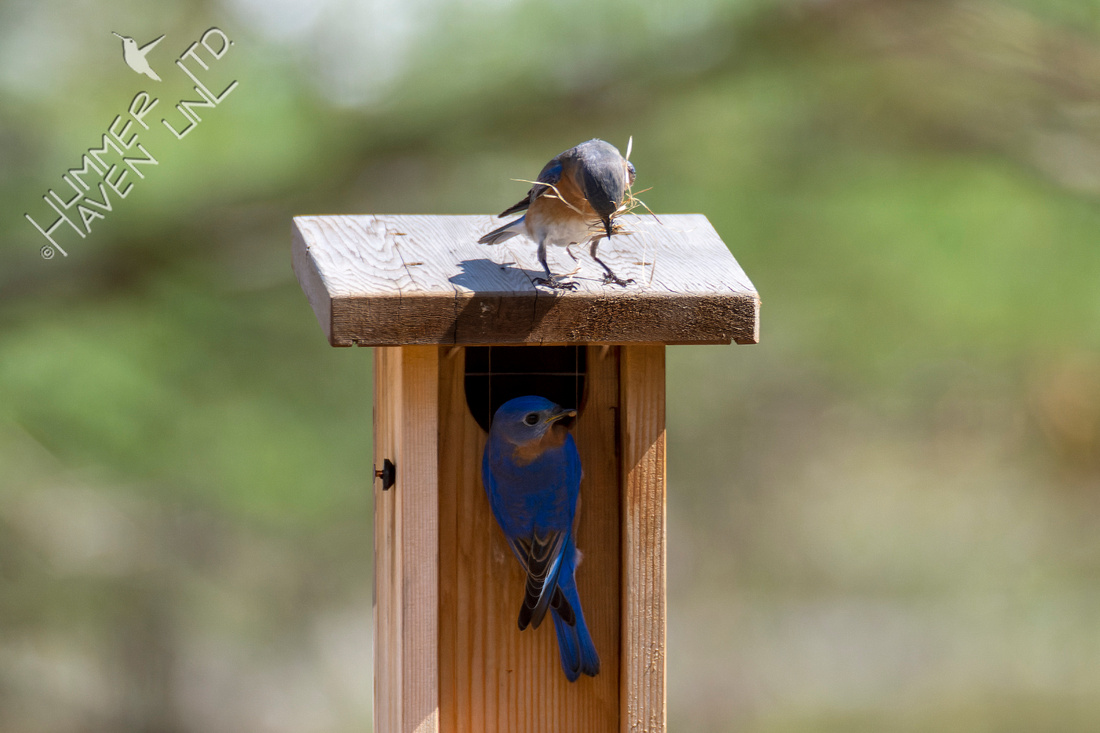 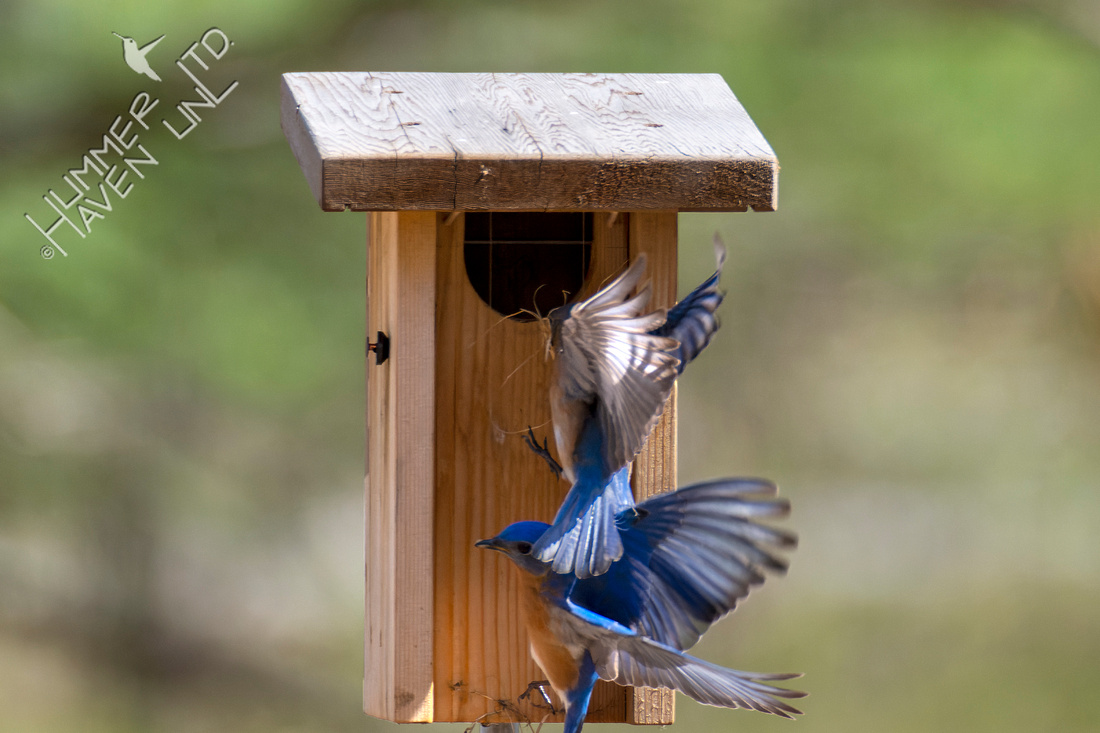 The pair of Eastern Bluebirds has been very busy building their nest. They both seem to be micromanaging this joint operation! They were still working on finishing touches this morning. 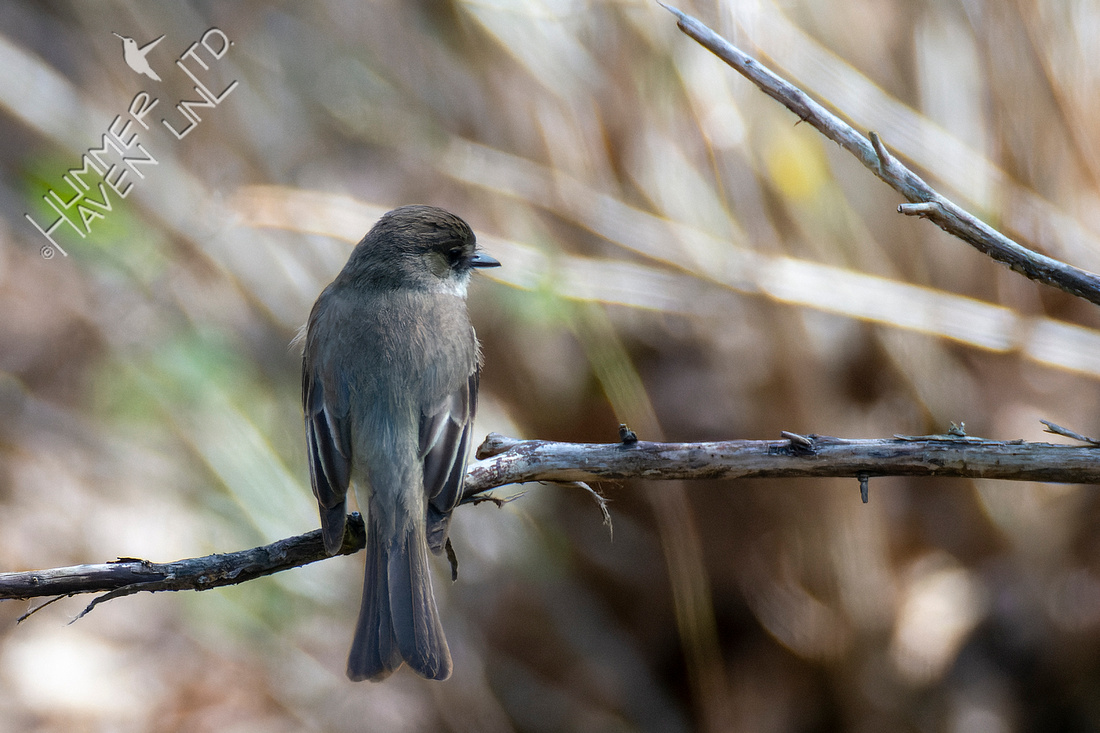 The pair of Eastern Phoebes have been at work as well. We've seen the female gathering nesting material while the male calls away. 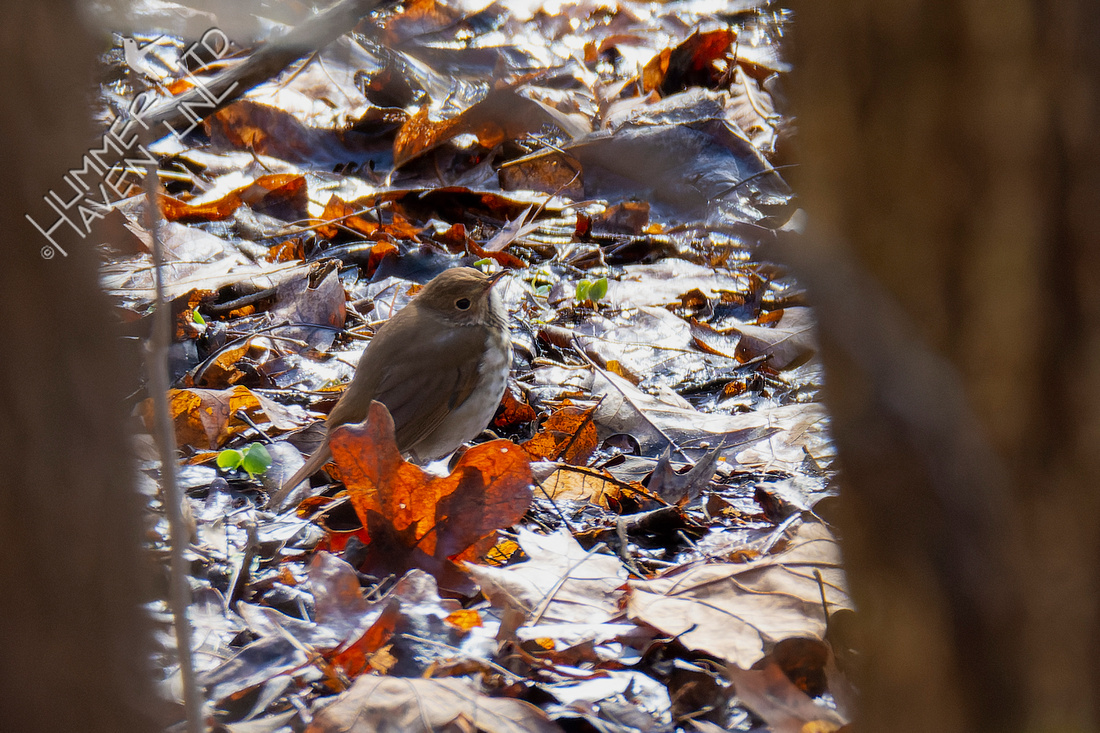 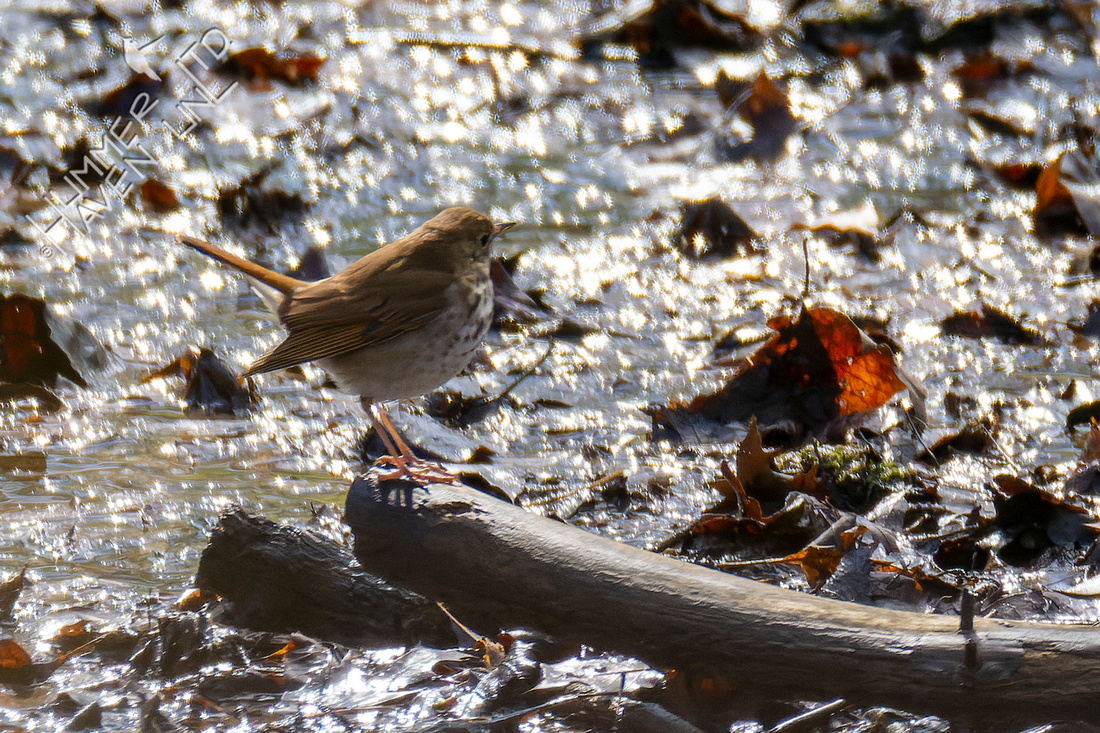 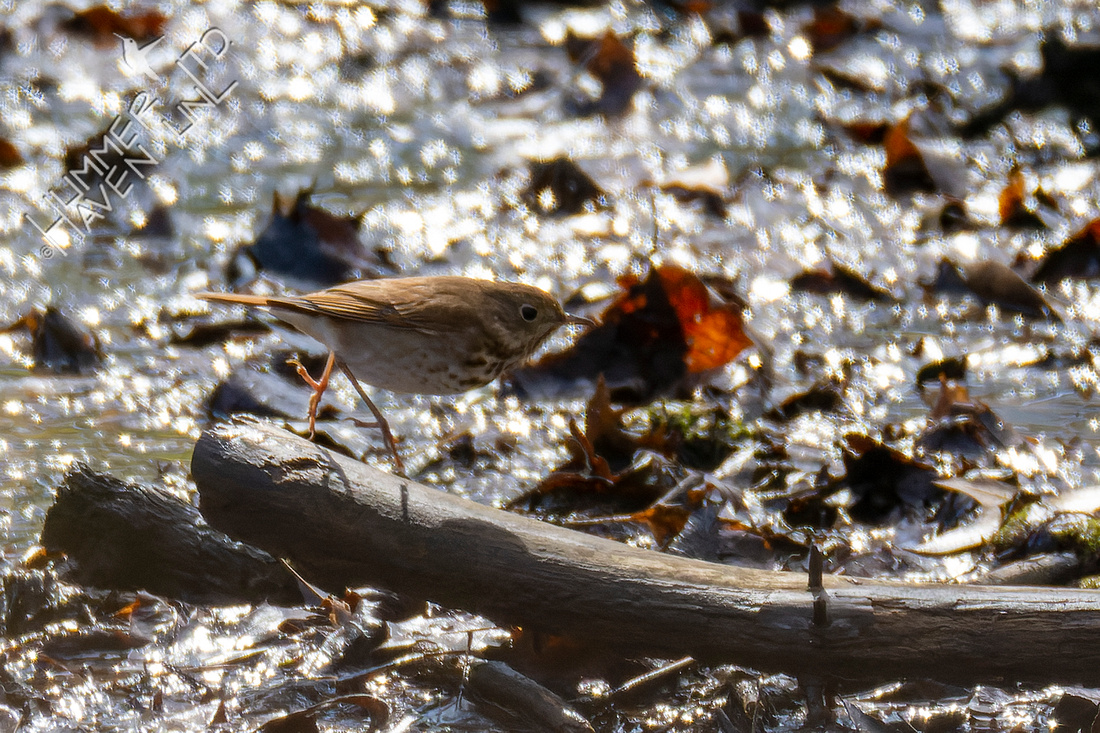 On 4-4-22, a Great Blue Heron flew over for FOY #54 and a bit later I spotted our FOY #55 Hermit Thrush. It has a distinctive way of moving along quickly, then stops and flicks its tail up, then lowers it slowly. 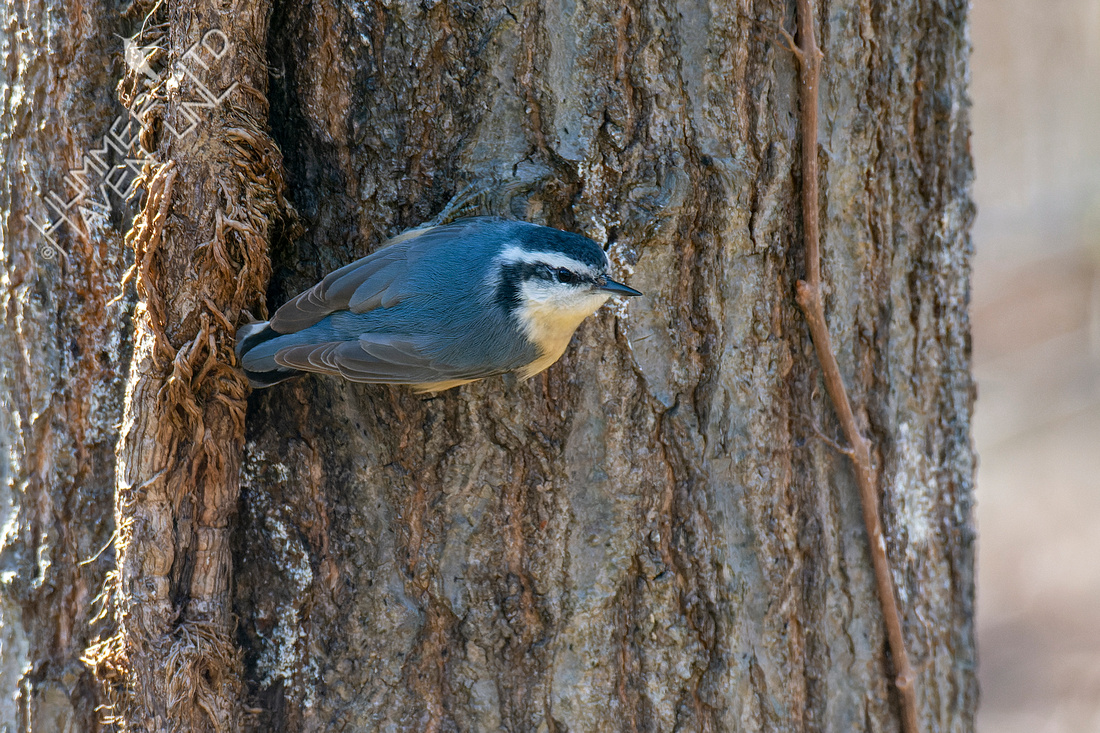 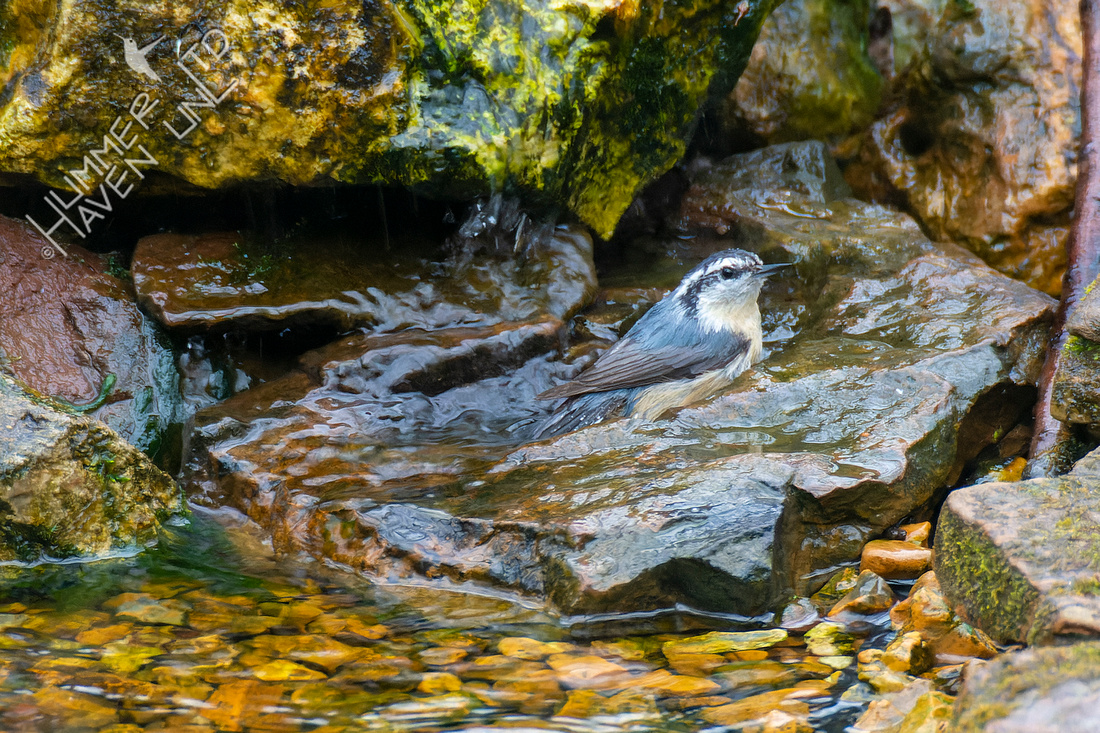 Red-breasted Nuthatches are still around, sometimes I see two males and a female. The two males are pictured here, the second one lighter than the first. 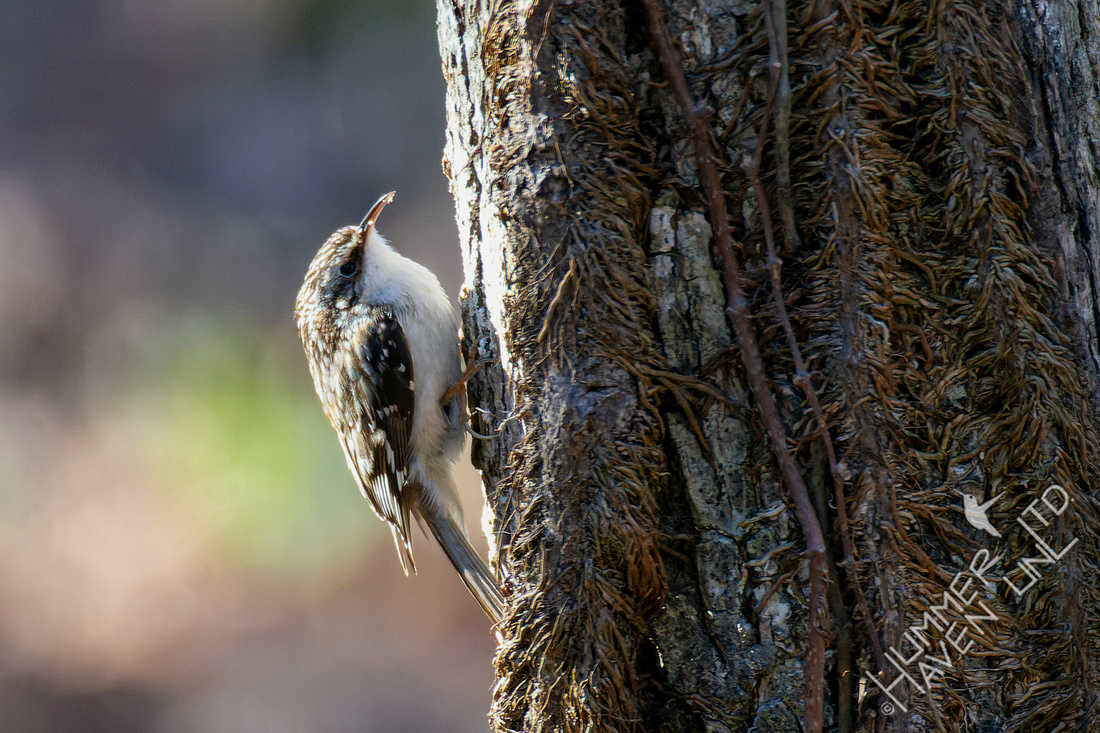 Brown Creepers are still foraging on the trees, sometimes on oaks, cherries or maples. 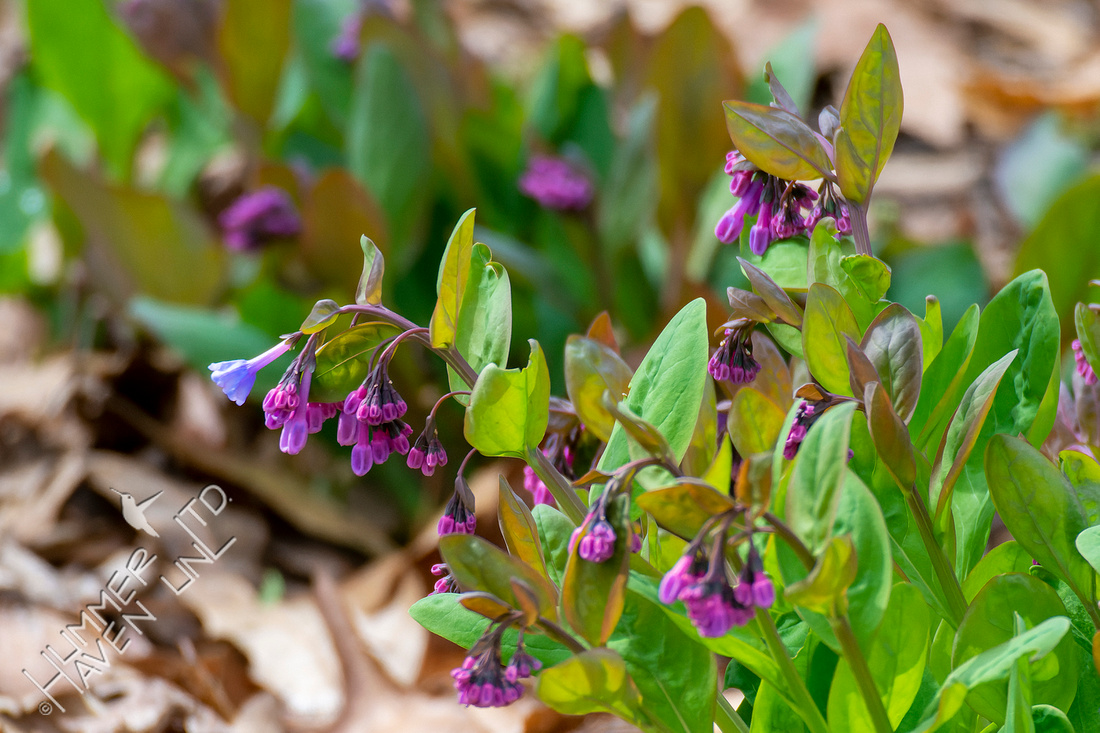 Well, it's time to get those hummingbird feeders cleaned up and ready to go. Ruby-throated Hummingbirds will be coming in soon, along with warblers ready to refuel from their long hauls, too. It has been cool and somewhat slow, but Spring is springing!

Joe Carpenter(non-registered)
A few years ago a distressed American Goldfinch crash landed on the hood of my car during rush hour at Hampton and I-64. It was a low ceiling and he was probably consumed by auto fumes. He then slid under the windshield wipers. I drove slowly until I got to the Skinker-Clayton Rd exit. Got out and scooped him up and put him in my car on the dash. He was thirsty so I gave him some water. He seemed curious, content and relaxed. I then drove him to the water fall in Forest Park. He hopped on my fingers, we got out of the car and he flew away. He did peep at me on his initial flight.