Truth is, you'll hear more birds than you see,

and you'll see more birds than you can possibly photograph. 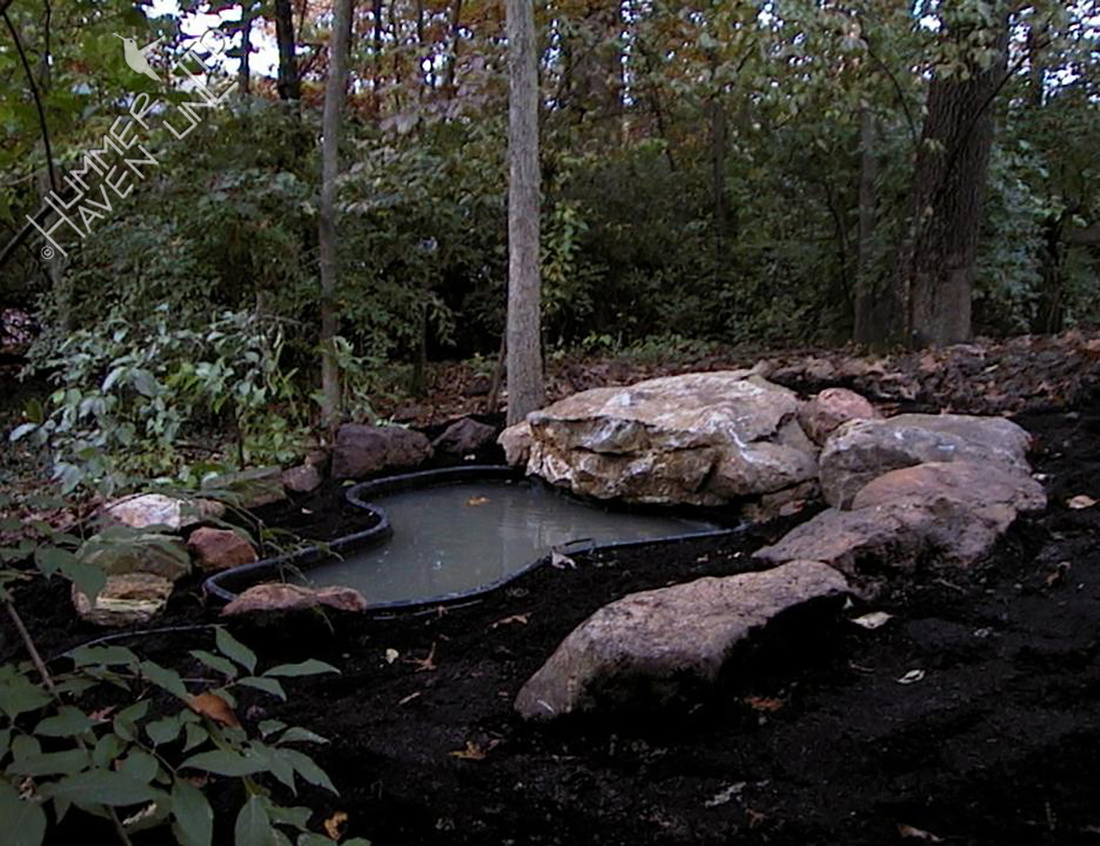 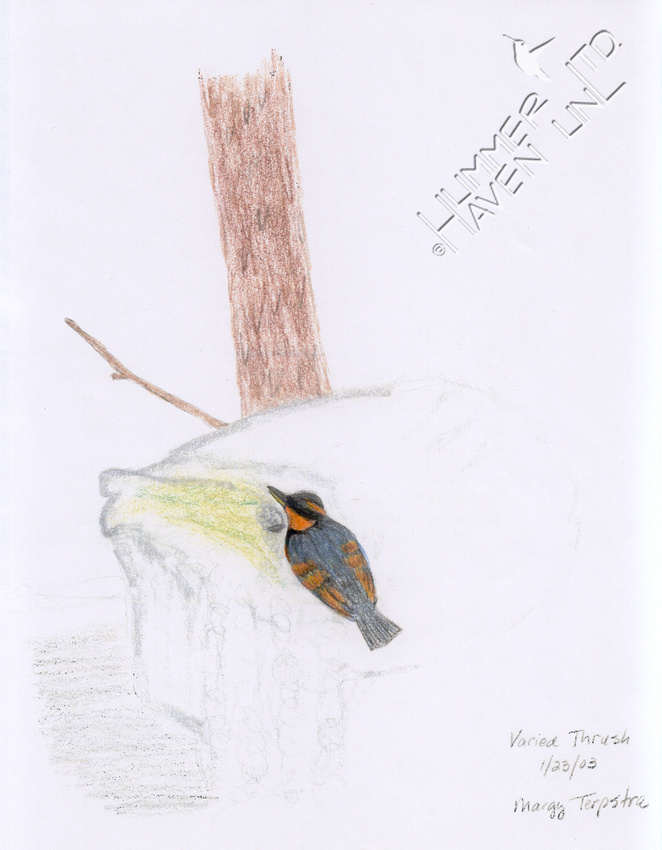 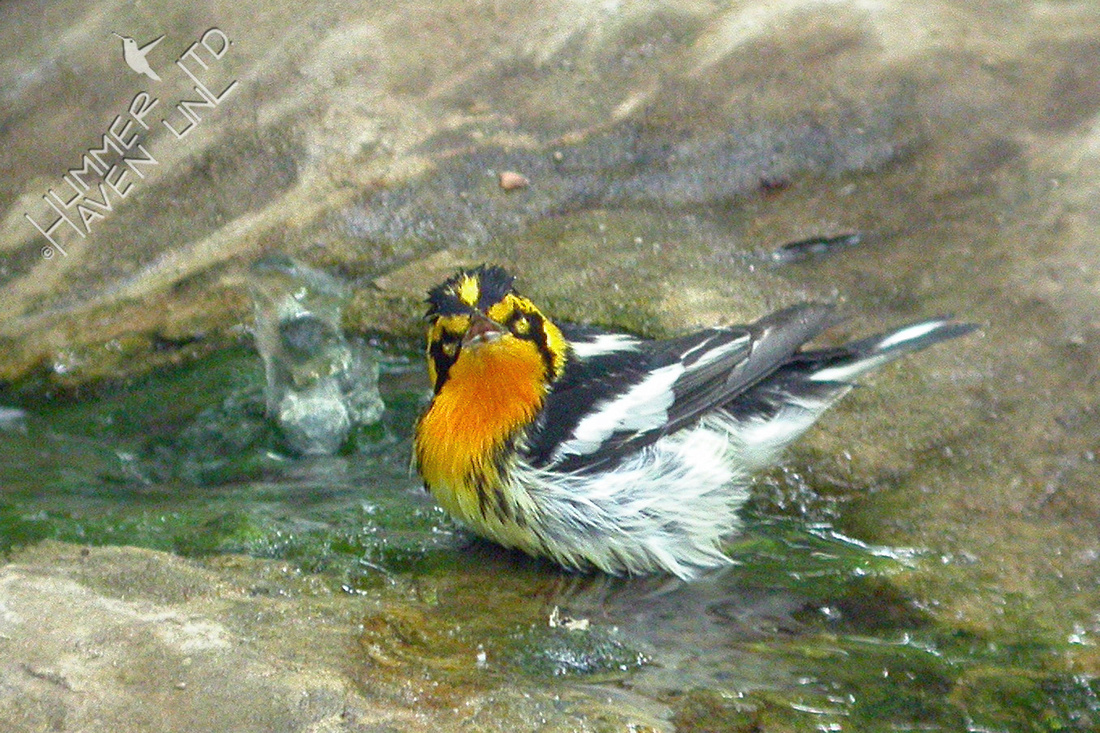 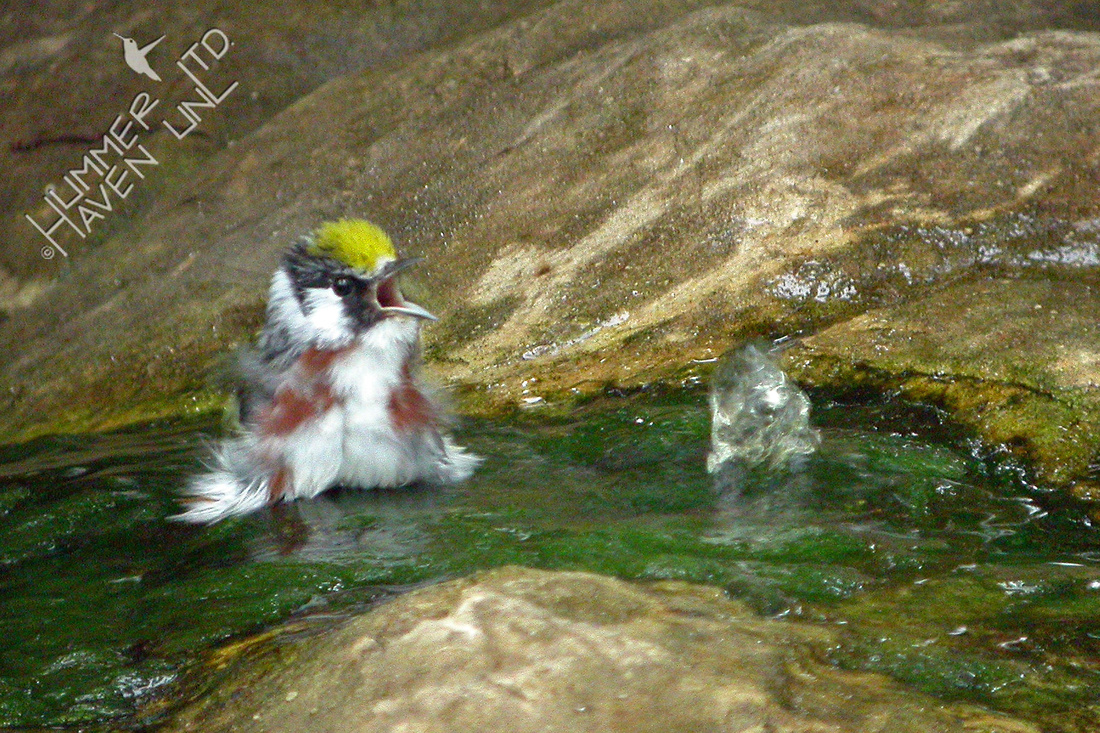 Birds began coming to the Bubbler within a few days after it was completed on 10-22-2000. After a visit by a Varied Thrush on a wintry day in 2003, the tenth record of this species in Missouri, it became time to put aside colored pencils and document birds with photographs. Dan helped me get set up with a digital camera. It was our introduction to the digital format of photography, with the camera connected to a spotting scope. It was cumbersome, it was slow and it was certainly challenging to focus on fidgety little birds! It did teach me patience, however, and ready or not, the birds kept on coming. Blackburnian and Chestnut-sided Warblers have always come down through the trees to enjoy the water feature. These images were some of the first taken with that digiscoping setup.

Spring is always exciting because these neotropical migrants are in their vibrant breeding plumage. Fall is another story entirely. Some species look about the same, and some have molted into a duller version of themselves that almost looks like a totally different bird. 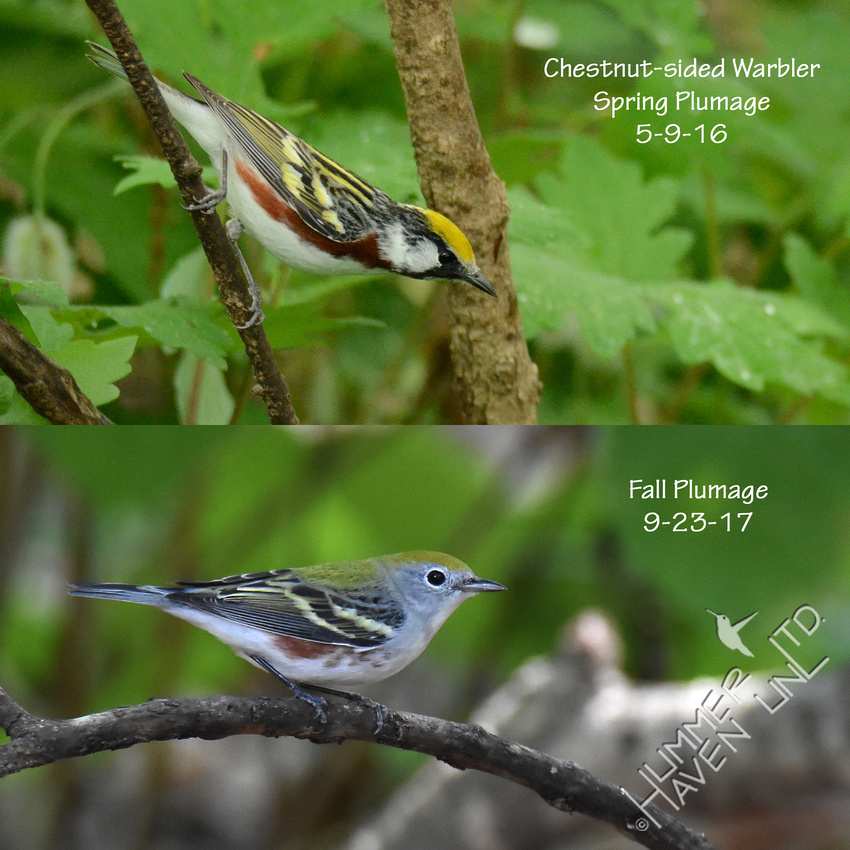 Chestnut-sided Warbler in Spring and Fall 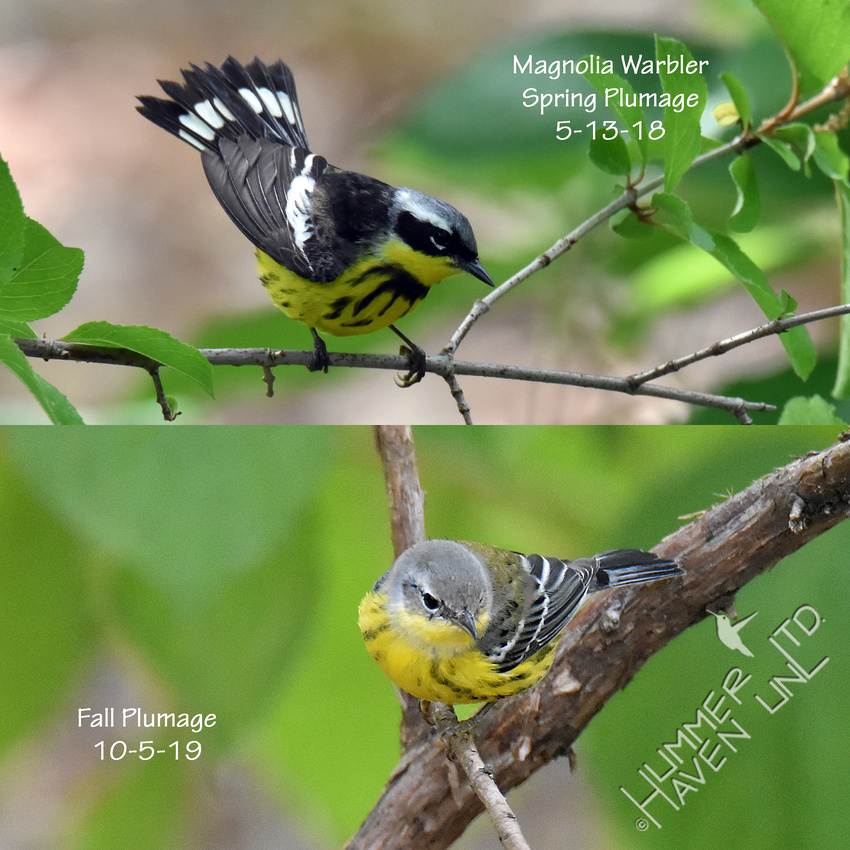 Magnolia Warbler in Spring and Fall 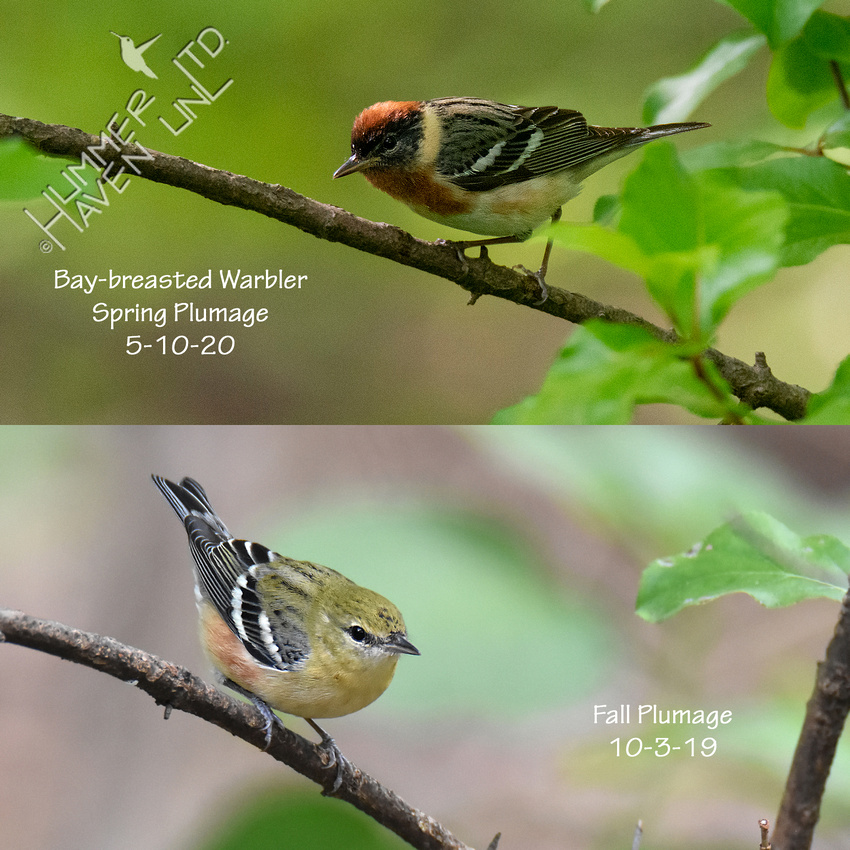 Bay-breasted Warbler in Spring and Fall

These composite photos display the changes in their attire that are protective camouflage as they return to winter homes. It helps them blend ever so easily into the softer greens, yellows and rusty shades of autumn. This attribute also makes them more difficult to watch and identify as they move along the branches and grab caterpillars off the native plants. Add in the new first year birds of each species, and well, it's enough to make one's head spin! 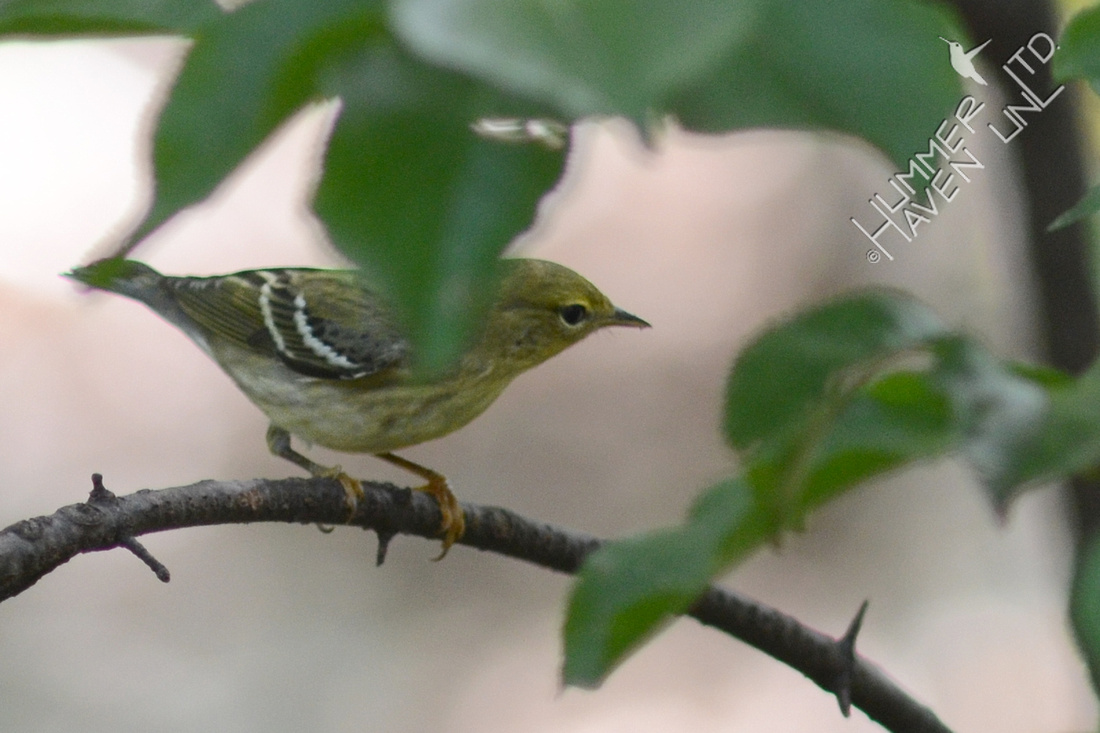 Now, I have not seen every warbler species in every year. But over the 25 years we've been here, I have seen all 36 of the most likely warblers to be seen in our area. This is the third year that we've listed 29 species. Adding another species this fall would set a new record for our sanctuary. Yellow-throated, Cape May, Black-throated Blue, or Hooded Warblers might show up. A rarity is possible. The photo above shows a first year female Blackpoll Warbler that was here on 10-4-13, a third fall record for this species in Missouri. Doesn't it look similar to the Bay-breasted Warbler above it? Its orangey legs are key to separating it from the other species, and though only one photo was taken, it was enough documentation for that record. Most Blackpolls migrate much further to the east but it is likely that there are more in Missouri that get lost in the shuffle. Our yard does seem to be a "migrant trap" and is just very attractive to these tiny birds.

For those who would like to take the Fall Warbler challenge, here are a few quiz photos. Answers will be posted next time!

You may also want to check out this updated gallery to study the birds and search for the answers. It will open in a new tab for comparison. 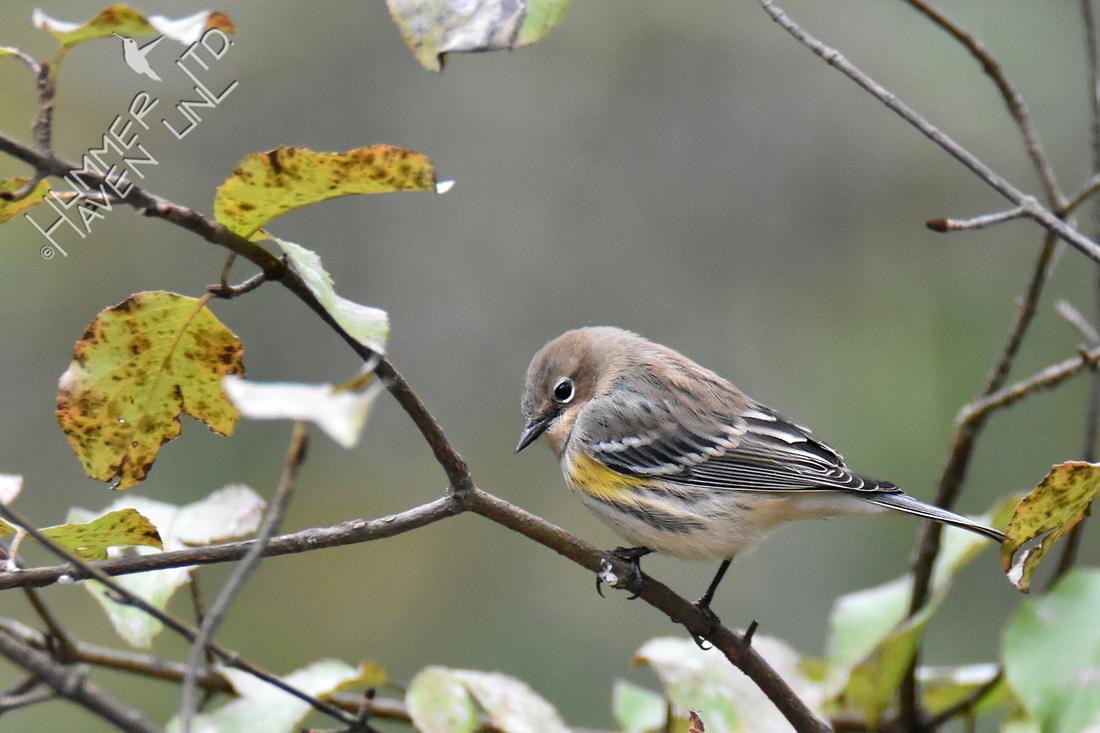 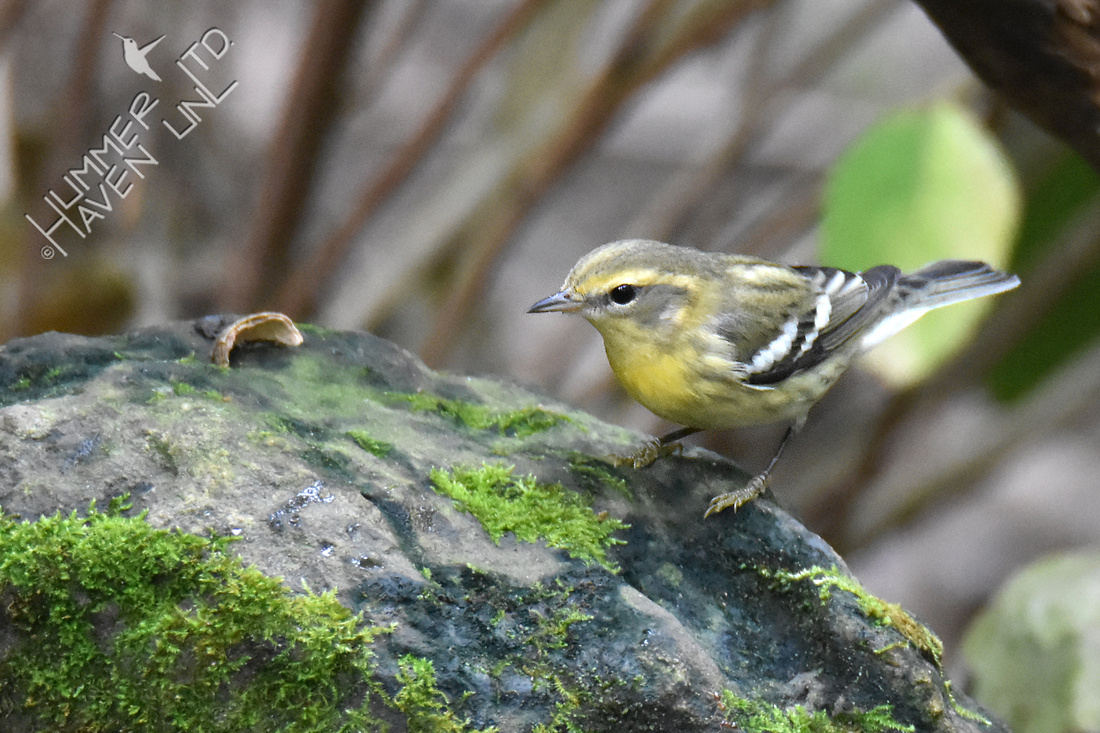 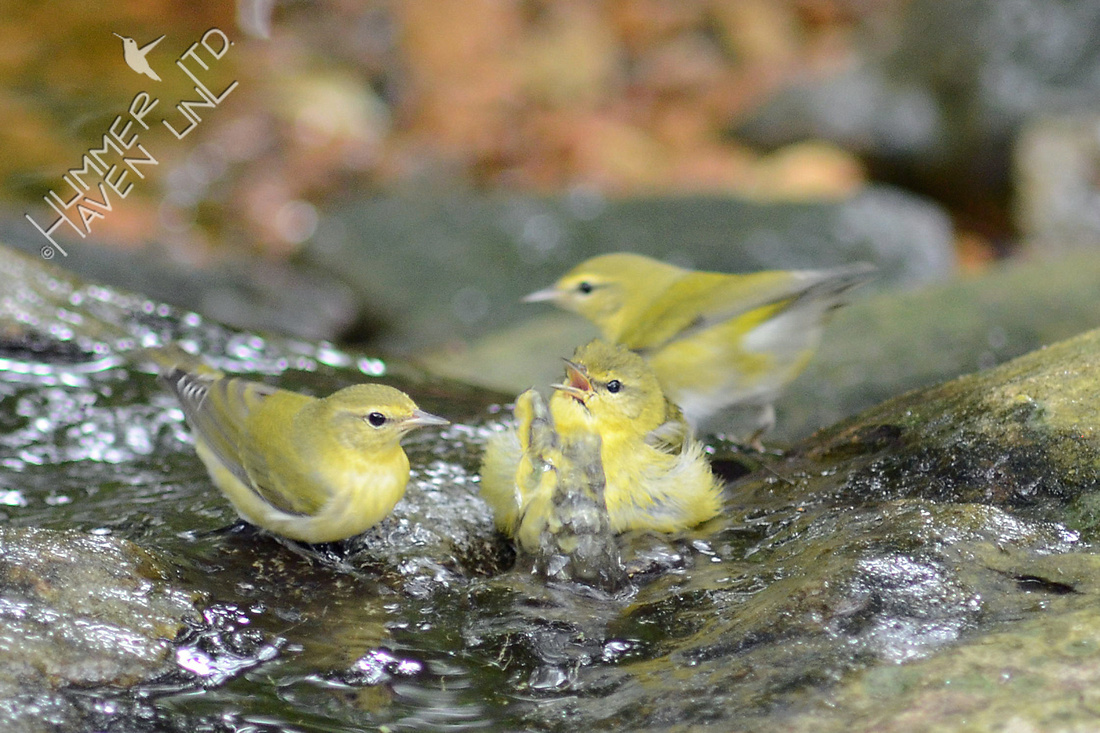 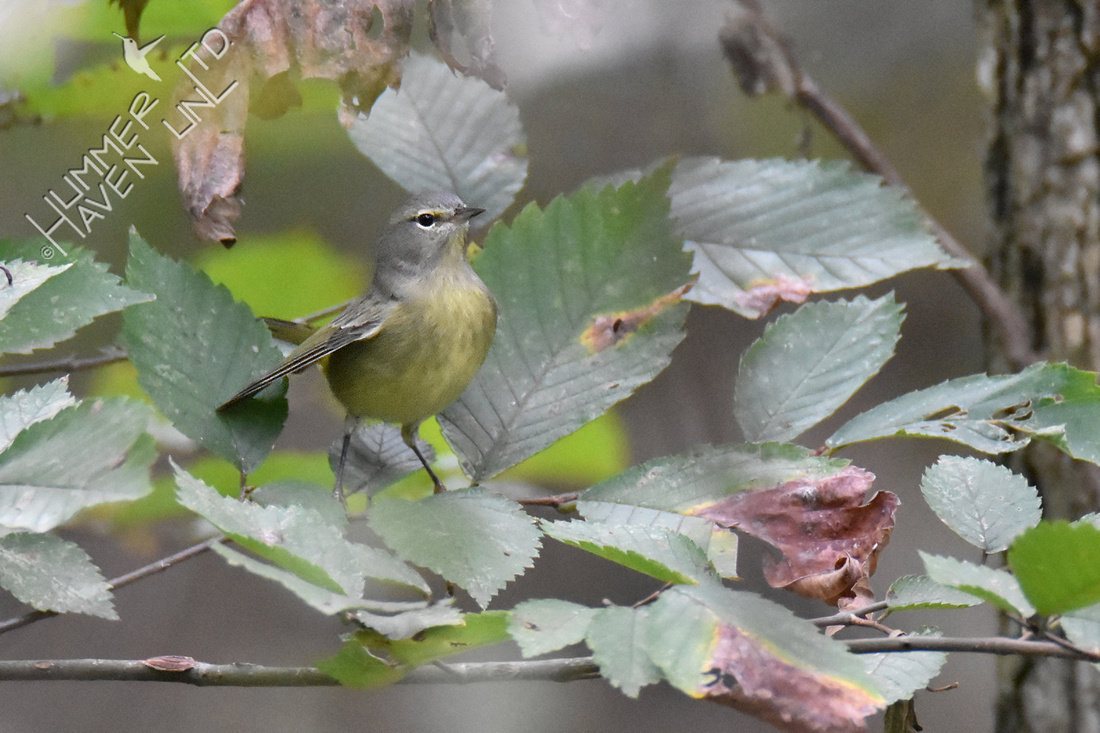 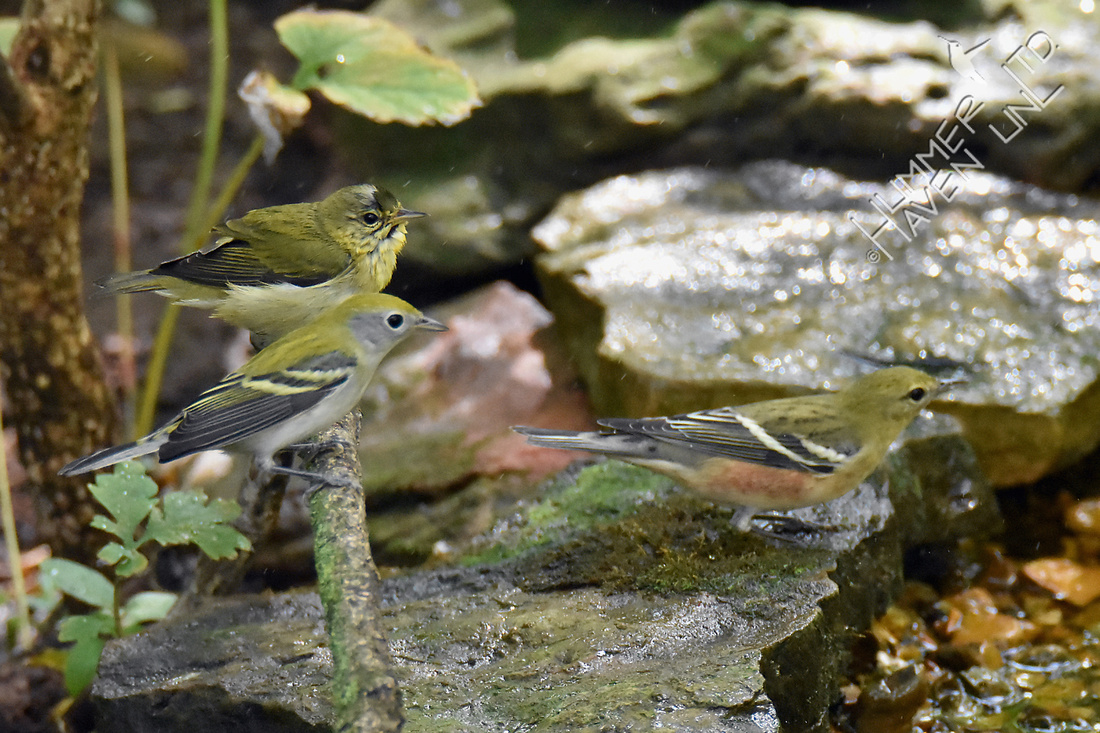 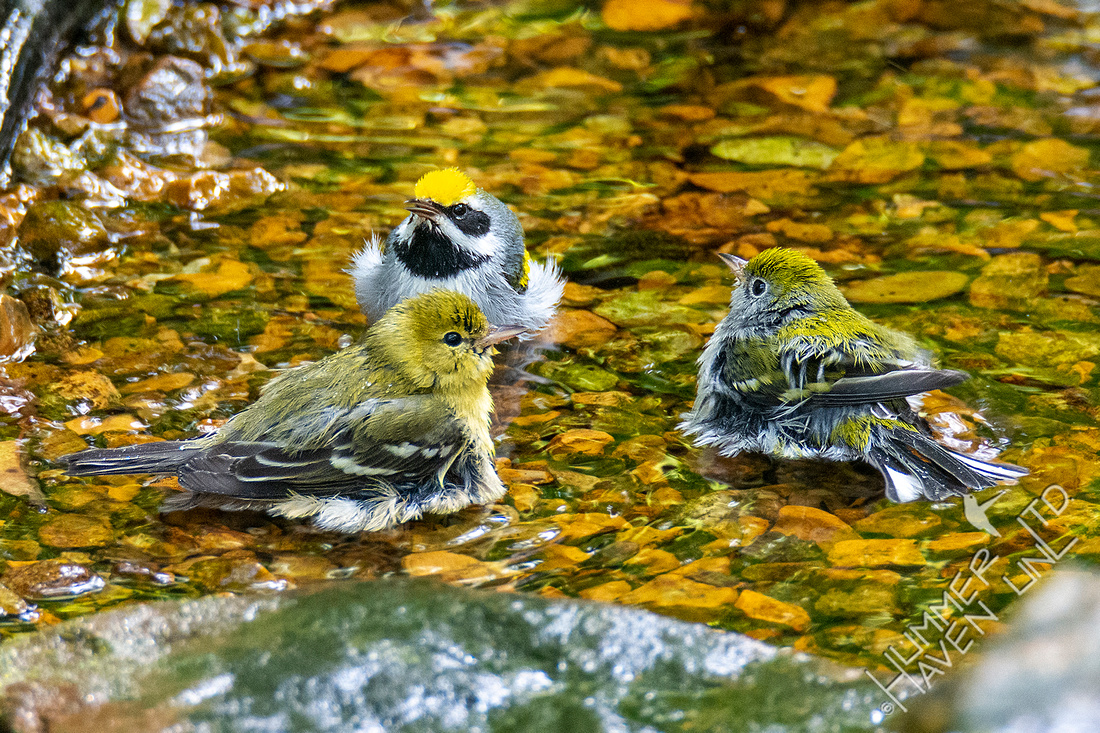 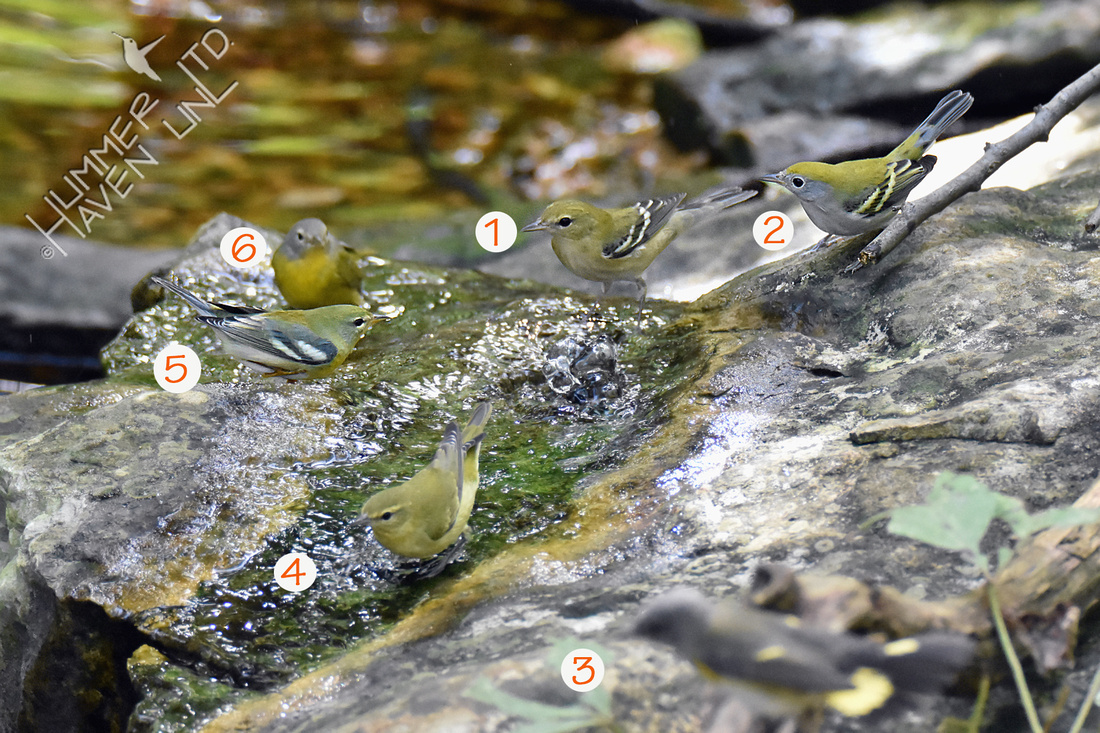 Remember to enjoy every bird!