Wow. It's never too early in the morning to make the wrong assumption!

Remember the hungry little caterpillar? I couldn't find it because it had crawled off to another leaf during the night. I discovered it a few days later and it had been changing dramatically into a "fifth instar" caterpillar. Instead of looking like a bird dropping, it had taken on the form of a formidable looking, large-eyed snake. 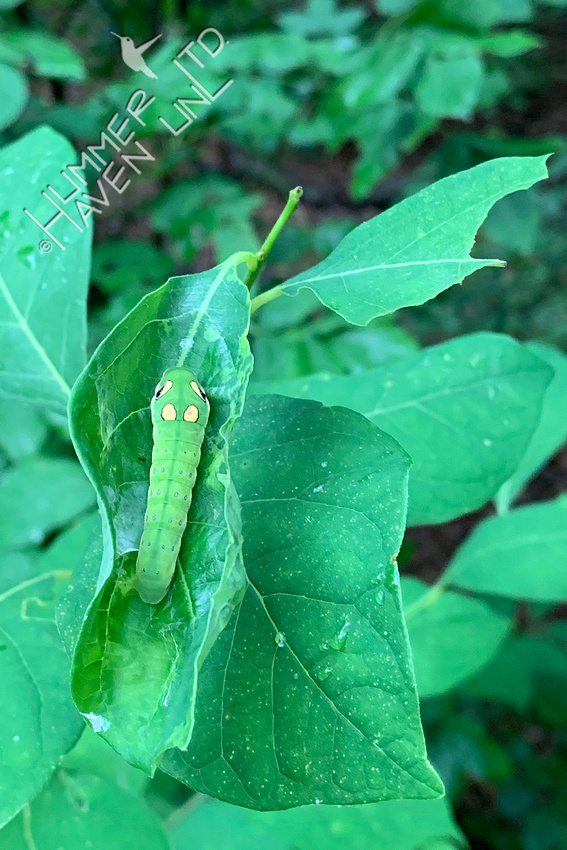 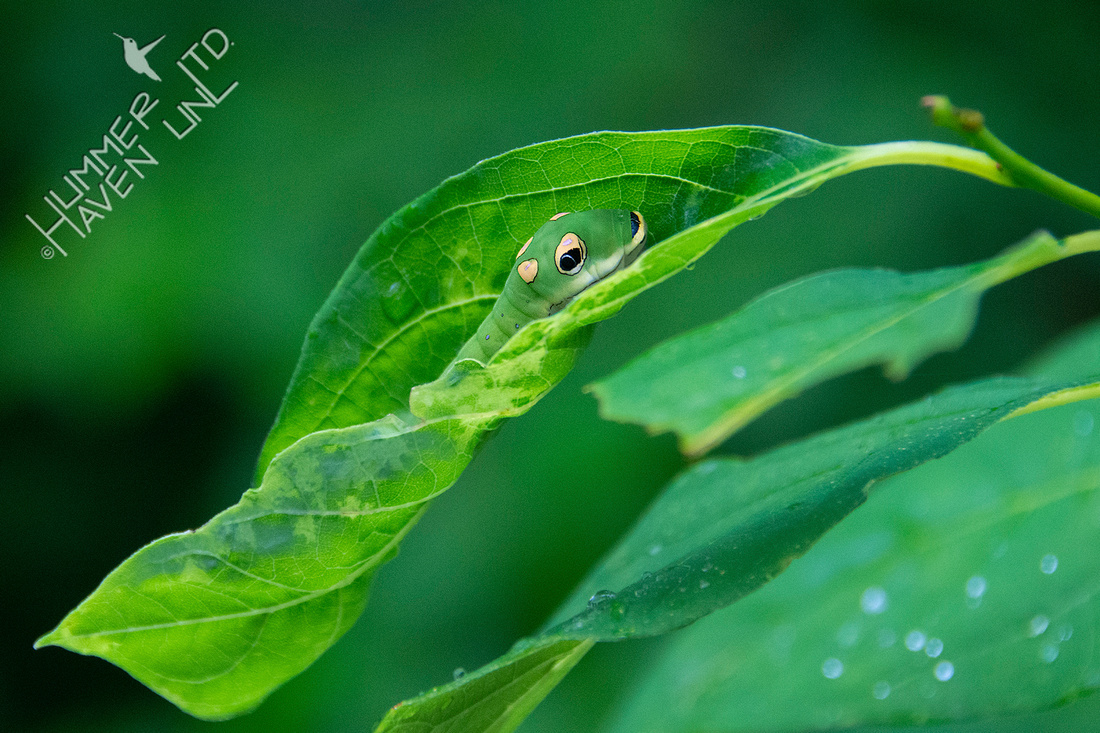 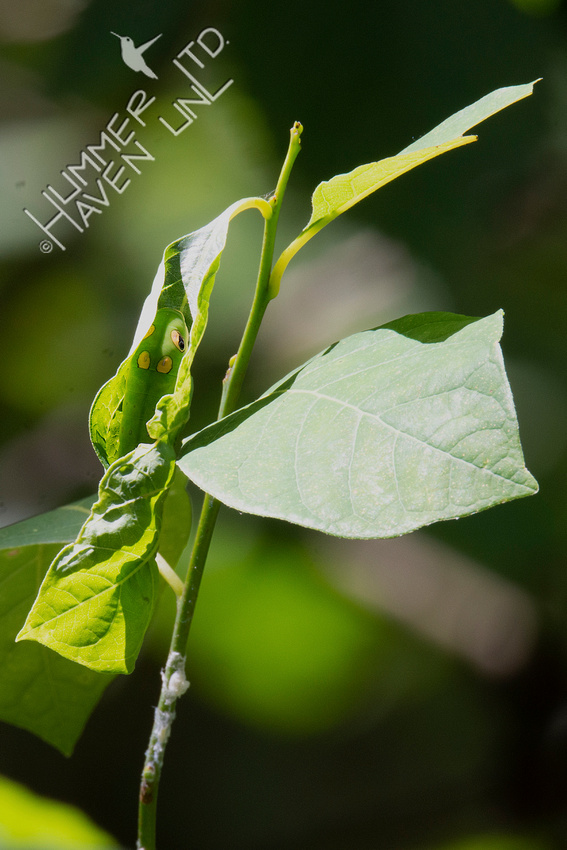 The last time I found it was on the morning of 7-3-20. By noon, it had gone AWOL again. However, I did find another small one on a lower branch of the same plant. 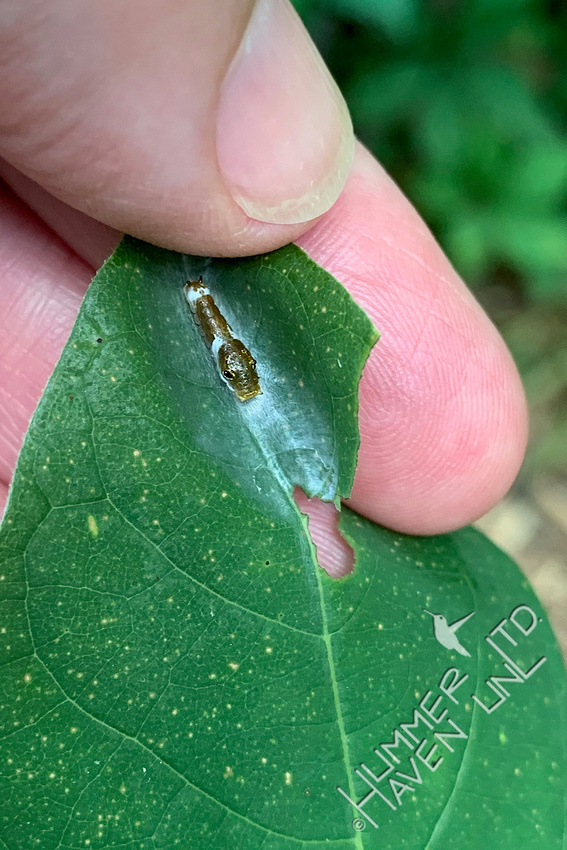 On the Fourth of July, I did another bee survey and found this interesting little Agapostemon species or Striped Sweat Bee. Its psychedelic coloring included violet antennae. That day, I confirmed a Monarch in the garden, though the photo was hardly in focus, it only stayed a millisecond. 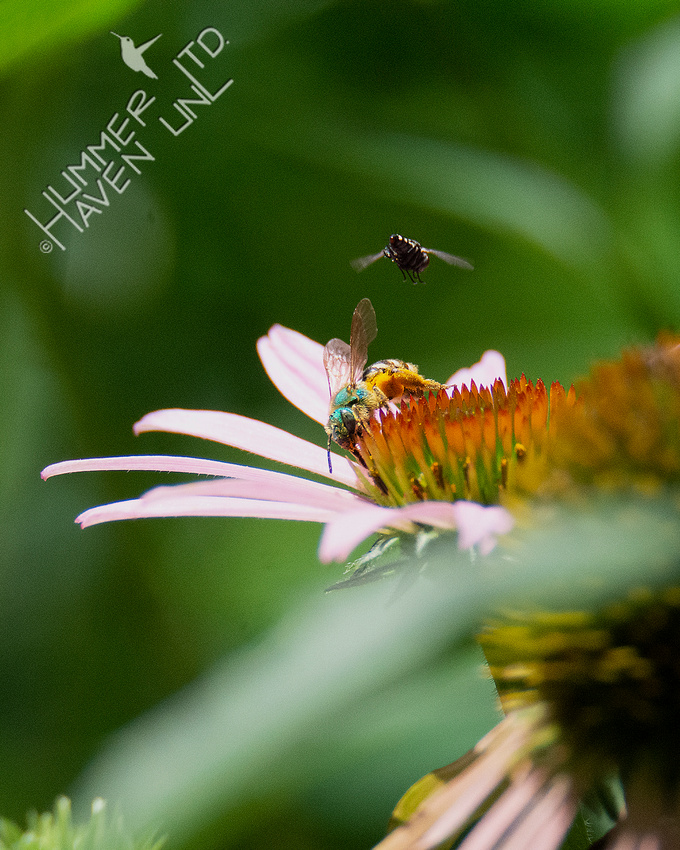 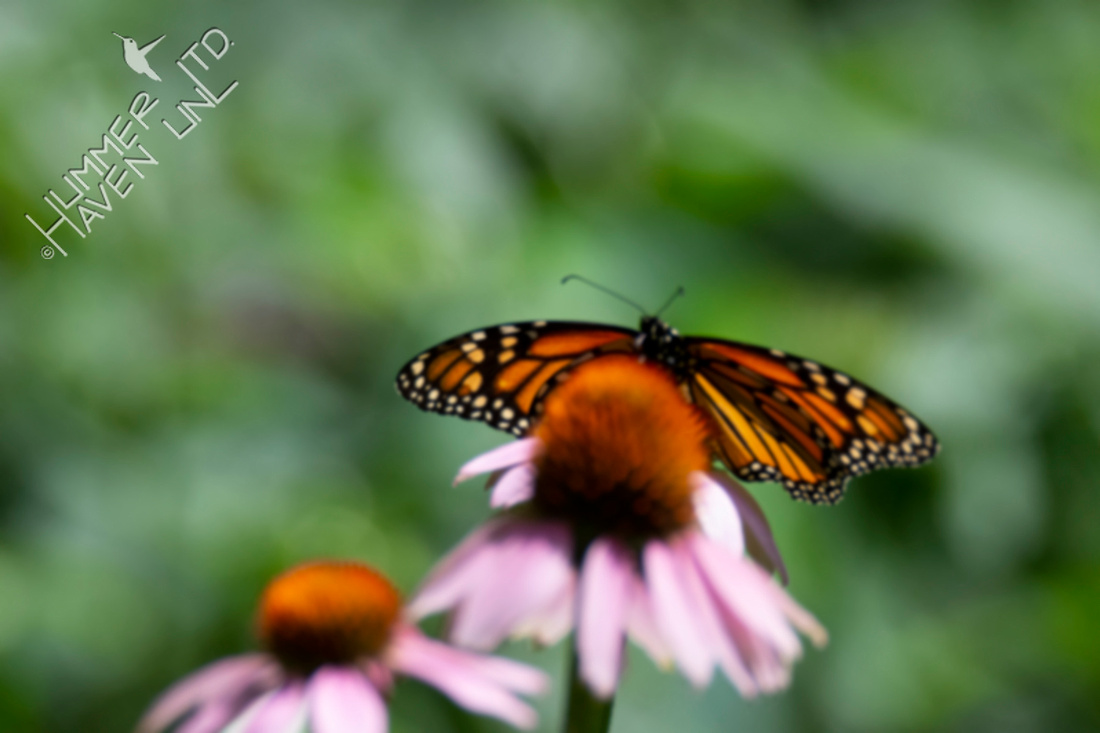 Tiger Swallowtails have been dancing in the garden, too. Just like the bees, they are all over the sweet balls of the Buttonbush (Cephalanthus occidentalis). 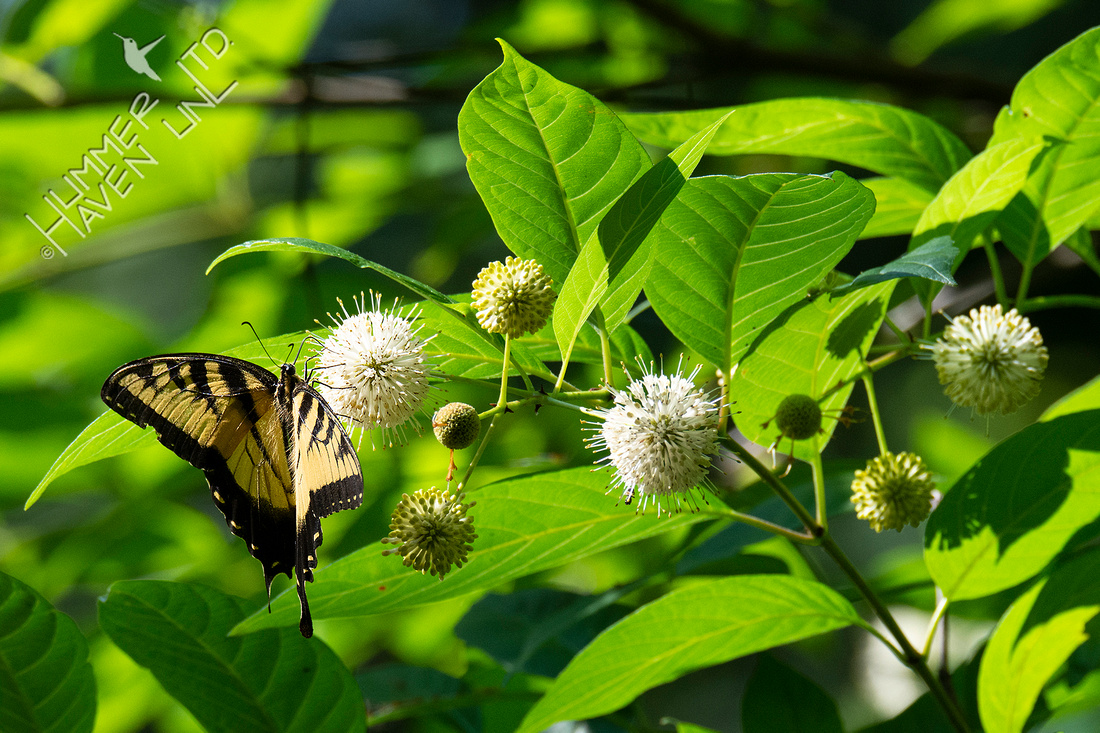 White-tailed does and fawns have been coming through. At times, the young ones really kick up their heels and chase each other. 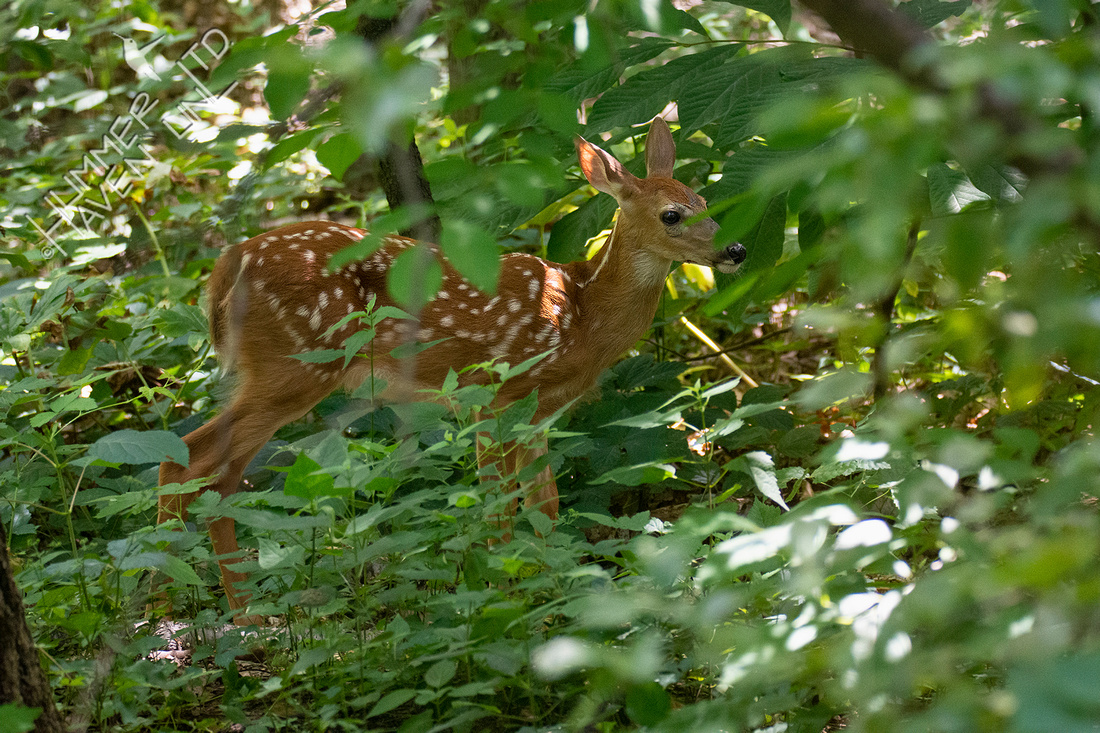 Birds have been busy feeding and getting into the water features. Mourning doves are sometimes seen in the morning or late afternoon. 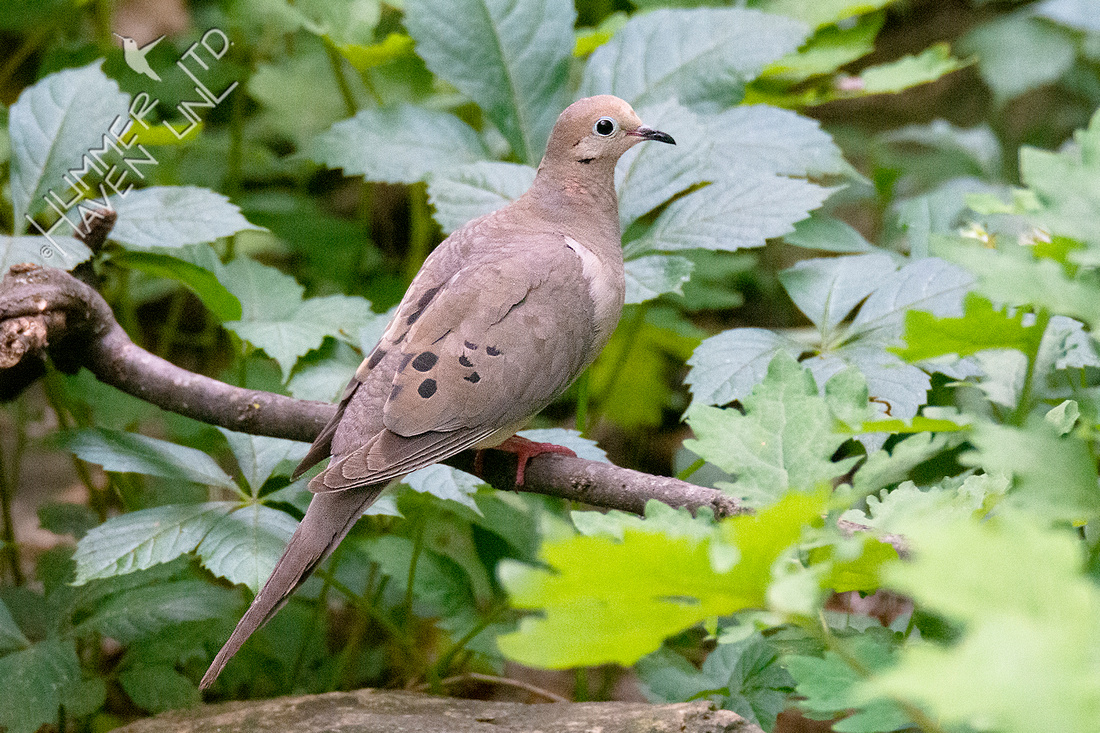 Youngsters are now coming on their own or in pairs. Northern Cardinals, Tufted Timice and Carolina Chickadees are frequent visitors. 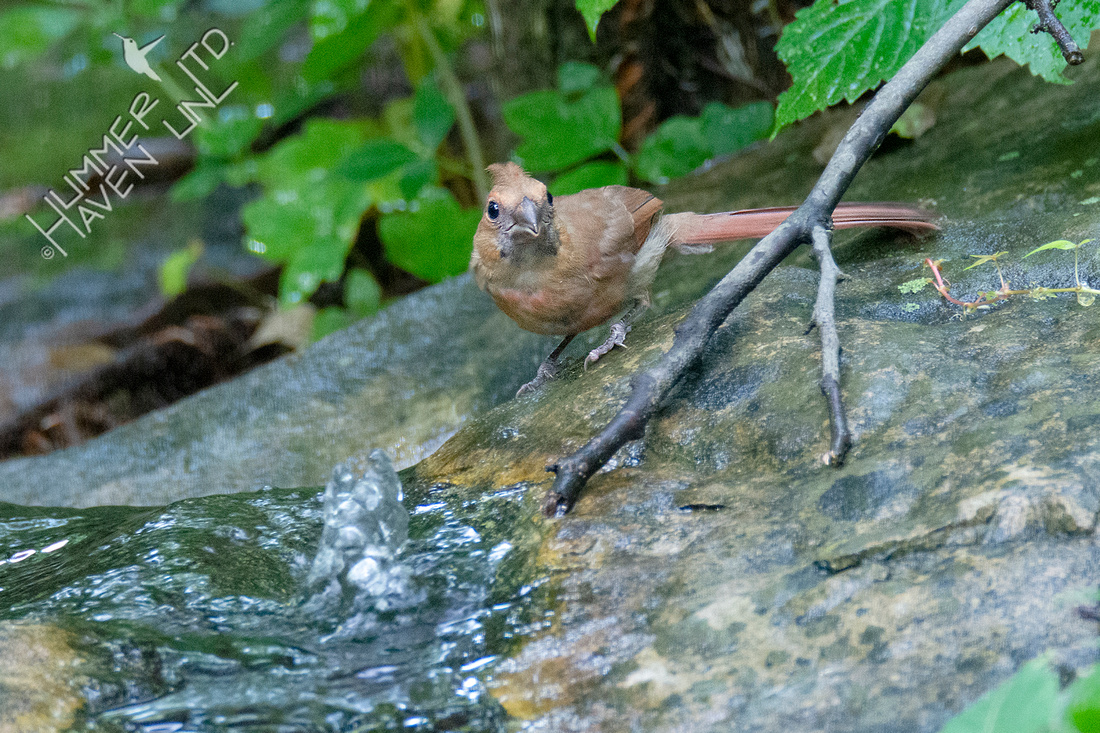 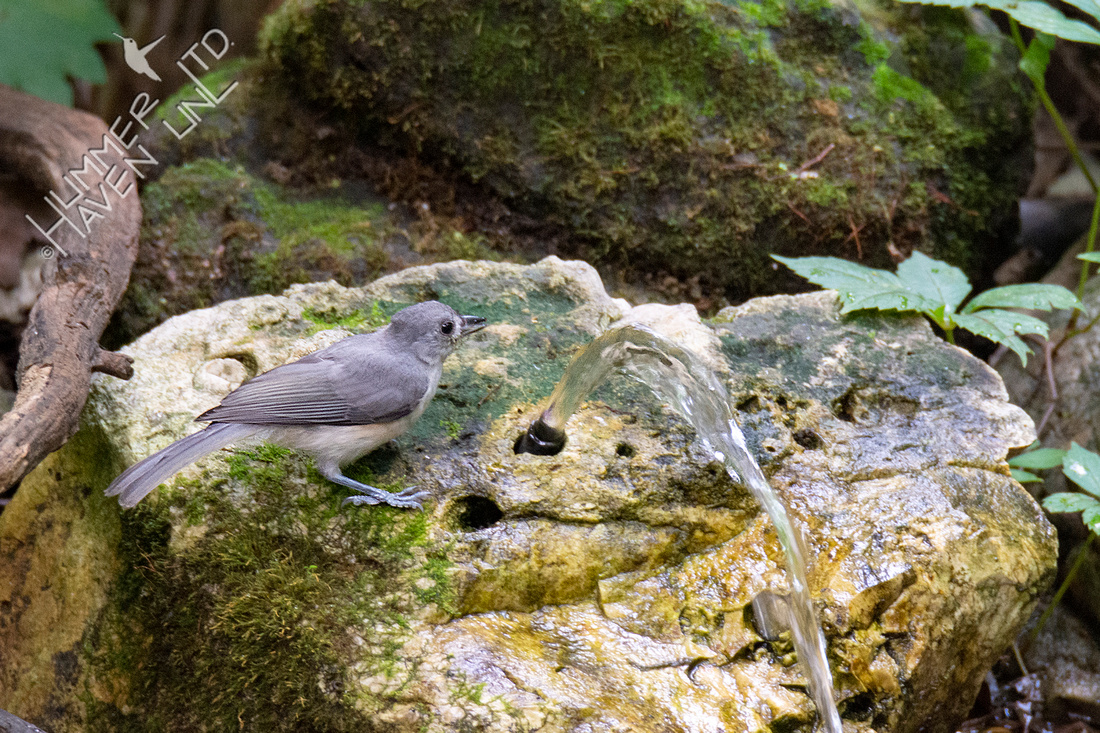 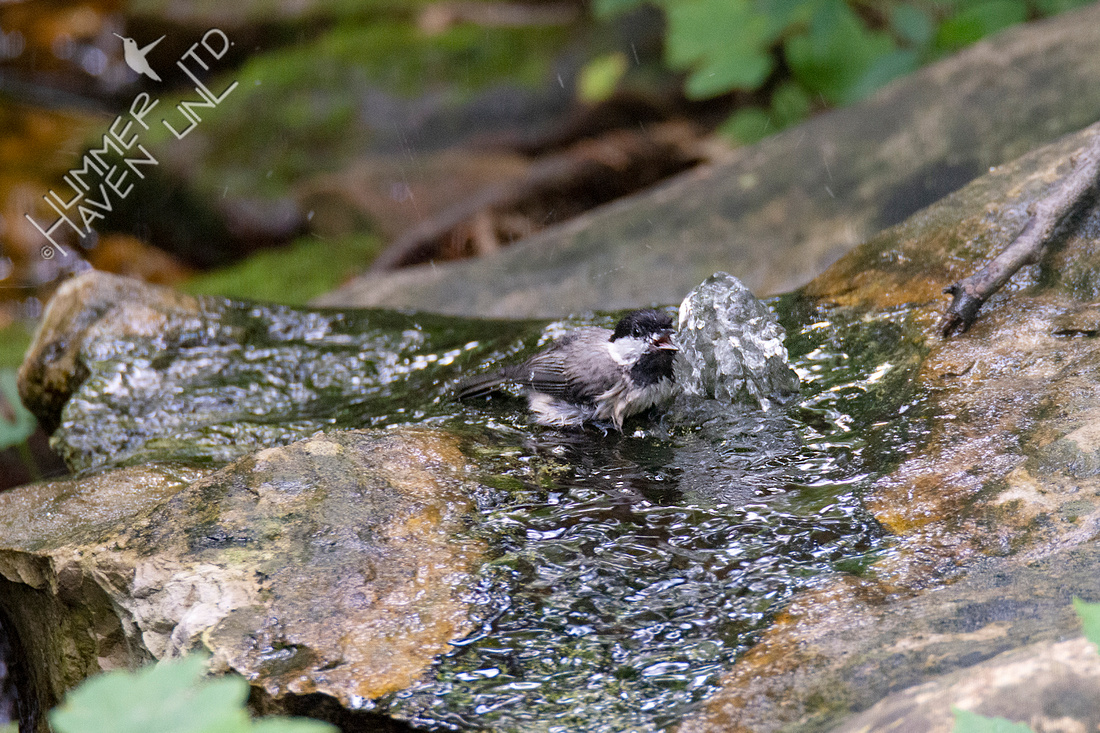 The bigger the bird, the longer it takes to raise them. American Crows have a lot to learn from the adults. The sump puddle has become a bit of a classroom for them, and they are noisy about their lessons. 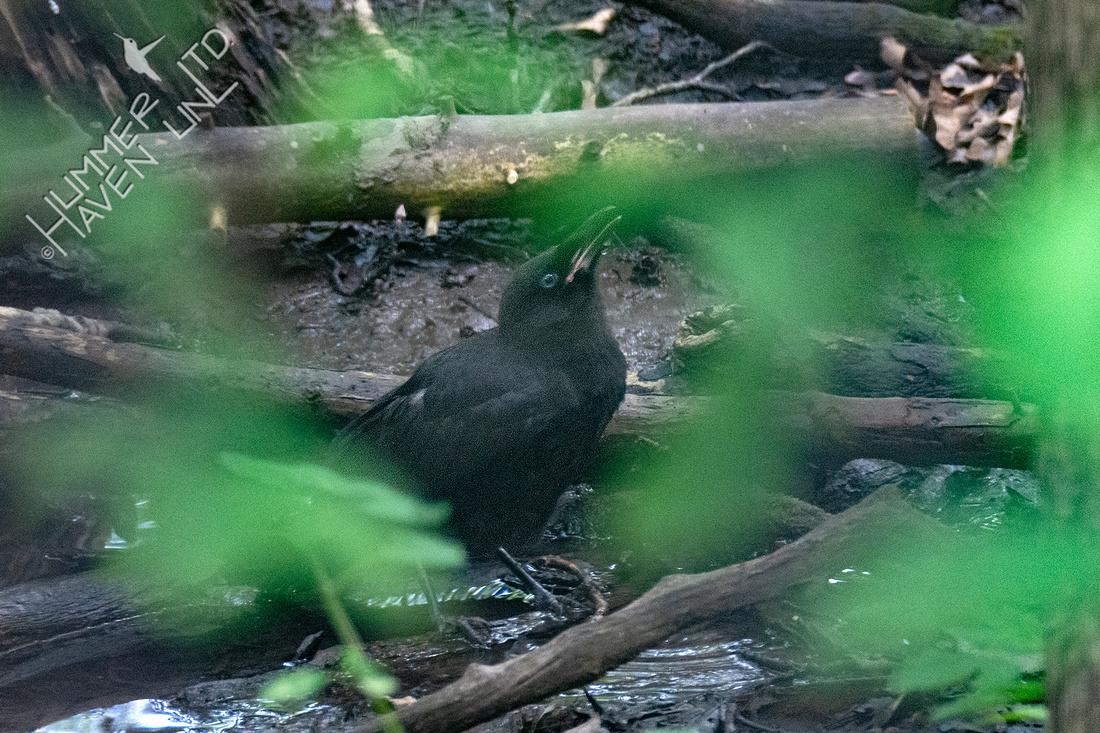 All thrushes, like these American Robins, do love to bathe. They're quick studies when it comes to claiming ownership of a water feature. 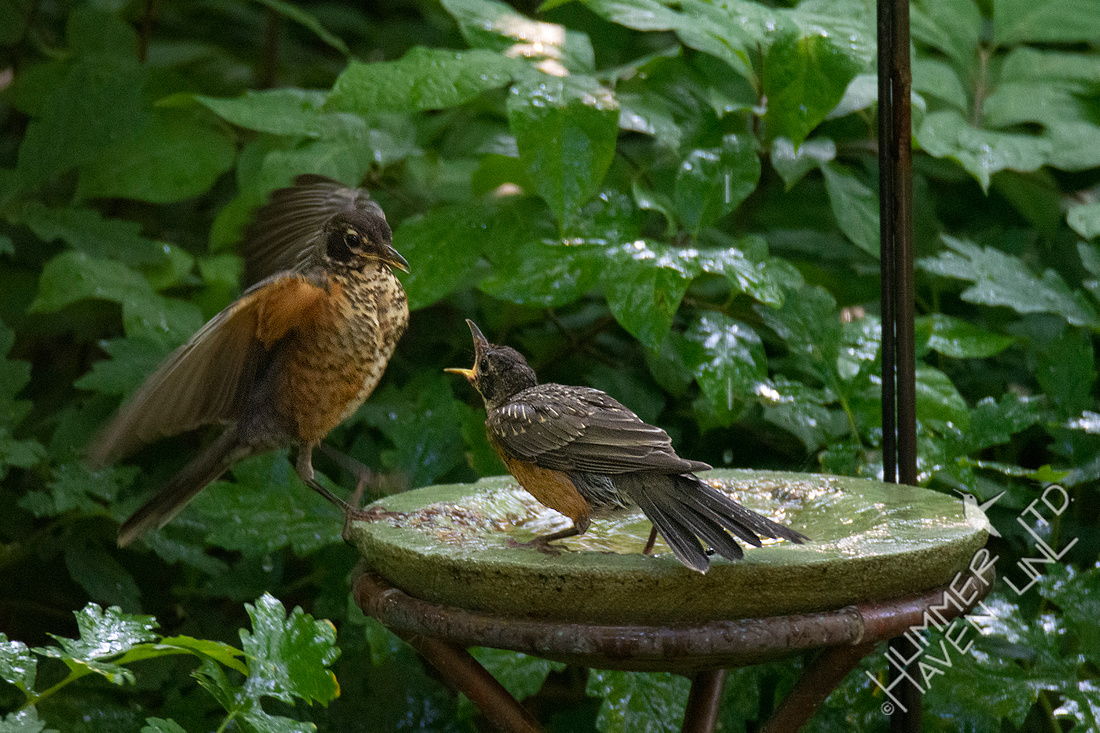 Two young Cooper's hawks have been investigating the basin this week. The larger one is probably a female. It seemed to be having some difficulty keeping lunch down. 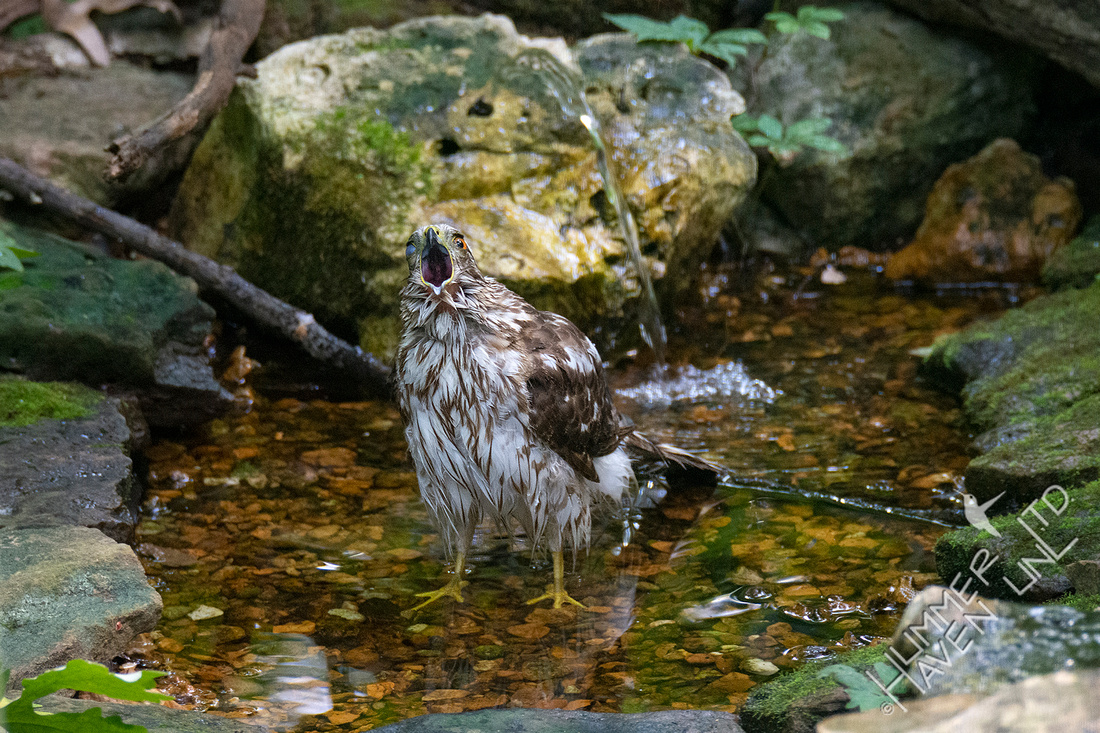 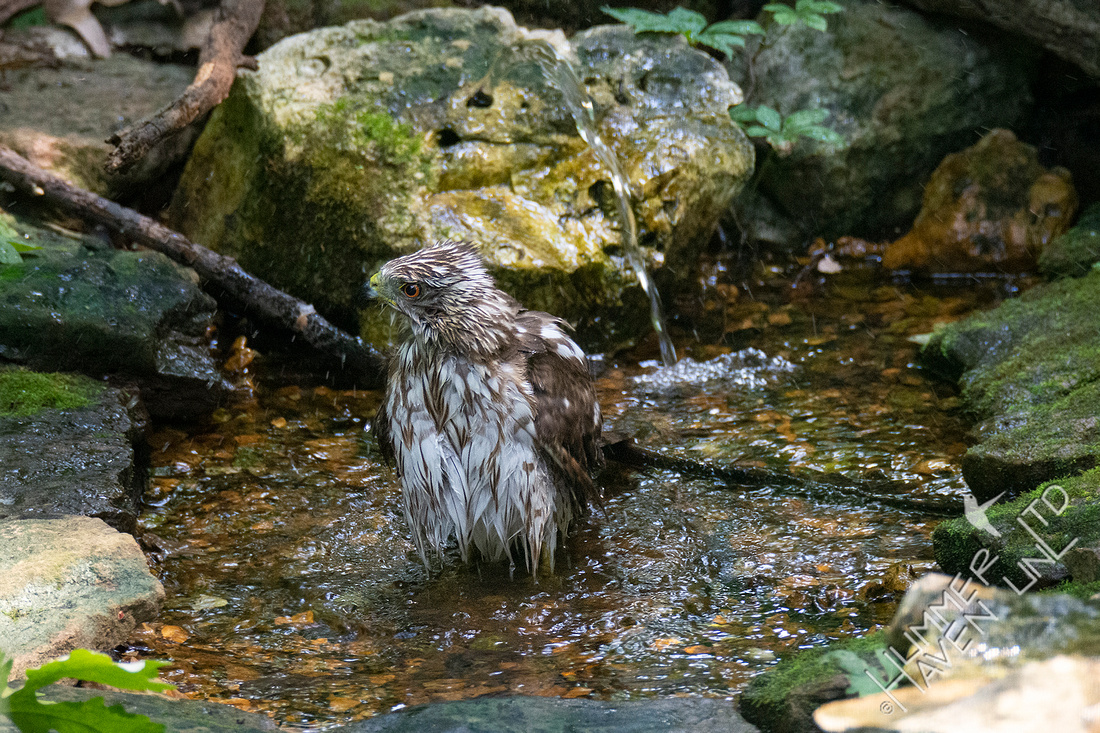 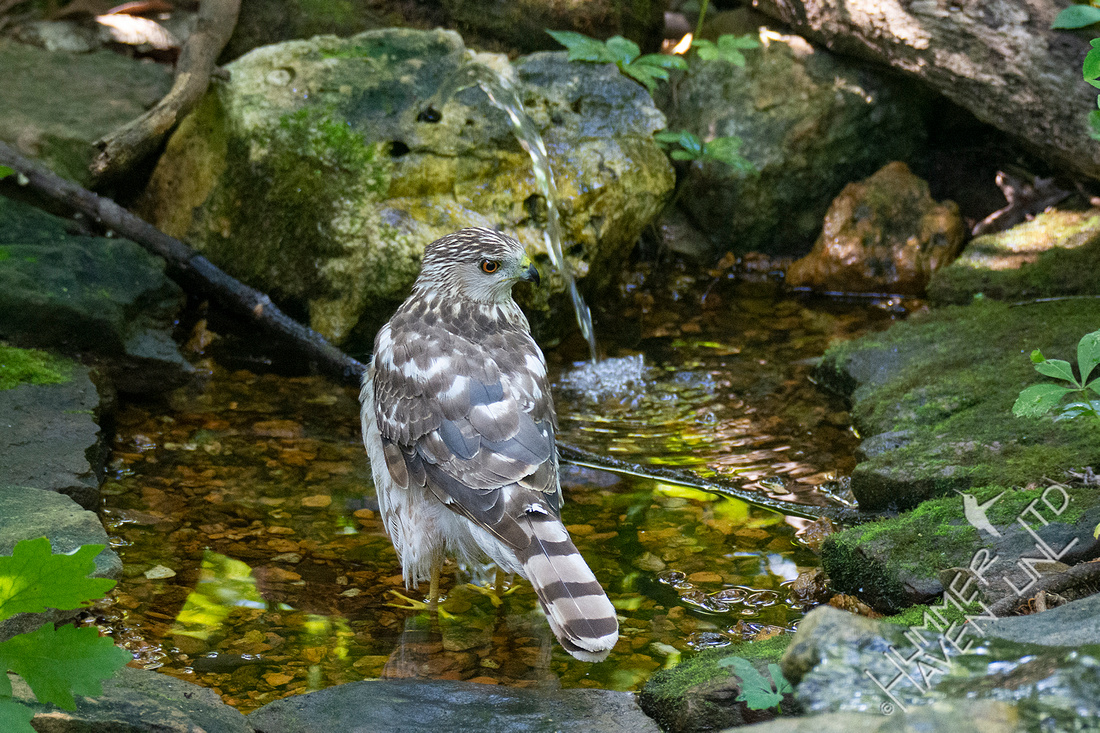 At least one female and two male Ruby-throated Hummingbirds have been seen fairly regularly in the yard. One plant that is not native, but one I keep for them is this Salvia x Black and Blue. It has a high sugar content in the nectar and they really go for it. It keeps their energy up for catching tiny gnats and other insects. 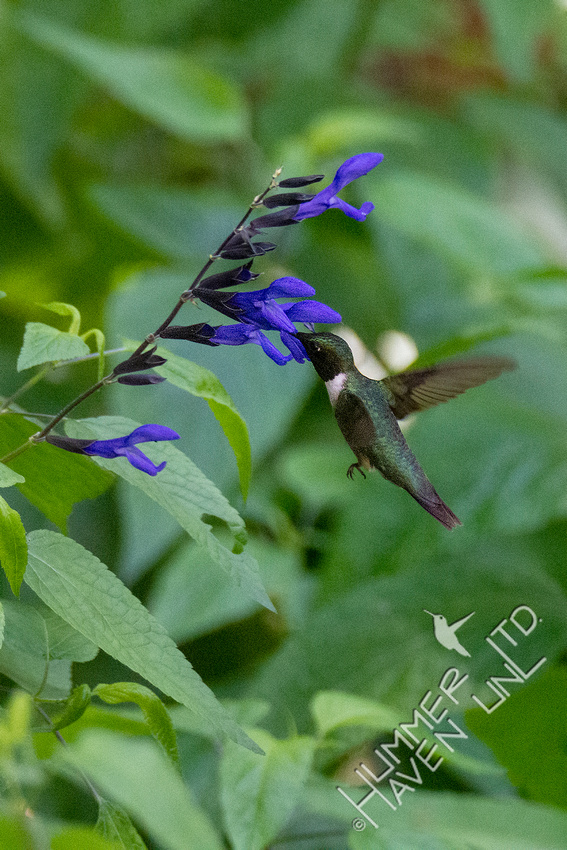 The American Goldfinches are checking the Purple Coneflowers (Echinacea purpurea) for seed already. It's definitely a favorite of theirs. 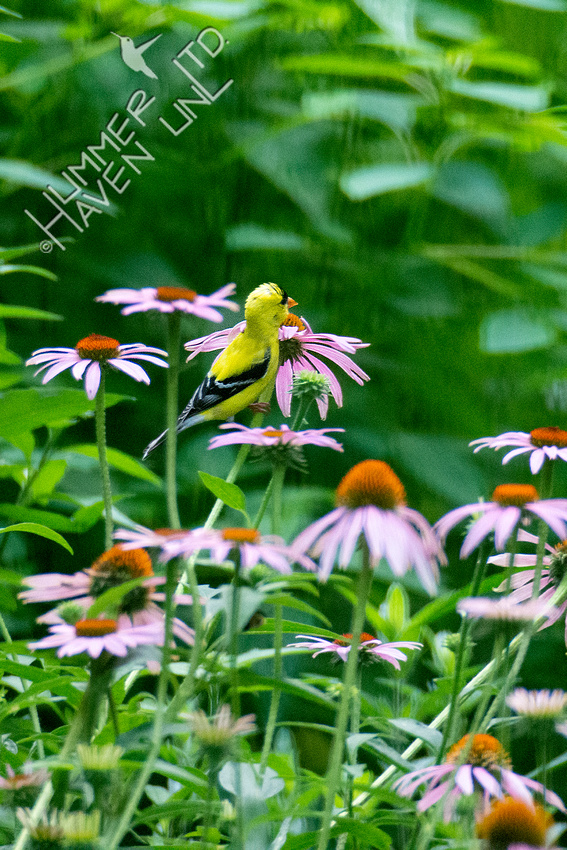 Part of my time the last few weeks was spent in completing a project that's been on my list for a couple of years. Fall migration is fast approaching, believe it or not. Identifying warblers during this season is much more difficult because many of the birds don't just look dull, but look completely different. So, here is a link to a new gallery that shows an introductory slide for each species in the spring, followed by a variety of images of that species in the fall. There's even a quiz near the end. Have fun!

Barbara O'Brien(non-registered)
You never fail to thrill!!
Nancy Clogston(non-registered)
Dear Margy, I just immersed myself in your July blog with the Spring and Fall warbler plumage collection. What a fantastic collection of photos! I will be returning to this site often to study up on the warblers. I really appreciate your putting this together for real-life easy comparison. I also like how you identify the insects and the plants that attract them.
Thank you, as always, for your outstanding photography and for promoting care for our natural world. It's a gift you give to us all.
No comments posted.
Loading...
Subscribe
RSS
Recent Posts
8-8-22 Spicebush Swallowtail Caterpillars and more Be on the lookout! 7-26-21 Mid-July! 7-15-22 It's a steamy Fourth of July 7-4-22 Summer Days now 6-24-22 Let's talk about warblers! 6-13-22 Migration wanes, into June now 6-4-22 More birds of May 5-17-22 First week of May, 5-8-22 Migrants are on the move! 4-30-22
Keywords
bubbler pond rusty blackbird mink fox Tanager bluebird basin warblers Purple Finch
Archive
January February March April May June July August September October November December
© Hummer Haven UnLtd.
Powered by ZENFOLIO User Agreement
Cancel
Continue