We did have our break in the cold and it lasted a few days.  The ice eventually melted in both ponds just long enough for an uncommon bird to come in.  We were sitting in the breakfast room on Thursday, 1-11-18 with a second cup of coffee when I saw a large wing out of the corner of my eye.  Thud.  Something landed on the roof.  Maybe it was the Barred Owl I heard at 5:00 am.  I got up to investigate.

"You won't believe this," I said to Dan. The bird was a Great Blue Heron.  It was looking down at the Bubbler pond to see if there were any fish in it.  Well, we haven't had fish in there for several years because the mink and raccoons get them too easily.  The heron didn't stay very long and flew west to the neighbors who also have a pond. The bird was there about 30 minutes.  Later, when I checked and didn't see it next door, I carefully went into the front room and peeked around the corner.  There it was, fishing in our pond, and being successful at finding a meal! 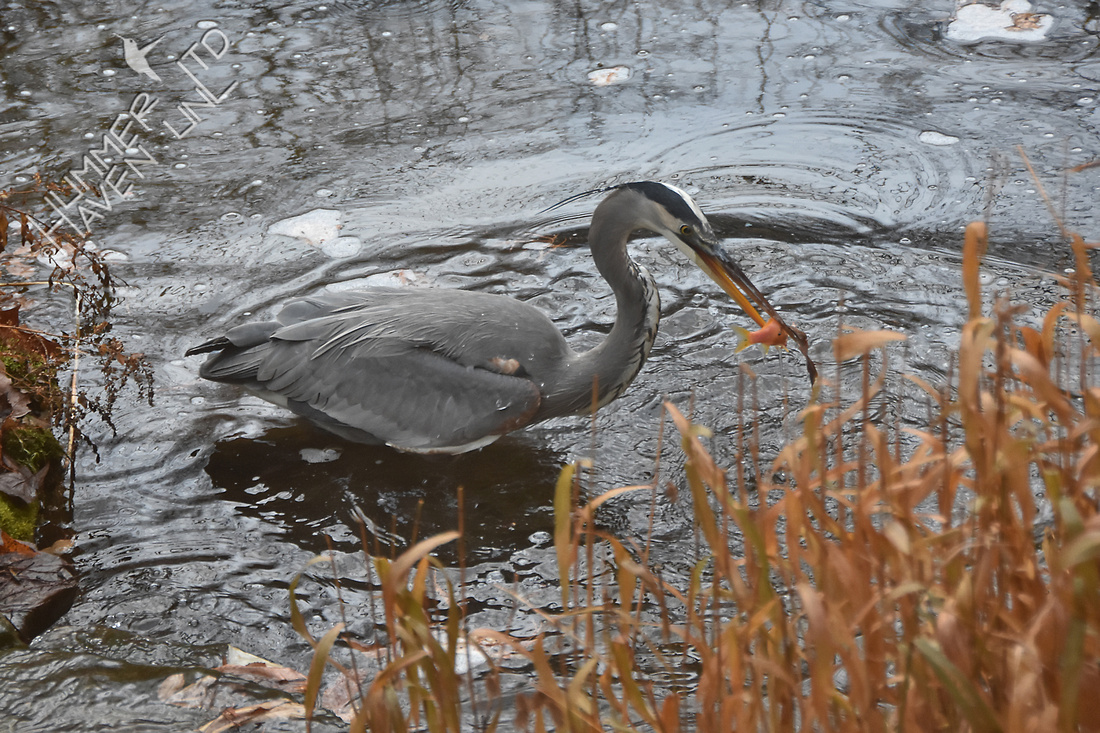 A one-gulp goldfish meal it was anyway. I watched the heron for a while and it did make a few more attempts at lunging for fish, but it seemed to have lost the element of surprise.  The fish have plenty of places to hide in the caves of the big pond. In less than 24 hours, the pond was completely iced over again.  No fishing allowed for a while! Another interesting factoid is that we have seen five different individual Yellow-bellied Sapsuckers since late December.  The first young female is scruffy-looking and this one I have seen the most often. Two more young females could be twins they look so alike, but I have seen them at the Bubbler at the same time, chasing each other between getting drinks or a bit of bark butter.  Their heads look quite black, the latter one has more black on its chest. 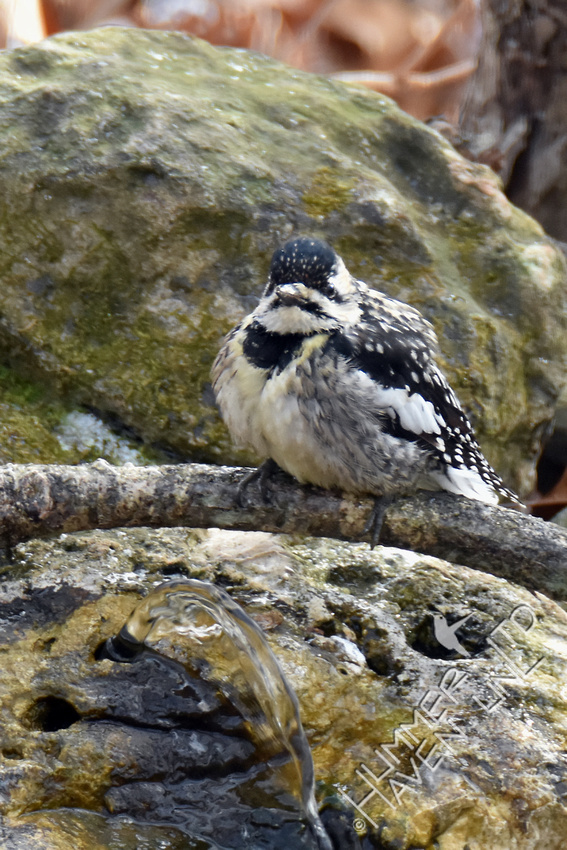 The fourth sapsucker is an adult female with red on its head and a white throat.  Here are two views of the female. And last but not least, there is this young male who is getting its red crown feathers in and has the red throat and yellow-belly. Last week on Friday, 1-12-18 it had dropped down to 13.5 degrees and birds were moving around.  There was an influx of American Robins and they all came to the Bubbler at the same time.  I believe there are 15 of the 17 birds that I saw in this photo. There have been Rusty Blackbirds coming in most days in small numbers.  They will forage, drink and then find a branch on which to puff up and rest. 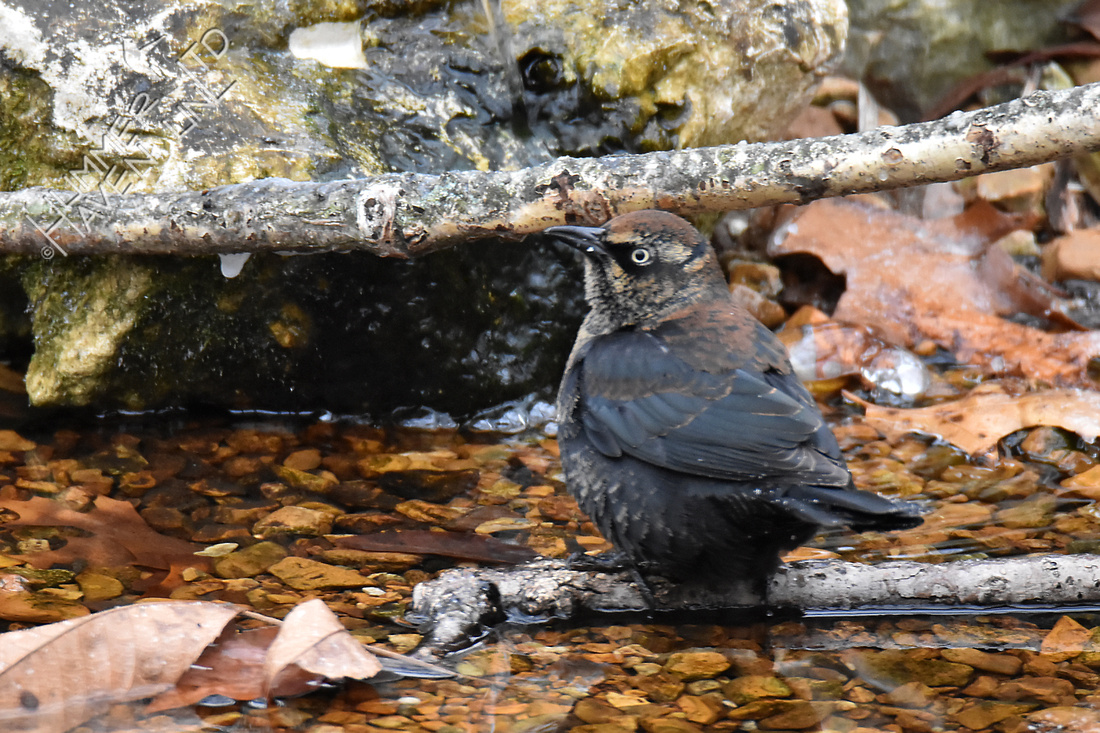 A few times I have seen two Yellow-rumped Warblers at the Bubbler together.  Perhaps they are already thinking about spring!  I know I have been! 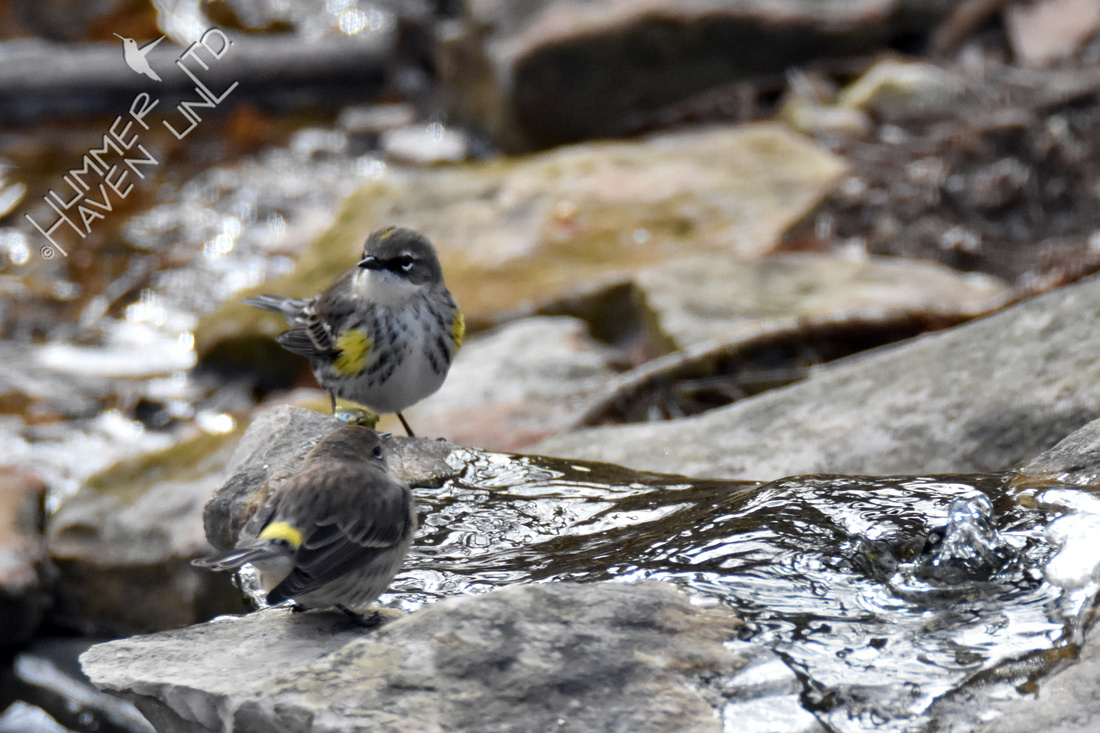 We have been working on a new exhibit called, "Warblers!" that will be up for viewing in May at Powder Valley Conservation Nature Center.  It has been fun looking at spring photos of these beauties and finalizing the choices for the exhibit.  More on that soon.  For now, we're back to enjoying our winter birds!