August 21, 2017 arrived.  It was warm, muggy and the forecast was for clouds to move in around the time of totality, 1:17-1:18:30 p.m.  We were ready with our viewing glasses and remained hopeful.  The garden was busy all morning with bumblebees, hummingbirds and butterflies visiting Marsh Milkweed (Asclepias incarnata) and the purple flower stalks of Eastern Blazingstar (Liatris scariosa).  Bumblebees were buzzing and a female Monarch laid eggs, while a Silver-spotted Skipper and Orange Sulphur nectared. 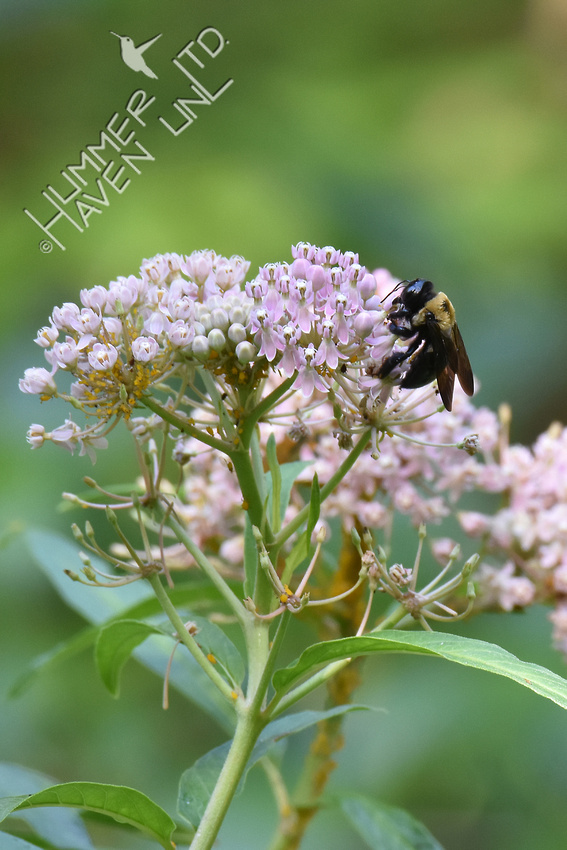 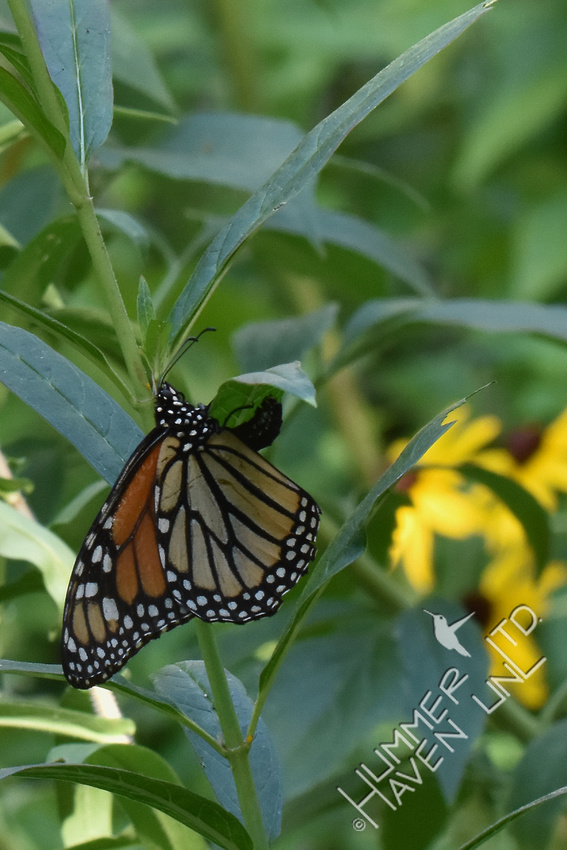 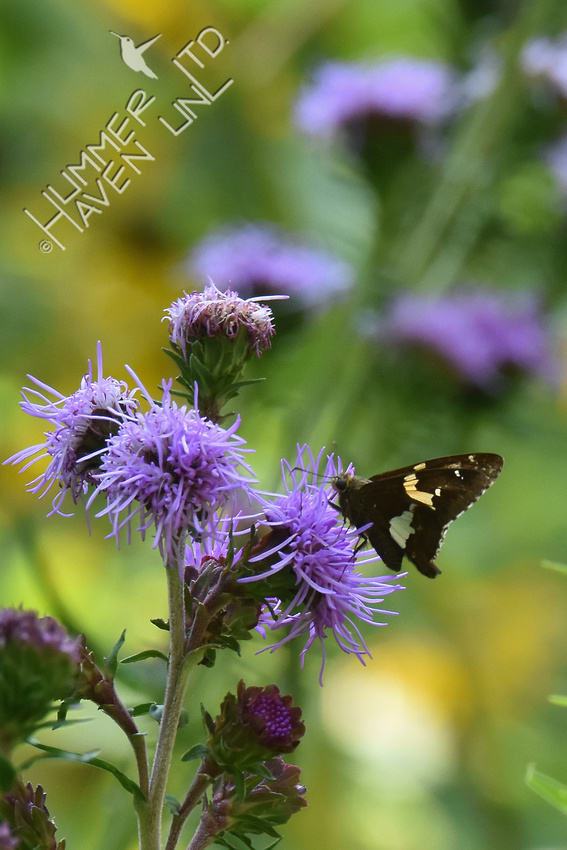 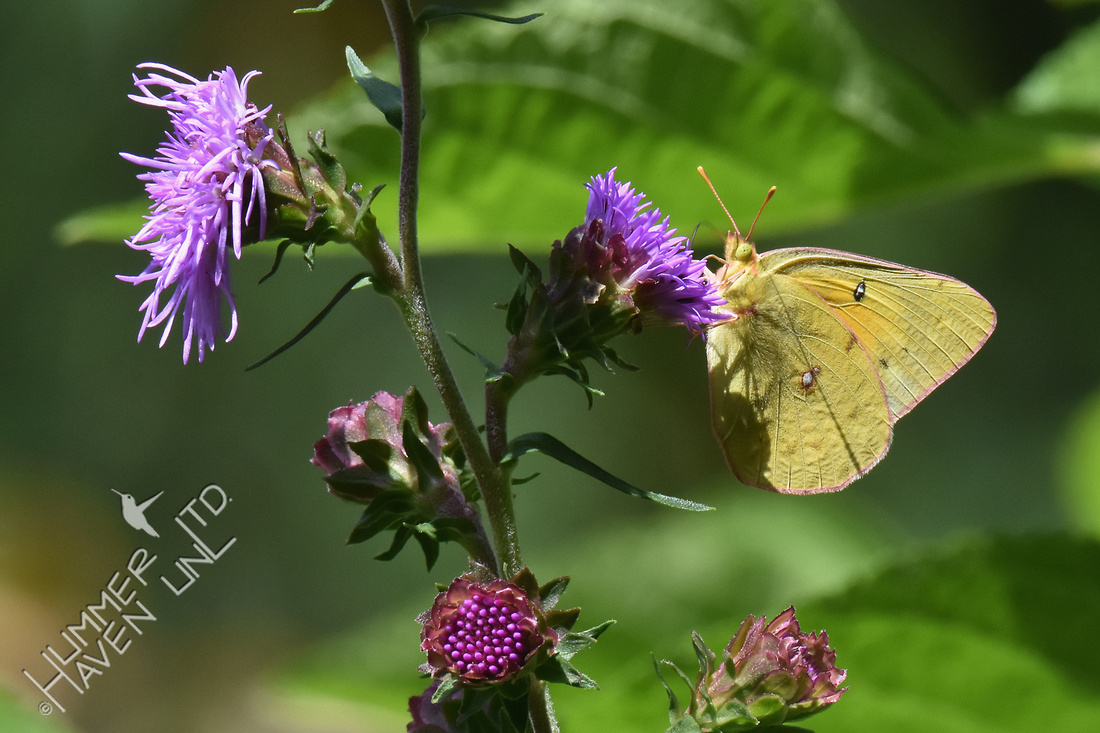 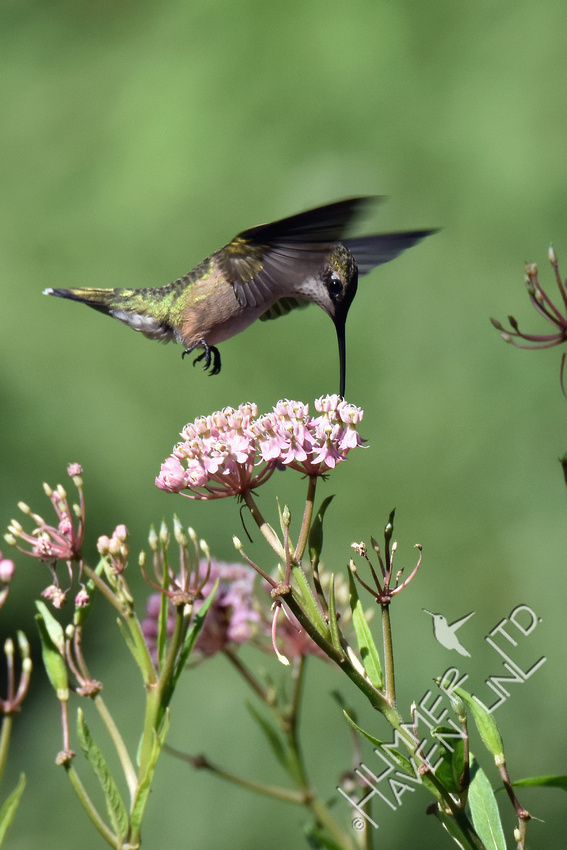 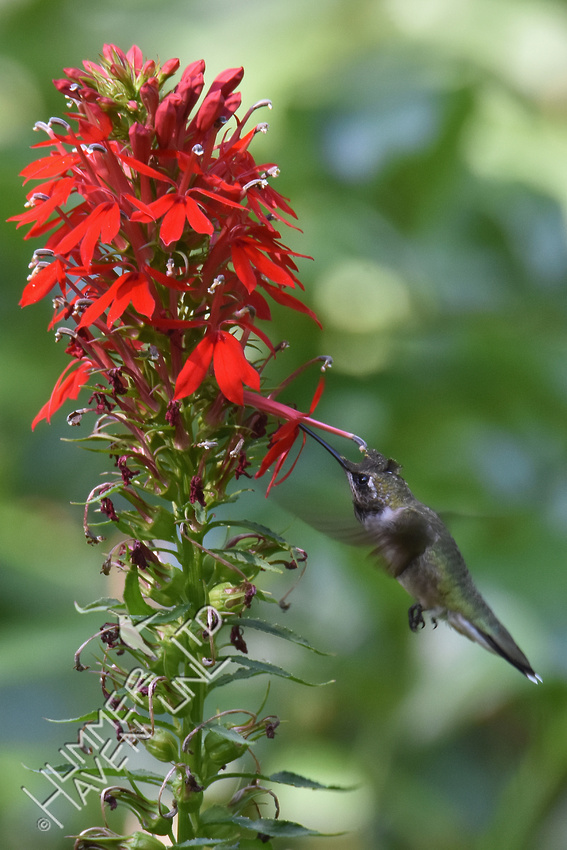 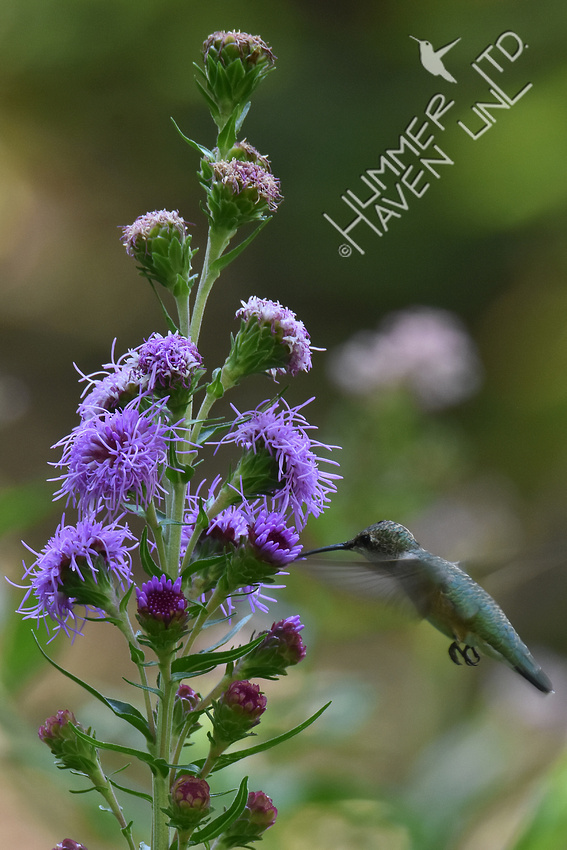 An American Goldfinch kept checking the sky.  The bird seemed to sense that something was happening. 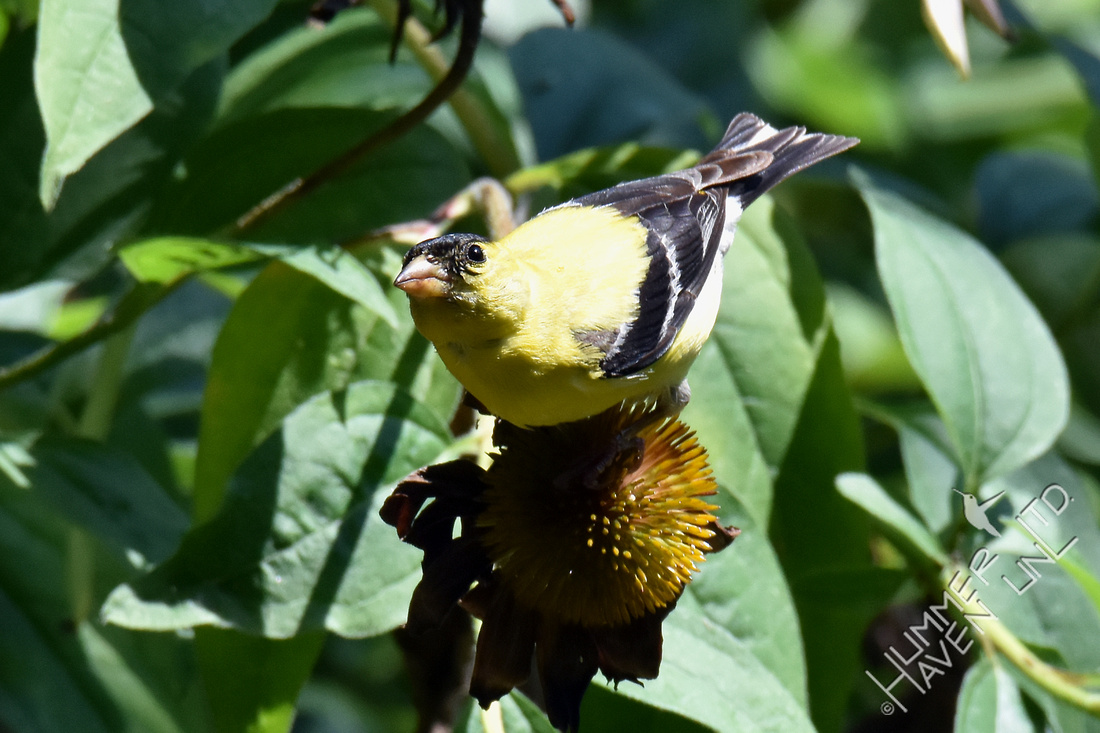 The goldfinch flew off while this Monarch was still nectaring at 1:15 pm. 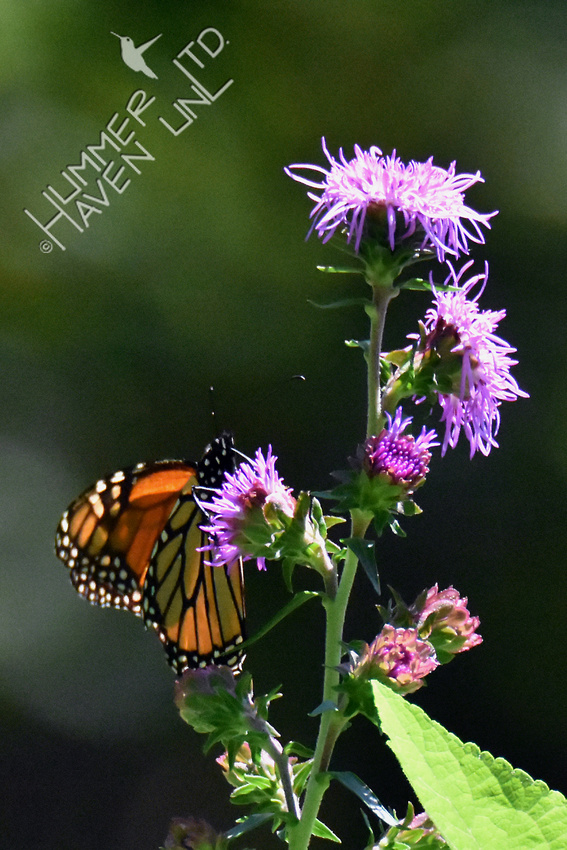 I stayed near the garden while Dan got some very different photos. 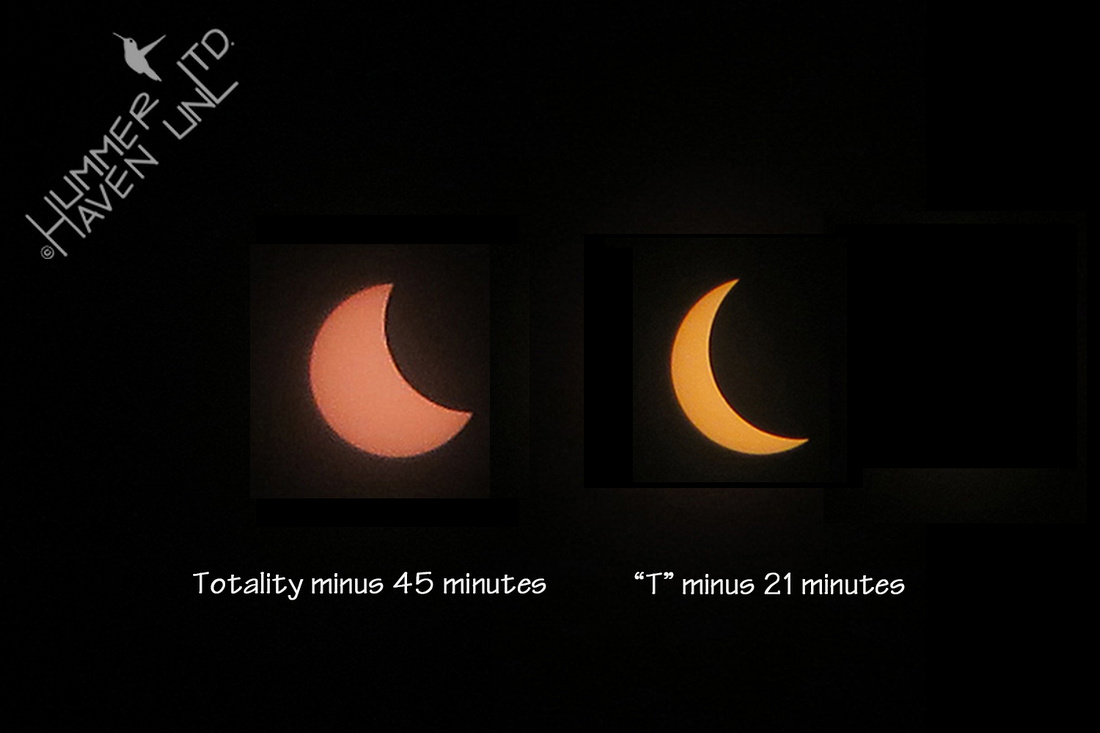 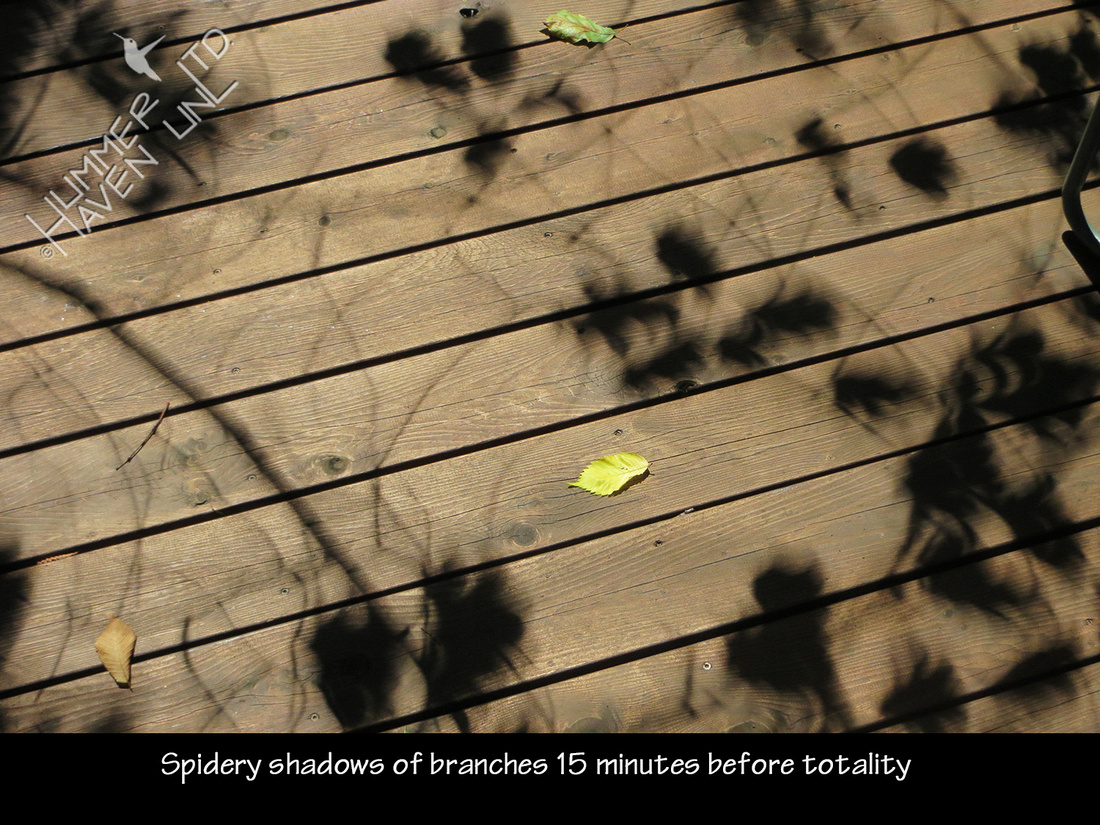 I took a video of the garden as the moon continued on its final moments toward overshadowing the sun.  The light was dwindling in a rather eerie way.

The light was gone, and it was as if time stood still.  I shivered with the slight temperature drop and went to see where Dan had set up the telescope near the driveway.  Totality! 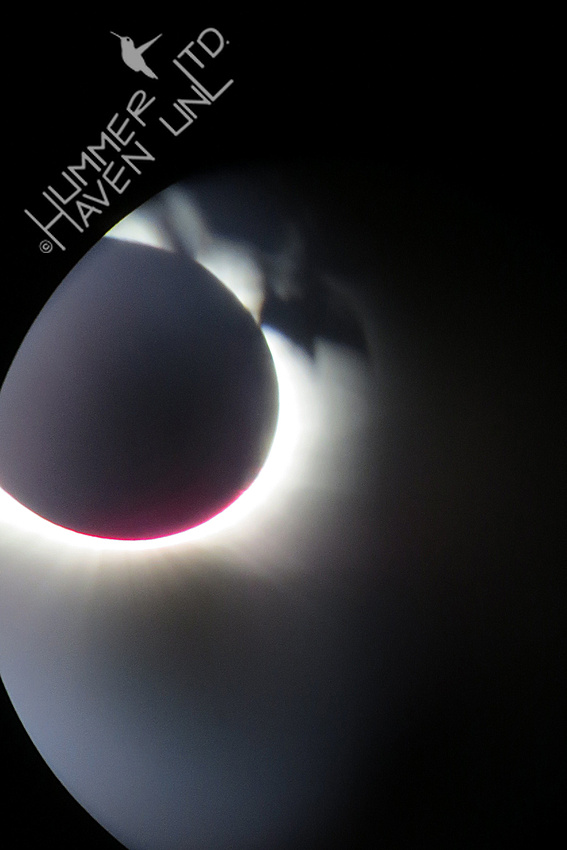 Within less than two minutes, the sun's light began to return.  Dan took this image of the shadows as they played upon the front walk. 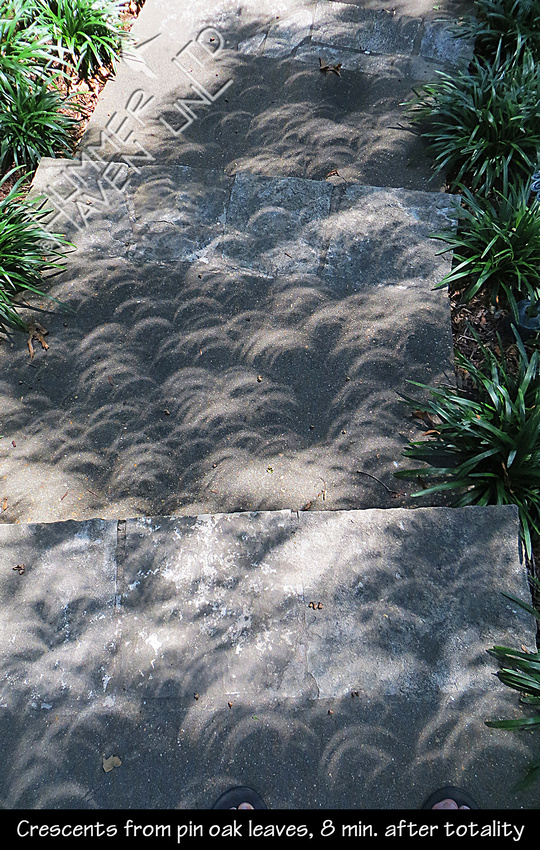 Within ten minutes, one of the hummingbirds returned to the Cardinal flower, using a tiny foot to balance. 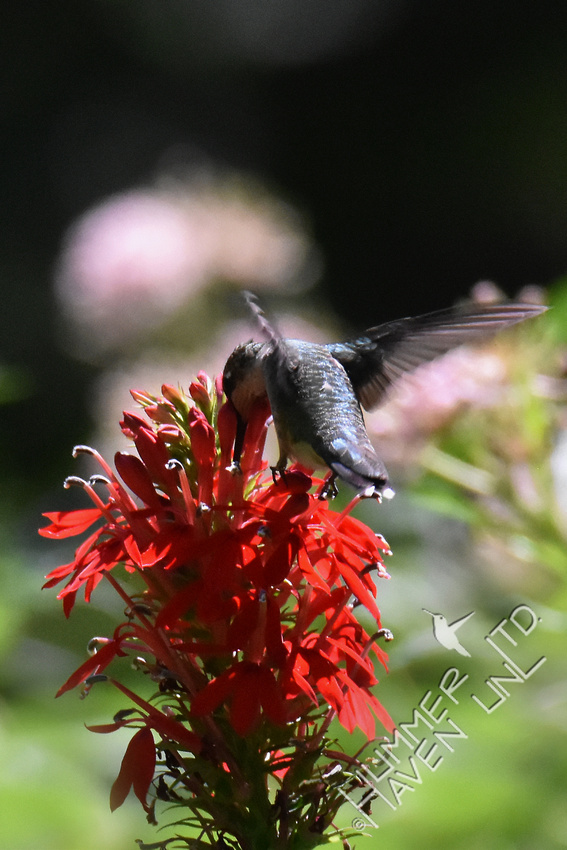 Monarchs were mating again in the Sugar Maple (Acer saccharum) by 2:44 p.m. 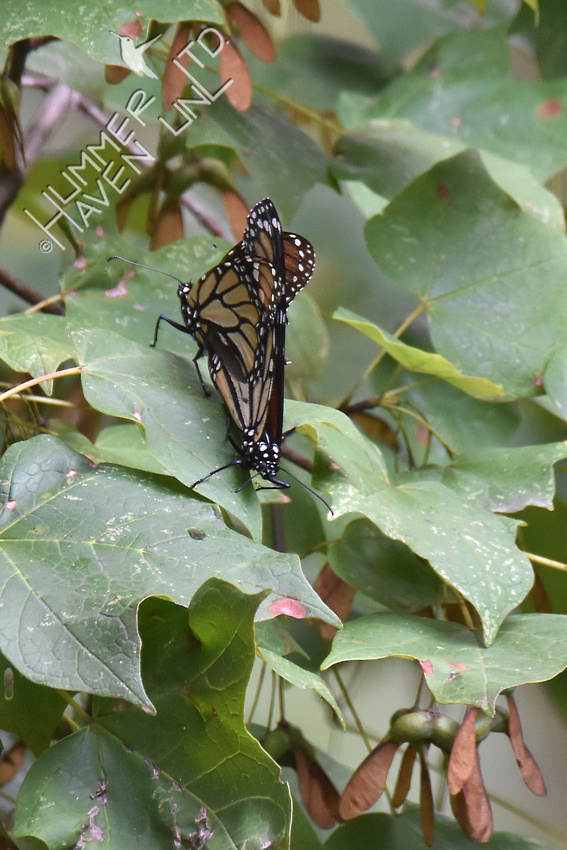 A Carolina Chickadee and Tufted Titmouse took a quick bath together at 2:57 p.m.  Everything seemed to be returning to the normal pace of activity.  The solar event was complete. 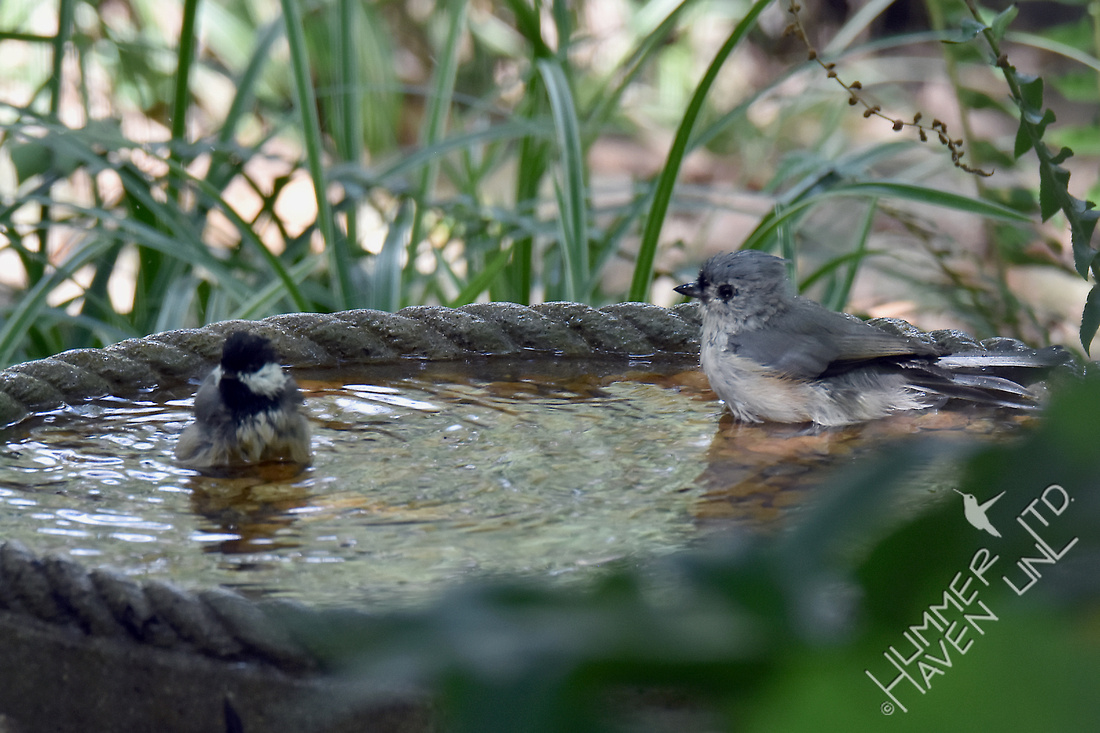 On Wednesday, 8-23-17 the first warblers arrived with a cool front overnight.  There were Black and White Warblers, American Redstarts and this female Chestnut-sided Warbler.  It was the only one to come to the Bubbler and it was soon joined by a female American Goldfinch. 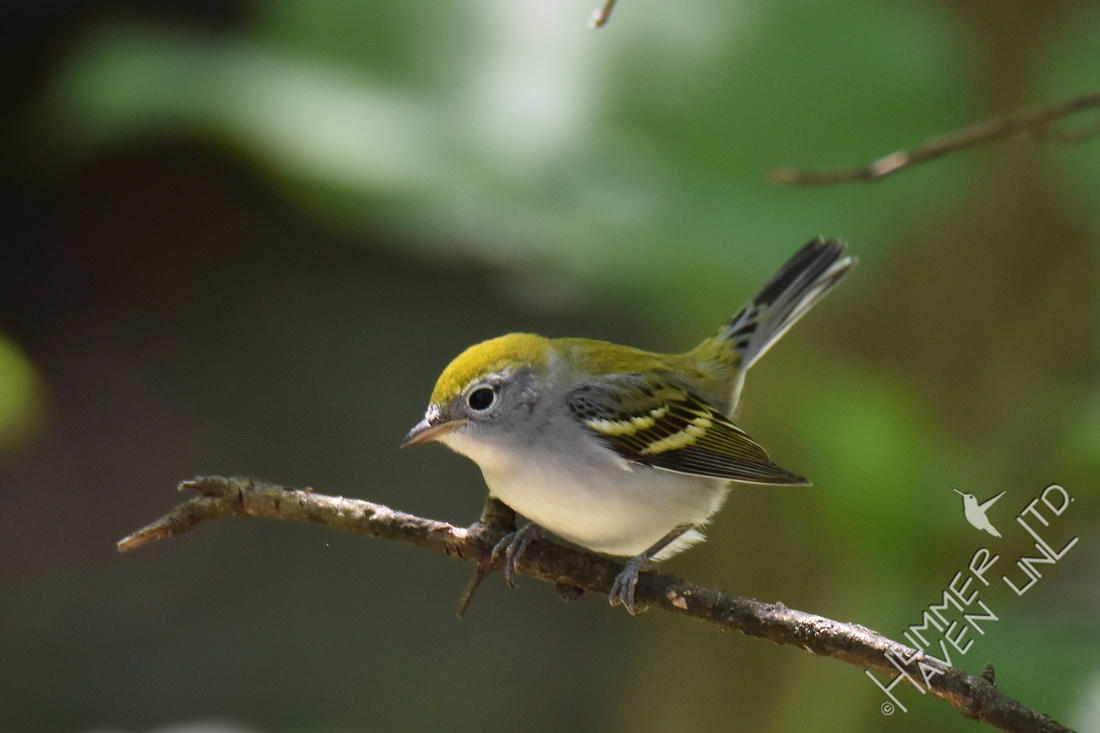 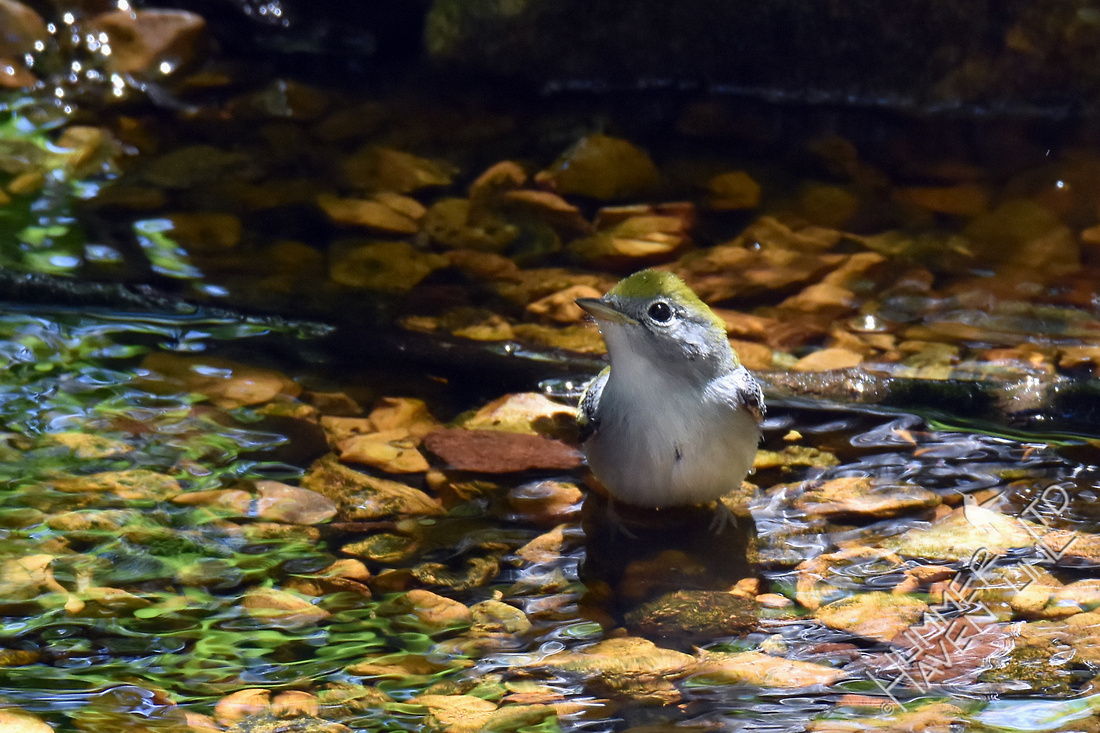 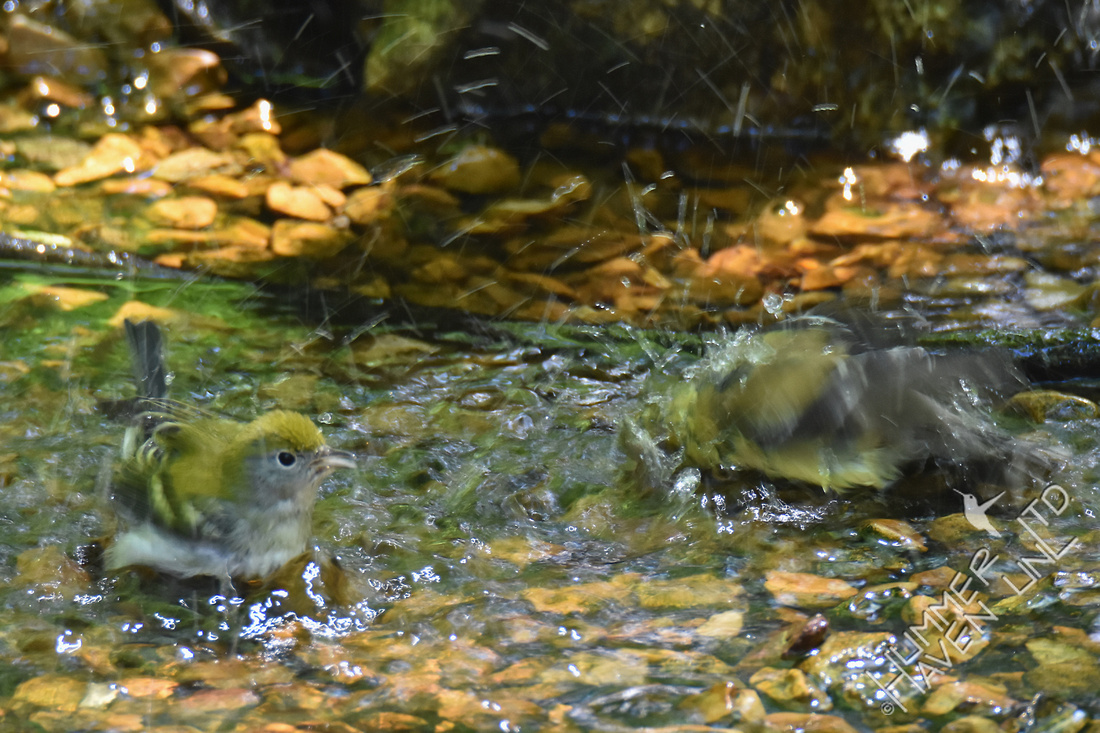 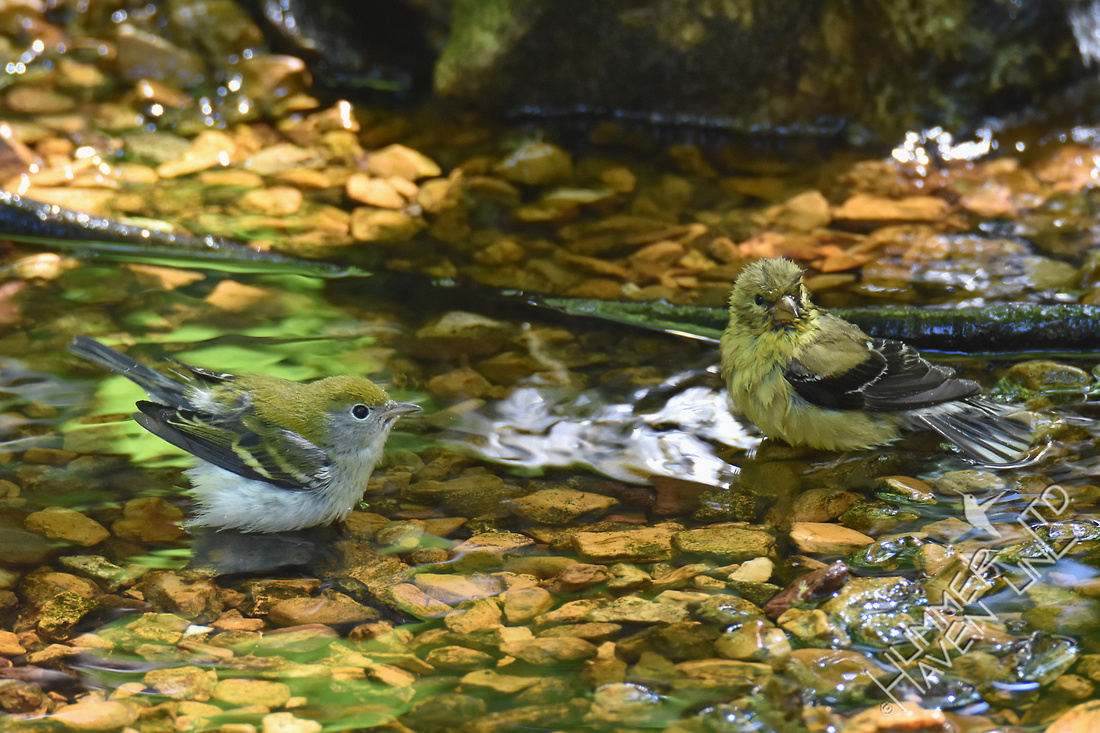 The next morning before 7:00 a.m. a real ruckus was being made by half a dozen American Crows who were soon joined by a Cooper's Hawk, Blue Jays, Northern Cardinals and a Carolina Wren.  The crows were LOUDLY protesting an invading predator.

I had to get closer to see it and it meant shooting nearly straight up to get a photo.  A Great Horned Owl peered back at me, species #97 for the year.  The bird finally had enough of the squawking and took off to the south before I could try again.  We've been hearing both Barred Owls again in the evenings.  I wonder which species will take command of the territory.  We have had both species nest and produce young in different years in our neighborhood. 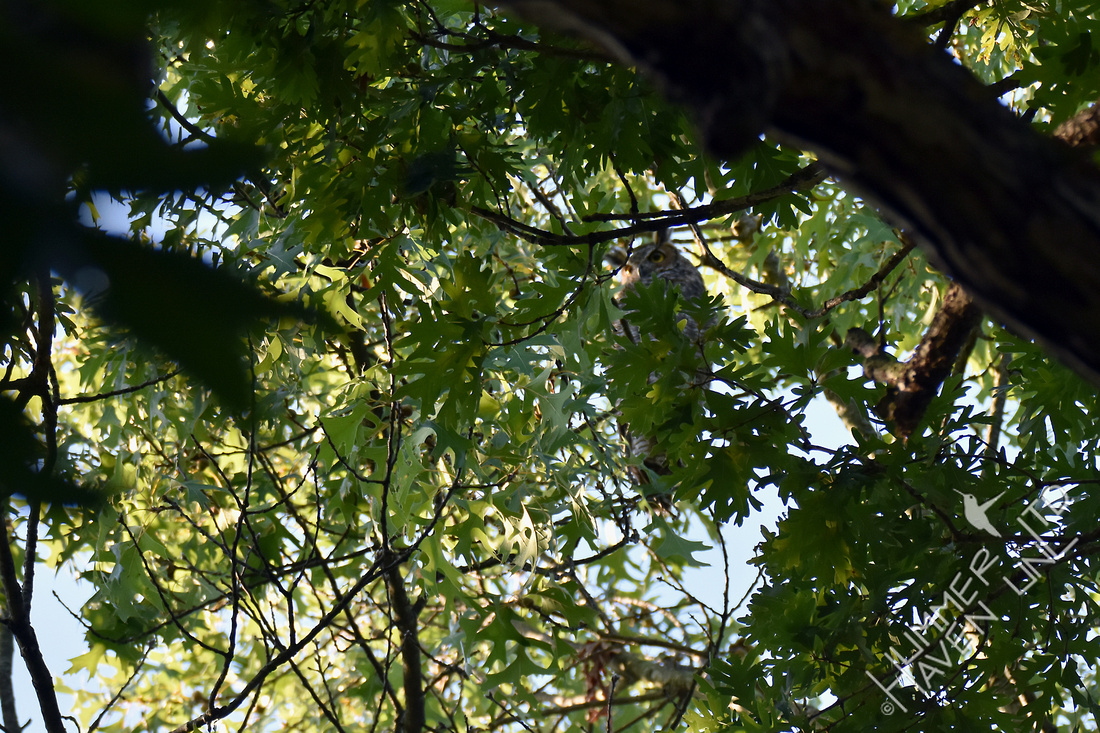 The last time I had been able to photograph a Great Horned was nearly four years ago on 12-28-13 as it was harassed by a crow in the pine tree next door. 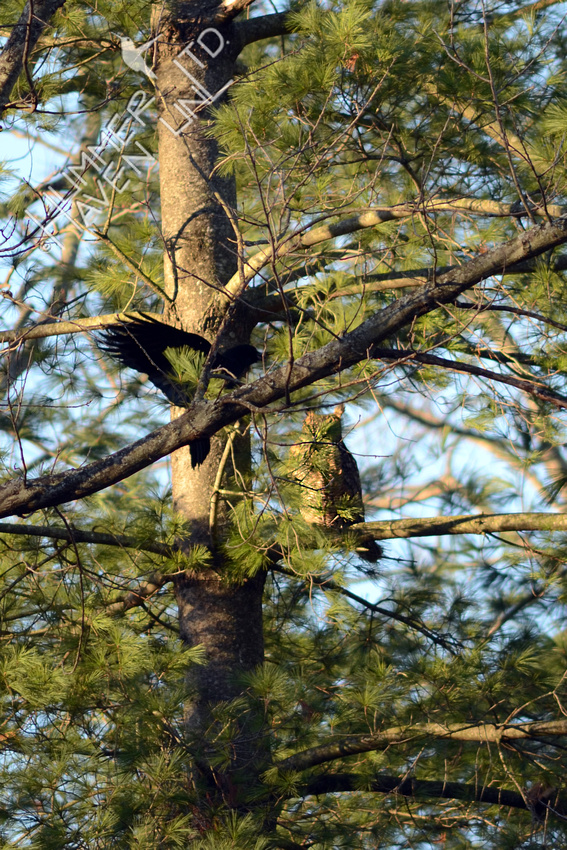 Today, I was visiting with friends until about 2:30 when I went to see what was up in the garden.  I found two Monarch caterpillars and when I took Dan down later to show him, I found a third.  They are not always easy to see!  These three were different sizes, and all in the same little patch by the pond. 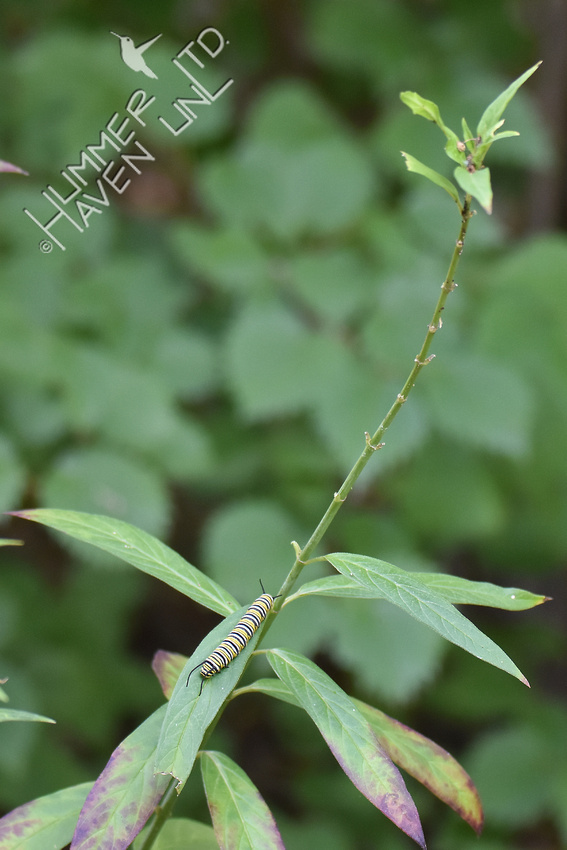 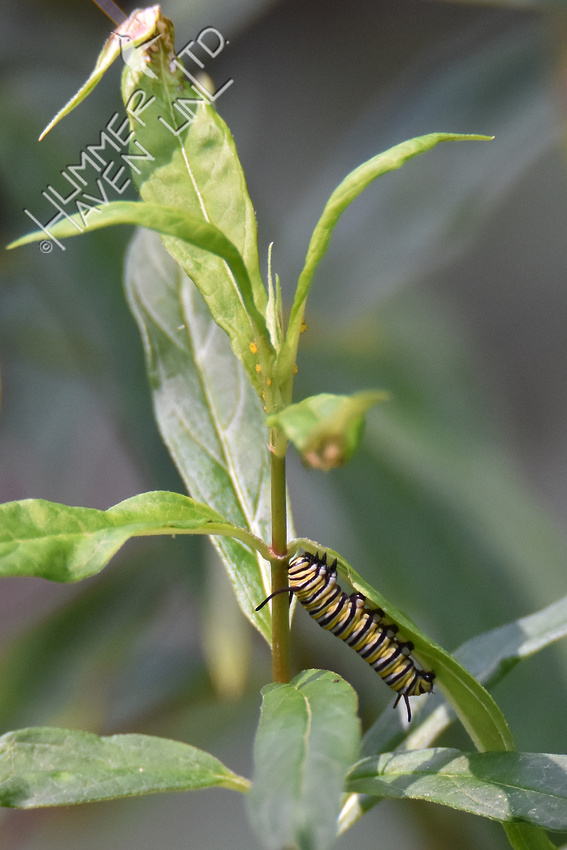 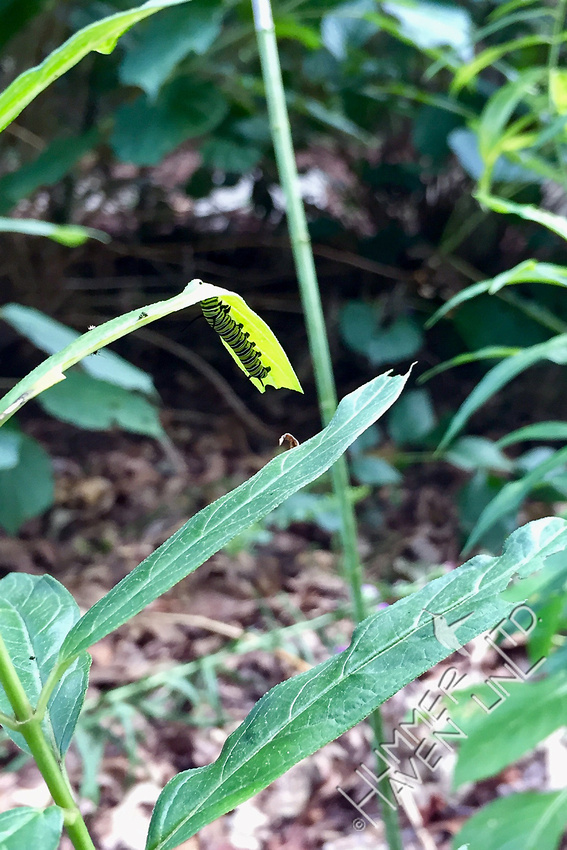 For the second day in a row, I've had two female Monarchs in the garden. 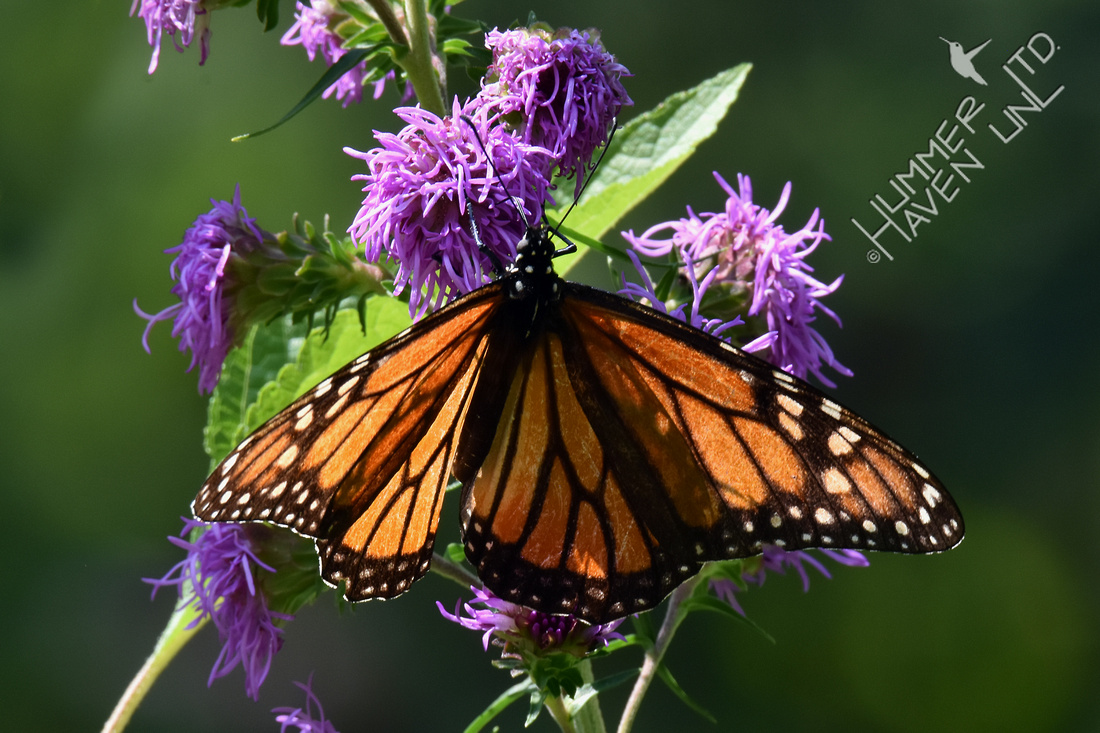 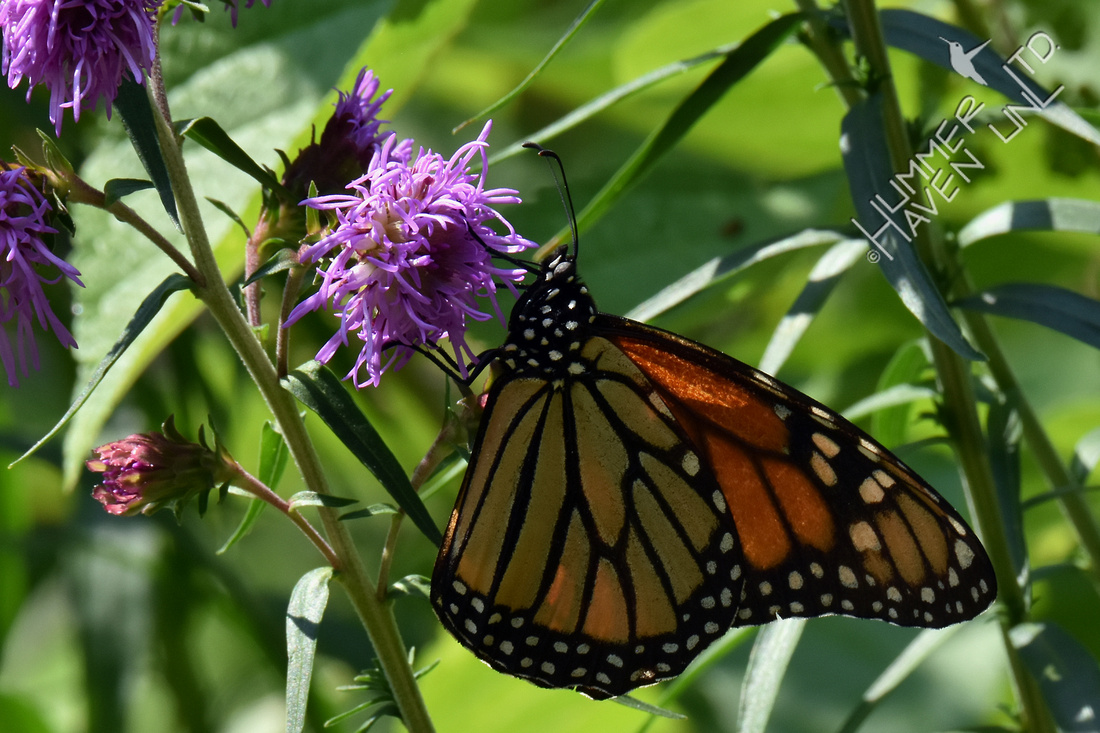 I also saw two male Blue-faced Meadowhawks and this one was perched low on a Wafer Ash (Ptelea trifoliata). 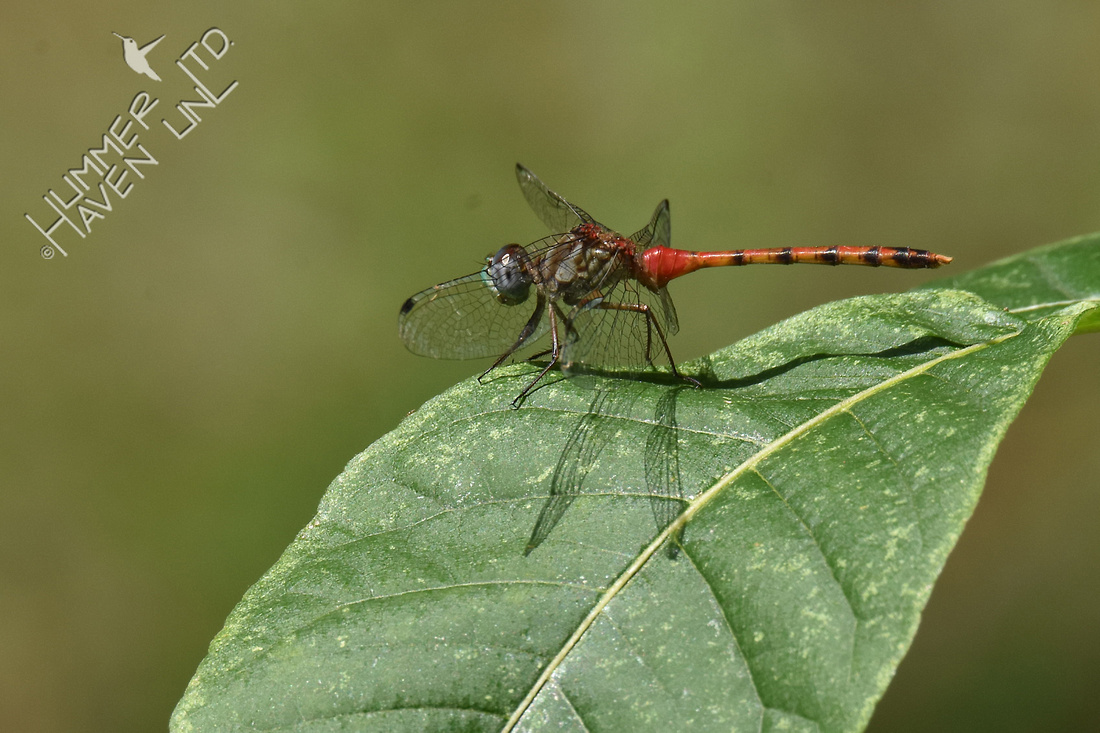 Well, August is nearly done - what's going on in your garden?