Discovering a Monarch predator in the garden

On Friday morning, I was checking the marsh milkweed with my binoculars and finally saw a large Monarch caterpillar!  I found 11 in the patch by the pond, both large and small.  Elation!! 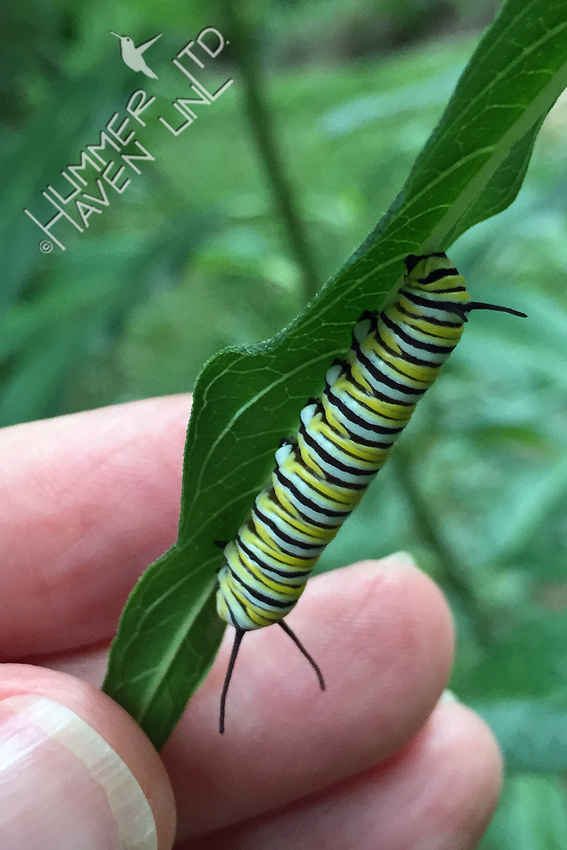 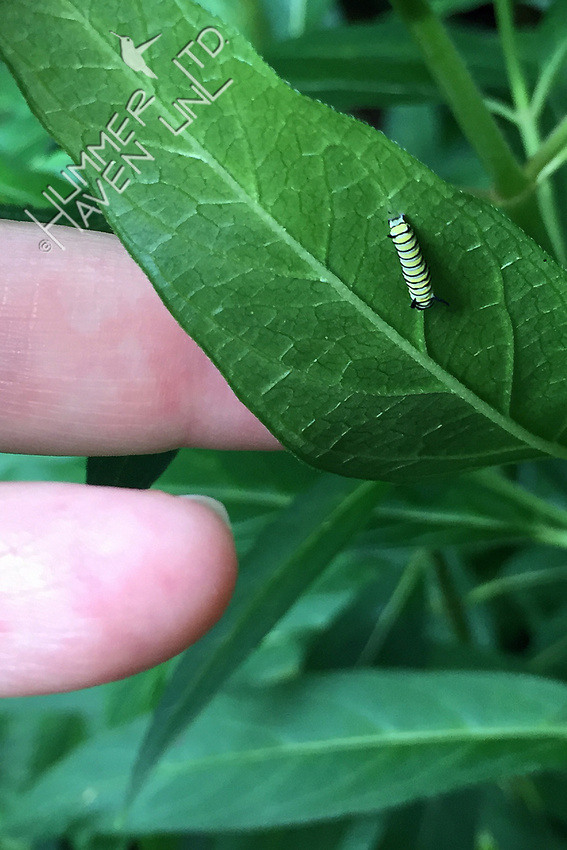 The 12th was another large one, and it was crawling off to find a place to pupate in the garden.  I left to have lunch with my friend, Lynne, so happy to finally have seen some caterpillars. 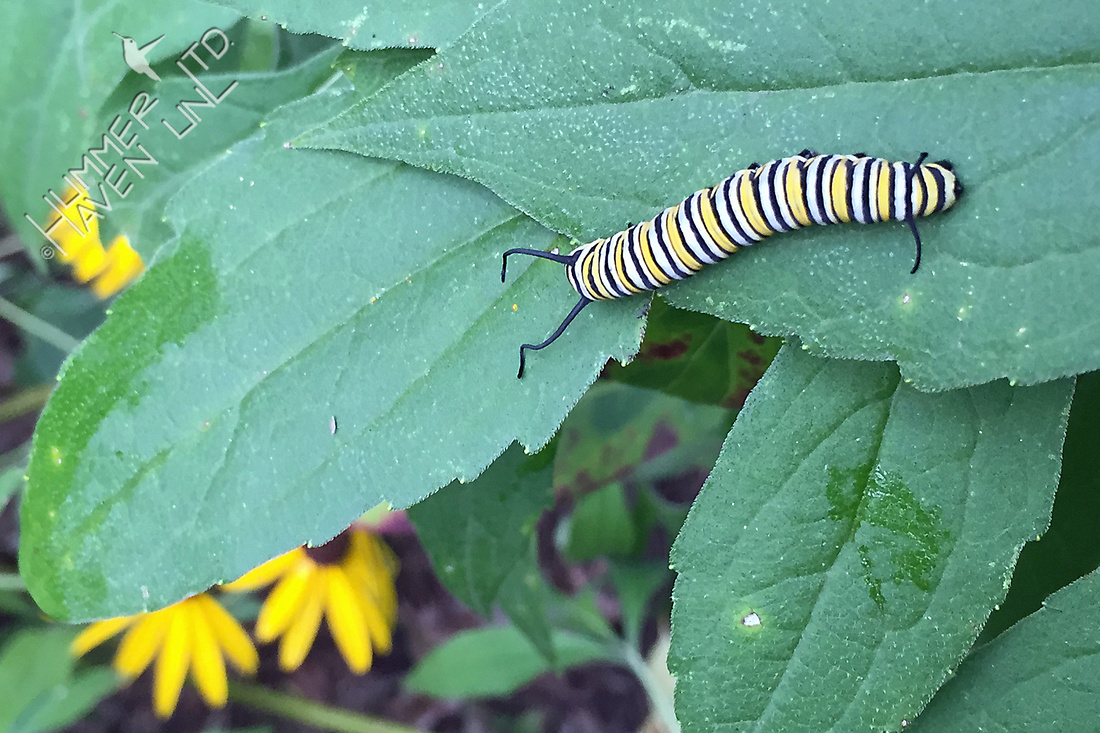 On my return, I went back outside again to photograph for awhile.  The butterflies were very active and I confirmed that there were four adults. 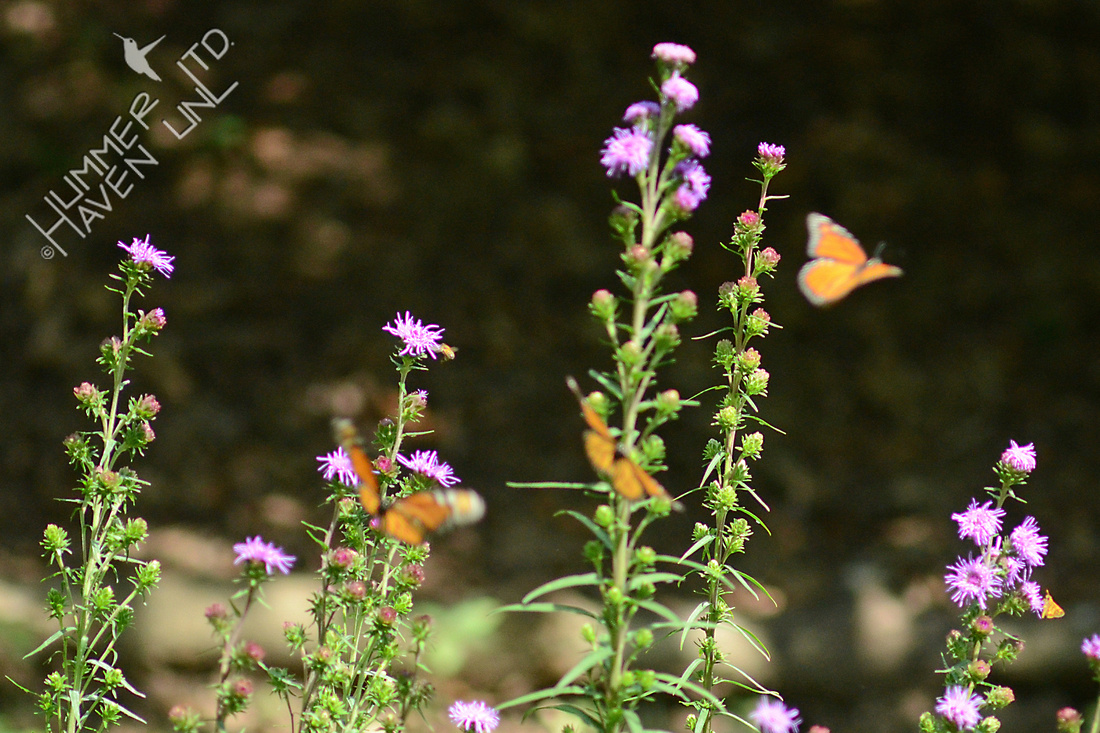 The males were really exhibiting some territorial behavior.  "My patch!" They were constantly upending each other. 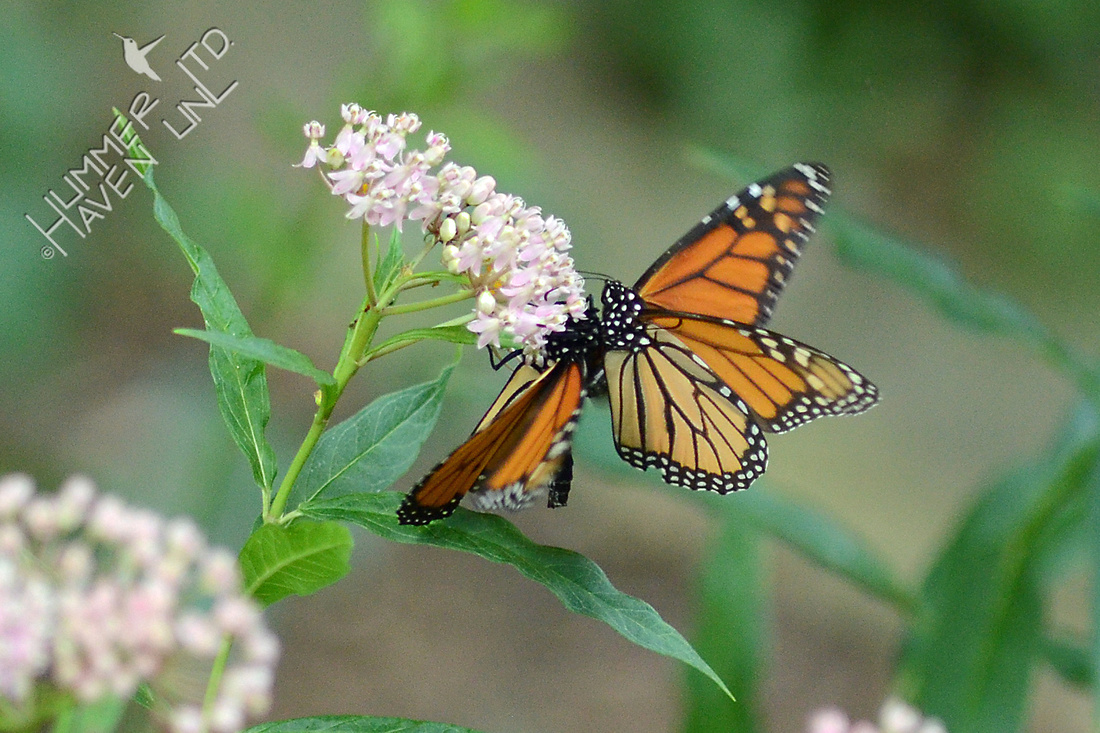 Then, something unexpected happened.  A bird was shaking one of the marsh milkweed plants.  It was a male Northern Cardinal.  He did it again, which dislodged a couple of the smallest caterpillars from the undersides of the leaves.  The bird quickly scooped them up and devoured them.  Despair!! 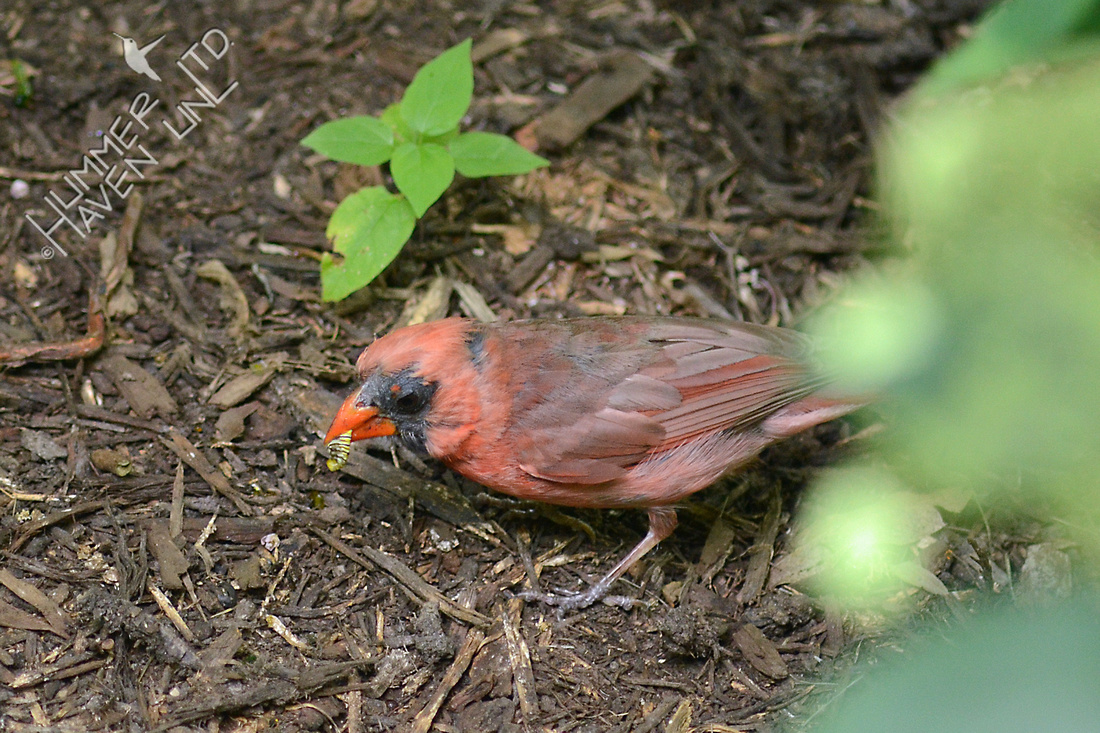 I have read that adult butterflies are lost to birds in the wintering grounds, but apparently, not much is known about what birds might eat the larvae.  My friend, Chris, told me that very evening that she had also seen a Cardinal take a large Monarch caterpillar.  Anyone else?  Please comment. 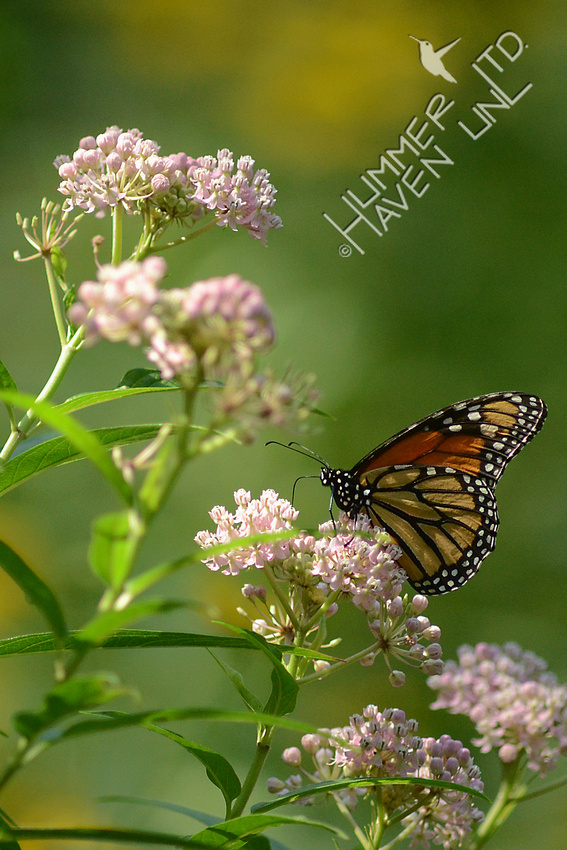 At least one female was laying eggs.  She was very quick and this was the best photo I managed to get. 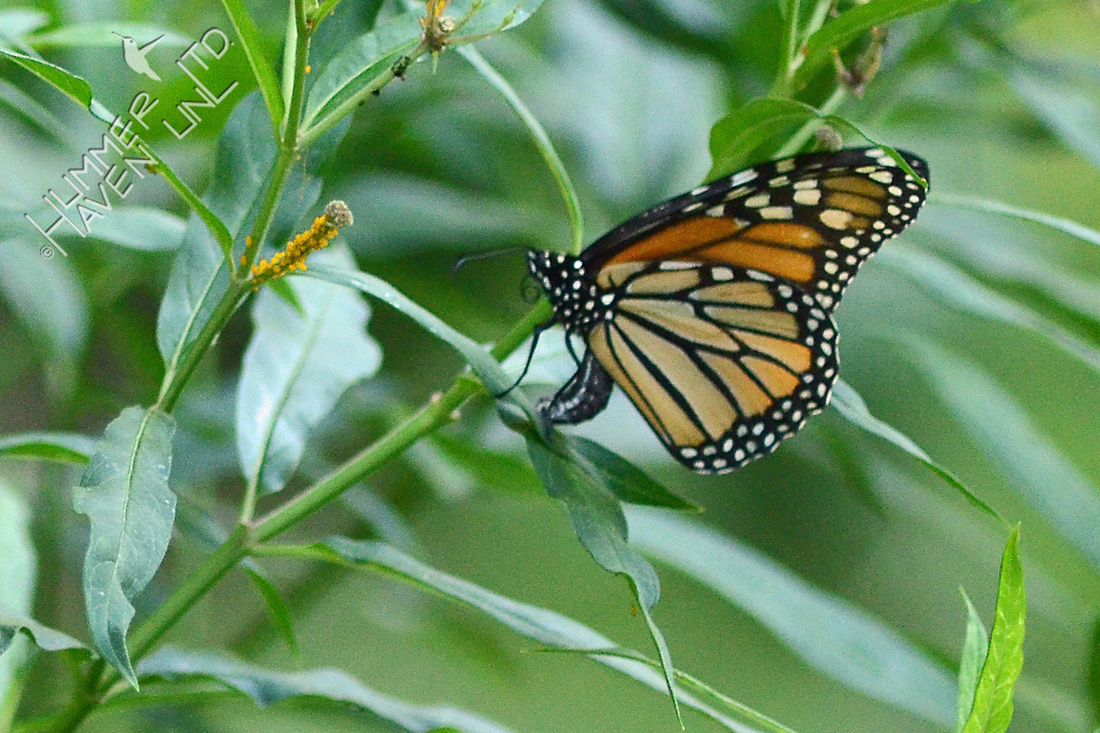 The Blue Sage began to open today and a Silver-spotted Skipper found it right away. 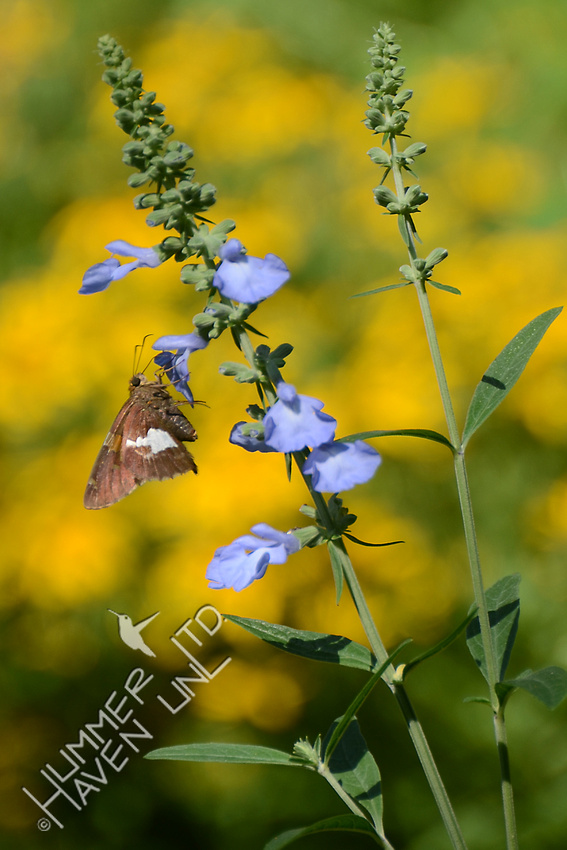 The young hummingbirds have been very active, too.  It's good to have some sunny summer days. 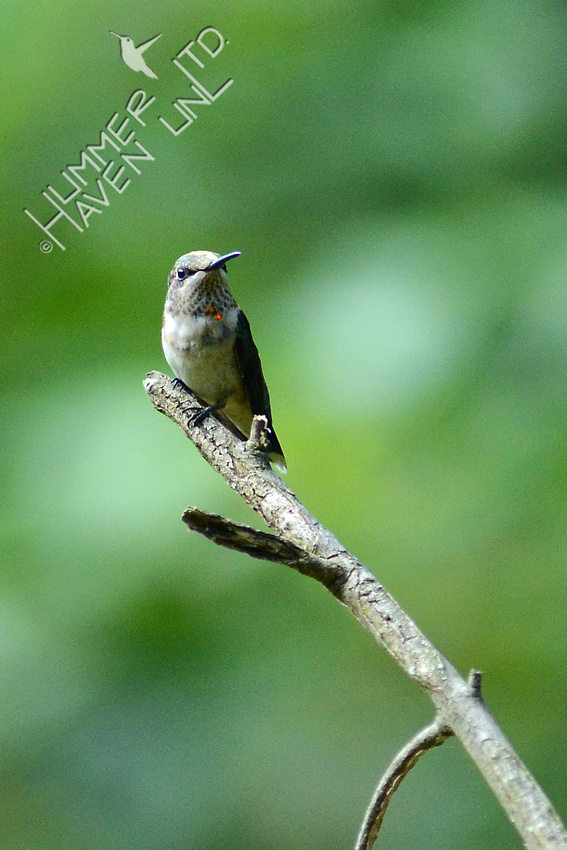 Nancy Cross(non-registered)
Your pics are wonderful! I love your documentation. I have a wildlife garden which is small but brimming with flora and fauna. I have seen cardinal with a large Monarch caterpillar in her beak. It was at that time I decided to take the caterpillars and raise them in a mesh tent outdoors. It’s been really successful! I thank you for you beautiful pics and documentation.
Hummer Haven UnLtd.
Thank you, Rachel. It takes a lot of patience and time out there to get a few good ones. It makes me happy that our garden is supporting life!
Rachel(non-registered)
Beautiful shots! I love how carefully you're documenting everything you observe.
Hummer Haven UnLtd.
Alan and Kathy, I have more questions than answers! I have shown the photo of the Cardinal to several others and they have not seen this before, either. Obviously, this is part of the reason that there isn't data on this. Kathy, congratulations on raising so many! I've done that in the past, and may try again. It's good that we're seeing more this year. There are so many obstacles for them.
Alan @ It's Not Work, It's Gardening!(non-registered)
I haven't seen any caterpillars yet, only a female appearing to lay eggs but only going through the motions (I carefully checked the leaves she visited and saw no eggs). Since there are some leaf holes, I wonder if I've had young caterpillars but they've been eaten?
No comments posted.
Loading...
Subscribe
RSS
Recent Posts
Spring! 4-4-21 Spring approaches! 3-10-21 "Rara avis" on 2-21-21 It's February! 2-16-21 1-25-21 Third week of January Mid-January update, 1-17-21 And so it begins, 2021 2020...It's a wrap! Mid-December sightings 12-18-20 Into December! 12-8-20
Keywords
bubbler pond rusty blackbird mink fox Tanager bluebird basin warblers Purple Finch
Archive
January February March April May June July August September October November December
© Hummer Haven UnLtd.
Powered by ZENFOLIO User Agreement
Cancel
Continue