We'll start with Thursday, 2-13-20. That was the day the temperature started to plummet. For a brief period, the birds seemed hyperactive as they realized what was happening. They would need some extra calories to get through a very cold night.

The Red-bellied Woodpecker came to check out the bark butter while a Brown Creeper was on the same small oak. 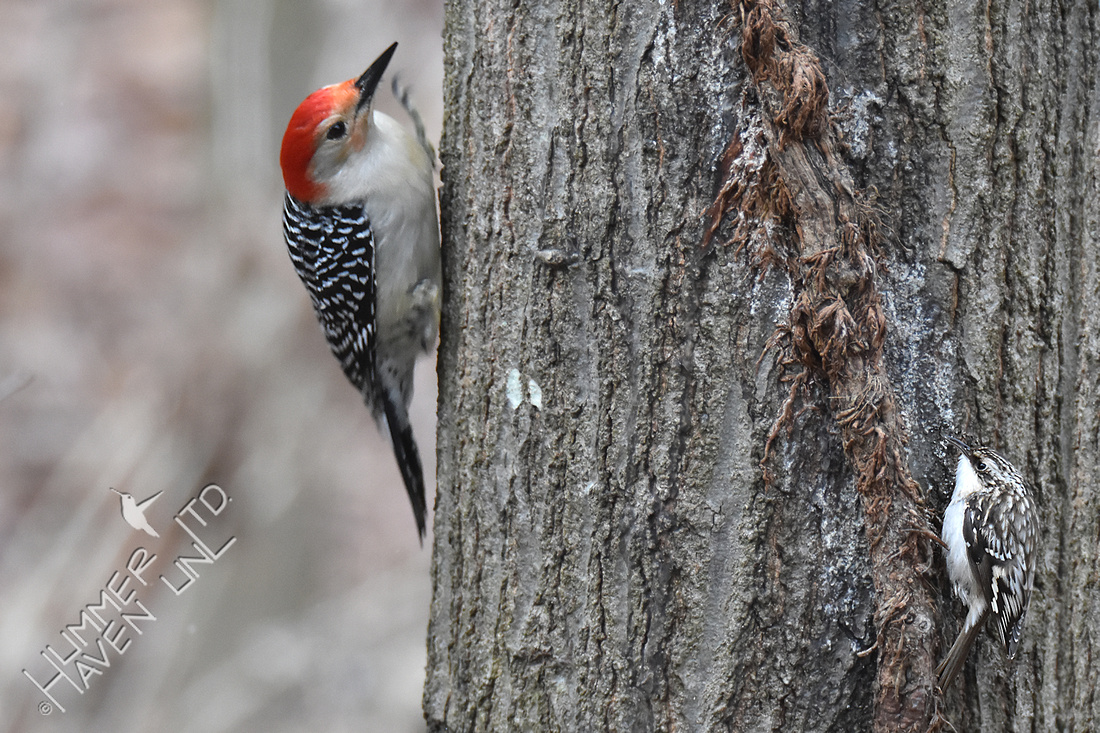 A few minutes later on the same tree, the female Yellow-bellied Sapsucker was surprised by a Northern Flicker. 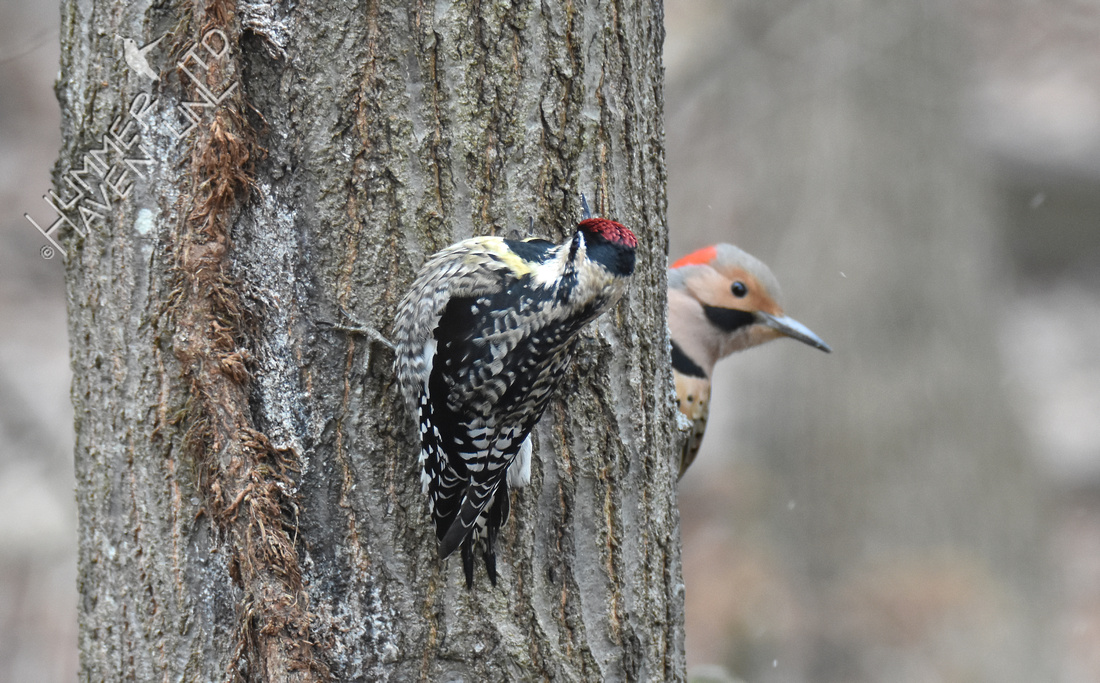 The Red-bellied Woodpecker came back, circling the tree in a dance with the sapsucker. Looked like the sapsucker held on for the goods. 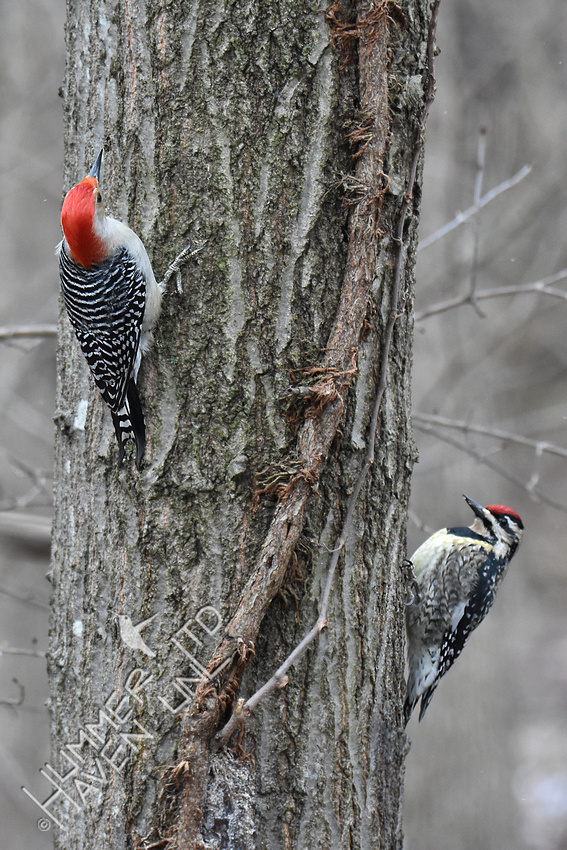 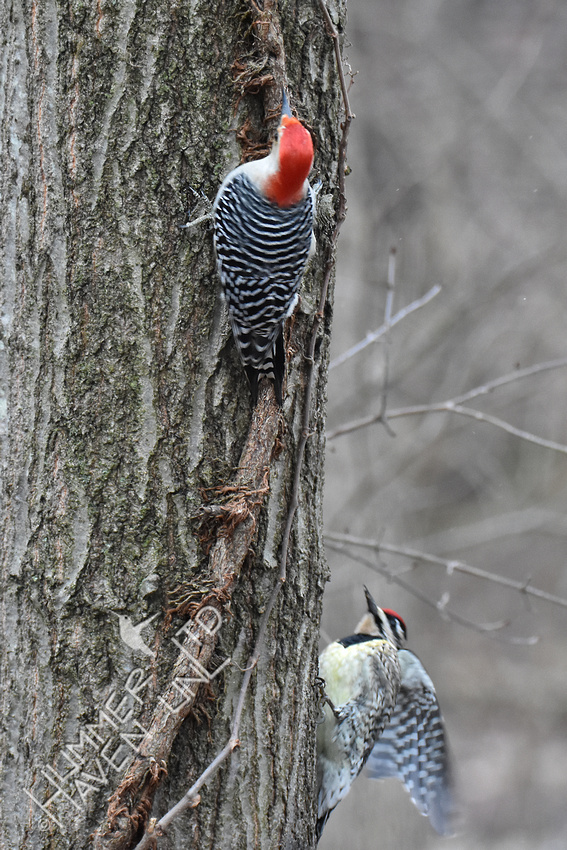 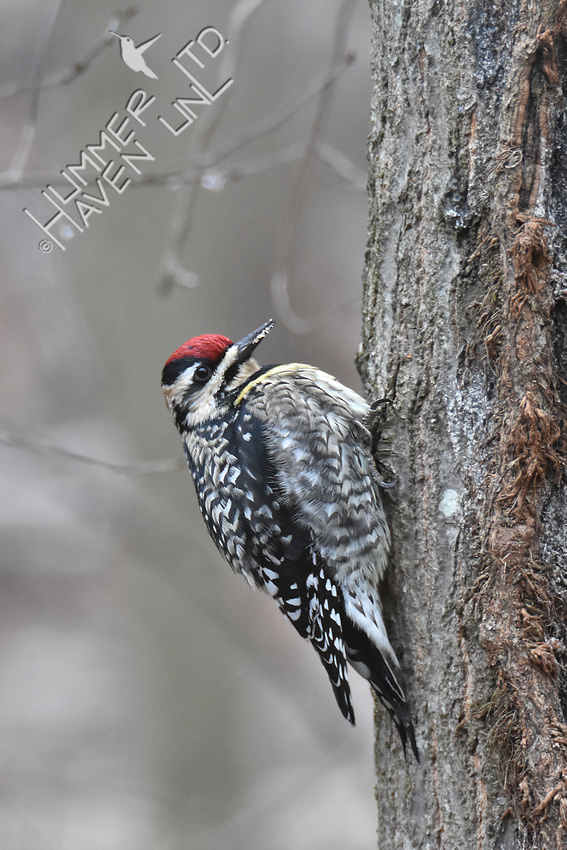 The heater in the bubbler had failed on Thursday, 2-13, and Dan decided to wait out the short frigid spell and test the ability of the bubbler pump to keep percolating. He had faith in the warmth of the ground temperature to keep the whole system from freezing. On the morning of Friday, 2-14, the thermometer read 5.2 degrees and this is what it looked like. Icy! But, still flowing! 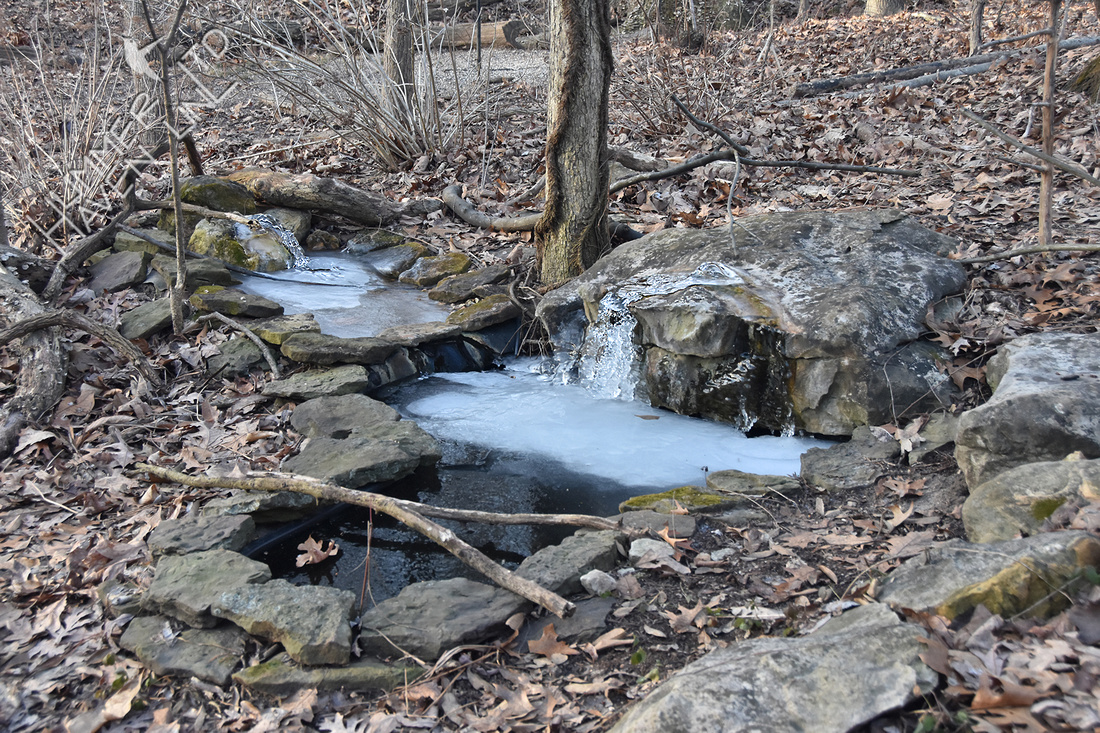 The GBBC (Great Backyard Bird Count) had begun! We had 19 species on Friday including American Goldfinches, the immature Yellow-bellied Sapsucker and at least 2 Brown Creepers. 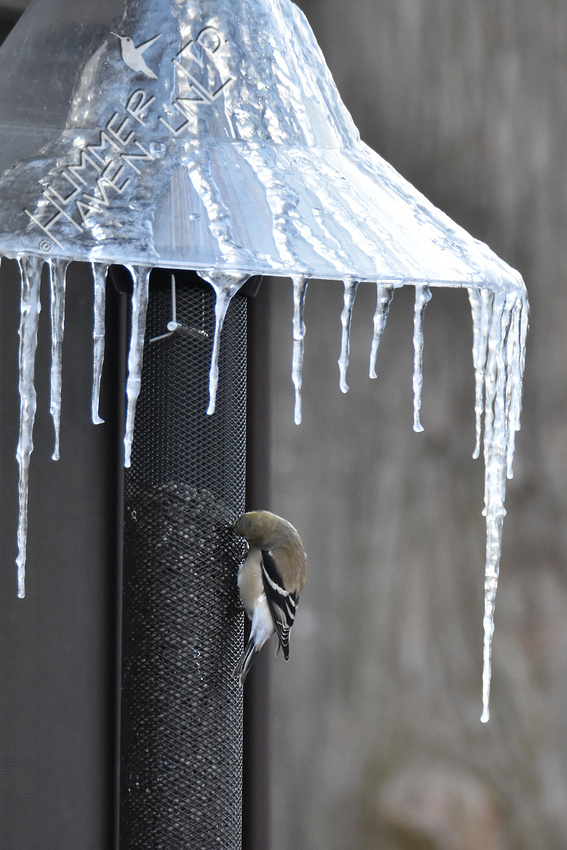 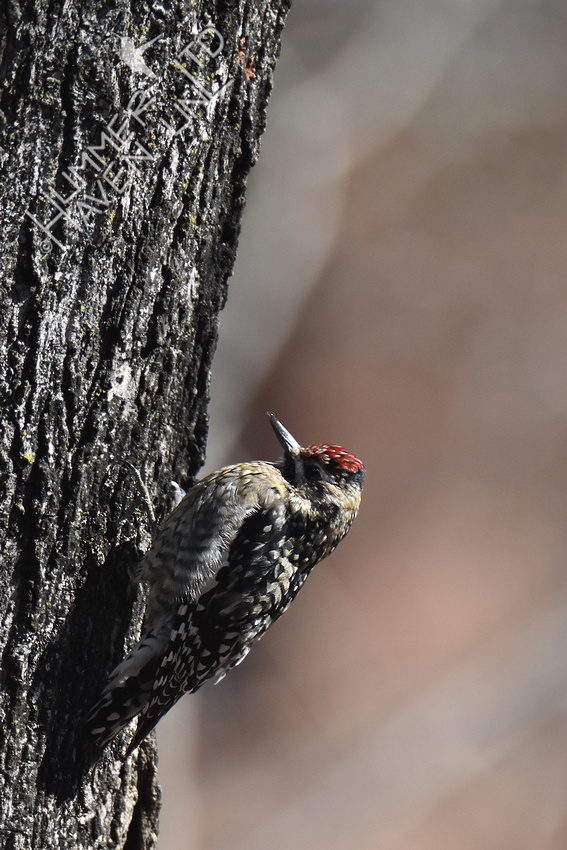 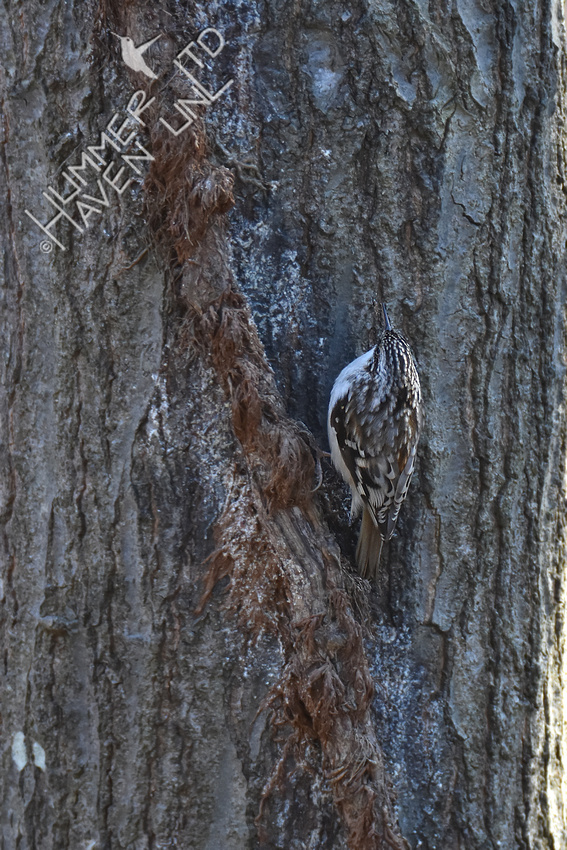 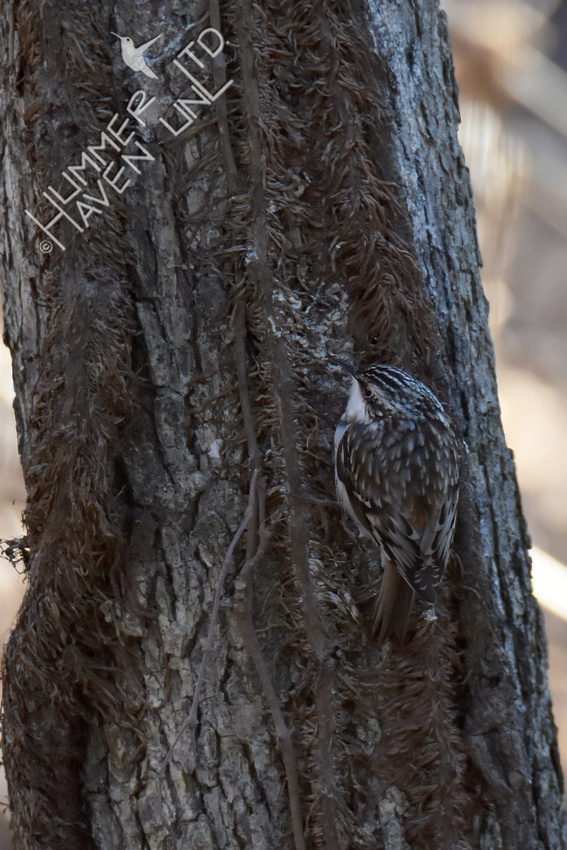 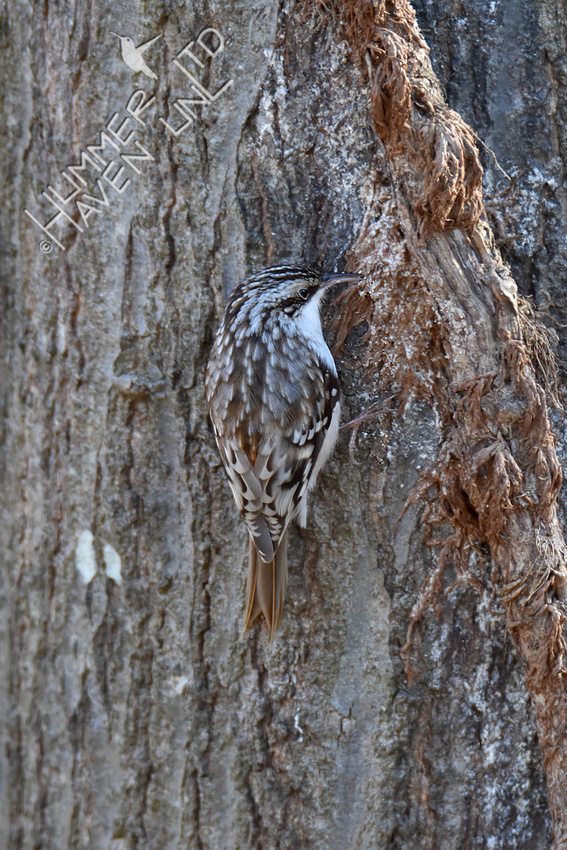 Late in the afternoon, a flock of robins came in, numbering 13 or more. I counted 11 when I took this photo. It's an eye test! 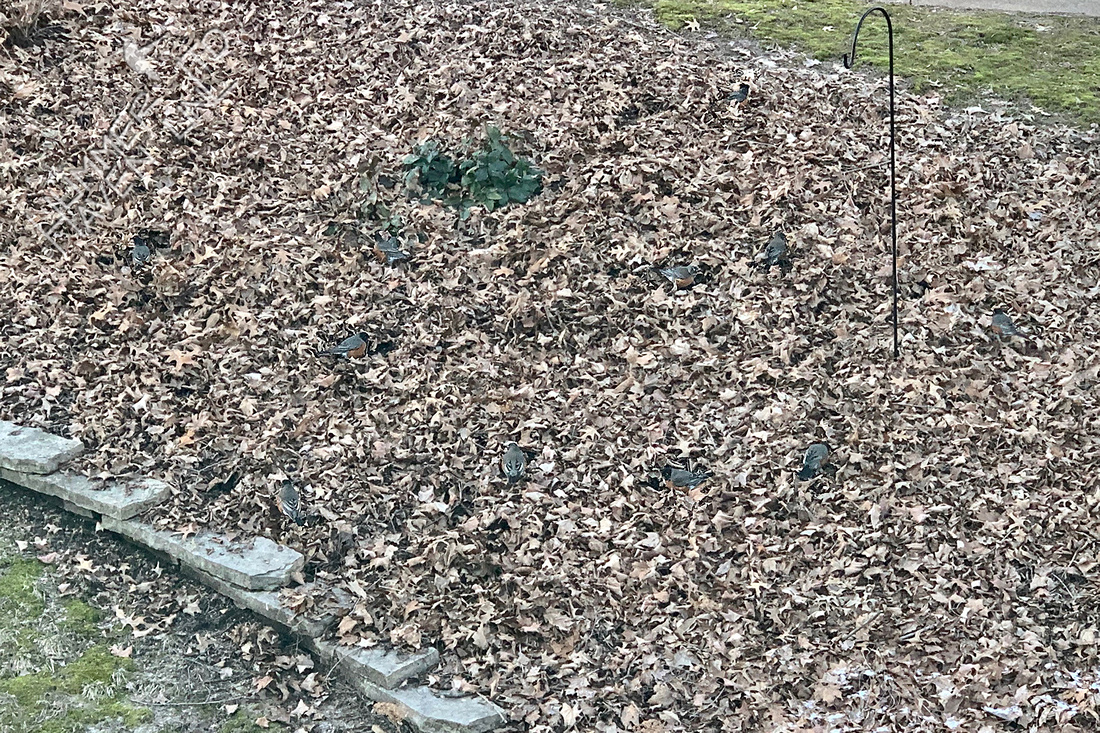 About 8:30 the next morning, I went to check the east side of the yard and found the robins had come in again, along with starlings and a new bird, #35 for the year, Rusty Blackbirds! There were at least 8 that I was able to isolate as they worked in the leaf litter. They're a favorite of mine to see in the winter. This species is in a severe decline and watching them forage and find food here is very gratifying. Our yards do make a difference in helping our native birds! 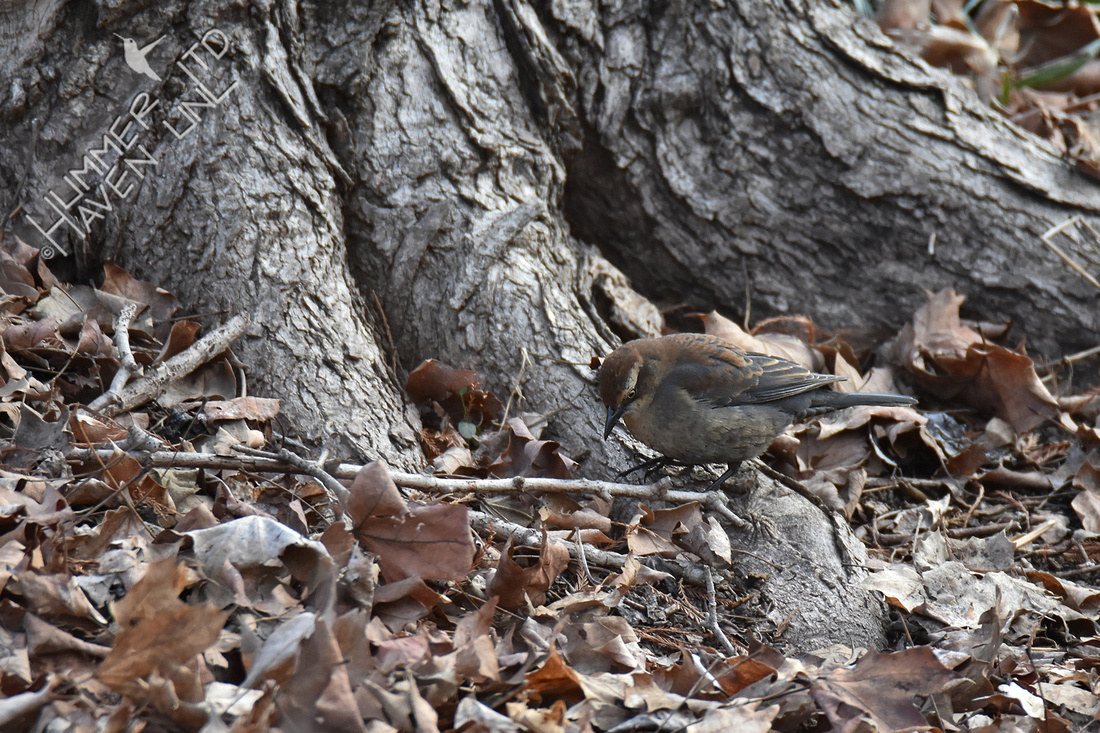 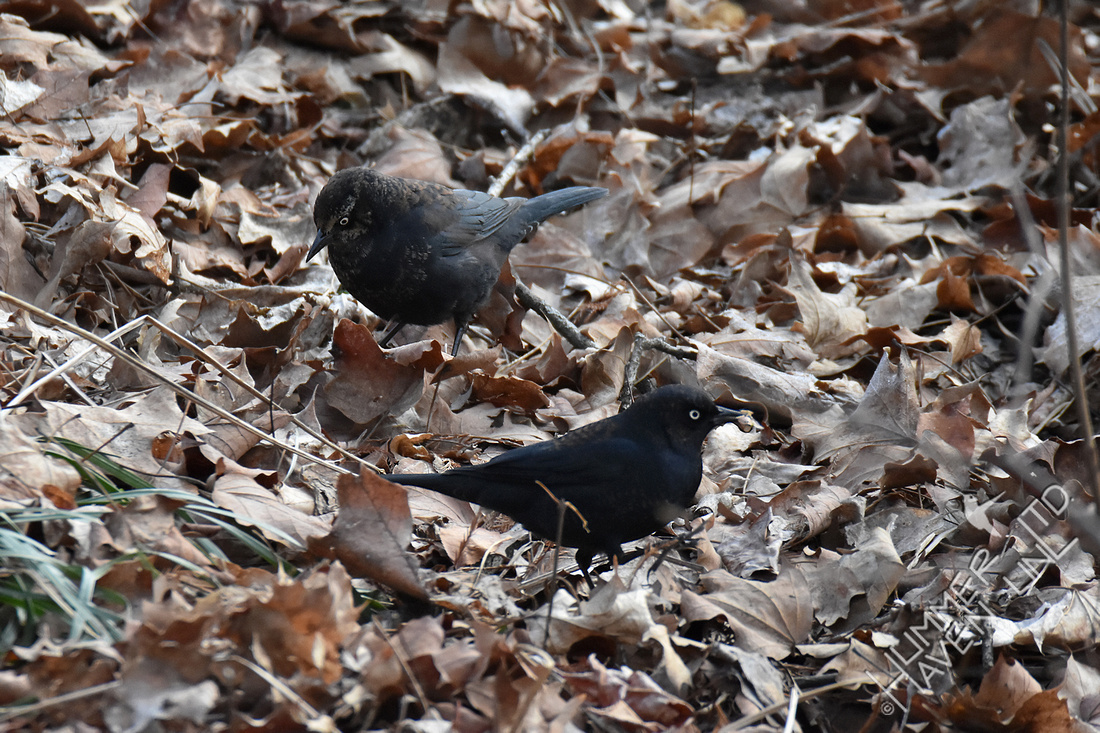 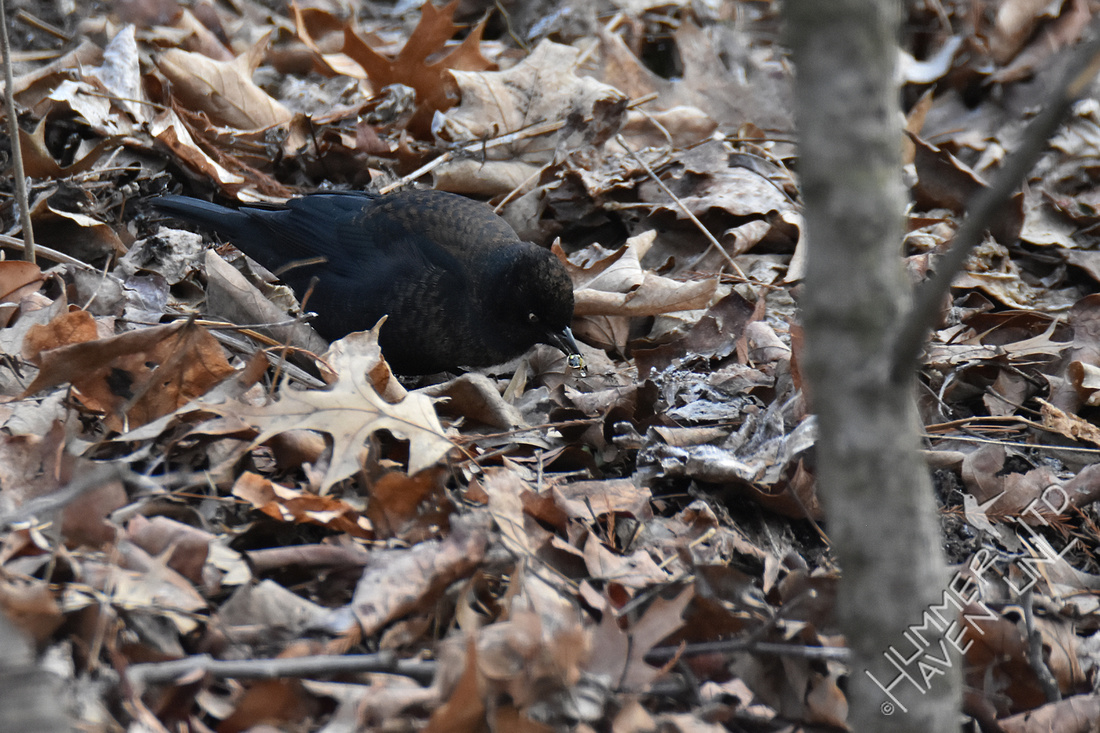 The Red-bellied Woodpecker was spending time on this side of the yard, as seen here on one of the sugar maples (Acer saccharum). 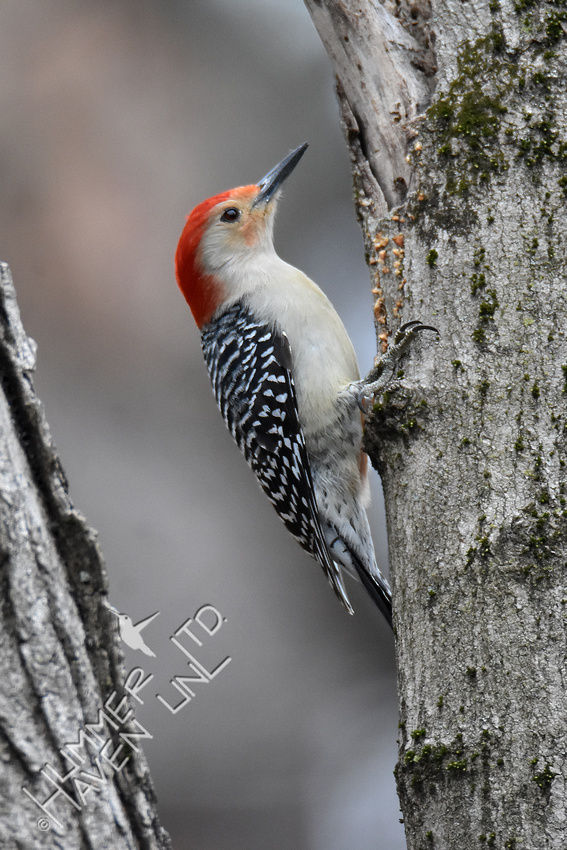 The American Robins were not deterred by the icy cold water in the stream bed. Several got in to bathe. 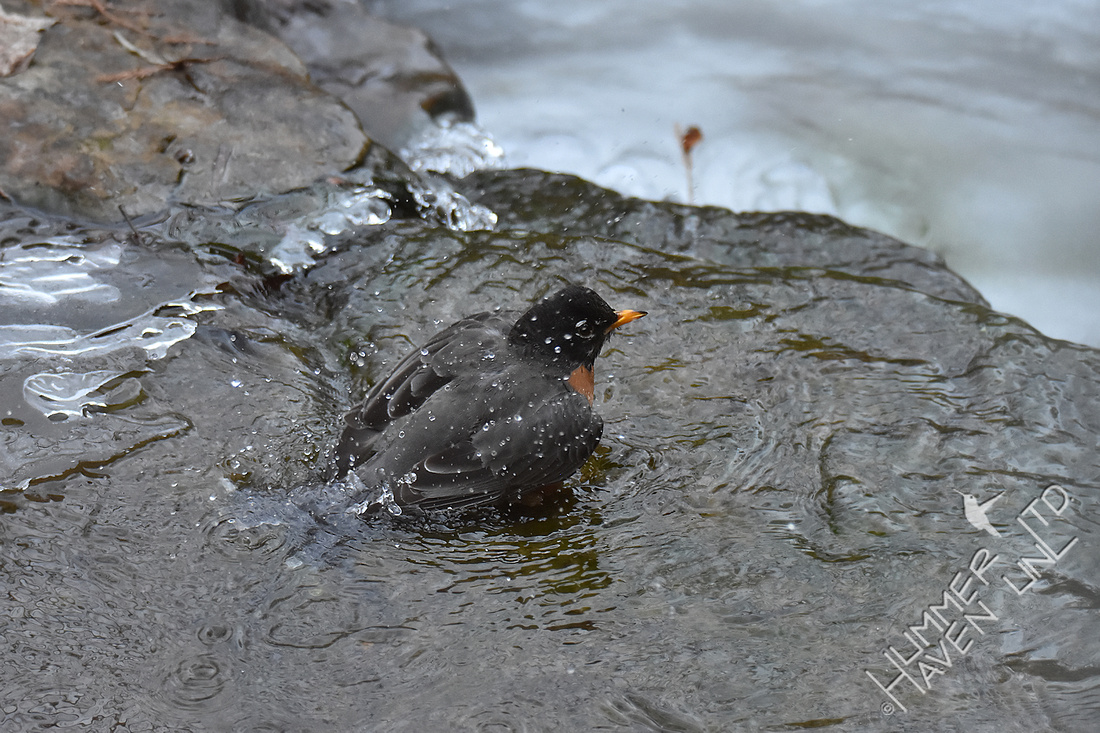 The flock of Rusty Blackbirds, robins and starlings were here until about noon. They continued to find insects to eat under the leaves and in the swampy thicket. At times, they flew into cover to rest, like the bird in the twiggy Buttonbush (Cephalanthus occidentalis). 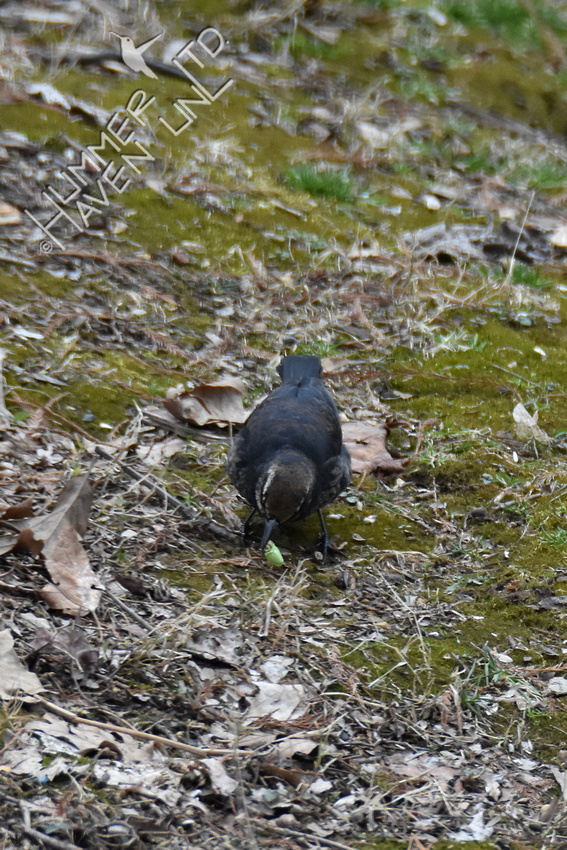 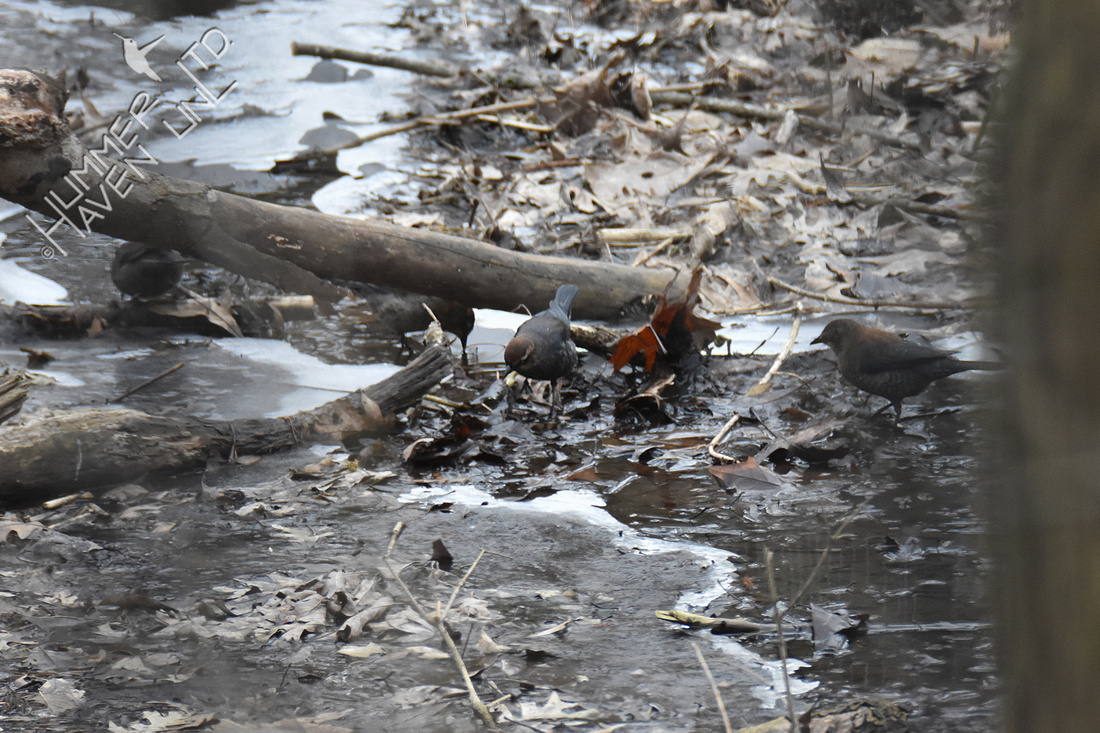 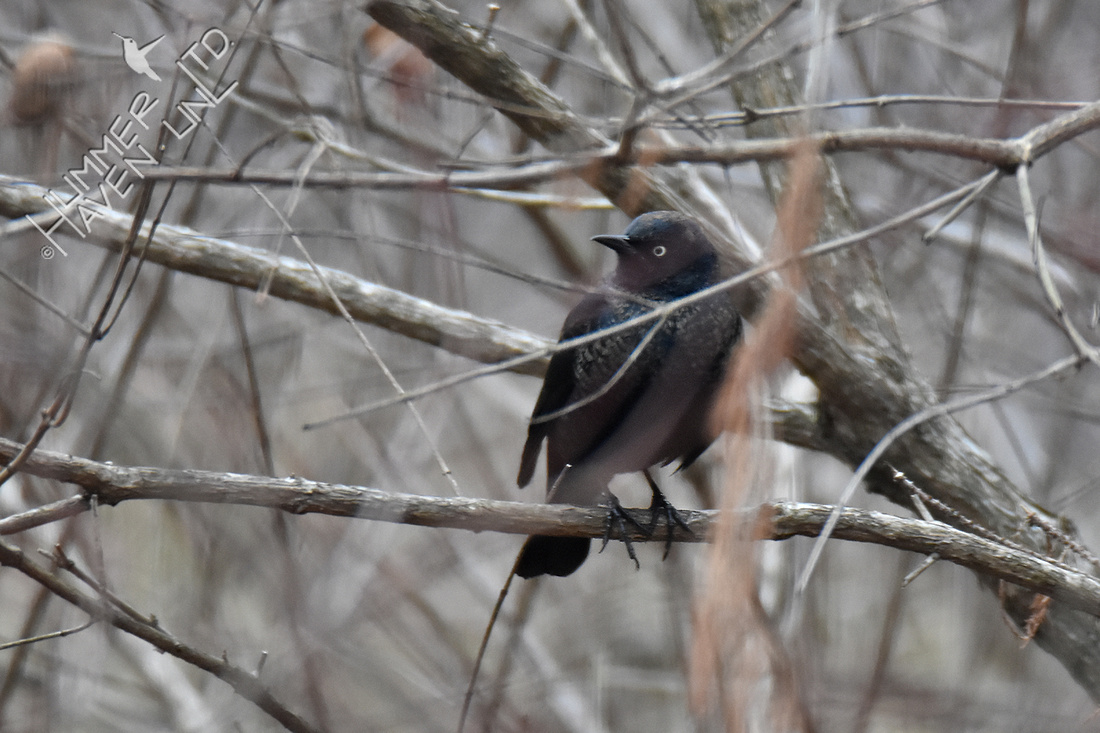 An American Goldfinch was able to drink at the basin by early afternoon as a Carolina Wren perched nearby. 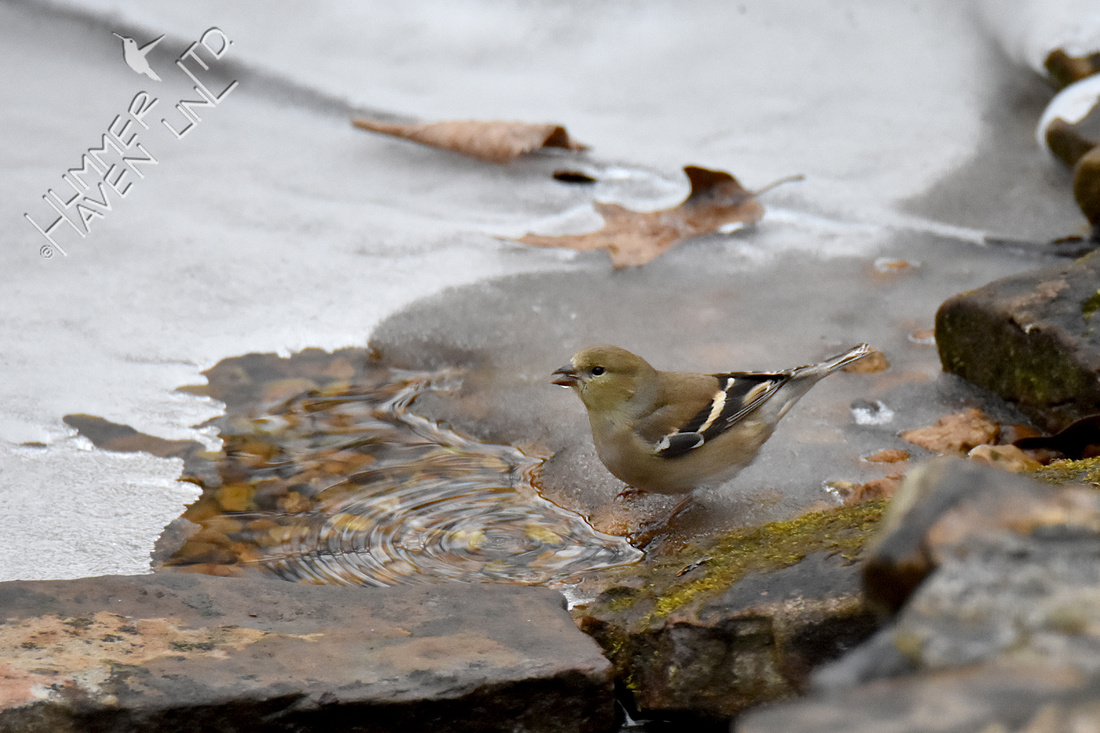 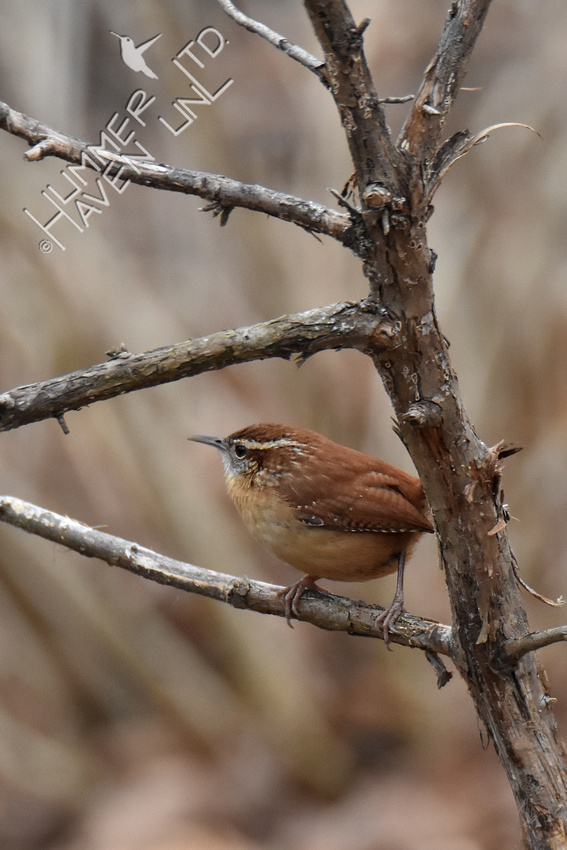 Sunday, 2-16-20, brought in 4 American Crows harassing the male Red-shouldered Hawk. It was interesting watching the larger birds. The hawk must have found a vole to eat in the swampy thicket, for it was low on the ground. The crows dived towards it, then the hawk flew to this perch and watched the crows intensely before going after them. It almost looked like a game of 'tag', but I suspect there was more to it! 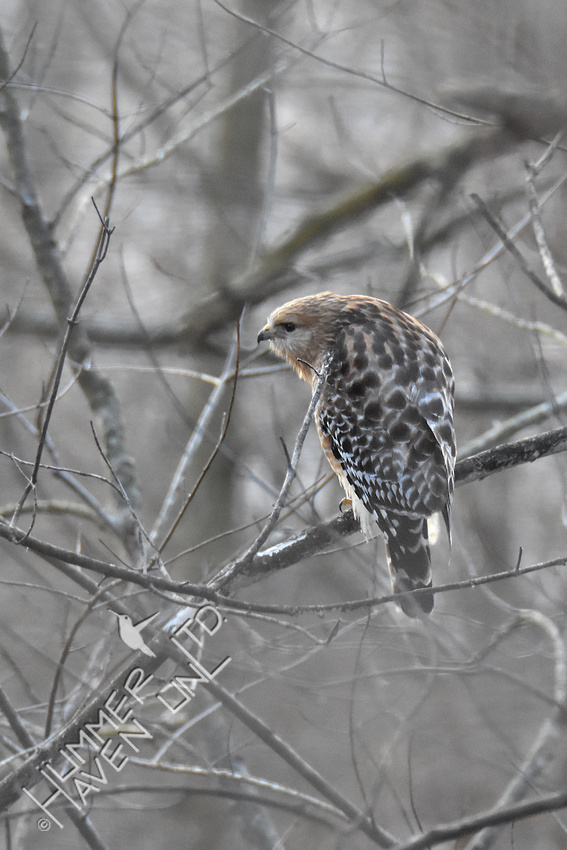 Enjoy our winter birds, for soon it will be spring!