A group of warblers has many collective nouns, including a "bouquet", "confusion", "fall", and "wrench" of warblers.

They can be especially confusing in the fall with the many plumage changes in adults and their new offspring.

Since last weekend, a cool front brought in one of the largest flocks of migrating warblers we've ever witnessed here. The whole yard was literally sparkling with birds, electric with their activity on Thursday, 9-26-19. I've seen more species over a long day, but this day was exceptional in the number of birds of each of the 13 species I was able to document.

The morning began with birds at the bubbler, an American Redstart and Bay-breasted Warbler were in the basin. 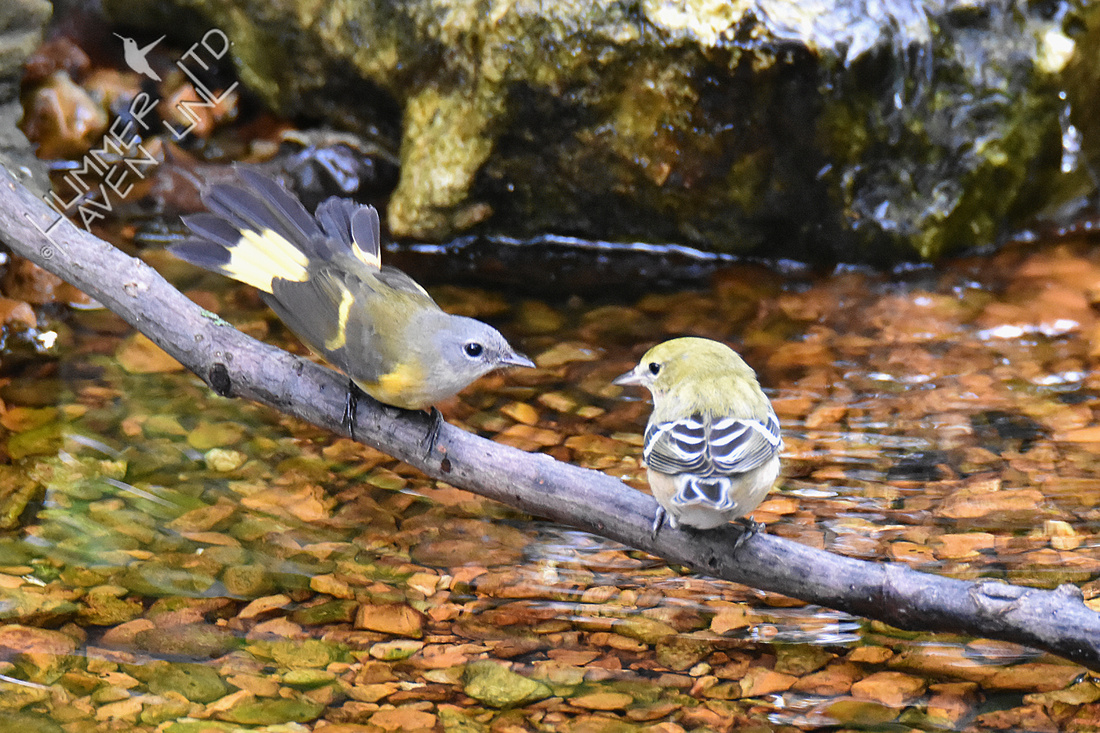 The first of fall Ovenbird was marching around the bubbler and found a roly-poly to eat. One of several Northern Parulas came to the bubbler, too. It took years to get the first parula interested. 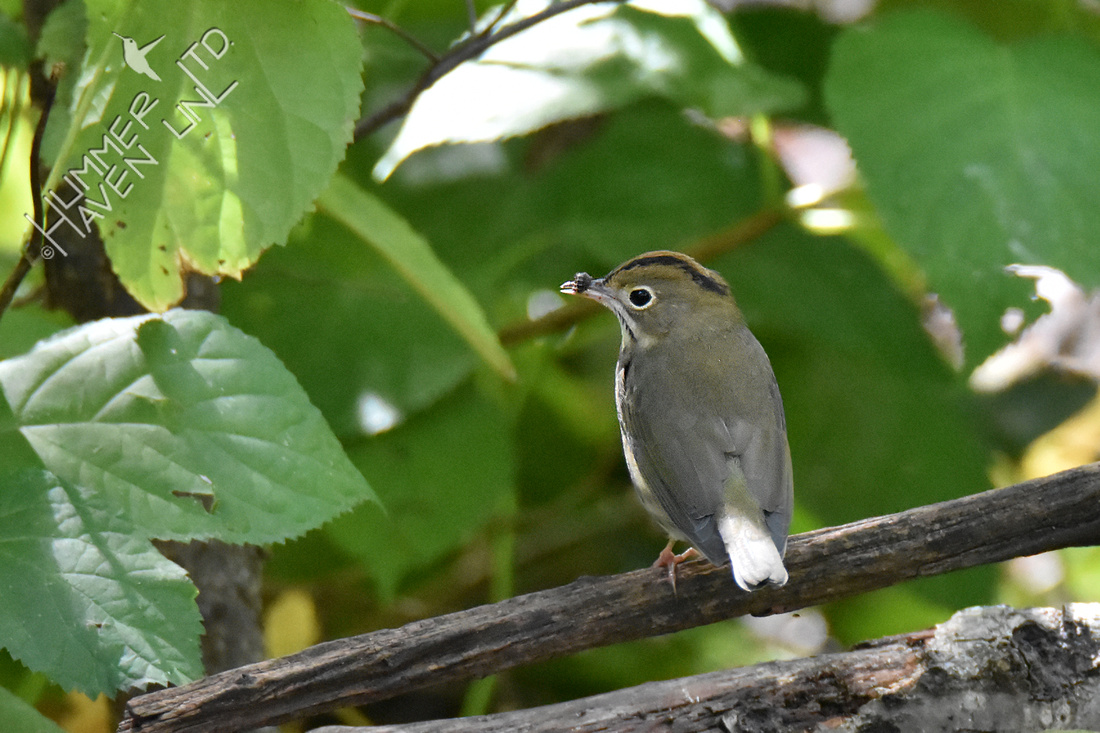 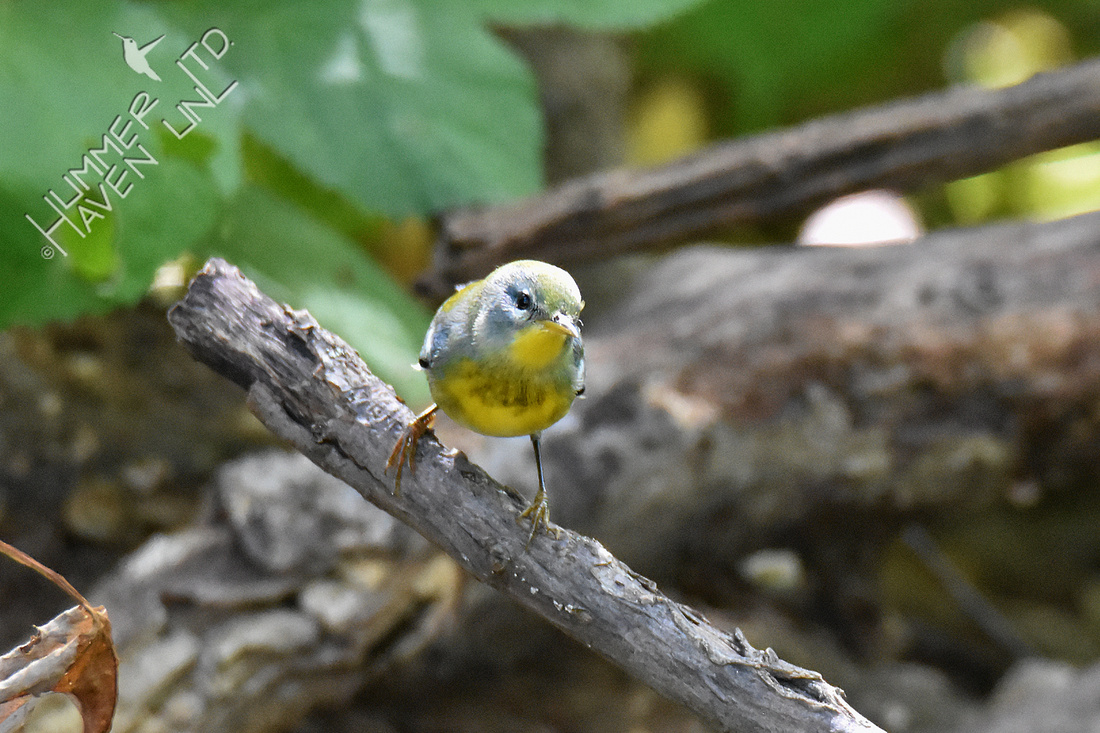 Then, things slowed down and I came in to work a while. Dan cut the grass in front and swept the driveway. About 11:00 am, he finished and I was glad he was done, birds had started coming down again. Oh, my goodness, did they ever! A few times, there were at least six different species of warblers on the bubbler rock. Multiples of some seen below:  Northern Parula, Nashville, Chestnut-sided, Tennessee, Bay-breasted and American Redstarts. 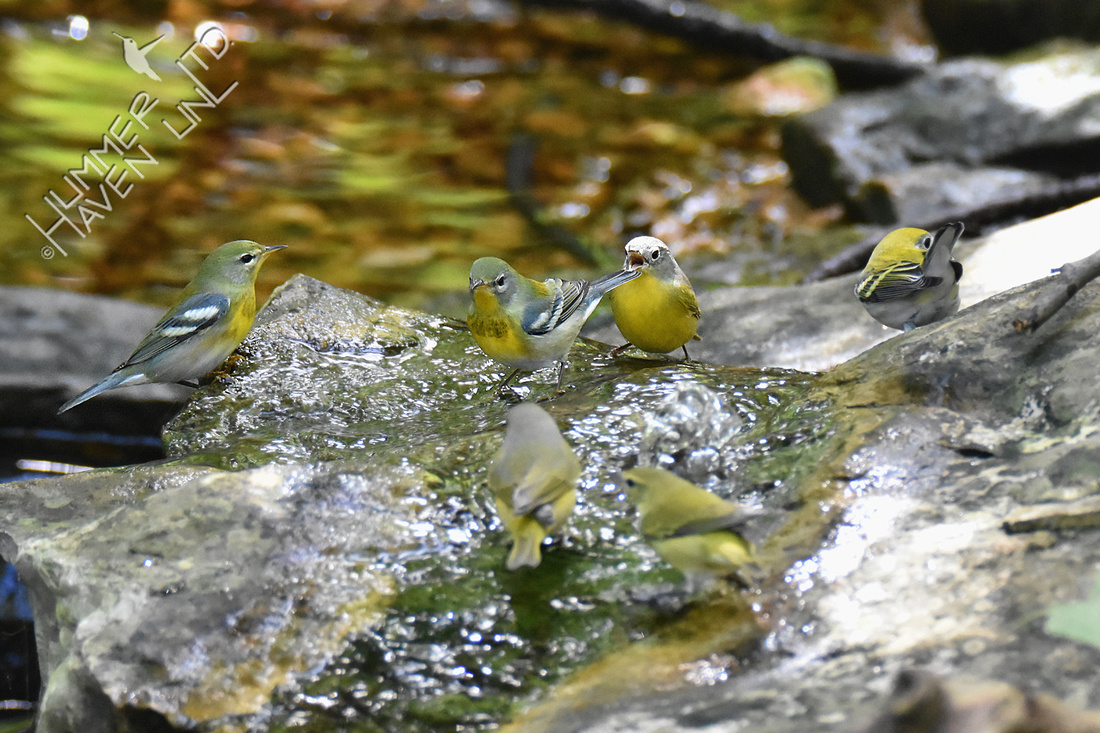 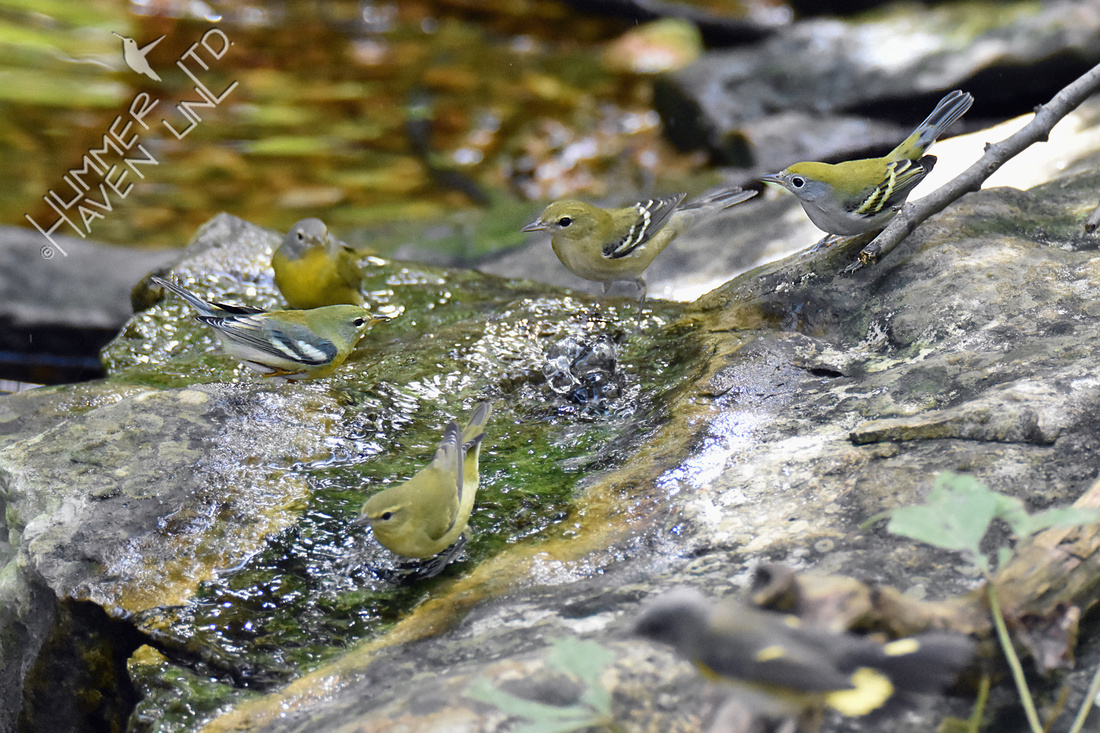 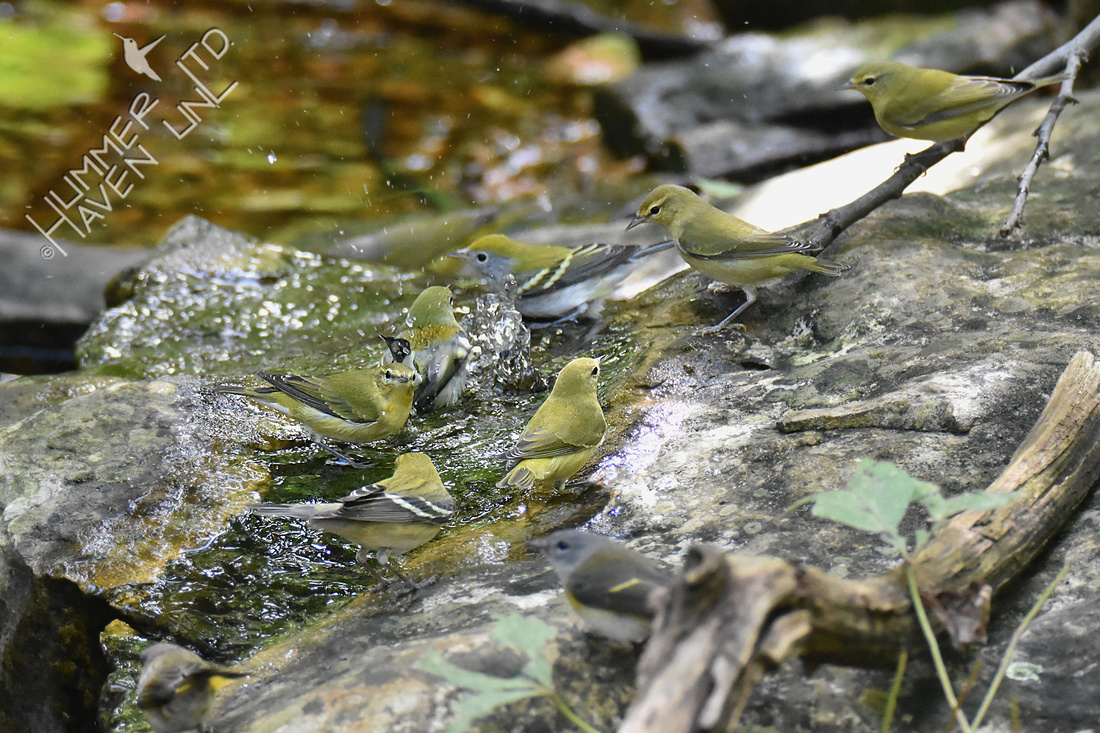 Phew. I sat back and caught my breath as they whirled up into the thicket of trees. Soon, I realized that the activity had just moved  into the garden and pond area. There were so many birds, but I had to buckle down and lock in on some. A first of fall young male Common Yellowthroat was foraging low in the Clove Currant (Ribes odoratum). A first of fall Yellow-rumped Warbler was higher in the same shrub. 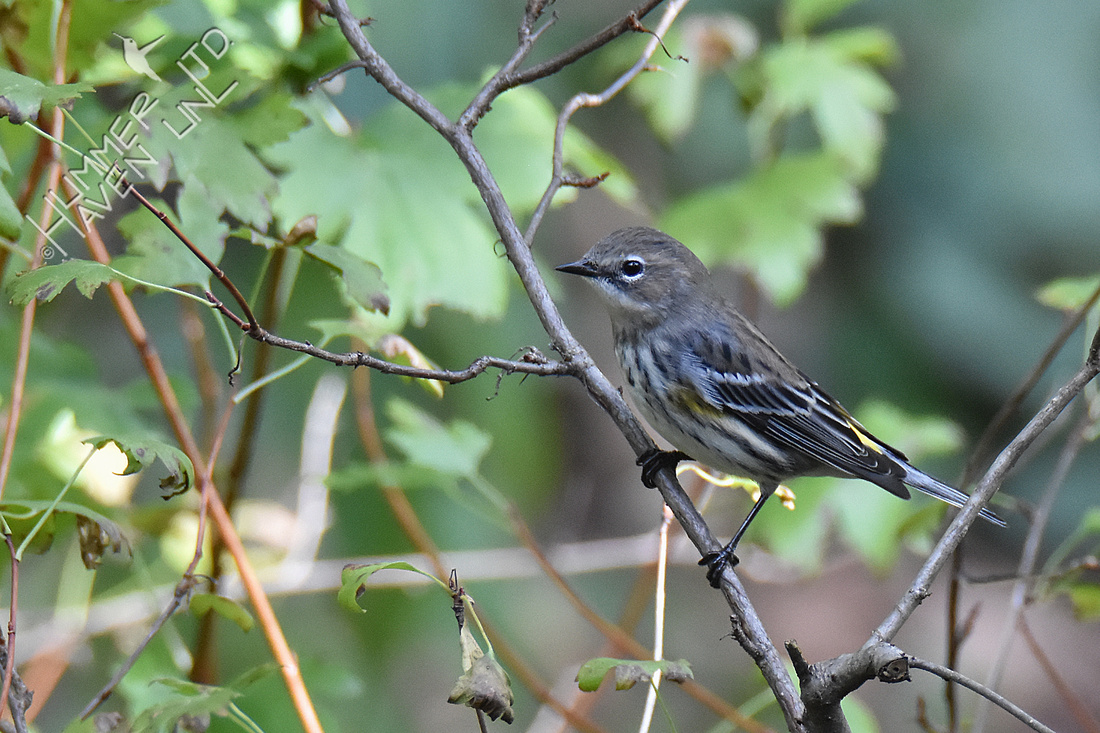 Birds were having fun at the little dripper bath, too! American Redstarts, Northern Parulas, Black-and-white and Tennessee Warblers all wanted to dive in. I had never seen this much action there before. Three Northern Parulas at once? 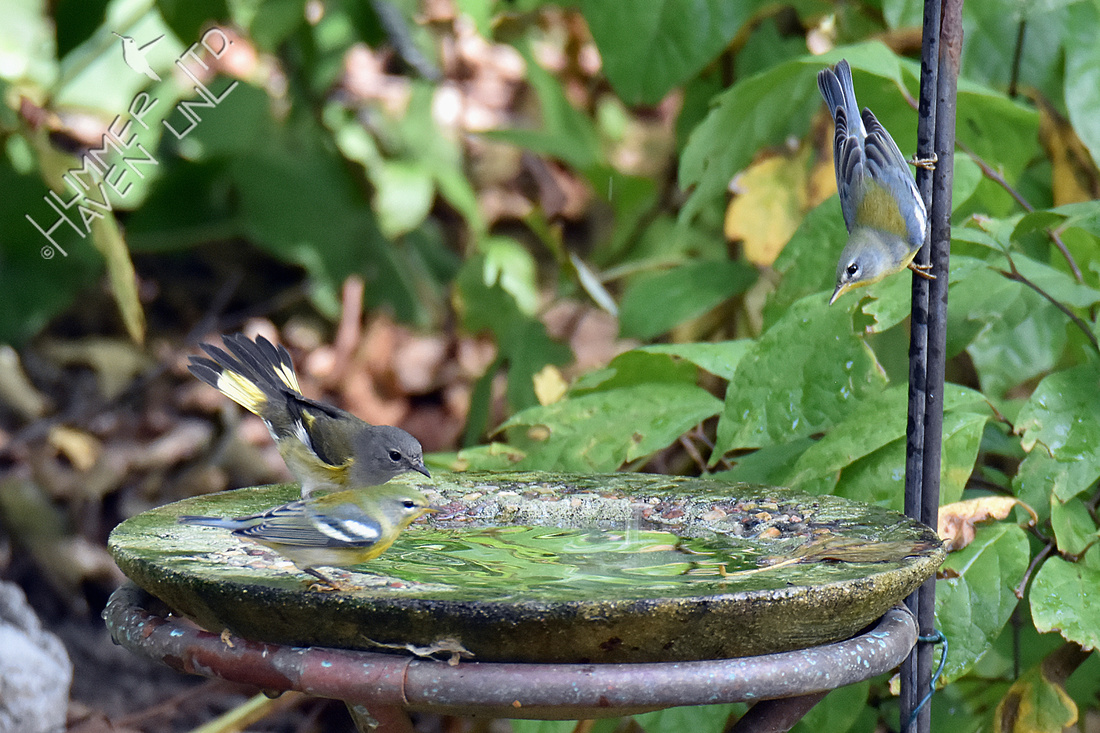 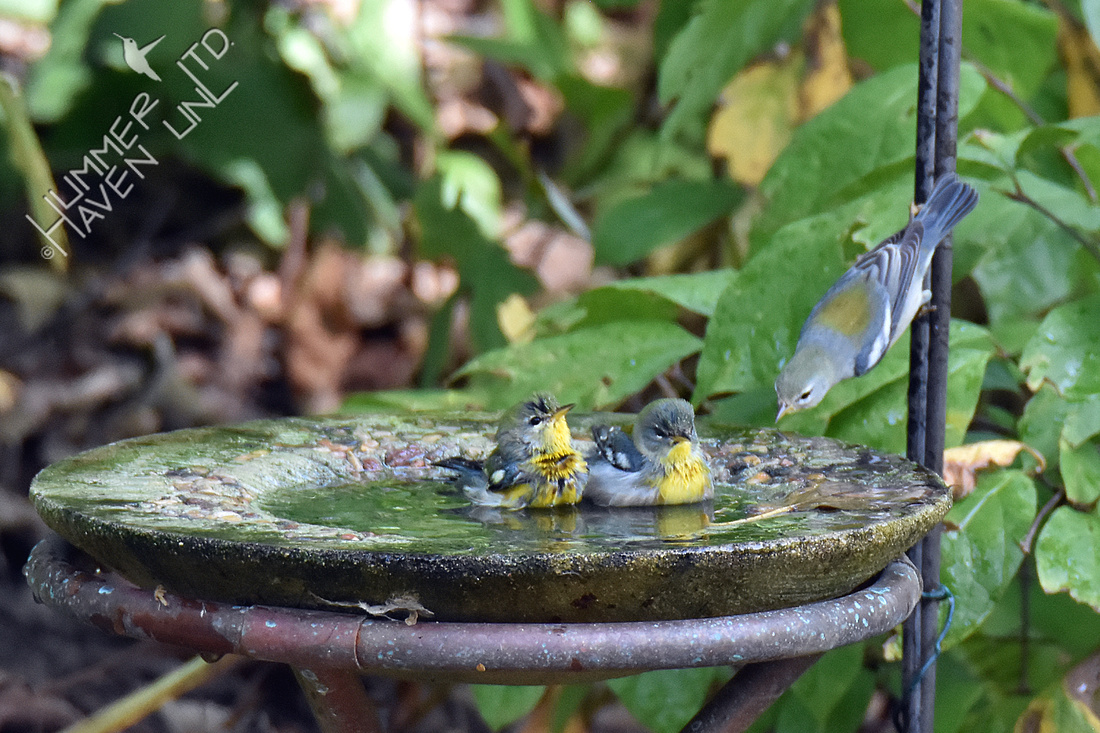 Back in the shrubs, a Nashville Warbler found a small green insect for a meal as a Magnolia Warbler moved through on a lower branch. 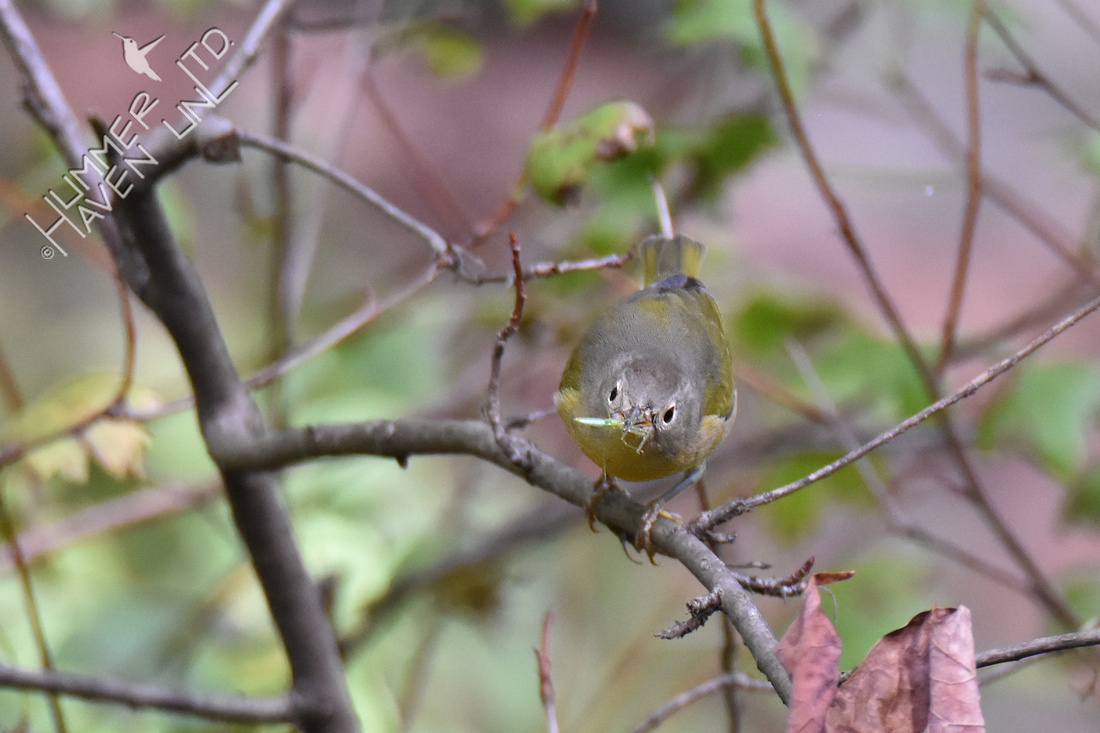 It was time to check the bird and butterfly garden. Some Tennessee Warblers and American Goldfinches were working the top layers. Then, I saw a promising bird, partly concealed and low in the vegetation. It took some time before it came into a more open area. It was the second Mourning Warbler this month, a first fall female. 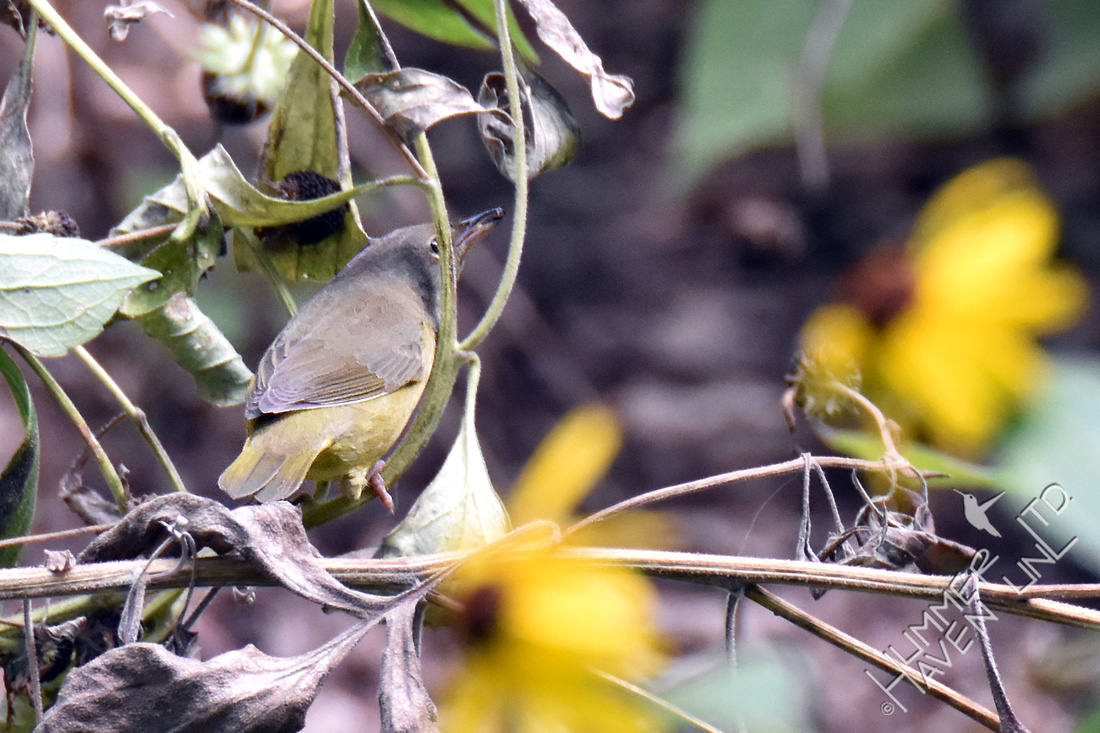 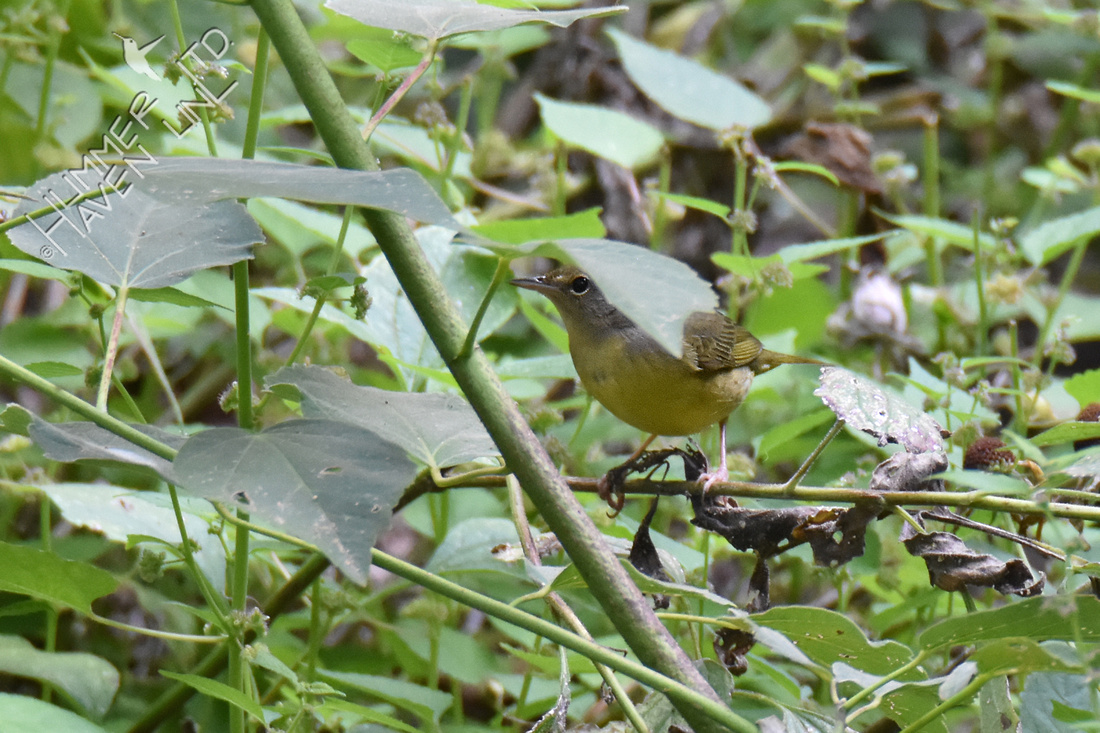 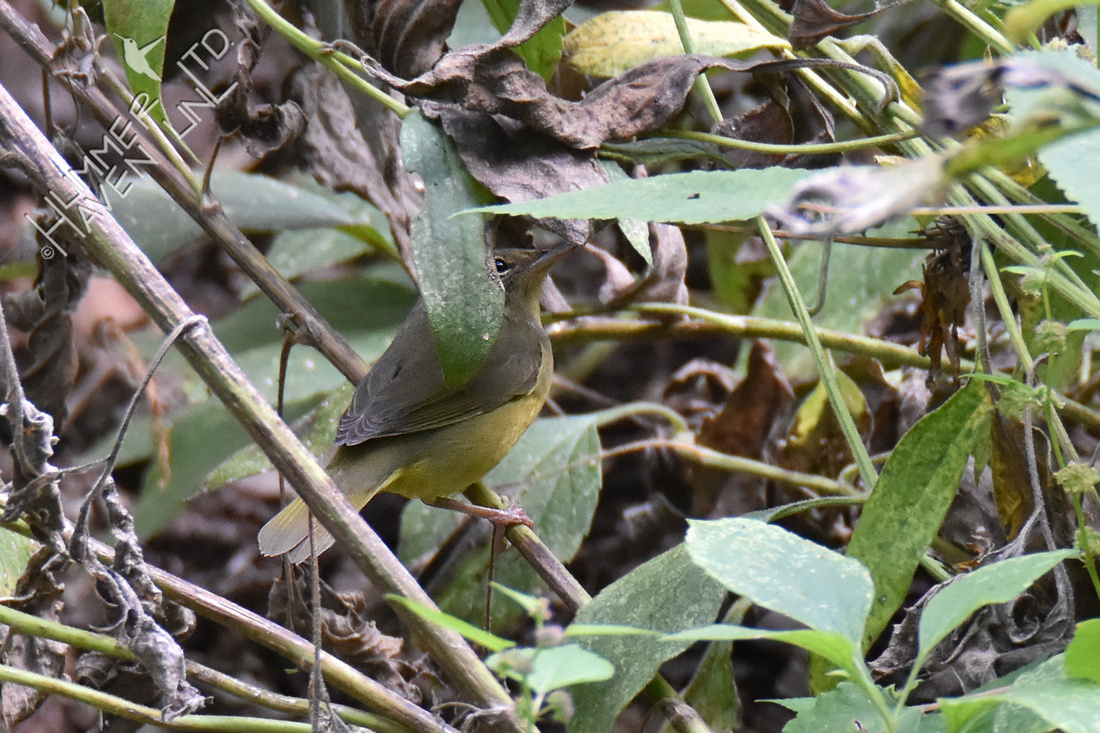 What a way to end a glorious day! I can't begin to describe the feeling of being awe-struck by the entire experience. All the effort over the past 23 years was highlighted with this lovely flock of birds searching through the plants, exploring the water features and making themselves right at home. Restoring habitat works!

The next day, there were 11 species of warblers, still in good numbers. A Magnolia Warbler took advantage of spa time in the dripper bath. 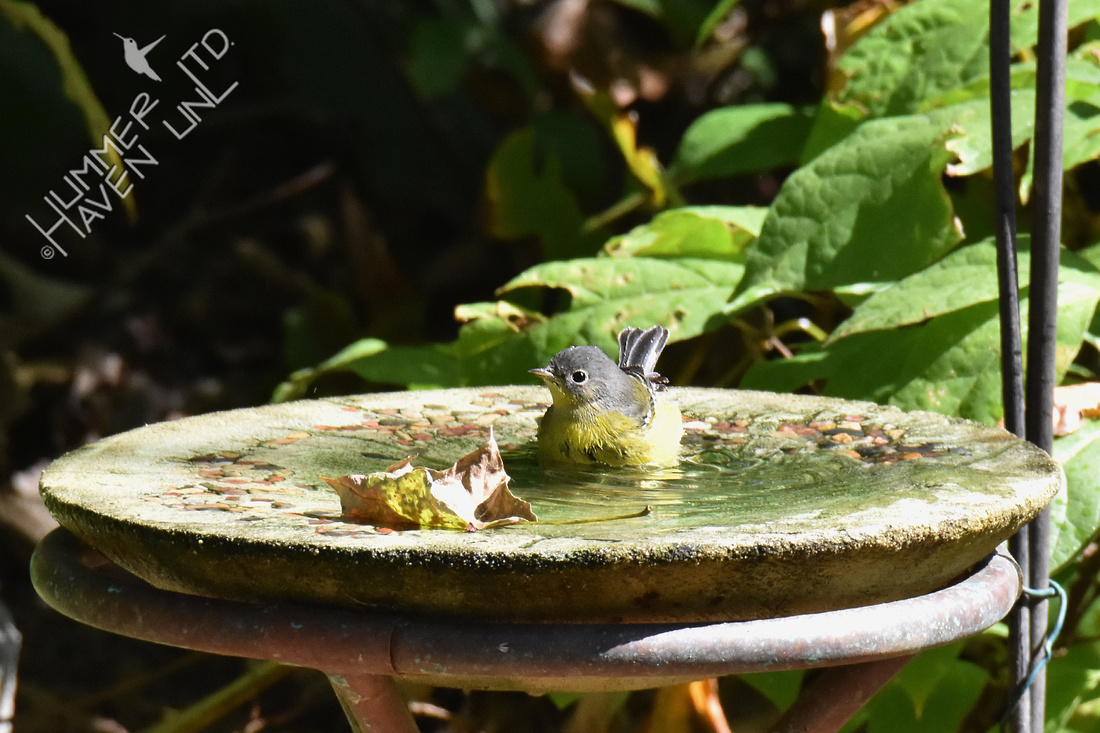 A Chestnut-sided Warbler flew into a Spicebush (Lindera benzoin) to assess its access to the stream bed. It flew across to the cedar perch, then got in to bathe and enticed a Bay-breasted to join in. 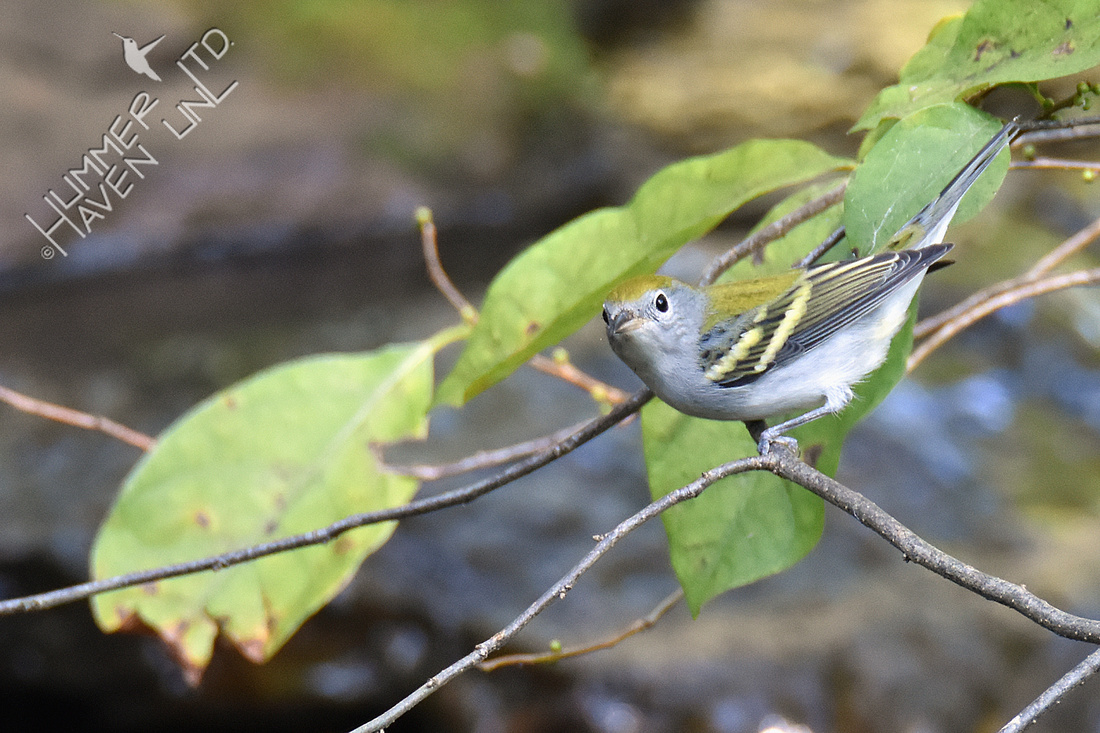 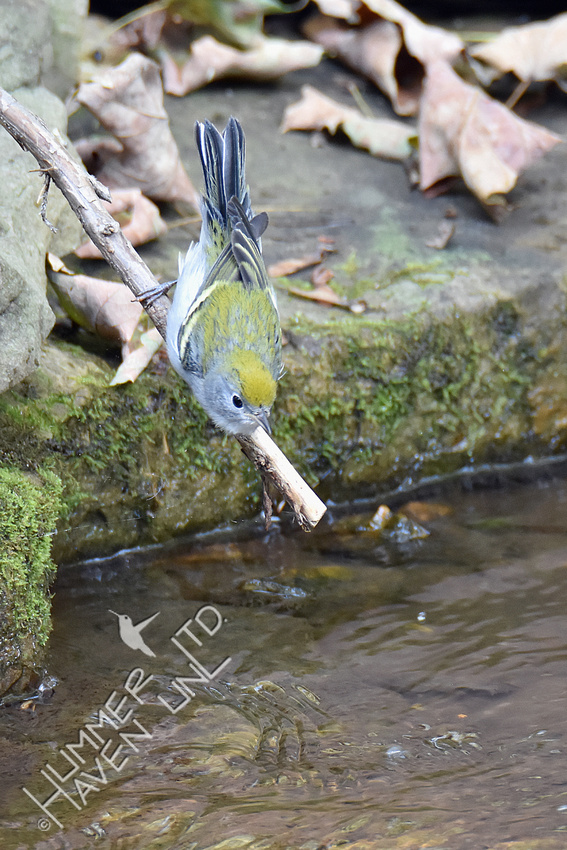 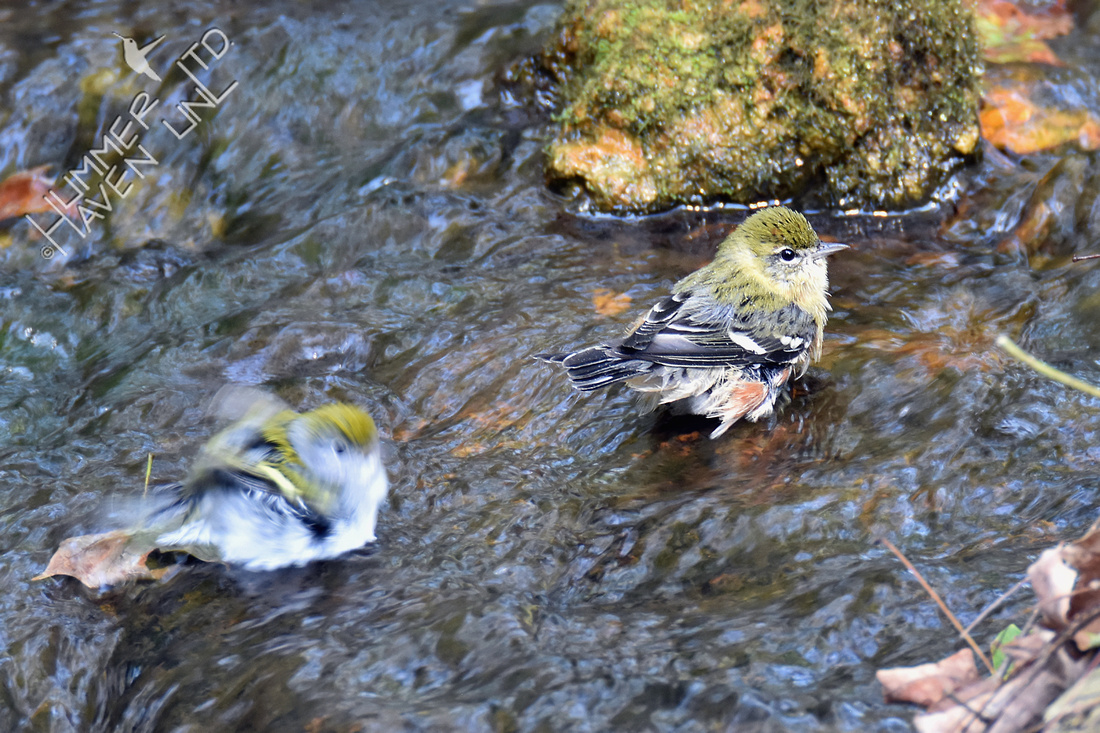 Meanwhile, Nashville and Tennessee Warblers were in the dripper bath; an American Goldfinch waited on the rim. Several birds got in the basin later in the afternoon. Tennessee, Nashville, and a Black-throated Green cooled off together. 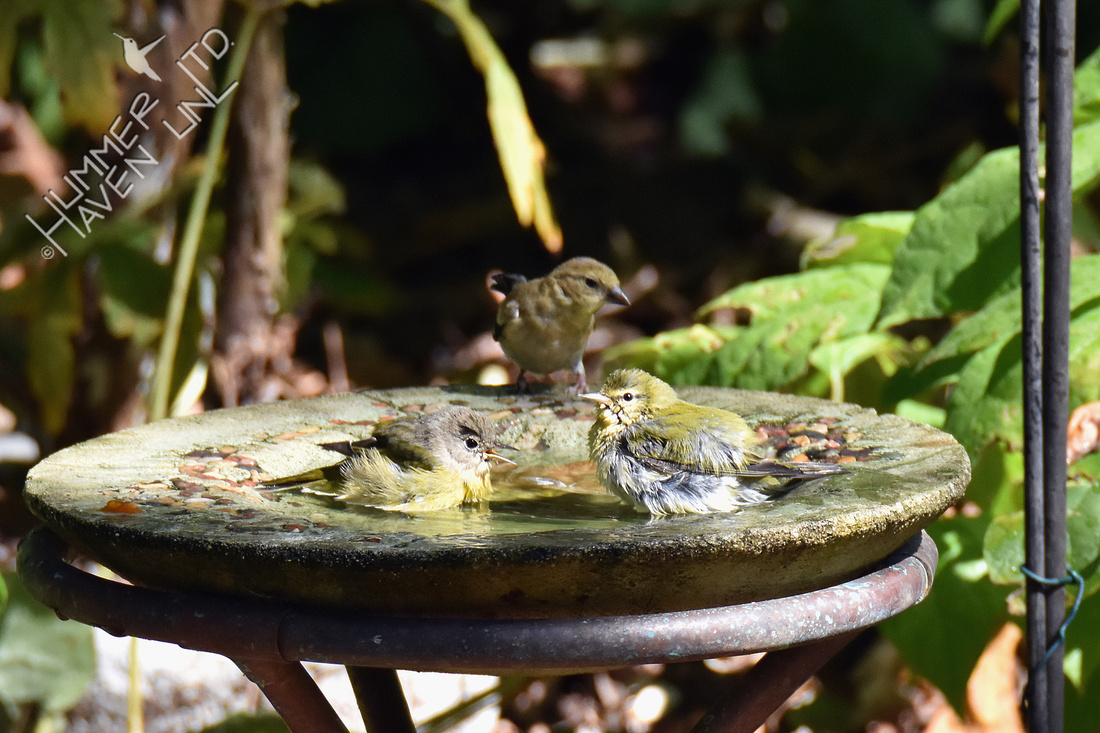 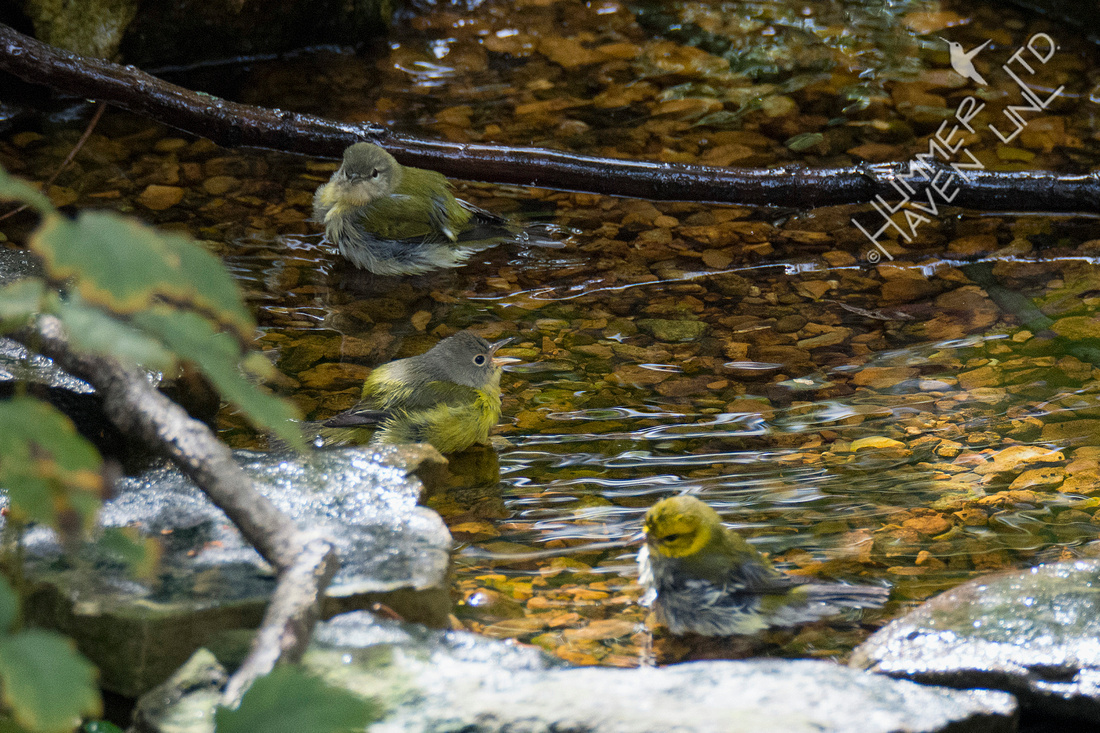 If you'd like to look at all the photos since the last post, and there are many, you may begin here: