Last Sunday, 9/15/19 there were some migrants here. A first year male Chestnut-sided Warbler was hungrily working a Blackhaw (Viburnum prunifolium) on the west side of the bubbler. This is one of four viburnums that was finally able to grow once we removed the invasive bush honeysuckle. The bird was finding all sorts of small brown insects along the branches. 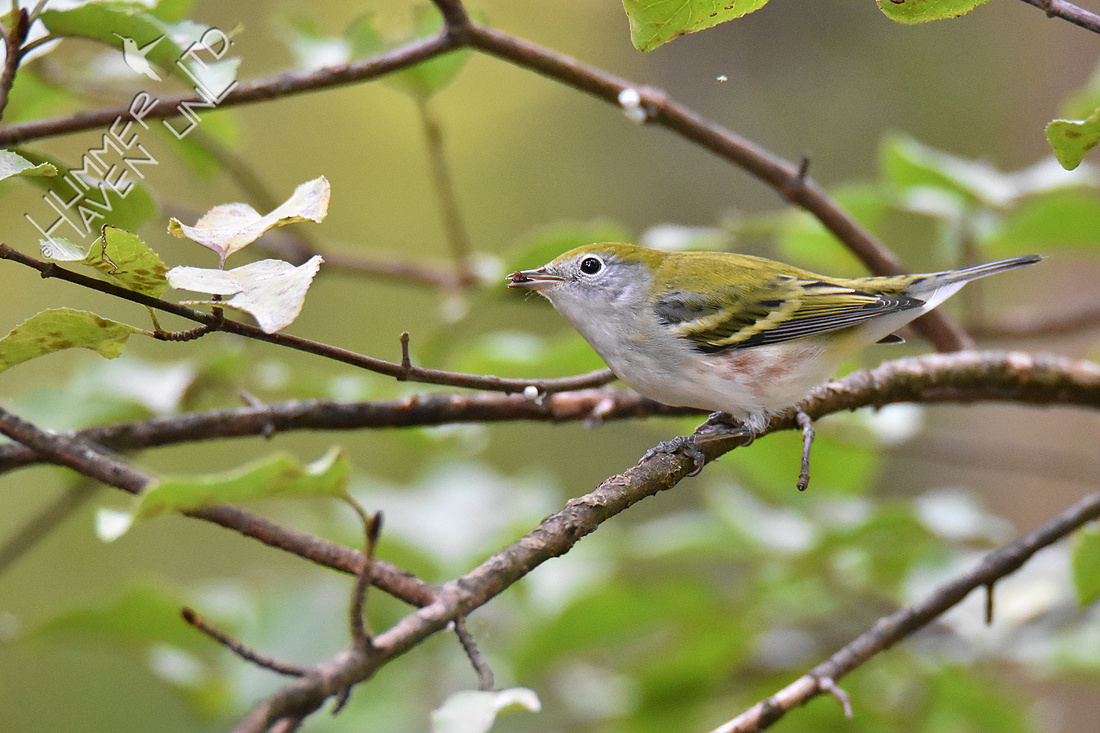 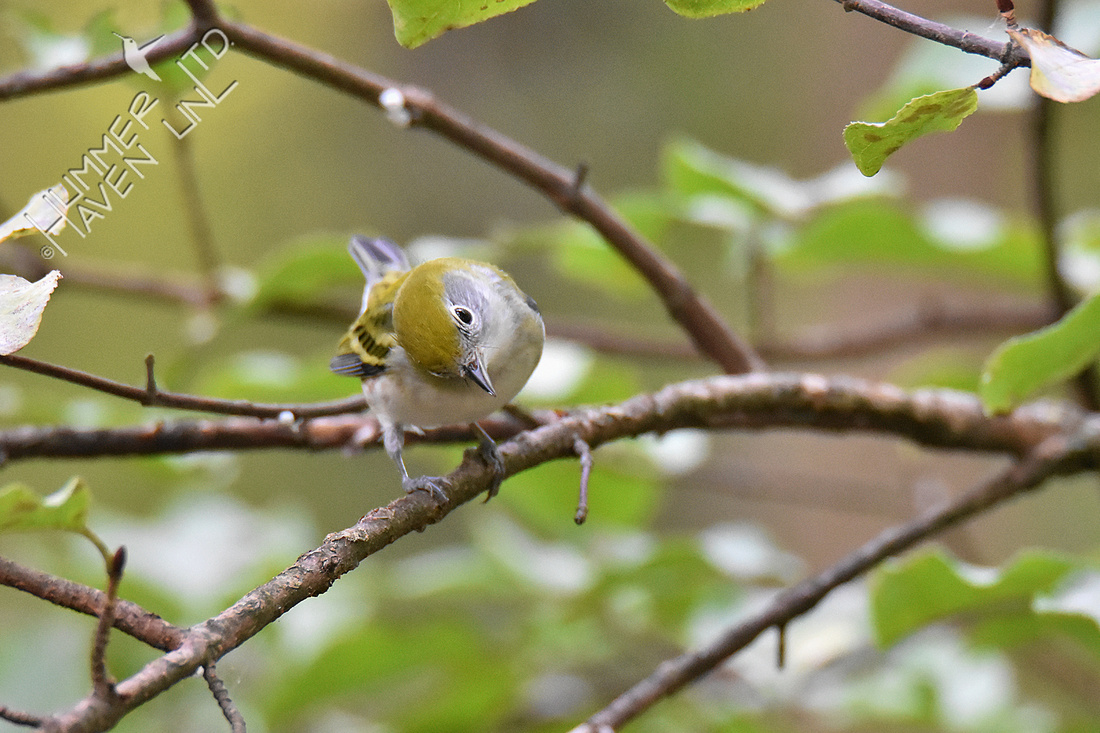 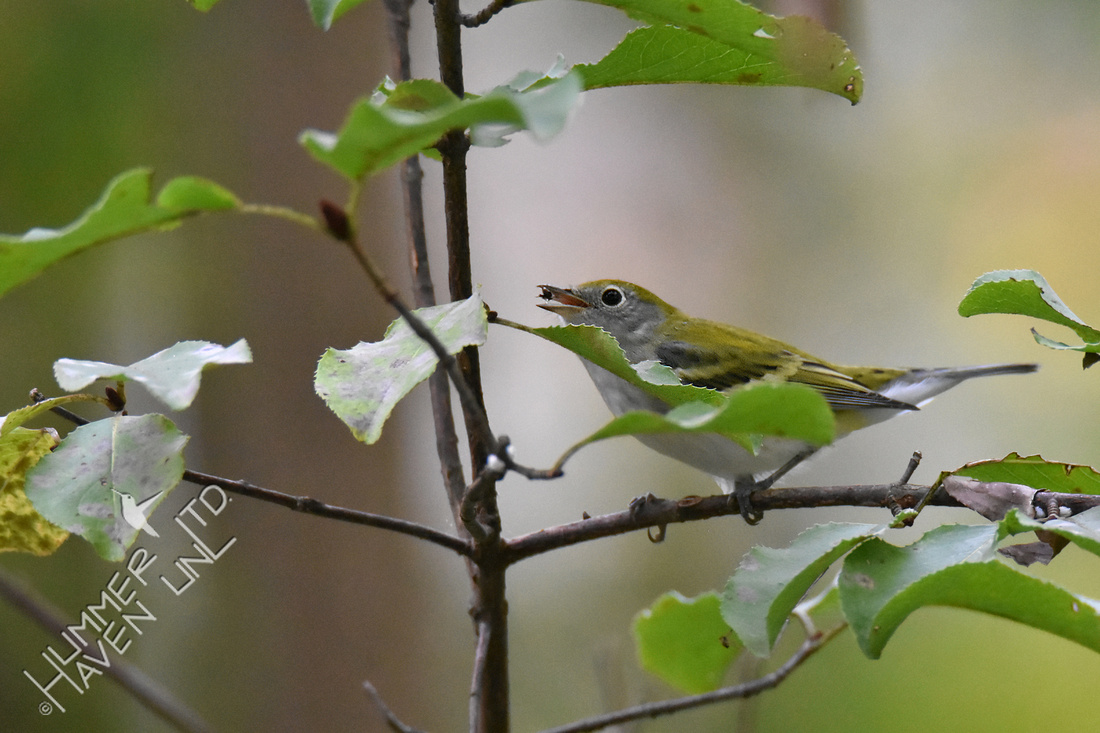 While eating those, it spied a larger meal, a greenish caterpillar that I certainly did not see until I was reviewing photos later. Could hardly believe how it blended in with the leaves! Wow! This is one of 88 species of moth and butterfly caterpillars, Lepidoptera or 'Leps' that are found on the Viburnum genus of native shrubs in our area. This is definitely a favorite plant of the birds! 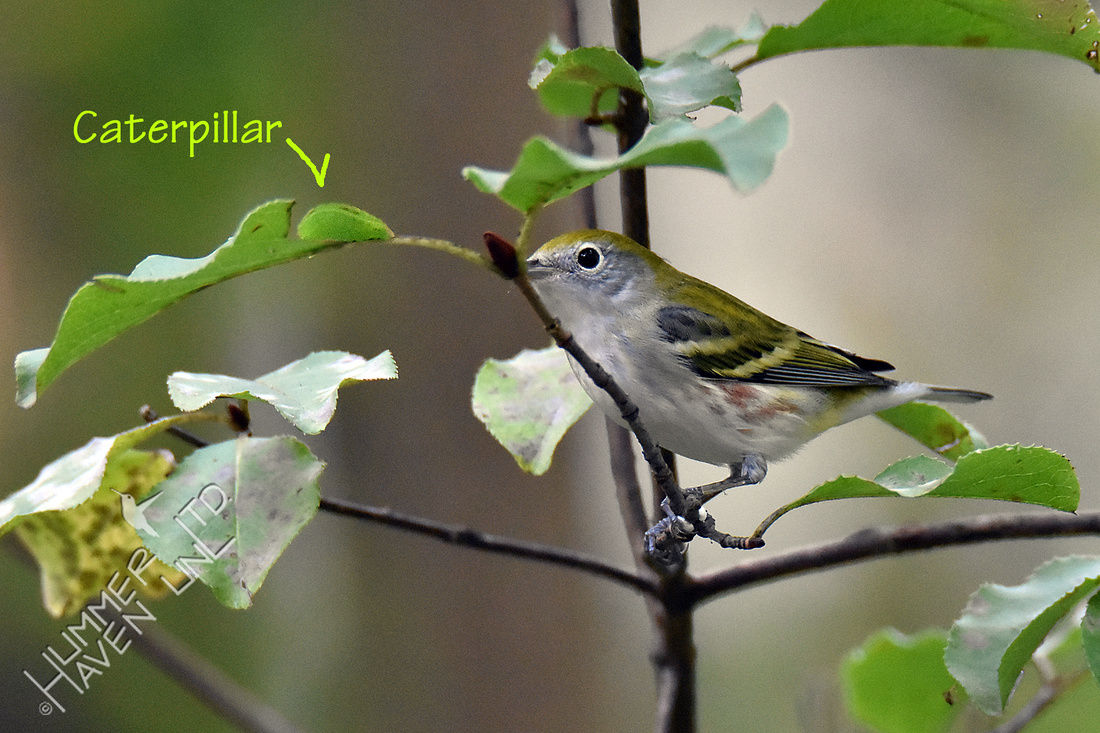 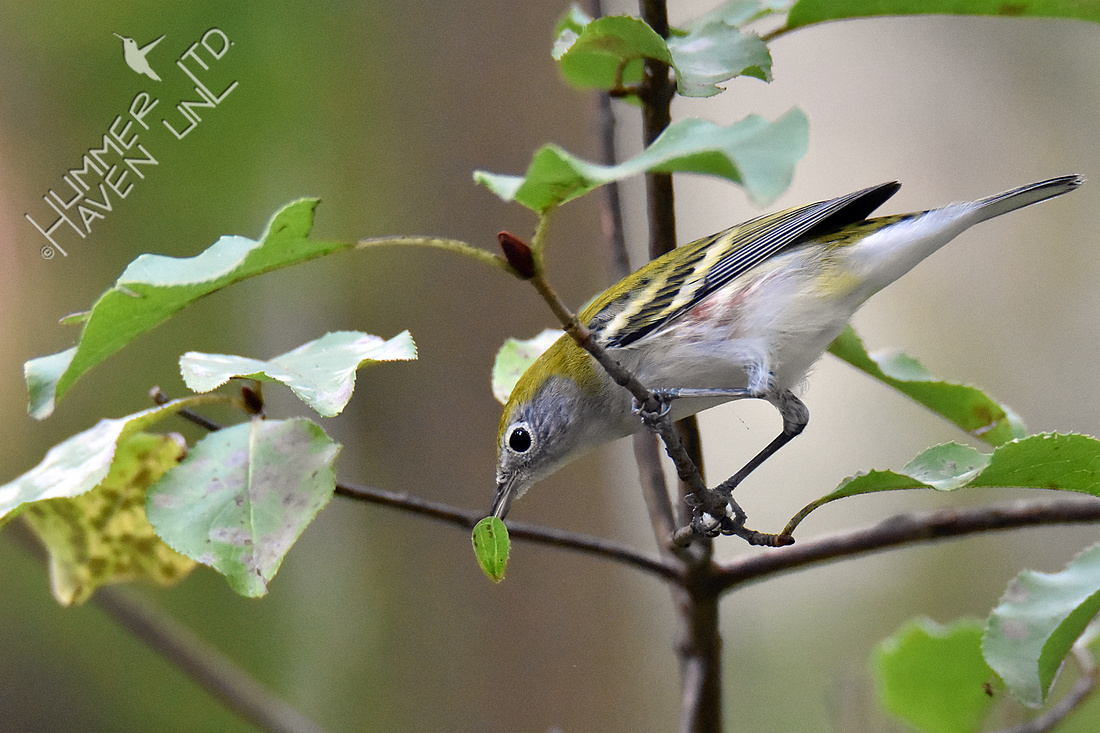 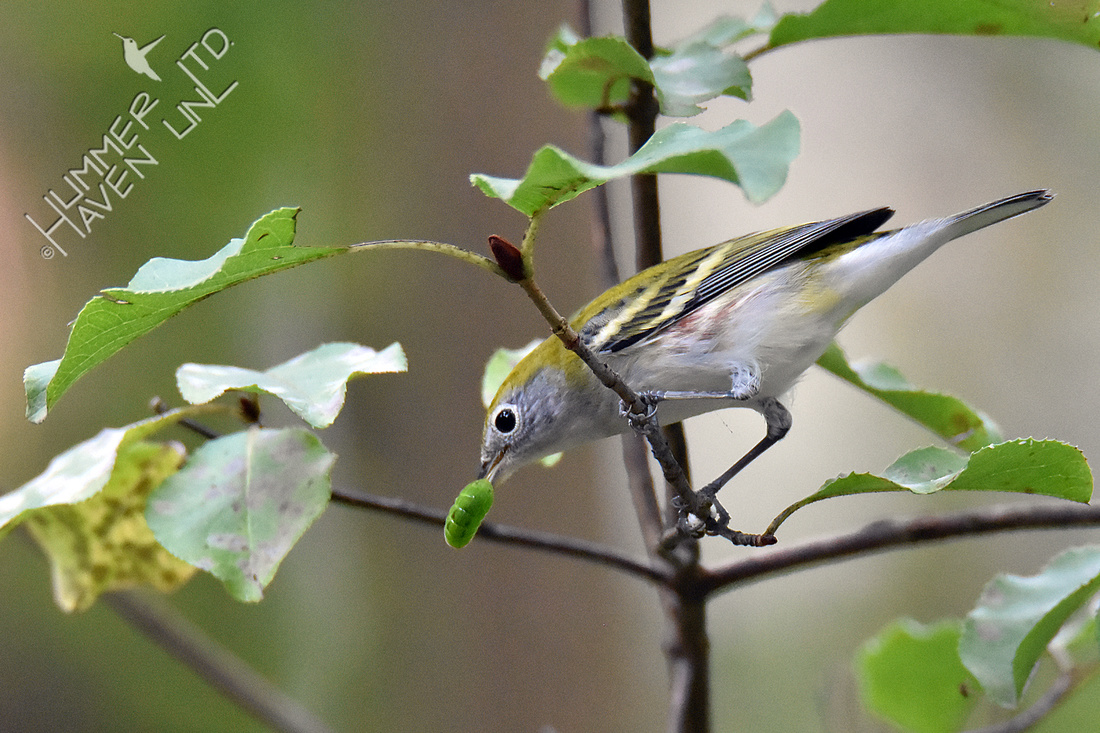 The little bird squeezed it, whacked it, squeezed it and whacked it again, like a sushi chef on a cooking show. 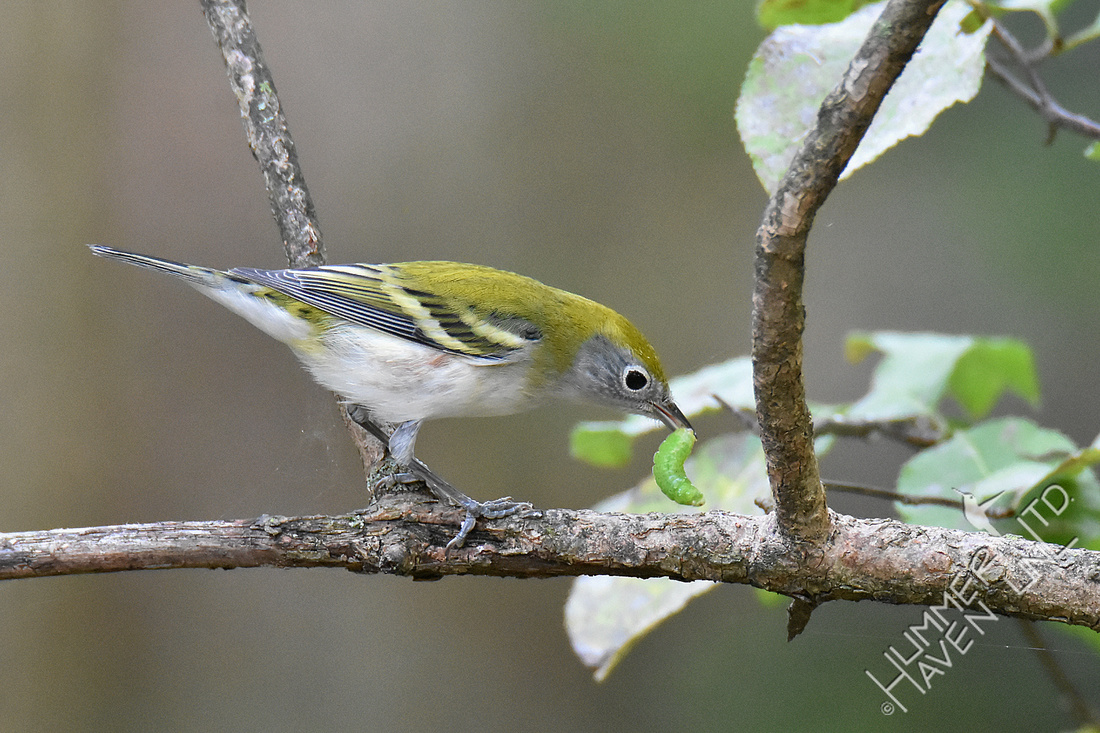 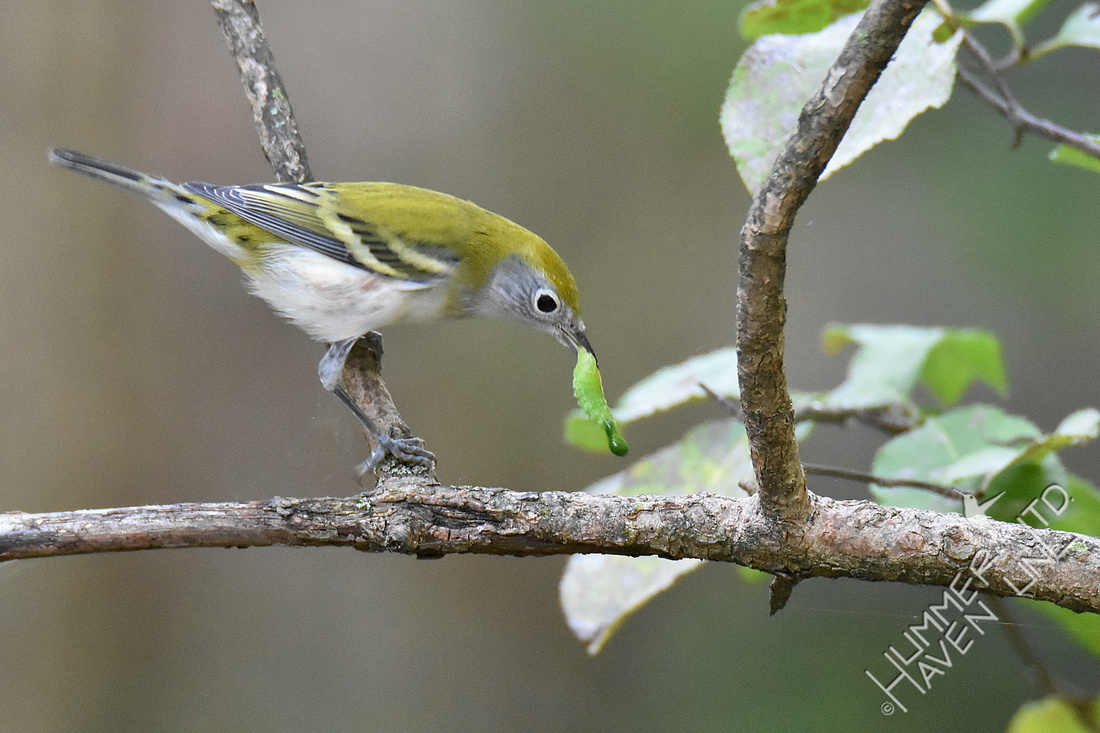 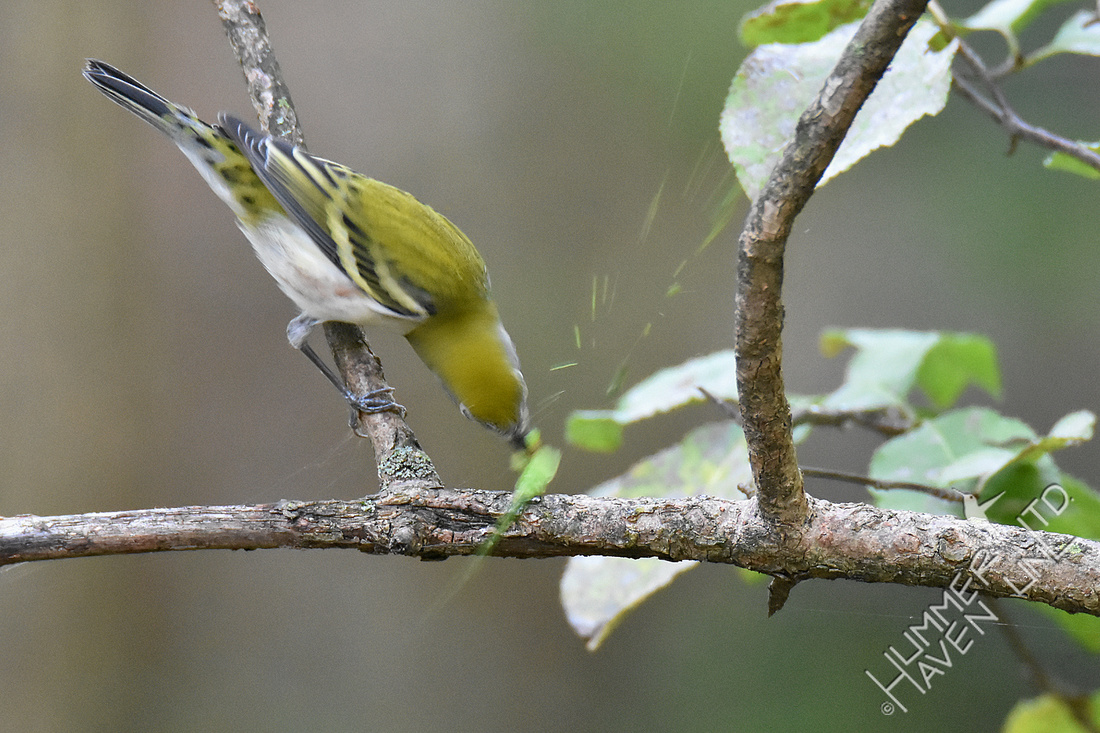 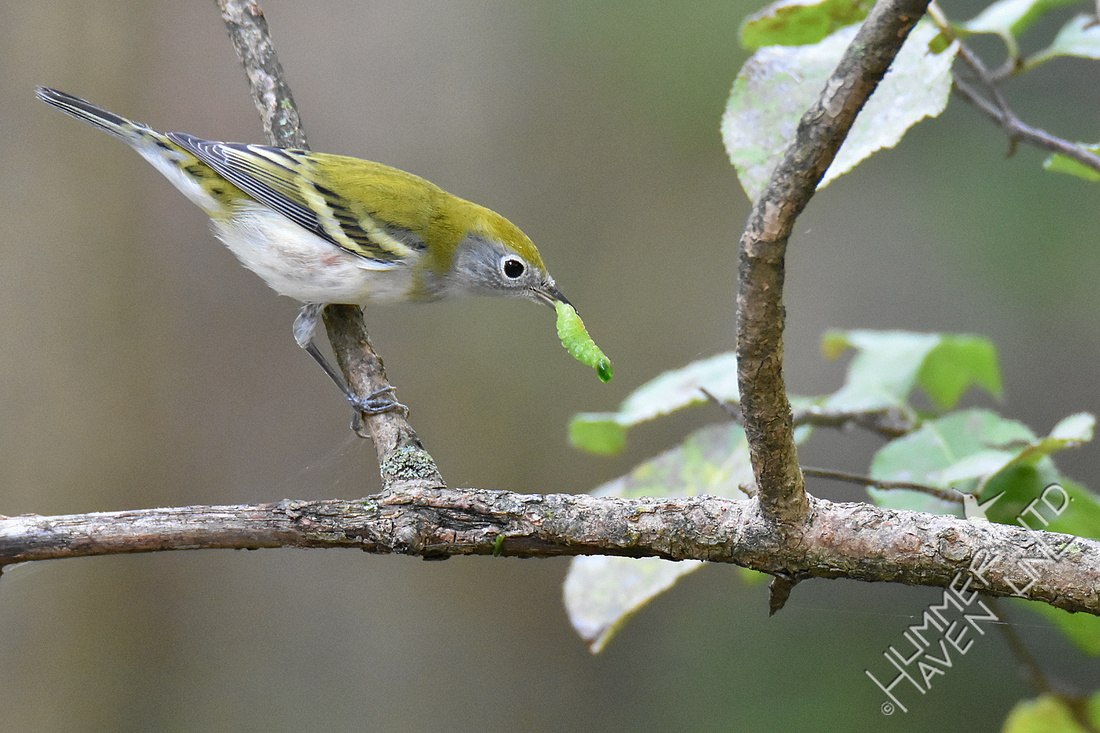 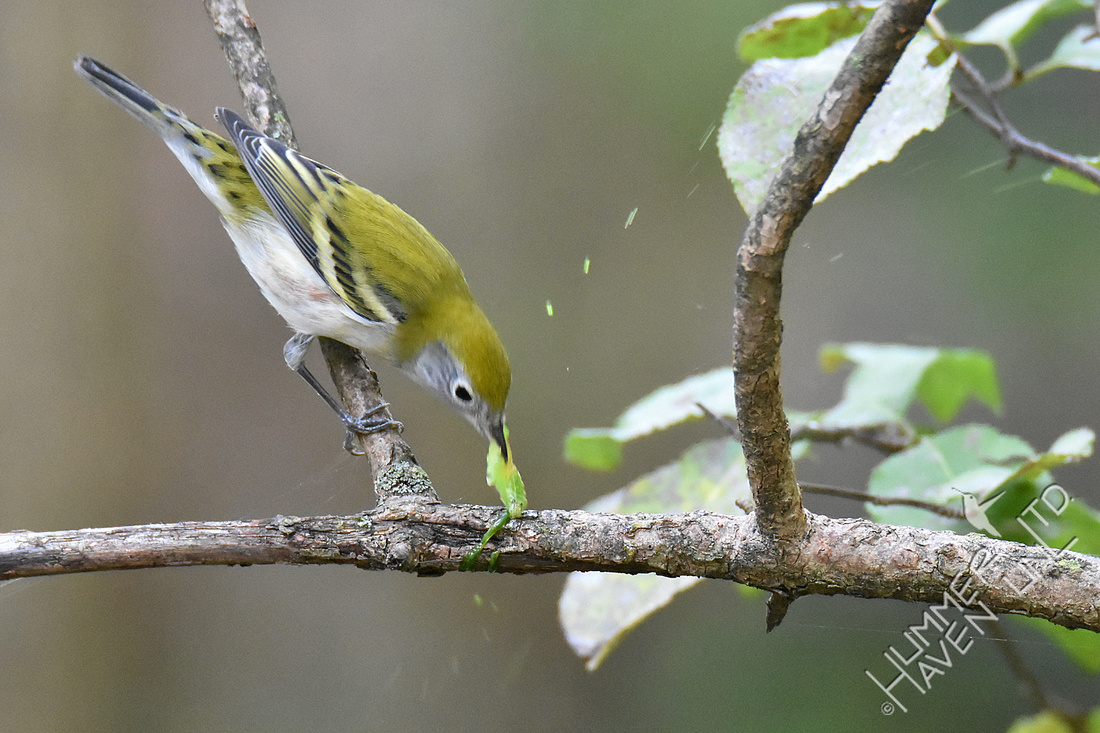 Finally, the meal was prepared to perfection, and... down the hatch! 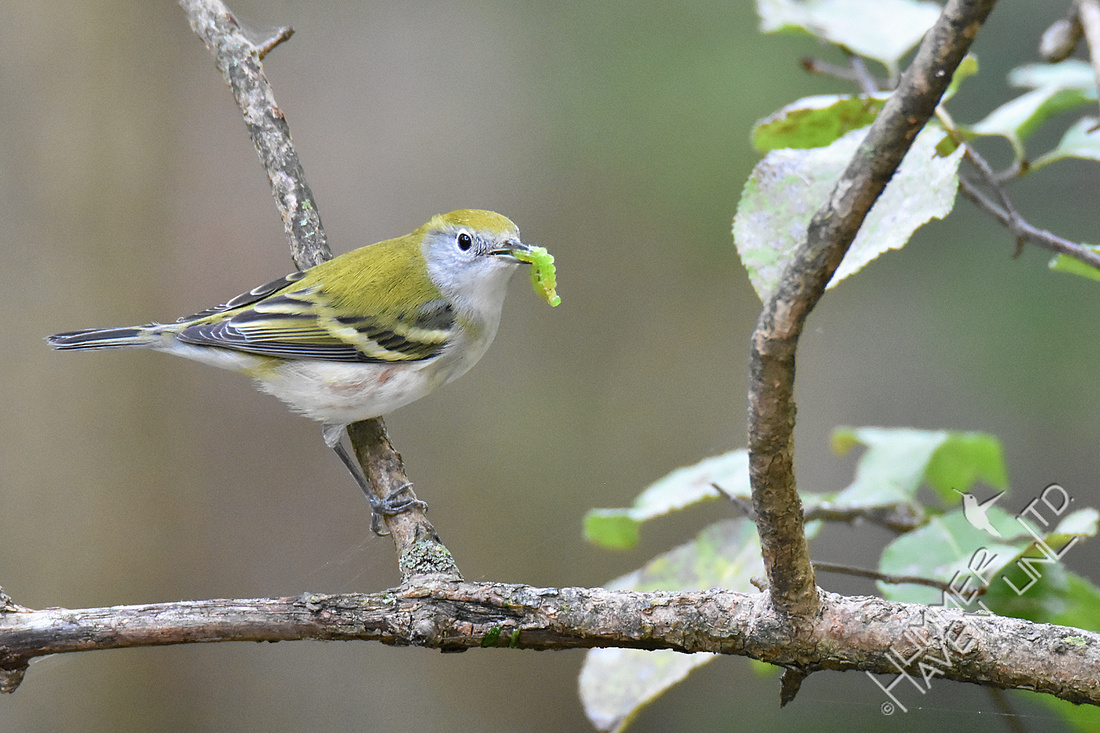 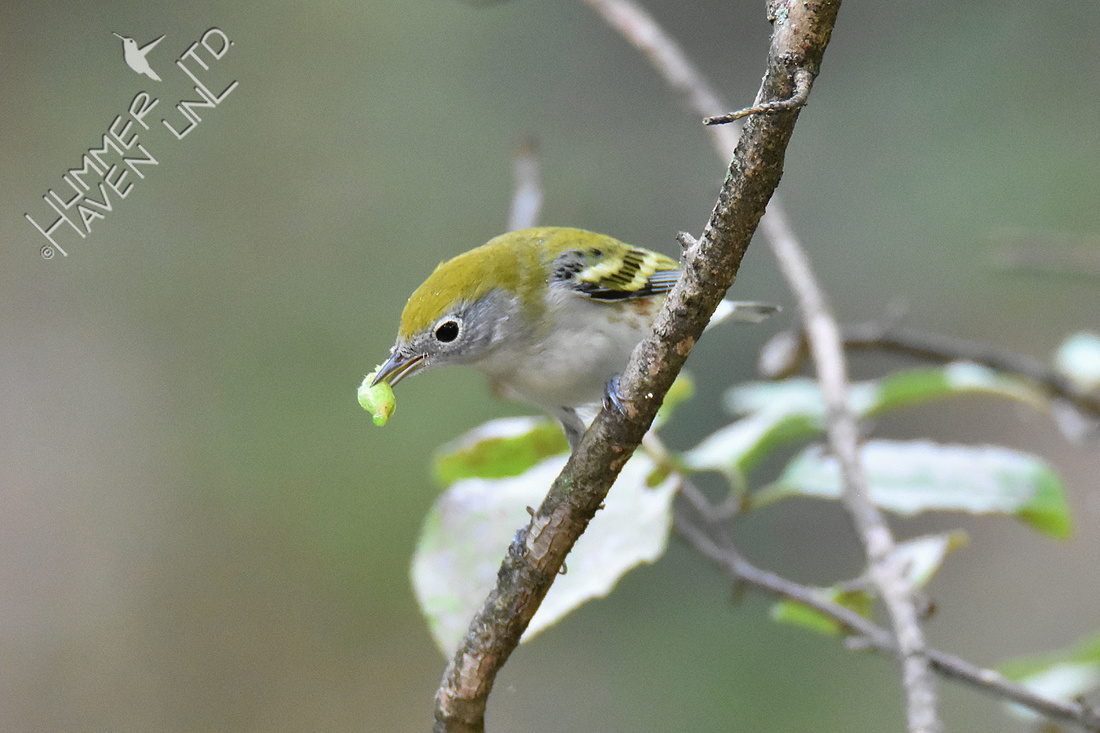 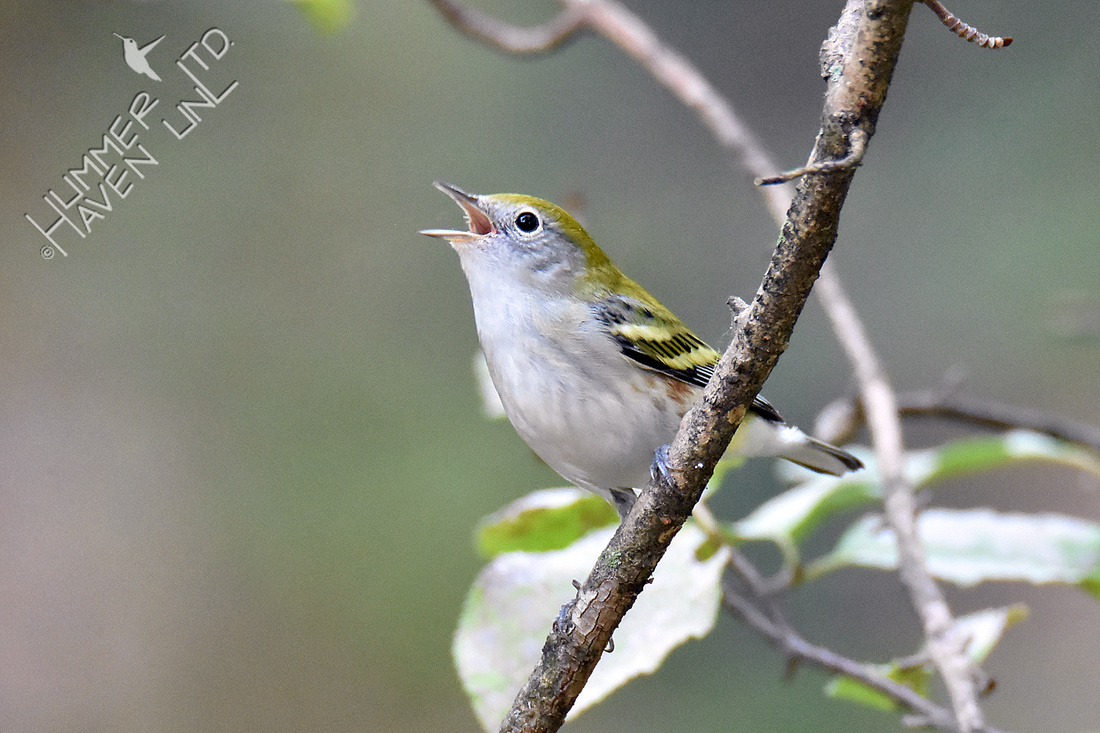 This is exactly the type of foraging and feeding behavior that birds repeat on tree after tree, in all layers of the canopy. I see it all the time, but being able to photograph it in this detail happens rarely. It's a primary goal for me to document this kind of interaction - native birds being sustained by eating native insects on native plants. This is an ecosystem at work! Moth, butterfly and sawfly larvae make up the primary food source for 96% of our native birds.

Water has been attracting a lot of birds this past week. It has been hot with no rain. Thrushes, like these 3 American Robins, often get in the basin together. Having a perching stick across the middle gives them their own space. 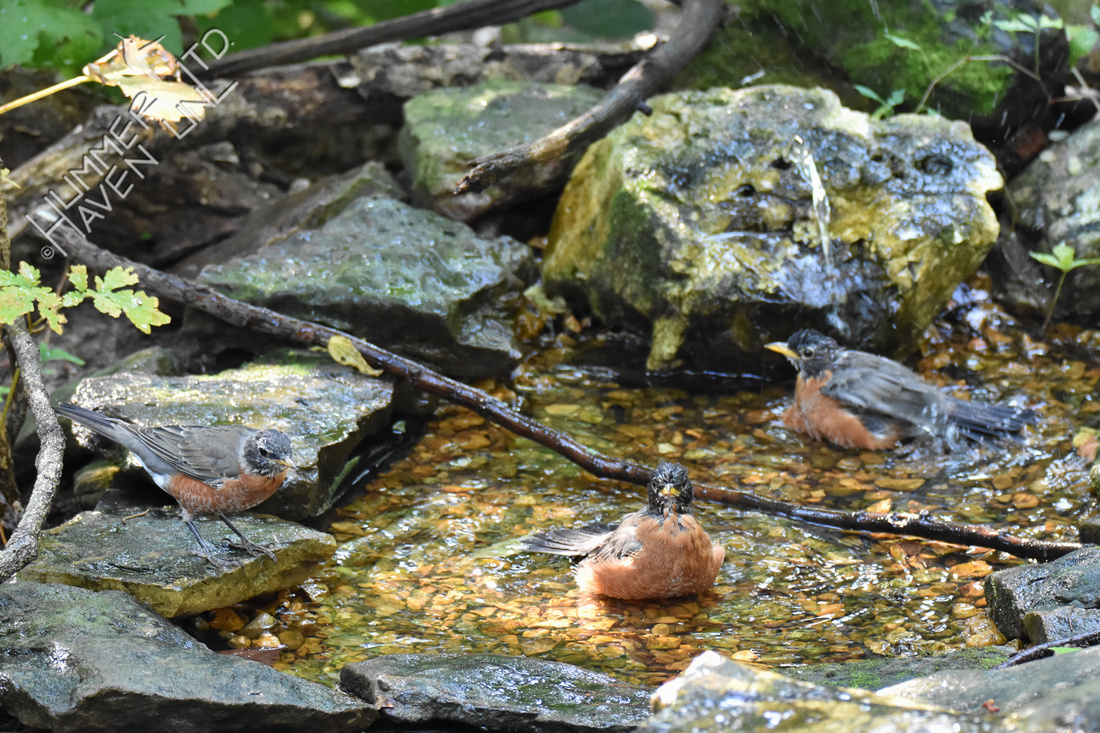 Warblers often show up in mixed flocks and will get in together, too. A Tennessee Warbler was having a good time and the Black-and-white Warbler joined in. An American Redstart followed a Wilson's Warbler into the basin. The redstart returned and ended up getting a shower and bath at the same time! 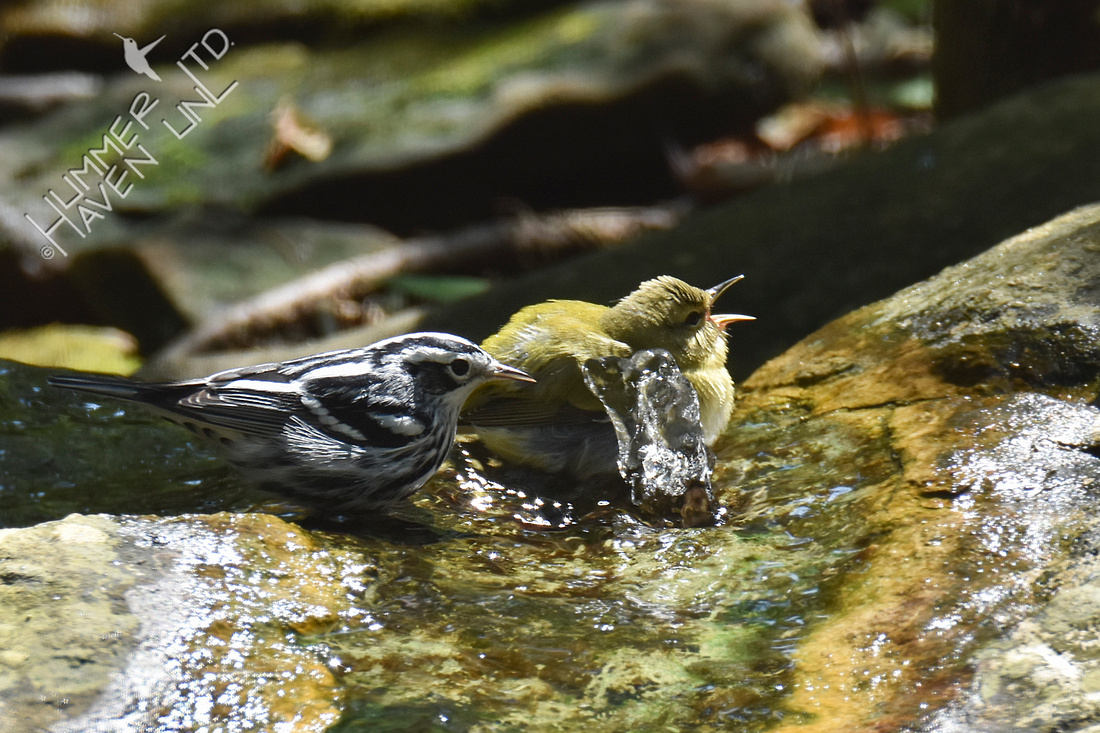 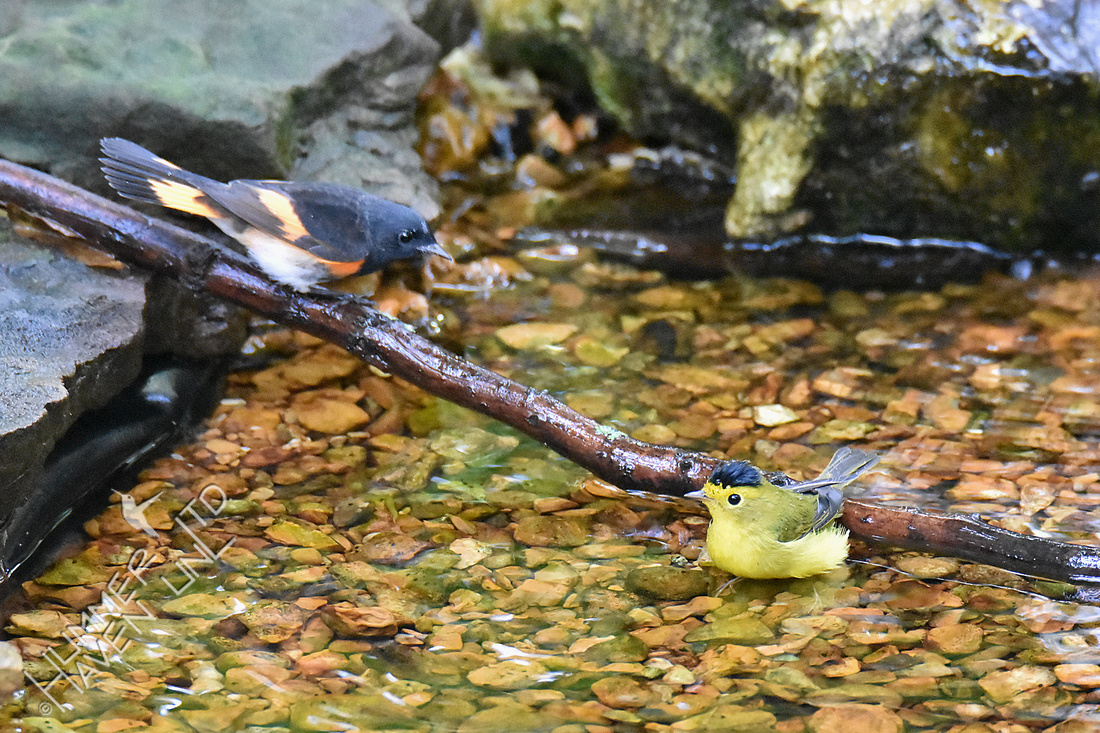 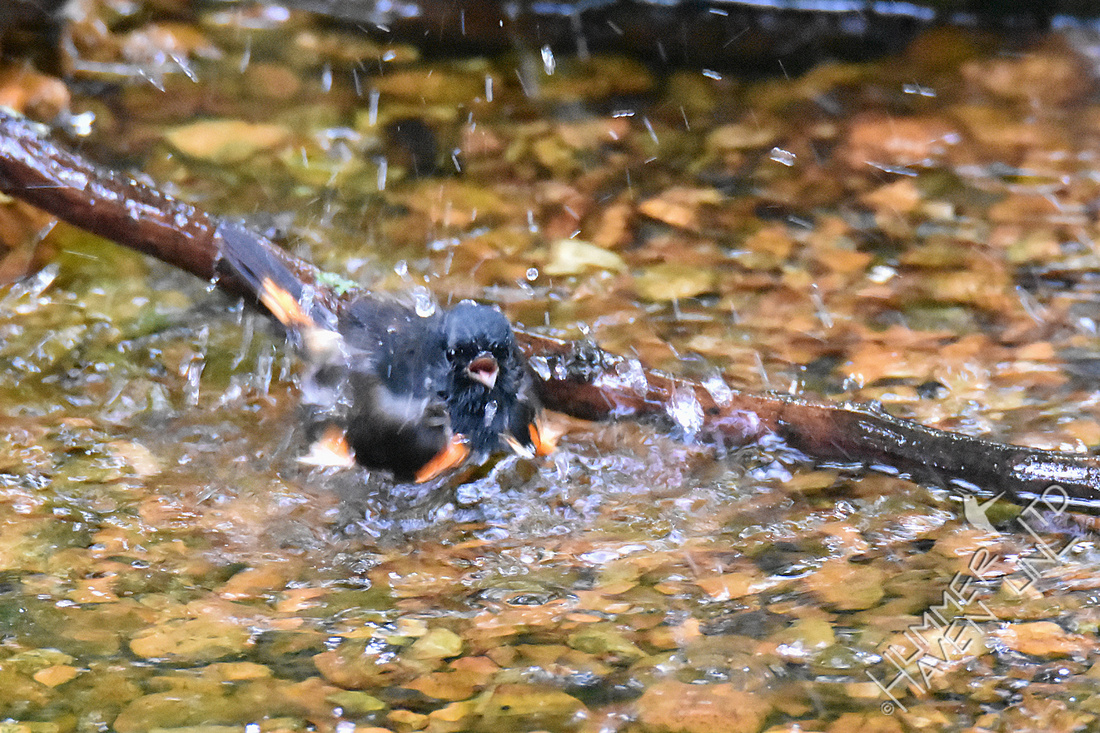 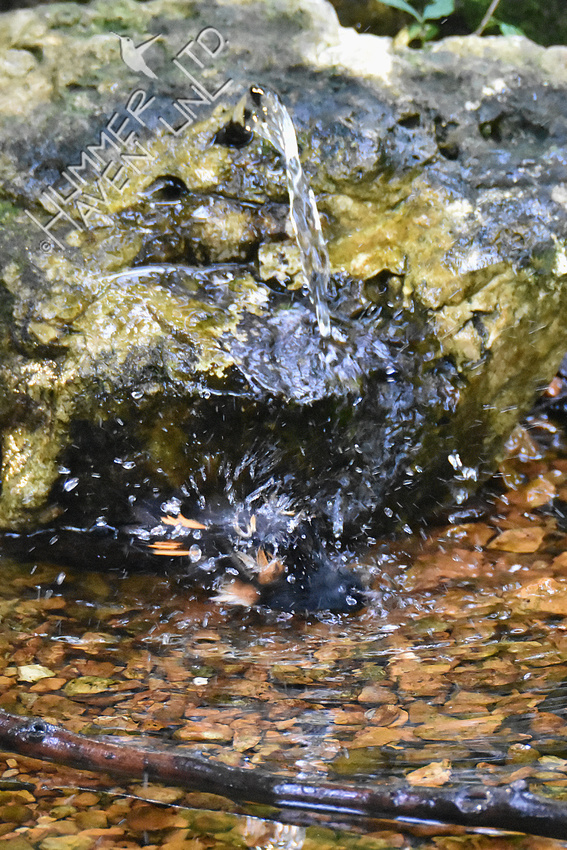 9-17-19 American Redstart getting bath and shower

A new little Northern Cardinal fledgling has been brought to the bubbler area. It was staying in the cover of the hydrangeas and wood-poppies, waiting for its parent to bring food. This happened a few times, and then the little bird decided to try for a drink. 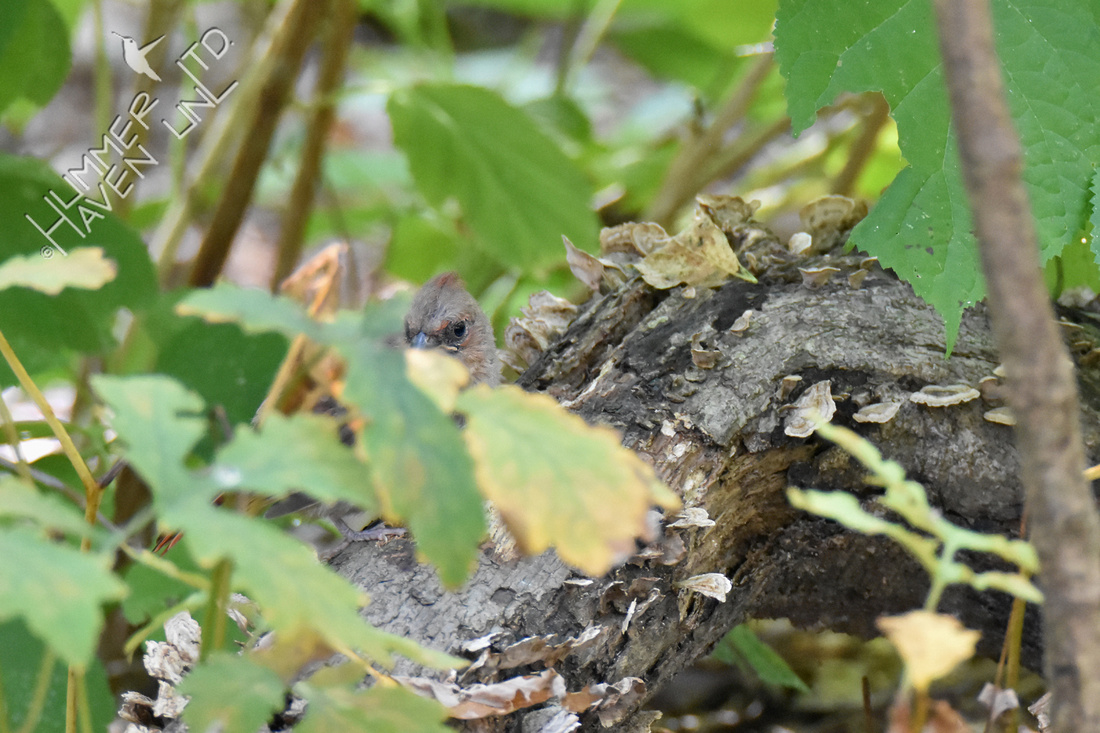 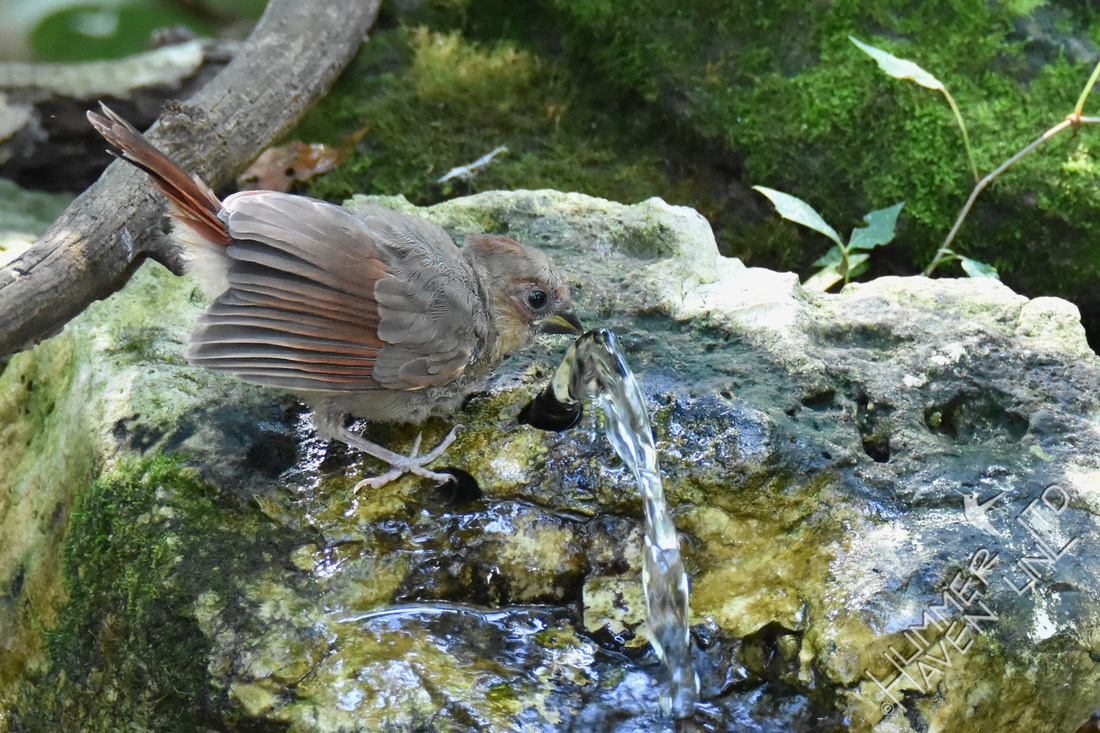 9-18-19 Northern Cardinal Fledgling gets a drink

The birds were back again yesterday. Is this not the cutest little cardinal? Looks like its tail feathers grew overnight. The male brought it several bites of caterpillars. Then, the little guy found a tiny caterpillar to eat in between visits. It won't be long, the bird will be on its own before winter. It took a little nap in the Smooth Hydrangeas (Hydrangea arborescens) before moving to a different area of the woods, "chipping" all the while so the male knew where to find it. 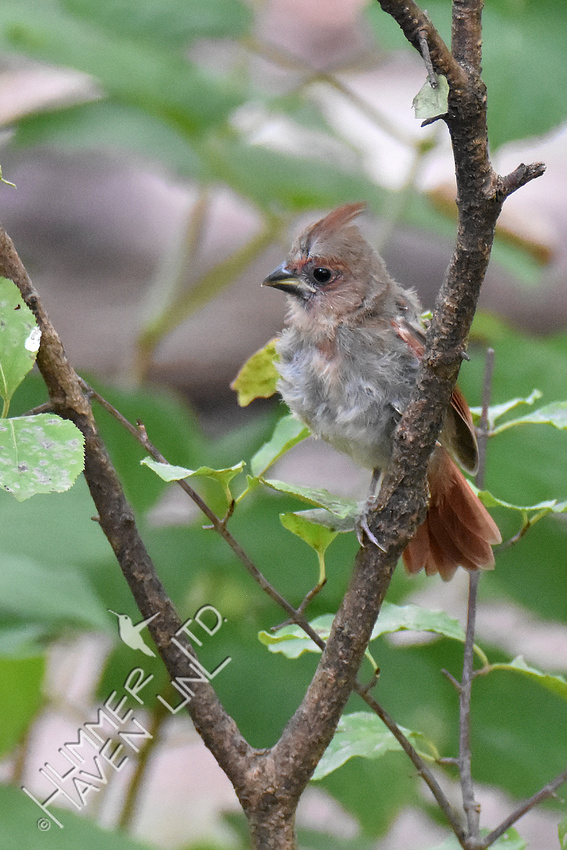 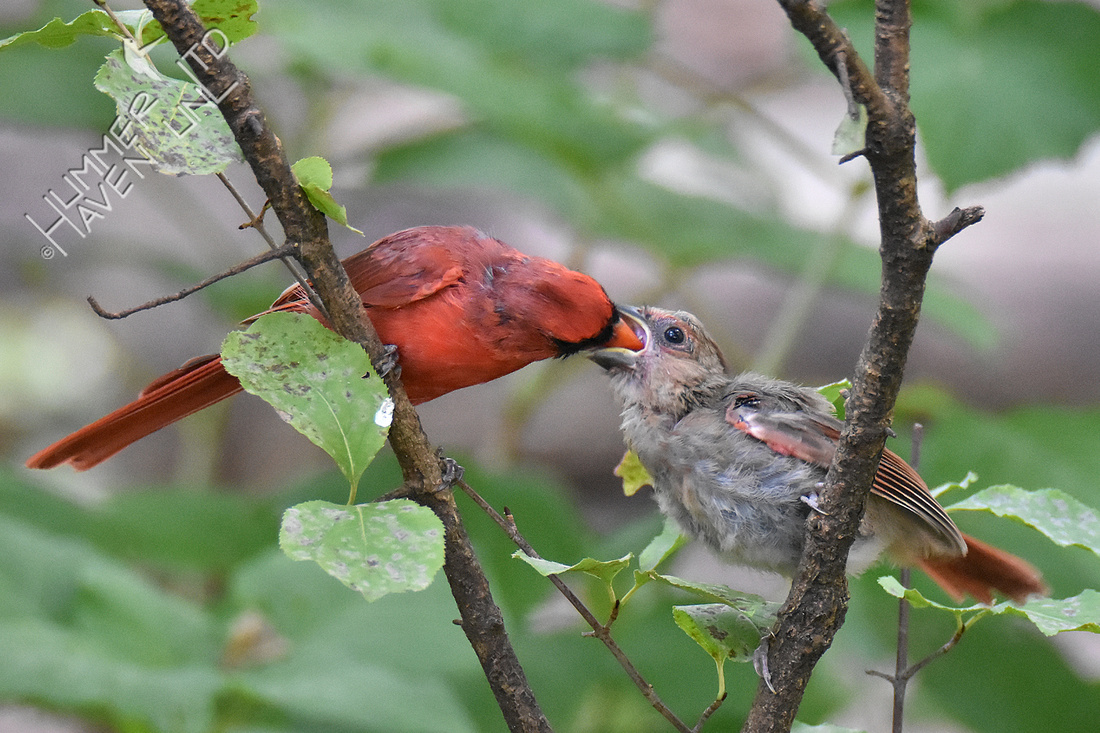 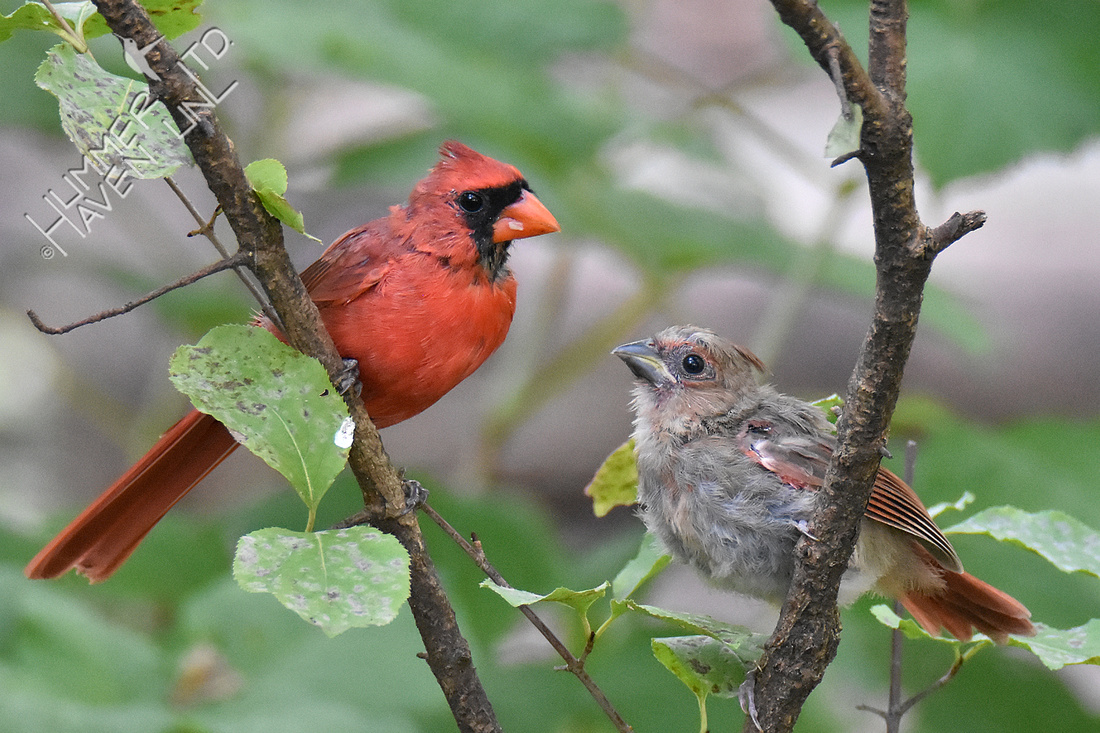 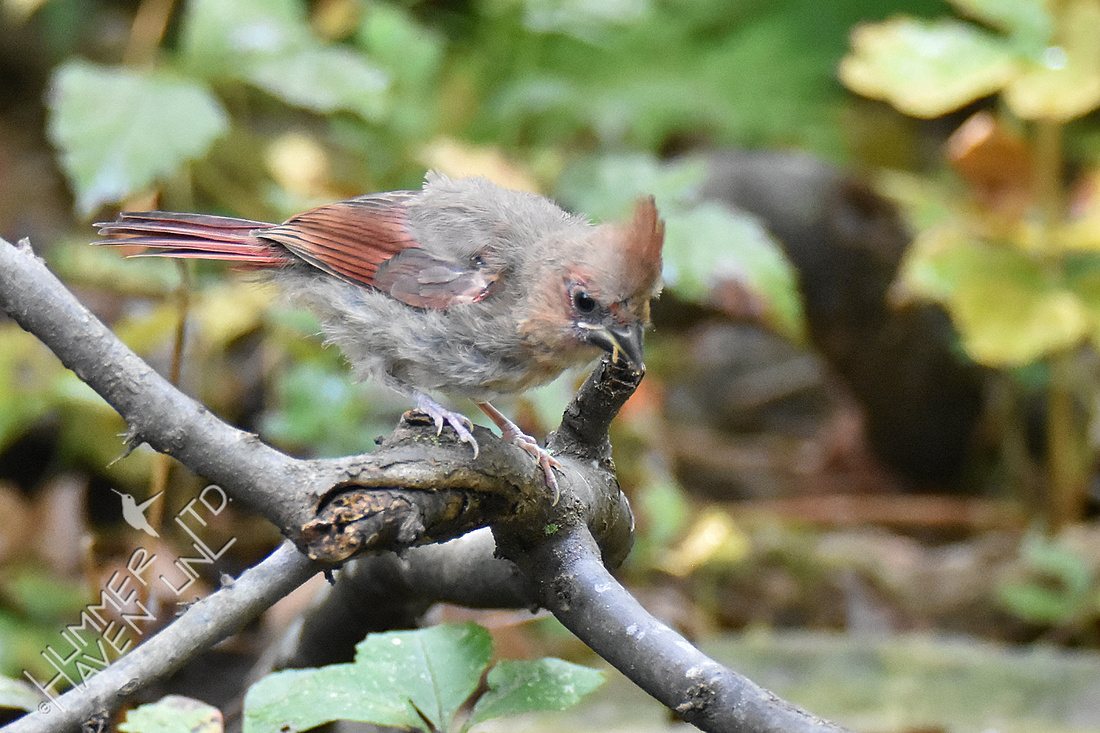 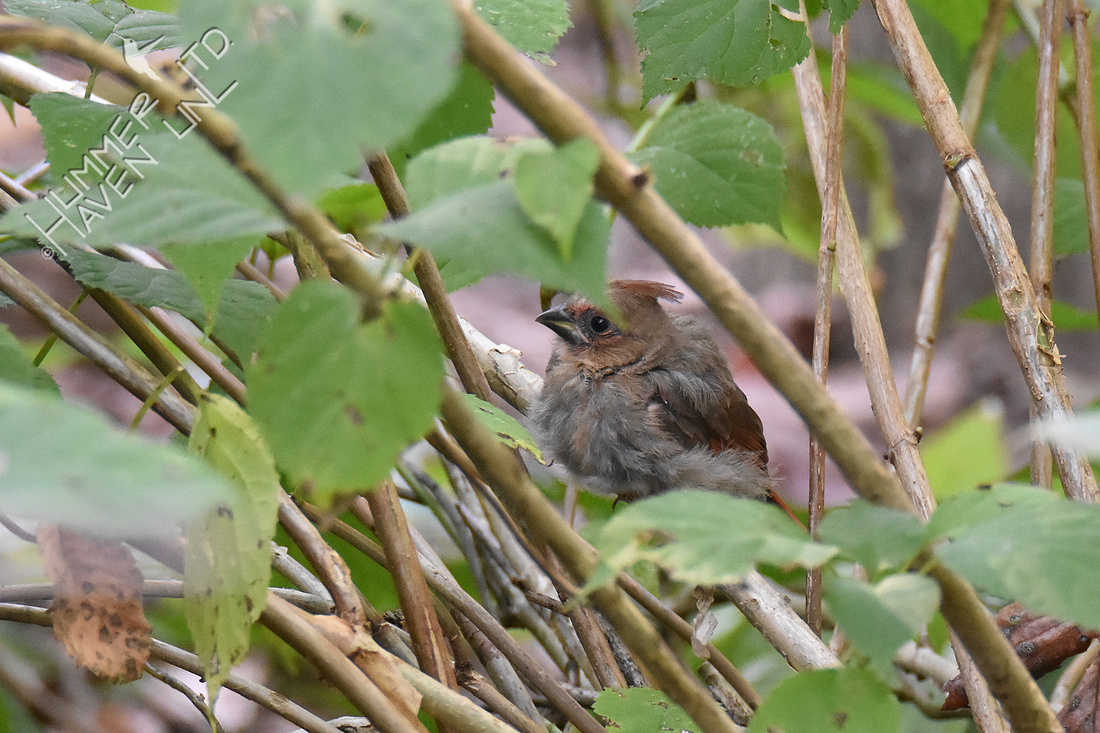 WHAT DO BIRDS NEED?
FOOD, WATER, AND COVER - PLACES TO REST AND NEST

"No native plants, no native insects, no baby birds!"

Some disturbing news today, and 7 ways to turn things around and help our native birds:

As Doug Tallamy says, "Garden as if Life depended on it."

Bring Life into your yard with native plants ~ Conservation actions in our own yards work!

Don't know what to plant? Check out these websites.

If you live in the St. Louis area, for a small fee you can schedule an assessment

Hummer Haven UnLtd.
Hi Geoff,
We have the four Blackhaw (Viburnum prunifolium) around the bubbler, all were saplings that grew after we cleared the honeysuckle out. We also have a cultivar of the Arrowwood (Viburnum dentatum) that birds come to near the pond. You might look them up to see the difference in shape and form before you decide. There are several native viburnums and all will attract insects and birds!
Let me know what you choose. Yes, it’s all about bringing the birds down through the canopy. They need food from many sources.
Margy

Geoff Anderson(non-registered)
So do you guys have a favorite specie of Viburnum out of the ones you have? I've been trying to decide which one(s) to get and I think I have finally cleared out or have started clearing what will be good places for them. I get a decent amount of warblers here, I just need to bring em down from the oak tops haha
No comments posted.
Loading...
Subscribe
RSS
Recent Posts
Sightings and a Snow Day!! 1-28-23 1-15-23 Winter Birds 12-31-22 Shady Oaks Sanctuary Highlights from 2022 December birds 12-15-22 November's swan song 11-30-22 Mid-November already! 11-15-22 October is "ober!" 10-31-22 Mid-October update. 10/19/22 Late September, Part Two on 10-8-22 Late September, Part One on 9-30-22
Keywords
bubbler pond rusty blackbird mink fox Tanager bluebird basin warblers Purple Finch
Archive
January February March April May June July August September October November December
© Hummer Haven UnLtd.
Powered by ZENFOLIO User Agreement
Cancel
Continue