In early May when I was photographing birds daily, I was asked in an email by a former neighbor, "How do you get anything done?????  Aren't you completely distracted in your thinking?????"  I smiled and shared these questions with my dear friend whom I had infected with the birding bug years ago.  These were her responses.

Answer to question 1:   Who cares?

We shared a good laugh.  Well, the piper must now be paid and days spent waiting for intermittent migrants, visiting family, reading Owl Babies to our blue-eyed boys and being otherwise engaged have turned to days spent working in the garden.  So, I am birding with my head down early in the mornings and hearing many of the nesting birds. They are not as vocal as when they were setting up their territories, but still call a bit in between forays of finding food.

On Tuesday, 6/2/17 we dug up a small beautyberry and moved it to another spot. This left a depression in the soil behind the bench in the garden. A couple days later, I was in the gazebo eating lunch when the Brown Thrasher family flew down into the garden.  There were four birds and they took turns dust-bathing in the area where the small plant had been.  I enjoyed seeing them, having not heard much at all from the male since mid-May.  The male then called to gather his brood and they flew off together up into the neighbor's oak trees. It was still a bit bittersweet not to get a photo of that kind of interaction.  In fact, I've gotten very few photos of that species.  The last time was in 2006!  So, perhaps one can use his or her imagination and put these two images together. 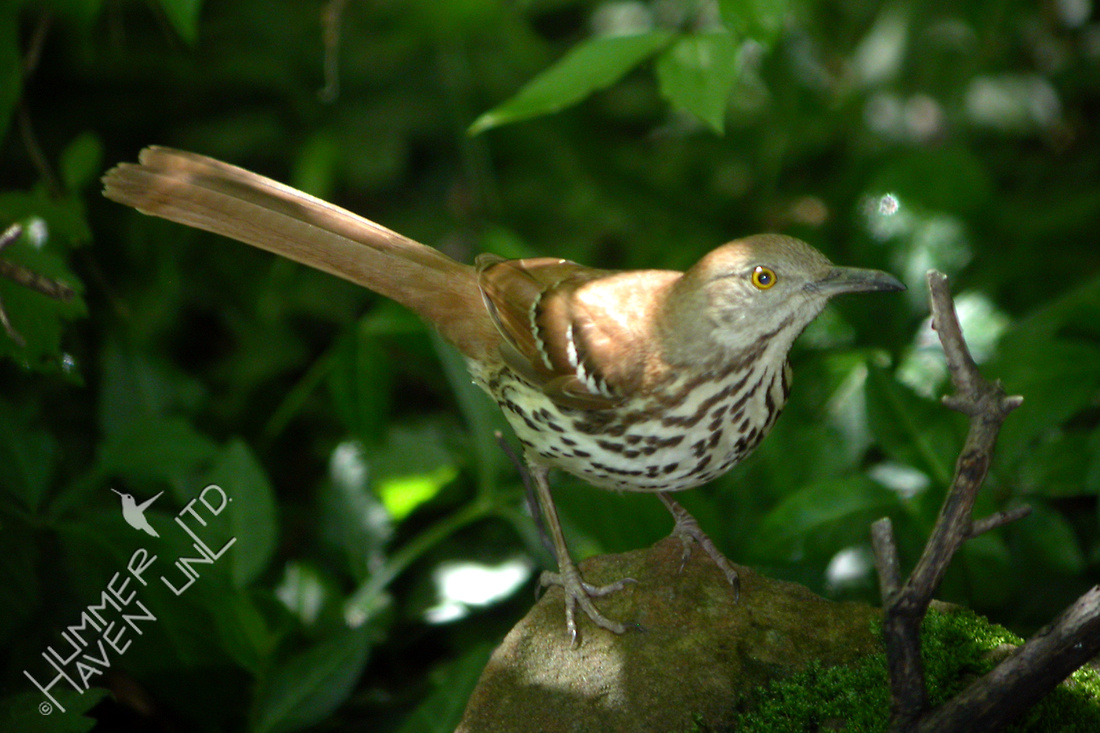 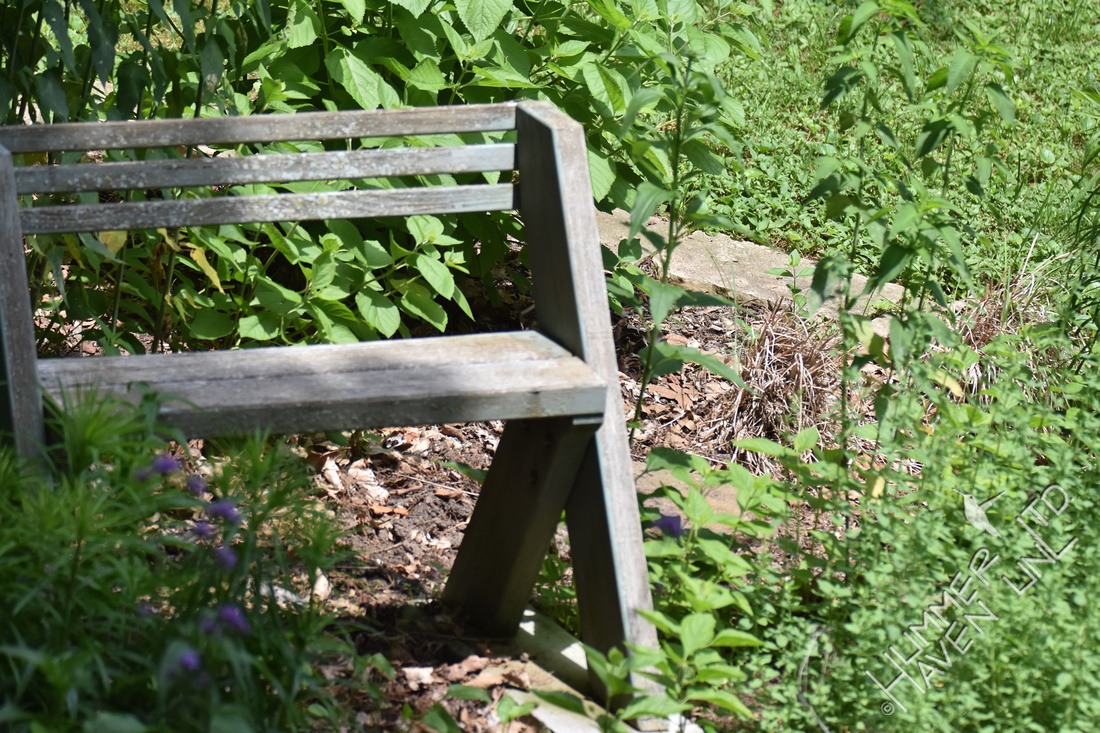 Or not.  I know, it's just not the same.  A wise instructor once told me, "Well, you may not see that again, but you will see other things!"  As luck would have it, I had just taken the bench photo when to my delight, a bird popped up from the garden.  It was another nester, a Great Crested Flycatcher! 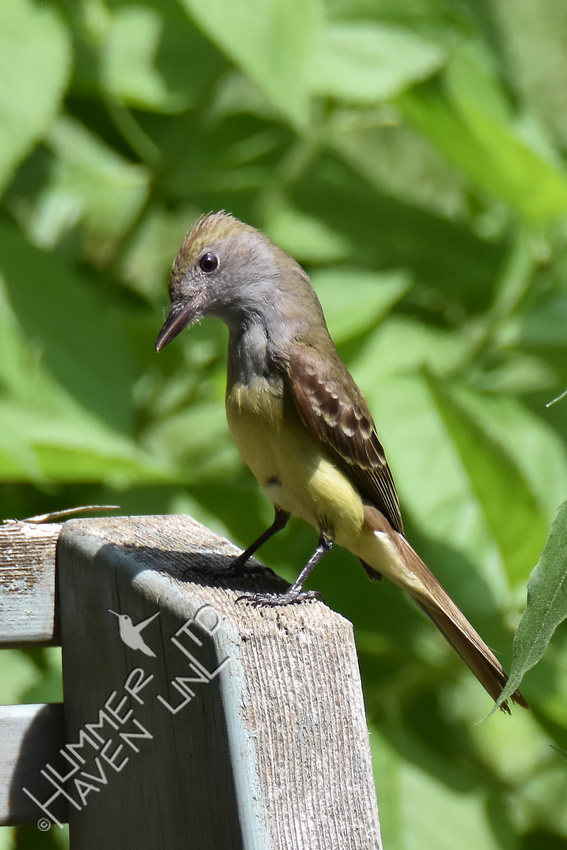 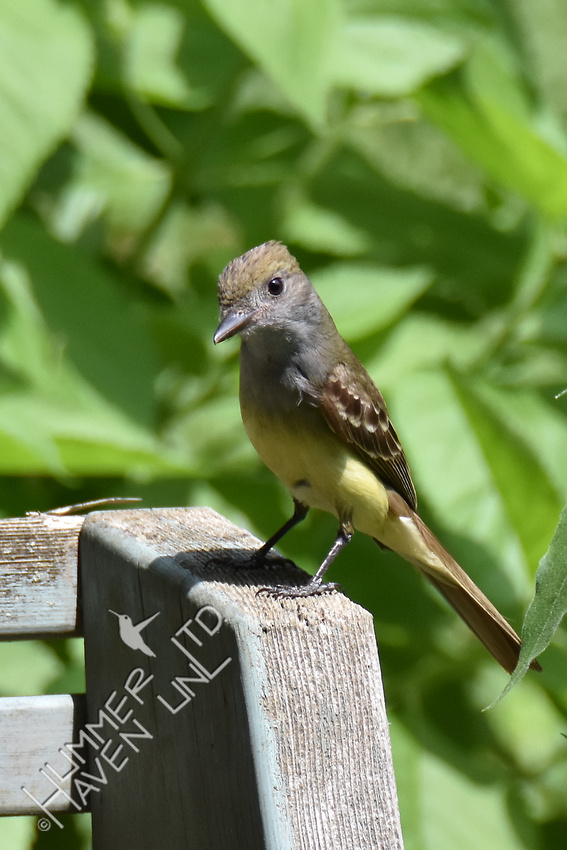 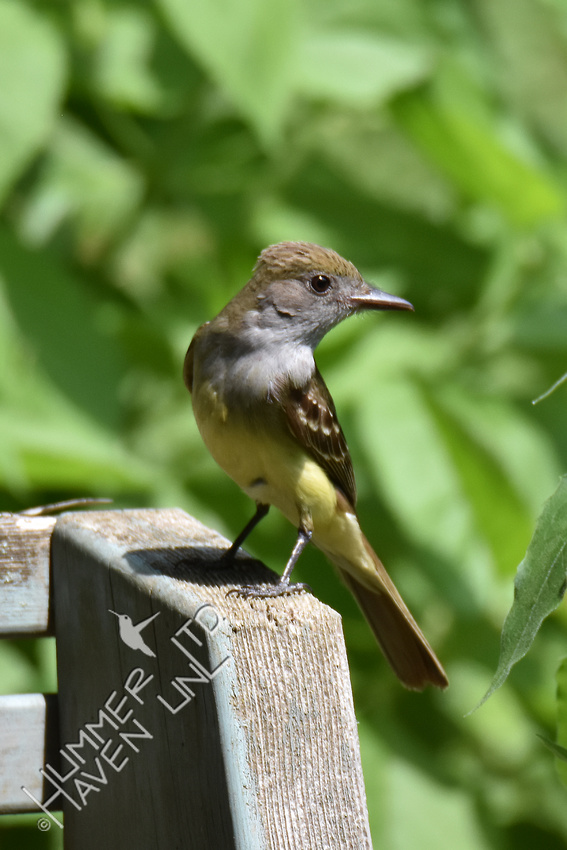 This species is usually found at the top of a tree calling, "Breeep, breeep, breeep!"  I didn't expect to see this one foraging so low, but insects are found in every level of the canopy.  I saw the bird again yesterday perched on the arbor and flying out and back catching insects.  They have such beautiful and distinctive coloration, don't they?

There have been other opportunities in the last week to document nesters in friends' yards.  I visited the first nest on Wednesday, 6/7/17.  It is a Ruby-throated Hummingbird nest that is located just above eye level in a young Bur Oak (Quercus macrocarpa).  The nest is spun with spider silk to stretch with growing chicks and camouflaged with bits of lichen.  "The details of life are exquisite!"  Have you found it?  Look closely at the images to see the spider silk. 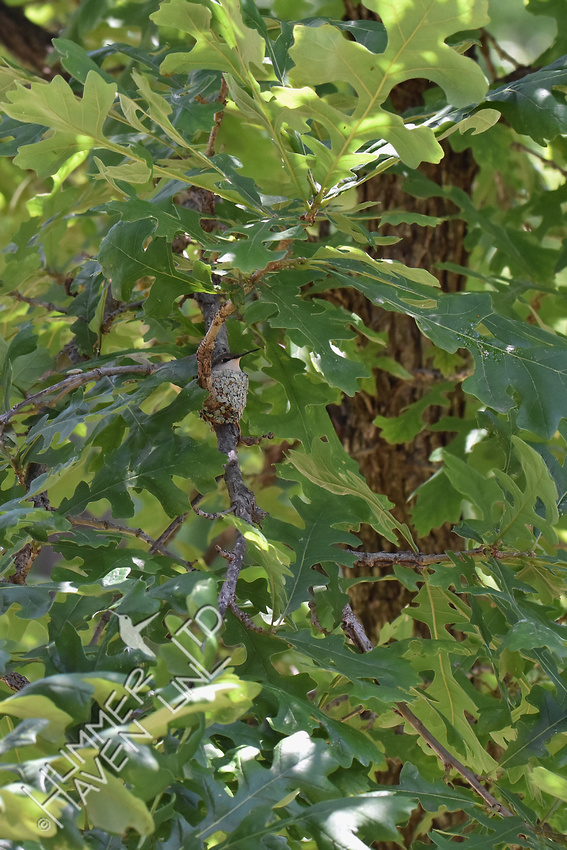 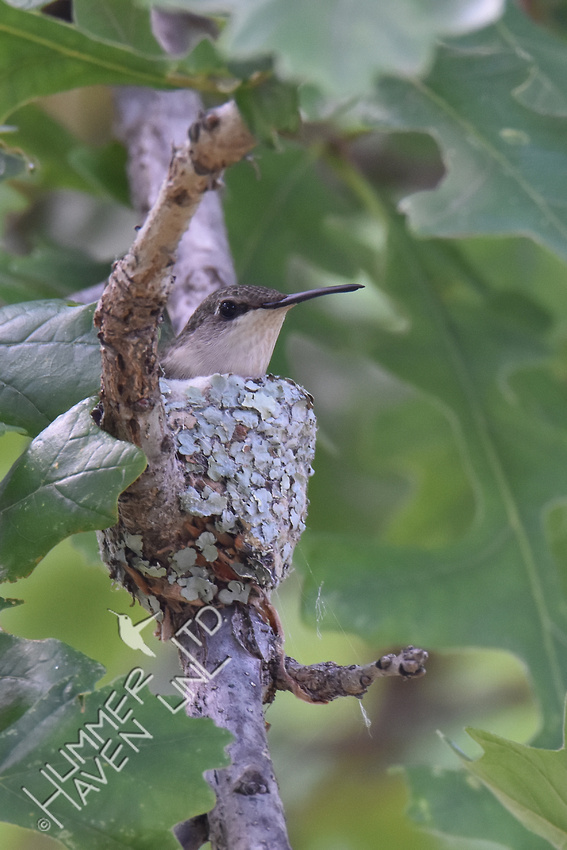 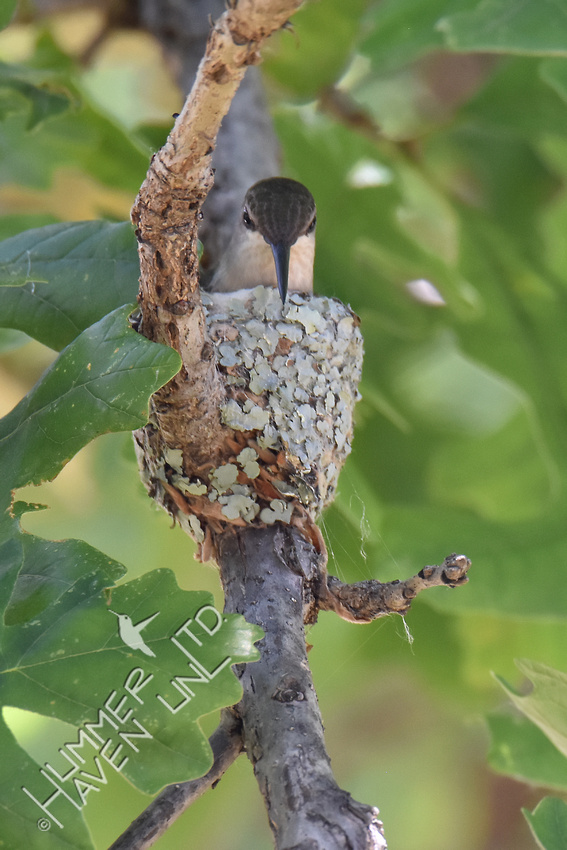 We're not sure when the bird laid eggs, but as of Monday 6/12/17, it had begun feeding two chicks. So, I went back today and despite the wind and a noisy garbage truck coming down the street as the female came in, I was able to get some images of her feeding the babes. This period of the nestling phase will last an average of 18-23 days, and up to another week longer. 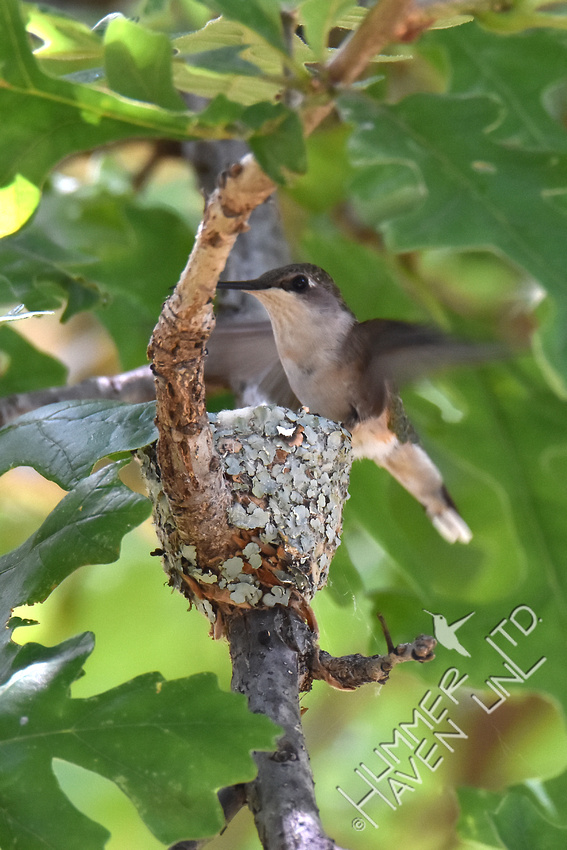 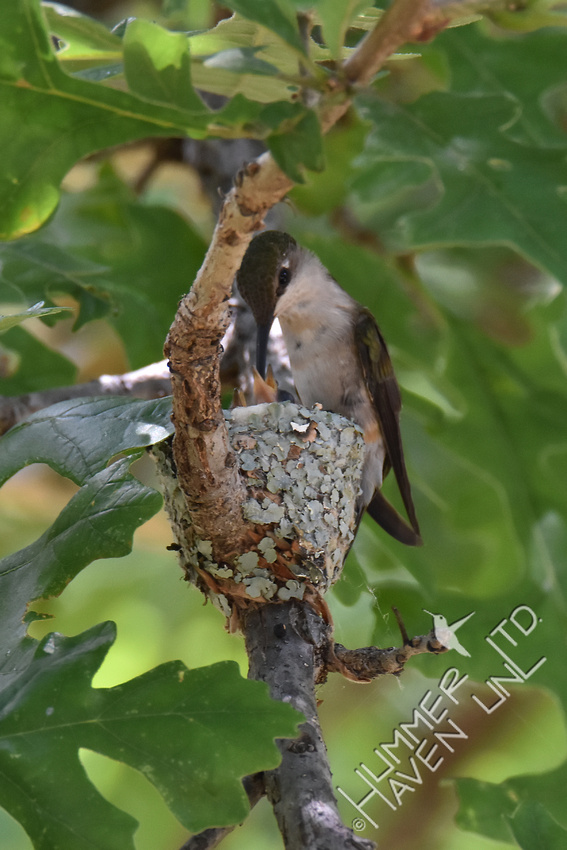 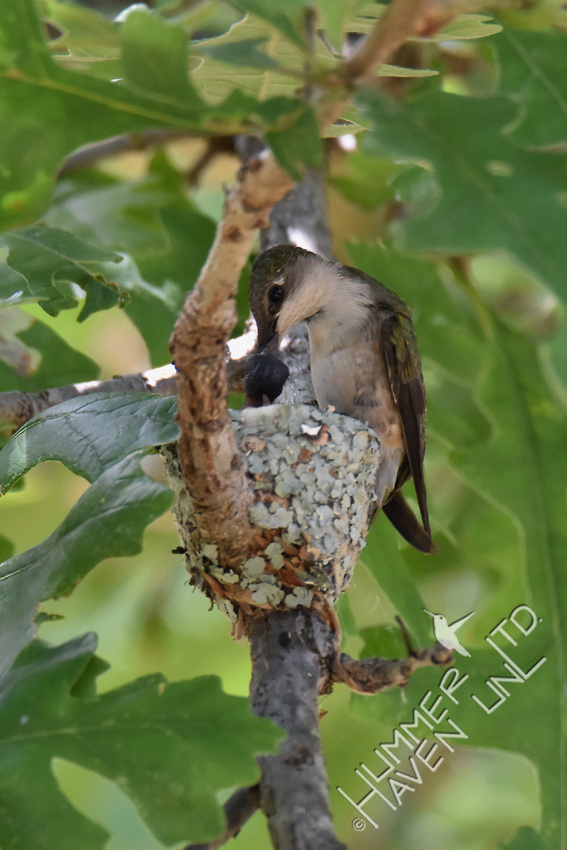 I am very grateful to these folks for allowing me to witness this natural event and photograph the birds.  Though we have 3 females coming in regularly to feed in our yard, they fly off in different directions and I have not located a nest closer by.  I will be checking on these chicks as they continue to grow.

Open a new tab by clicking here to learn more about the bird and its nesting habits:  Ruby-throated Hummingbird

As soon as I got home after getting those initial photos last week, a second friend called to give me the particulars of the Red-shouldered Hawks' nest he could see from his deck.  I went the next morning.  The nest was in the largest crotch of an American Sycamore (Platanus occidentalis).  These hawks prefer nesting near a water source and this tree was situated along the bank of a creek. 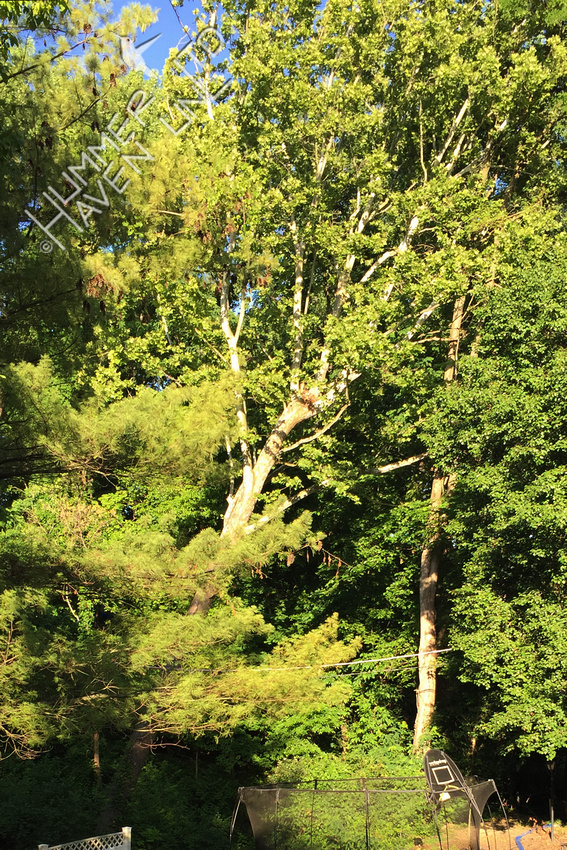 The three young hawks were just days from fledging and leaving the nest.  One of the adults (its wing seen on the left side of the tree) brought in a small mammal for them to eat. 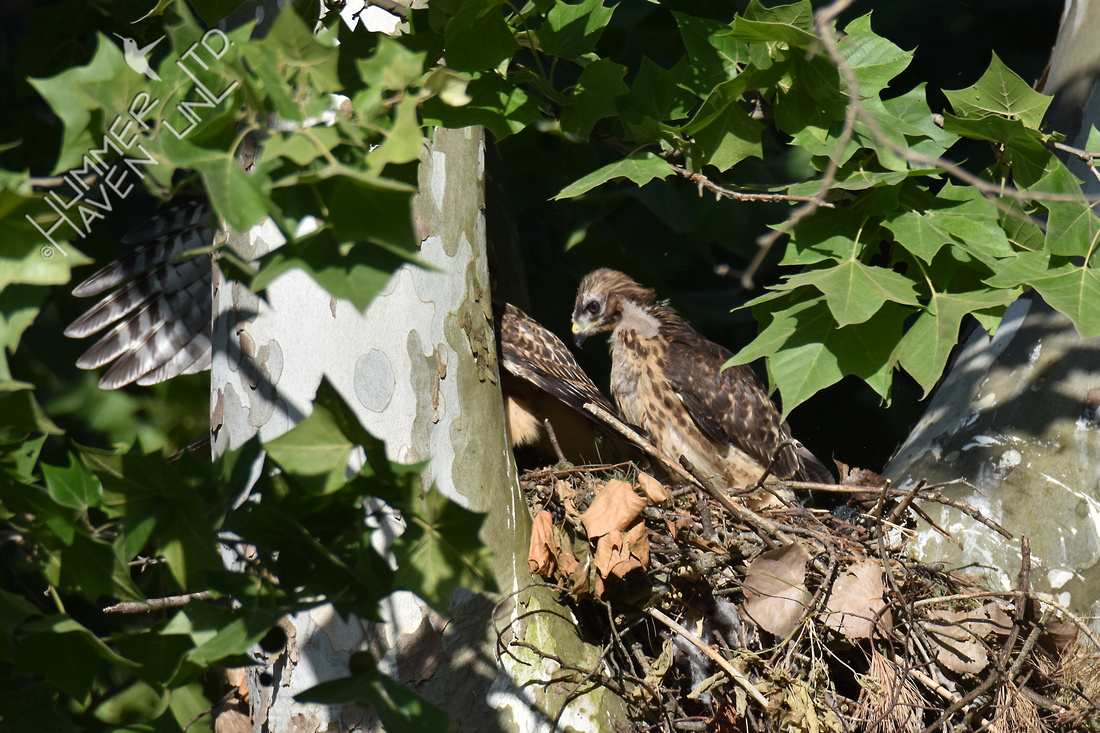 Studying the photos, I could confirm that the prey was a Short-tailed Shrew, smaller than a mouse.  The young bird seemed pretty cautious about handling it. 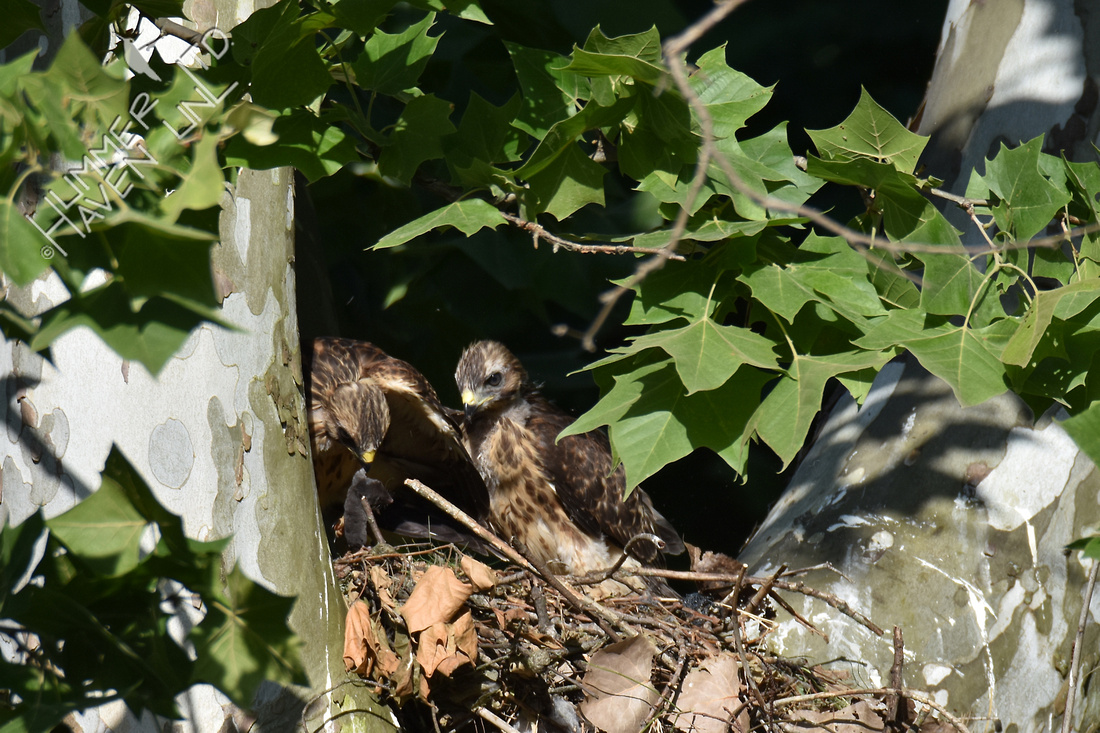 The two young birds seemed to be waiting for it to stop moving before getting into their meal. 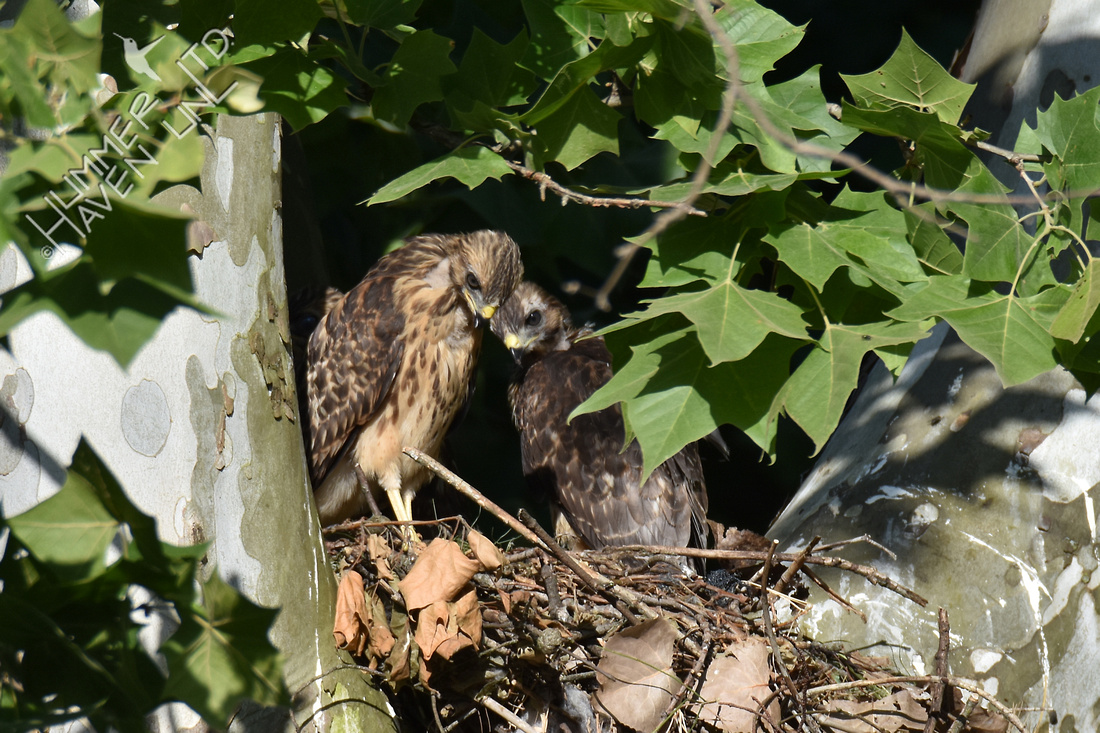 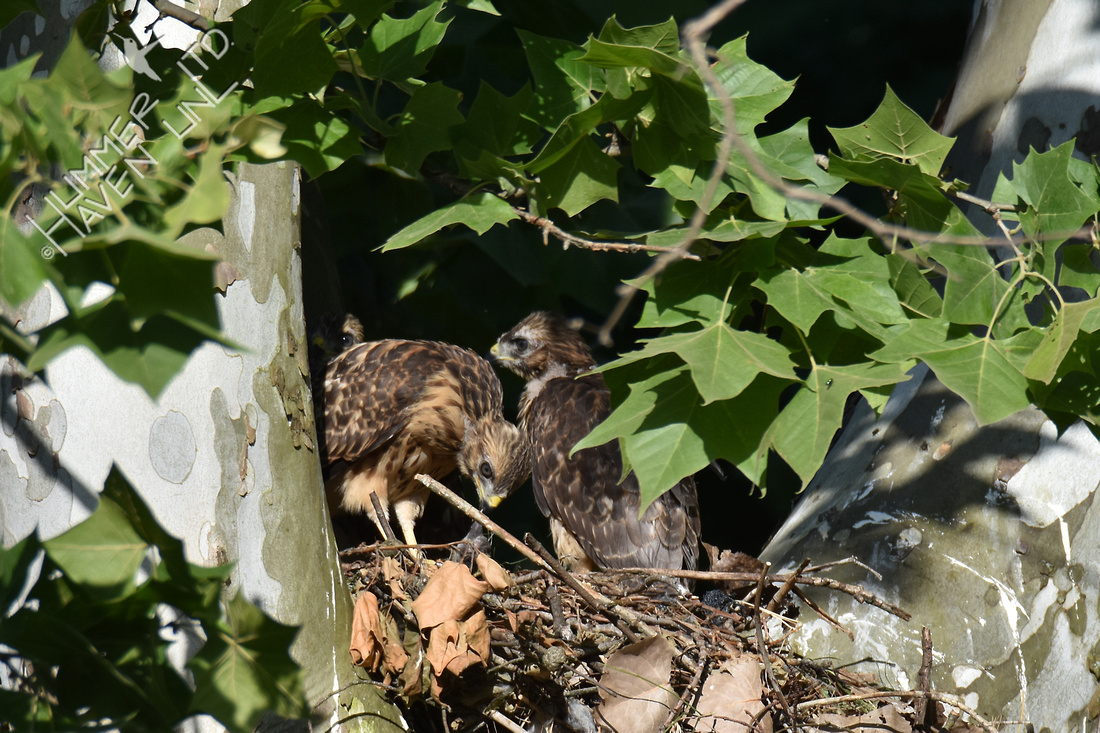 After a bit of research, i learned that the Short-tailed Shrew is the only mammal in North America with a poisonous bite! Perhaps that is why the young birds were a bit reticent.

Read more about the shrew and watch a National Geographic video at this link:

Here's the link with interesting details about the hawks:  Red-shouldered Hawk

One last thing, the Sustainable Backyard Tour was last Sunday.  I visited several gardens and always enjoy seeing the creative ways that people garden with native plants to help birds and pollinators, as well as re-use and re-cycle different things into fun yard art.  Here are a few examples.

A two-acre prairie of native plants established in 1999. 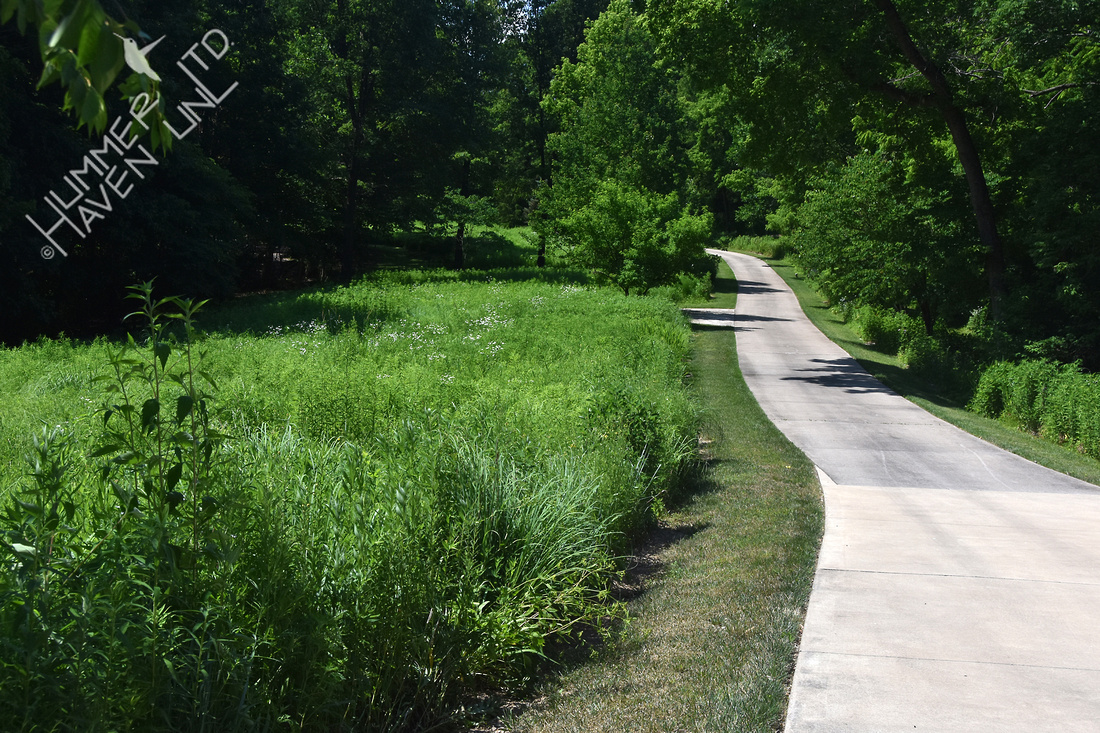 Happy and productive bees return to their hives after work in the prairie garden. 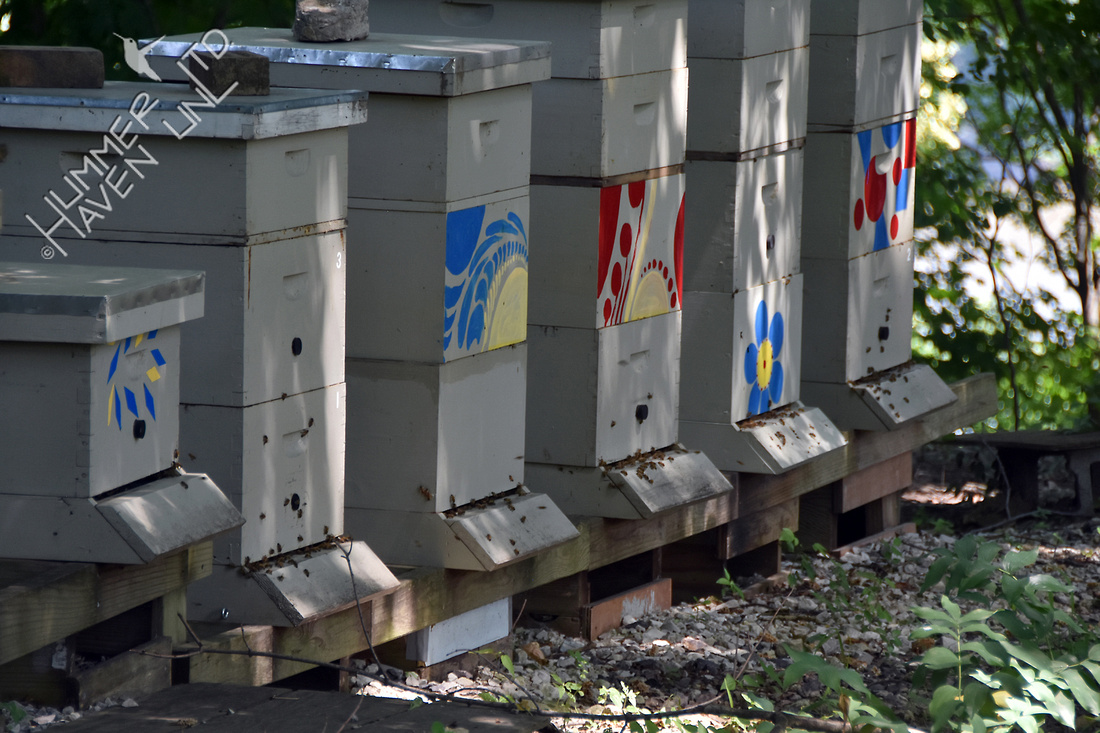 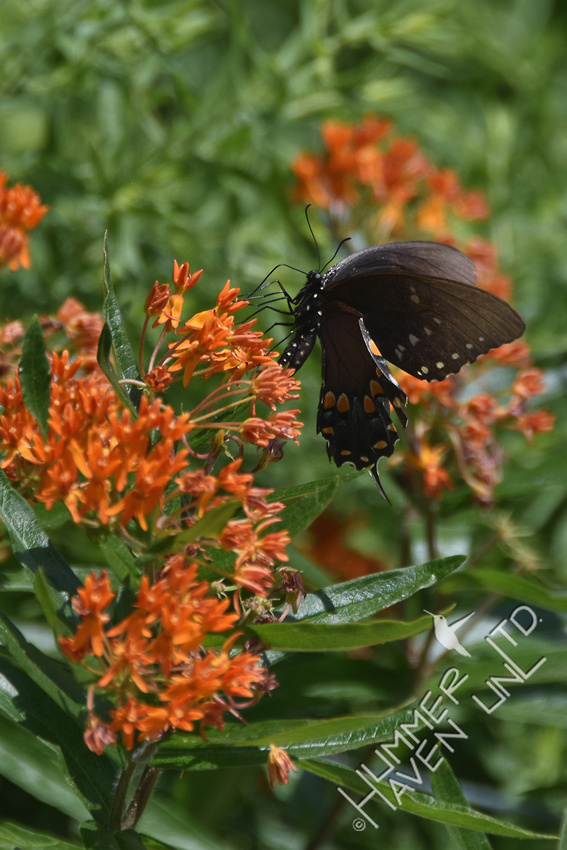 Driftwood that has all been cut by beavers near the Missouri River was collected and painted by the gardener-artist in another native garden. 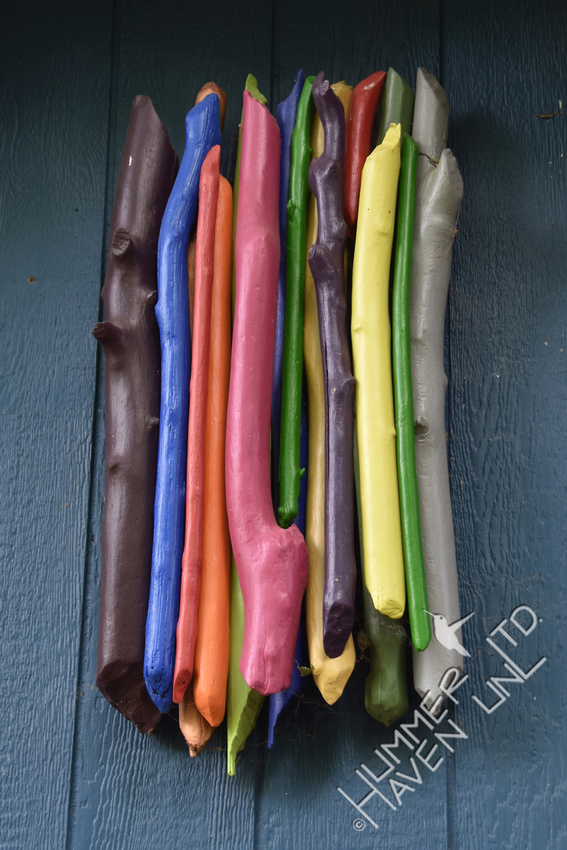 A galvanized re-cycled boy was found climbing a tree! 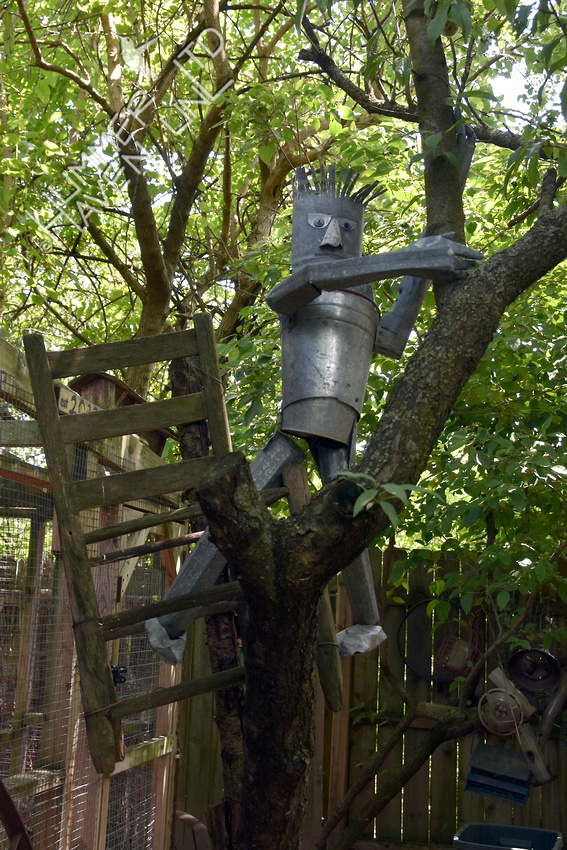 Rain and a cool down is in the forecast and it can't come soon enough for me!