Last fall, I received a request from Wild Bird Rehabilitation through my friend, Lynne Breakstone, to use one of my photos for their Holiday Card. They help so many birds, I said, "Of course! It would be an honor to help them." Last year they treated over 2,000 songbirds!

Read more about all that they do and how you can help them on their website:

Lynne had been to our yard several times and knew that we had a very bird-friendly environment. We had also collaborated with Lynne on other educational projects for WBR. Lynne was able to get the approval to have a rehabbed bird released here in our Shady Oaks habitat. Wow, I thought that would be quite an exciting win-win for all!

On 9-24-15, I got the call. Joan, an experienced volunteer who specializes in finding the right homes for the birds, would bring the bird about 9:30 in the morning. She arrived and brought the bird down near the woods in its covered cage. Gosh, as soon as she opened the wire door, the little Northern cardinal bolted out of the cage so fast that I didn't get a photo! I was somewhat disappointed. But, I did get a good look at it, saw Joan off and thought I would get back to my post behind the camera to see what might happen.

"Sweetie", as Joan called the bird, had been used to being fed by the volunteers at WBR and then had graduated to the aviary before its release here. However, as I watched it, it came in close and perched in a blackhaw viburnum, making loud chip calls that got my attention. There was no doubt in my mind that this was the bird with its bright red topknot/crest. 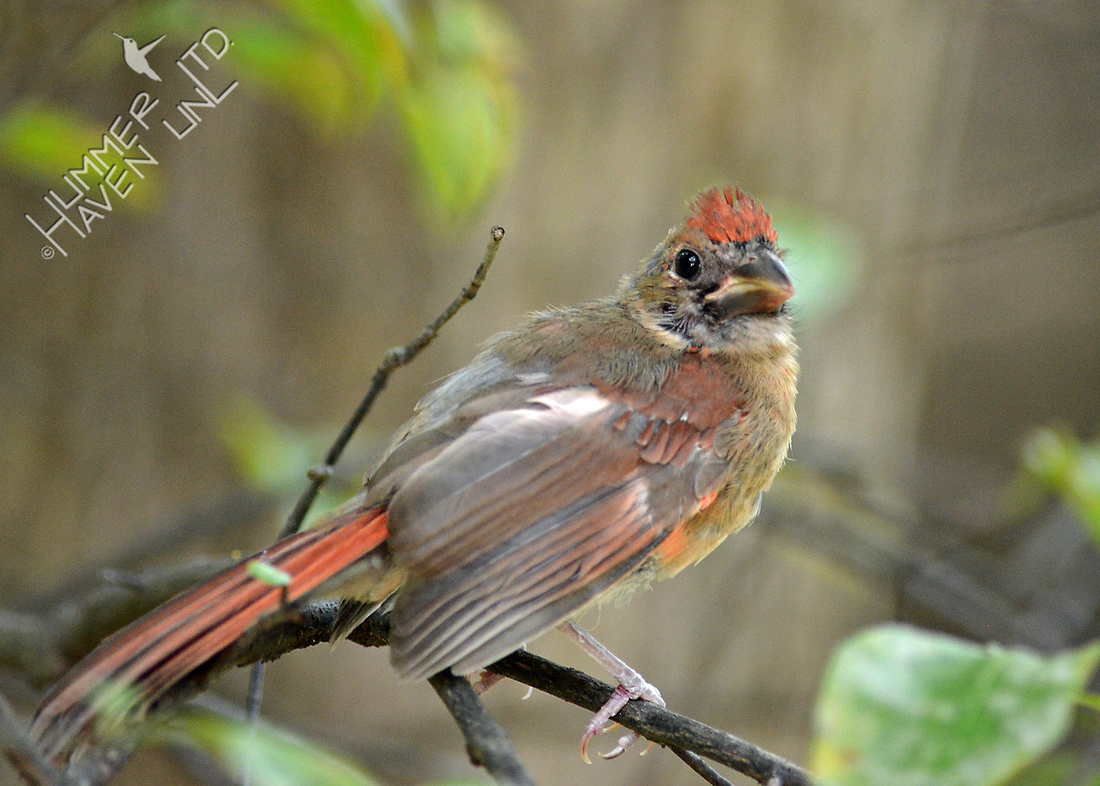 The cardinal spent the next few weeks getting acclimated. It found the bubbler and would get a drink or take a wee bath. Sometimes other cardinals chased it, but it soon held its own, finding small insects and seeds to eat. 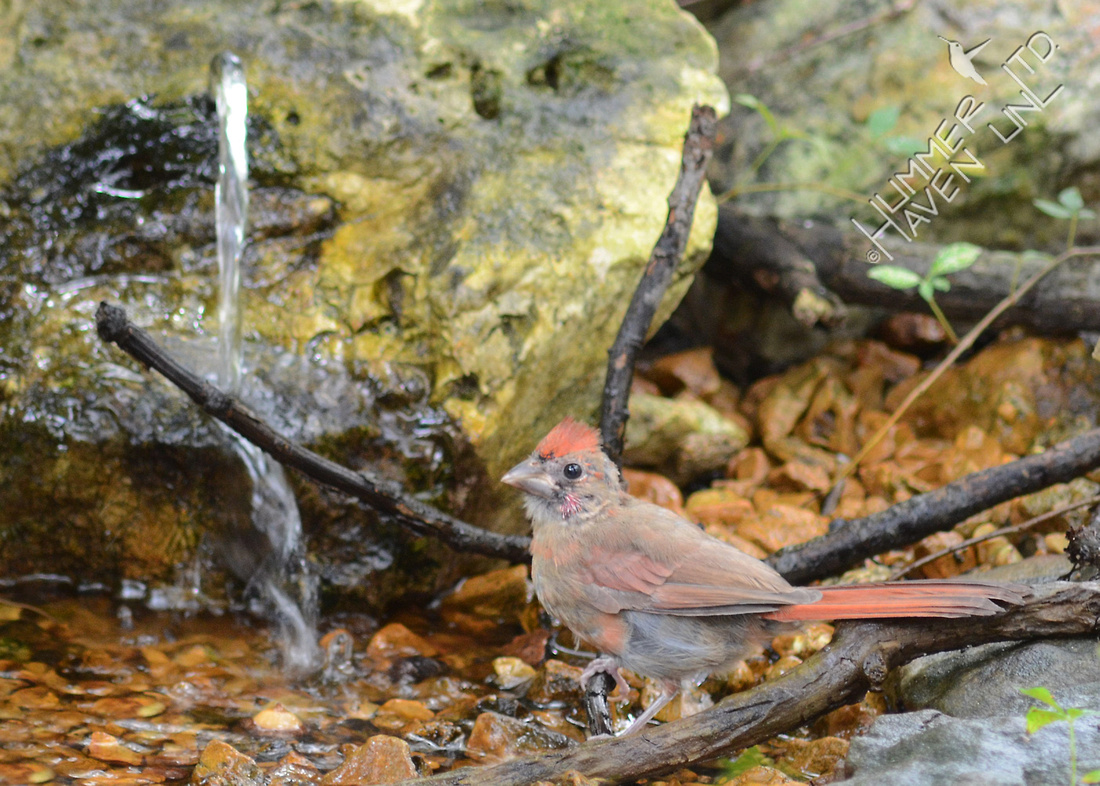 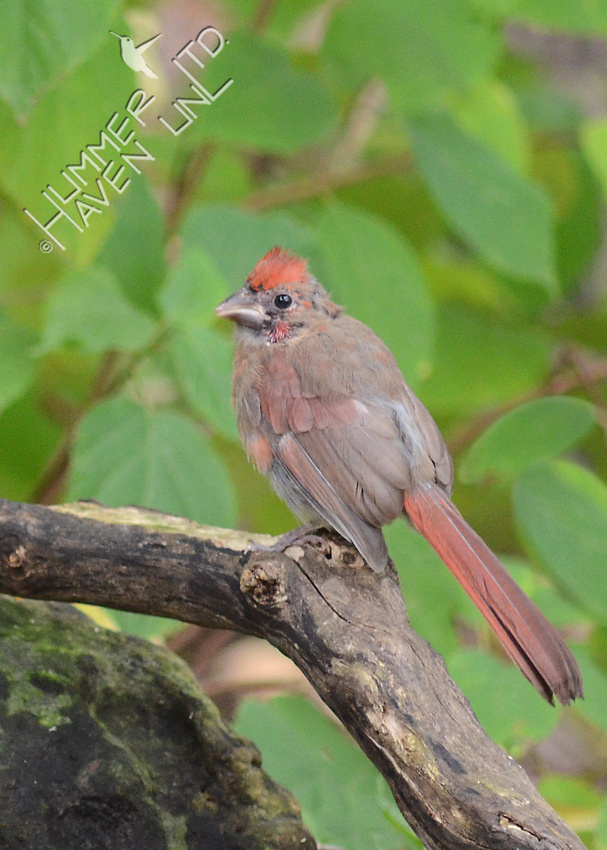 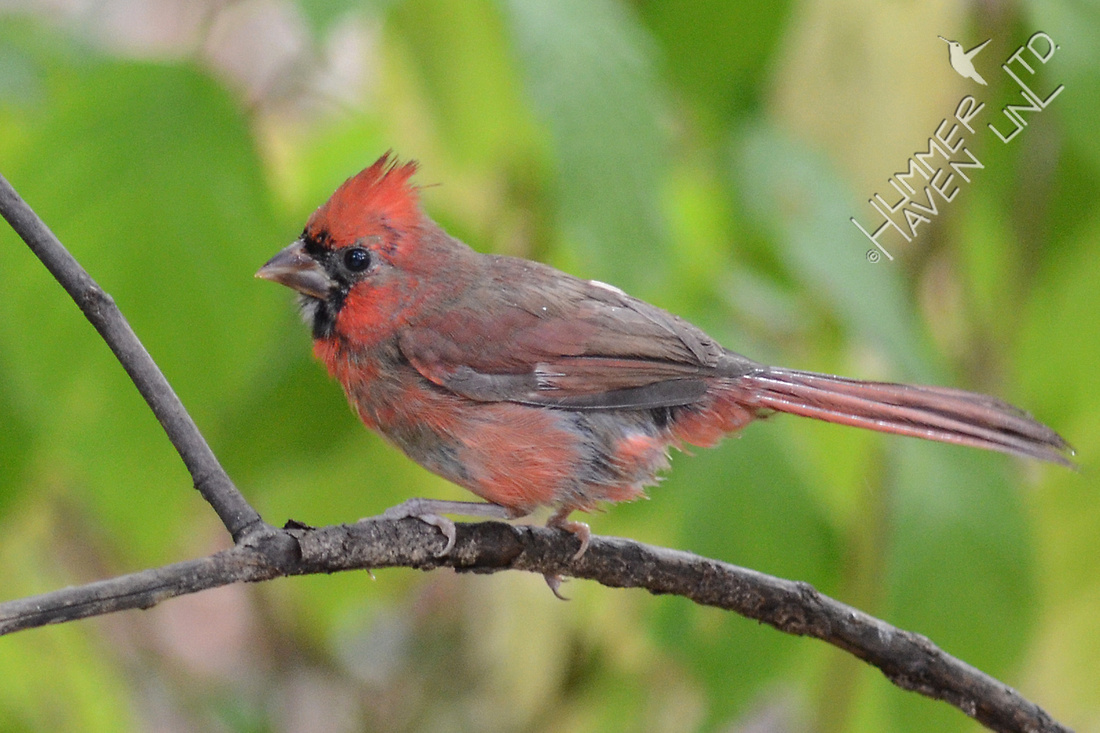 By mid-October, it was one of the locals. The little bird also had given me a new idea for the Holiday Card. Why not make a composite of photos showing how this specific little bird has been saved, rehabbed and released? Lynne agreed and after approval of the idea, Donna Short, one of the Board members and a volunteer at WBR, gave me a photo from "Sweetie's" first day when it was brought in as an orphaned fledgling at WBR on 8-29-15. It weighed only 19 grams or 0.67 ounces. Lynne wrote a beautiful synopsis of the bird's journey shown in the photographs, which were a tribute to the many people who played a part in the cardinal's successful rehabilitation.  It was included and we were all excited about this card. The response was very positive. Donna shared one note with me that said, "Your card showing the bird's rehab was delightful and so satisfying." It was rewarding to help in this small way with Wild Bird Rehabilitation's mission in assisting our native Missouri birds.

Fast forward to last week, when we had the opportunity to accept two young blue jays from WBR. They were brought into WBR on 6-28-16 and hand-fed until able to feed themselves. 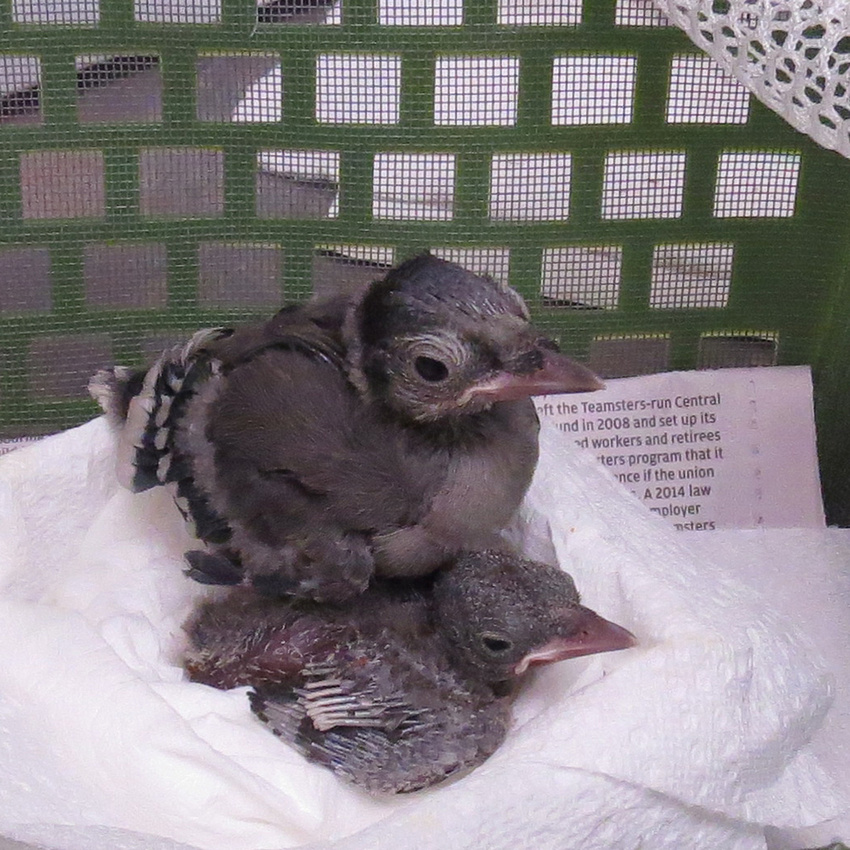 This photo was taken on 7/5/16. The birds were growing quickly. 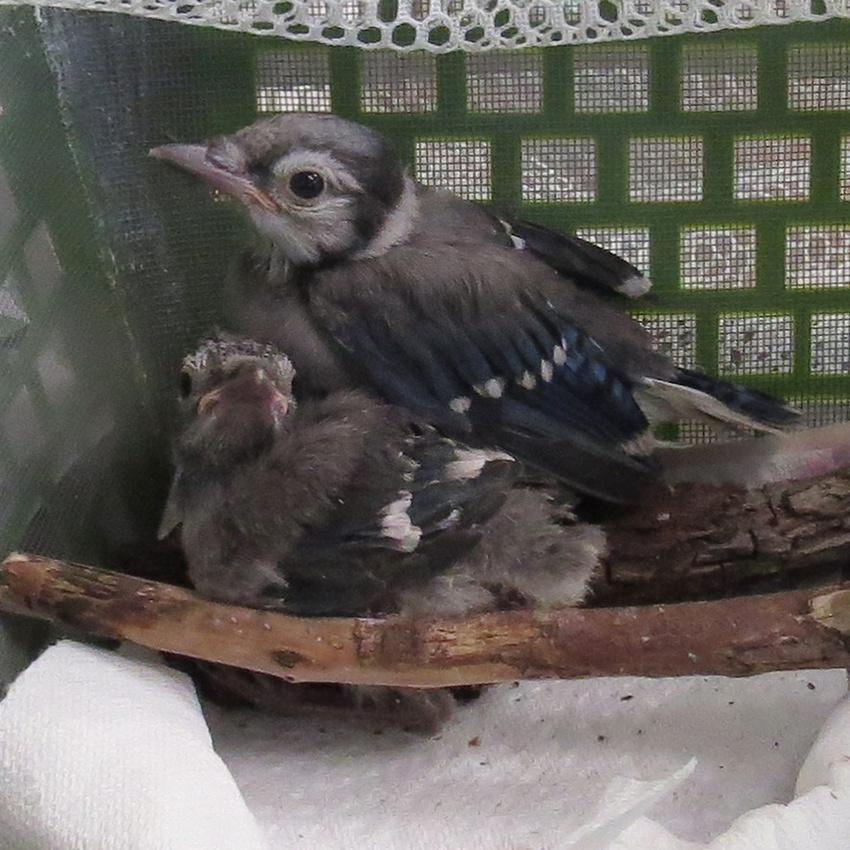 By 7/12/16, the little one had almost caught up with the older sibling. 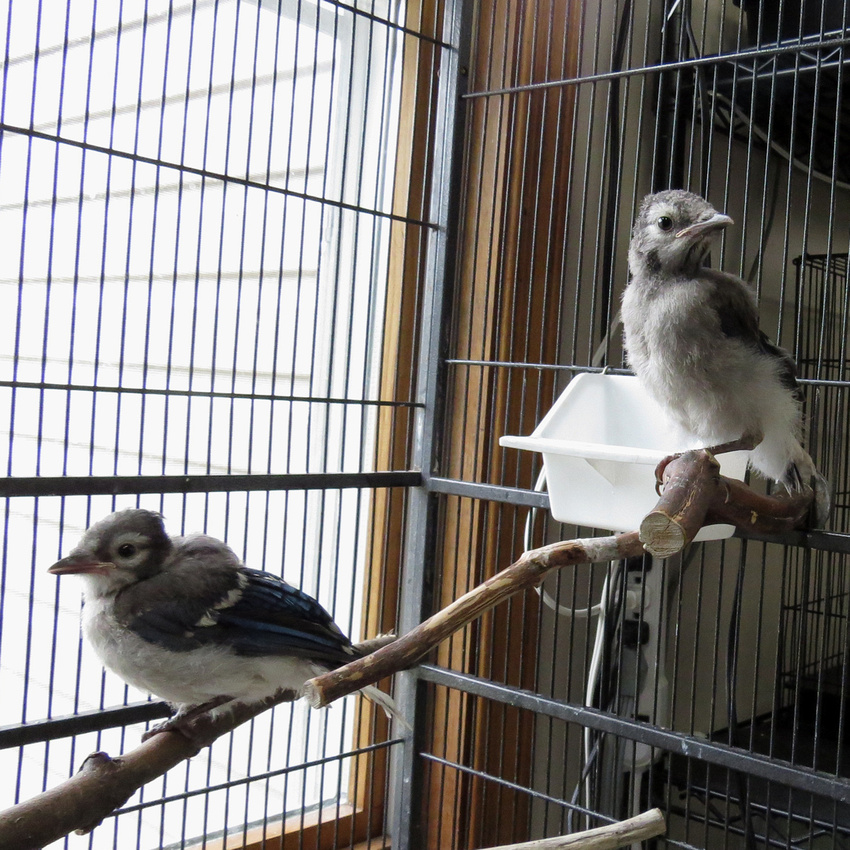 By 7/27/16, it was time to bring them to Shady Oaks. To add to the experience, our almost 4-year old grandson, Dean, was here to witness their release. Once again, Joan brought the birds in a covered cage and placed it on the deck. 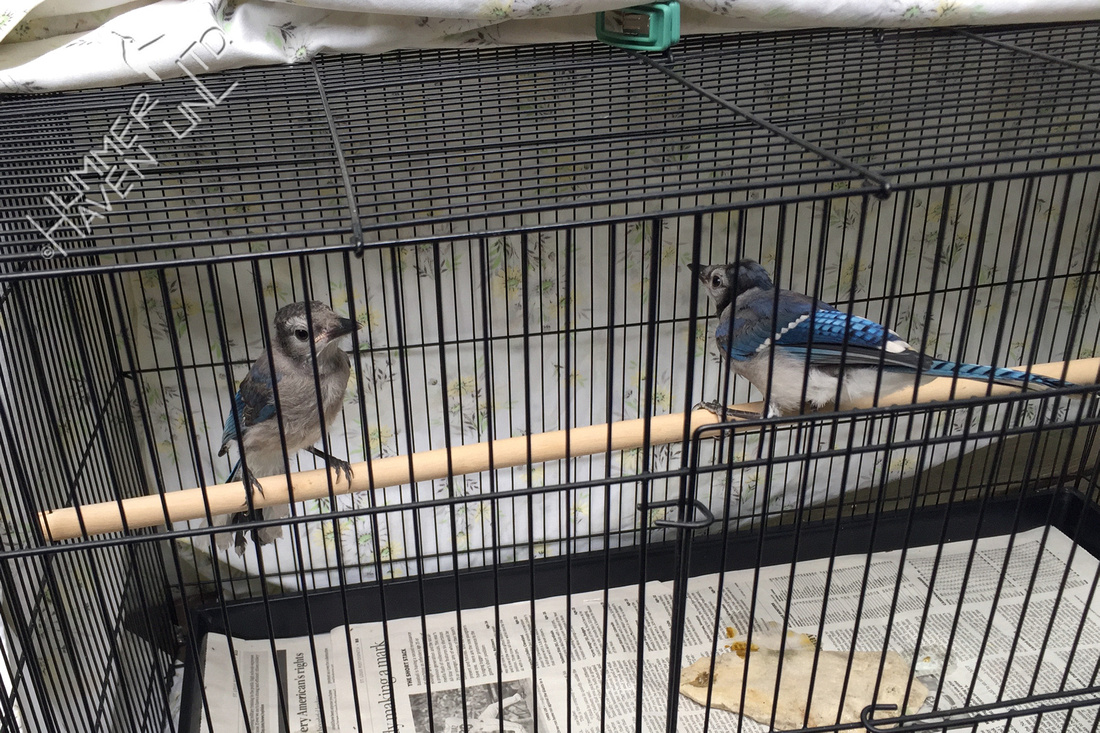 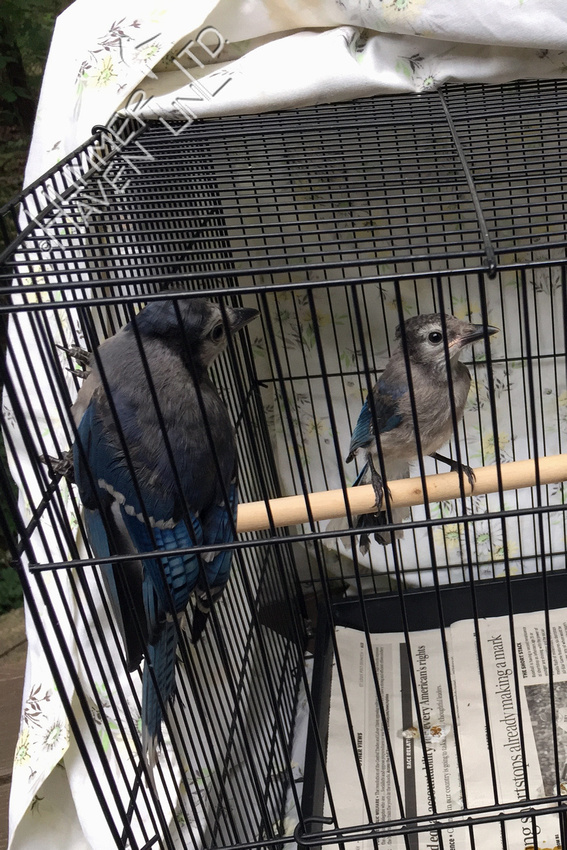 After we took a few photos, Joan turned the cage around and opened the larger doors. We watched as the birds exercised their wings. Dean had the best view! 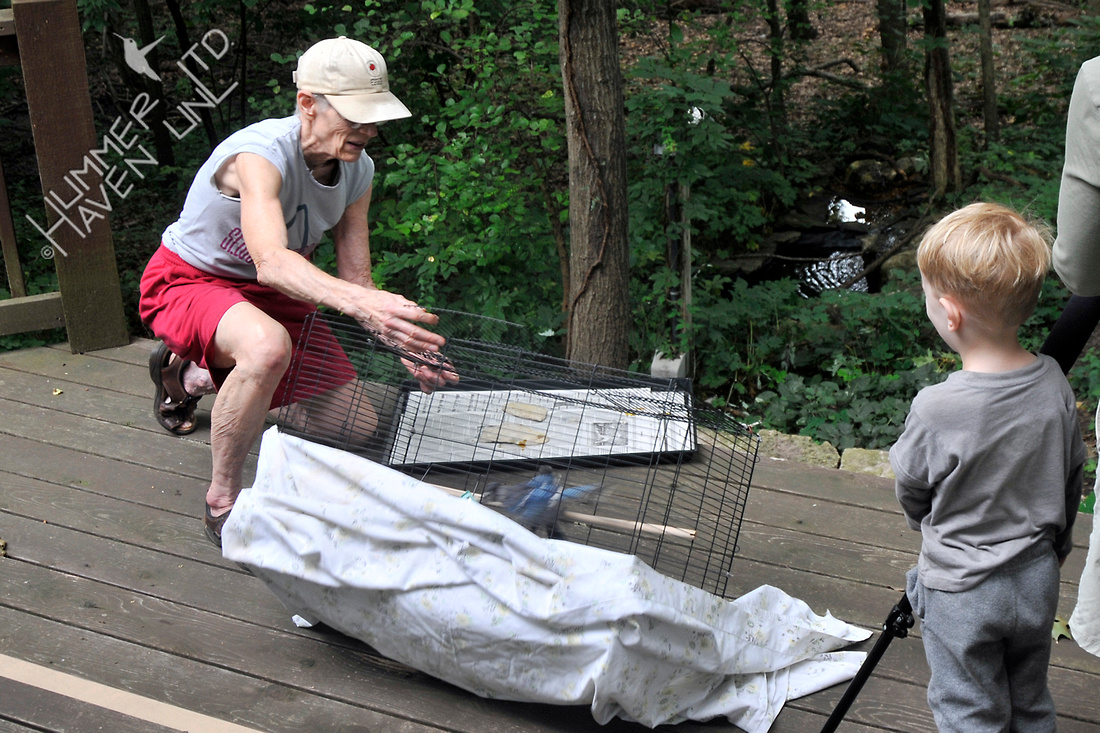 The older one took off like a shot, leaving the younger sibling to figure things out by himself. "It's okay, little blue jay! You can fly!" said Dean. 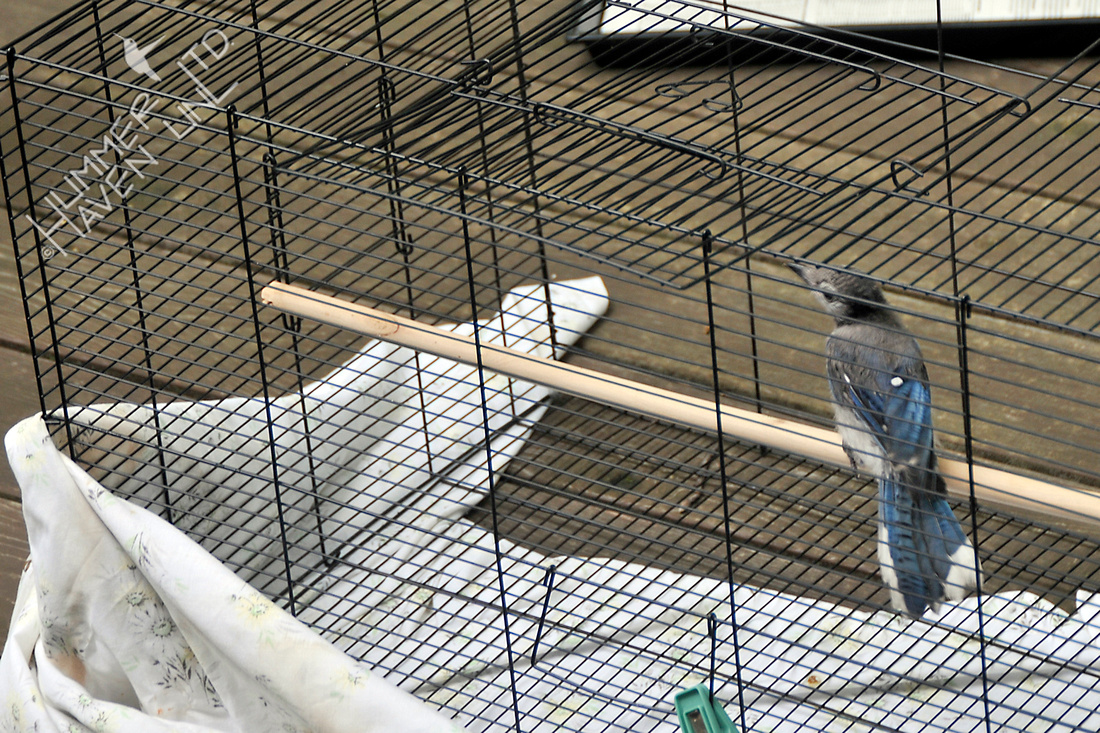 The younger bird flew out into some dense cover and called a few times to its sibling. 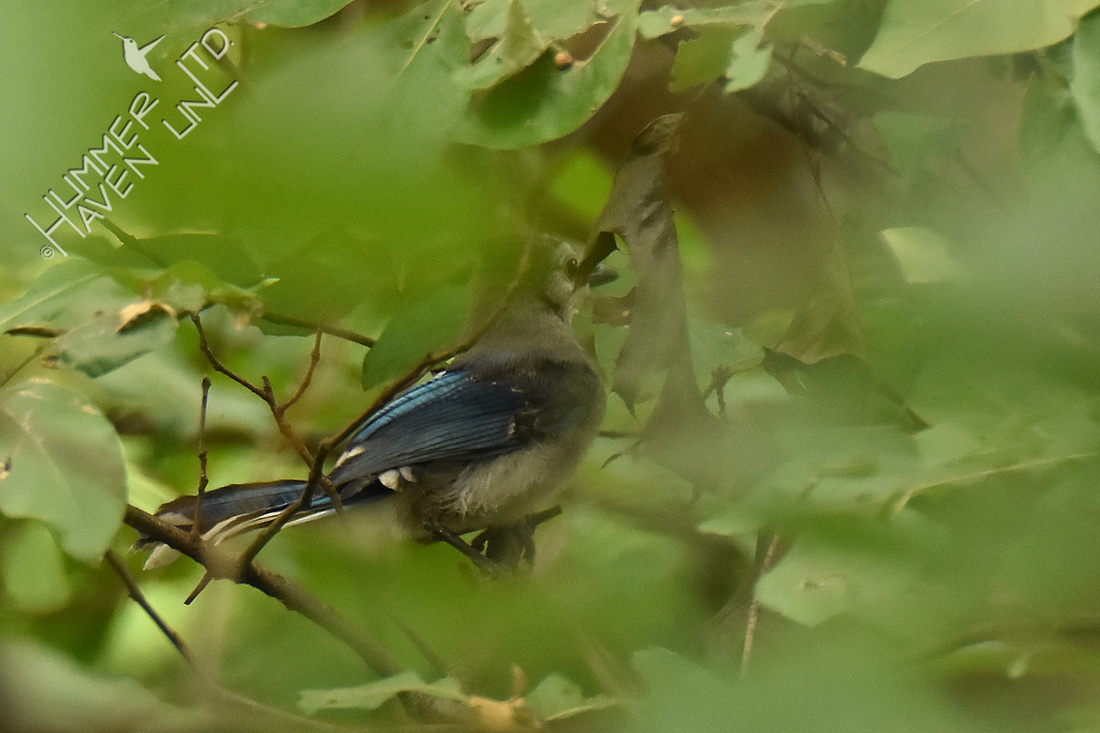 The older bird came back after a minute or so, and preened its feathers. All in all, it was a successful release. 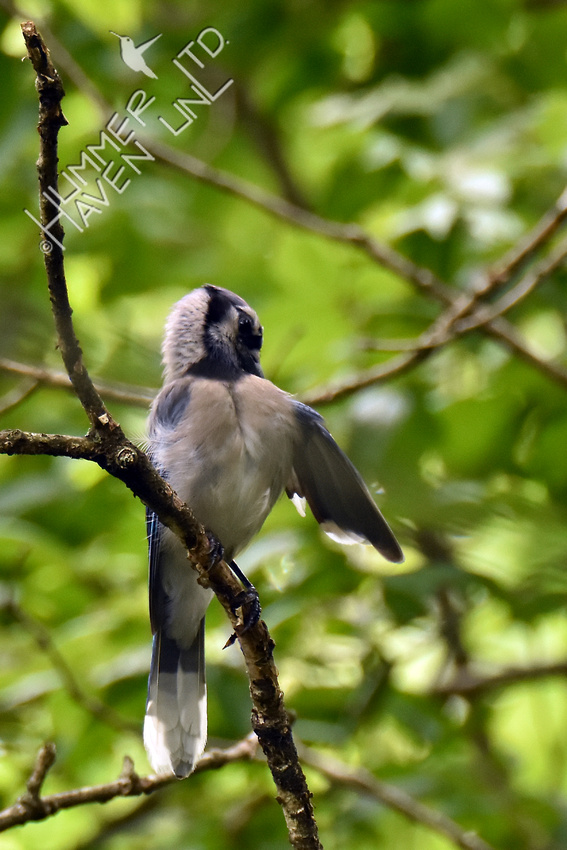 We hope to get a few more photos as the birds adjust to life here at Shady Oaks!