Thursday, New Year's Eve day we had 25 species of birds here, a very good winter day count. Sometimes, you've got to kiss a lot of toads before you find your prince. That is, there were more House Finches than you could shake a stick at. They kept upending each other at the feeders and squabbling over perches. It was cold and getting colder, everyone was hungry. About lunchtime, I was watching them and then did a double-take. We've got a male Purple Finch! No, there are two! One perched above the female Northern Cardinal. 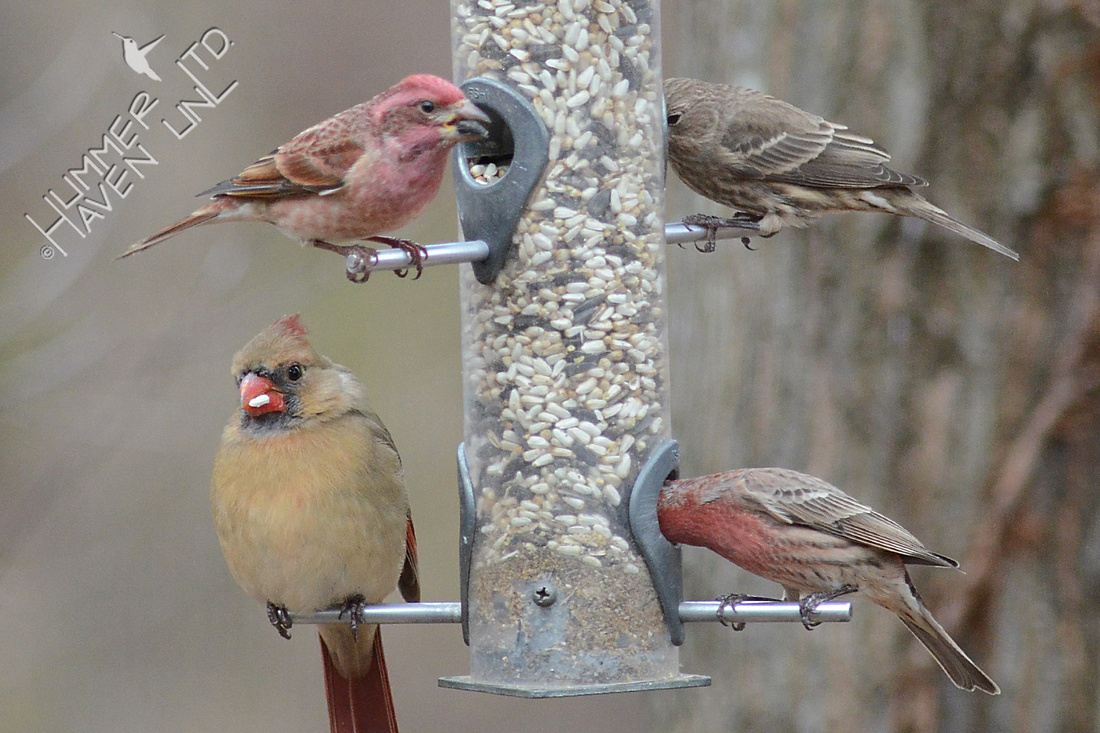 It has been years since I've seen males and this is the first time I've been able to photograph them. It was a feeding frenzy, but they stayed in the fray. The Purple Finch is on the lower right. Its crown is rosy, not brownish like the House Finch's above it. 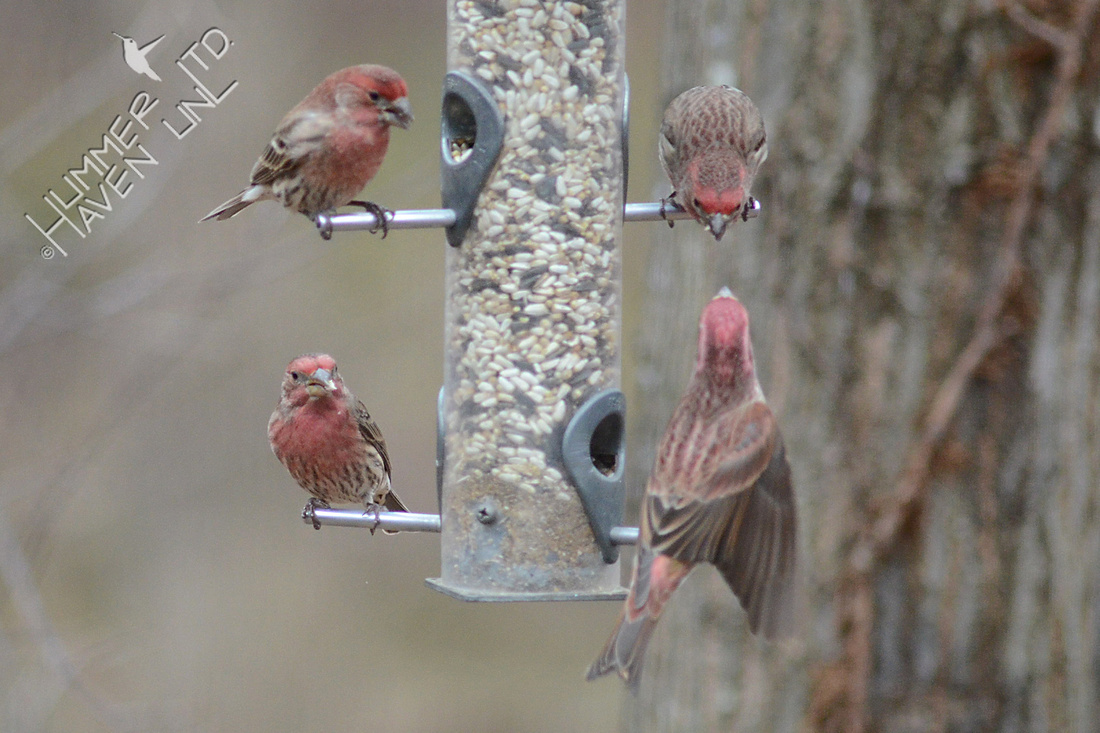 The Purple Finch is on the lower left now. The differences might seem subtle. Color is a bit lighter, a brighter raspberry wash, with no streaking on the breast or sides. 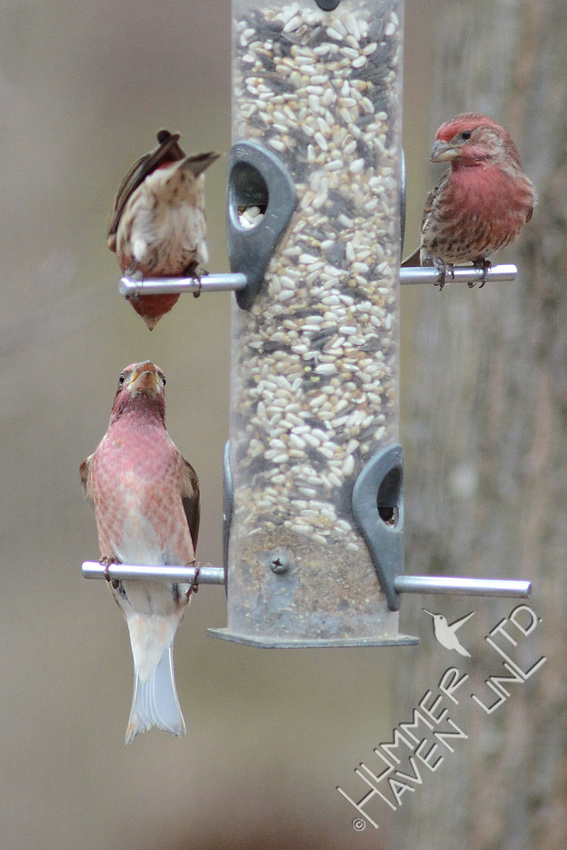 Still on the left, now the differences on the facial pattern emerge, ear patch is more defined, head is slightly larger, bill is thicker. There is a warmer pinky brown to the wings. 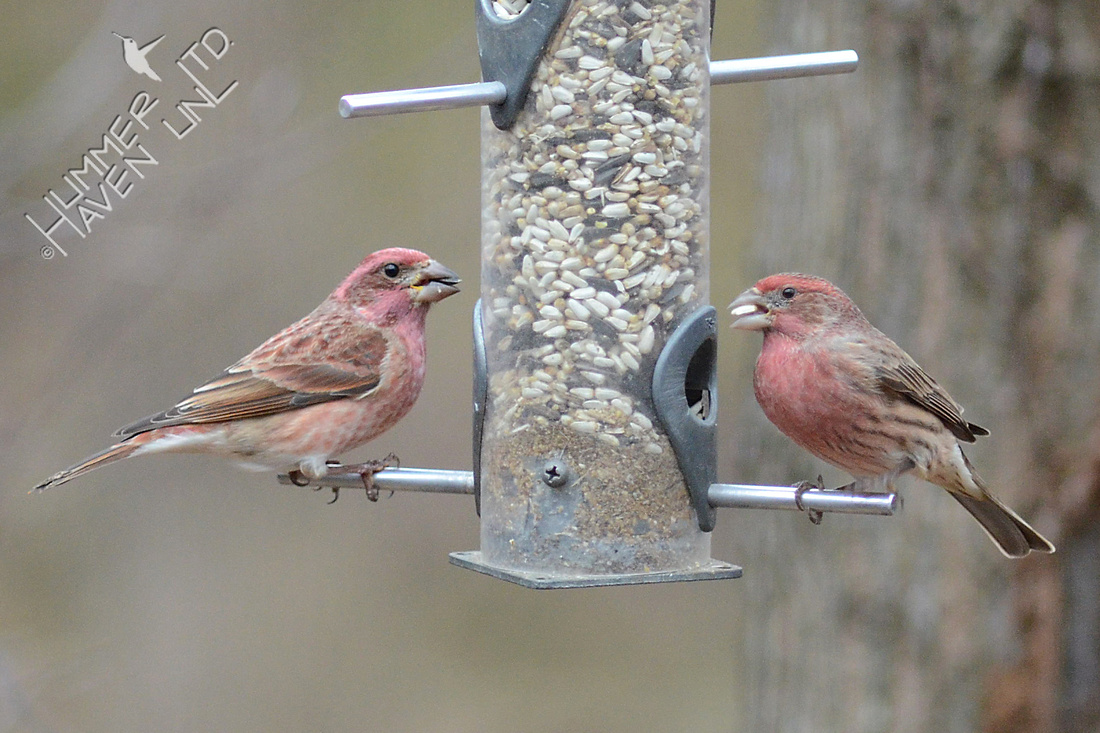 One male was more deeply colored than the other, perhaps an older bird. 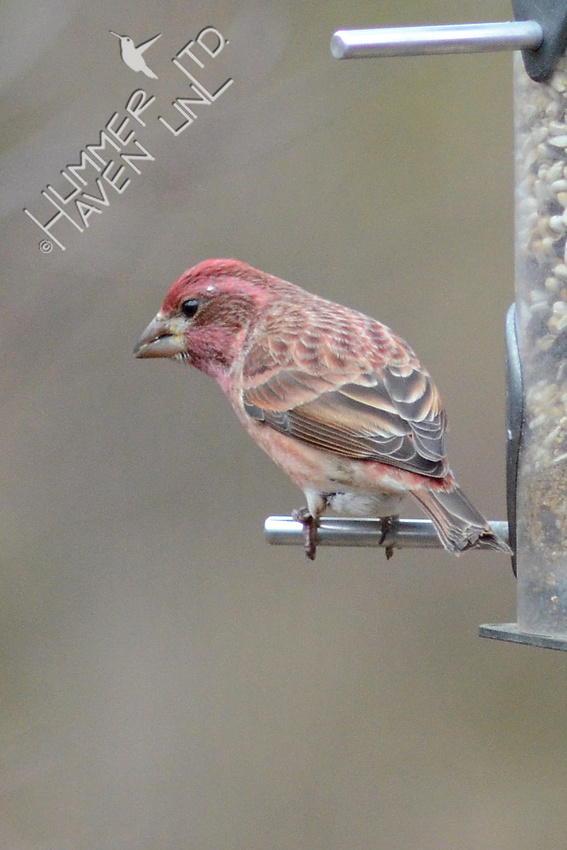 The deeply colored male also raised his crown feathers, a bit like the Northern Cardinal's crest. (This cardinal is lacking some pigment in her feathers.) 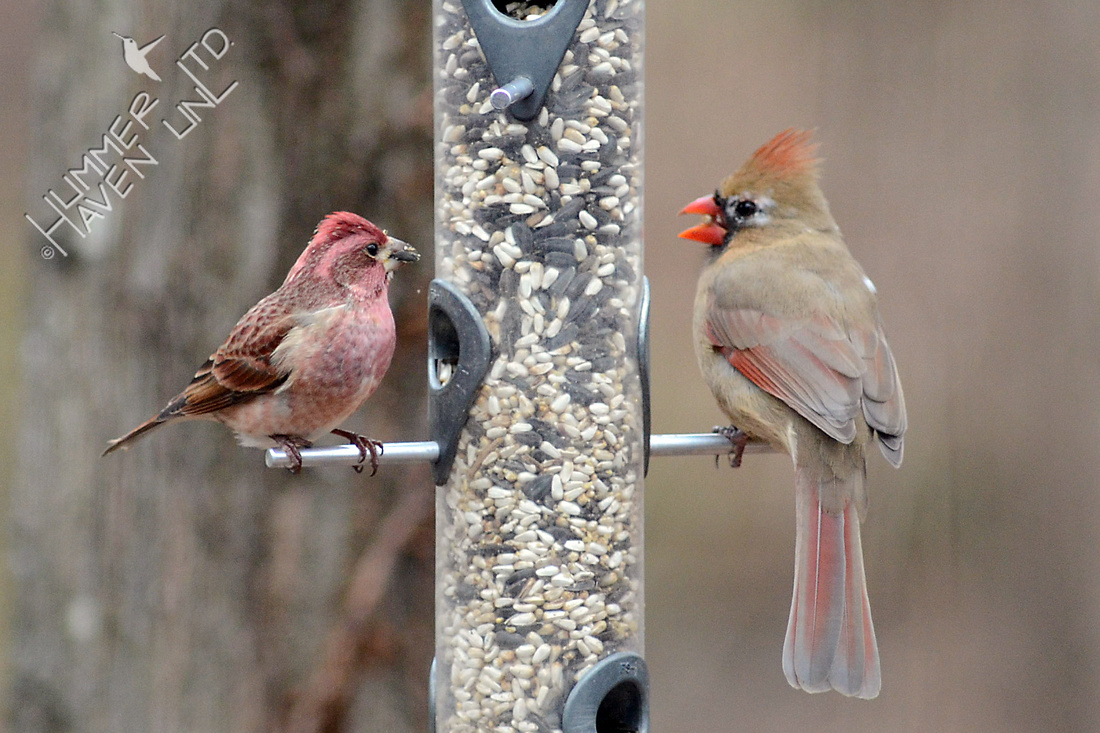 The birds continued to squabble. There is much variation in House Finch plumage and you can see the even deeper reddish tones in the bird that hovers. 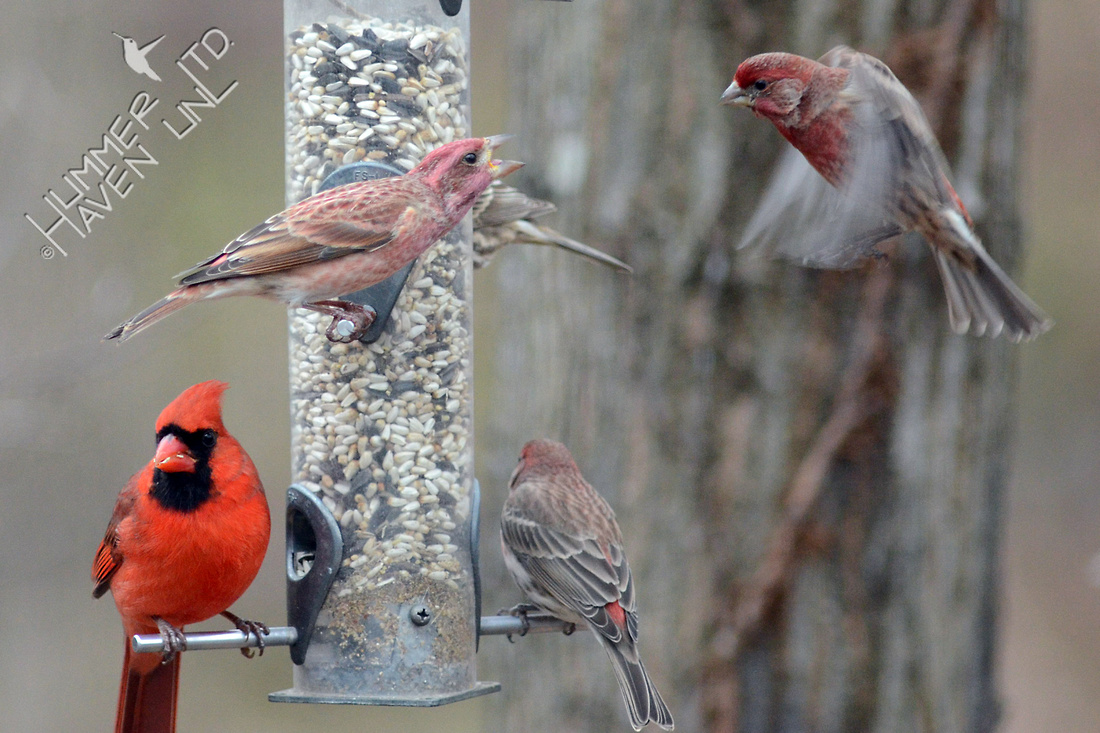 So, uncommon male Purple Finches arrived to end the year, but would they stick around to celebrate a new year? Yes, one came to the feeder early, about 7:30 before a few House Finches came in. He gobbled some seed for about ten minutes and then I never saw him the rest of the day. 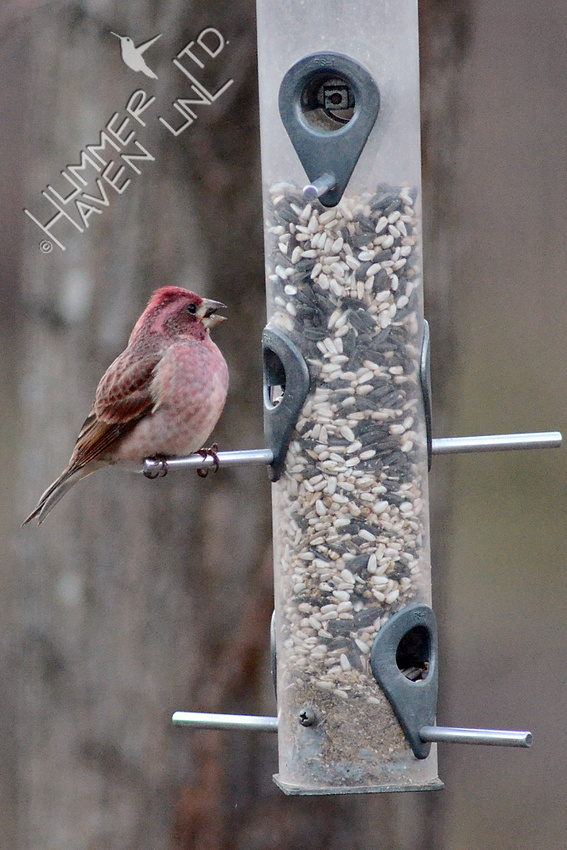 Birds were very skittish and did not come in like they had the day before. I confirmed my suspicions around 3:30 when a Coopers Hawk landed in one of the large oaks. After it moved on, a Carolina Wren decided the fountain was the place for its bath. Happy New Year! 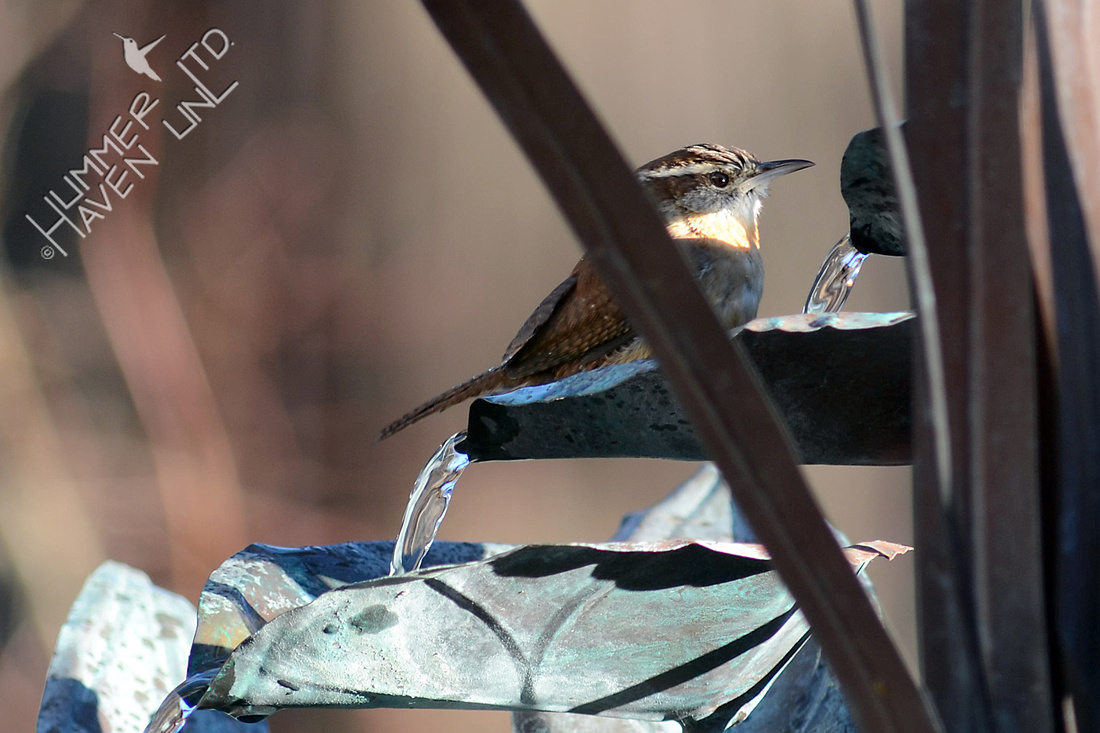 Carolina Wren bathed in the fountain