The week began with Saturday's flock of Rusty Blackbirds. At first, twenty hungry birds were foraging in the leaf litter. Then there were 40, then double that again, a conservative estimate. We have seen this many before a few times, but it was an amazing sight with movement everywhere in the garden beds on two sides of the yard as well as in the swampy thicket. This is a female Rusty Blackbird. 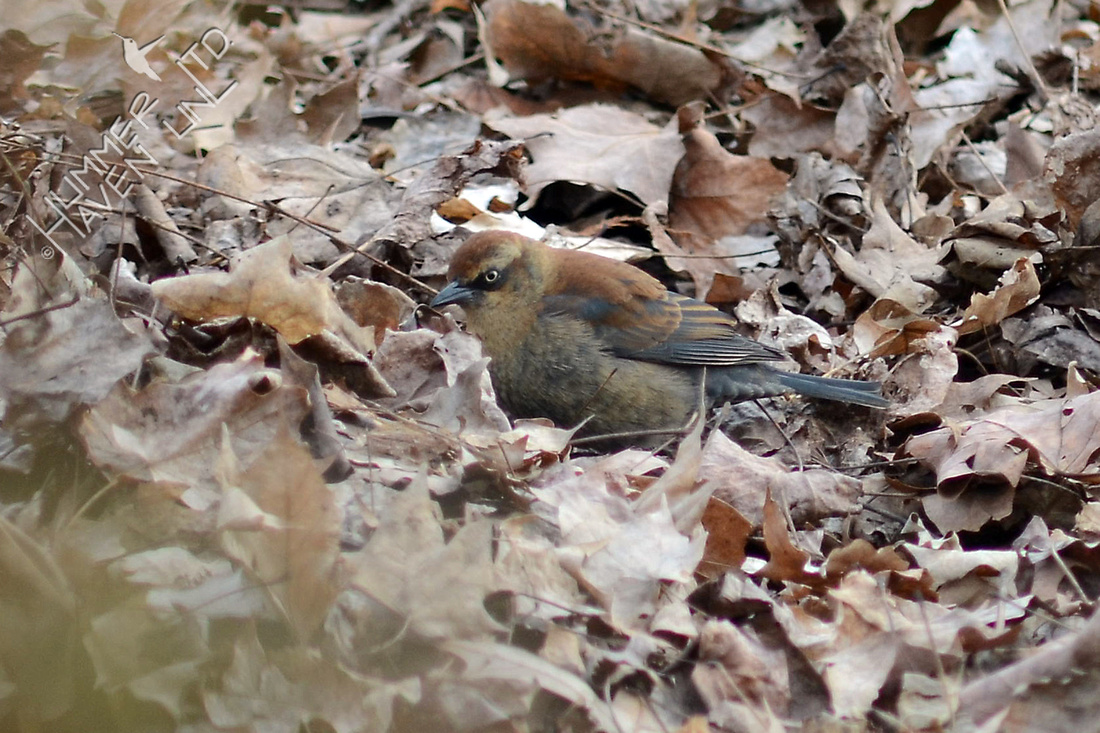 Here are two males. Moths and insects overwinter in the leaf litter and provide needed protein. 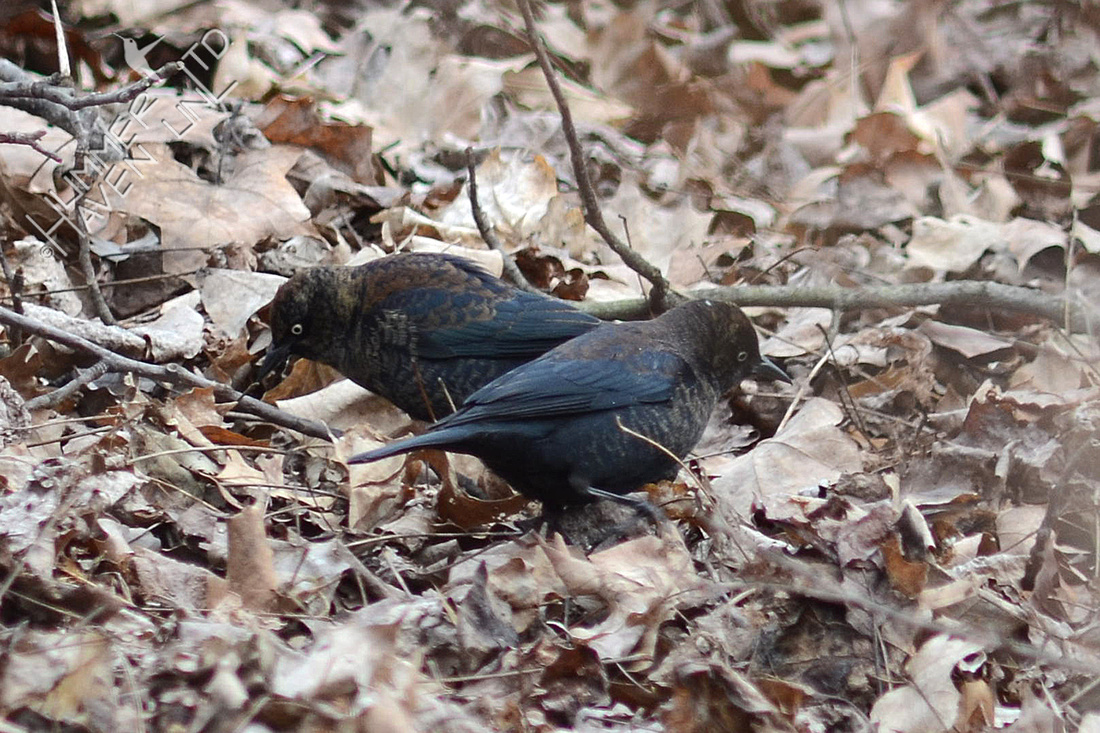 The birds worked the lawn as well and the bird on the right has a small slug in it's bill. Since our lawn is not treated with chemicals, hopefully, any food they find is safe for them to eat. 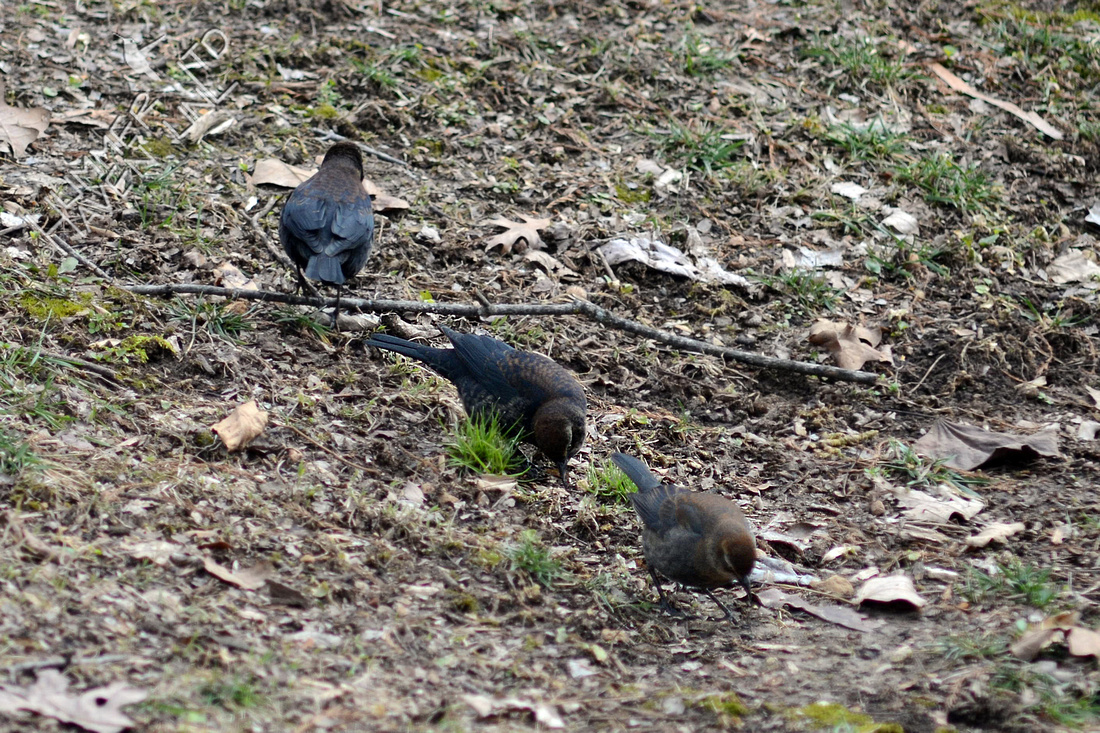 This activity went on for about an hour before the whole flock took off and flew to the west. A Carolina Wren found food in the leaf litter, too. It's chestnut camouflage is ideal. 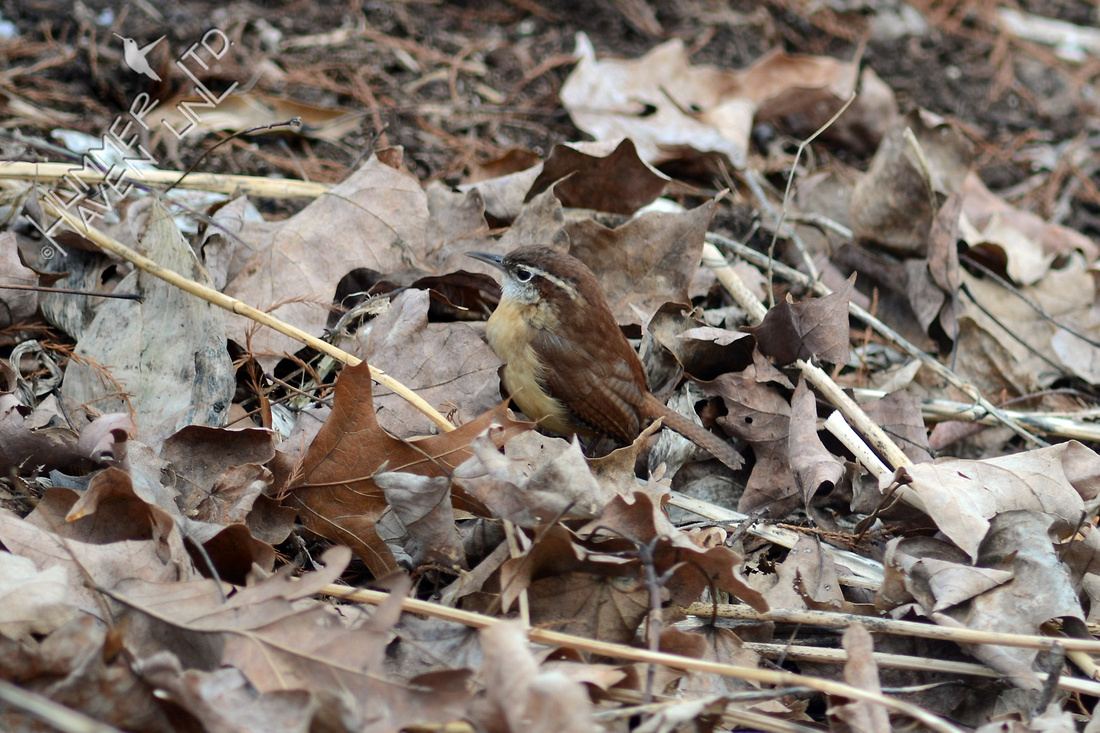 A female Purple Finch has been here off and on this week. I only managed to get one photo as it perched in a Blackhaw Viburnum.  I have not seen it at any feeder but the bird has been at the bubbler several times a day for water. 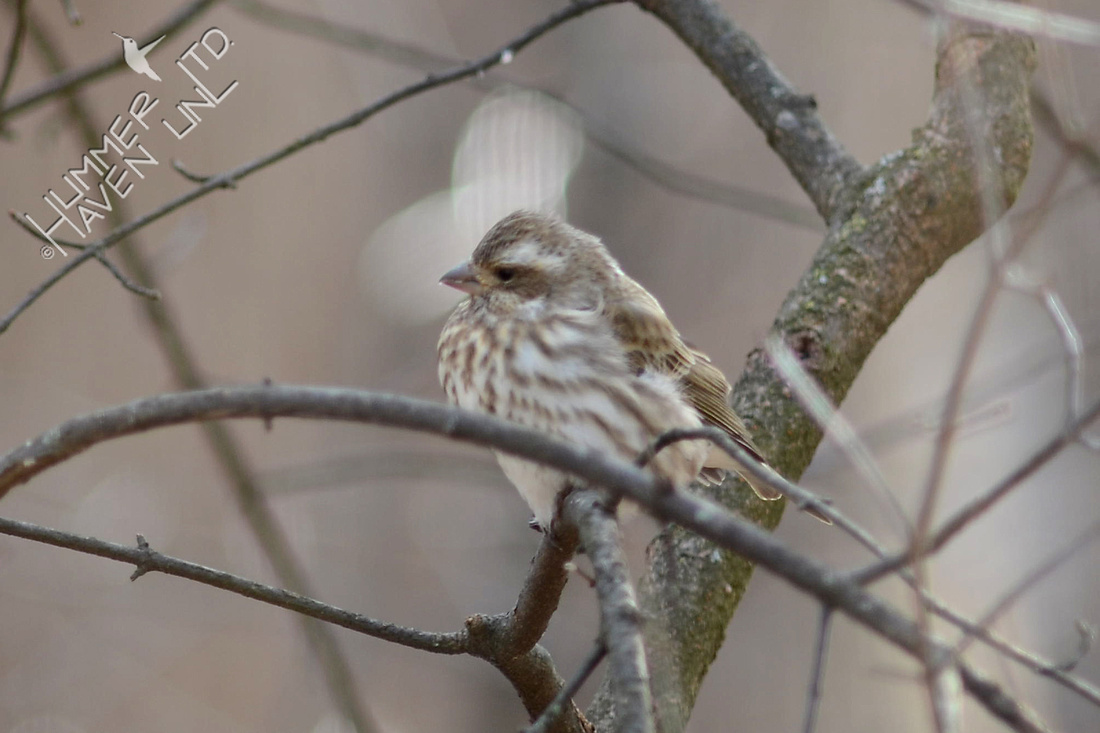 Here are female House Finches for comparison. The brown ear (auricular) patch defined by white borders above and below point to a Purple Finch. House Finches are dull brownish little birds. 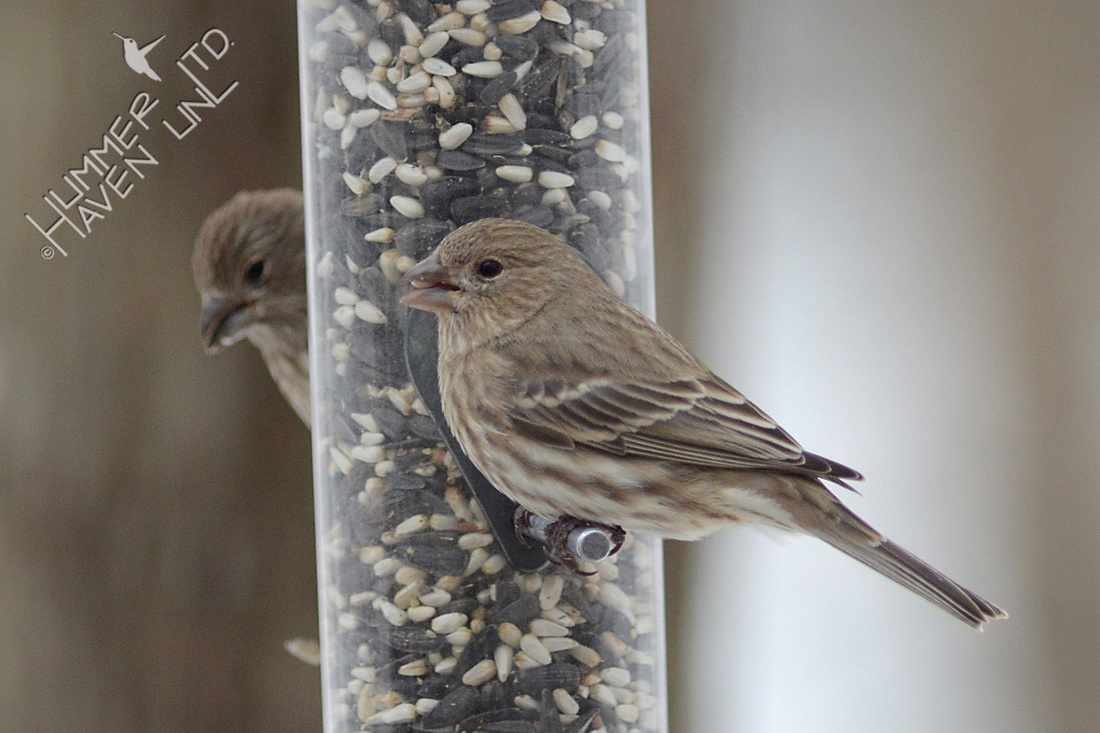 I also have this photo to show how much male House Finches can vary in color. The one on the lower right is an Orange Variant. 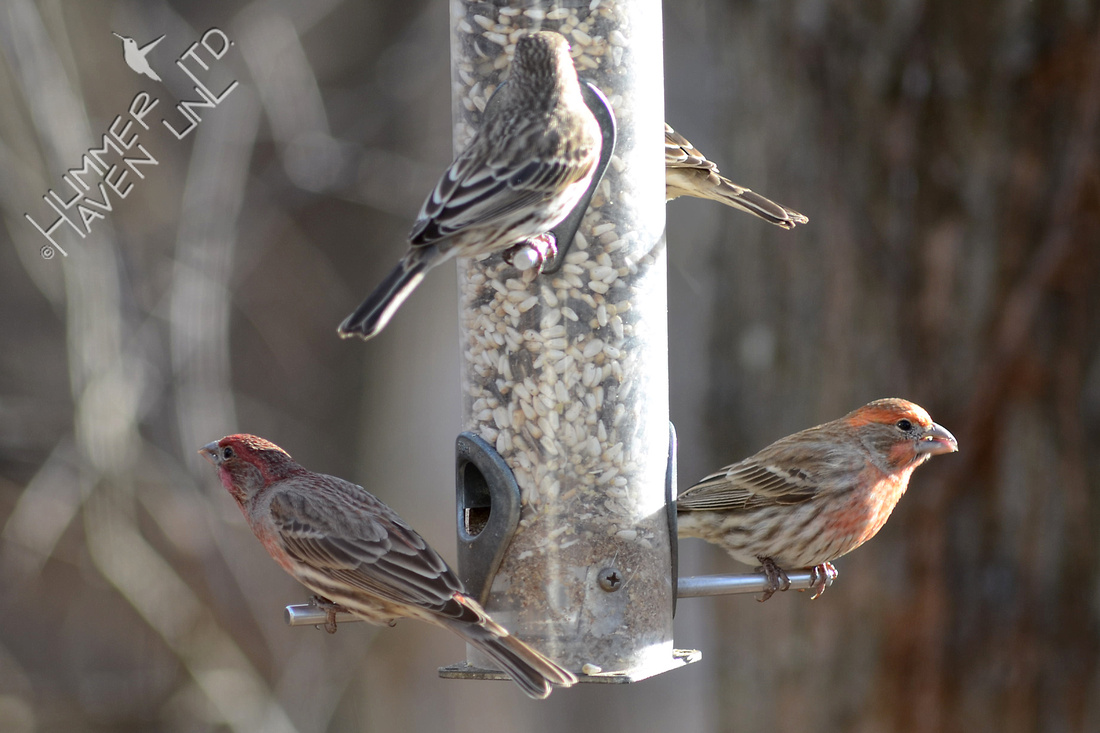 We had a dusting of snow on Sunday and birds like this Mourning Dove took breaks from feeding to fluff up and keep warm in the cold. 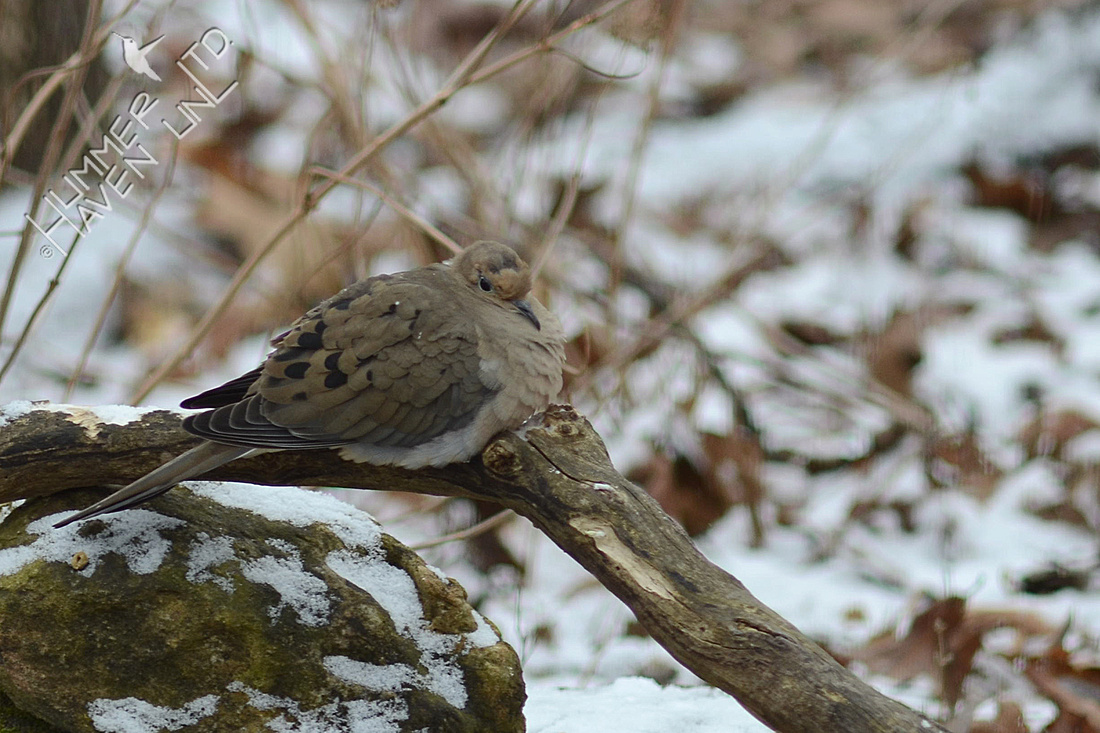 We had another few inches of snow that began on Tuesday afternoon and ended in the wee hours on Wednesday morning. The bubbler was a real hub of activity all through the day on Tuesday. I counted 27 species that day and 21 of those came to drink, like this Red-bellied Woodpecker. 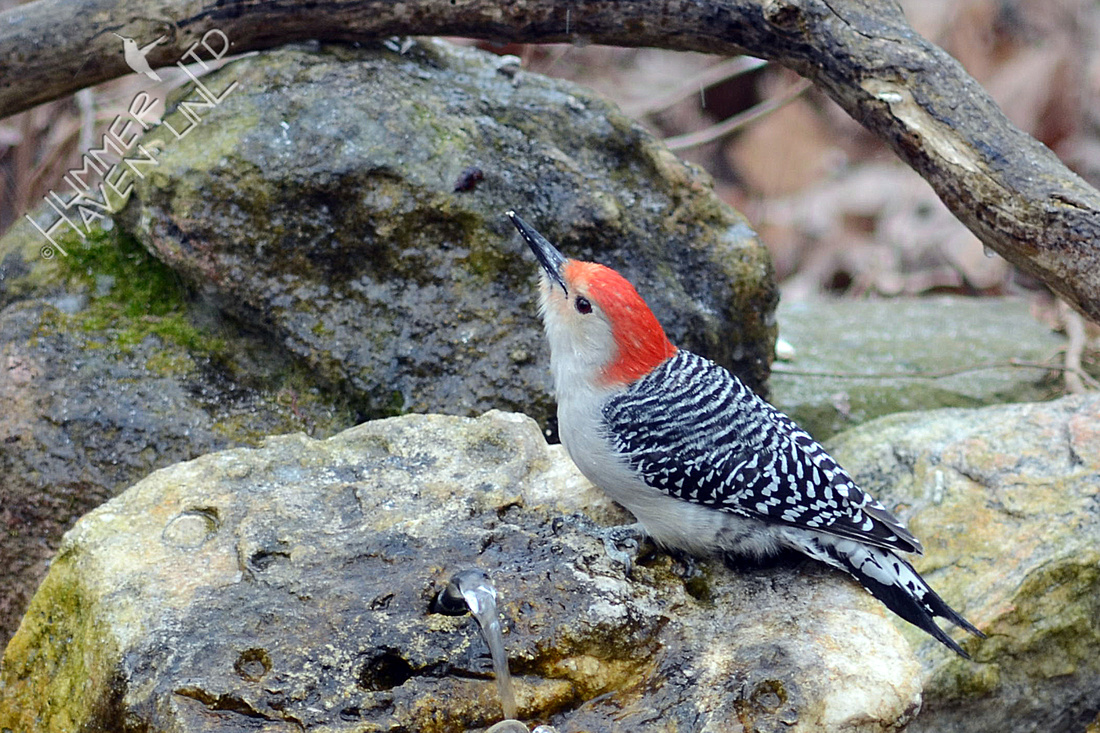 A large flock of American Robins descended upon the woods and again the leaf litter was alive with movement as the snow began to fall. 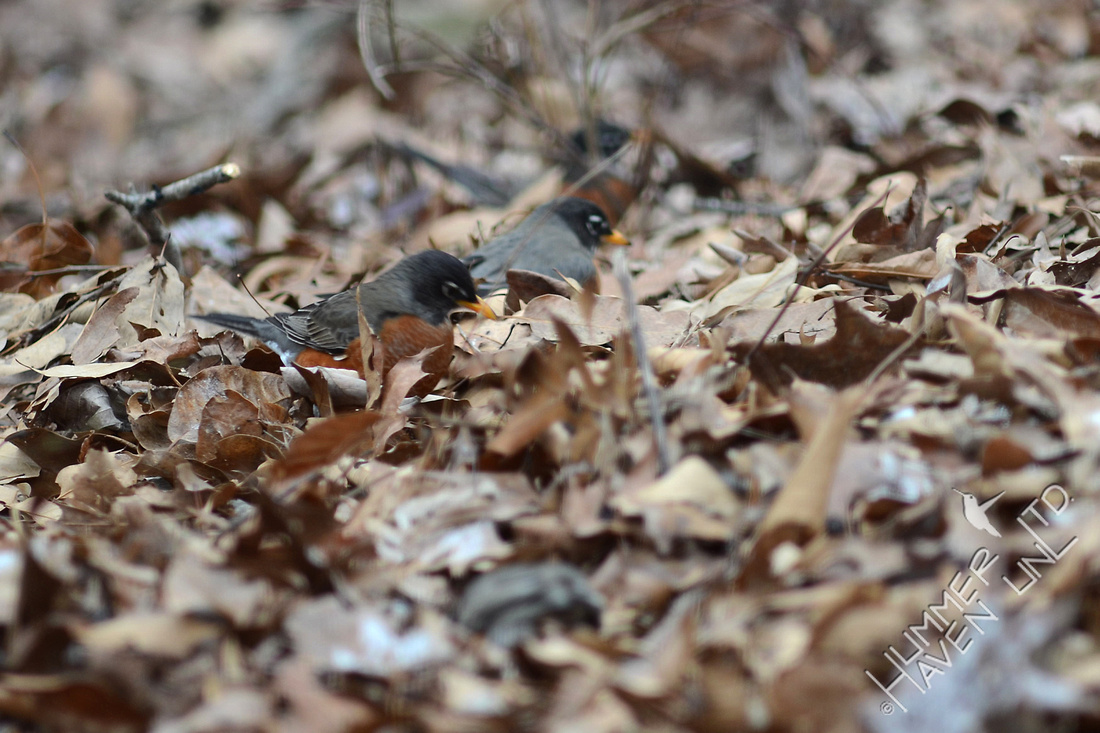 The garden textures changed by morning, as seen with these purple coneflowers adorned in snow. 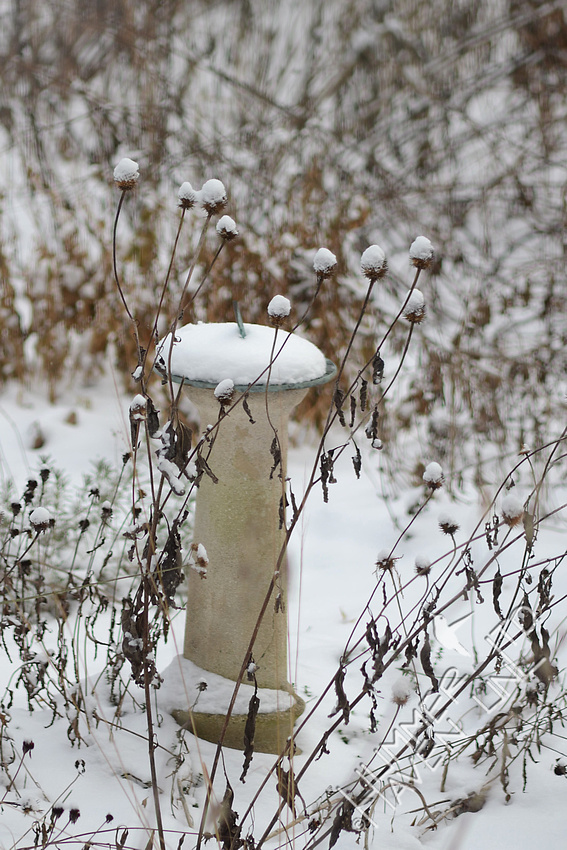 A single Rusty Blackbird lingered all day, resorting to cover under one of the Christmas trees we had staked near the feeders. 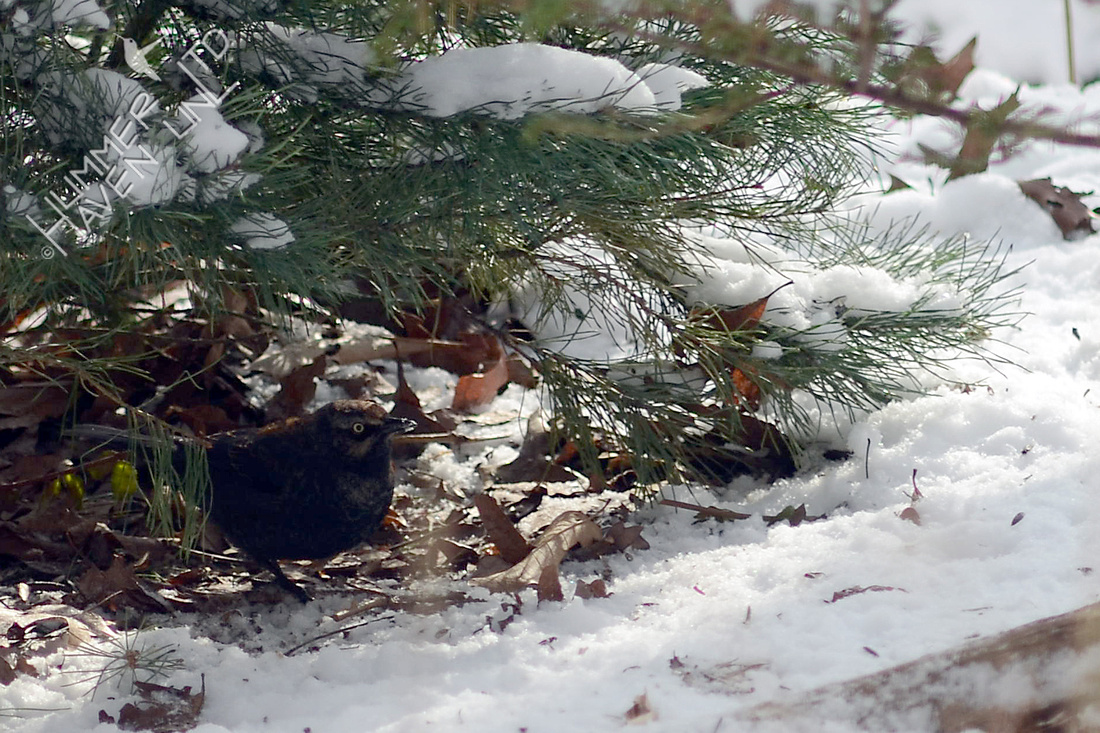 Rusty Blackbird under the Christmas Tree 1/20/16

Two Rusties were here again early this morning at the bubbler. 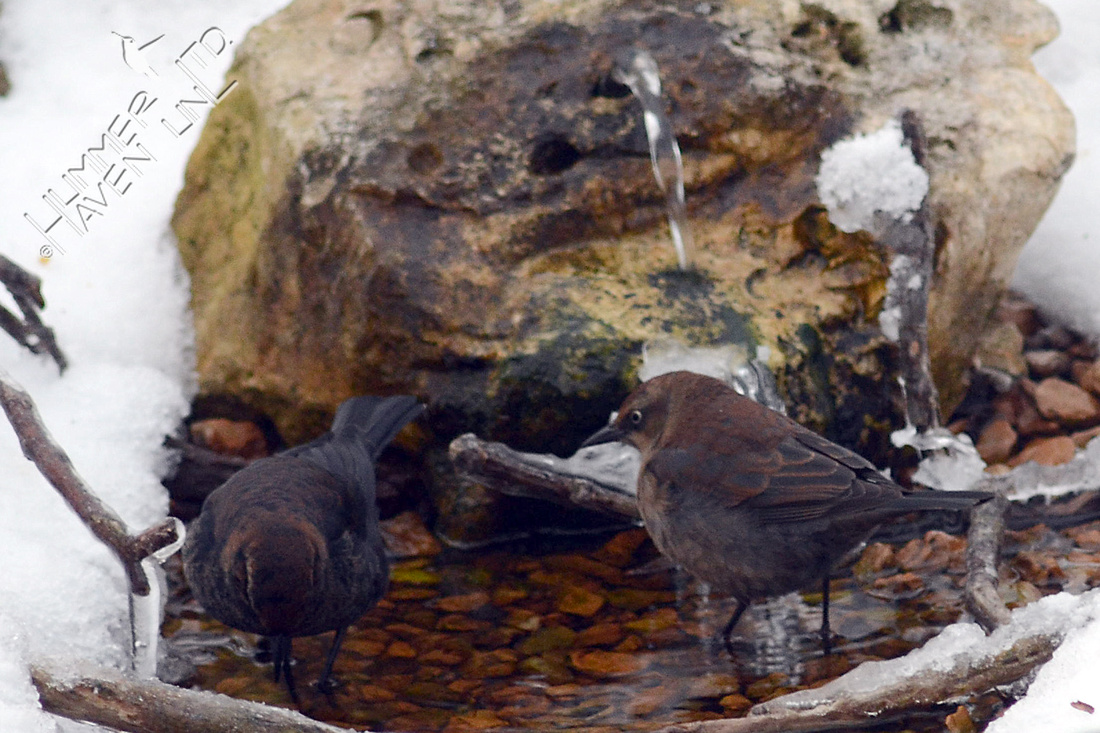 A Yellow-rumped Warbler came in the afternoon hoping for a bit to eat and drink. 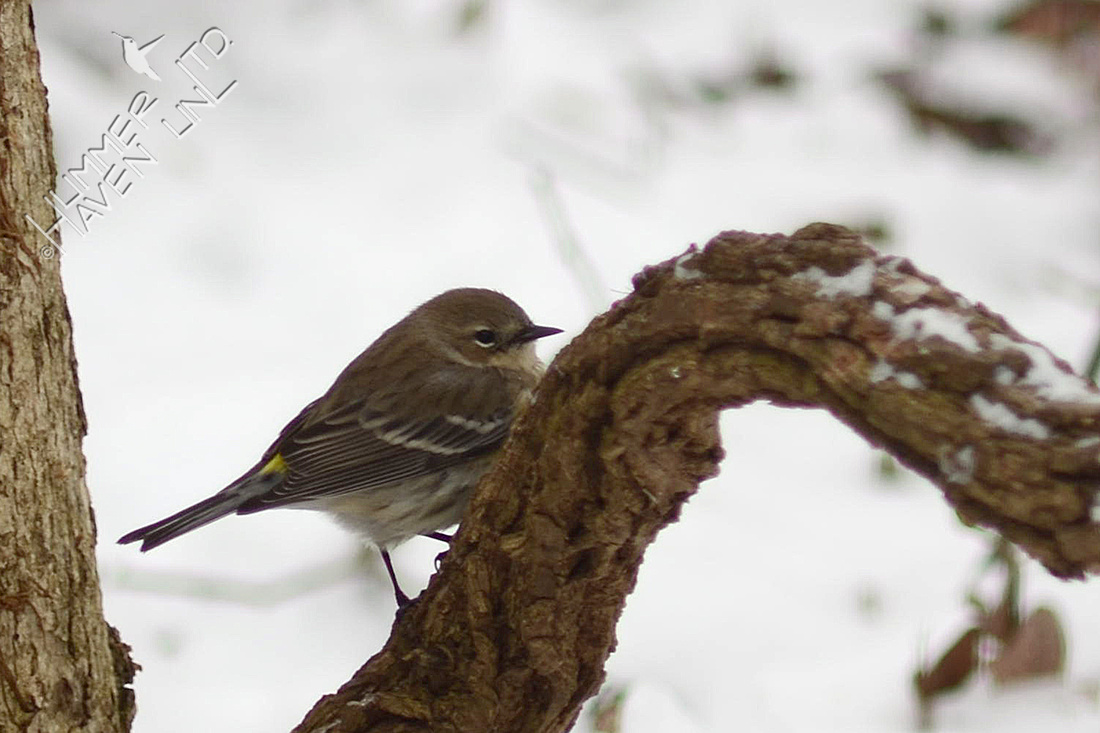 One or two Pine Siskins have been seen almost every day as well. Yes, it has certainly been a busy week. 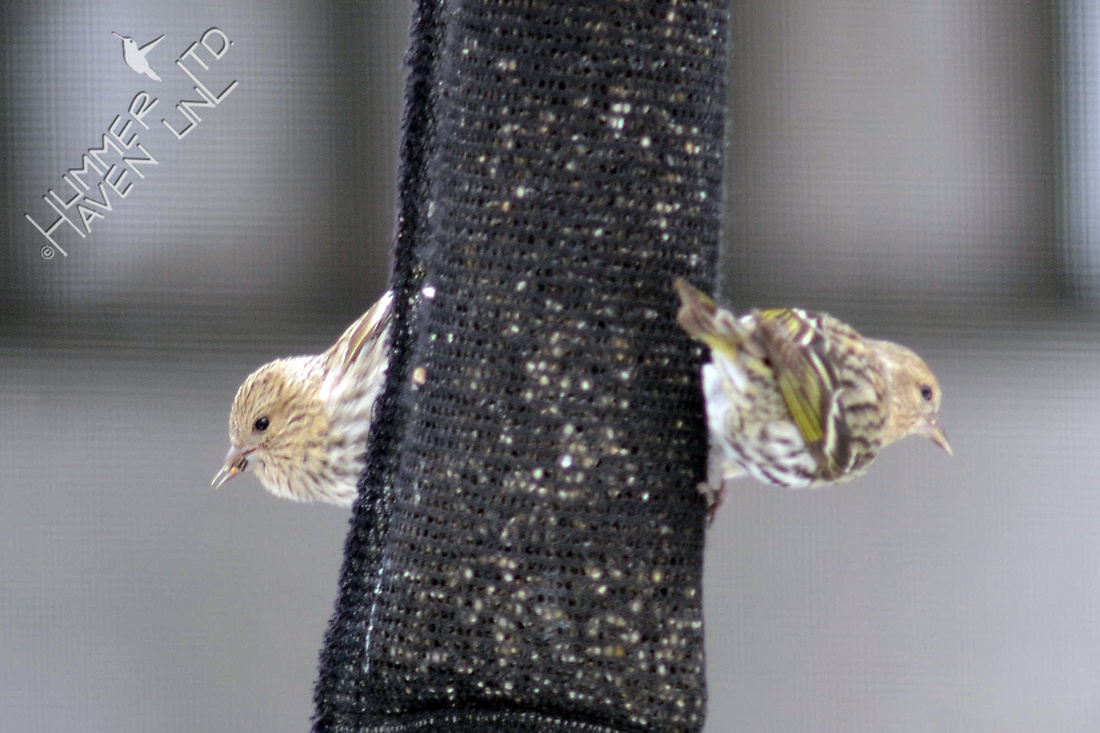